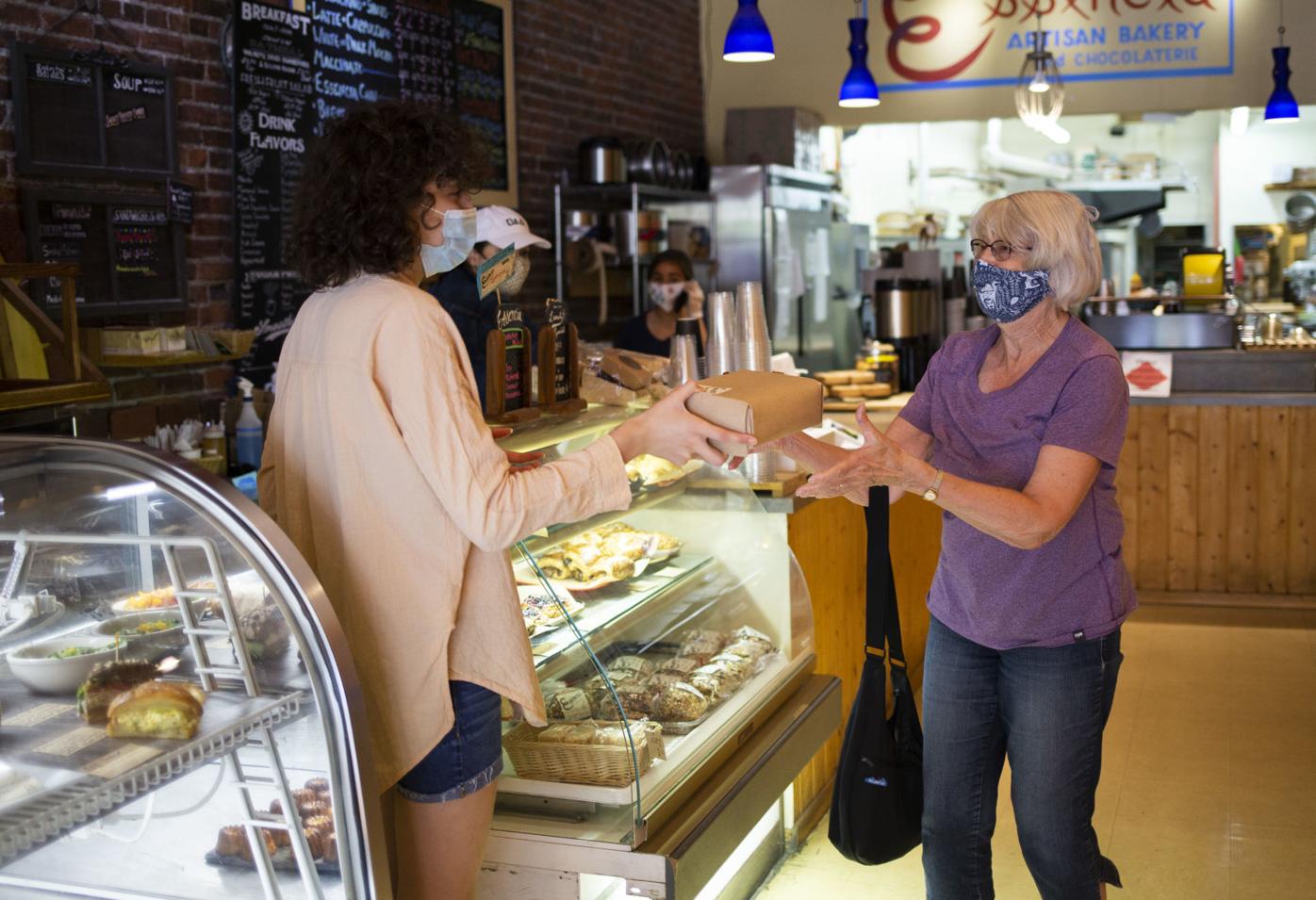 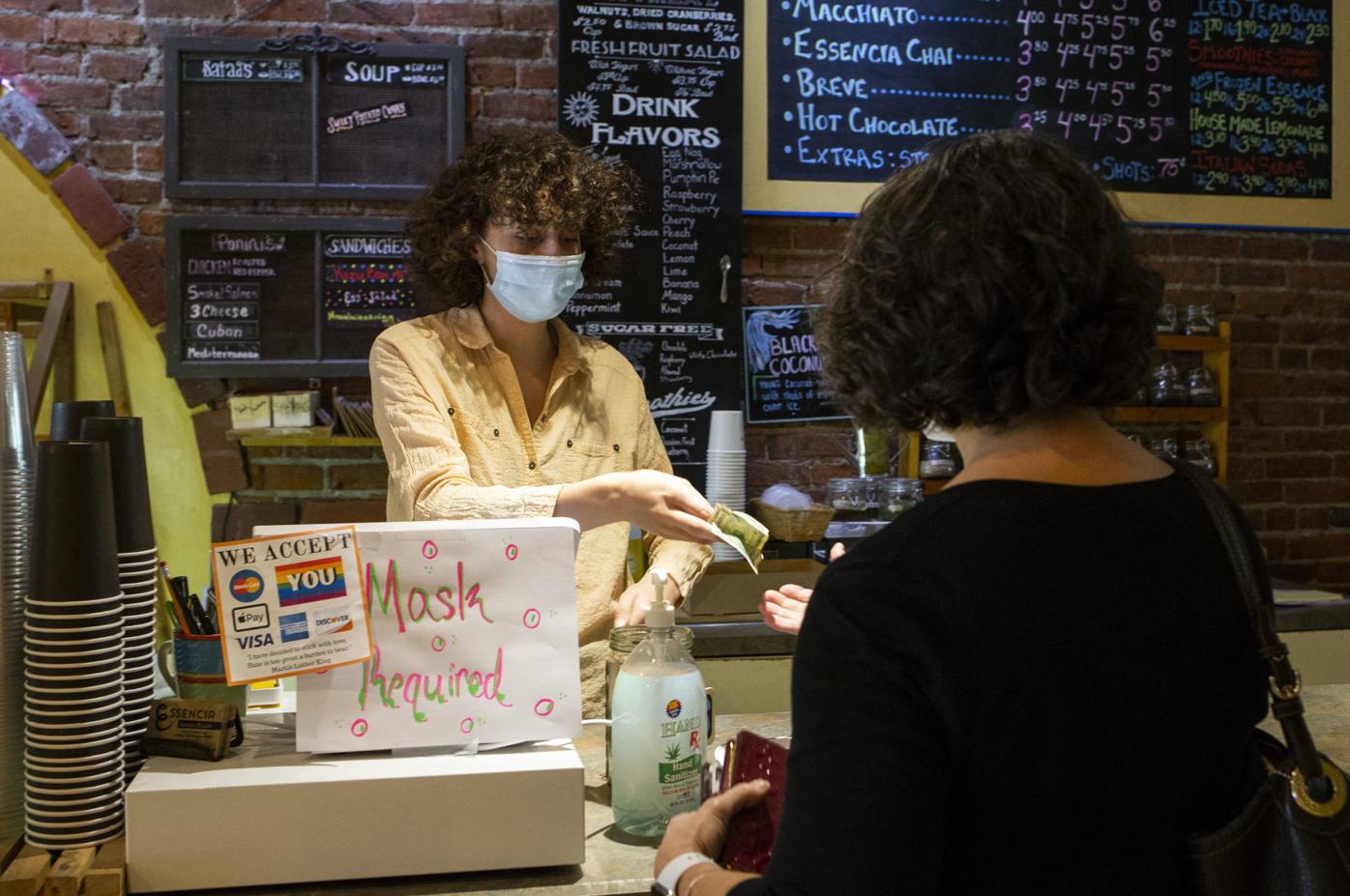 FILE — Essencia Artisan Bakery employee Nyah Cruz, left, counts out change for customer Cynthia Martinez, right, on Tuesday, June 23, 2020, in Yakima, Wash. Signs at the front entrance and the register notified customers that masks are required to have masks on while in the store. 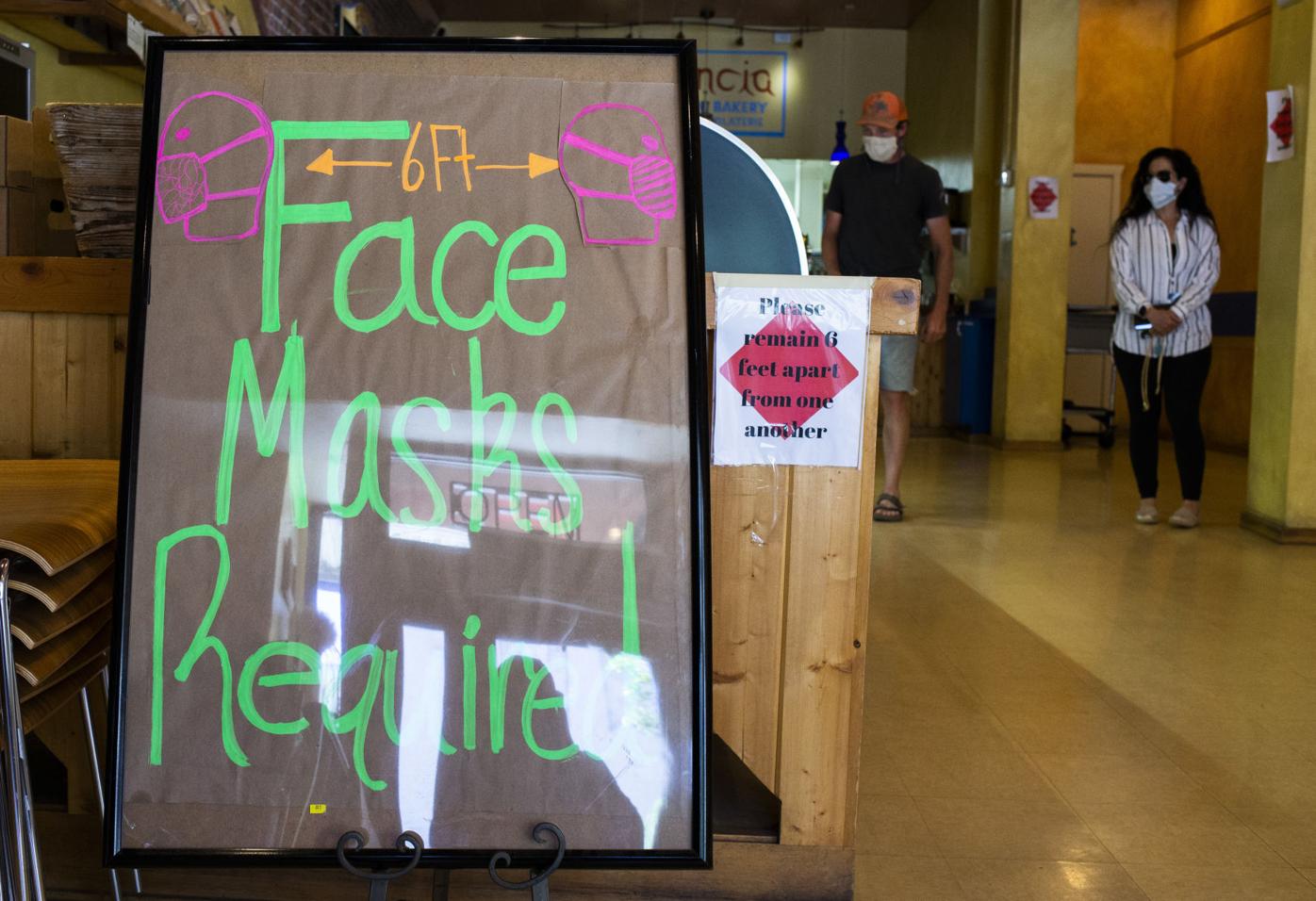 FILE — A sign at the entrance of Essencia Artisan Bakery notifies customers that face masks are required to be in the store on Tuesday, June 23, 2020, in Yakima, Wash.

FILE — Essencia Artisan Bakery employee Nyah Cruz, left, counts out change for customer Cynthia Martinez, right, on Tuesday, June 23, 2020, in Yakima, Wash. Signs at the front entrance and the register notified customers that masks are required to have masks on while in the store.

FILE — A sign at the entrance of Essencia Artisan Bakery notifies customers that face masks are required to be in the store on Tuesday, June 23, 2020, in Yakima, Wash.

Beginning Friday, everyone in Washington must wear face coverings in public settings to slow the spread of COVID-19, and Yakima County businesses must turn people away if they aren’t.

Individuals who don’t follow the state health order could be charged with a misdemeanor, while Yakima County businesses that violate Inslee’s proclamation would be subject to a gross misdemeanor.

“It is a fair thing to ask of our business community. We think that is an appropriate thing” for Yakima County, which has been so hard-hit, he added. As of Tuesday, the county had 6,668 confirmed cases of COVID-19 and 130 deaths.

“The infection rate is 27 times higher in Yakima County than King County,” Inslee said. “Only two counties in the western United States are in as bad a shape as Yakima County. This is an extraordinary situation.”

Officials are hopeful businesses comply, just as the “vast majority” of businesses impacted by Inslee’s “Stay Home, Stay Healthy” order did, he said. That order expired, though health and community leaders still encourage people to stay home as much as possible and counties must follow guidelines in Inslee’s four-phase Safe Start plan.

“The vast majority of businesses complied. We were very pleased by that,” said Inslee, who is hopeful for similar success in Yakima County businesses following his proclamation. “There were a few folks that did not (and they) got a call from a state agency. There were a couple that did not; they had to be sued.”

Businesses that violated the Stay Home, Stay Healthy order, and those that are open or operating in violation of rules for their county in the Safe Start plan, face fines from the Washington State Department of Labor & Industries.

Inslee said he’d prefer that to getting law enforcement involved.

“It is not our desire to have officers following people around” and citing them for not wearing masks, he said. “We hope that people’s common sense will help carry the day.”

There are exemptions to the facial covering mandate for the deaf or hard of hearing, in particular when they are communicating with someone else, according to information provided by Inslee’s office. Children under age 2 are exempted, while masks are strongly recommended but not required for children ages 3 to 5.

And it’s appropriate for people to remove a mask when they are engaged in recreation alone or with household members, or while seated at a restaurant, “provided they are distanced from other groups,” according to information from the governor’s office.

Inslee hopes his proclamation averts what he described during a Saturday news conference as an “imminent explosion” of coronavirus in Yakima County, which reports a per capita infection rate of about 700 for every 100,000 people.

Scientific models indicate widespread mask wearing can reduce the number of COVID-19 cases. There is also increasing evidence in other countries of a correlation between widespread mask usage and diminished spread of the virus, which is transmitted through exhalations, coughs and sneezes.

“As necessary economic activity increases and more people are out in their communities, it is imperative that we adopt further measures to protect all of us,” Inslee said. “Until a vaccine or cure is developed, this is going to be one of our best defenses.”

Secretary of Health John Wiesman, who issued the statewide mask order, noted that it does not eliminate the need for social distancing, rigorous hand-washing, the use of sanitizer and staying home as much as possible. Those who are sick should isolate at home.

Still, he said, masks are a crucial tool for slowing the transmission of COVID-19 as businesses open and more people leave their homes in the summer months.

“Over the last four months we’ve learned a lot,” Wiesman said. “People who are infected and asymptomatic or presymptomatic do play an important part in community spread here. Somewhere between 20 and 40 percent are asymtomatic and can spread (infection) for two days before they show symptoms.”

Anything from a scarf to a bandanna to a sewn mask will work, he said.

“It should sit snugly around your mouth and nose,” he said, emphasizing that facial coverings need to reach up over the nose. “It should not have holes or tears in the fabric. It should be washed frequently, daily. If not, wash your hands or use sanitizer after putting it back on.”

Craig Jelinek, president and CEO of Costco Wholesale, talked about the company’s requirement — now several weeks old — that all customers wear facial coverings. He said the requirement has helped keep employees and customers safer from infection.

“I’m a firm believer that wearing a mask anywhere you go ... I think it’s the only way to go,” Jelinek said. “I support this decision 100%.”

UFCW 21 is the largest private-sector union in Washington with more than 46,000 members working in retail, health care, grocery stores and other industries, according to its Facebook page.

“Our members are exposed to so many people at work each day,” Guenther said. “We know that face masks are a powerful tool to prevent the spread of COVID-19 and they work best if we are wearing them all together.”

“Our shared sacrifice will protect all of us,” Guenther said.

Yakima County masking recap: Is it effective? What's been done? And what's in the works?

Sometime in the next week, volunteers will be watching several Yakima County businesses to s…

Yakima County’s coronavirus transmission number is 2 to 2.5, meaning each person with the il…

35% of people in the Yakima Valley are wearing masks. Officials say it isn't nearly enough.

Public health recommendations to slow the spread of COVID-19

• Stay at home as much as possible

• Avoid close contact with anyone outside of your household

• If you must go out, ensure at least 6 feet of distance from others and wear a mask

• If you have a fever, cough, shortness of breath, fever, muscle pain, headache, sore throat or new loss of taste or smell, get tested for COVID-19 within 24 hours. For testing locations, call 2-1-1.

• If you have any symptoms of illness, stay at home and isolate except to get tested. Make sure those you have been in close contact with know they need to quarantine.

A pledge of $10 million from the state will fund a pilot program to help Yakima County slow the spread of COVID-19.