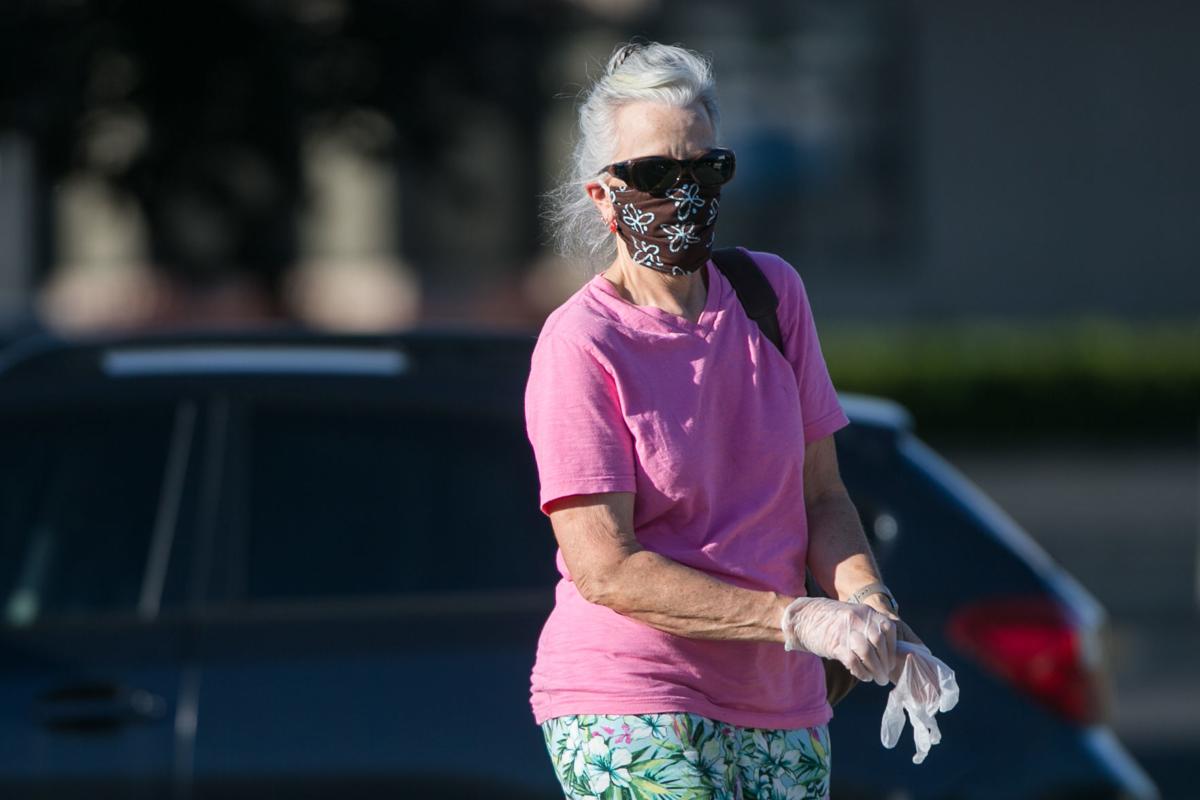 Cindy Moore wears a mask as she dons latex gloves before entering a grocery store Wednesday, May 27, 2020, in Yakima, Wash. 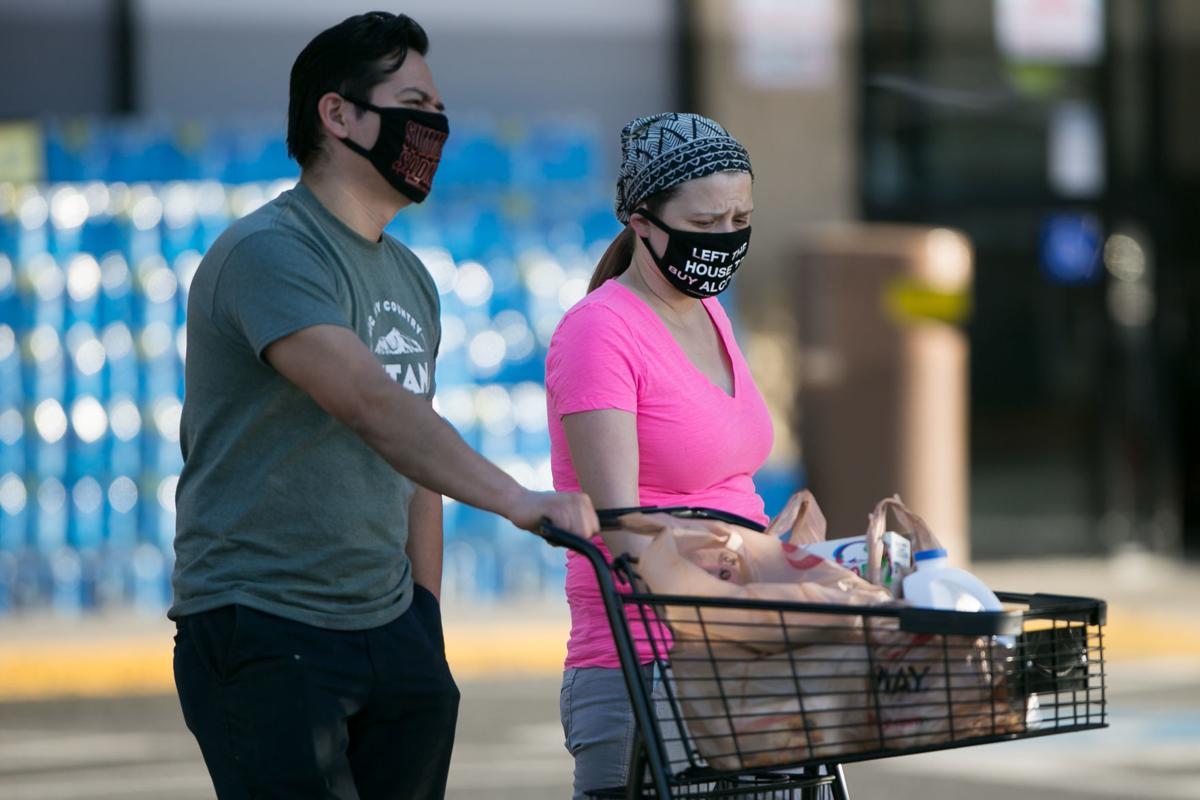 Cindy Moore wears a mask as she dons latex gloves before entering a grocery store Wednesday, May 27, 2020, in Yakima, Wash.

Health officials had a blunt message for the public Wednesday: If you want Yakima County to reopen, you need to do your part.

That means staying home if you’re sick, not gathering in groups, and wearing masks when you’re out in public, they said.

By the end of the afternoon, the county reported 129 new confirmed cases.

Lilián Bravo, with the Yakima Health District, reported during a Facebook Live update Wednesday that Yakima County remained at 87 total COVID-19 deaths. All but four had underlying health conditions, she said.

Of 39 people hospitalized, about 23% are intubated. To date, 1,106 people have recovered from having the virus, according to health district data.

The county had 3,184 confirmed cases of COVID-19 early Wednesday afternoon. With 13,304 tests completed, that’s a 23% positivity rate — much higher than the state’s 6% rate, or that of King County, the most populous county in the state, at 8%.

The state’s goal is a positivity rate of 2%, Bravo said.

By the end of the day, the county’s confirmed cases had climbed to 3,252 — an increase of 129. That’s the biggest single-day increase during the outbreak.

Yakima County also has Washington’s second highest number of total cases, after King County, with nearly 7,900. And Yakima County has the highest positivity rate in the state.

With the county still averaging 50 to 100 new coronavirus cases each day, Bravo said Yakima remains “a ways away” from entering Phase 2 of Gov. Jay Inslee’s plan to reopen Washington.

Over the weekend, about 400 people gathered at Yakima Raceway and called on Inslee to reopen the economy immediately. A slightly smaller crowd rallied downtown May 1 to make the same demand.

Yet according to a new survey by the health district and Virginia Mason Memorial Hospital, only about 35% of people going into local stores are wearing masks, as urged by health officials.

The Centers for Disease Control and Prevention recommends wearing cloth face coverings in public settings to slow the spread of COVID-19.

For those eager to see the county re-open, Bravo said the best thing to do is to stay at home. Otherwise, people should follow basic guidelines: wash your hands frequently, practice social distancing and wear masks when out in public — not to protect yourself, but to prevent the virus from spreading to others, she said.

“If we want to see these rates go down, this is what we have to do,” she said.

Yakima Health District Executive Director André Fresco said during Wednesday’s county Board of Health meeting that re-opening is not a question of economy vs. safety.

It has to be both.

“To be able to reopen, we need to have safety measures in place,” he said. “It’s not either-or.”

The health district will soon be rolling out a multimedia public awareness campaign to emphasize the importance of community members’ following recommended prevention guidelines — a campaign expected to cost at least $50,000.

When will Yakima re-open?

Dr. Teresa Everson, health officer for Yakima County, said Washington Gov. Jay Inslee has five main metrics for re-opening counties, which get ranked from red — meaning they aren’t doing well — to green, which means they are.

Yakima is still solidly in the red when it comes to disease activity, risk to vulnerable populations and health care system readiness. The county fared only slightly better — yellow — for testing capacity and contact tracing.

She considers wearing masks the best strategy for improving the county’s infection rates.

In a recent survey conducted in conjunction with Virginia Mason Memorial, volunteers watched 2,000 people as they entered local stores to see if they were wearing masks. Only 35% were, Everson said — a number nowhere near the county’s 80% goal.

Masking needs to become the norm, not the exception, she said.

“We as a community need to be doing a better job with masks,” Everson said. “We need every resident of Yakima County to be doing their part.”

She added that the health district is in the process of acquiring thousands of cloth masks for residents who need them.

She also noted that social gatherings have continued, despite recommendations that people not get together with more than five people outside of their families until Phase 2, and that transmissions from gatherings could be a barrier to getting the county to a point where it’s eligible for reopening.

Two of the state’s three National Guard testing units are deployed in Yakima County. They tested more than 1,000 people last week and an additional 400 Tuesday.

Bravo said people showing symptoms of COVID-19 should contact their primary care doctors and arrange to be tested. Health officials have added a number of symptoms — including headaches, chills, body aches, nausea, diarrhea, and loss of smell or taste — to the list of initial symptoms for which people should get tested, which included fever, shortness of breath and coughing.

The health district has been hosting several drive-through sites to increase the accessibility of testing. On Wednesday, testing sites were Naches Elementary School and Zillah Middle School.

Bravo said testing would also happen Thursday at the State Fair Park in Yakima and at the White Swan Dental Clinic in White Swan, and on Friday at Valley Mall in Union Gap and Adams Elementary School in Wapato.

Everson said asymptomatic individuals should only be tested if they had close contact with a confirmed case, meaning they were within 6 feet of an infected person for at least 15 minutes.

Shawn Magee, an environmental health specialist for the health district, said staff have inspected 14 of the county’s agricultural facilities for consultations about how employers could better protect their workers. While employers were open to the advice, some hedged when the topic of testing came up, voicing concerns about how testing could impact their production, Magee said.

Magee said he is working with the employers and the state Department of Health seeking more “buy-in” for employee testing at operations where there have been confirmed COVID-19 cases.

Everson said two of the county’s nine long-term care centers experiencing outbreaks have reached a point where they are able now to accept new admissions.

Melissa Sixbery, director of disease control for the health district, said an investigation into the outbreaks revealed the spread had started with infected staff who worked in more than nursing home.

The health district is conducting weekly testing on all staff who previously tested negative, Sixberry said. Staff also are required to use N95 or KN95 masks, rather than cloth masks.

Nathan Johnson, with the county office of emergency management, said that all long-term care centers will be receiving additional personal protective equipment from FEMA in the upcoming weeks.

Kittitas County is now in Phase 2 of the state’s coronavirus re-opening plan, after it received approval from the state on Wednesday.

Kittitas County submitted an application earlier this month, but it was on hold because after an outbreak at Twin City Foods in Ellensburg.

A news release from the state Wednesday said the Kittitas County Public Health Department demonstrated its ability to quickly and thoughtfully respond to an outbreak and the state Department of Health “continues to have confidence in their approach.”

Twenty-four counties have been approved to move to Phase 2 of the governor’s plan. Under Phase 2, restaurants can reopen dining rooms at less than 50% capacity, and barbers, hair and nail salons can reopen.

To apply for a variance, counties must have an average of less than 10 new cases per 100,000 residents over a 14-day period. The application process requires support from the local health officer, the local board of health, local hospitals, and the county commission/council.

Klickitat, Kitsap and Clallam counties are eligible to apply, the news release said.

35% of people in the Yakima Valley are wearing masks. Officials say it isn't nearly enough.