Free access for current print subscribers
Get Started
You are the owner of this article.
Edit Article Add New Article
You have permission to edit this article.
Edit
Home
News
Bottom Line
Sports
SCENE
Photos & Video
Opinion
Obituaries
Unleashed
Classifieds
The Vanished
1 of 8 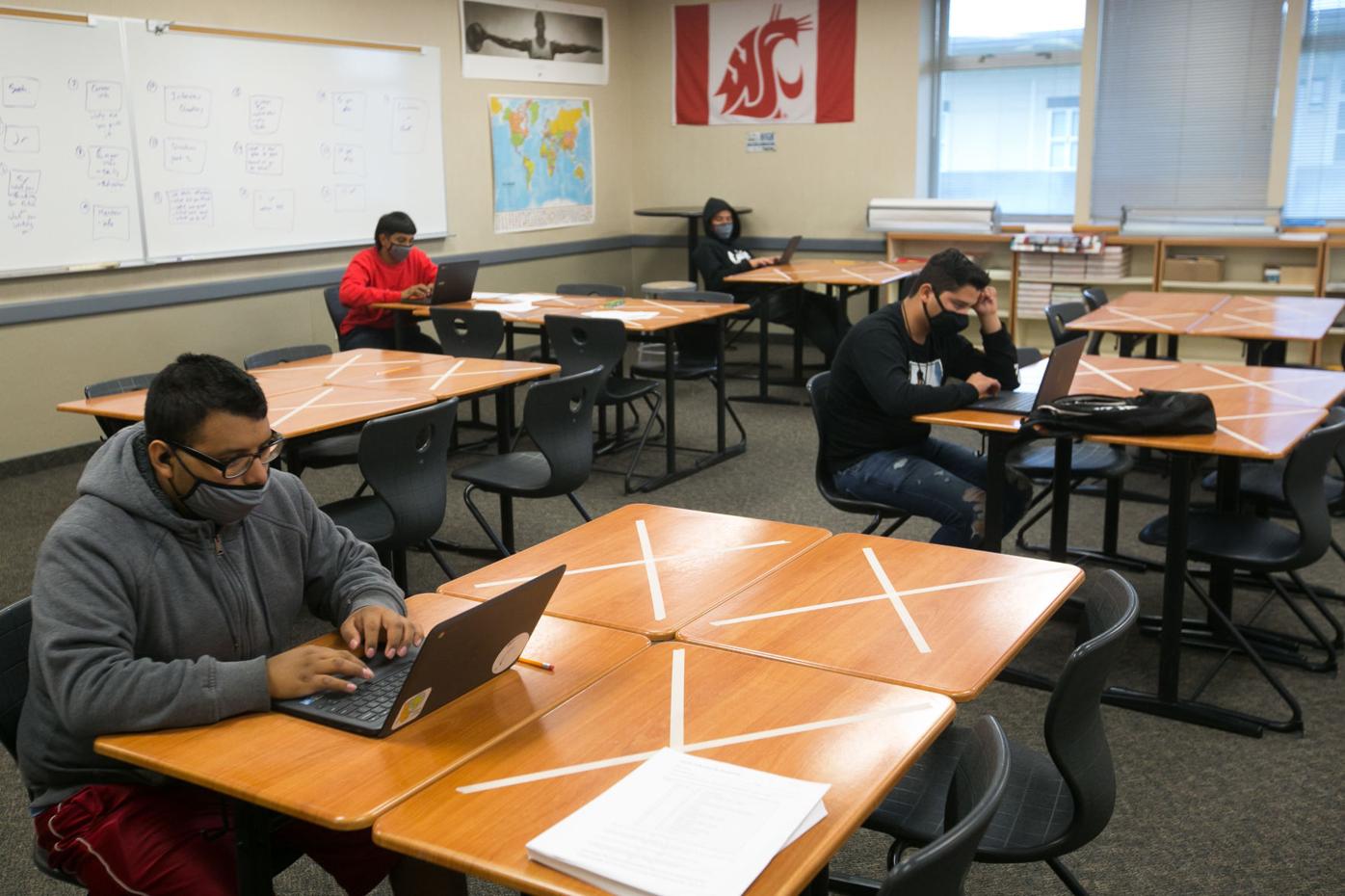 Seniors socially distance as they study remotely on campus for an after-school support program Monday, Nov. 9, 2020, at Sunnyside High School in Sunnyside, Wash. 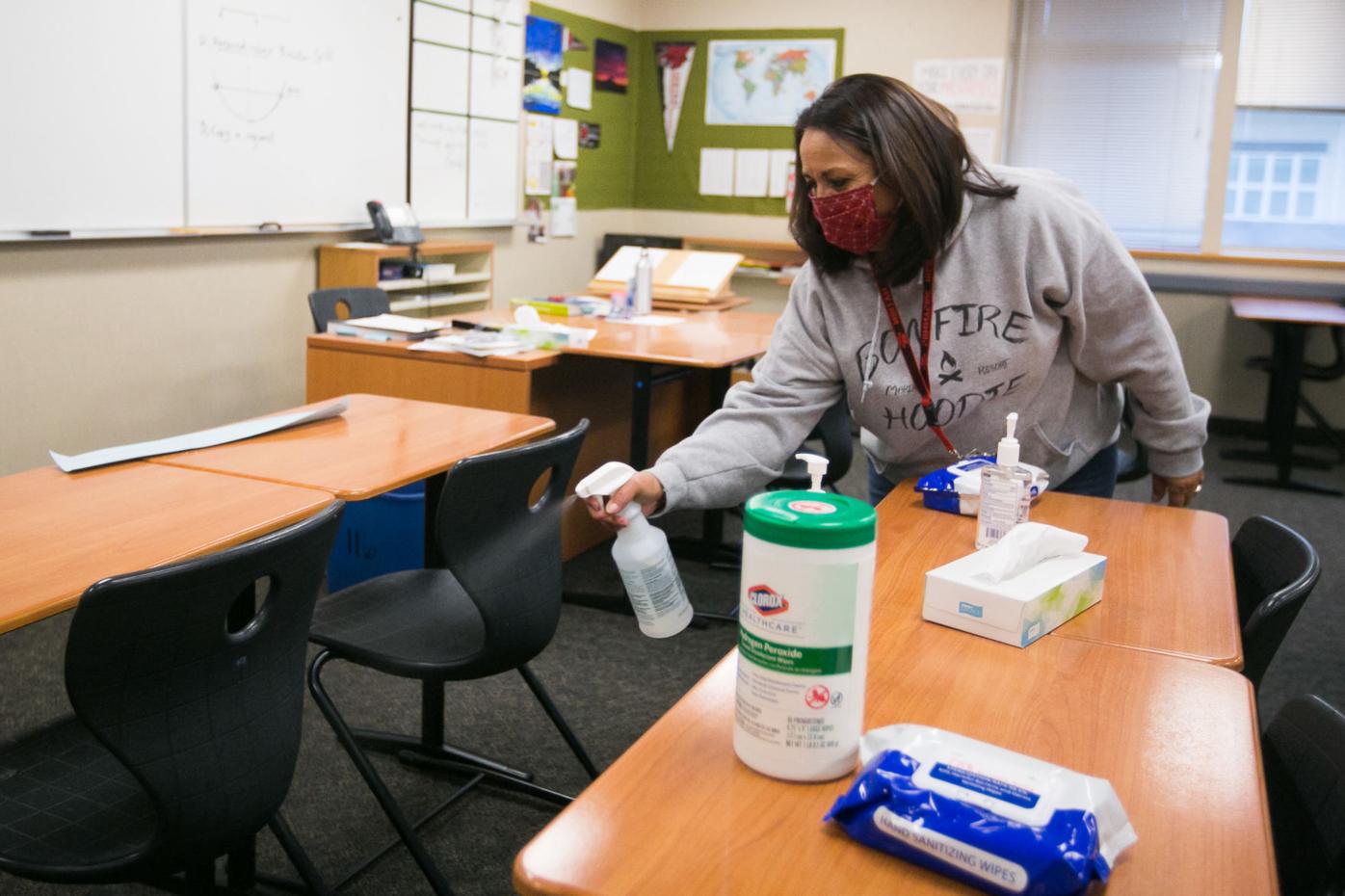 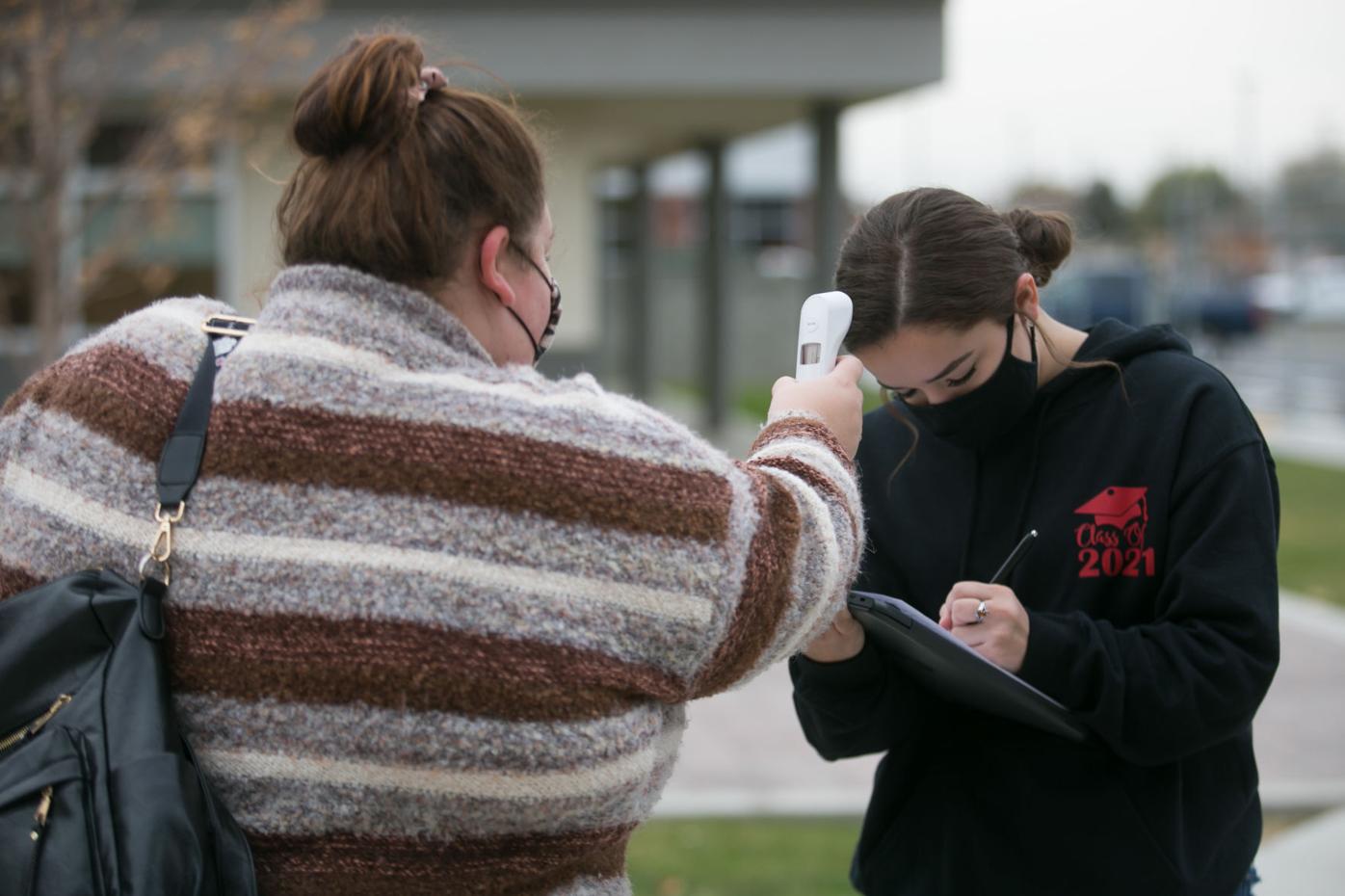 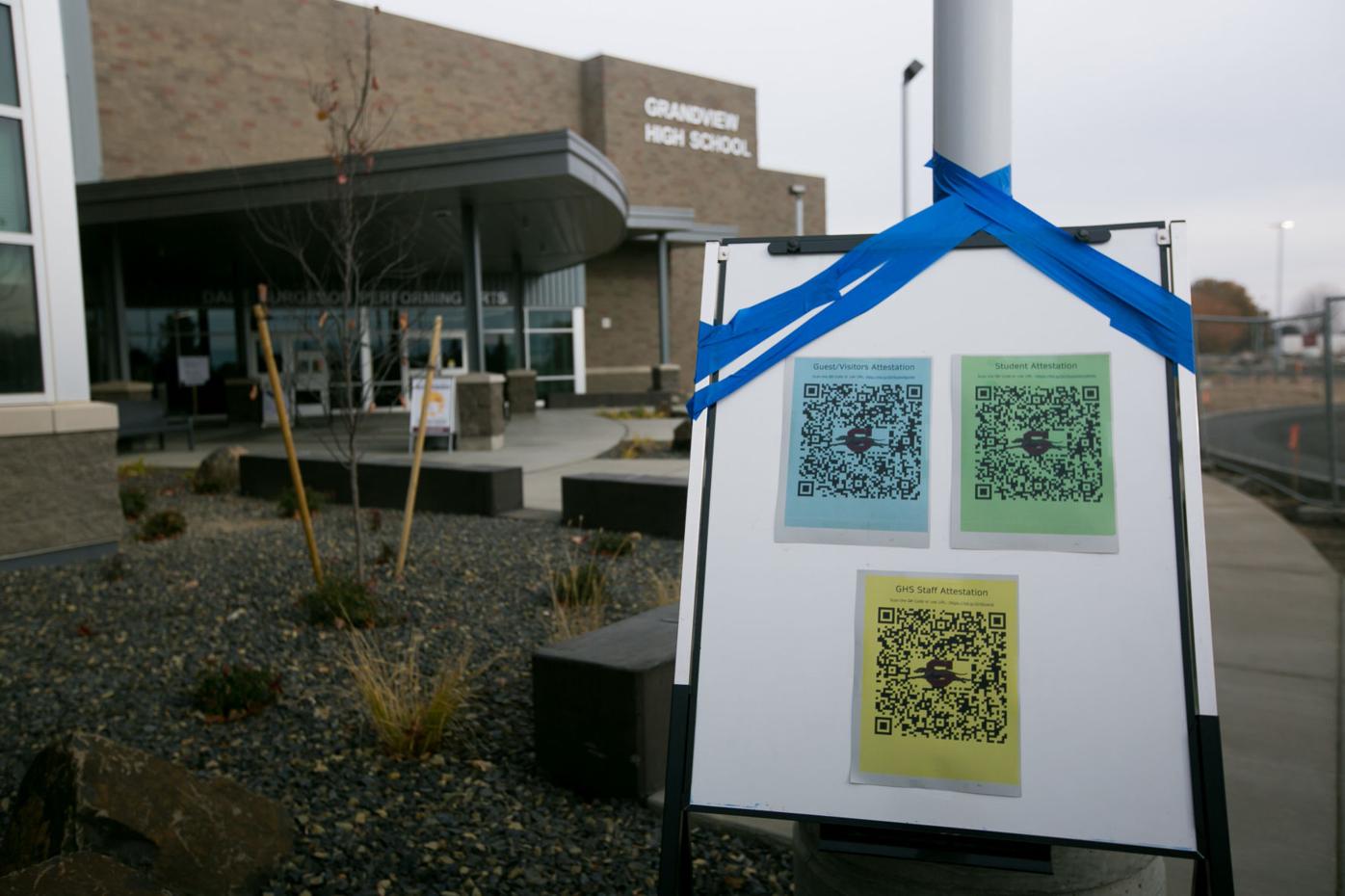 A sign with three QR codes stands near the front entrance of Grandview High School in Grandview, Wash., Thursday, Nov. 12, 2020. The QR codes are visitors, students and staff attestations before entering the school building. 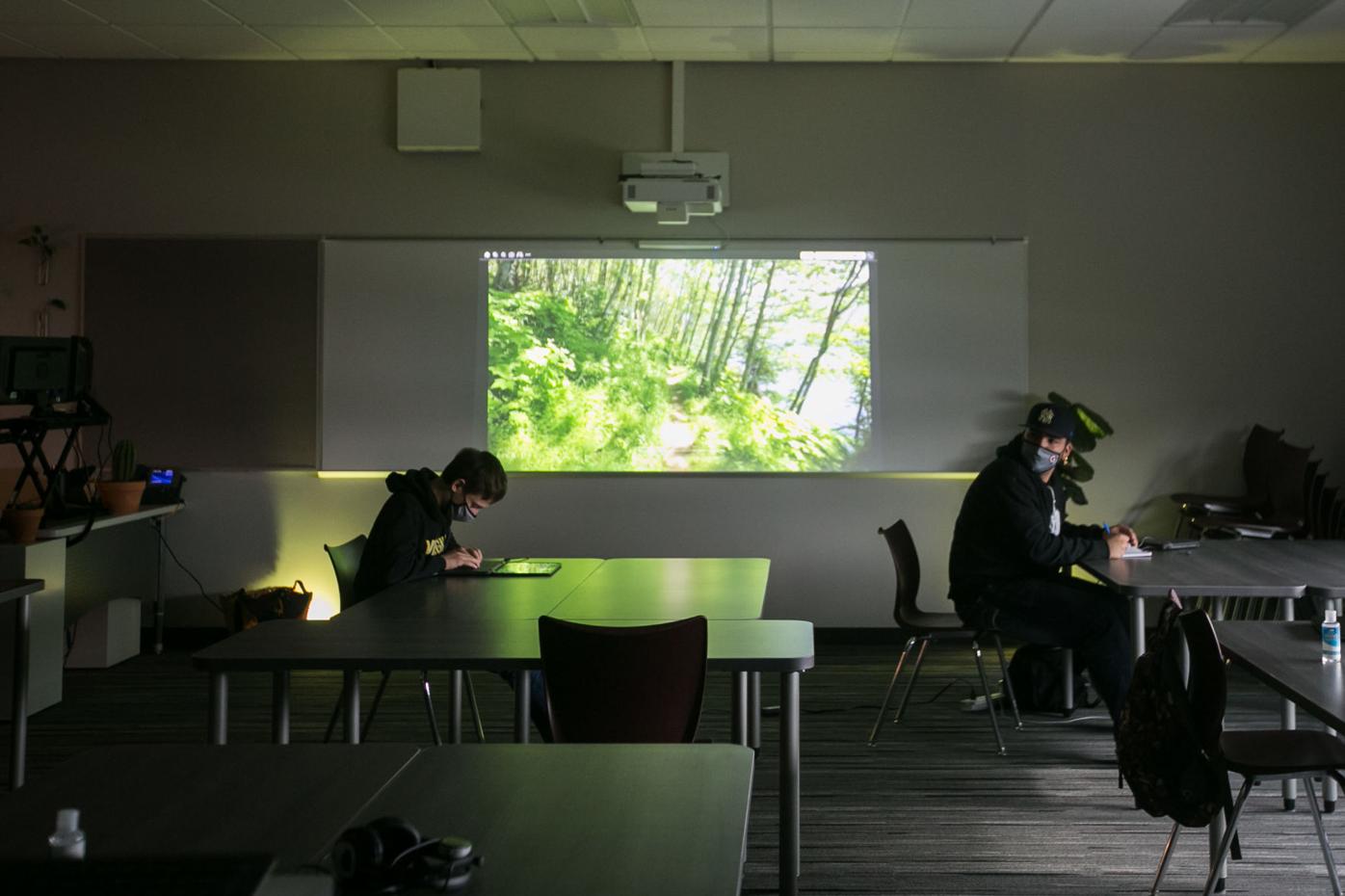 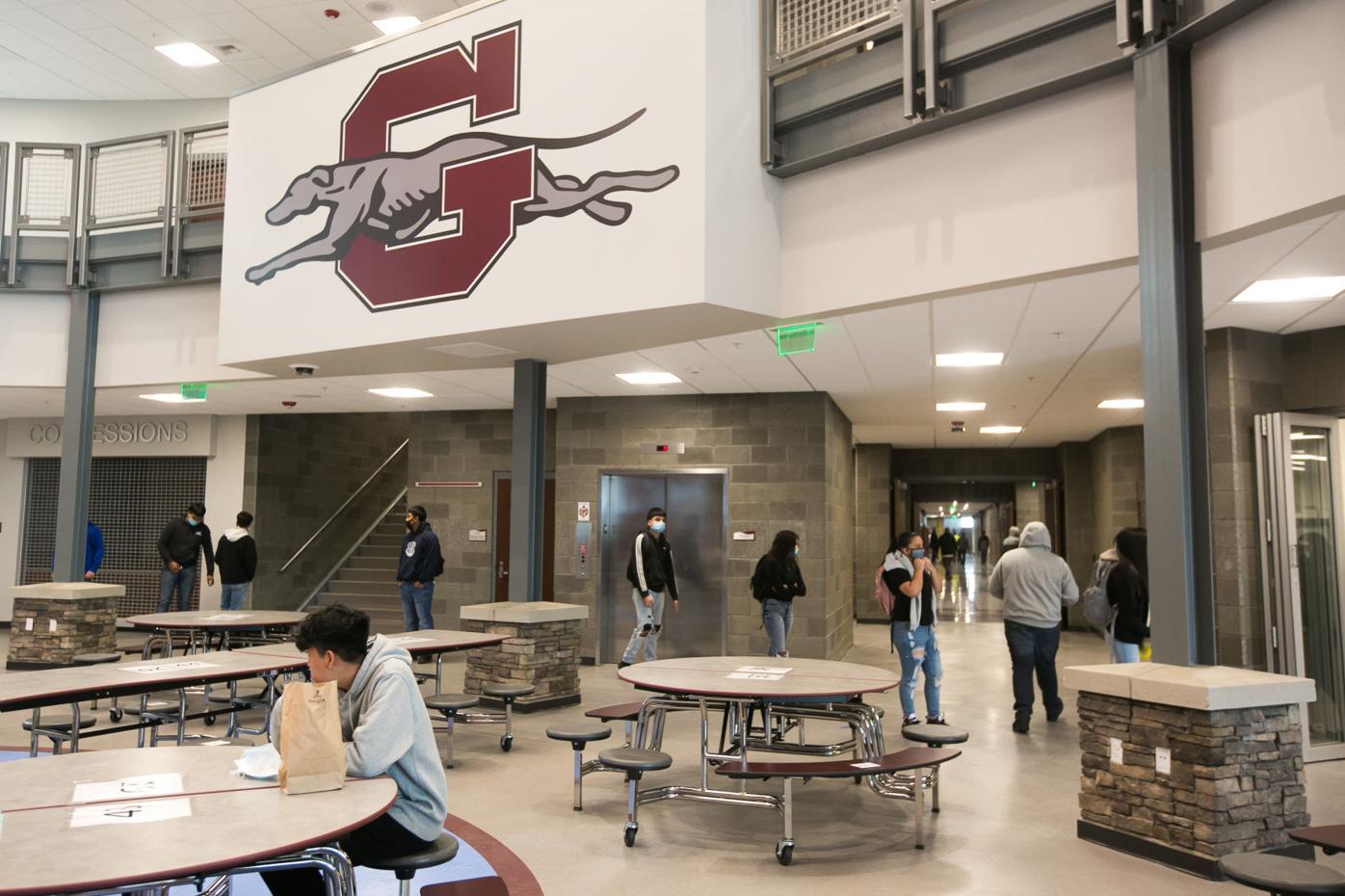 A cohort of students socially distance as they wait in line for lunch Thursday, Nov. 12, 2020, in the cafeteria at Grandview High School in Grandview, Wash. 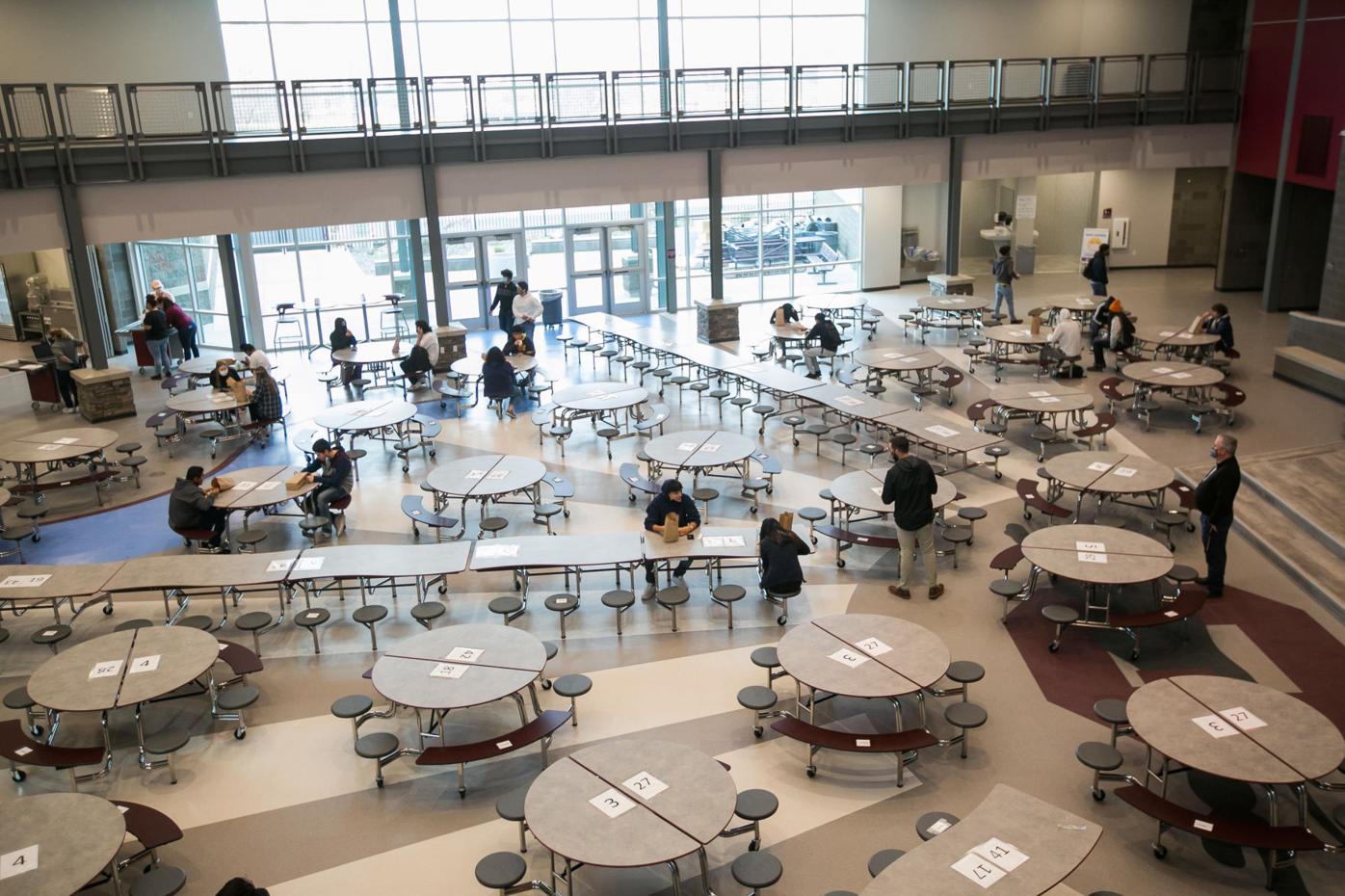 Students sit on tables assigned to their cohort during lunch Thursday, Nov. 12, 2020, in the cafeteria at Grandview High School in Grandview, Wash. 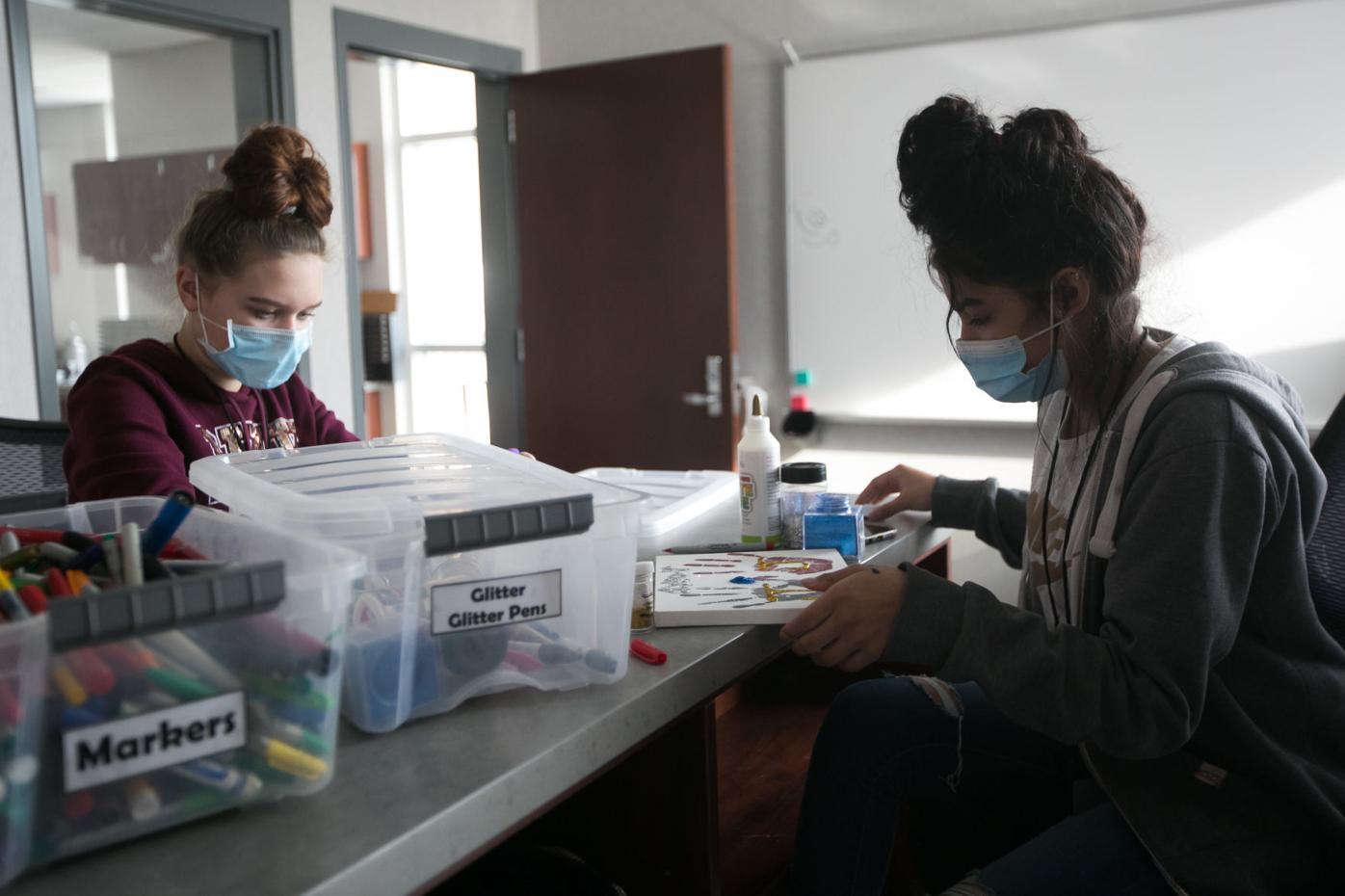 Seniors socially distance as they study remotely on campus for an after-school support program Monday, Nov. 9, 2020, at Sunnyside High School in Sunnyside, Wash.

A sign with three QR codes stands near the front entrance of Grandview High School in Grandview, Wash., Thursday, Nov. 12, 2020. The QR codes are visitors, students and staff attestations before entering the school building.

A cohort of students socially distance as they wait in line for lunch Thursday, Nov. 12, 2020, in the cafeteria at Grandview High School in Grandview, Wash.

Students sit on tables assigned to their cohort during lunch Thursday, Nov. 12, 2020, in the cafeteria at Grandview High School in Grandview, Wash.

Early this fall, Grandview High School Principal Kim Casey became concerned about a rising number of failing grades among her students. For a variety of reasons, from poor Wi-Fi to lack of quiet space or adult support, students’ grades were slipping dramatically amid remote learning brought on by the COVID-19 pandemic.

She felt the need to do something right away.

“First graders have 12 years to repair what comes of this. High schoolers don’t have that much time to repair,” she said.

While local public health officials have paused plans to bring back all high school students on campus, they have suggested meeting with small groups of high-needs students in person.

“They could be not on track to graduate, failing classes, not having Wi-Fi, special education, English language learners, whatever it may be, the (students) furthest from educational justice,” Casey said.

So in early October, with local health district guidance and following strict safety procedures, the school invited nearly 150 students in grades 9-12 back to campus for in-person learning in groups of seven students or fewer.

It’s one of several ways that local schools have gotten creative in an effort to reduce a rise in failing grades, and to get students back on track. Some schools report as much as double the amount of failing grades this term as usual — even while some students are thriving.

In response, several local schools have invited struggling students to learn in small groups in person. Sunnyside High School has brought struggling seniors on campus for after-school support. And Yakima School District’s high schools are creating flexibility in the length of their school terms.

“We’re adapting,” said Sunnyside High School Principal Ryan Maxwell. “We can either say COVID is the reason why we have failing students, or we can say COVID is there and we’ve got to work to get around it.”

When students arrive on campus in Grandview, they fill out a health survey and have their temperature scanned before entering the building. Inside, they wear masks and follow tape on the ground with walking paths to their assigned homeroom, where desks are spaced at least 6 feet apart.

There’s plenty of elbow room in the halls and classrooms. Fewer than 150 high-need students out of a total student body of roughly 1,000 are participating in in-person cohorts. Both students and teachers spend the first 30 minutes of each period in a video conference. After, free work on assignments begins.

Students on campus might not be in a cohort with a teacher of theirs. But they can ask for support from them or a paraprofessional, or get permission to visit one of their instructor’s classrooms for more help.

Aside from this opportunity to meet with other teachers, each cohort of students travels together to lunch and gym, for example, and doesn’t mix with other groups of students. This way, if a case of COVID-19 occurs, the students and staff exposed can be easily traced, Casey said. As of Nov. 24, the Yakima Health District has recorded no cases of COVID-19 at the high school since the in-person system began.

For one student, Evelyn Hernandez, 15, who recently transferred into the district, this set-up has made all the difference. She had been doing schoolwork through a smartphone prior to starting in-person learning at Grandview High. She said it made Zoom calls complicated to participate in, and school assignments would take up too much space on her phone, so she quickly fell behind. Soon, she was failing all of her classes. But at Grandview, she has access to a computer and teacher support. A few days into in-person learning, she had moved one grade to passing and was making progress in other classes, she said.

Two other students spoke of newfound motivation, and a better grasp of concepts, rather than just pursuing good grades without reaping new knowledge.

Once students get their grades up, they might return to remote learning to allow another student to participate in-person. Some teachers expressed concern that those who had made strides might have their grades slip again, but said they could be brought back on campus in that case.

When public health guidance allows, she said, she hopes to invite all 400 students whose parents expressed interest in in-person learning to join the cohort system.

In nearby Sunnyside, seniors with failing grades have similarly been brought back on campus in cohorts, but for just an hour after school.

Sunnyside High School has a recent history of graduating more than 90% of its senior class, well above the state average of 80.9%. That’s in part because it tracks student progress closely, and is able to see when a student is failing a class on a week-by-week basis to intervene.

“Online has made it much trickier, because we don’t see the kids, and we can’t provide the timely interventions we normally do,” said Sunnyside’s Maxwell.

Early this fall, their staff also noticed student engagement had dropped significantly. On a given week, anywhere from 80 to 100 seniors had failing grades, putting them off-track for graduation. That’s about a quarter of this year’s graduating class.

Valeria Cortez, 17, was among them. Prior to the pandemic, Cortez said she didn’t struggle with failing grades. This fall, she was suddenly failing three, making it a strong possibility she wouldn’t graduate on time. There were several contributing factors. Her Wi-Fi would cut out in the middle of video conferences; it was hard to schedule one-on-one time with teachers to work through confusion; there were distractions at home and her motivation was declining.

“This year’s just been very downhill, ever since COVID,” she said.

In mid-October, with the help of about 25 teachers and paraprofessionals who offered their time, the school was able to launch a daily hour-long after-school intervention, where groups of up to five students were assigned to each classroom. As many as 100 students can be helped, although about 60 students participate each day.

Sunnyside’s physical setup is similar to Grandview’s with health screenings, masks and physical distancing in classrooms. But the time is solely dedicated to completing assignments, and getting the help of a teacher. In this case, the school has tried to set students up with a teacher whose class they’re struggling in.

About two weeks into the after school program, Cortez turned her Fs into Bs and was working to make more improvements. The biggest difference: a lot of one-on-one time with a teacher who can explain concepts immediately, rather than trying to schedule an appointment online, she said.

From the teacher perspective, in person time helps, said Judy Simerl, an English teacher at the high school. In ordinary circumstances, she has a seat beside hers for students to get one-on-one help throughout the period. There’s usually a queue of students waiting for that one-on-one attention. At the same time, she would be following along with other student assignments on Google Documents and could call out suggestions as they worked on them. Online, students seem less willing to ask for help over Zoom, so this kind of interaction is limited.

Simerl and several other teachers on campus said student grades and engagement have improved as they’ve met with students after school. They said the one-on-one support eliminates confusion and helps students work independently with confidence. Some give tips on how to prioritize assignments that count for more of their overall grade, while others have helped students set small goals for the hour to reduce stress.

Maxwell said the school is seeing strong returns from the intervention, with failing grades across the board declining. Still, he said, with about 40 seniors of concern not attending the after school program regularly, there are still needs to be met.

In one effort to reach these students, as well as lower-grade level students who are struggling, the school dubbed this past and coming week “grace week,” in which teachers zero in on their students with failing grades and help them get back on track before the end of the trimester when grades are finalized.

In Yakima’s high schools, the end of school terms themselves are being adjusted to give students more time. Before the new school year, the district decided to shift the high school to a quarter system temporarily, allowing students to focus on three courses at a time rather than six.

Still, student outcomes are not what they might want.

“Kids are either thriving in this atmosphere or they are struggling,” said Eisenhower High School Principal Eric Diener.

He said few high school students are getting mediocre grades. Instead, they’re either acing courses or failing, overall, he said, adding that the school was seeing “at least double the amount of NCs (non-complete) and Fs that we see since previous years.”

Now, amid falling grades, both principals are encouraging teachers to leave their online courses open after the end of the quarter, allowing students to continue working on content and improving their grades. They are also encouraged to offer alternative assignments or extra credit for students to boost their grades. Diener and McDaniel are continuing to brainstorm other solutions, and are urging teachers to get creative in how they support students.

“This is a constant concern and issue throughout the state that we’re all trying to navigate and provide as much resources as necessary,” McDaniel said.

But the concern is not just immediate, Diener said. He’s also worried about the standards younger students are missing during this period, and how to help them get caught up.

“I think we’re going to see these gaps for six, seven years,” he said.