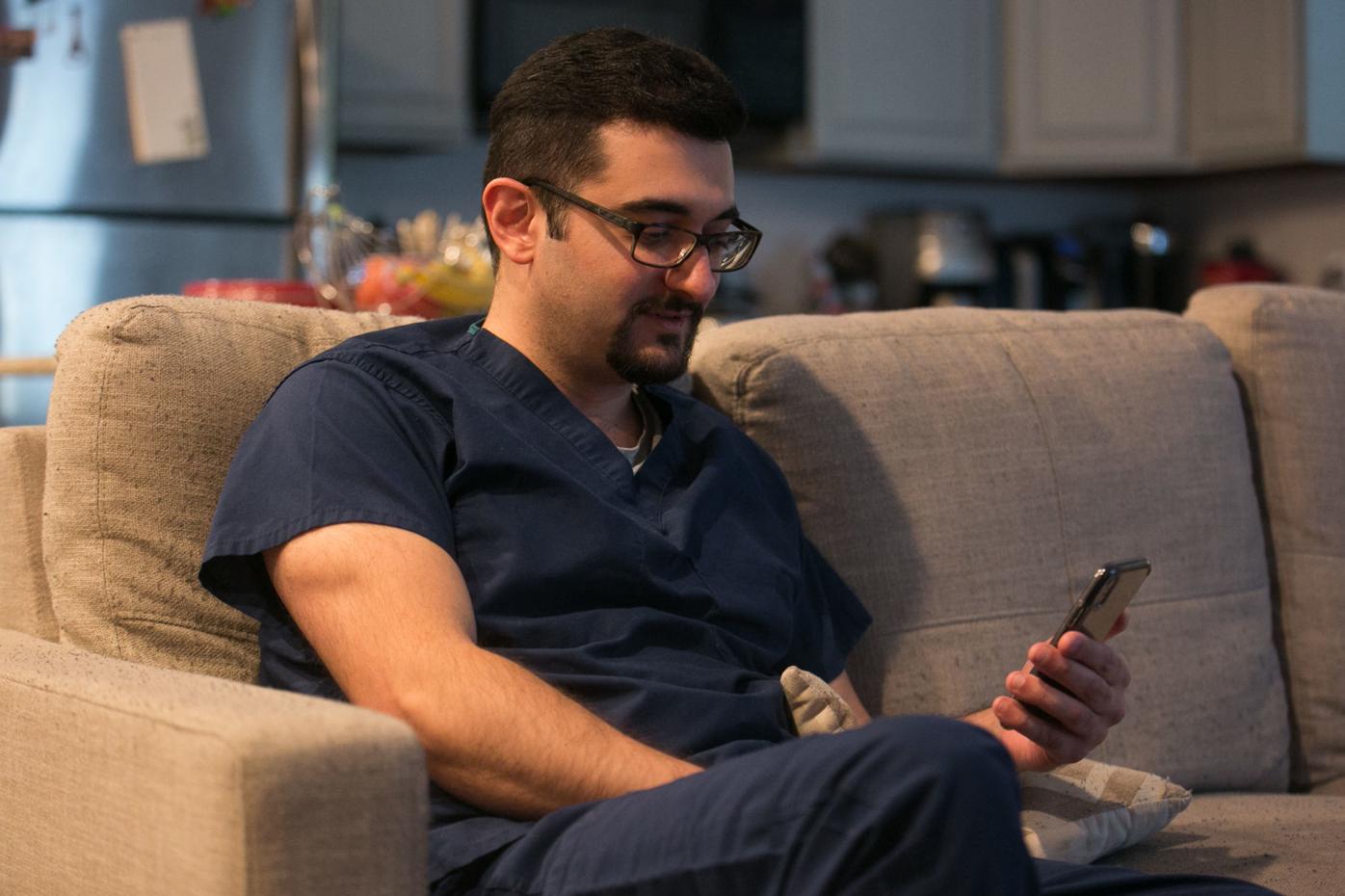 After his shift at the hospital, Dr. Puzant Topaljekian, M.D., video-chats with his wife, Mariam Tsaturyan, and 3-year-old son, Daniel Topaljekian, Friday, April 3, 2020, at his home in Selah, Wash. 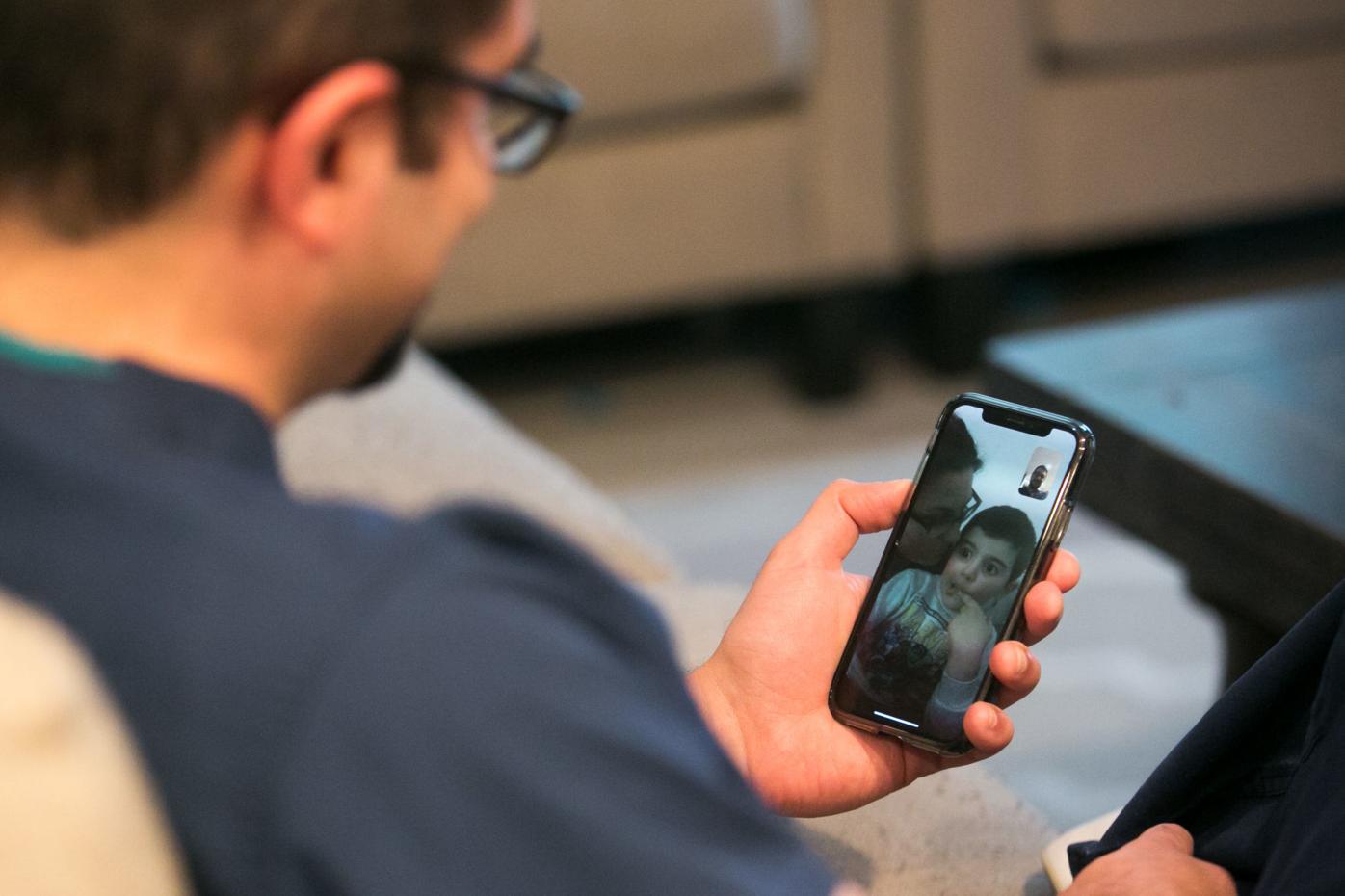 Mariam Tsaturyan and Daniel Topaljekian, 3, are seen on Dr. Puzant Topaljekian’s cellphone while they video-chat Friday, April 3, 2020, at his home in Selah, Wash. 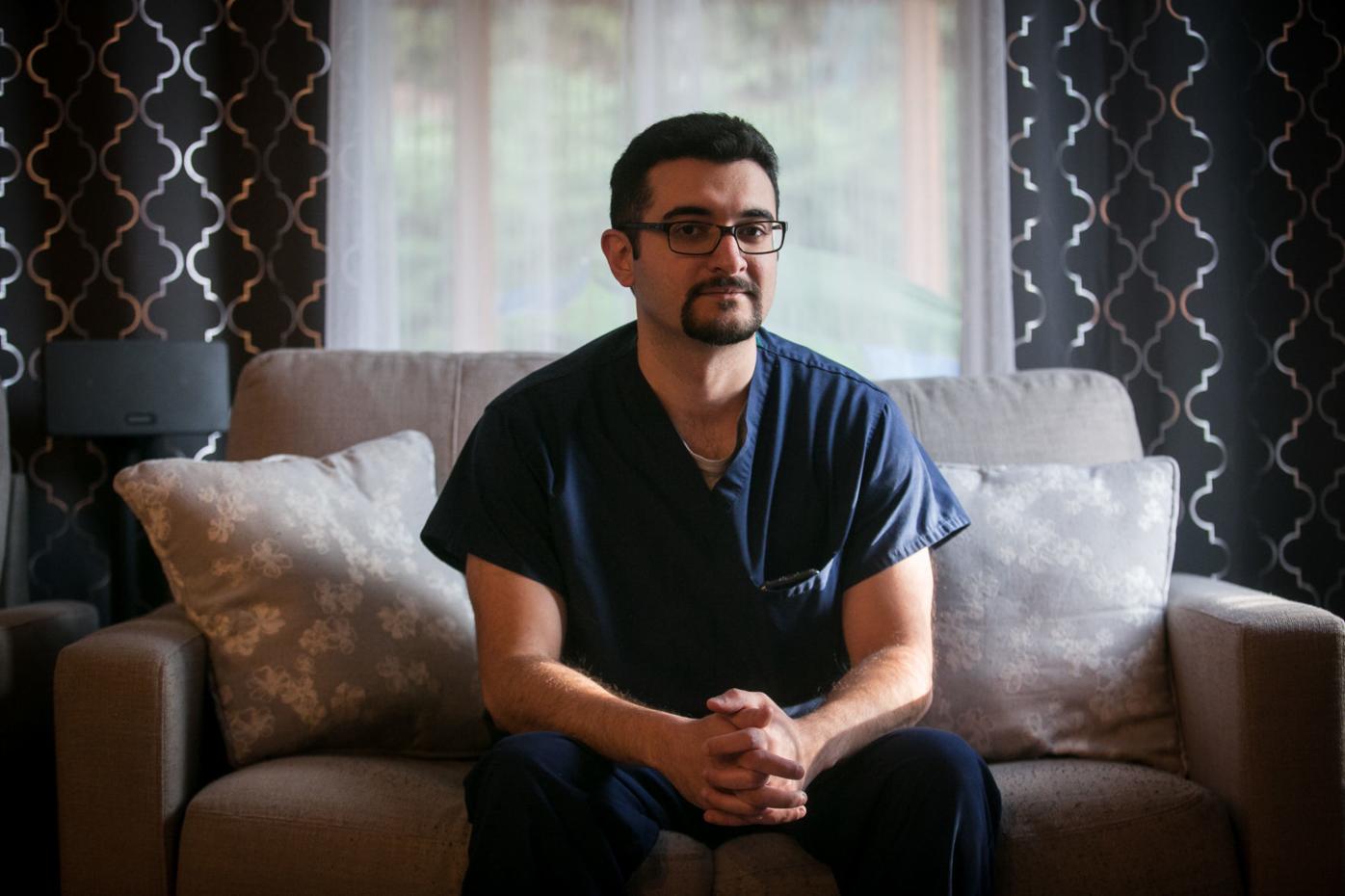 Dr. Puzant Topaljekian poses for a portrait at his home Friday, April 3, 2020, in Selah, Wash.

After his shift at the hospital, Dr. Puzant Topaljekian, M.D., video-chats with his wife, Mariam Tsaturyan, and 3-year-old son, Daniel Topaljekian, Friday, April 3, 2020, at his home in Selah, Wash.

Mariam Tsaturyan and Daniel Topaljekian, 3, are seen on Dr. Puzant Topaljekian’s cellphone while they video-chat Friday, April 3, 2020, at his home in Selah, Wash.

Dr. Puzant Topaljekian poses for a portrait at his home Friday, April 3, 2020, in Selah, Wash.

There’s no one left whose life hasn’t been affected.

In early March, as the seriousness of the coronavirus outbreak began to dawn on us, a significant portion of the Yakima Valley was still living an essentially normal life. People were buying plane tickets or planning spring birthday parties or signing their kids up for spring sports.

No one is living a normal life now. You can’t live a normal life when a pandemic has closed so many businesses. Or when new unemployment claims hit a record high, then doubled within a week after that, imperiling the U.S. economy for the foreseeable future. You can’t live a normal life when demand has suddenly overwhelmed previously stable supply chains. You can deny the COVID-19 threat all you want, but that won’t help you find toilet paper. It won’t reopen your favorite restaurant. It won’t keep people you know from getting sick.

This is our life now. These are still the early days of it. But we’re all in it, one way or another. In an effort to chronicle that, we’ll be running intermittent collections of vignettes aimed at showing how people here in the Yakima Valley have been affected and how they’re confronting this challenges of the moment. We all have a story. If you’d like to share yours or you know someone who might, email pmuir@yakimaherald.com.

The 36-year-old third-year-resident physician started a monthlong rotation at Virginia Mason Memorial Hospital last week. Just being there makes him an exposure risk. So he and his wife, Mariam Tsaturyan, had an impossible decision to make. If she and their 3-year-old son, Daniel, went away, they could isolate themselves and stay safe, but Topaljekian would be left alone during the most stressful and emotionally demanding month of his professional life. If they stayed in Yakima, he would be putting them in danger every time he walked through the door at the end of his shift.

“With me starting this hospital service and the way the numbers are projected to increase, I didn’t want to get home and feel contagious and feel guilty,” Topaljekian said.

Mariam and Daniel left Monday. They’re staying with her parents in Los Angeles. Topaljekian sees them every day via FaceTime, but so far that isn’t making the distance much easier. Daniel is a daddy’s boy, Topaljekian said, and he’s too young to understand why he’s apart from his father.

“It’s very emotional,” Topaljekian said of the FaceTime sessions. “We’re happy to have this means of communication in times like this. But, at the same time, when Daniel sees me, it reinforces that I’m not there.”

That makes Daniel act out, which makes Topaljekian question whether the sessions are making things better or worse.

After all, Daniel isn’t the only one hurting. Working at a hospital amid a pandemic that has stretched medical resources close to their breaking point, then coming home to an empty house has been “draining; mind, body and soul,” Topaljekian said.

“It’s been challenging going home every day and not hugging my son,” he said. “He always meets me at the garage. It’s something I always look forward to, coming home and him waiting there to hug me.”

Topaljekian has time off in a month. If he’s free of symptoms and doesn’t need to self-isolate, he’ll go to Los Angeles to reunite with his family. But that’s not a sure thing. Nor is the month after that, or the month after that. He believes he and his family made the right choice. That’s something to cling to, but it doesn’t make the distance easier.

The 34-year-old Yakima mother of four boys, who lives on an $800-a-month disability check because of multiple sclerosis, didn’t realize she would actually be confined to her home. She figured she could get her kids to push her in her wheelchair — she uses a walker at home, but can’t get far without a wheelchair — and go get necessities at a gas station or the Safeway store nearby.

“I thought it was just a whole big ploy by the government,” Harmon said. “Everybody thinks that at first.”

But when caregivers at the nursing home she lives across the street from started getting diagnosed, “then it was real.” Then it became clear that, with her immune system compromised by the medication she takes for MS, she shouldn’t be going out at all. So she’s been stuck at home with her kids, aged 10, 12, 13 and 17 and their growing-boy appetites, relying on the few friends and family she has locally to bring her medicine and go shopping for the family.

“We’re just stuck,” Harmon said. “And the people who can help us can’t find anything when they go out because of the pandemic buyers.”

She can’t pull strings or spend extra to get necessities, because she doesn’t have the means.

“We live on disability,” Harmon said. “The people who buy out the toilet paper — we can’t do that.”

Besides all of which, her 12-year-old son has asthma. The others are healthy. But to protect him and herself, everything that comes into the house needs to be disinfected, and the family is running out of hand sanitizer.

“I’m going to fight for as long as I can for my family,” Harmon said. “And I’m going to do everything I can. But if people continue to think only of themselves, we’re just not going to make it.”

• Tony Duran, 78, remembers growing up in Mexico and hearing his grandparents talk about the 1918 flu, the pandemic that killed more than 50 million people worldwide.

That’s the only point of reference he has for COVID-19. There hasn’t been anything like it in his nearly eight decades on earth. So he doesn’t know just what to make of it. But he’s well aware that it tends to affect seniors more severely. It’s “up to the Lord when you’re going to go and how you’re going to go,” Duran said, but that doesn’t mean he’s just going to go on as usual and hope for the best. He’s taking precautions like everyone else.

He only goes shopping during stores’ early-morning seniors-only hours. When he runs into friends on his morning walks at Tahoma Cemetery, they don’t shake hands anymore. They’ll say hello, but they do it from 6 or 8 feet apart. And his volunteering has changed, too.

Duran started helping out at the Yakima Rotary Food Bank after retiring from orchard work in 2006. He was one of the faces of the program, greeting people, handing out food packages, organizing other volunteers. More recently he started working more in the background, picking up donated food at Safeway on Saturdays then taking it straight to the food bank. And since the coronavirus hit, he’s not showing up at all during times when the food bank’s clients arrive to pick up food.

“I stay out of the way,” Duran said. “There’s too many people. They say on the news it’s unwise to be with a lot of people.”

He’s not going to stop entirely, though.

“All I do is stay in my yard and my house; I have plenty of time to help out,” he said. “I kind of enjoy it to tell you the truth. It makes you feel something, to help people out. I don’t know how else to say it.”

Especially at this moment in time, it seems important, Duran said.

“A lot of people need that help to survive,” he said.

• The Yakima Valley Community Foundation has launched two efforts as part of its response to the pandemic. The Yakima Valley Needs website shares nonprofits’ supply and volunteer needs so the community can respond. The Yakima Valley Resilience and Response Fund will support and sustain charitable organizations, especially those that work with the valley's most vulnerable.

• The Yakima & Kittitas Counties COVID-19 Response Fund is hosted by the United Way of Central Washington. One hundred percent of donations will go to local nonprofit organizations experiencing increased demand for services and capacity due to COVID-19.