Free access for current print subscribers
Get Started
You are the owner of this article.
Edit Article Add New Article
You have permission to edit this article.
Edit
Home
News
Bottom Line
Sports
SCENE
Photos & Video
Opinion
Obituaries
Unleashed
Classifieds
The Vanished
1 of 9 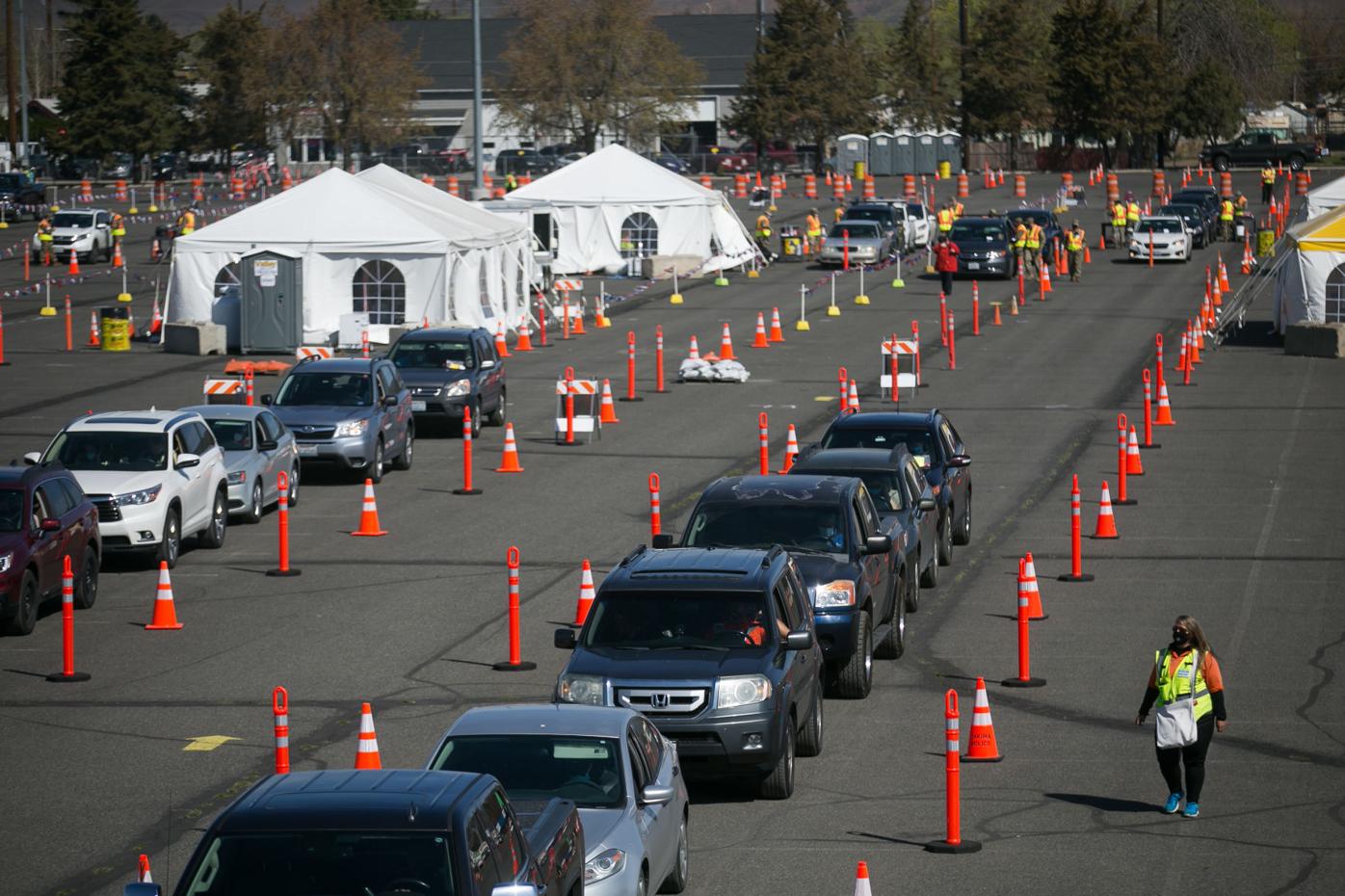 Motorists are seen parked Friday, April 9, 2021, in the 15-minute waiting area after receiving a dose of a COVID-19 vaccine at the Pilot Community Vaccination Center in the State Fair Park’s parking lot in Yakima, Wash. 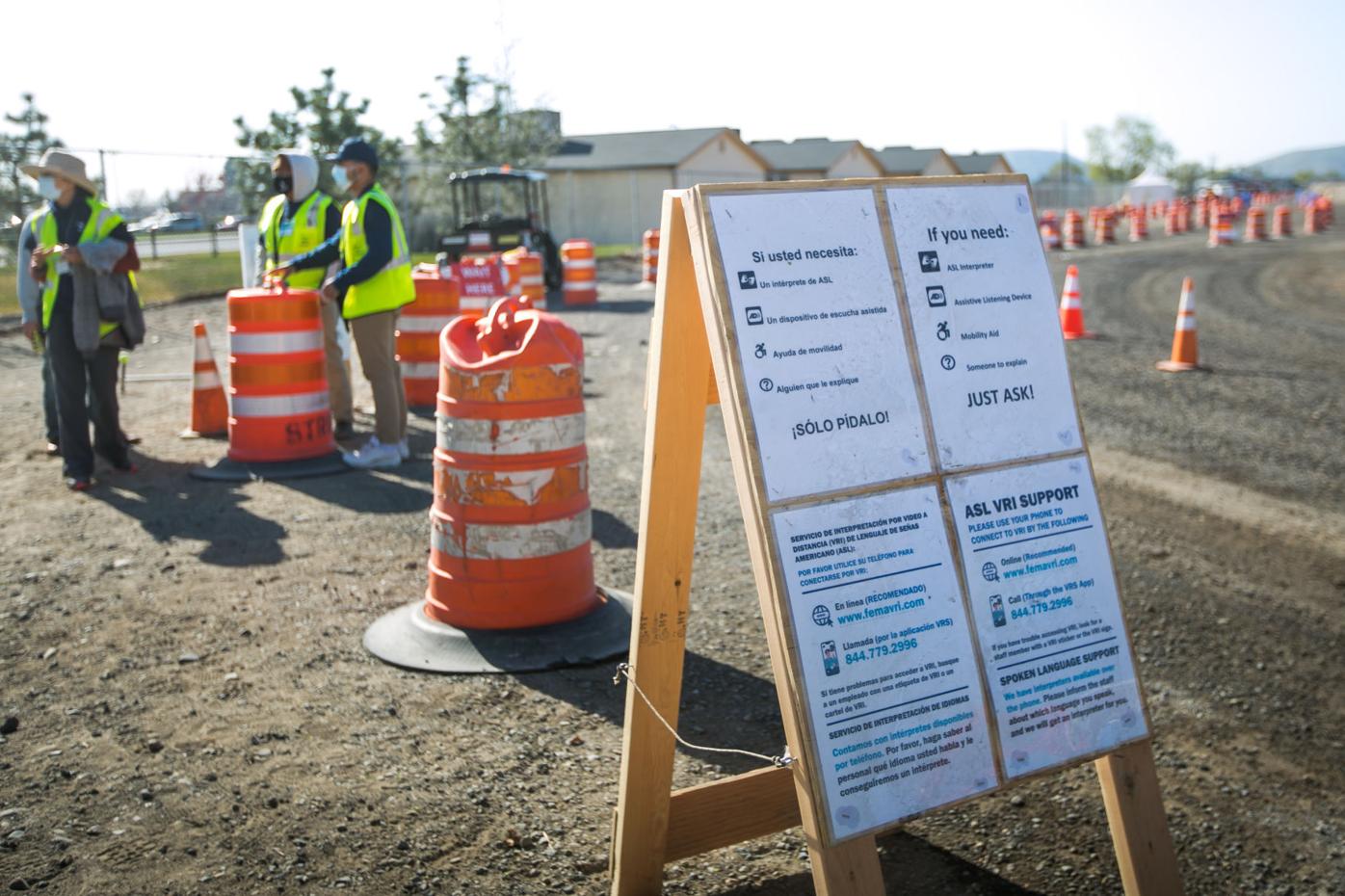 Spoken language support signs are seen in English and Spanish Friday, April 9, 2021, near the check in station of the Pilot Community Vaccination Center in Yakima, Wash. 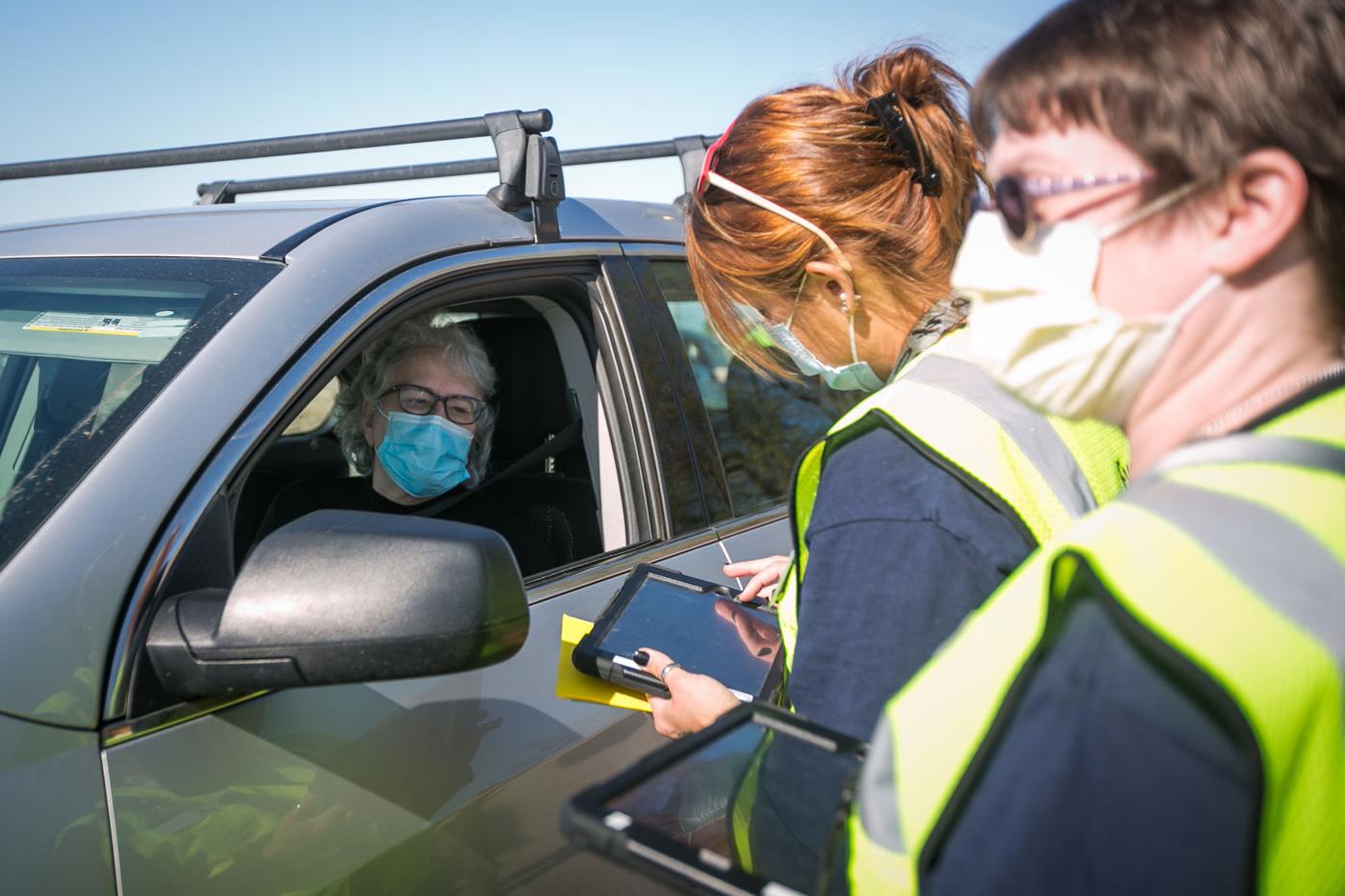 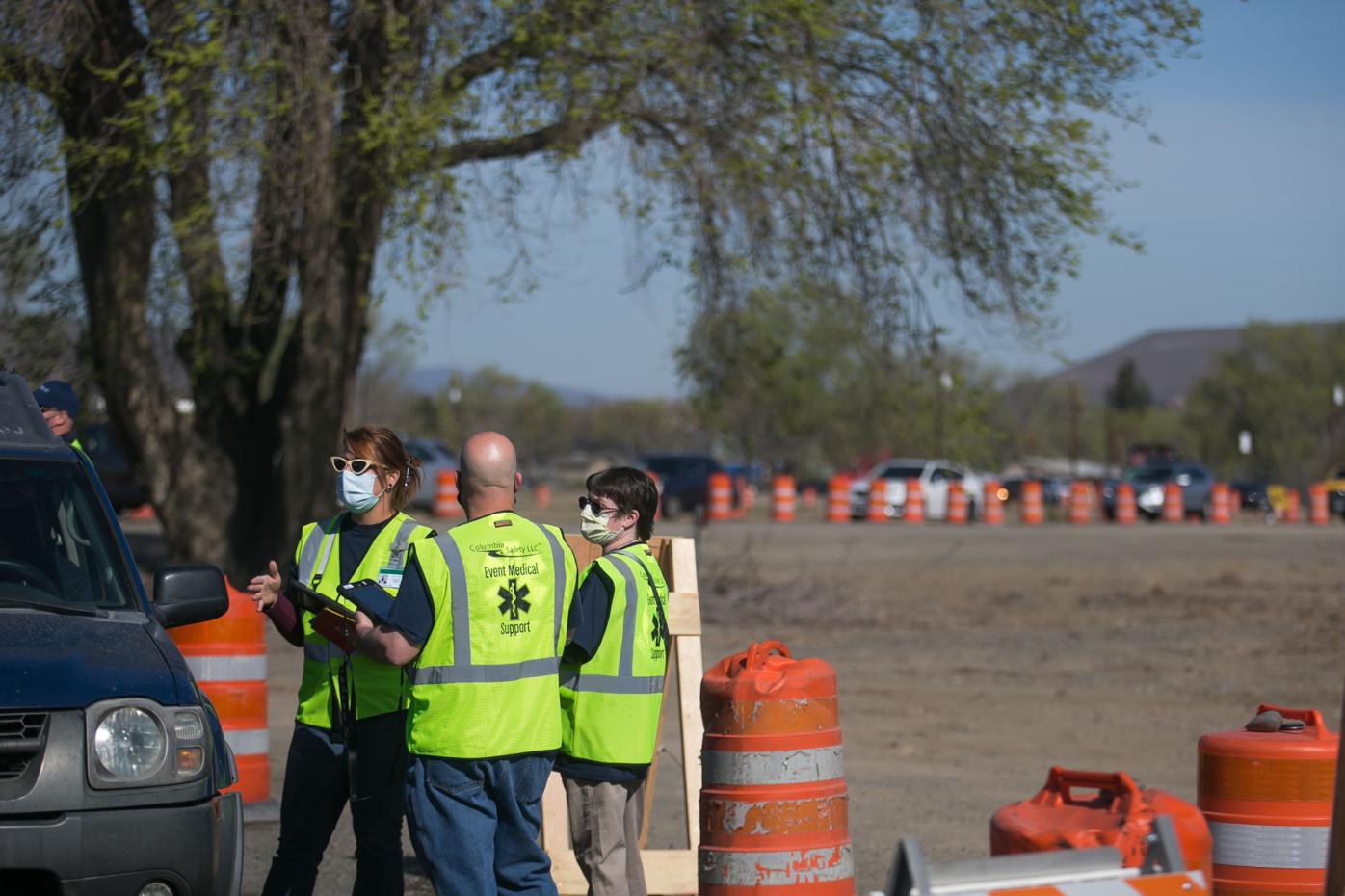 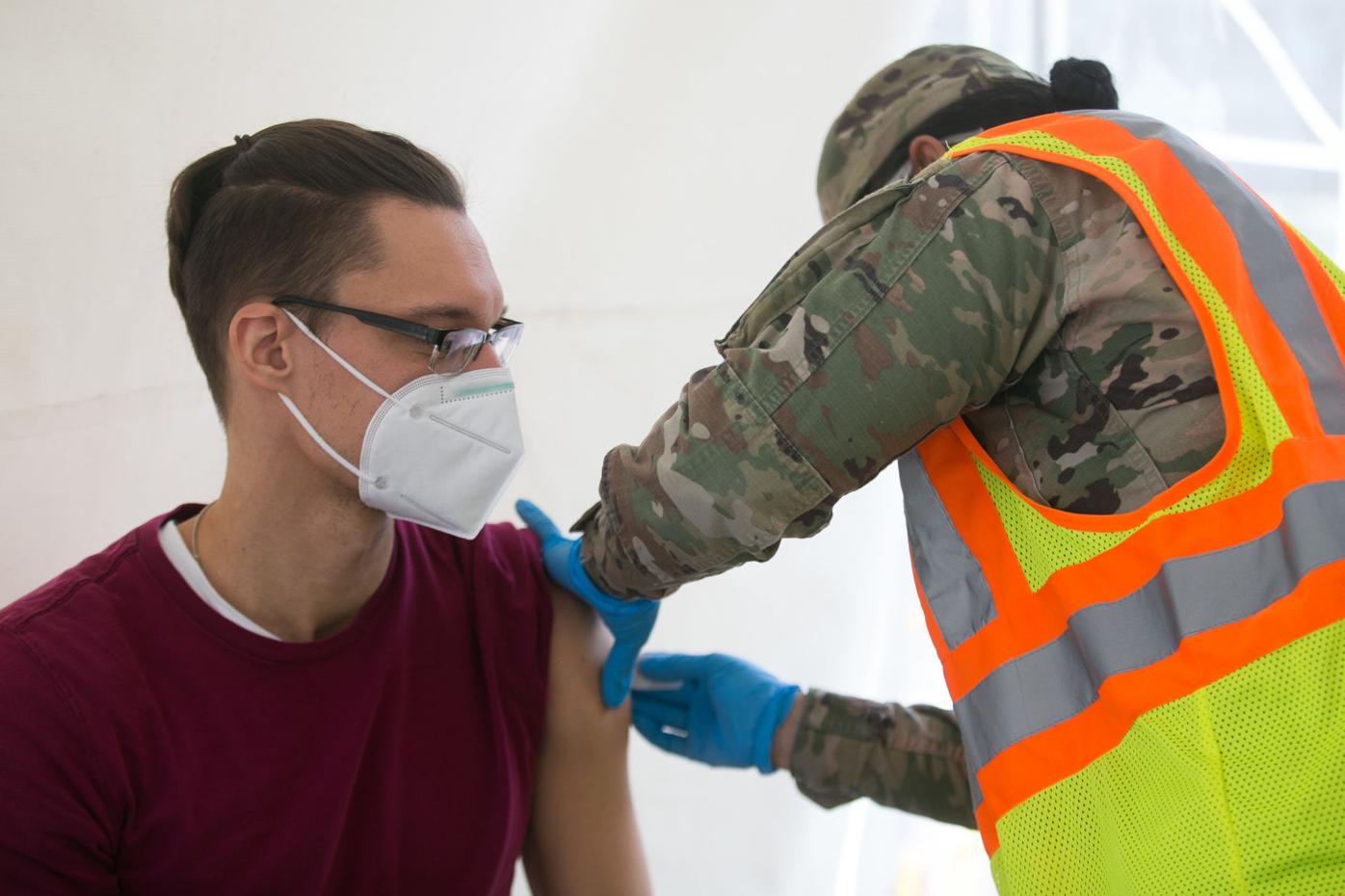 Christina Lopez, right, prepares to administer a dose of the Moderna COVID-19 vaccine to Oleg Zhukov on Friday, April 2, 2021, at the Pilot Community Vaccination Center’s walkup clinic at the State Fair Park in Yakima, Wash. 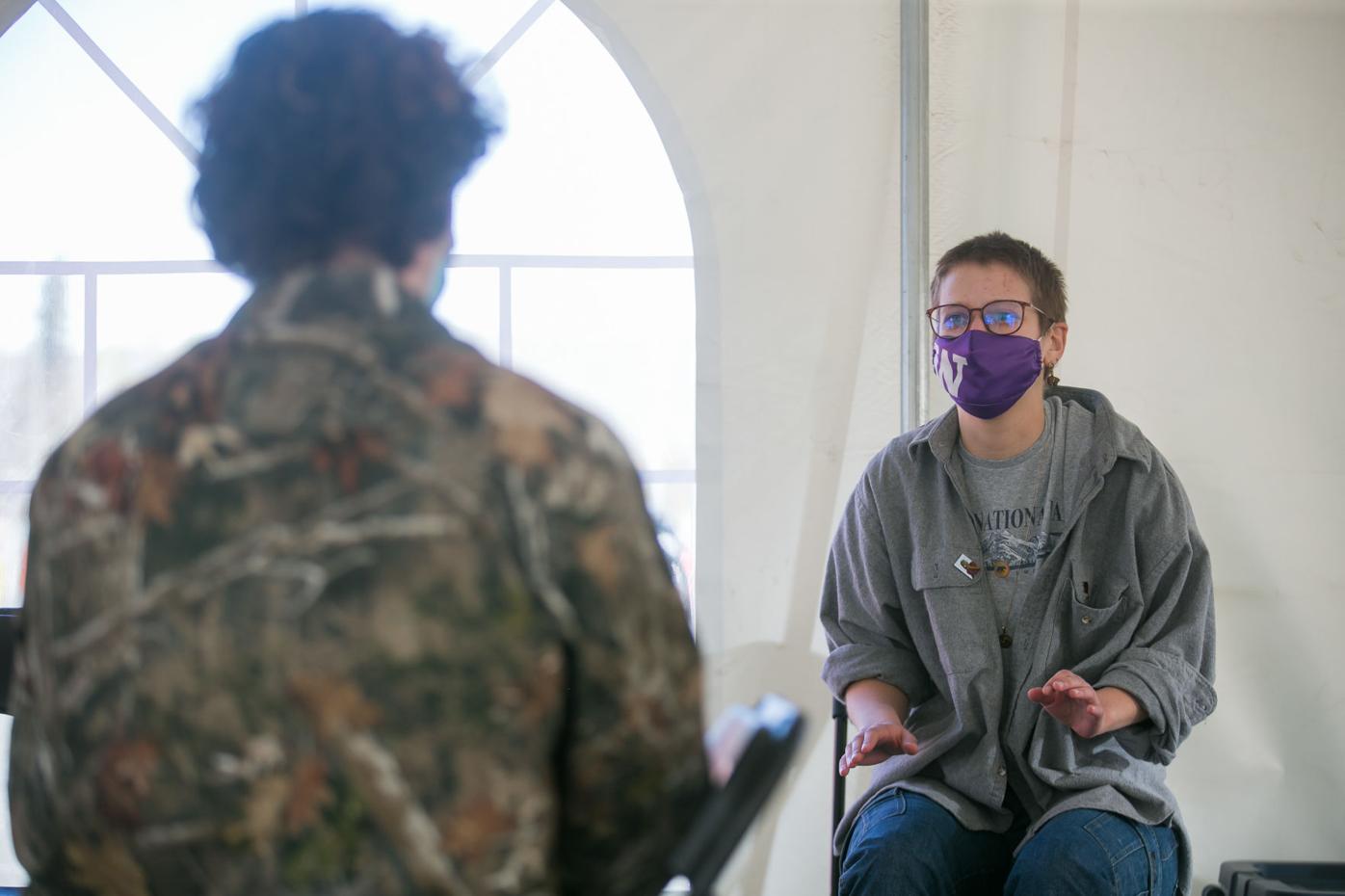 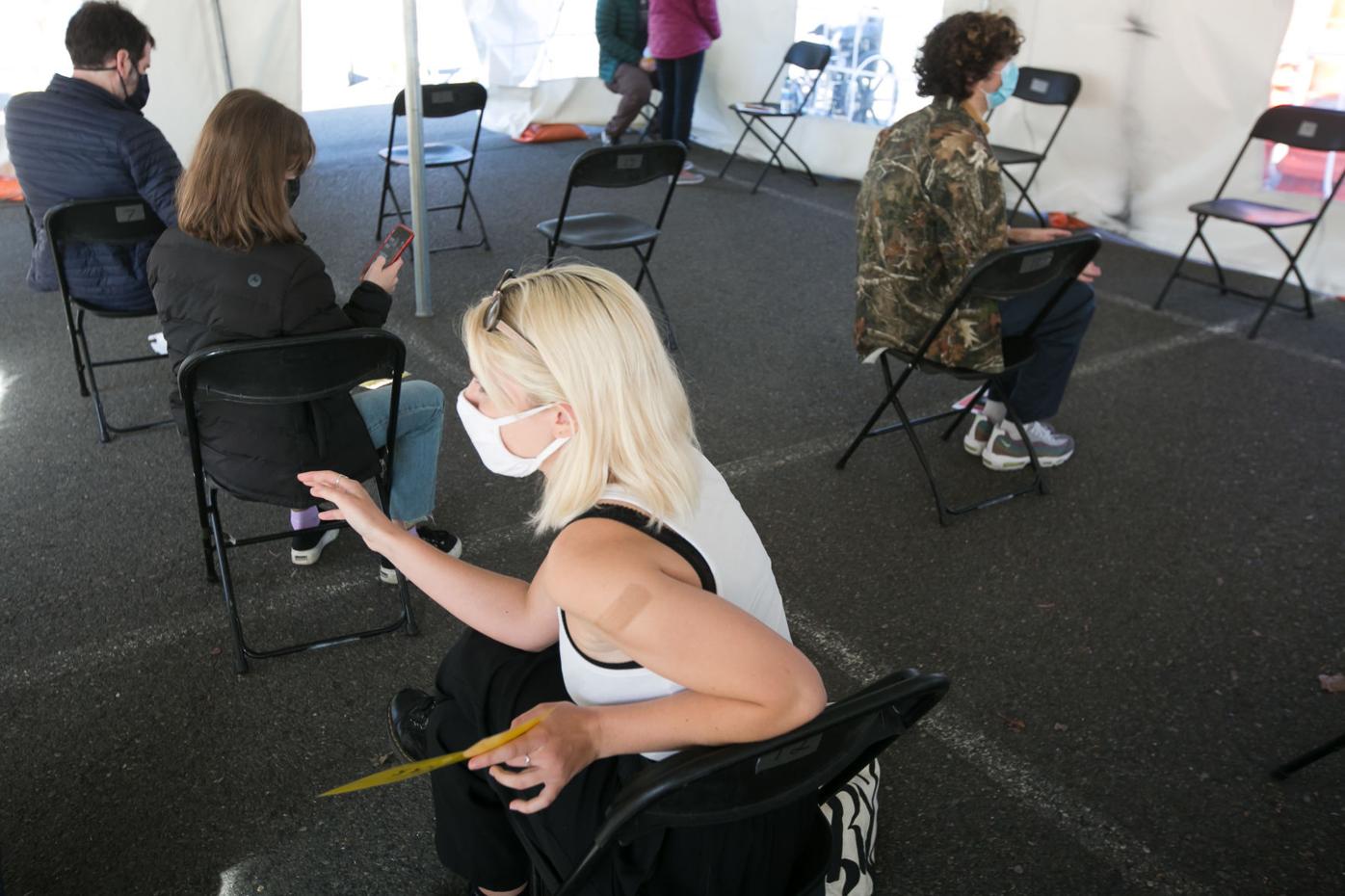 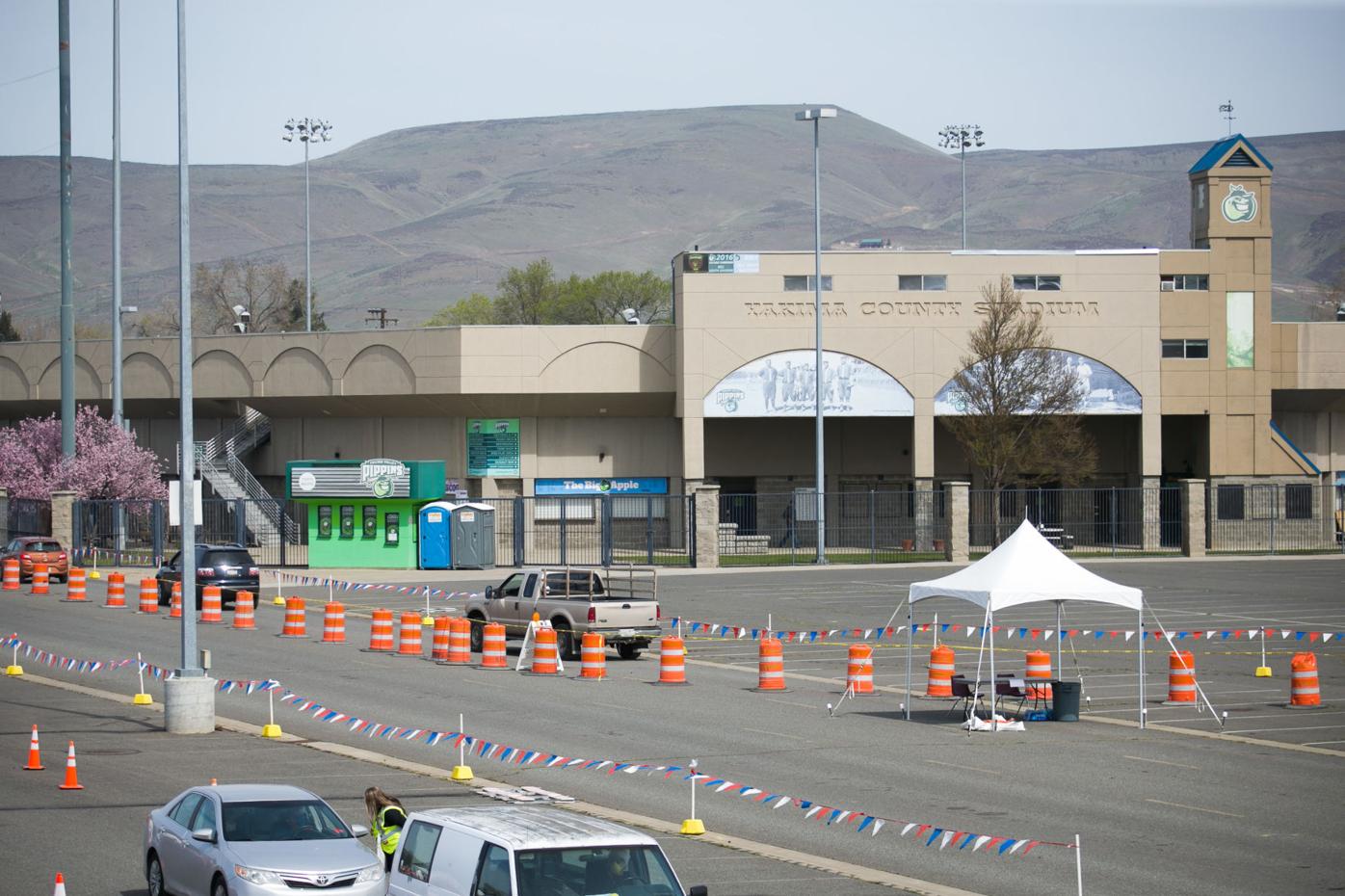 Motorists are seen Friday, April 2, 2021, at the Pilot Community Vaccination Center in the parking lot of the State Fair Park in Yakima, Wash. 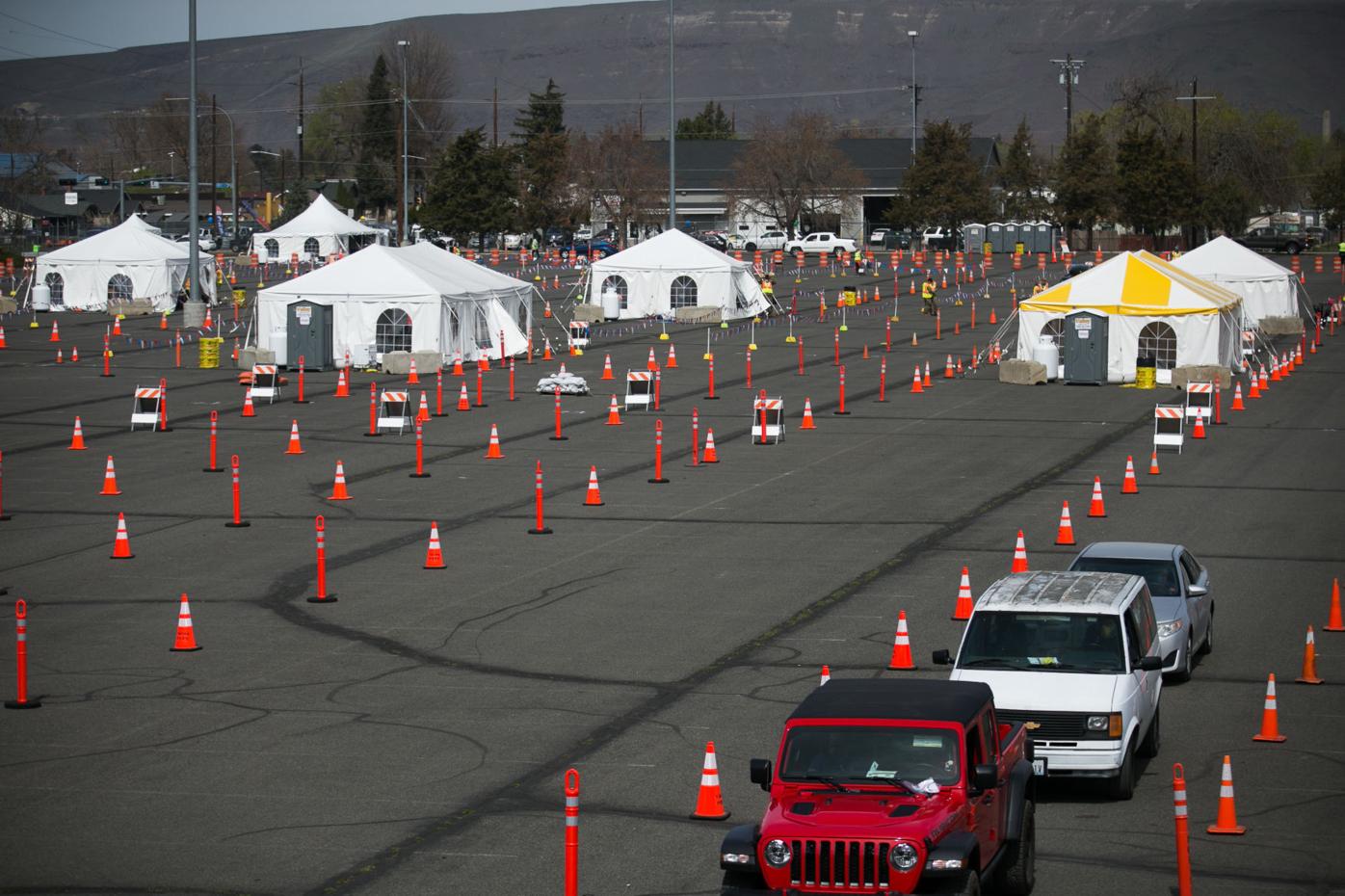 Motorists are seen parked Friday, April 2, 2021, in the 15-minute waiting area after receiving a dose of a COVID-19 vaccine at the Pilot Community Vaccination Center in the State Fair Park’s parking lot in Yakima, Wash.

Motorists are seen parked Friday, April 9, 2021, in the 15-minute waiting area after receiving a dose of a COVID-19 vaccine at the Pilot Community Vaccination Center in the State Fair Park’s parking lot in Yakima, Wash.

Spoken language support signs are seen in English and Spanish Friday, April 9, 2021, near the check in station of the Pilot Community Vaccination Center in Yakima, Wash.

Christina Lopez, right, prepares to administer a dose of the Moderna COVID-19 vaccine to Oleg Zhukov on Friday, April 2, 2021, at the Pilot Community Vaccination Center’s walkup clinic at the State Fair Park in Yakima, Wash.

Motorists are seen Friday, April 2, 2021, at the Pilot Community Vaccination Center in the parking lot of the State Fair Park in Yakima, Wash.

Motorists are seen parked Friday, April 2, 2021, in the 15-minute waiting area after receiving a dose of a COVID-19 vaccine at the Pilot Community Vaccination Center in the State Fair Park’s parking lot in Yakima, Wash.

The federal mass vaccination site at State Fair Park in Yakima, with National Guard and FEMA personnel working alongside state and local officials and volunteers to shepherd hundreds of people a day through the process, feels like history in the making.

The nearly 12,000 people vaccinated there since it opened March 31, and the thousands more who will be during the course of its scheduled eight-week run, certainly will never forget it. Nor will the workers.

“We’re doing things we never thought we’d do,” said Daris Conrad, the joint information center manager for the sprawling clinic. “I never thought I’d be out here talking to the media about vaccines. I think of my 96-year-old grandma, when I talk to her about polio and the war and the Depression and all of those things. And I just think maybe some day my kids, or my grandkids, great-grandkids will be asking, ‘Hey, what was it like back in 2020 or ’21 with the coronavirus?’

“When you’re here doing the work, you don’t think about it. But when you take a step back you’re like, ‘Wow, this is a part of history.’”

Conrad, 43, is on a 14-day contract to help run the center, taking time off from his normal gig with the Valley Regional Fire Authority in Auburn. On Friday morning he and the rest of the staff at the site — dozens of volunteers and workers from local, state and federal agencies — celebrated the site’s 10,000th vaccination.

Sherrie and Ray Schwehr of Yakima were there that morning, among the final people in that first 10,000. For them, getting vaccinated means a return to a more normal life. That includes little things like eating in restaurants, Sherrie said. But it also means big things, important things.

“My parents live in Montana, so it will be good to get it done,” she said. “I haven’t seen them in a couple of years.”

It only took about 45 minutes from the time the Schwehrs drove up to the clinic to the time they left. That’s in line with the current averages, Conrad said. Some days it’s even faster, with average time on site around 35 minutes, and that includes the required 15-minute post-shot wait. That sort of efficiency depends on the volunteers, he said. They greet the arriving cars and walk-ins, check to see if they’re preregistered, which is encouraged but not required, and sort them into lines based on that. Those in vehicles, which represent the vast majority of visitors to the site, never even leave them. They just roll down their windows and roll up their sleeves.

In addition to 1,000 federal doses each day, the site gets roughly 200 doses a day through the state. They haven’t wasted a dose, and draw them up based on demand as the day progresses. They’ve been able to find people to take the shots when they have extras. They took doses to the nearby Fiesta Foods grocery store one day, for instance, and store personnel announced it over the speakers. Some of the supply will be distributed through mobile vaccine clinics throughout the county.

Driving over the mountains

Ed Davis and Ashley Aversa, a 30-year-old couple who made the drive over the Cascades from Seattle to get their shots on Friday, said they were impressed by the scale of the operation. They had trouble finding vaccines close to home, but they figured the drive would be worth it to get the shot. Vaccination means they can travel back to the Philadelphia area to see family. That’s a tangible, practical benefit. Beyond that, the vaccines also represent the potential for a society-wide reset, a new beginning, they said.

“It feels hopeful,” Davis said. “Hopeful that we can get back to our normal lives when we didn’t have to think so carefully about seeing people.”

“And to not take things for granted in the future,” Aversa added. “When you have an opportunity to go somewhere or see someone, you should do it.”

Like Conrad, they took a moment to consider the historic nature of what they were doing. They even snapped a picture to commemorate the occasion.

“I was just commenting how it feels like we’re in a movie almost,” Davis said. “It’s really amazing, actually, how efficient the operations are here. That’s when we really felt how big of a deal this all is.”

They weren’t the only visitors from the Seattle area. Only about 35% of the people vaccinated at the federal center since it opened have been from the Yakima and Tri-Cities areas it was established to serve, Conrad said. The other 65% come from out of the area, including a significant number from Western Washington.

“The reason that Yakima and the Tri-Cities area was chosen was because of the high population of underserved people, and how hard it got hit by COVID-19,” he said.

But no one is going to be turned away because they’re from outside the area, Conrad said. There are enough doses right now for everyone who wants one; the center hasn’t run out of its daily allotment yet. That was a concern for Jules Travis, a 20-year-old University of Washington student who made the trip from Seattle early Friday with a group of friends.

Travis didn’t want to exploit a loophole or take a dose that otherwise would have gone to an agriculture worker from Yakima or someone else from an underserved population. But she looked into it and saw there were more vaccines available here than arms for them to go into, so it seemed OK. And the feeling afterward was a mixture of hope and relief.

“It feels like we’ve been standing still for a long time,” she said. “We’re all college students, so we’re excited to get back to school.”

That eagerness to get on with life was a major theme in discussions with those vaccinated Friday. Conrad was feeling that, too. Driving around the site, he reminisced about visiting Yakima to attend the Central Washington State Fair back when he was a kid.

“I hope they have it this year,” he said.

• Those eligible include restaurant, food service, construction and manufacturing workers; anyone 60 and older; and anyone older than 16 with two or more underlying conditions; people who work in agriculture, grocery stores, corrections and public transit; people who are pregnant; those who have a disability that puts them at high risk; everyone 50 and over in multigenerational households; preschool through grade 12 educators; child care providers; health care workers; first responders; and staff and residents of long-term care facilities

• On Thursday, eligibility will expand to include anyone 16 and older

• The majority of doses at the center — the 1,000 per day from the federal government — are first doses. Starting April 21, the majority will be second doses. If you have questions about whether the dose you need is available, call 800-525-0127 or visit https://www.yakimacounty.us/2472/COVID-19-Vaccine