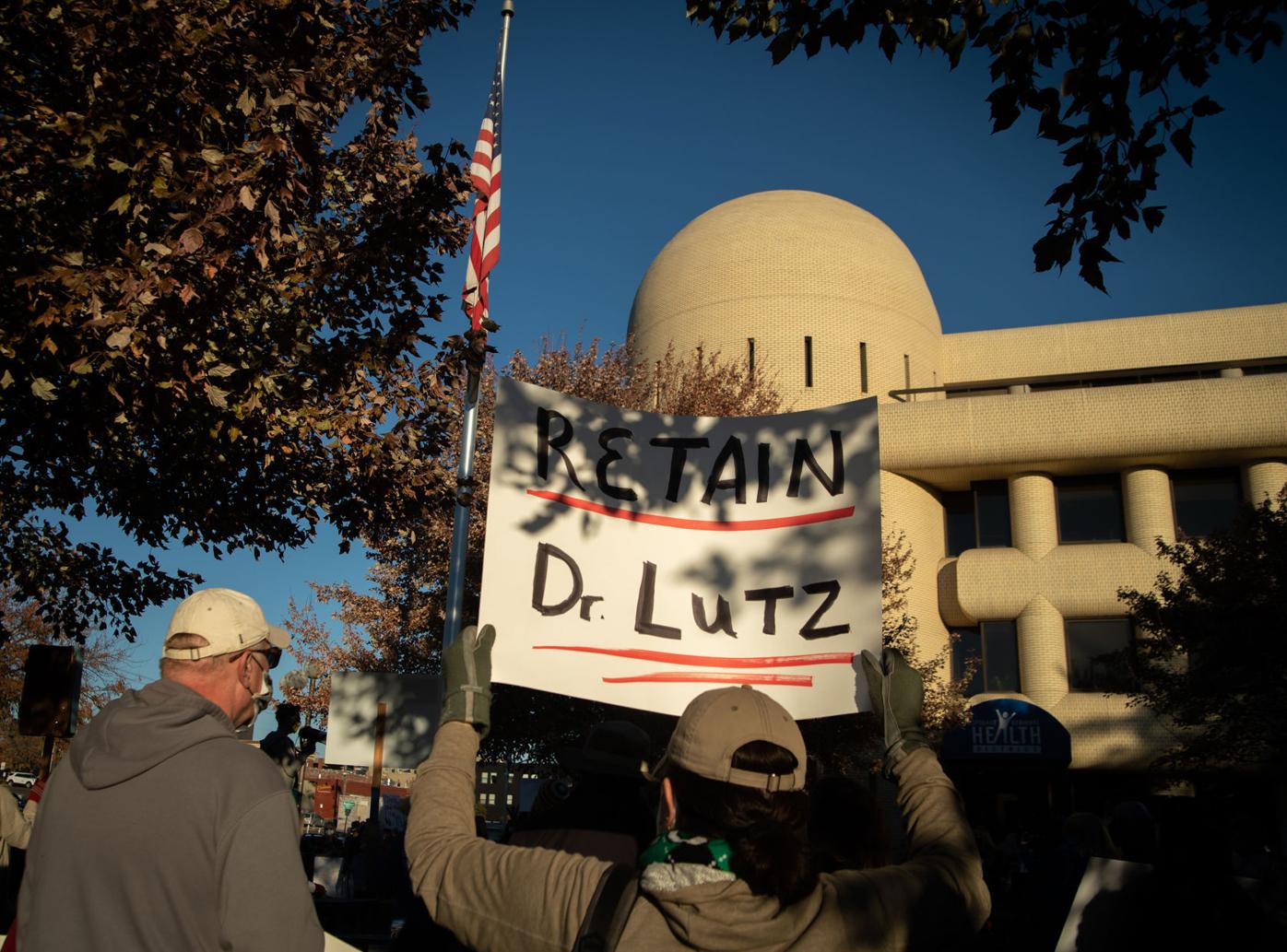 FILE — A protester holds a sign in favor of Health Officer Bob Lutz during a protest against the Spokane Board of Health's ousting of Lutz, held  Nov. 1, 2020, outside the Spokane Regional Health District office. 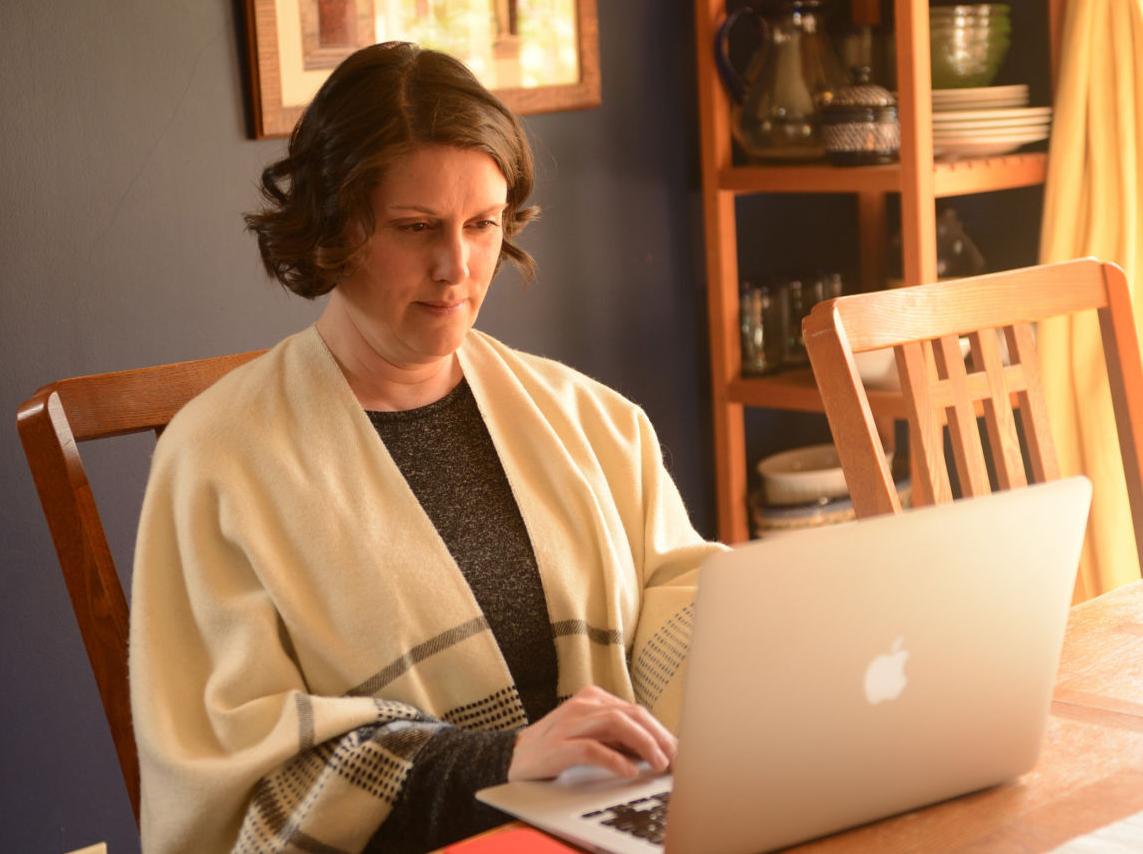 Dr. Teresa Everson joined the Yakima Health District in 2018 as health officer. Everson is also an assistant professor at Oregon Health and Science University, where she practices and teaches family medicine. She announced her resignation as health officer Tuesday, Nov. 3, 2020.

FILE — A protester holds a sign in favor of Health Officer Bob Lutz during a protest against the Spokane Board of Health's ousting of Lutz, held  Nov. 1, 2020, outside the Spokane Regional Health District office.

Dr. Teresa Everson joined the Yakima Health District in 2018 as health officer. Everson is also an assistant professor at Oregon Health and Science University, where she practices and teaches family medicine. She announced her resignation as health officer Tuesday, Nov. 3, 2020.

Public health officials throughout Central and Eastern Washington have resigned or have been fired in recent weeks as coronavirus case counts reach record highs.

They join dozens of veteran health officials around the country who are leaving their roles. Many in the profession are facing mounting pressure and exhaustion, experts say.

Spokane County's Health Officer, Dr. Bob Lutz, was fired in early November, The Spokesman-Review reported. Lutz released a statement through his attorney, saying he “believes his termination ... was politically motivated in retaliation for unpopular COVID-19 decisions.” His departure has been contested by colleagues and supporters, who have held rallies to protest his dismissal.

DeBolt declined to comment publicly on her departure after four years on the job, but upon her new appointment as executive director of the nonprofit Blue Zones Project in Walla Walla, she noted that public health agencies are subject to what she called distractions, such as funding issues, politics and the unrelenting work.

Some officials are leaving for personal reasons, among them State Health Officer Dr. Kathy Lofy, who plans to step down later this year. In her departure announcement, she said she wants to focus on being a mom, improve her health and reconnect with friends and family.

Yakima Health Officer Dr. Teresa Everson, whose last day is Friday, said she was leaving with heavy heart. “Unfortunately, my family and I can no longer sustain the costs of this position,” she said in a statement.

In the Tri-Cities, a change.org petition is live to oust health officer Dr. Amy Person, who remains in office.

If a global pandemic hadn’t made the job hard enough, being thrust into a challenging decision-making process in an era where science has become highly politicized is making it harder, according to experts.

Cassie Sauer, CEO of the Washington State Hospital Association, an organization that partners with hospitals across the Northwest to improve their performance, said she’s been disheartened by the treatment of public health leaders throughout this crisis as they’ve sought to keep their communities safe.

“I bet you couldn’t find a public health official who hasn’t received death threats or haven't had people picketing outside their homes. They’re being called terrible names, told they are liars when they’re not, that they’re infringing on people’s personal freedom ... all the conspiracy theories that are flying around often get leveled at public health leaders,” she said.

“There were staff across our state who were working 80-90 hours weeks, seven days a week for months, dealing with extreme exhaustion while at the same time experiencing the pandemic just like everybody else,” she said.

Coronavirus has been a worst-case scenario for public health workers. Everyone is a beginner in COVID-19: Many agecies had to learn how to deal with the crisis as it unfolded and information evolved.

What do health officials do?

In Washington, at the local level, a public health officer works with a team of directors and officers. Washington has a decentralized health system, so counties or districts are responsible for delivering these services.

Public health officers are physicians who develop evidence-based plans for communities in times of emergency. Like a doctor might issue a prescription for a sick patient, they prescribe measures to protect the community, such as staying indoors, away from wildfire smoke. In smaller communities, this can be a part-time position. Some health officers cover more than one county.

Administrators and directors implement those plans. They oversee the health department or district.

Boards of health are made up of elected officials such as mayors, commissioners, other county officials and community members. The boards direct additional services and programs that they deem important in their community, set policy and approve a budget.

These tasks are funded by federal, state and local allocations that can be limited in scope. A crisis like the pandemic requires a large amount of financial support, which is why the Coronavirus Aid, Relief, and Economic Security Act, or CARES Act, was passed in March. But that reservoir will run out at the end of the year while the pandemic continues.

“I think our officials have been heroes throughout this pandemic," Sauer said. "They have prevented massive amounts of infection and death and I wish the public would believe in them, stop listening to the conspiracy theories, and take heed of what they are asking them to do because it is so important. If they don’t, the consequences could be dramatic,” she said.

Sheila Hagar of the Walla Walla Union-Bulletin contributed to this report.