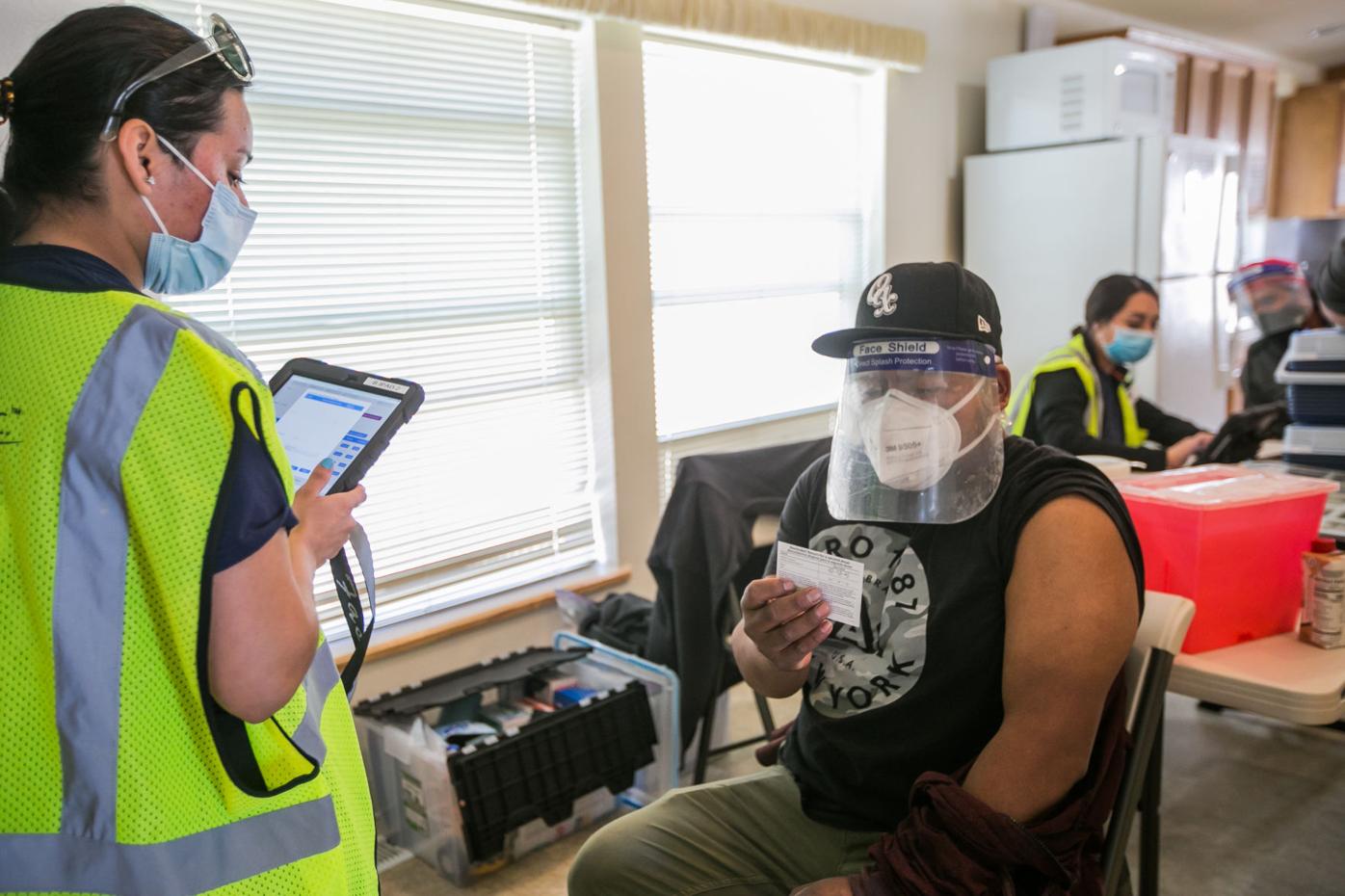 FILE—In this photo taken on Monday, April 12, 2021, David Gonzalez, right, reads his COVID-19 record card before receiving a dose of a Pfizer COVID-19 vaccine at a pop-up vaccination clinic on a Matson Fruit farm in Selah, Wash. 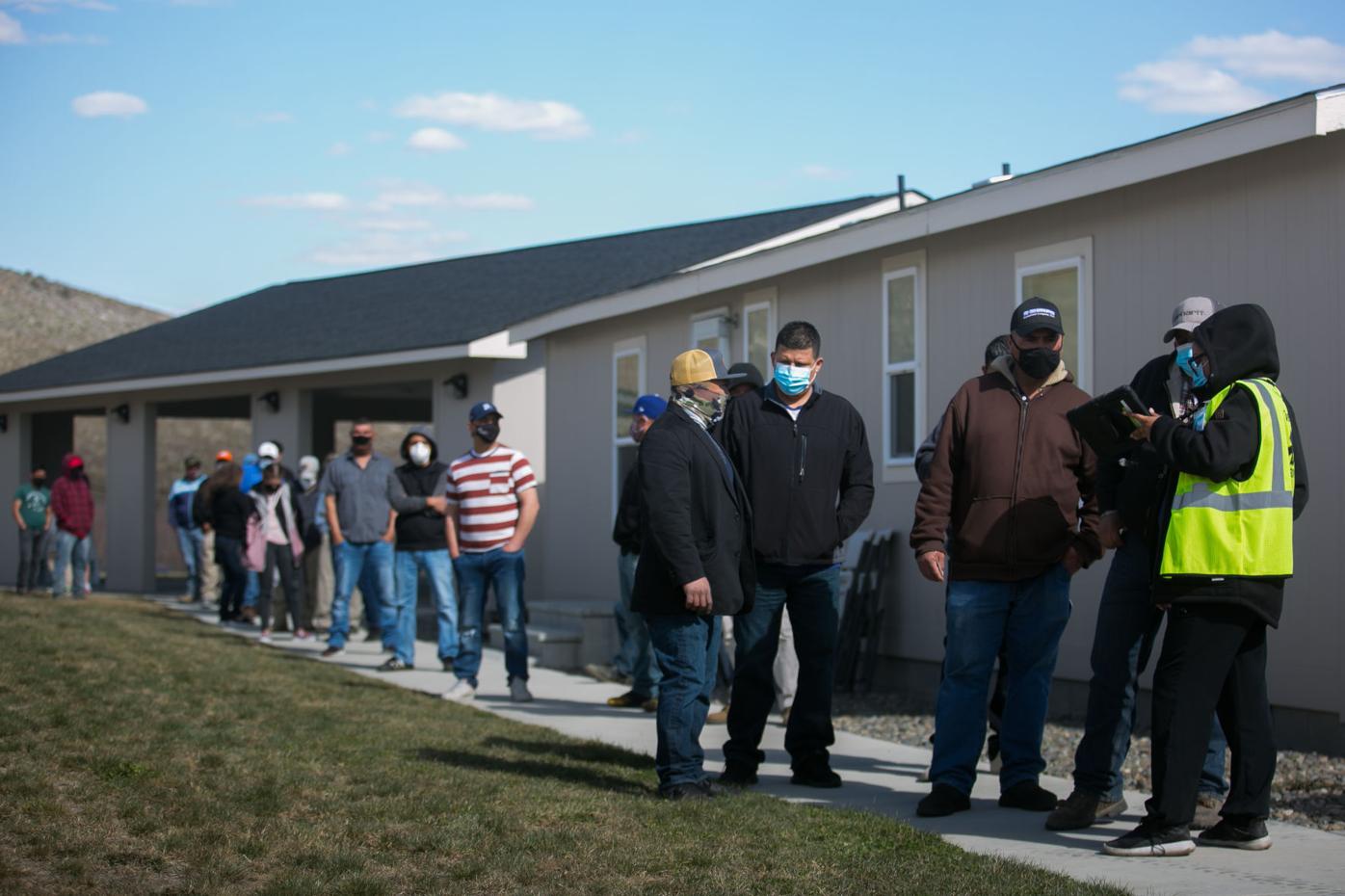 FILE—In this photo taken on Monday, April 12, 2021, domestic workers socially distance as they wait in line to receive a dose of a Pfizer COVID-19 vaccine at a pop-up vaccination clinic on a Matson Fruit farm in Selah, Wash. 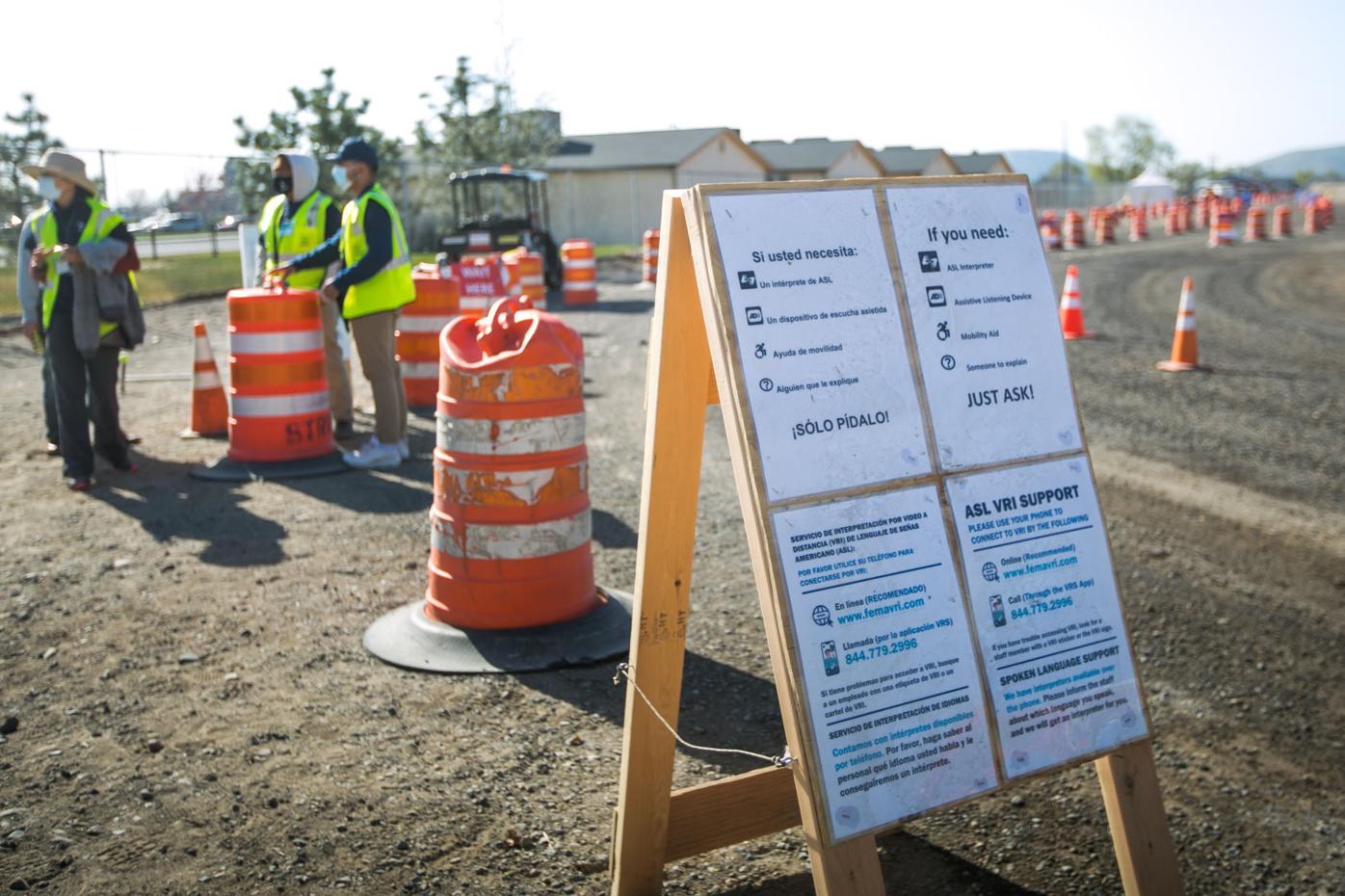 FILE—In this photo taken on Friday, April 9, 2021, spoken language support signs are seen in English and Spanish near the check in station of the Pilot Community Vaccination Center in Yakima, Wash. 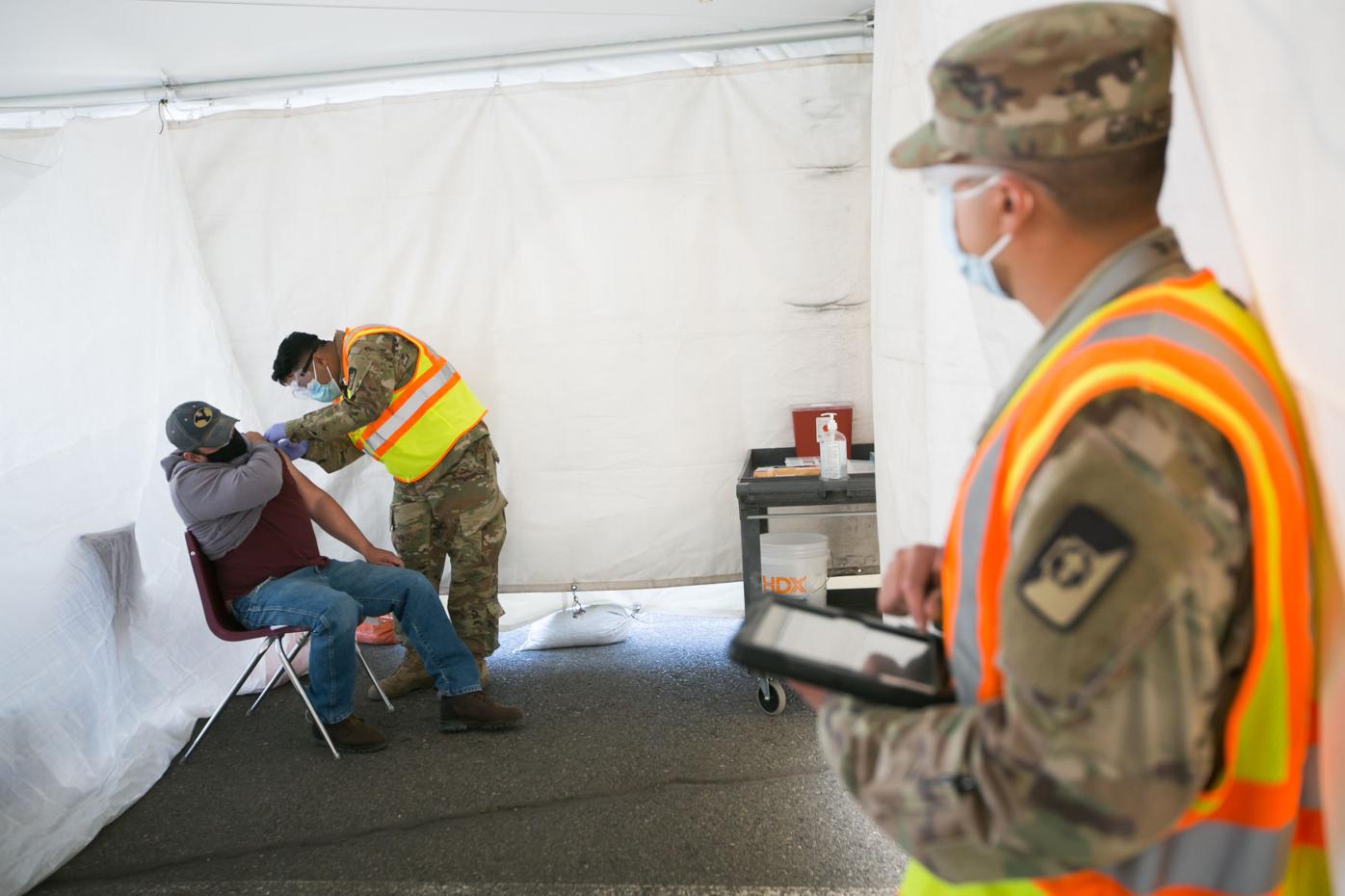 FILE—In this photo taken on Monday, April 12, 2021, David Gonzalez, right, reads his COVID-19 record card before receiving a dose of a Pfizer COVID-19 vaccine at a pop-up vaccination clinic on a Matson Fruit farm in Selah, Wash.

FILE—In this photo taken on Monday, April 12, 2021, domestic workers socially distance as they wait in line to receive a dose of a Pfizer COVID-19 vaccine at a pop-up vaccination clinic on a Matson Fruit farm in Selah, Wash.

FILE—In this photo taken on Friday, April 9, 2021, spoken language support signs are seen in English and Spanish near the check in station of the Pilot Community Vaccination Center in Yakima, Wash.

For the last several weeks, Yakima Neighborhood Health Services has dispatched its mobile vaccine units to just about anywhere in Yakima County.

The community health center has focused primarily on the Lower Yakima Valley and has gone to small communities, including Harrah, nearly 20 miles from its Yakima headquarters. It’s coordinated with local growers, providing vaccines to workers and their families.

The clinics were possible thanks to a $25,000 grant from the All in WA organization.

“We have a lot of vaccines, and we’re willing to go anywhere in the Valley,” said Rhonda Hauff, Neighborhood Health’s CEO.

It’s a stark contrast to just a few months ago when Neighborhood Health didn’t have enough doses for everyone who wanted the vaccine.

“Phones were ringing off the hook,” she said. “People who wanted it were beating down the doors to get it.”

That’s not the case now: “We sort of hit that tipping point locally where we have more supply than demand,” Hauff said.

Neighborhood Health is just one of several providers ready to travel to get COVID-19 vaccines into arms. The Yakima Valley Farm Workers Clinic has partnered with agricultural employers to hold on-site clinics. The Yakima Health District, Yakima Valley Memorial Hospital and Astria Health have offered pop-up clinics in Tieton, Sunnyside, Granger and other areas in the Lower Valley, setting up at schools, community centers and parking lots.

Clinics encourage making appointments, but walk-ins are usually welcome. Another round of pop-up clinics is planned around the county this week.

These providers are now up against vaccine hesitancy among the public. And with additional obstacles, real or perceived, in accessibility, language and cultural beliefs, there’s a concern that not enough farmworkers — and members of the greater Latino community — are getting vaccinated in the Yakima Valley.

“If we want to go back to normal, we need to get the vaccine,” said Lilian Bravo, director of health care partnerships for the Yakima Health District. “We need the majority of the community to get that vaccine.”

Zaira Sanchez, emergency relief coordinator for the UFW Foundation, conducted a health survey where 10,000 farmworkers — including more than 2,200 in Washington state — responded to 11 questions regarding COVID-19 and the vaccine. According to Sanchez, 73% of those who responded answered favorably to getting vaccinated.

Elizabeth Strater, director of strategic campaigns for United Farm Workers, says there has been support from larger employers who offer paid time off or monetary incentives for employees to get their vaccinations, and many have had the support needed to get vaccinated.

But Strater said people employed in smaller farms are having issues.

“(Those) who on average work six days a week, very long hours in those six days, they are not going to go to Yakima to go into the fairgrounds, to a big site during the week. It’s just not accessible,” Strater said.

“This is a demographic of people that have a very reasonable reticence to, for instance, go to a FEMA site where the National Guard is posted.”

Latinos make up half of Yakima County’s population. Vaccine information by race and ethnicity isn’t currently available at a county level, but 52% of Yakima County residents who visited the State Fair Park federal vaccine site or its mobile clinics said they were Hispanic or Latino, according to the Yakima Health District.

Latinos are visiting “at the rate we expect them to,” said Bravo of the Yakima Health District. “But we also know there are very real concerns community members have with our federal partners.”

No documentation or identification is required to receive a vaccination, to put people at ease, but the uniforms can be a barrier for some, she said.

The Yakima Health District is working on a new public service campaign with the local Univision station and Radio KDNA, the Granger-based Spanish language radio station, aimed at providing more information about the Department of Defense employees who work at the mass vaccination site at State Fair Park and mobile clinics, said Stephanie Badillo-Sanchez, communications specialist with the Yakima Health District.

“We want to bring more awareness so the community is aware of who they’re interacting with,” she said.

Badillo-Sanchez said the State Fair Park site is now open from noon to 8 p.m. daily, which should accommodate most people’s work schedules.

“We’re trying to reduce as many barriers for our community to continue accessing the (vaccine) site,” she said.

Getting the message out

Zaira Sanchez and Strater have both seen first-hand an even greater struggle for farmworkers: the language barrier. Sanchez mentioned that when the UFW Foundation visits vaccination sites to hand out information from their organization’s booth, they usually end up offering translation and interpretation services.

“As an organization, when we show up to support these events, we get asked to help interpret, when we were hoping to talk to farmworkers and be more of a resource,” Sanchez said. “It shows how, whoever is putting up these events, they don’t have things set up in an appropriate manner.”

Strater also noticed that in the clinics she attended with her agency, most of the vaccinators did not speak Spanish, adding to the cultural gap.

Being able to express anxieties in your own language can help during any process, Sanchez said. Many times past experiences hinder the vaccination process, but having a professional reassure you in your primary language can ease the anxiety and change the experience.

“The ‘señores’ (older gentlemen) tend to be more expressive about how scared they are simply for the injection, though. It really isn’t about what’s in the vaccine, (it’s) ‘I’m afraid of needles,’” Sanchez said. “We kind of laugh at it together.”

The State Fair Park site has bilingual staff, and local health care providers say they have worked to make sure bilingual staff members are available at vaccine clinics.

“As a community health center focused on providing care to our populations in the best way possible, we provide bilingual staff at all our locations, every clinic and event where we are serving patients whose first language is not English. So not only in our clinics, but our off-site vaccine clinics, and even at community events,” said Lori Kelley, senior director of quality at Yakima Valley Farm Workers Clinic. “We make sure our signage, our staff and other materials are all in a language that is going to best serve our patients. For the Yakima Valley, that means everything we have in English is also in Spanish.”

Hauff said Neighborhood Health makes sure that bilingual staff are on hand at its clinics and mobile vaccination sites.

Hauff said Neighborhood Health has been working with local growers to schedule vaccination clinics during the day, and growers have allowed workers to take time from their day to receive the vaccine.

“Convenience is a big deal,” she said. “We’re doing what we can to make it as convenient as possible for people to get their vaccine.”

Still, the Latino community, like the general public, has also been caught in misinformation that has contributed to hesitancy, Hauff said. She said the focus now will be on education, informing the public of the benefits of vaccination, and responding to any concerns regarding safety.

Those who have been vaccinated will play a role in getting the word out. People are more inclined to trust people they know, Hauff said.

“The people in the smaller communities we’re going to; the people who work in the farms who signed up (for vaccines) — we hope they’ll be our messenger,” Hauff said.

Local community organizations that have assisted Latino residents in teaching English, citizenship classes and GEDs are using that experience to provide COVID-19 vaccine information to those who have doubts and fears.

Recently, Nuestra Casa in Sunnyside co-hosted a vaccination clinic at the Sunnyside School District office, where 150 doses of the Pfizer vaccine were offered. The organization had bilingual staff on hand to answer questions and offer translations.

Karla Rodriguez, civic engagement and leadership coordinator, said the organization has focused on providing Spanish information about resources available during the pandemic, and that work continues with the COVID-19 vaccine.

“The vaccine questions have arisen among our community such as where to get the vaccine, how to make an appointment, etc.,” she said. “The Nuestra Casa team has always been available to help answer these types of questions.”

La Casa Hogar, a Yakima-based nonprofit serving the Latino community, was awarded $25,000 from the All in WA organization to provide linguistic and culturally appropriate vaccine outreach. Laura Armstrong, director of La Casa Hogar, has kept the organization involved internally and externally with vaccine updates. That effort included making thousands of phone calls keeping the community informed and educated.

“The core asset is relationships and relationships in the community that we serve,” she said. “We’re mobilizing our entire team to do a series of phone calls, one-on-one calls to the families we are connected to.”