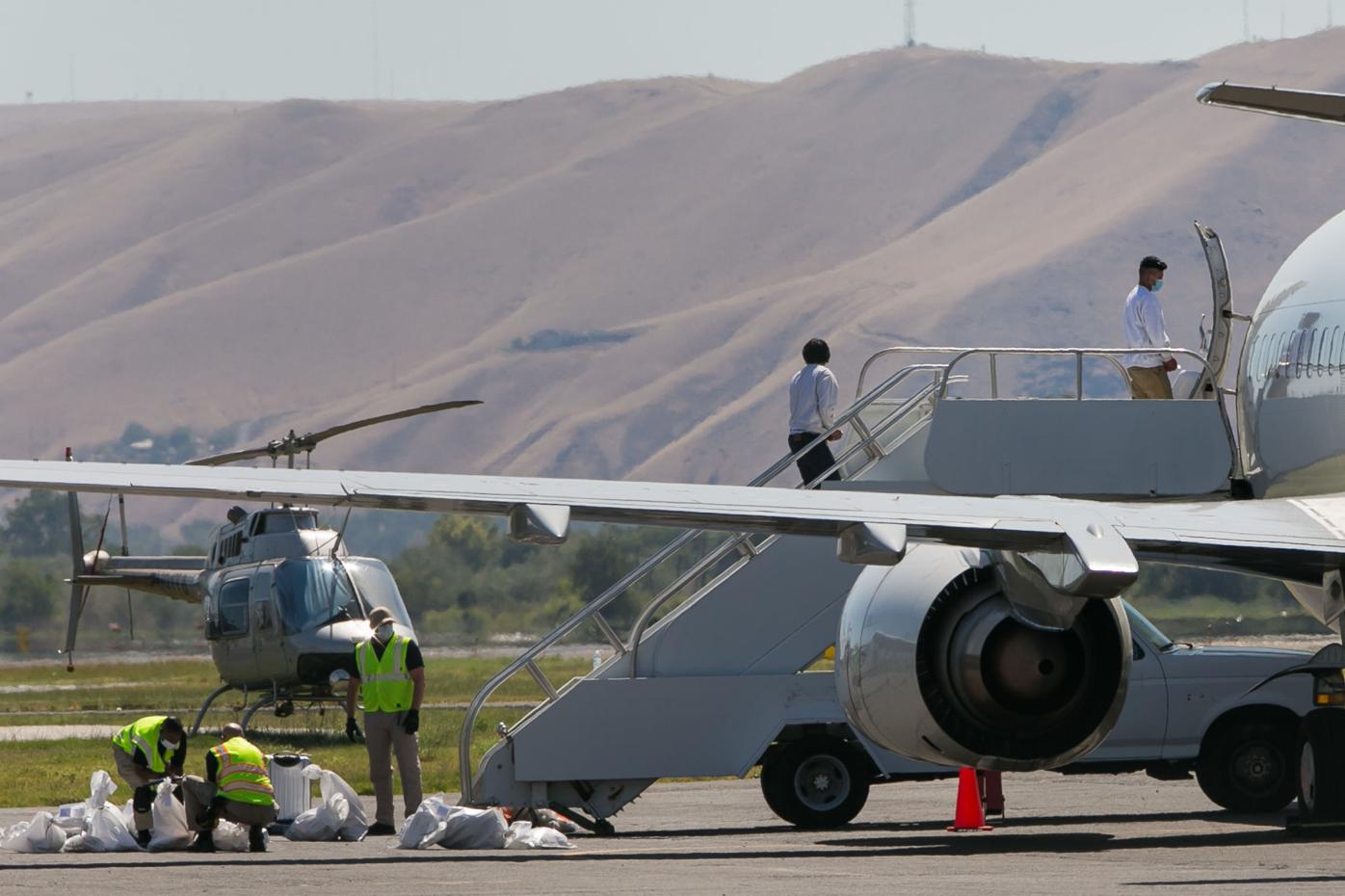 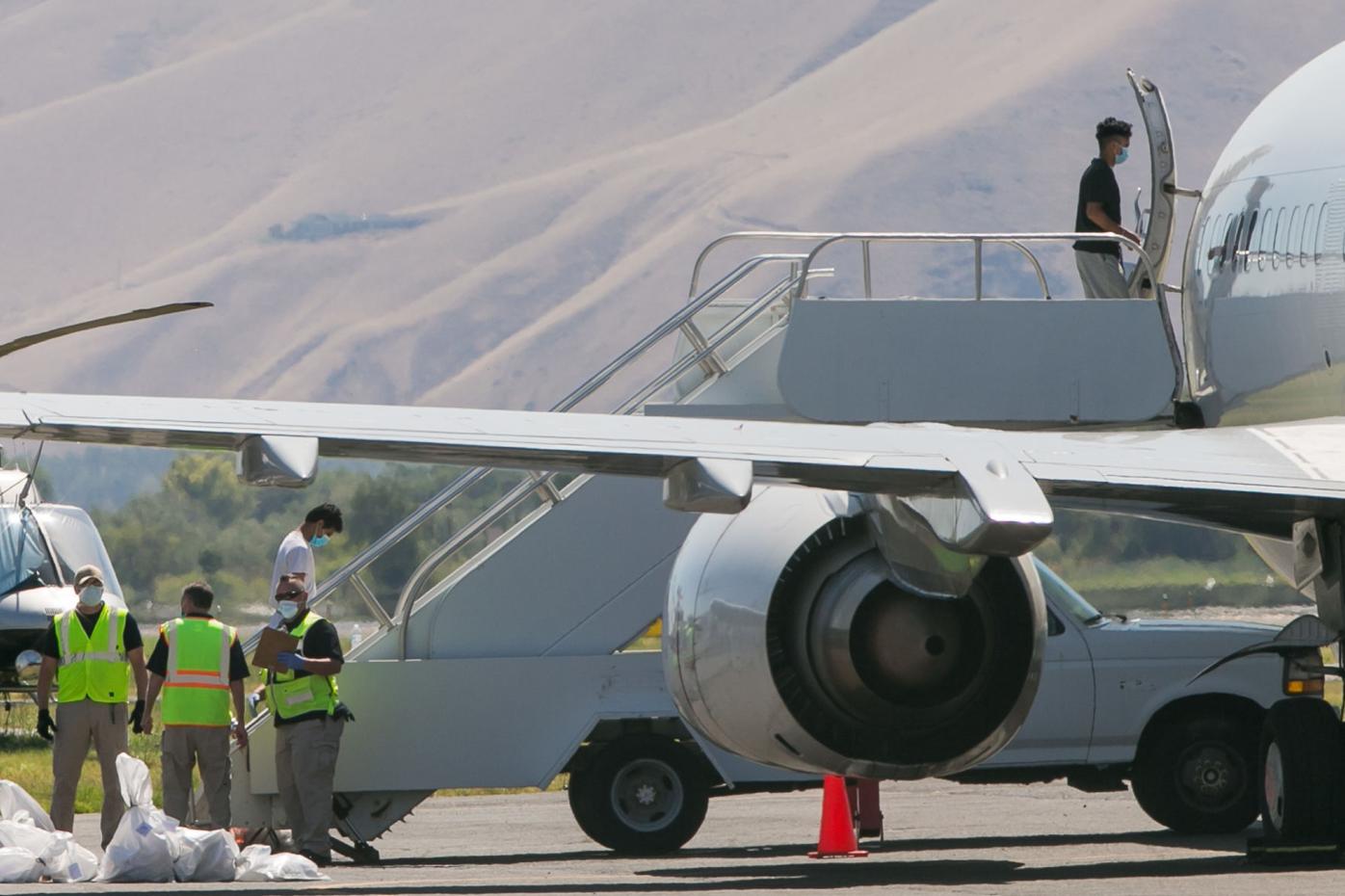 Fewer detainees are flying in and out of Yakima on flights chartered by U.S. Immigration and Customs Enforcement this year compared to last. The flights, which have been a source of local controversy, likely will continue on a weekly basis through the start of 2021.

The flights continue to operate out of the Yakima Air Terminal at McAllister Field amid the COVID-19 pandemic, transporting people from the Northwest ICE Processing Center in Tacoma, also known as the Northwest Detention Center.

From January through July 20, 28 flights chartered through Swift Air have flown in and out of Yakima. Flights have arrived mainly from Mesa, Ariz., but also from Denver and Las Vegas, and generally departed to Las Vegas, but also to Mesa and El Paso, Texas. People arrived from or were transported to the Northwest Detention Center in Tacoma.

More than 100 detainees have arrived on flights coming into the airport and at least 971 have flown out this year, according to estimates kept by airport staff.

Most flights have touched down on Tuesdays, though a few flights also have arrived on Mondays and a Sunday.

Those estimates are slightly lower than numbers logged by the Yakima Immigrant Response Network, a Yakima County-based group of volunteers working to support immigrant communities throughout the Yakima Valley. Data logged by YIRN estimates at least 169 detainees have deplaned and boarded buses to the Northwest Detention Center in Tacoma and about 1,029 detainees have arrived from the Northwest Detention Center and then boarded the planes.

The numbers for the seven-month period from January through July are much lower than the period from May 7 through November 2019, when the flights started. During the initial seven months, YIRN estimated more than 2,850 people were transported to or from the Yakima airport.

On its website, ICE notes the pandemic has changed some of its operations, including the number of those detained in facilities nationwide and newly implemented screening procedures to protect staff and detainees from COVID-19, which could have affected those numbers.

“The health, welfare and safety of detainees is one of the agency’s highest priorities,” ICE’s website said.

ICE started chartering flights through Yakima’s airport on May 7, 2019, after fixed base operators at Boeing Field in Seattle stopped servicing the flights following an executive order from King County’s Dow Constantine.

The U.S. Justice Department sued King County in February to move the flights back to Boeing Field, but the jury trial — currently slated for eight days — isn’t scheduled to start until mid-February 2021. The lawsuit, filed in the U.S. District Court for the Western District of Washington, cited the Constitution’s supremacy clause and federal law that prohibits counties from discriminating against federal contractors or obstructing the enforcement of federal immigration laws.

The city of Yakima rejected taking steps similar to King County’s last year, with city officials citing concerns that prohibiting the flights could impact the airport’s federal grant funding and open the city to litigation.

ICE has cited drawbacks to operating out of Yakima’s airport, including longer travel times and possible problems with inclement weather in traversing mountain passes during winter months. The agency declined to say whether it has searched for an alternative operations center, citing the pending litigation, but offered the following statement.

Due to COVID-19, Yakima’s airport has temporarily suspended access to its maintenance facility, which the Yakima Immigrant Response Network used to observe the flights. The network has shifted its vigils to the parking lot of Valley Lock and Key on Washington Avenue, where a small number of members continue to record their observations of the flights.

“We are heartbroken as each plane lifts into the air, carrying people away from their dreams, and wonder how the undocumented population on the whole can be labeled ‘essential’ and ‘illegal’,” said Michele Nelson Janke, a member of YIRN.

Airport Administrator Rob Peterson said the group has been understanding of the city’s measures to protect people and staff from COVID-19.

“The public viewings of the aircraft operations can be conducted outside the airport’s security fence as long as it doesn’t interfere with airport operations,” Peterson said.

ICE’s website emphasized that the agency is not carrying out enforcement operations near health care facilities, including hospitals, doctor’s offices and accredited health clinics, “except in the most extraordinary circumstances.”

Starting in March, ICE convened a working group of medical professionals, disease control specialists, detention experts and field operators and used guidance from the Centers for Disease Control and Prevention to evaluate whom among its detained population would be at higher risk of contracting the virus.

That evaluation led to more than 900 detainees nationwide being released to await proceedings. The agency’s detained population has dropped by more than 7,000 people since March 1 over last year at this time, the agency’s website noted.

The agency’s website said ICE’s Occupational Safety and Health Unit has worked to improve social distancing and use of personal protective equipment when appropriate, drawing from a pandemic workforce protection plan last updated in May 2017. ICE screens new detainees and isolates those with fever or respiratory problems. Agents also consult with local health departments to assess the need for testing and monitoring, with testing in compliance with CDC guidelines, the agency said.

Janke, the YIRN member, said those statements don’t match with what members have witnessed. Janke said she first observed detainees wearing masks “late in the game” on flights in May and June. Members also noticed inconsistent use of masks and personal protective equipment by agents, who wore the protective gear only when moving detainees to the airplane, Janke said.

While the Federal Aviation Administration governs personal protective equipment being provided to passengers and safety standards, each airline retains some discretion over how to implement the guidance.

iAero Airways, the charter airline encompassing the Swift Air flights, did not respond to comment about their sanitation and social distancing measures prior to publication of this story.