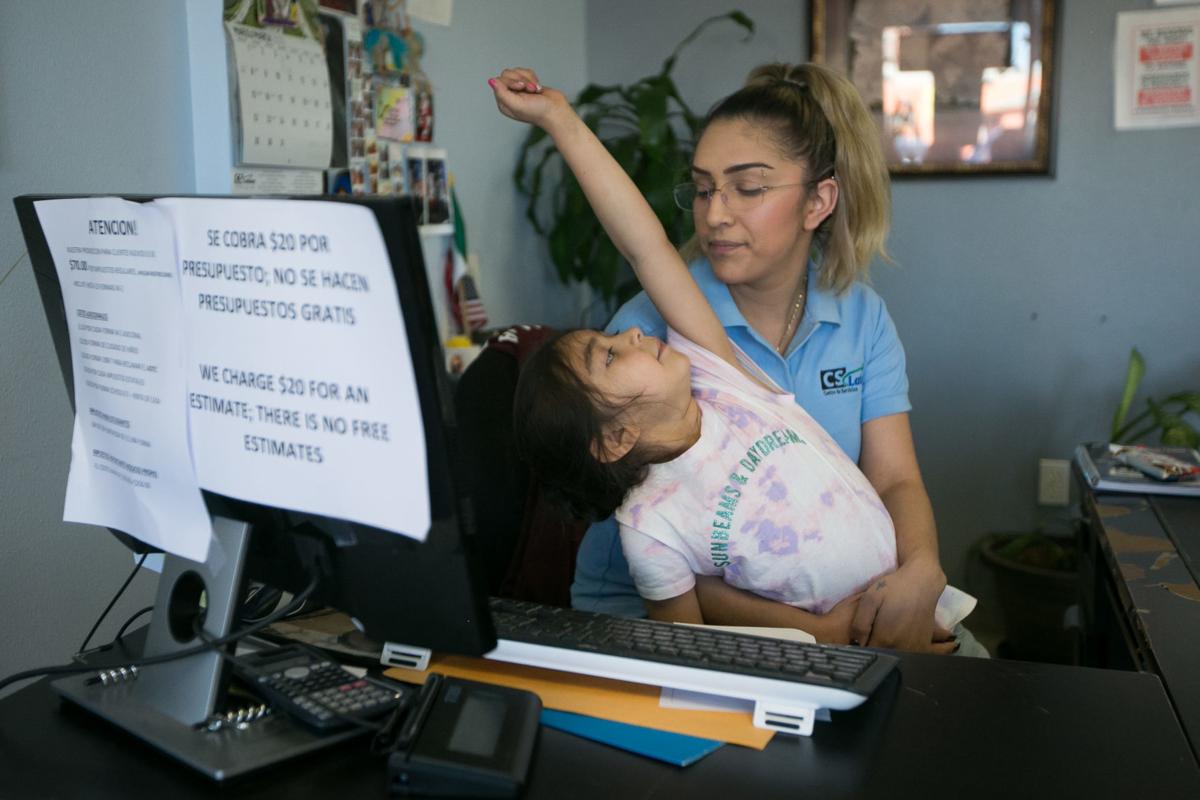 During a work break, Briana Rodríguez, a tax preparer at Centro de Servicios Latinos, right, gives her 6-year-old daughter, Serena Felix Rodríguez, a hug at her desk Monday, March 16, 2020, at Centro de Servicios Latinos, 112 E. Walnut St. in Yakima, Wash. As part of a statewide mandate by Gov. Jay Inslee, all private and public K-12 schools are closed through April 24 to help limit the spread of the new coronavirus and give health care providers more room to respond. 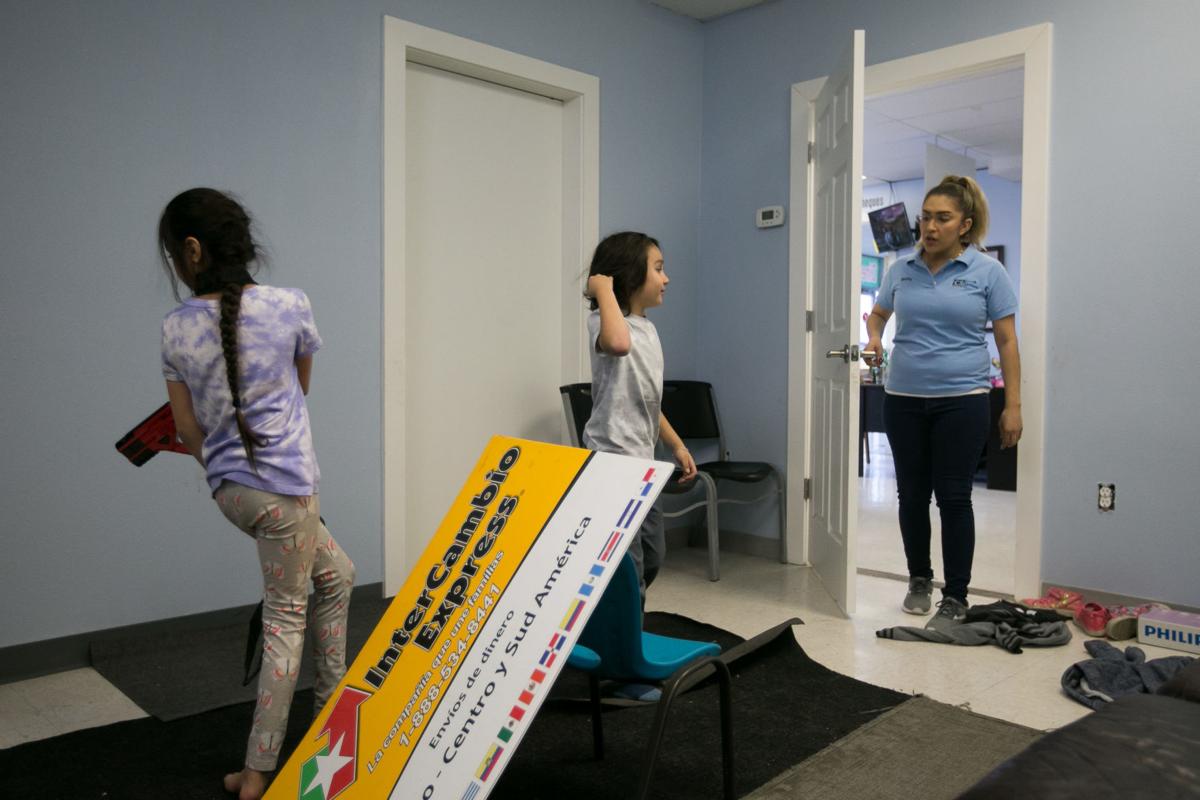 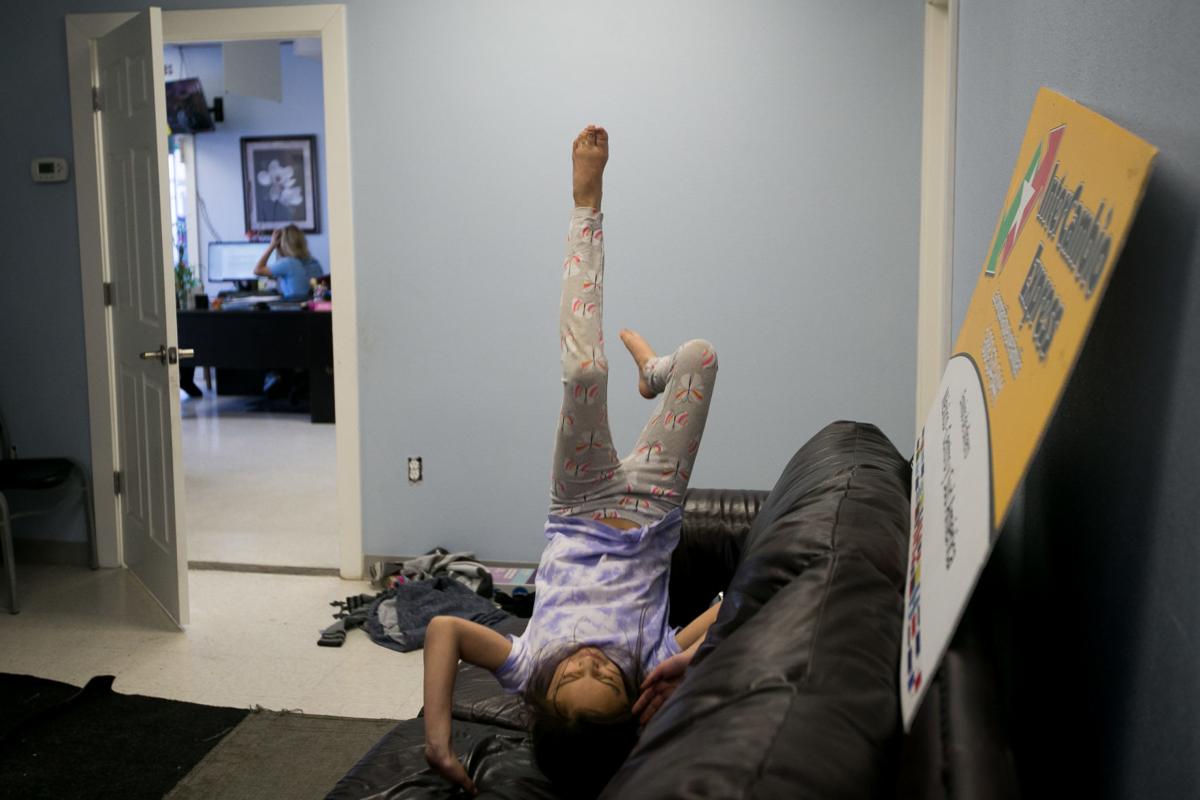 Delilah Rodríguez, 8, attempts to flip on a couch in the back office of Centro de Servicios Latinos Monday, March 16, 2020, in Yakima, Wash.

During a work break, Briana Rodríguez, a tax preparer at Centro de Servicios Latinos, right, gives her 6-year-old daughter, Serena Felix Rodríguez, a hug at her desk Monday, March 16, 2020, at Centro de Servicios Latinos, 112 E. Walnut St. in Yakima, Wash. As part of a statewide mandate by Gov. Jay Inslee, all private and public K-12 schools are closed through April 24 to help limit the spread of the new coronavirus and give health care providers more room to respond.

Delilah Rodríguez, 8, attempts to flip on a couch in the back office of Centro de Servicios Latinos Monday, March 16, 2020, in Yakima, Wash.

With more than 55,000 Yakima County students out of class for a six-week statewide school closure beginning this week, families are working to quickly adjust to the impacts of the coronavirus pandemic.

“It’s been different explaining to my own kids about the circumstances, with the whole state epidemic and national epidemic,” said Rachel Garza, a mother of four who would ordinarily be teaching at Roosevelt Elementary School in Yakima, if school had not been called off for both her and her children.

“It’s been unreal, unbelievable, and I encourage my own children to write about it, draw about it. This is really unheard of,” she said. “You think you’re going to wake up and report back to work, go back to school. You know, it’s just so unreal.”

Gov. Jay Inslee announced Friday that all public and private K-12 schools were required to close through April 24 to help limit the spread of the new coronavirus.

Yakima County schools closed Monday. Statewide, the closures will impact more than 1.1 million public school students, in addition to private school students, those in post-secondary programs — and their families.

For some, that means scrambling to put together educational materials to keep their kids learning during the closure. Some are trying to find child care. And many are trying to help their children process this unprecedented experience.

Because the closures happened so suddenly, not all schools have sent home materials with students to allow them to continue learning during the limbo period.

Even among those that did, many are choosing not to grade the work, since things like individualized learning plans, internet access and computer access make it challenging to equitably provide resources.

But many parents are eager to keep their kids learning, and concerned if they don’t, they’ll fall behind.

Eisenhower High School teacher Donald Duff DeWitt III spent the first day without school at home with his wife and three kids, creating a makeshift elementary school schedule for each of their children so they wouldn’t fall behind.

“Reading, writing, math, PE, recess. We’re definitely not treating this like a break or vacation. We’re treating it like homeschooling for the foreseeable future,” DeWitt said. “With the expectation of social distancing, it’s sort of sinking in with the kids that we’re not having play dates all the time. This is not summer vacation, it’s just a new normal to adjust to.”

Brandy Lansden, the mom of 7-year-old twins who attend McClure Elementary School, is doing everything in her power to maintain the norm her kids are already used to. Her son is in a special education classroom of 11 kids and accustomed to a strict routine. So his teacher emailed her a copy of the class schedule, to help with the transition. It’s helpful, and she is using it to guide both of her kids through the time off. But trying to maintain that for six weeks?

What’s more, Lansden and her husband aren’t working because business at the companies they work for has slowed since the arrival of the virus in Yakima County. The family is already running low on household supplies. But Lansden said she’s grateful for the student meals distributed by local schools to keep kids like hers fed, as well as the fact that kids aren’t considered high-risk for COVID-19.

Instead, she worries about the well-being of people like her 58-year-old husband, since those over 60 are more vulnerable to the illness, as well as individuals who are immunocompromised or pregnant.

“Right now, it’s a little scary,” she said. “It’s just the times, right now. Everybody has to adjust. Everybody just has to know that it’ll be alright and we’ll get through it — hopefully.”

Ed Pacheco, whose daughter Ava attends fifth grade at Discover Lab in Yakima, said he hoped to get more communication from the district about possible materials for continued learning. In the meantime, Pacheco said the family was considering online learning during the closures.

On Wednesday, Yakima School District announced it is preparing to make optional academic resources, materials and guidance available to families by Monday, March 23. Some West Valley teachers were distributing materials to students and parents Wednesday.

Caring for the kids

For many parents, finding someone to care for their children so they can continue working has been a challenge.

But providers are licensed to care for a certain number of children, and Yakima County already has a shortage of open spots. In fact, much of the Valley is already considered a child care desert, meaning the demand far outweighs spots for children.

Providers are seeking an emergency waiver to allow for higher capacity, but that is yet to be approved by the state, Miranda said.

In the meantime, parents are making tough decisions.

Pacheco said he has neighbors who are farm laborers, and their employers expect them to continue working. As a result, he said, their kids are home without child care.

“There are a lot of folks here who work paycheck to paycheck and don’t have the ability to stay home,” he said. “Either you go to work and get paid or you don’t have an income.”

In other cases, businesses are making accommodations.

Briana Rodriguez, a partial business owner of local finance and tax company CS Latinos, is able to bring her two children and niece to her office, where there is a designated room for them to play. She says she’s fortunate, but she worries about other parents who have to choose between taking care of their kids and going to work.

Some parents have resorted to reducing their work hours.

Luz Lind, a mother of two kids at Wide Hollow STEAM Elementary School in West Valley, is one of them. She found out through social media that school was being closed, and she and her husband immediately began texting about how they could alter their work schedules and coordinate with family to ensure their 6- and 8-year-olds were cared for.

Ultimately, Lind had to reduce her work hours in addition to sending the kids to spend time with their grandparents, she said. Now she’s trying to keep her kids occupied by creating learning moments around the house.

“That’s still in the back of my mind. We need to watch what we spend and how we spend,” she said.

Garza, the Yakima mom of four who is an English Language Learner interventionist, expects to get a notification from Yakima School District any day, telling her to come back to work or go to a training, since school employees are expected to remain employed through the closures. But with her husband working as an electrician in Toppenish, he is not expecting to get leave, meaning the couple will have to make child care arrangements for their kids.

At first, Garza said she called family members to see if they could help out. “But then of course that puts my own parents at risk, because they’re over 60,” she said. “They’re my go-to lifeline. A lot of grandparents are like that, as far as trying to help out their grandchildren and children. There is no way around it. So that would be my game plan, which is not a good one.”

“I’m … taking it day by day with the unknown,” said Garza. “I can only imagine other Yakima families’ (struggle).”