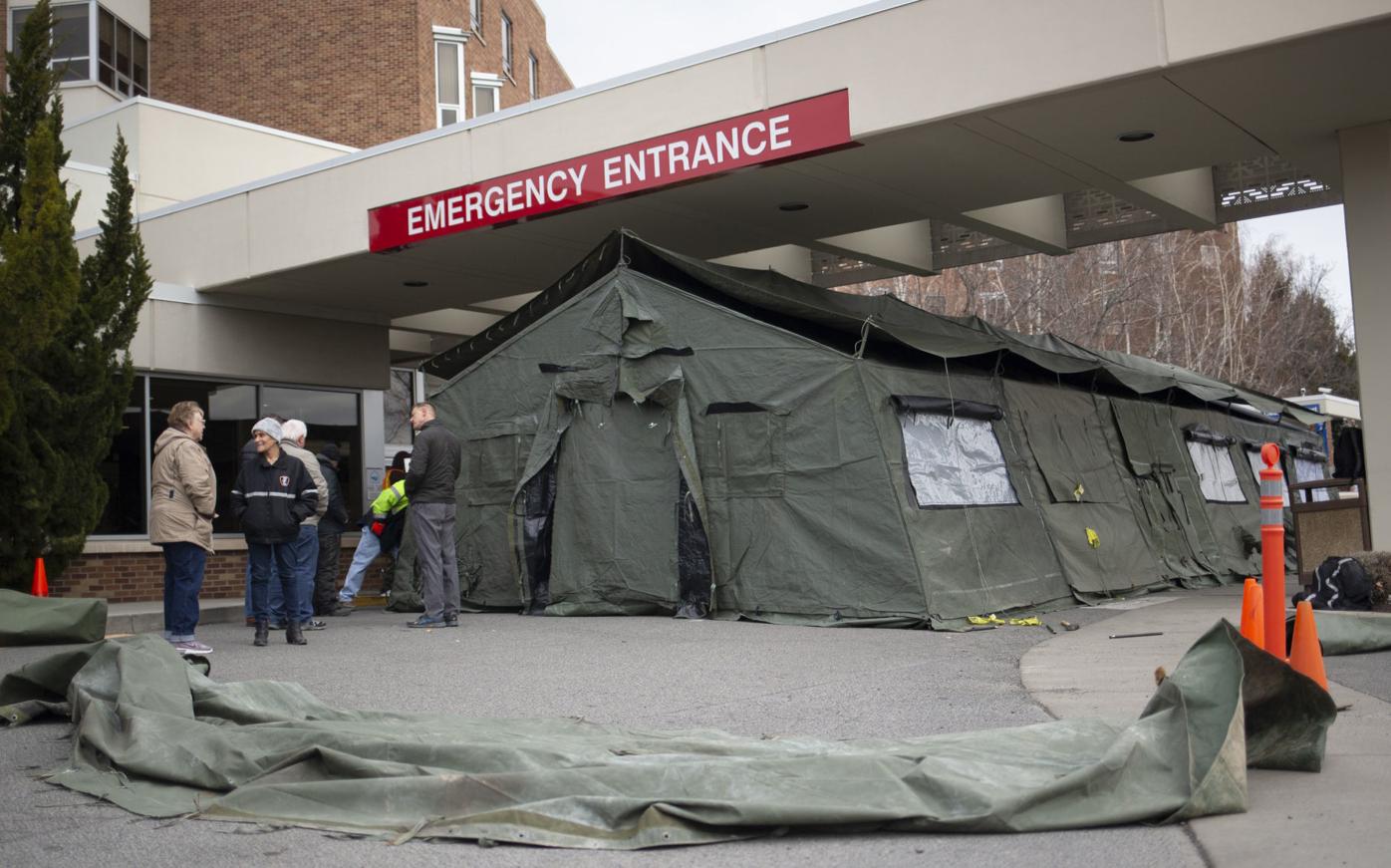 FILE — A tent on loan from Union Gospel Mission is pictured at the emergency entrance of Virginia Mason Memorial on Sunday, March 15, 2020, in Yakima, Wash. The tent will be used for triage and screening. 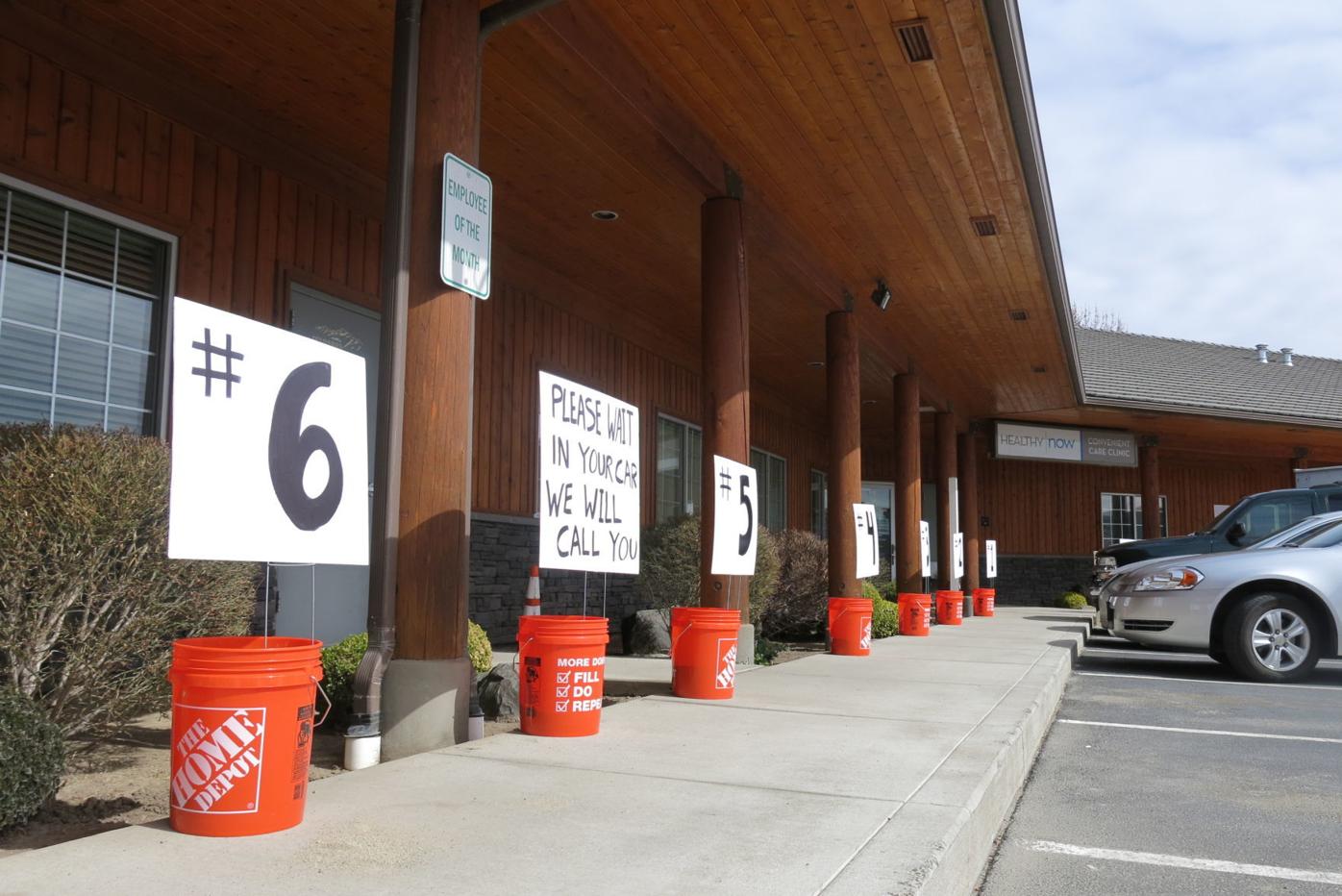 Numbered parking spots in front of the Creekside HealthyNow clinic in March. 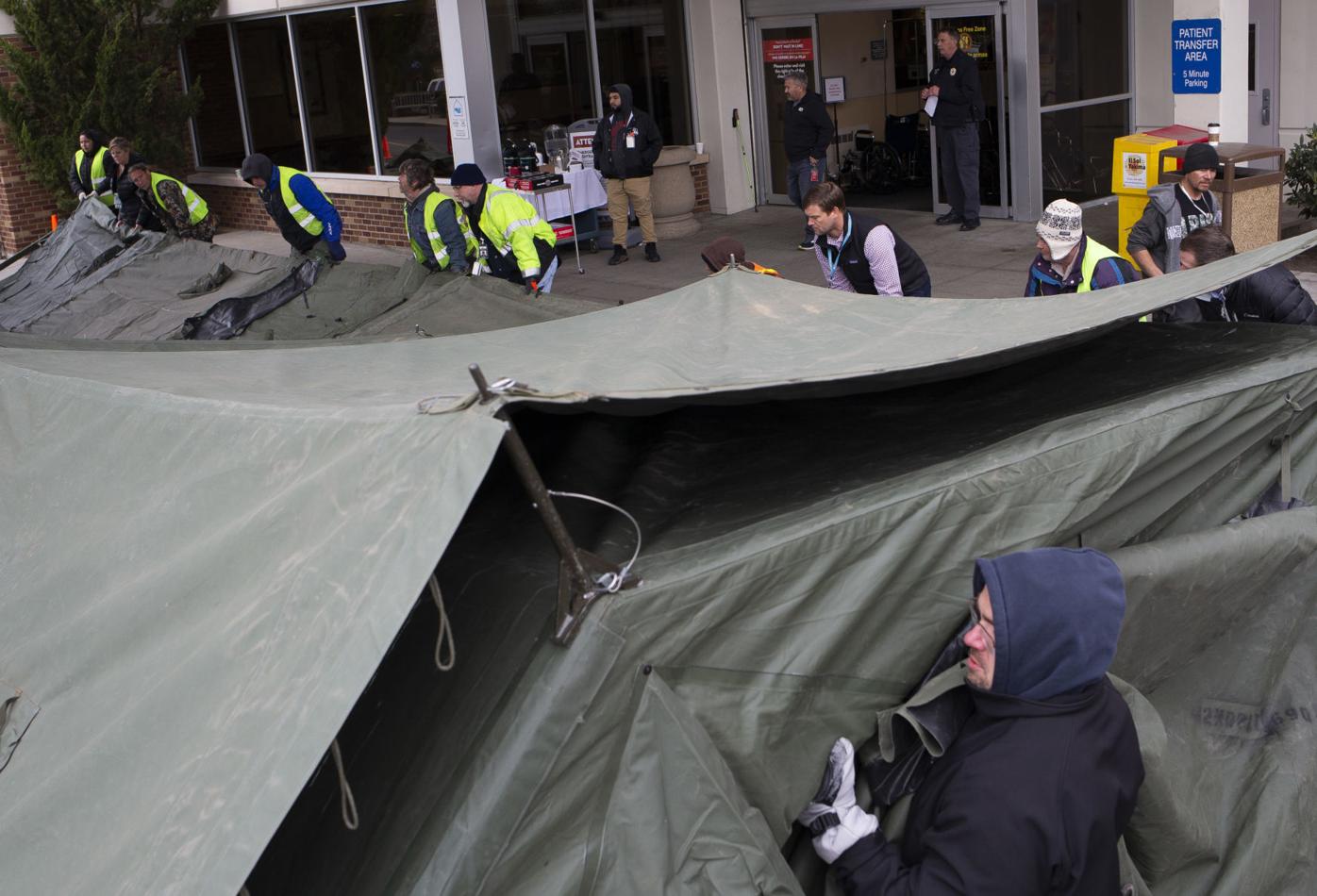 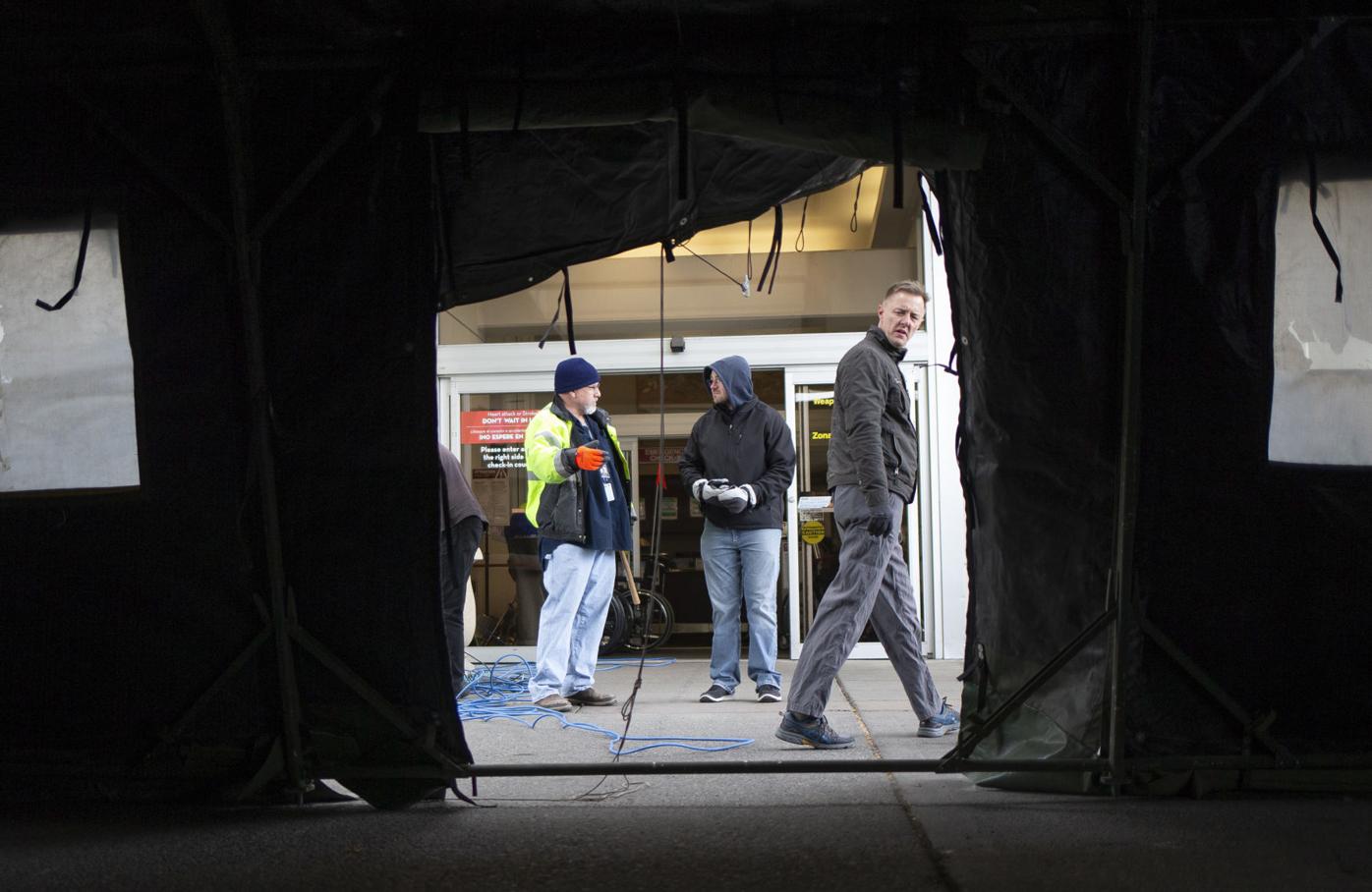 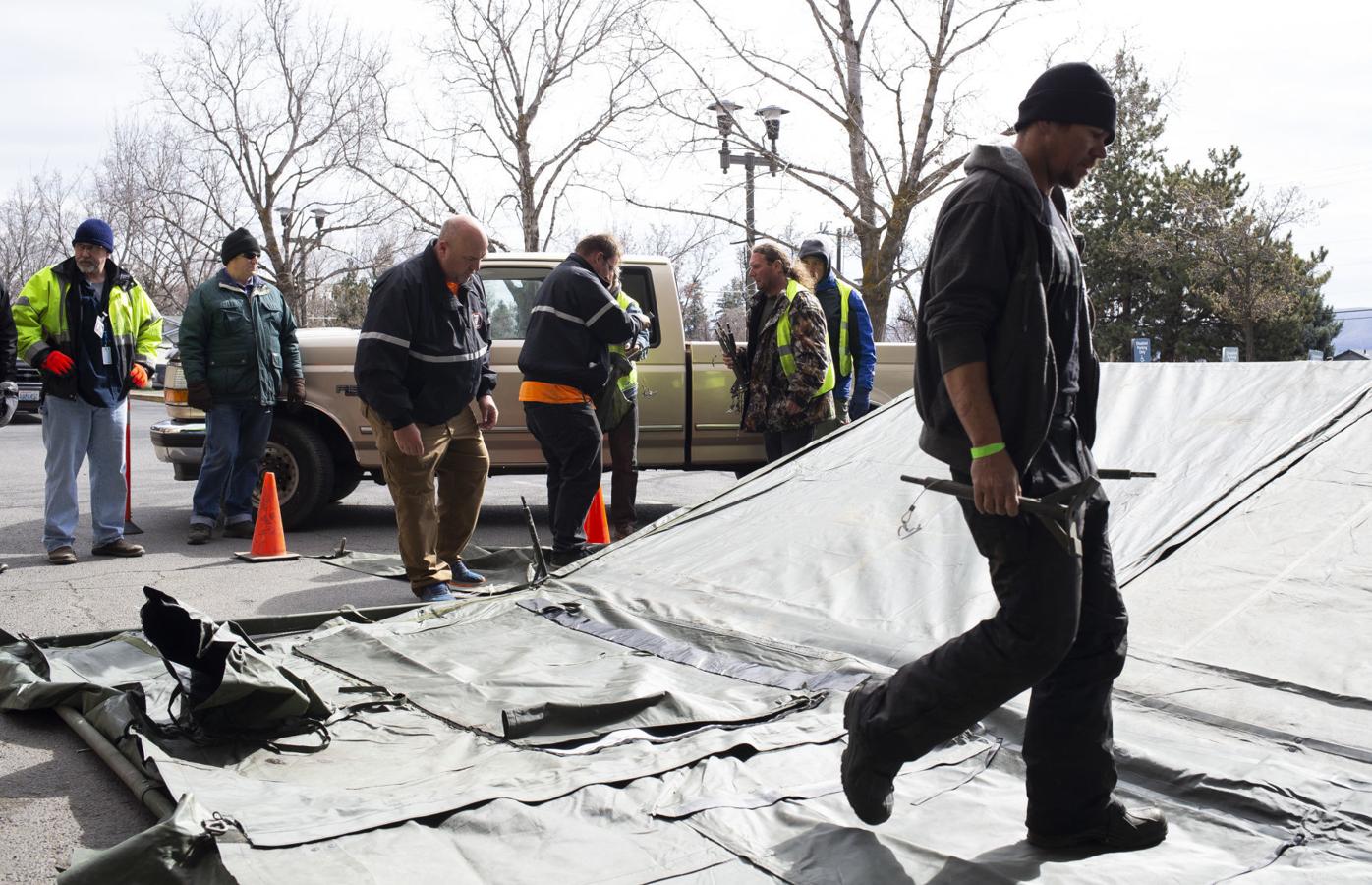 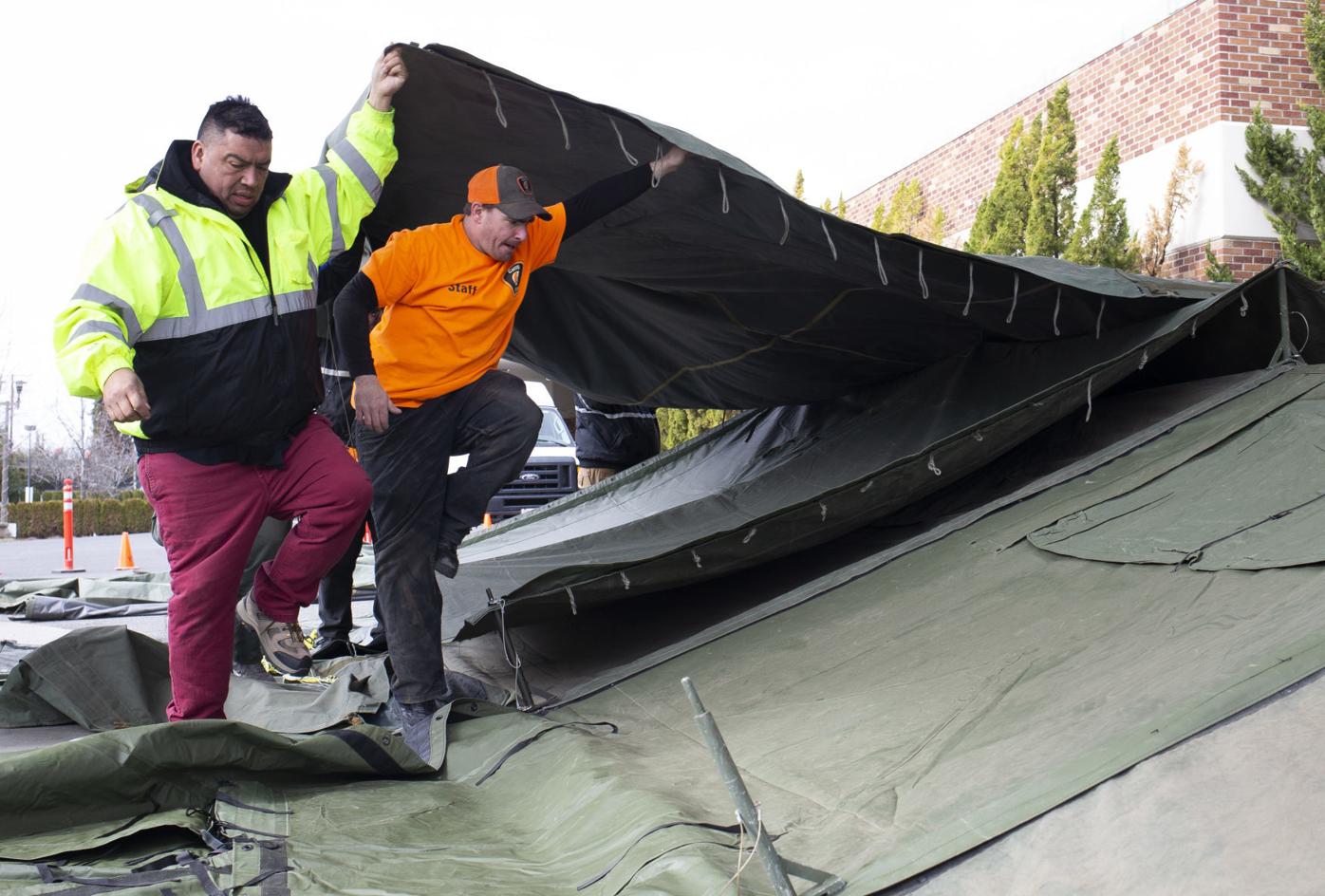 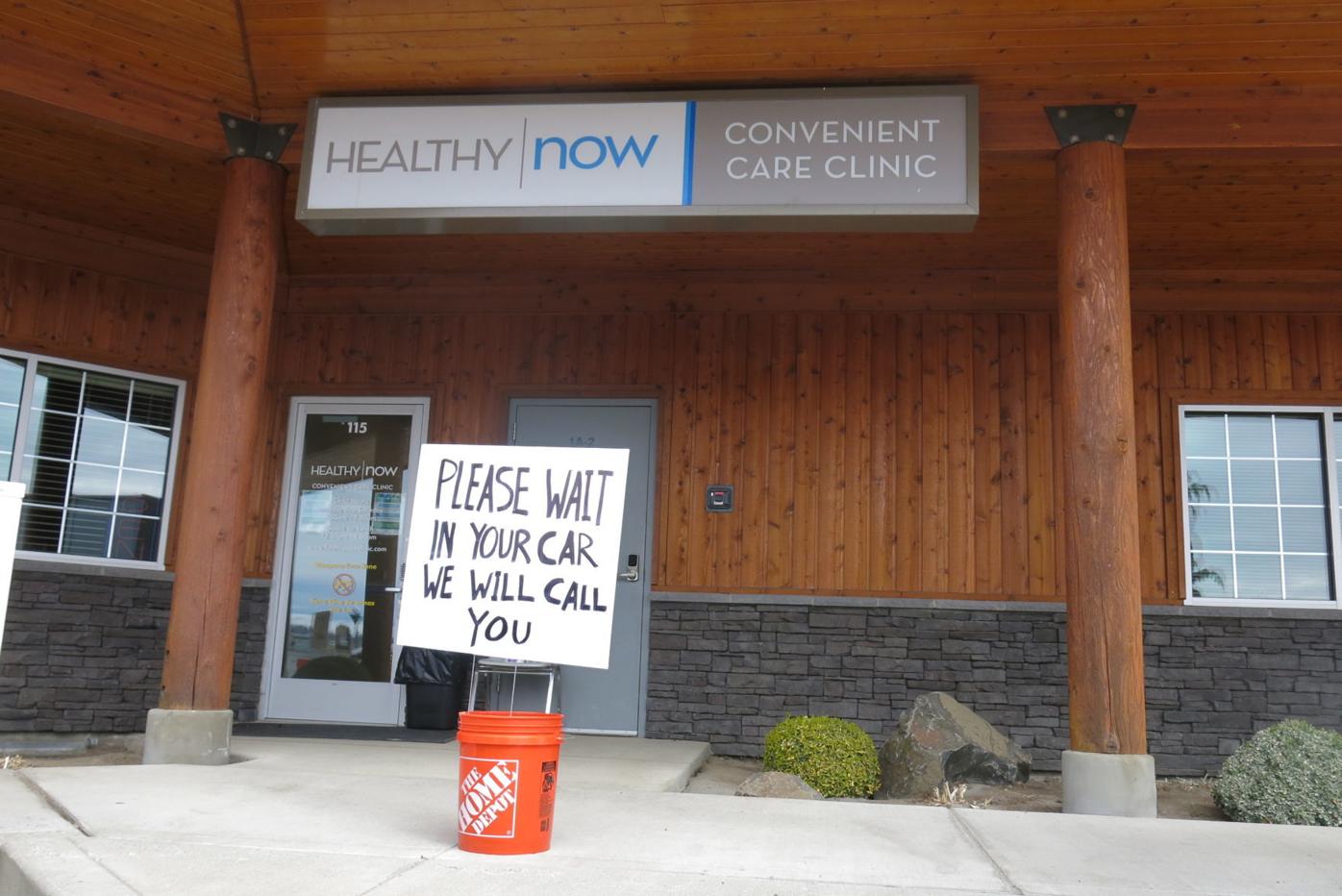 Coronavirus patients at the Creekside HealthyNow clinic are asked to call or text the clinic when they arrive. A provider will then come to the car to triage the patient.

FILE — A tent on loan from Union Gospel Mission is pictured at the emergency entrance of Virginia Mason Memorial on Sunday, March 15, 2020, in Yakima, Wash. The tent will be used for triage and screening.

Numbered parking spots in front of the Creekside HealthyNow clinic in March.

Coronavirus patients at the Creekside HealthyNow clinic are asked to call or text the clinic when they arrive. A provider will then come to the car to triage the patient.

Virginia Mason Memorial launched COVID-19 screening at its Creekside HealthyNow clinic and erected a tent in front of its emergency department Sunday in anticipation of a surge in patients.

Both efforts come about a week after the arrival of the respiratory virus in Yakima County, where there were three confirmed cases and one presumptive positive as of Saturday, according to the Yakima Health District.

While in-patient care at the hospital has been high in recent months due to flu season and the closure of Astria Regional Medical Center, Yakima’s only other hospital, Memorial is anticipating an additional swell in patients from the virus, said Tanny Davenport, a Yakima family physician and chief medical officer of SignalHealth at Virginia Mason.

The hospital, which has 226 licensed beds, has served 180 to 200 patients at a time in recent months, Davenport said. The evaluation clinic and expanded tent services should provide a buffer as the city braces for more cases of the respiratory virus, he said.

COVID-19 is caused by a virus named SARS-CoV-2, which is part of the same family as the flu and common cold. Primary symptoms include fever, cough and shortness of breath. These usually appear two to 14 days after exposure.

Most people experience only mild symptoms. But some people develop more severe symptoms such as pneumonia, which can be fatal. This is most common in those who are older than 60 and individuals who are pregnant or have preexisting conditions.

Community members with potential coronavirus symptoms — such as cough, fever and shortness of breath — can view the wait time for the evaluation clinic online at healthynowclinic.com. Patients are encouraged to call the clinic at 509-225-4669 to be triaged by phone before being placed in the client queue.

At the clinic, 3909 Creekside Loop, Suite 115, in Yakima, patients pull into numbered parking spots and text or call the clinic to say they have arrived. A provider then meets them at their car and provides car-side triaging.

If deemed necessary, patients are escorted inside the clinic for further treatment.

Davenport emphasized that the clinic was for evaluations, meaning that not everyone seen would be tested for the respiratory virus — a decision based on resources and guidance from the Centers for Disease Control and Prevention. Ideally, he said, most patients would be able to be evaluated entirely from their car.

“A large majority aren’t going to be tested for COVID-19, because we do have a limited number of testing supplies and we’re saving it for those who are severely ill or (to test) health care professionals,” he said. “We know that’s probably the resource we’re most worried about: having a workforce to take care of hospitalized patients should that surge occur.”

Davenport declined to say how many tests the hospital had available.

Two providers are staffing the clinic. That is expected to grow once the clinic moves to a larger-capacity location, likely by the end of the week, Davenport said.

The hospital also erected a tent in front of its emergency department Sunday for triage and screening.

“The tent is one of the proactive measures we can do to move some of the triage functions outside of the hospital and limit movement (of patients), which we hope limits risk of infection,” Davenport said.

On Saturday, the hospital, which partners with the mission to provide medical care at its clinic, asked if it could use the tent.

“When they said they needed our help, we said absolutely. It’s kind of fun to be able to help them back,” Johnson said.

Johnson said military tents like the one it loaned to Memorial are in high demand at the moment, with wait times for delivery of up to eight weeks. By loaning the tent to the hospital, he said it saved Memorial time and money.

On Sunday morning, eight Union Gospel Mission staff set up the tent with the help of 24 volunteers from Camp Hope and four hospital staff members.

Johnson said the collaborative effort in preparation for a potential spike in virus cases showed that “if anyone is set up to get through all of this well,” it’s Yakima.

“We’ve got a strong community, strong core institutions and strong partnerships,” he said.

Next steps will be the installation of lights and heat in the tent.

Memorial has also designated specific providers at each of its primary care clinics to care for suspected COVID-19 patients, Davenport said.

He emphasized that most people who have COVID-19 do not need medical treatment.

There is no treatment for the virus itself.

“The best thing people can do is practice good hand hygiene, (and) if you are sick, stay home until your symptoms are resolved for 72 hours,” Davenport said. “Remember that even though your symptoms may be mild, we’re really worried about those who are at risk for severe infection, including the elderly and people with prior medical conditions.”

More information is available at the Yakima Health District website at https://www.yakimacounty.us/2323/Human-Coronavirus.

YAKIMA, Wash. — As hand sanitizer, masks and gloves are becoming more difficult to acquire for the escalating battle against the novel coronav…