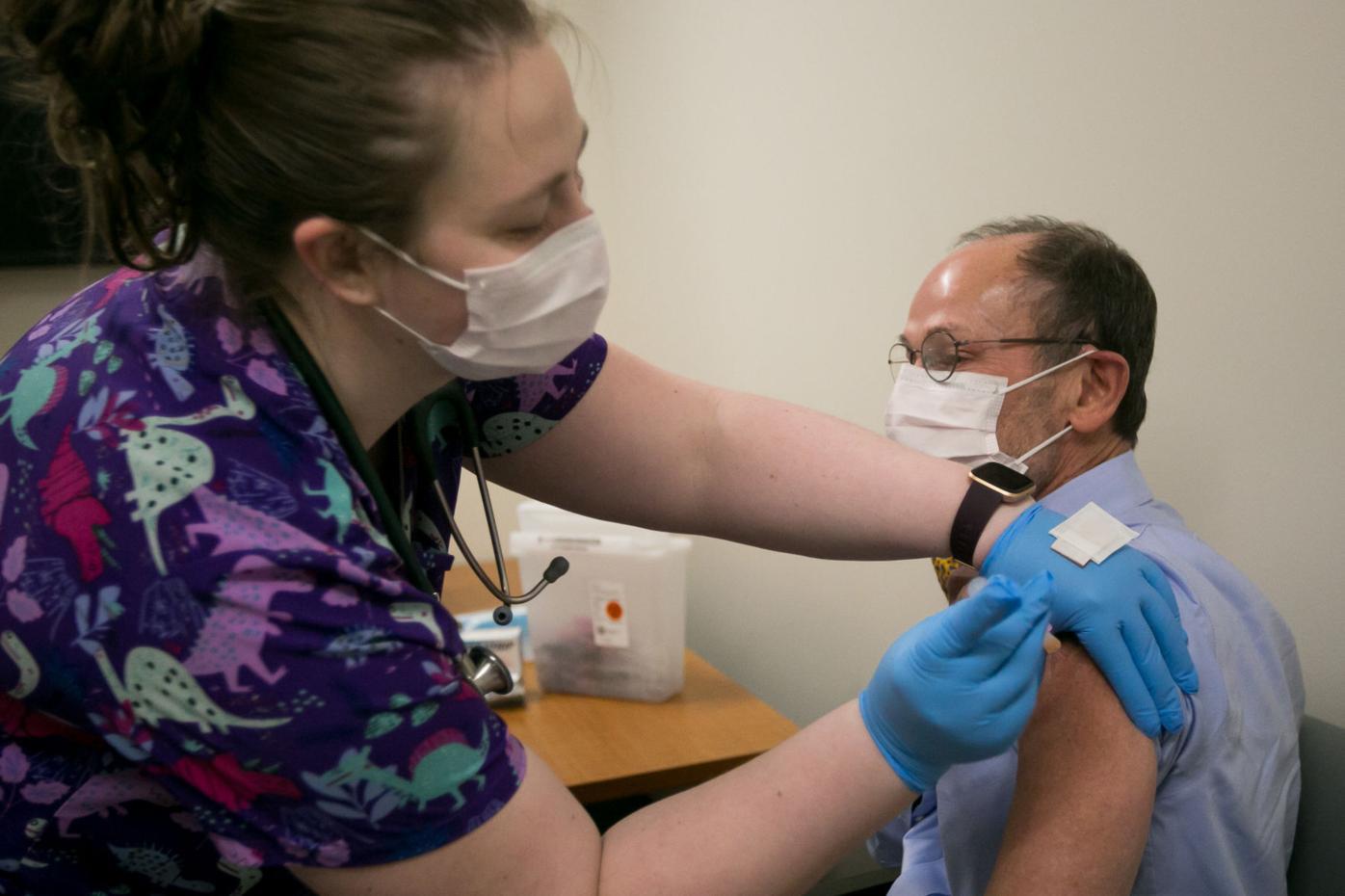 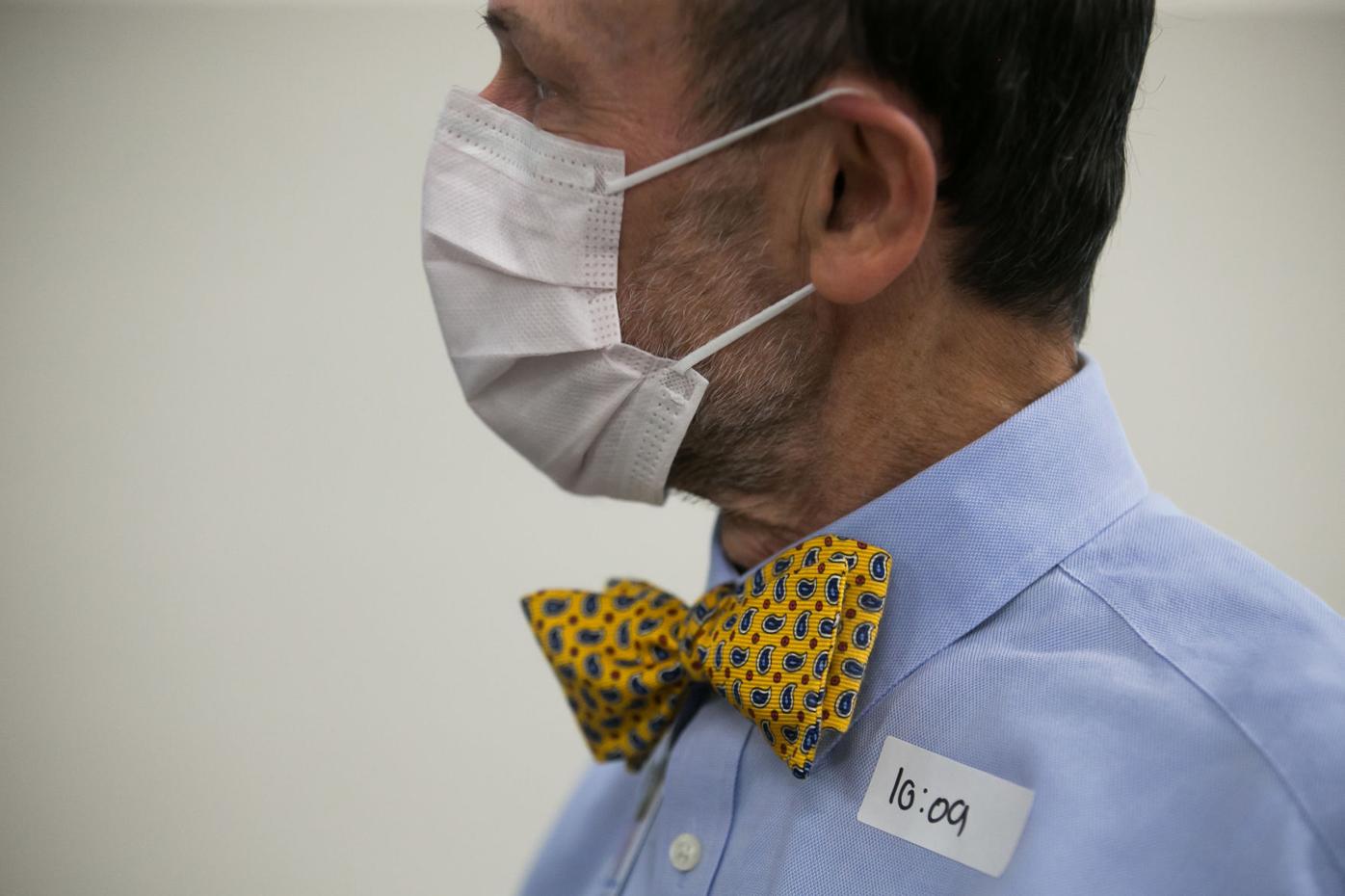 Dr. Roy Simms sports a time stamp sticker near his shirt collar of when he received a dose of the Moderna COVID-19 vaccine Saturday, Jan. 2, 2021, at a Community Health of Central Washington clinic in Ellensburg, Wash. 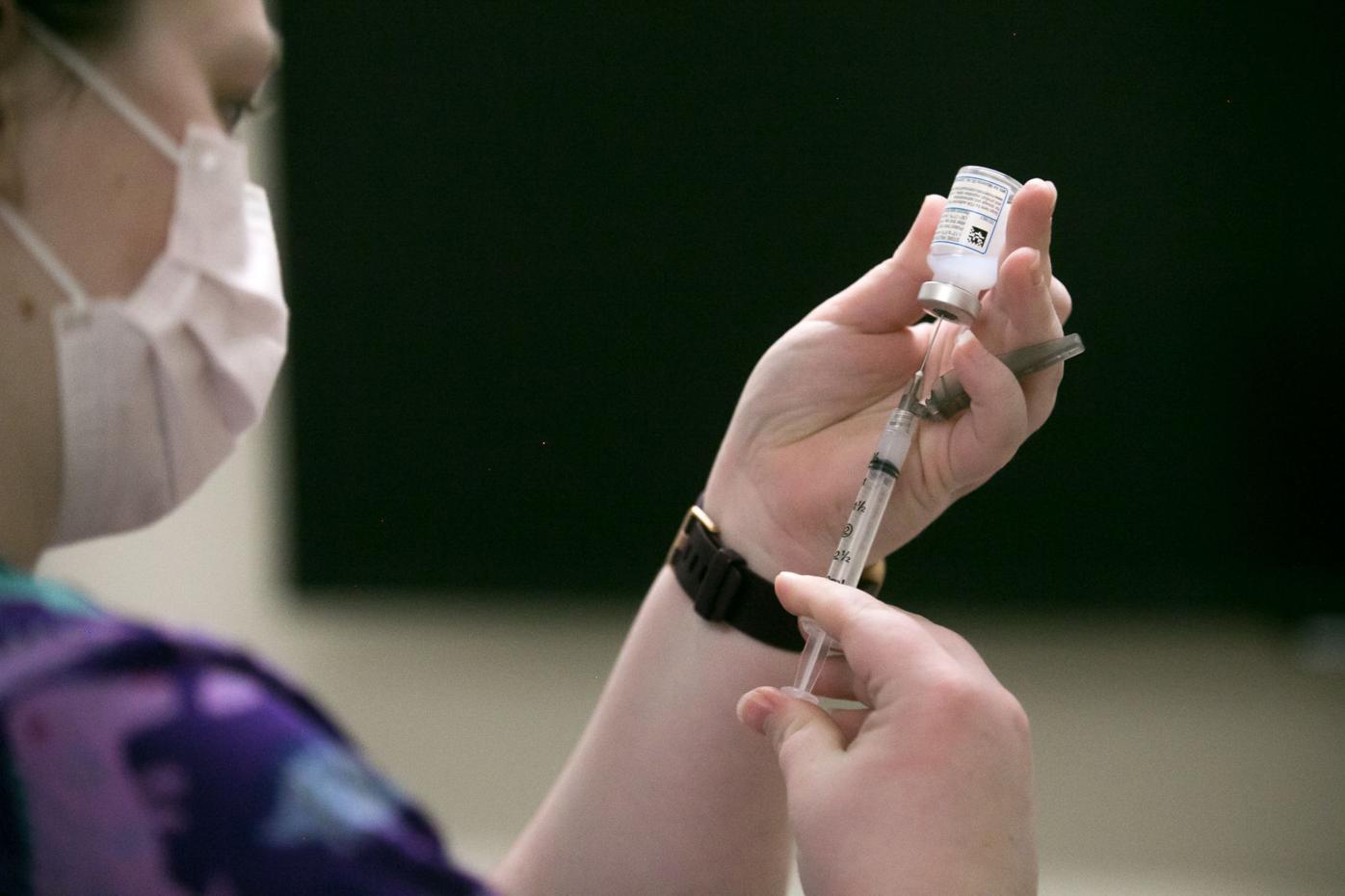 Medical assistant Amber Funderburgh places a dose of the Moderna COVID-19 vaccine into a syringe Saturday, Jan. 2, 2021, at a Community Health of Central Washington clinic in Ellensburg, Wash. 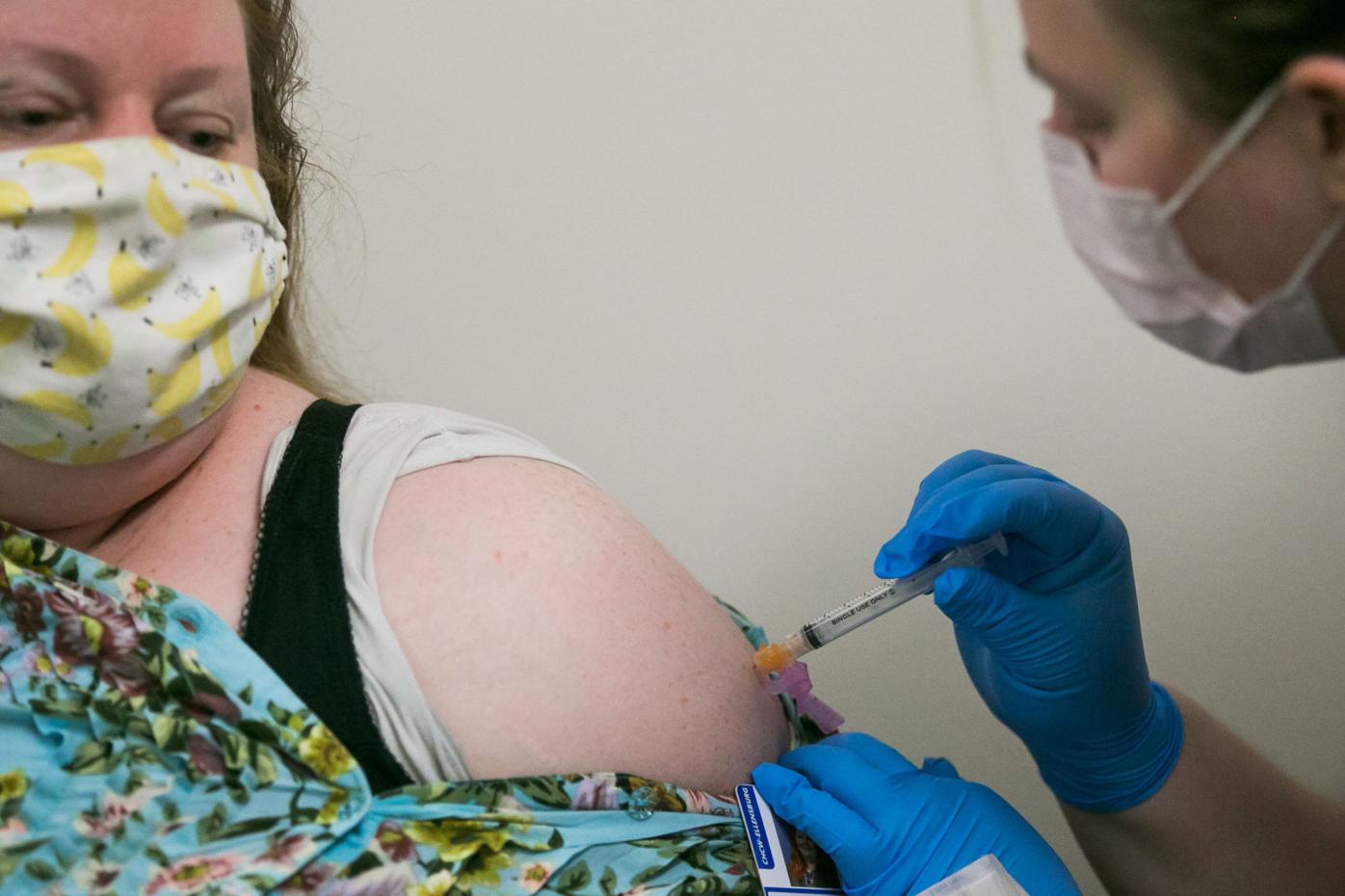 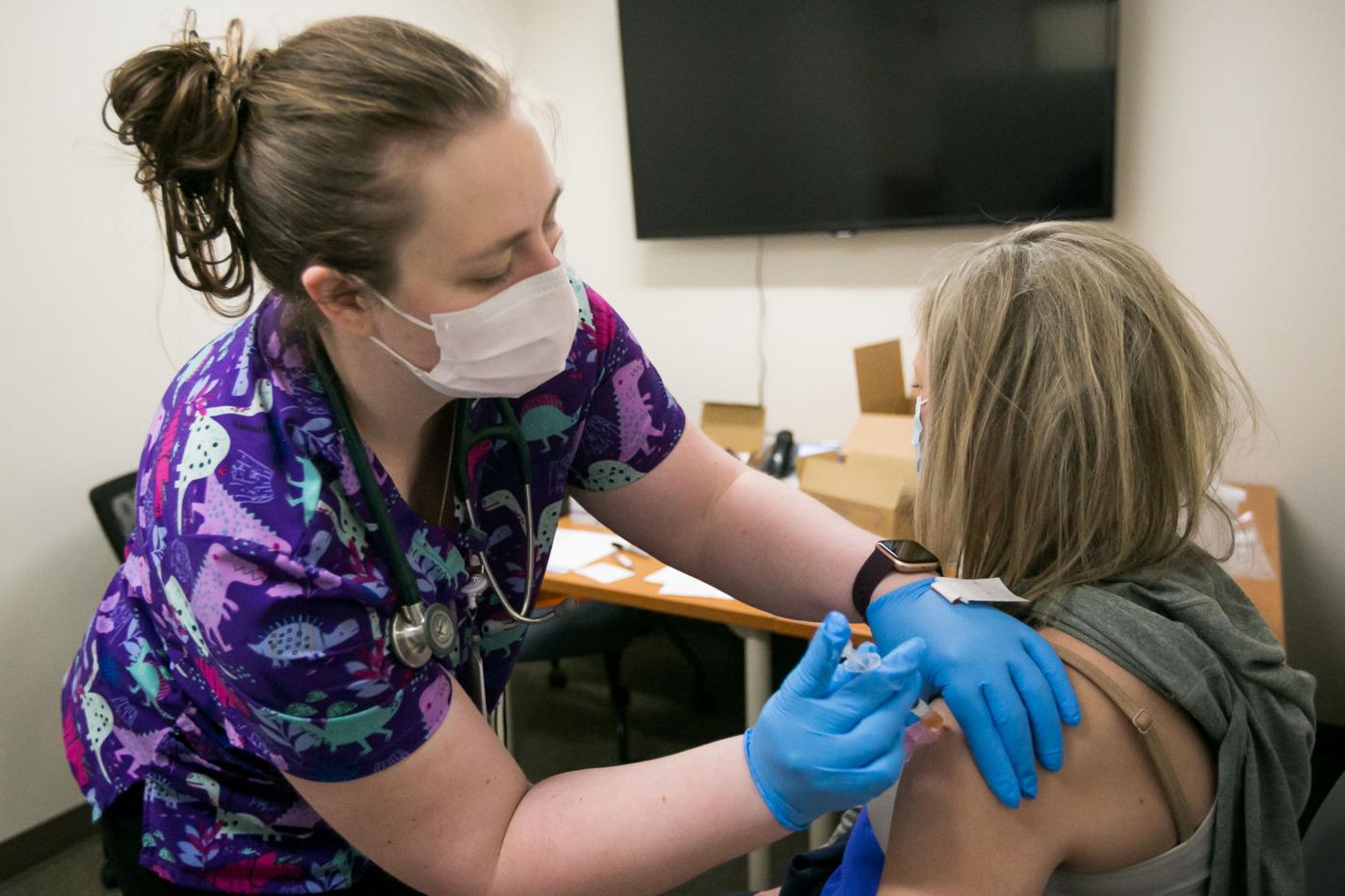 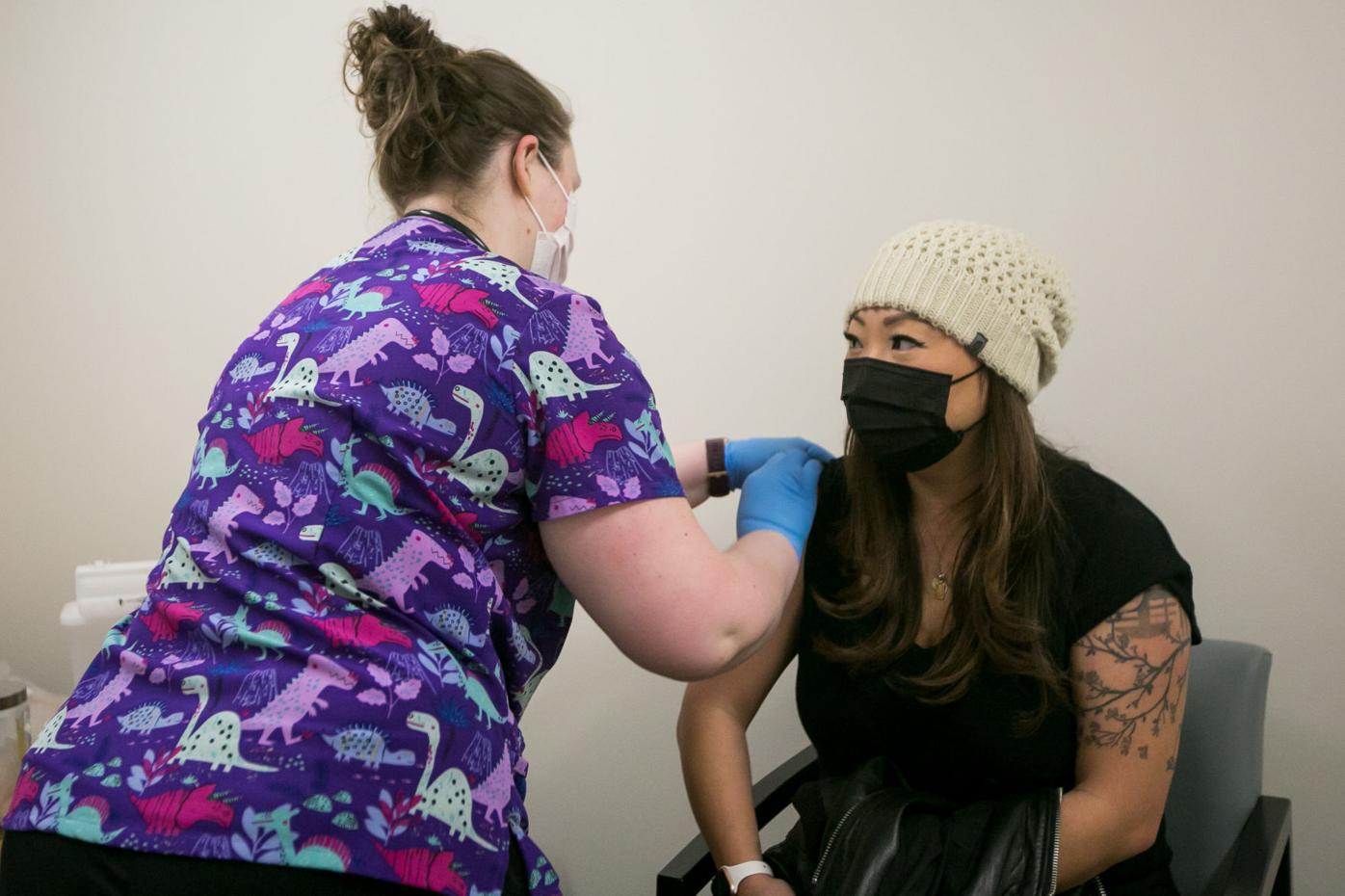 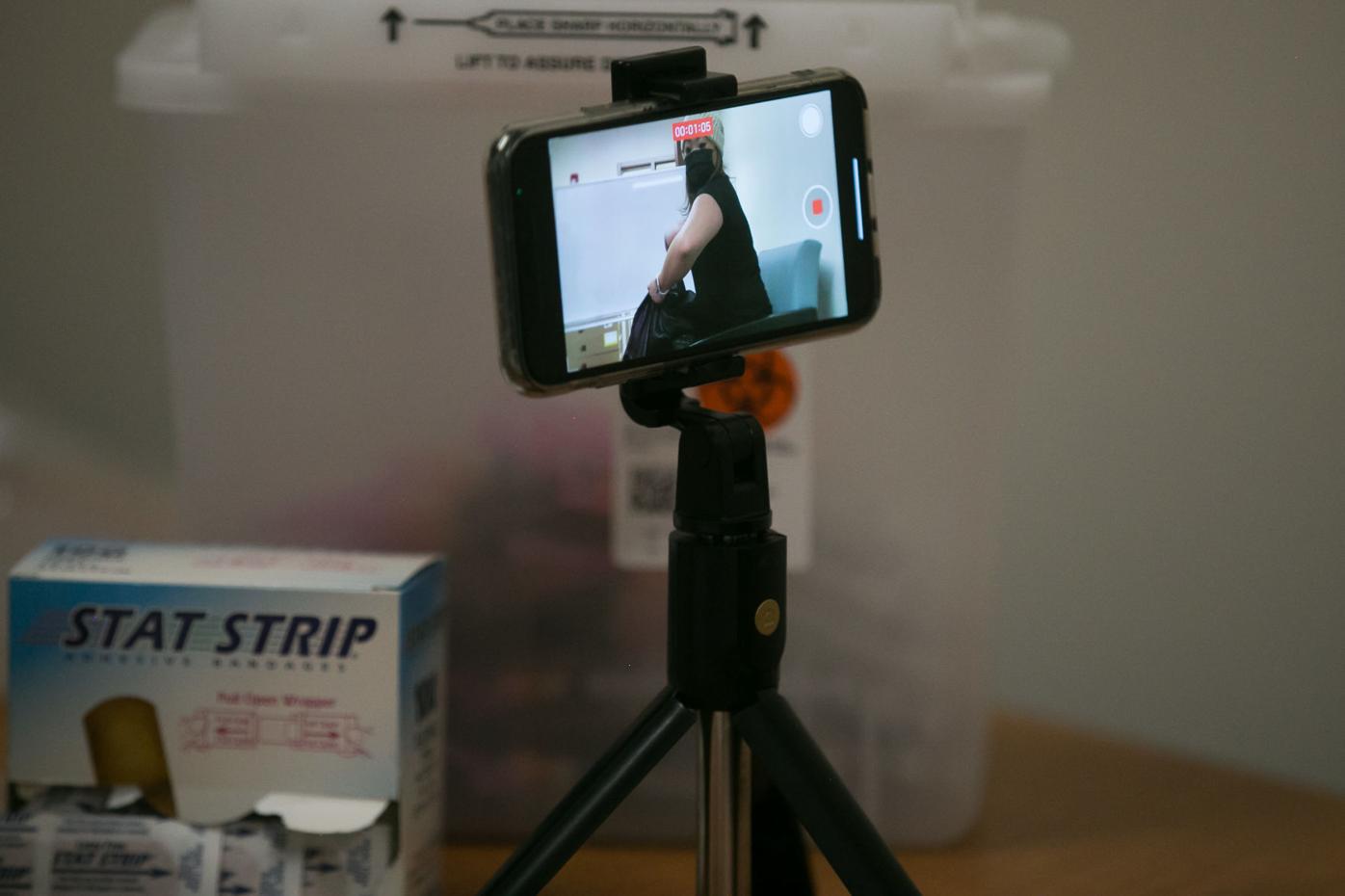 Nicole Miles, clinic manager with Community Health of Central Washington, documents her experience receiving a dose of the Moderna COVID-19 vaccine Saturday, Jan. 2, 2021, at a clinic in Ellensburg, Wash. 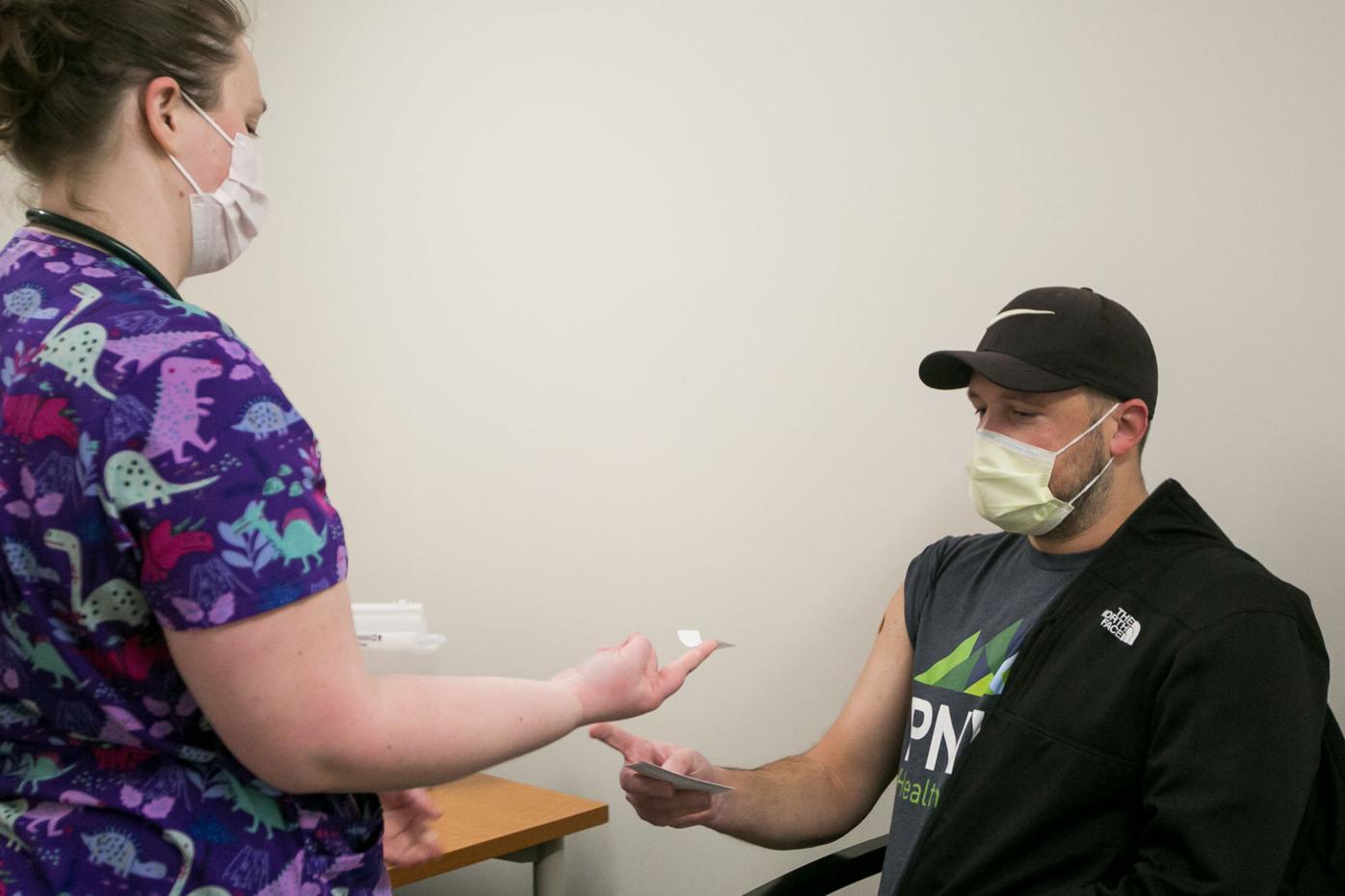 Dr. Roy Simms sports a time stamp sticker near his shirt collar of when he received a dose of the Moderna COVID-19 vaccine Saturday, Jan. 2, 2021, at a Community Health of Central Washington clinic in Ellensburg, Wash.

Medical assistant Amber Funderburgh places a dose of the Moderna COVID-19 vaccine into a syringe Saturday, Jan. 2, 2021, at a Community Health of Central Washington clinic in Ellensburg, Wash.

Nicole Miles, clinic manager with Community Health of Central Washington, documents her experience receiving a dose of the Moderna COVID-19 vaccine Saturday, Jan. 2, 2021, at a clinic in Ellensburg, Wash.

Roy Simms has been a pediatric doctor in Yakima County for roughly 40 years. During his career, he estimates he’s walked into a clinic room over 100,000 times to meet with families and address their medical needs.

On Saturday morning, Simms, who works at Yakima Pediatrics, was among the earliest group of Washingtonians to get vaccinated against COVID-19 — something he says is safe and good to do.

Simms said getting the vaccine was relatively painless. It was similar to getting a flu shot, he said.

He received the Moderna vaccine, one of two newly developed COVID-19 vaccines approved by the U.S. Food and Drug Administration for emergency use. The Moderna vaccine is approved for use in individuals 18 and older. It’s a two-part vaccine. The second dose is administered 28 days after the first.

Simms said getting the first dose of the Moderna vaccine at a sister clinic in Ellensburg was quick, although he was asked to stay for a short time afterward for observation.

Clinical trial data shows it is 94% effective following both doses, according to the state Department of Health. No serious safety concerns were found in the trials. The first shipment of the vaccine arrived in the state in late December.

The Pfizer-BioNTech COVID-19 vaccine, which arrived in the state a week prior, is 95% effective within two weeks after two doses according to trials, similarly has no serious safety concerns and is available for individuals 16 and older.

Simms said the efficacy of the vaccines is remarkable.

“It’s more (efficient) than we could have hoped for,” he said. “It’s a huge benefit for those who get it.”

That’s especially true since the long-term impact of having the virus is yet to be seen, he said.

Researchers are still studying whether the vaccines prevent transmission of the virus, Simms said, but he looks forward to seeing what the science reveals.

In the meantime, he said, he hopes to see vaccine distribution expand enough that individuals don’t have to travel far to get the treatment. For him, he said a drive to Ellensburg was no issue. But others don’t have the time or transportation to take the trip.

“We really have to pay attention to every person who is most vulnerable and try to get them the vaccine in the most efficient way,” he said

The need for vaccines

For people who think they don’t need a vaccine, Simms says everyone’s biology is the same. He said this is like saying you don’t need to wear a seat belt just because you’ve been in a car when there has been no accident.

He’s also been a doctor long enough to have seen infectious diseases that were once dangerous but aren’t seen anymore in patients thanks to mass immunization. He pointed to Haemophilus influenzae, a bacteria that mostly impacted babies, causing brain infection. At one point in his career, he said, he saw about one patient a week suffering from it. Its impact ranged from deafness to permanent disability or death, he said.

“A horrible infection,” he said. “We don’t see that disease at all anymore. It’s gone. There’s no one in the hospital with H flu meningitis. It’s because of the vaccine that we give every baby.”

Is the COVID-19 vaccine safe?

While their approval was fast-tracked, he said corners weren’t cut in the vetting process. The number of people included in the trial studies is “very similar to other vaccines that have been rolled out in the past 20 years or so,” and the format of the studies and things monitored were the same as with any other vaccine.

As with any vaccine or medication prescribed, there is the possibility of allergic reactions, he said. But he said there have been few patients that have experienced things like anaphylactic reactions, and these reactions are treatable. In the case that someone has a history of severe allergies, the recommendation is that they be monitored for a short period after receiving each dose.

“The kinds of reactions we are talking about are immediate … for which we have treatment,” Simms said. “Watching someone for a short period of time after the vaccine (dose) will allow us to see those and treat those.”

These reactions are extremely rare, he added.

Simms said there are a lot of people in the U.S. who are concerned about vaccines, so as a pediatrician who administers vaccines for things like measles, he’s accustomed to having conversations about their impact.

“What we try to do is to engage the family in a way that reflects our shared concern about the child: They’re there because they’re concerned about their child’s health and wellness and well-being. I’m there for the very same reason,” he said.

He said getting vaccines is a wise and helpful way to keep children healthy and to avoid infections. They also protect the broader community by building up herd immunization, lessening the possibility of an outbreak.

“Every single person I give a measles vaccine to protects other people from getting that disease,” Simms said. “We live in a society where individual freedom is so precious to us, but we sometimes don’t think about our actions in terms of other people’s freedom: You have the right to refuse a vaccine, but as a human being, you have a right to be healthy. There’s always a balance … but we live in a community. We live in a place where all of us interact and care for one another and help one another, whatever it is. So we have to think about how our decisions impact other people.”

He said the COVID-19 vaccines are no different: Anyone who can should be getting immunized against COVID-19.

When people choose not to get vaccines, he said he always makes sure that they know his door is open.

“I invite them at the end of every visit, ‘If you change your mind, come back and we will do it. There’s no shame, I won’t guilt you, and the next time, we’re going to have the same conversation,’” he said.

Simms said while the vaccine is not yet approved for children, research is underway. When it’s approved, he said he would recommend that children get vaccinated, too.

While children aren’t the population most likely to die from COVID-19, he said there’s also little known about the long-term impact the virus could have on children.

“So I wouldn’t recommend people be cavalier about children,” he said of those that get the virus. “We just don’t know. So I’m concerned, and I think it would be wise to get immunized.”

He said women who are pregnant should consult with their health care provider to determine the pros and cons of getting vaccinated and to make their decision based on advice from their provider.

Meanwhile, he said, those who can get vaccinated should.