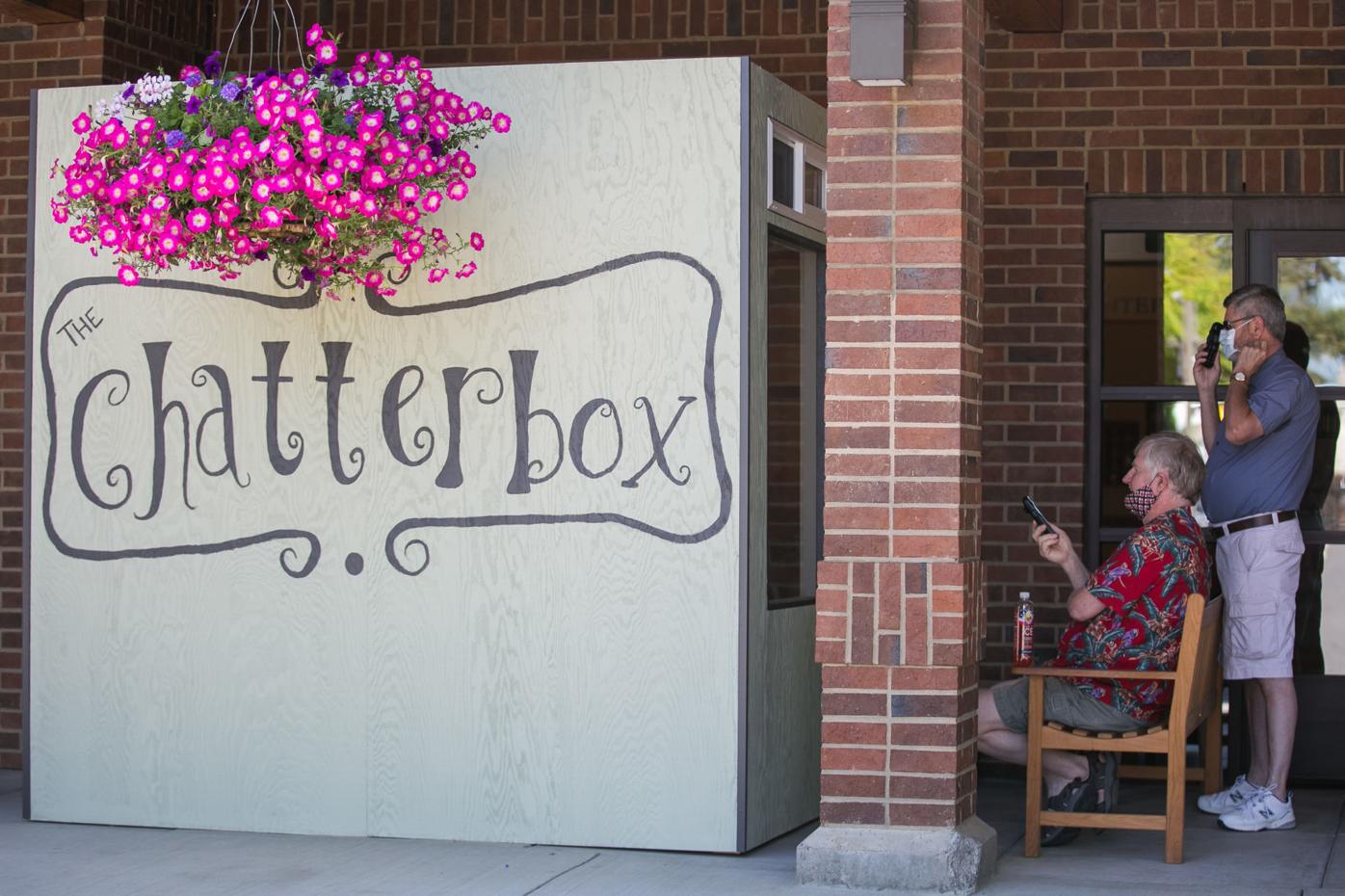 Robert, left, and Richard Lounsbury sit in front of the Chatter Box as they visit with their mother Virginia Hathaway, 92, Friday, June 26, 2020, at Living Care Retirement Community in Yakima, Wash. The Chatter Box is a new effort to help residents safely see their families during the COVID-19 pandemic. 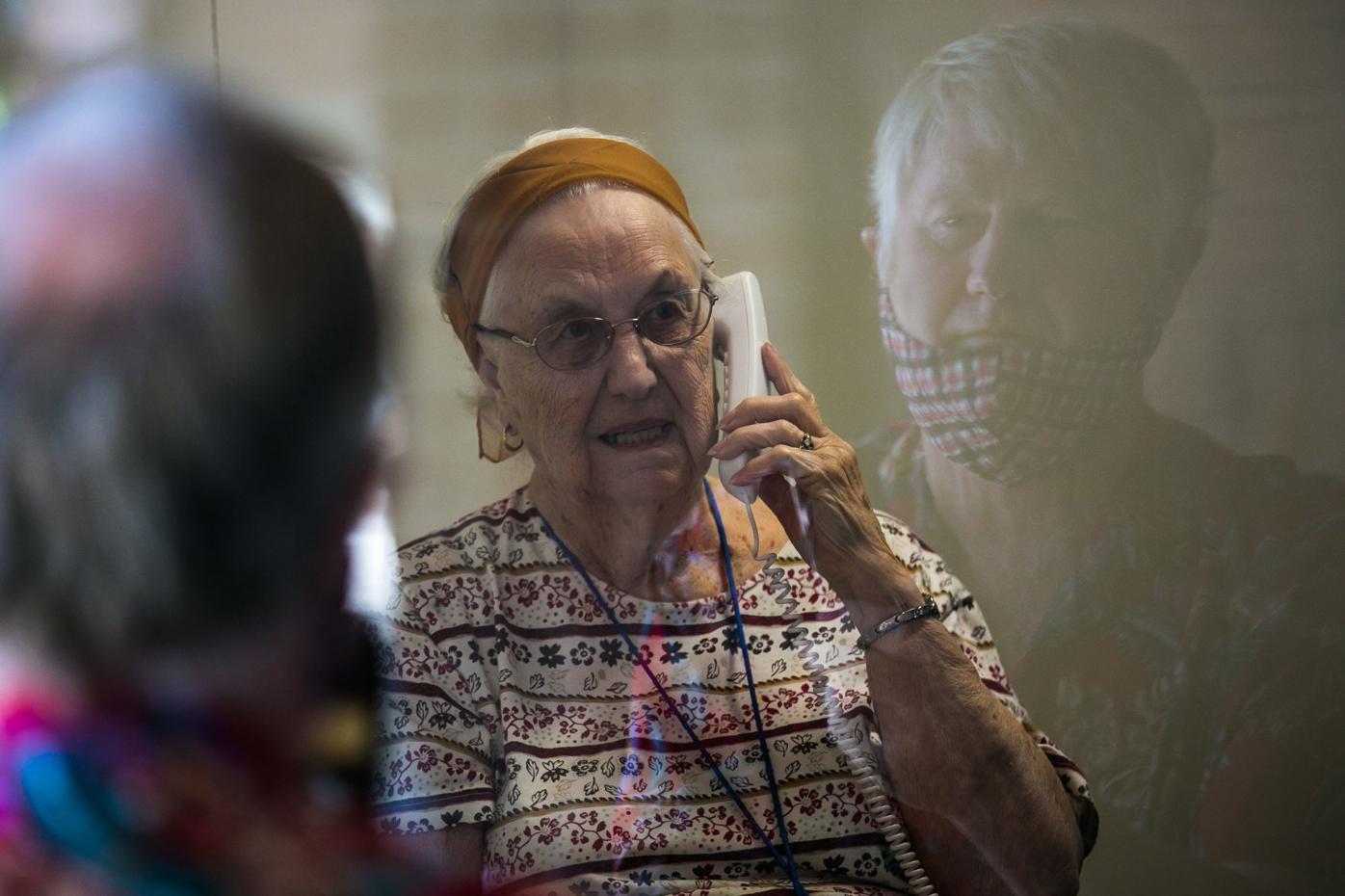 Virginia Hathaway, 92, speaks through the Chatter Box telephone as she visits with four members of her family Friday, June 26, 2020, at Living Care Retirement Community in Yakima, Wash. The Chatter Box is a new effort to help residents safely see their families during the COVID-19 pandemic. 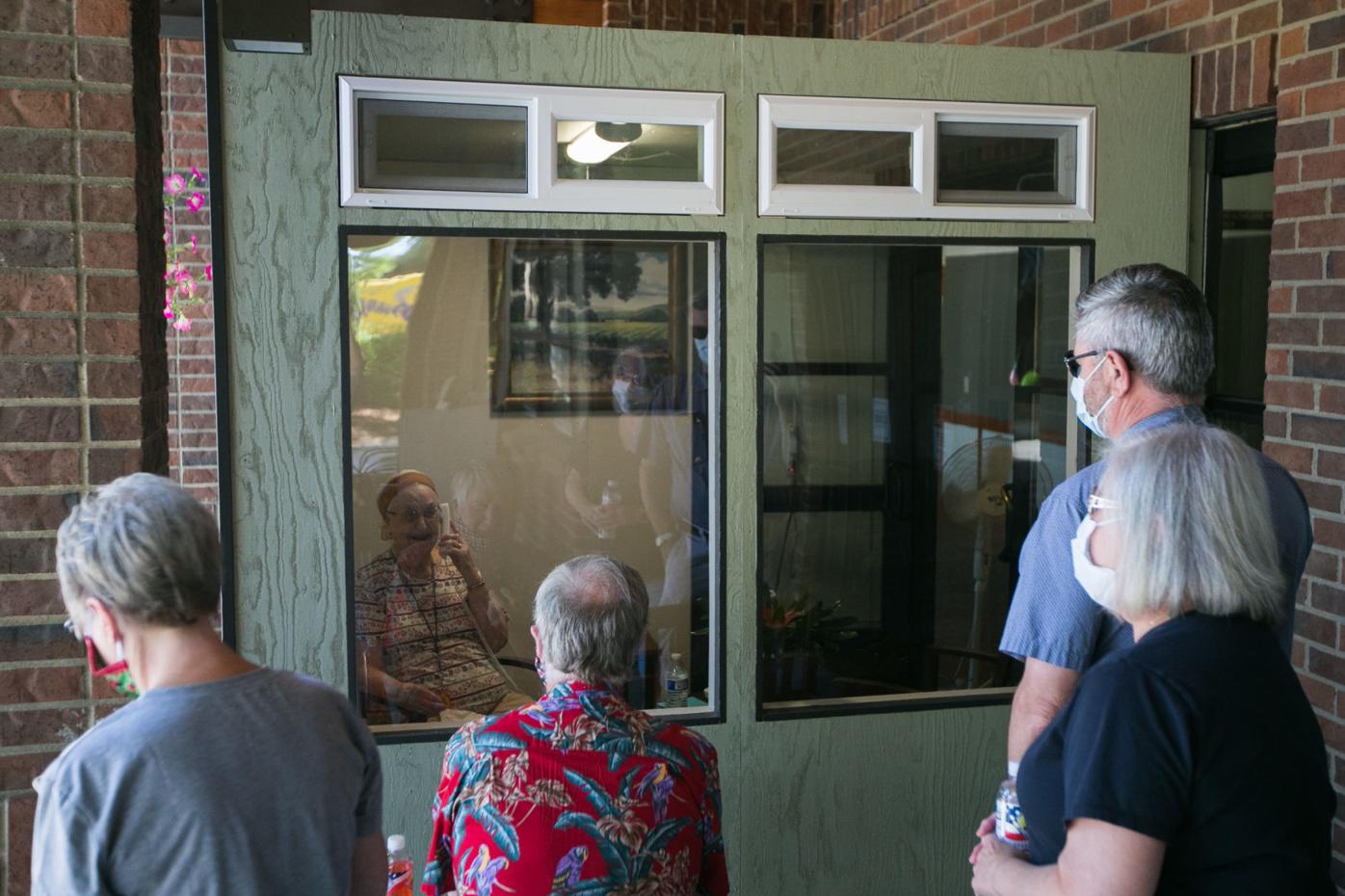 From left: Susan, Robert, Terry and Richard Lounsbury visit with Virginia Hathaway, 92, through the Chatter Box, a new feature at the Living Care Retirement Community, Friday, June 26, 2020, at 3801 Summitview Ave. in Yakima, Wash. The Chatter Box is a new effort to help residents safely see their families during the COVID-19 pandemic.

Robert, left, and Richard Lounsbury sit in front of the Chatter Box as they visit with their mother Virginia Hathaway, 92, Friday, June 26, 2020, at Living Care Retirement Community in Yakima, Wash. The Chatter Box is a new effort to help residents safely see their families during the COVID-19 pandemic.

Virginia Hathaway, 92, speaks through the Chatter Box telephone as she visits with four members of her family Friday, June 26, 2020, at Living Care Retirement Community in Yakima, Wash. The Chatter Box is a new effort to help residents safely see their families during the COVID-19 pandemic.

From left: Susan, Robert, Terry and Richard Lounsbury visit with Virginia Hathaway, 92, through the Chatter Box, a new feature at the Living Care Retirement Community, Friday, June 26, 2020, at 3801 Summitview Ave. in Yakima, Wash. The Chatter Box is a new effort to help residents safely see their families during the COVID-19 pandemic.

Four members of the Lounsbury family sat near the Chatter Box, a new feature of the Living Care Retirement Community in Yakima.

The box, made of painted plywood and two-by-fours, with a clear plastic window in the front, allows the long-term care center’s residents to visit with their families face-to-face, while maintaining coronavirus safety precautions recommended by national and local health officials.

Eva Lounsbury, executive director of the care center, said she never expected the COVID-19 pandemic to last as long as it has. But when Yakima County’s case counts kept climbing, she asked her father, Robert Lounsbury, to build the box as a way to keep residents connected to their families.

“Most of us thought in a couple of months, we would be through this,” she said. “We knew we had to do something to allow families and our residents to see each other, something more than connecting over the phone.”

Inside the box Friday was Virginia Hathaway, 92, whose birthday is Saturday. During the 45-minute visit, she listened to updates about her children and grandchildren and received birthday wishes.

Hathaway said she enjoyed her birthday visit with her family. She said using the Chatter Box was a bit awkward at first, but she added, “it’s better than without it.”

“We’ve always been a close-knit family,” she said. “It’s been hard. The distancing part of it is very hard. We feel isolated, even if there are other people near. But they are doing the best for us as they can, and you have to adjust.”

Residents in Yakima’s 11 long-term care centers have been on lockdown since March. Staff at various centers have found creative ways to keep residents connected with their families, who aren’t allowed to visit in person except for end-of-life services.

They’ve taught their residents how to use technology, like Zoom and FaceTime. They’ve allowed “window visits,” where families can see their loved ones through a window. They’ve also had staff dress up or deliver surprise treats to residents.

Although the extended lockdown has been hard on everyone, multiple centers have shared that they won’t reopen or relax their visitation rules until they know they can do so safely.

“We did not want people from the public entering our building,” she said. “We also needed a place that would be convenient and easy for our staff to clean.”

Three walls of the box are made with painted plywood and two-by-fours; the remaining wall includes a clear plastic screen for protection. Each side contains a phone, so families and residents can connect. The box took about three days to make and cost the center less than $2,000, Lounsbury said.

Families wanting to use the Chatter Box first sign up for an appointment online. The center allows up to five family members during a visit, which can last up to 45 minutes. Staff sanitize the phones and the box between visits. Appointments are available during weekday mornings and afternoons.

Lounsbury was grateful, in particular, that one of the center’s residents — who celebrated her 105th birthday recently — was able to see her family in person because of the Chatter Box.

“Without this, she never would have been able to see her family,” she said.

Living Care’s staff also have been trying to sustain cheer outside the Chatter Box’s walls. Staff dressed up as cows in early June and delivered frosty dairy treats to residents in early June. A Facebook post from center staff shows their efforts to maintain a sense of humor.

“It was legen-dairy,” staff wrote. “It was udderly amoosing. Some residents were near mooooooved to tears… of laughter.”

Staff at other long-term care centers also have tried to keep up resident morale amid the absence of their loved ones.

Highgate Senior Living Center in Yakima passed out plaques and Danishes for Father’s Day. The center also has resumed some programming for residents, including for a small number of residents who participated in painting birdhouse boxes.

“We’ve found that many residents prefer to connect with their families over the phone, and they all look forward to window visits — especially from their grandchildren,” the company said in a written statement. “We also regularly work with families and local community groups to host ‘drive-through parades’ where families and friends can come together to spread cheer to all members of our Prestige community from the safety of their vehicles.”

Prestige Care and Rehabilitation-Parkside in Union Gap will host a drive-thru parade with families July 3, where residents will be able to enjoy a summertime treat outdoors while families and friends share positive messages from a safe distance. For July 4, the center will have one-on-one games, crafts and activities for residents inside the center.

Toppenish Nursing and Rehab Center also will celebrate July 4 with outdoor activities, including hosting a fireworks watch party for residents who want to attend.

Prestige has continued door-to-door “happy hours,” hallway bingo and concerts and virtual exercise classes, as well as outdoor activities for residents who are able to go outside while socially distancing and following other recommendations.

“We continue to do everything we can to maximize the safety of our residents and consistently follow recommendations and guidelines set by the CDC, as well as those published by local and state health departments,” the company said.

Families of residents are noticing even the smallest efforts of the care centers.

Johnson said she enjoyed seeing her grandmother in a photo taken during a Yakima Vintiques slow-roll parade and another when Landmark staff were passing out popcorn. Baumgarten has 12 children, as well as grandchildren and grandchildren, and Johnson said the photos have made the rounds through the family.

“My cousin has been sure to share these posts and keep our family aware of these simple pleasures they are providing for our grandma,” Johnson said. “It was nice to see a photo of my grandmother smiling!”

Richard and Terry Lounsbury complimented the pictures and homey atmosphere inside the Chatter Box. They said the Chatter Box was a wonderful opportunity for residents who might not be want to get outside due to the summer heat but who may be struggling with depression because of the lockdown due to COVID-19.

“This shows the staff’s intent to do something to accommodate the residents, since we know it’s going to be going on for a while,” Richard Lounsbury said.

A June Facebook update from the Good Samaritan Health Care Center reported the center has not had any residents test positive for COVID-19 since May 7. But the post also noted the center likely will not be relaxing its visitation rules any time soon.

Good Samaritan cited Yakima County’s high case counts and said given the critical importance of limiting the spread of COVID-19, staff would need to carefully consider numerous factors before opening visits, including state and county mandates and recommendations, access to adequate testing and personal protective equipment for staff, and local hospital capacity.

The post noted Good Samaritan would follow the “most stringent recommendations” and that the center would likely lag behind the general community’s reopening progression by at least two weeks to keep residents safe.

“This serious and global pandemic has affected our community and only together, we can combat this virus,” Good Samaritan wrote. “Our team will continue (to) work hard to do our part to protect and care for the residents we serve.”

Willow Springs Care, also in a Facebook update, noted the center continues not to allow any visitors per state regulations, except for end-of-life visits.

“It is so hard to be in this position, working in long term care and feeling like the bad guy for keeping families apart,” she said. “We are doing everything we can, and we are thankful for the community supporting us and being patient with our process.”

The isolation of the COVID-19 pandemic has been especially difficult for long-term care center residents. Staff have tried to keep families co…