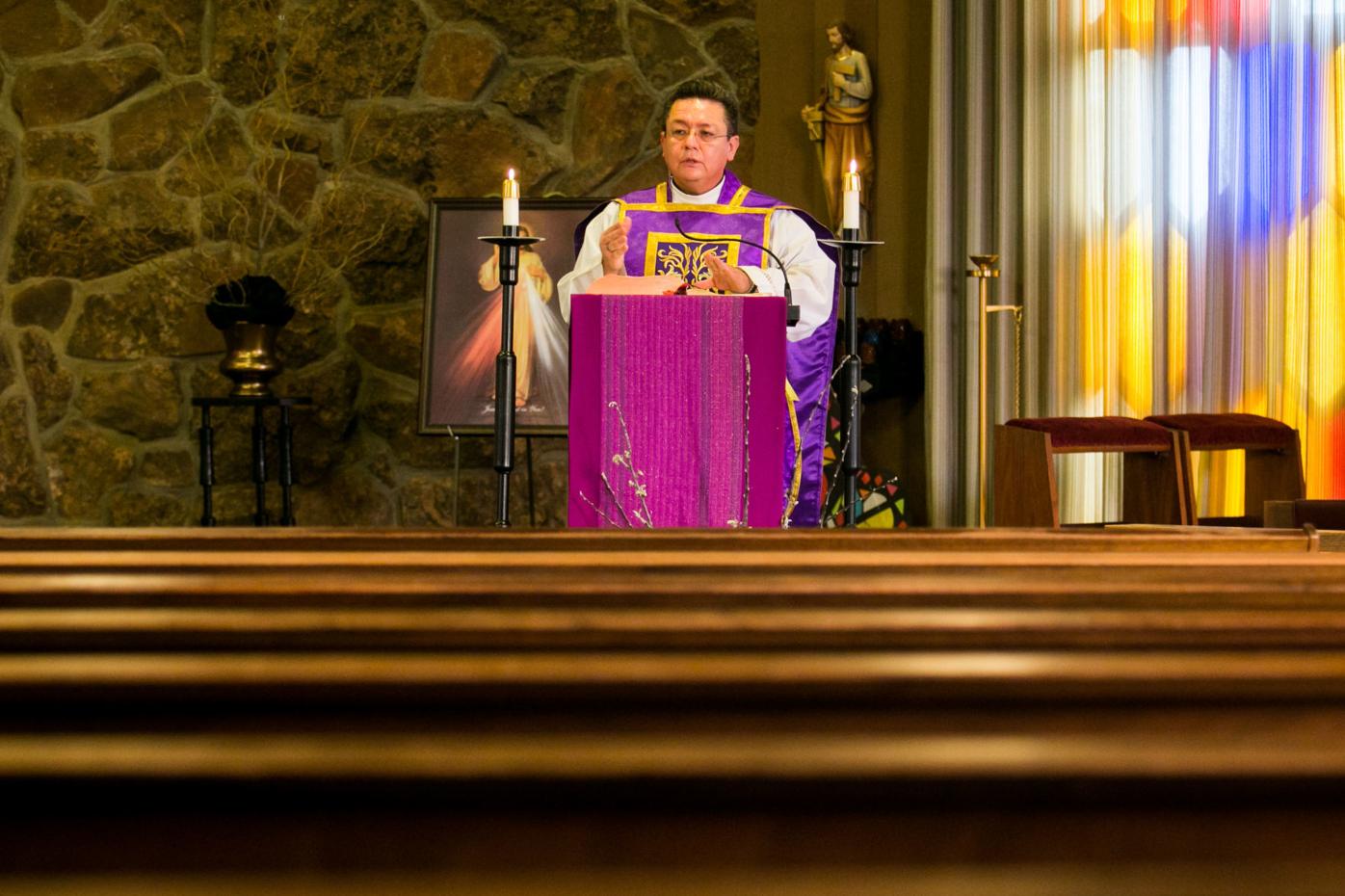 The Rev. César Vega leads a prayer in front of empty pews during a livestream Mass to home-bound congregants Friday, March 27, 2020, at Holy Family Catholic Church in Yakima, Wash. 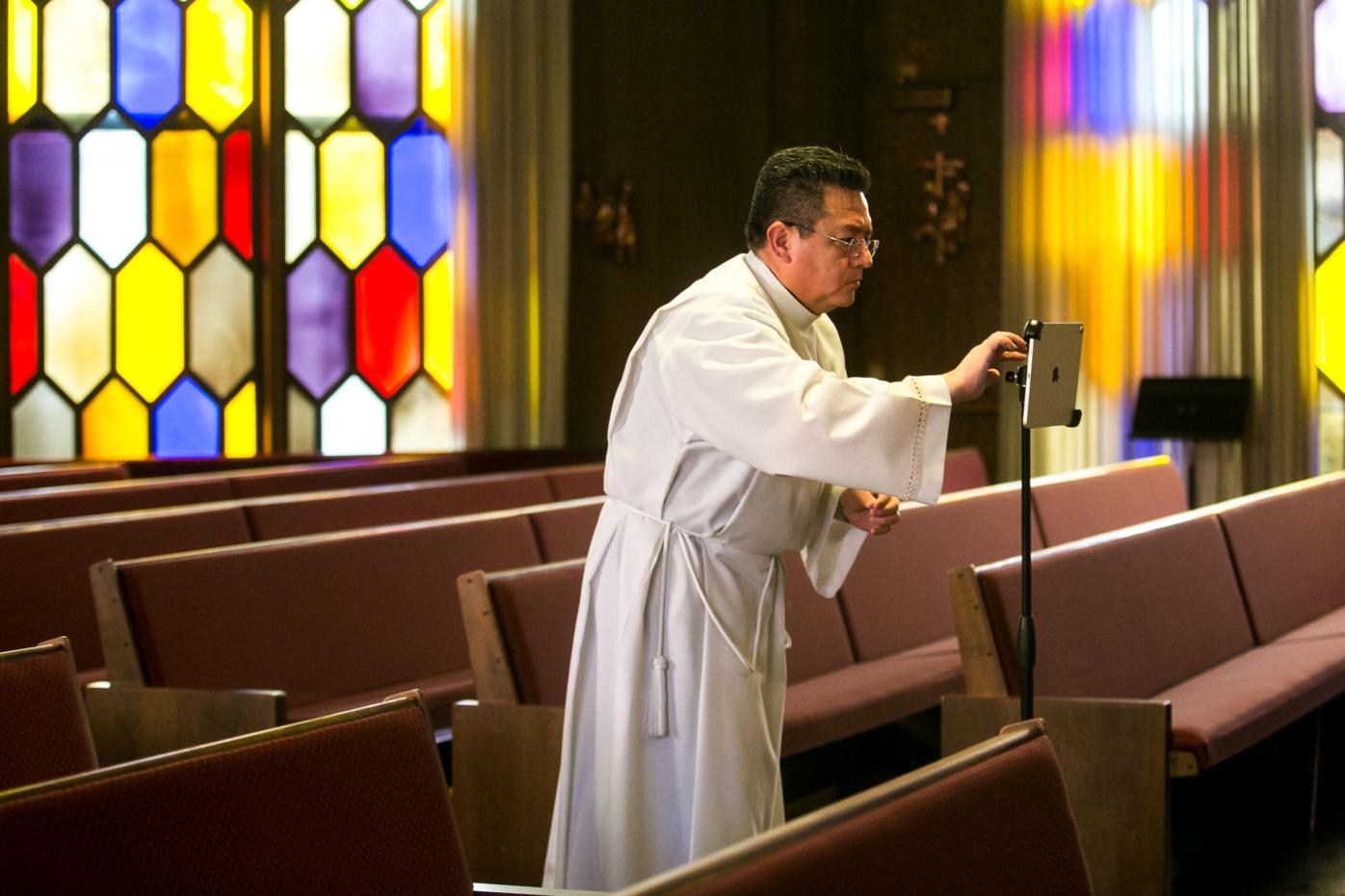 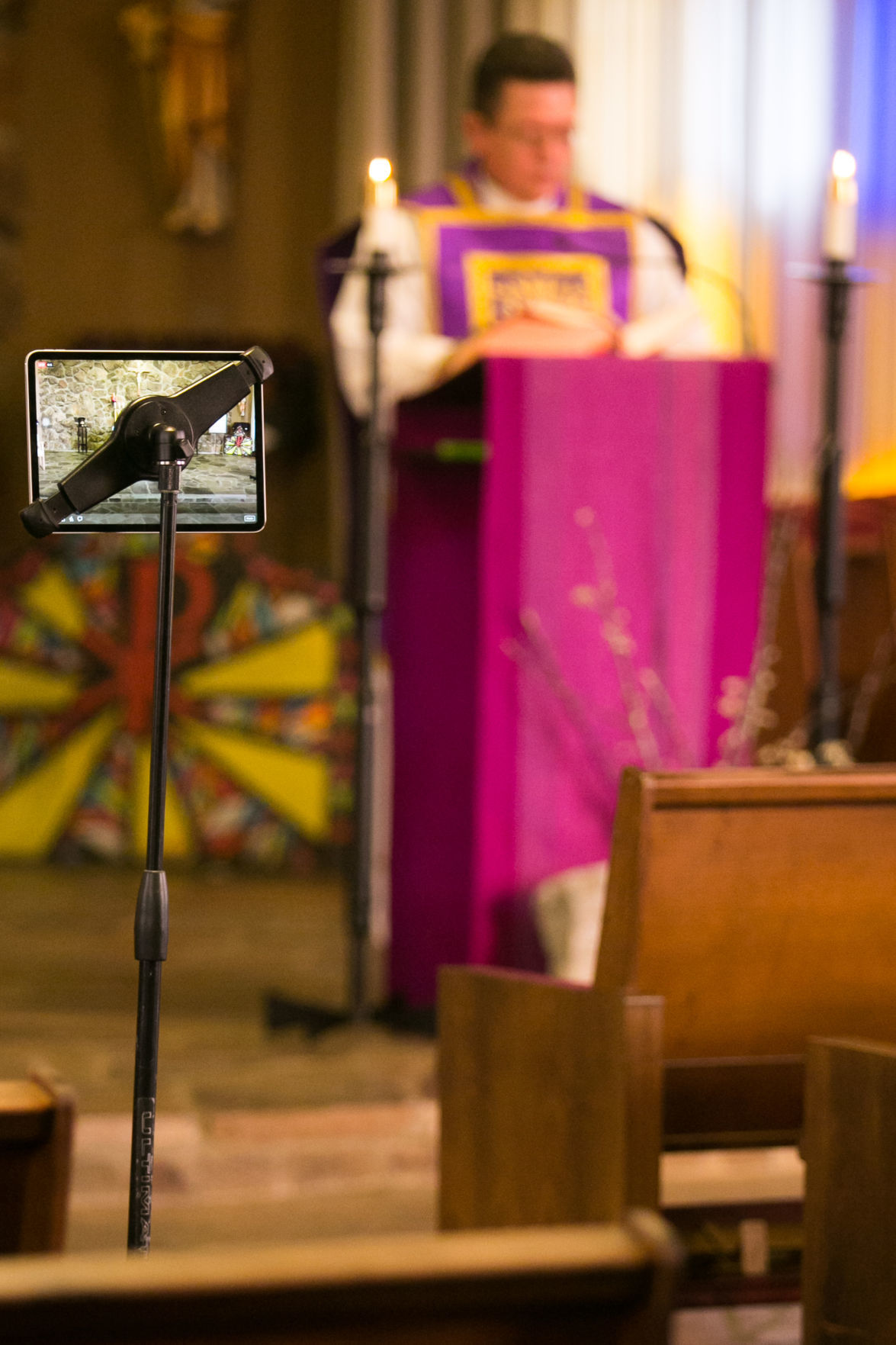 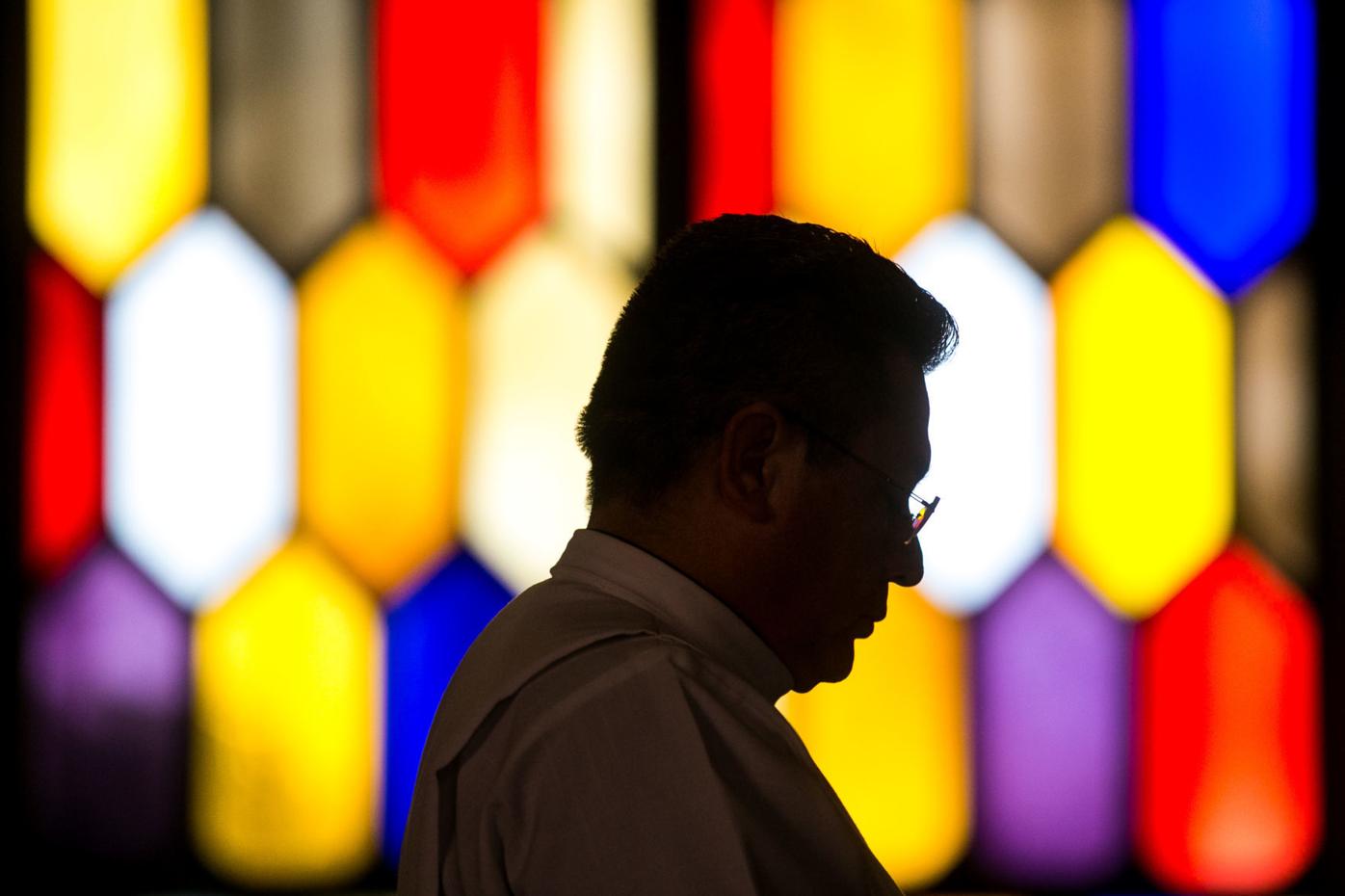 The Rev. César Vega says a prayer before he begins a livestream Mass to home-bound congregants Friday, March 27, 2020, at Holy Family Catholic Church in Yakima, Wash. 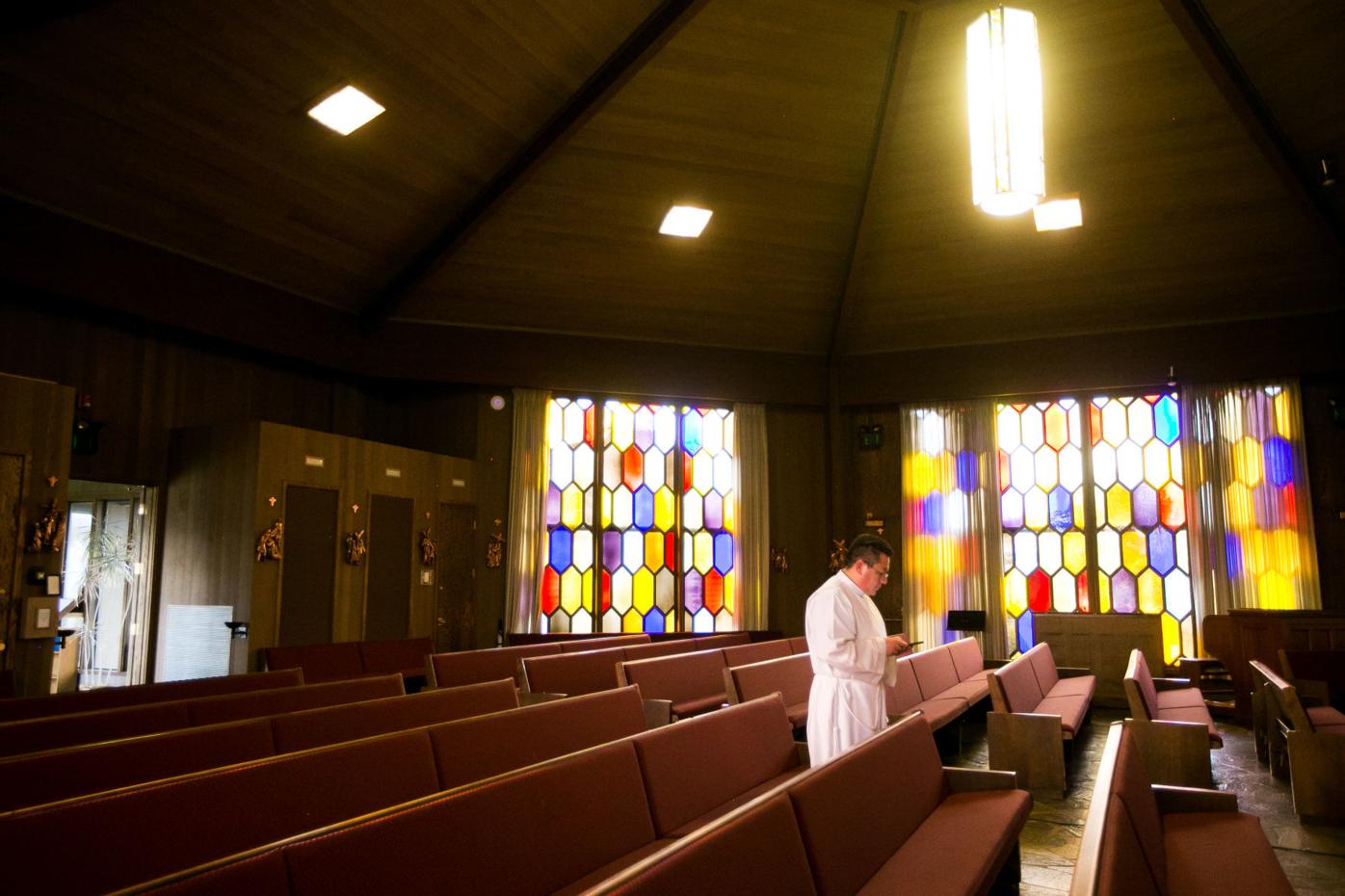 The Rev. César Vega leads a prayer in front of empty pews during a livestream Mass to home-bound congregants Friday, March 27, 2020, at Holy Family Catholic Church in Yakima, Wash.

The Rev. César Vega says a prayer before he begins a livestream Mass to home-bound congregants Friday, March 27, 2020, at Holy Family Catholic Church in Yakima, Wash.

YAKIMA, Wash. — On Friday the Rev. César Vega led evening prayer, and then Mass, at Holy Family Catholic Church in a setting familiar yet unusual.

Vega and a skeleton crew stood in an empty sanctuary, behind locked doors, as they livestreamed the prayers and Mass. Like thousands of other churches across Washington and throughout the country, they are following directives to limit the spread of the coronavirus.

Religious gatherings, along with weddings and funerals, are not allowed under Washington Gov. Jay Inslee's “Stay Home, Stay Healthy” order issued Monday. It is set to last two weeks, but might be extended. Inslee clarified Thursday that it's permissible for a few people to broadcast or livestream a religious service from inside a church.

On Friday, Yakima County health officials reported total COVID-19 cases had risen to 72, with three hospitalized and the rest recovering at home. Two people have died.

In a Facebook post early Thursday, the Diocese of Yakima said Genaro Ramos — deacon at St. Peter Claver Parish in Wapato — and his wife, Maria, were in Virginia Mason Memorial hospital being treated for COVID-19, and had been ill for about a week. Genaro Ramos was breathing with the help of a ventilator in intensive care, and his condition was reported as stable, the post said.

The Yakima Diocese temporarily suspended the public celebration of Mass earlier this month, and granted dispensation from the obligation to attend Mass.

At the same time, faith communities want to keep offering opportunities for prayer, worship and support. For Christians, those connections are important during the Lenten season. The diocesan website, yakimadiocese.org, has a decree establishing pastoral directives during the coronavirus pandemic, including the plan for Holy Week.

On Thursday, the Right Rev. Gretchen M. Rehberg, bishop of the Episcopal Diocese of Spokane in Eastern and Central Washington, extended her request that congregations continue to suspend corporate, in-person worship through the end of April.

"If we are able to return to in-person worship before the start of May I will make that call and we will all rejoice," Rehberg wrote. "It seems prudent, however, to err on the side of protecting each other. It is the loving thing at this time to remain apart physically while we reach out in other ways to stay connected."

As that continues, many faiths are exploring options such as livestreaming services, posting prayer guidance and religious readings on social media and helping others, such as shopping for housebound neighbors and sending messages of support.

In her most recent email, Rehberg said the Episcopal diocese will continue to offer home worship materials along with online worship. She will celebrate Easter, which is April 12, in a small online event.

"Our buildings may be empty, but Christ is alive and so are we!" she wrote.

Easter Mass to be televised

Yakima Bishop Joseph Tyson will celebrate Easter Sunday Mass at 4:30 p.m. from St. Paul Cathedral in Yakima. It will be broadcast on KIMA TV channel 29 in Yakima, channel 51 in Ellensburg and KEPR TV channel 19 in the Tri-Cities.

He will also have a Palm Sunday mass at noon on CW9, Tyson said in a Facebook post.

"Many prayers for our many homebound and to all of you in this time where we must stay at home," he wrote.

Many Catholics are struggling with the fact that they can't regularly receive Communion this Lent. They're being asked to fast from that, along with Confession, under the governor's order, said Monsignor Robert Siler, chancellor with the Diocese of Yakima.

"That is also very upsetting, particularly since Lent is a time to especially seek forgiveness of sins and to try to be more deeply converted to the Christian life," Siler said.

Tyson has been pointing them toward a reflection by Emeritus Pope Benedict XVI, from one of his books, regarding St. Augustine, who refused Holy Communion at the end of his life to be in solidarity with his flock unable to receive communion, and to appear humbly before God, Siler said.

"One of Benedict's key points is that sometimes we can take Holy Communion too casually; that intentionally fasting from it can sharpen our sense of longing," he said.

Indigenous woman missing from Tulalip Reservation, FBI offering up to $10,000 for information

Two priests in the Diocese of Yakima stricken with the coronavirus continue to recover at private residences.

The Rev. José de Jesús “Chuy” Ramírez, 69, a senior priest of the Diocese of Yakima in residence at Our Lady of the Desert Parish in Mattawa, tested positive for COVID-19, Bishop Joseph Tyson announced March 22.

Suffering only mild cold- and flu-like symptoms, Ramirez was ordered by the Grant County Health District to remain in self-isolation until 72 hours after his symptoms have completely cleared up, which could have been as early as Tuesday.

Tyson has asked him to continue to stay home and rest, according to a news release. His symptoms have subsided but he could be more susceptible to other illnesses during the continuing cold and flu season.

Ramírez shares a residence with the Rev. Alejandro “Alex” Trejo, pastor of the parish in Mattawa. He tested positive a week before that.

Trejo, 48, was released from Kadlec Medical Center in Richland on March 18 after 11 days in intensive care, where he was treated for pneumonia stemming from the coronavirus. He continues to recover slowly at a private residence in Yakima, with skilled nursing care.

"Thanks for your continued prayers for Fr. Alex. I just popped over to see him. He’s doing much better. I kept my required distance," Tyson wrote in a Facebook post on March 25. "He’s not getting regular visitors yet and has another week or so to go but he’s doing much better."

A Catholic priest in Mattawa has tested positive for COVID-19.