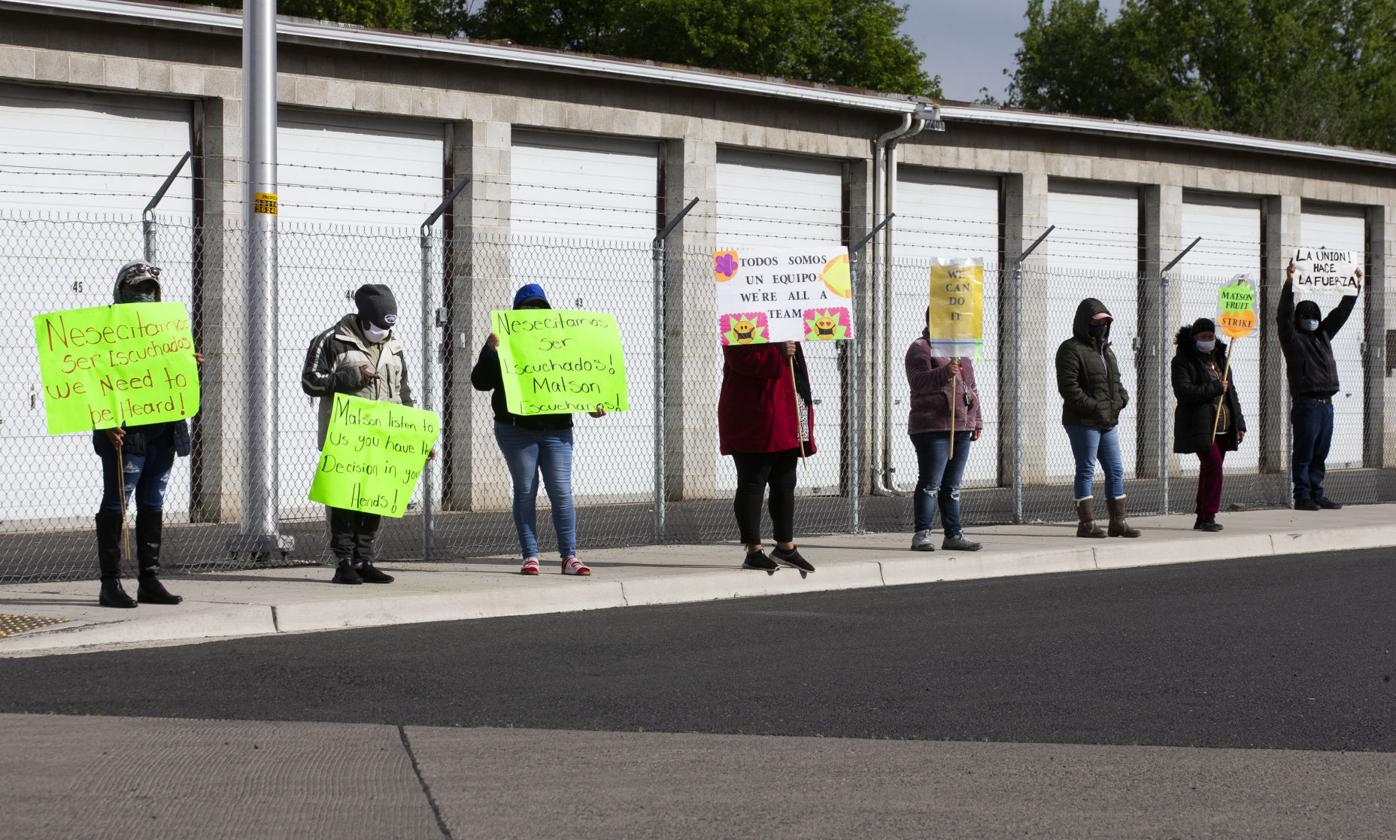 Striking workers protest across the street from Matson Fruit on Friday, May 22, 2020, in Selah, Wash. 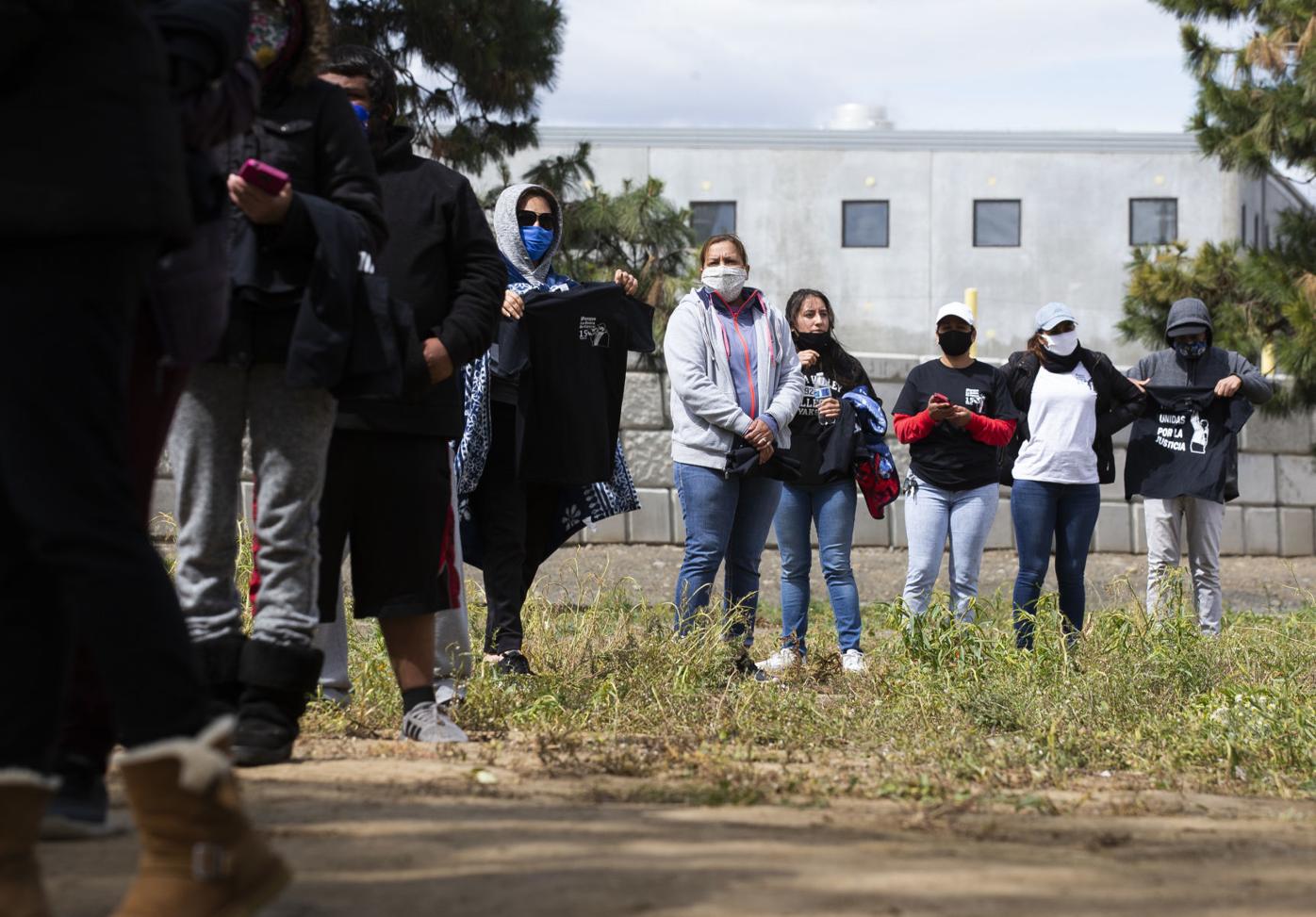 Striking workers line up to speak with organizers at Jack Frost Fruit Co. on Friday, May 22, 2020, in Yakima, Wash. 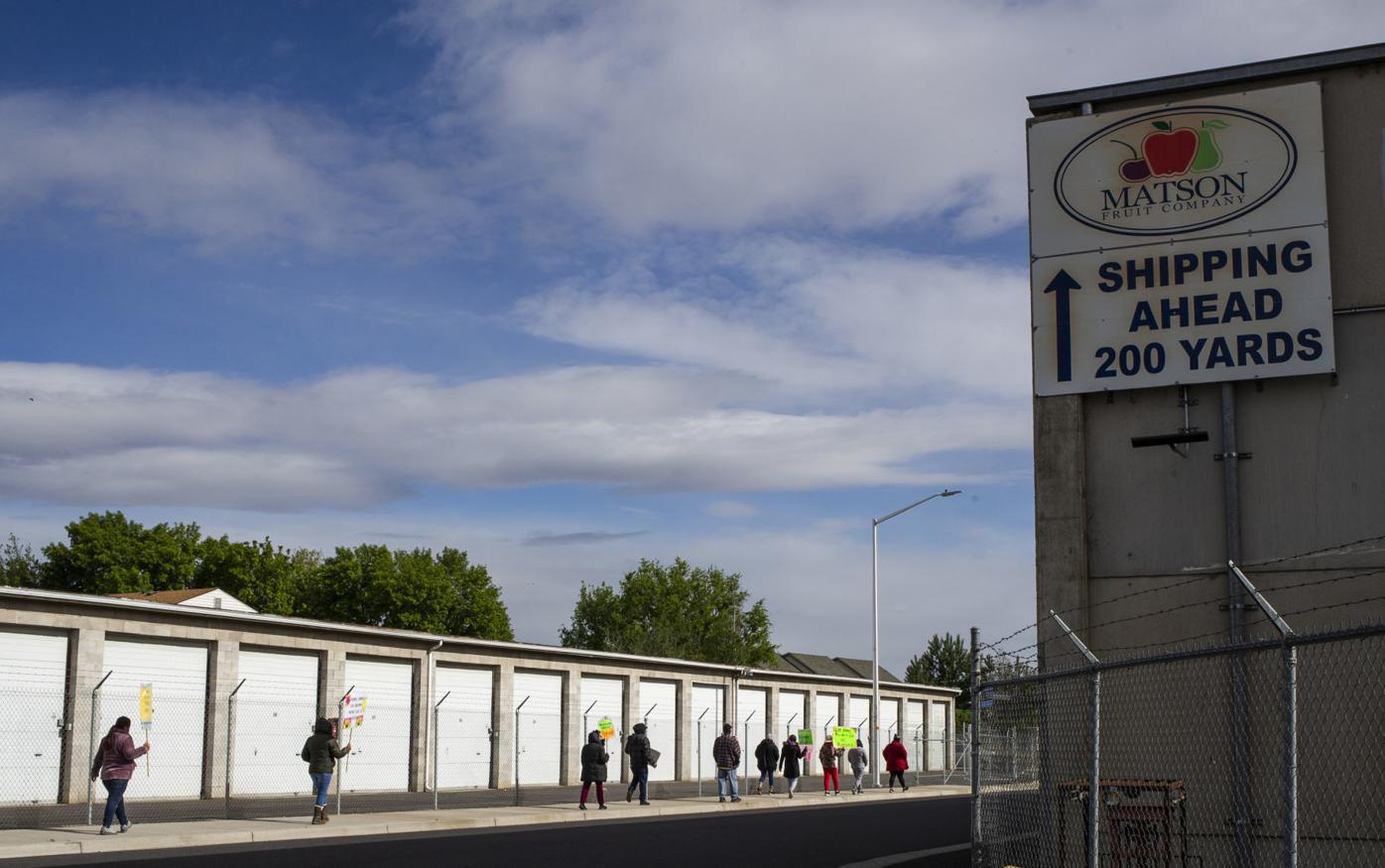 Workers on strike protest across the street from Matson Fruit on Friday, May 22, 2020, in Selah, Wash.

Striking workers protest across the street from Matson Fruit on Friday, May 22, 2020, in Selah, Wash.

Striking workers line up to speak with organizers at Jack Frost Fruit Co. on Friday, May 22, 2020, in Yakima, Wash.

Workers on strike protest across the street from Matson Fruit on Friday, May 22, 2020, in Selah, Wash.

Striking workers and company officials at Monson Fruit in Selah came to an agreement Friday.

Workers and management at Jack Frost almost did.

Walkouts that started May 7 spread to six Yakima fruit packing operations. Workers demanded improved social distancing and sanitizing measures to protect themselves against the coronavirus, as well as hazard pay and salary increases.

Inspectors from the Yakima Health District cleared the companies, saying they meet the recommended guidelines. The Yakima Herald-Republic has made a public records request for inspection results from the state's Department of Labor and Industries but was told records would not be available until June 22. Tim Church, a spokesman for LNI, said some inspection reports — including at Allan Bros — have not yet been finalized.

A committee of Monson workers said Friday that the company’s solution had focused on safety measures, and strikers would go back to work while continuing to negotiate for wage increases. Jack Frost management also pitched a proposal to workers focused on safety that almost led to an agreement with workers.

Meanwhile, workers continued to strike at Matson Fruit in Selah, Columbia Reach Pack and Hansen Fruit in Yakima, and Allan Bros. Fruit in Naches, with the huelgas — strikes — planned to continue throughout the weekend.

“There’s been progress made at all the warehouses still on strike with sanitation and safety,” Gutierrez said. “That is already a victory for every huelga that’s happening.”

Kathy and Adrian Mendoza, a sibling duo who had been on strike at Monson, said the company had addressed the worker concerns about cleaning, social distancing and safety. Workers will continue to negotiate for wage increases while working.

“The representative came out and gave a few words and everybody was really happy,” Kathy Mendoza said. “They are all happy that this is over.”

Adrian Mendoza thanked everyone who supported the workers, including people he said came from Tacoma, Oregon and New York to support the strikers’ cause.

“It was not easy for us to do this, but we did it and there slowly will be progress,” he said. “It was definitely worth the fight. We are happy that our voice is finally being heard.”

Monson Fruit management did not return comment prior to publication of this story.

Workers gathered in a circle Friday afternoon at Jack Frost Fruit for a confidential briefing from a worker committee.

Maureen Darras, of Community to Community Development in Bellingham, said the committee had been meeting with company leadership for the past week.

“Workers are showing across the Yakima Valley that they know how to negotiate and they know what they need,” she said. “They’ve been strong and motivated. We’ve just been here for support.”

Darras added that female workers have been at the forefront of the strikes, from organizing the huelgas to leading chants.

“The reason women are leading the strikes is that they are the ones most directly impacted,” she said. “Most of the workers on the pack lines, where people are working back-to-back and shoulder-to-shoulder, are women.”

Darras said men have walked out of jobs in areas where social distancing is more possible — such as cold storage or the shipping or repacking — in solidarity with the women.

Earlier, the workers had formed a circle to share their reasons for striking. Many of the men said they were concerned about the well-being of their mothers, aunts, or grandmothers who worked at the company, Darras said.

Arely Perez, a Frosty employee who is part of the worker committee, said worker concerns about social distancing and sanitizing have been addressed by the company, though workers were not granted hazard pay or salary increases.

“We’ve won a lot,” she said. “We will be going back to work next week. We want to thank the community and everyone who supported us.”

Brian Bruner, operations manager at Jack Frost, said the company had pitched a new 12-week program aimed at improved safety to workers as its negotiations proposal. Workers who adhere to the social distancing and sanitizing recommendations for that period will receive a $200 bonus at the end of the 12 weeks, he said.

Bruner said the proposal shied away from the requests for hazard pay or salary increases to keep the focus on safety during the COVID-19 pandemic.

“For us, it was about safety, and for our workers it was the same,” he said around 4 p.m. Friday. “It was painful to have the crew divided. We’re really pleased with the outcome, and we’re excited to welcome everyone back on Tuesday.”

But that had changed by Friday evening.

Bruner said workers had contacted him after the 4 p.m. phone call to inform him they had additional demands, including written documents. Bruner said that he had no additional information about what the workers might need to come to an agreement.

“I’m not sure that we are 100% at an agreement,” he said. “There will have to be more conversations. We are 100% on board with any safety-wise requests.”

As for the remaining strikes on Friday:

Matson said the company has committed to immediately spending an additional $75,000 on accommodations for dealing with the pandemic. He also signed an agreement to continue good faith discussions with the worker team, keeping them informed of health and safety issues that might surface at the company.

He presented that agreement Friday morning to workers, who asked for time to review the document before signing it. He said two worker representatives signed the agreement as of Friday afternoon and that he plans to meet with the team again Monday.

Rosa Leon, an employee at Matson Fruit who is part of the worker committee, said workers are happy with how negotiations are progressing.

“They are listening to us and agreeing to almost every point,” Leon said. “They have also asked for our suggestions on how they can make the workplace better and what’s working.

“For our boss to ask for our opinion, that’s a good thing. It’s a big relief, because today is our 11th day on strike.”

Strikers at Columbia Reach in Yakima held a new set of signs on Friday, including one that read, “WE ARE READY TO WORK — NEGOTIATIONS.”

Columbia Reach did not return calls for comment prior to publication of this article.

Julieta Pulido, a member of the Columbia Reach workers’ committee, said attempts to petition have been unsuccessful. Pulido said the committee submitted a document to company leadership Tuesday that reached the owner, whom she said “decided he wanted to wait.” Workers were supposed to get an update Friday. But as of Friday afternoon, Pulido said that communication hadn’t happened.

Pulido, who is five months pregnant and works at the company to support herself, said several strikers have decided to go back to work, given that no resolution seems to be in sight. But she will not.

“I understand that people have bills to pay, but I believe in this cause,” she said. “The main reason we walked out is because we feel unsafe at work, and we want them to take the safety measures seriously.”

Pulido said workers stay motivated by focusing on their right to a safe workplace. Community support also has helped.

“There has been a lot of support,” she said. “That’s what keeps us going.”

Editor's Note: This article has been updated to reflect that the Yakima Health District has completed reviews that found grower facilities to be meeting guidelines, with inspection results from the State's Department of Labor and Industries still pending.