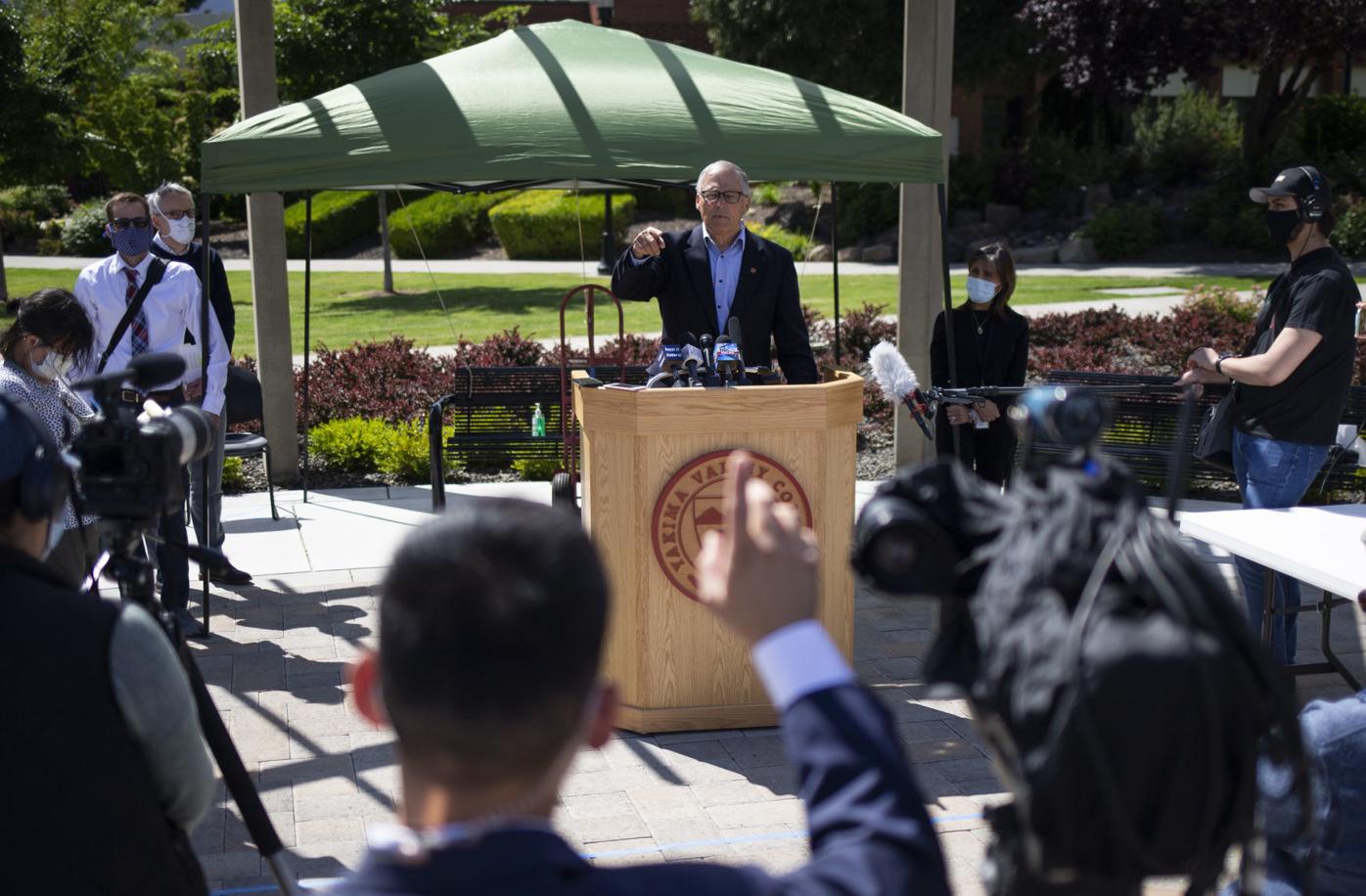 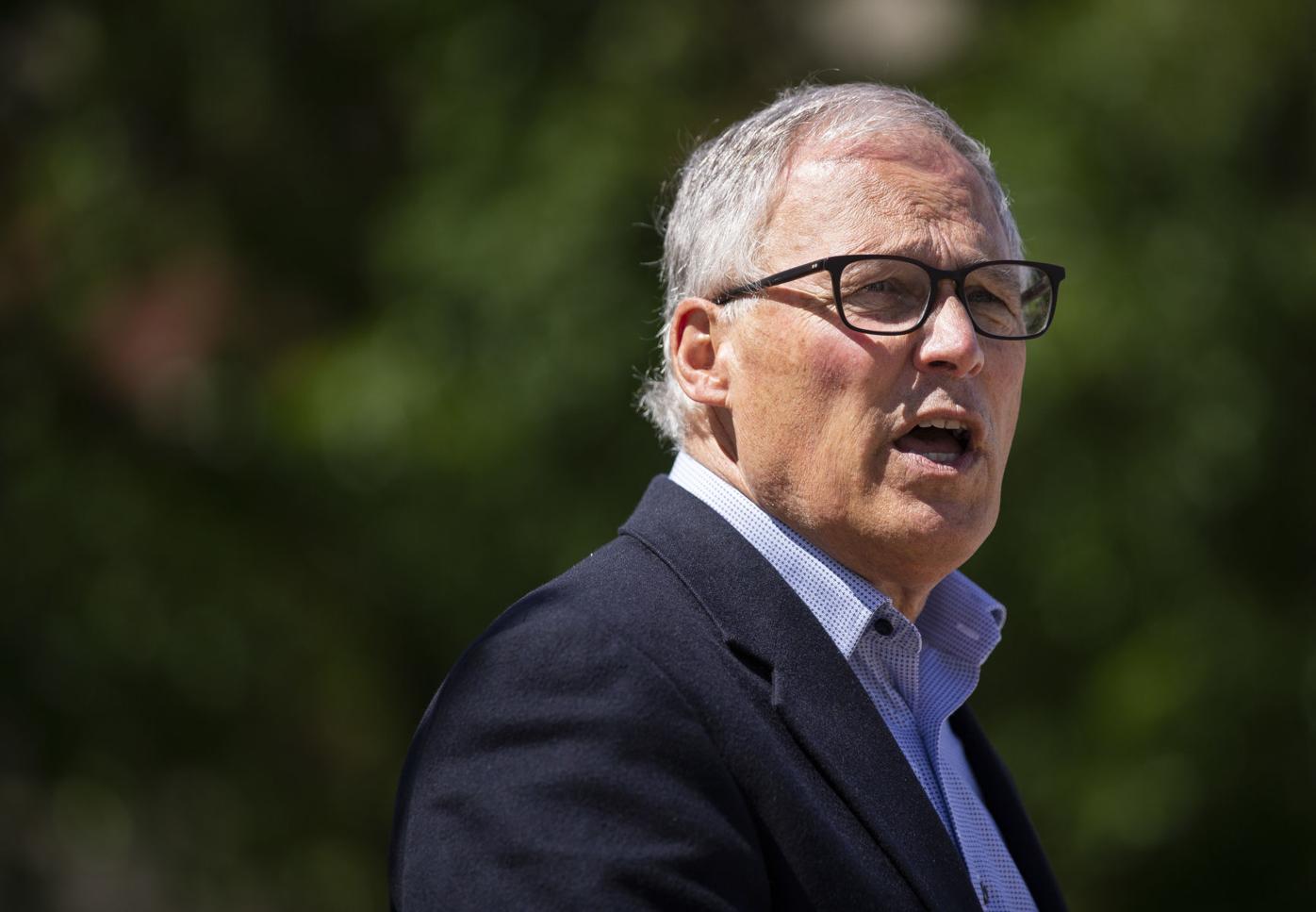 Yakima County residents will have to wear masks if they go out in public, Gov. Jay Inslee announced Saturday.

Inslee is preparing a proclamation that will make mask use mandatory to avert what he described as an “imminent explosion” of coronavirus in the county. It is expected to be ready on Monday or Tuesday, according to Inslee spokeswoman Tara Lee.

“It is a legal requirement; it is not just a suggestion,” Inslee told reporters during a Saturday news conference. “It is required if we are going to prevent this disaster from overtaking this beautiful valley.”

Under the order, businesses will have to adopt a “No mask, no service” policy, he said.

He also said the state has trained 1,000 contact tracers and is providing the Yakima Health District with $6.5 million in funding to help with efforts to rein in the county’s growing number of coronavirus cases.

Inslee’s announcement comes after a meeting Tuesday with community leaders and business representatives amid a continuing rise in coronavirus cases in the county. Inslee said Yakima County’s per-capita rate of new cases is the highest in the western United States.

As of Thursday, the rate was almost 700 per 100,000 people over the previous two weeks, according to the state Department of Health. That is about 28 times higher than what is required to move to the next phase of the “Safe Start” reopening program.

By comparison, 55.4 people per 100,000 tested positive statewide during the same time period.

Dr. Tanny Davenport, head of quality and safety at Memorial, said 22 people were transferred from the hospital in the past two days, both people with COVID-19 and those without.

“One thing we thought early on (in the pandemic) was that it would be space or equipment issues,” Davenport said, adding that staffing is a bigger issue. “Those patients require more workforce, and we simply don’t have the workforce.”

Earlier, plans were made to reopen the shuttered Astria Regional Medical Center to provide hospital space for non-COVID-19 patients and free up beds at Memorial. Vice Adm. Dr. Raquel Bono, director of the state’s COVID-19 response, said Astria likely would not be reopened because there was adequate bed space statewide.

When her team visited Yakima earlier this year, they found “in order to have Astria facility stood up we’d need additional personnel we did not have … and our better opportunity in supporting any kind of surge was optimizing the capacity across the state,” she said.

Inslee said he fully understands the effect stay-home orders are having on businesses, but “the best thing we can do to strengthen this economy so we can reopen fully is to stop the spread of this disease.”

He noted the efforts by the Greater Yakima Chamber of Commerce to increase mask use before his announcement.

And it is not just Yakima County that could be affected if the virus’ spread is not contained. If Yakima County cannot contain the virus, it will spread to other parts of the state, Inslee warned.

“As Yakima County goes, so does the rest of the state,” Inslee said.

While she does not yet know what role the health district would play in the execution of Inslee’s order, Bravo said the district will likely maintain its policy of educating the public as to why they should use masks.

As for the funding, Bravo said those details are being worked out, but said it would likely be used to enhance the disease outbreak team by providing for more people, as well as improving communication and coordinating help for people to stay isolated if they test positive.

Secretary of Health John Wiseman said it is incredibly important that people stay at home as much as possible and limit contact with others. He strongly encouraged people not to have gatherings for Father’s Day or July 4.

“These are times when we want to be spending time with family and friends and it is simply too dangerous to be doing that,” he said.

Inslee said the situation in Yakima is personal for him, as his three sons were born at Memorial. He said transmission of COVID-19 is occurring everywhere in the community, not just in one sector. And he had strong words for people who downplay the virus.

“These cases are not just numbers, they represent people. And the virus that afflicts them poses a cascade of threats, economic and personal,” he said. “We can’t just put our heads in the sand and let this roll over us.”

Health District data shows no new deaths, with the death toll remaining at 118. Fifty-two people were hospitalized, a decrease of one, while the number intubated remains at 10.

As of Saturday, 2688 people have recovered, meaning that it has been at least 28 days since they tested positive and they are neither hospitalized nor dead.