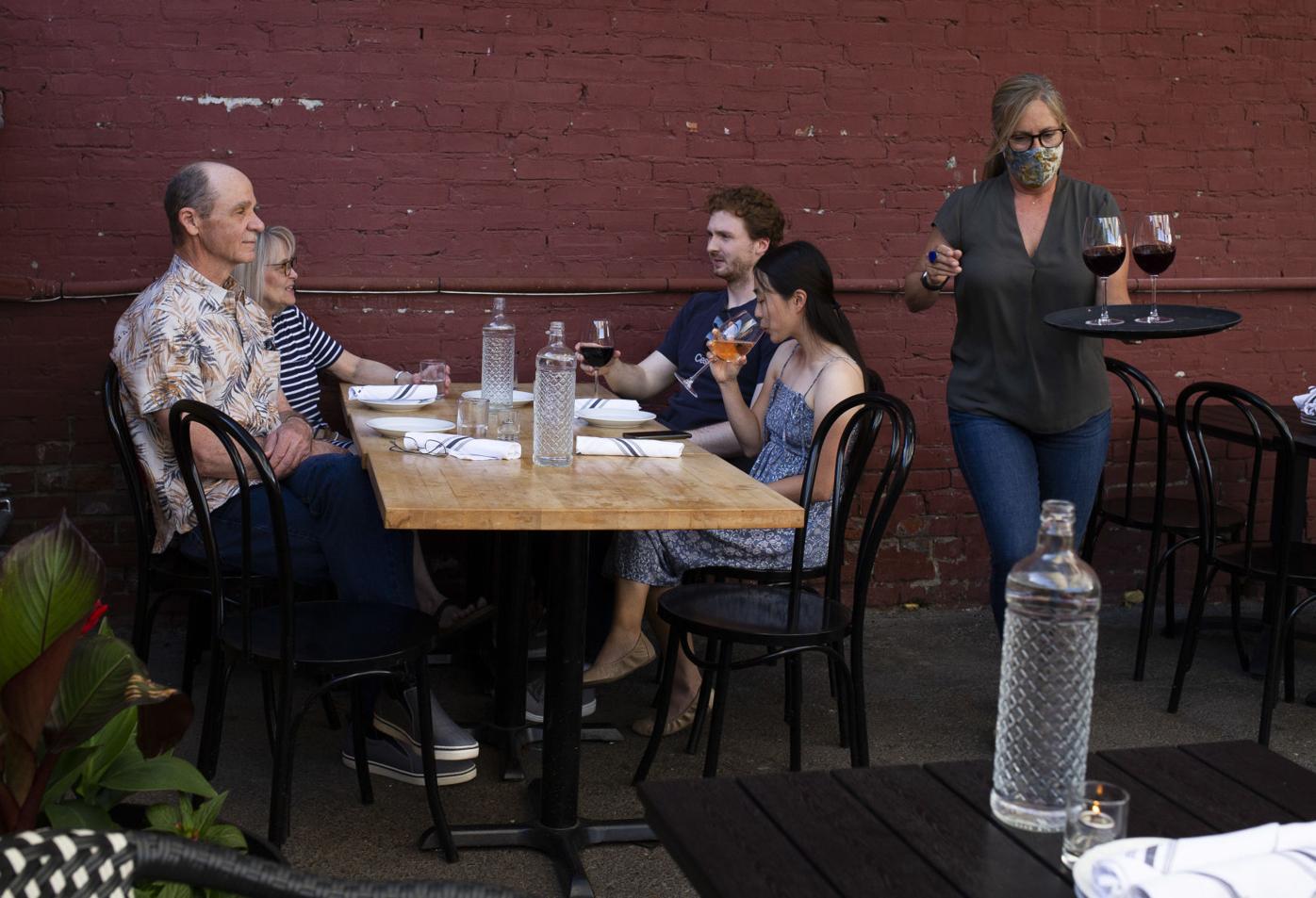 Kelly Hottell brings wine to customers sitting in the outdoor dining area at Crafted on Saturday, May 29, 2021, in Yakima, Wash. 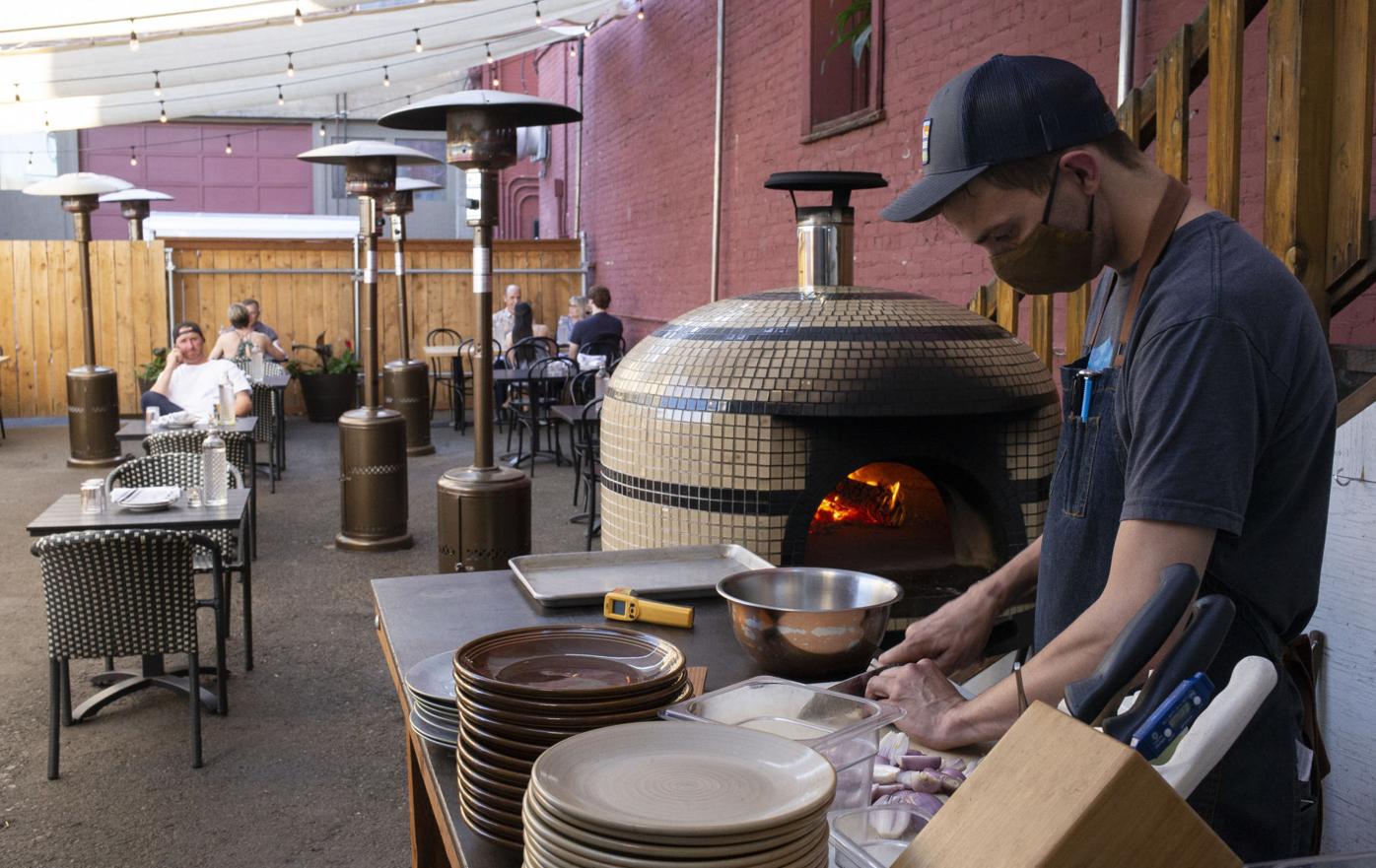 Drew Alexander dices shallots at the wood-fired oven cooking station as customers eat and drink in the outdoor dining area at Crafted on Saturday, May 29, 2021, in Yakima, Wash.

Crafted, the hip downtown Yakima restaurant, has a beautiful courtyard, tucked just far enough away from the hustle and bustle of nearby Yakima Avenue that it seems like a secret, secluded place.

It’s shaded overhead by fabric sails, it’s lit with strings of hanging lights and it’s invariably full of customers — the sort of scene people photograph for their Instagram feeds. And the whole space didn’t even exist a year ago. Not like that. The restaurant used the area for the occasional small concert or special event, but it wasn’t part of the regular dinner service. Then came COVID-19 and restrictions on indoor dining.

Like plenty of other restaurateurs, Crafted’s owners, Dan and Mollie Koommoo, had to get creative with their space.

“I don’t think we ever would have used that space back there like that if COVID hadn’t happened,” Mollie Koommoo said.

So now, with indoor dining limitations easing and vaccines offering a glimpse of a post-pandemic life, Crafted, 22 N. First St., has a pretty great outdoor dining area. And it plans to keep it. The Koommoos aren’t alone in that. Several local restaurants are keeping the changes they made out of necessity even as the necessity appears to be nearing an end.

Before the pandemic hit in March 2020, Doug Granstrand, who owns the popular downtown restaurant and bar Bill’s Place, 206 S. Third Ave., had built an extension to the building that was supposed to be a semi-enclosed smoking area.

“But because of COVID, we had to kind of turn it into an enclosed dining area,” he said.

Just like at Crafted, the space turned out to be a hit with customers. All Granstrand did was take up a couple of parking spots in his lot and hang up sun-blocking sails, and all of a sudden he had an extra 1,300 square feet of restaurant space that seats about 50 people. The permitting process was simple, he said. The state Liquor Control Board was working quickly to help businesses like Bill’s figure out how to stay open, Granstrand said, so the increase of alcohol-serving space was approved in just a couple of days.

Now, despite it never having occurred to him prior to the pandemic, he’s glad to have the space and planning to add a hard-shell cover to it to make it permanent. That will require a city permitting process, but it should be “pretty cut and dried,” he said.

“I think we did a pretty good job of making a nice area,” Granstrand said. “Some people, that’s the only place they’ll sit anymore.”

“I’d say that it worked great for the restaurants who participated. ... The review was minimal, we basically wanted to make sure that accessible parking was still available and that access to pertinent utilities like fire hydrants and manhole covers was maintained,” he said.

The restaurants that used that process — neither Crafted nor Bill’s needed to because their outdoor spaces already existed in some form — can now apply for the permits to make their outdoor seating permanent, Calhoun said.

“Powerhouse Grill recently did that and we approved them for permanent outdoor seating area earlier this month,” he said.