Sign Up
Log In
You are the owner of this article.
Edit Article Add New Article
You have permission to edit this article.
Edit
Home
News
Election 2020
Bottom Line
Sports
SCENE
Photos & Video
Opinion
Obituaries
Unleashed
Classifieds
The Vanished
1 of 5 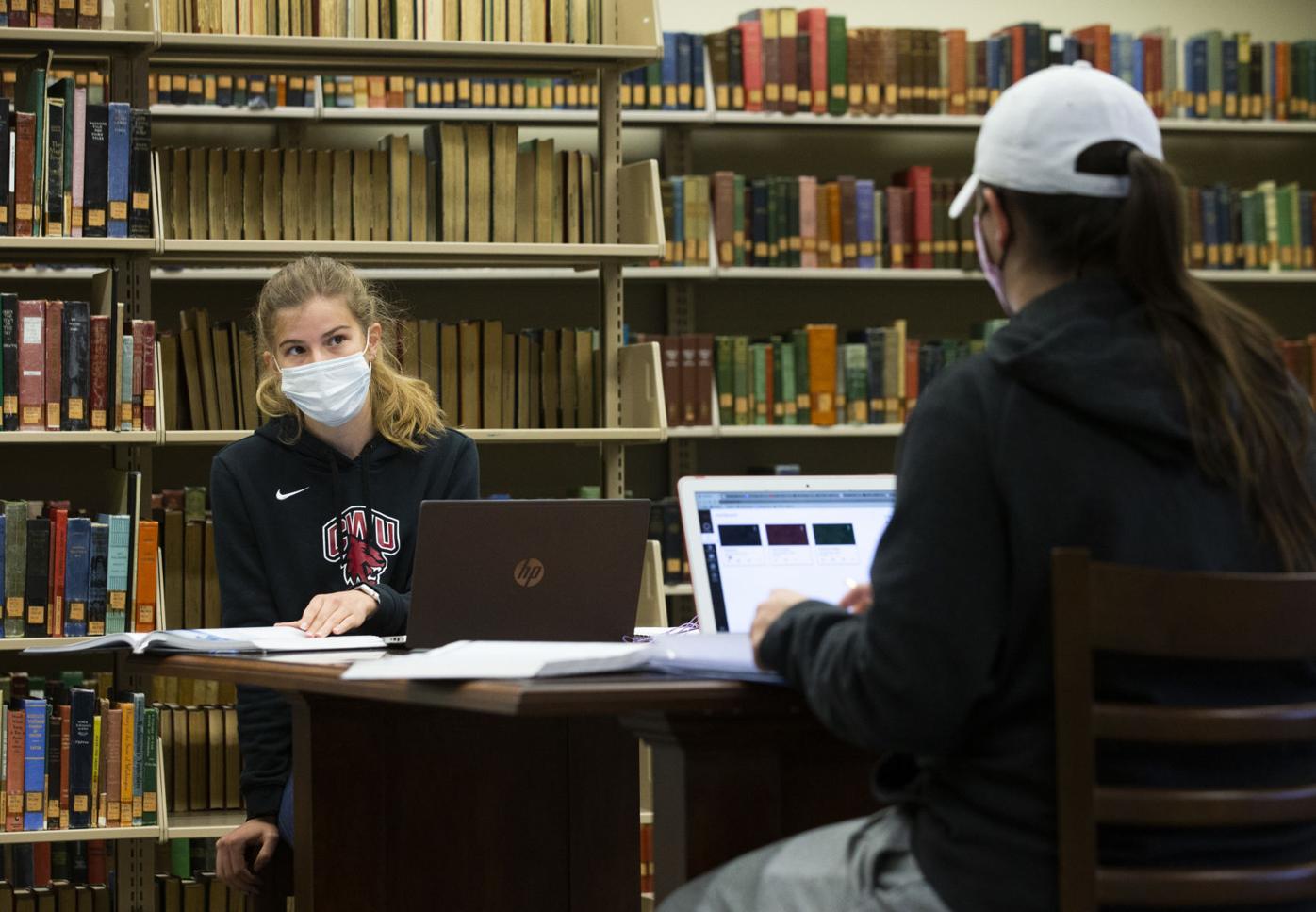 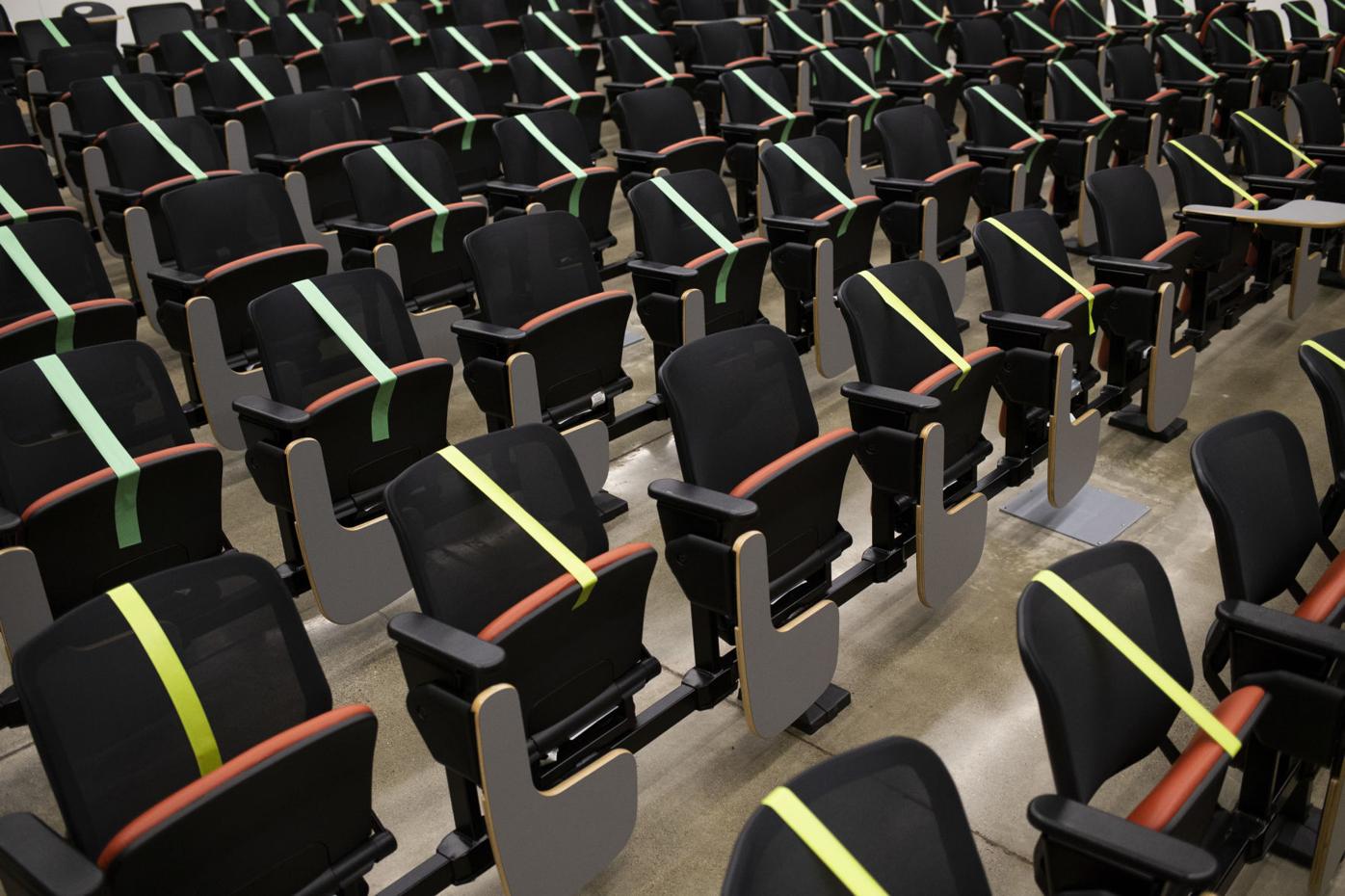 Chairs in a lecture hall are closed off with tape to keep students separate at Central Washington University in Samuelson Hall on Thursday, Oct. 1, 2020 in Ellensburg, Wash. 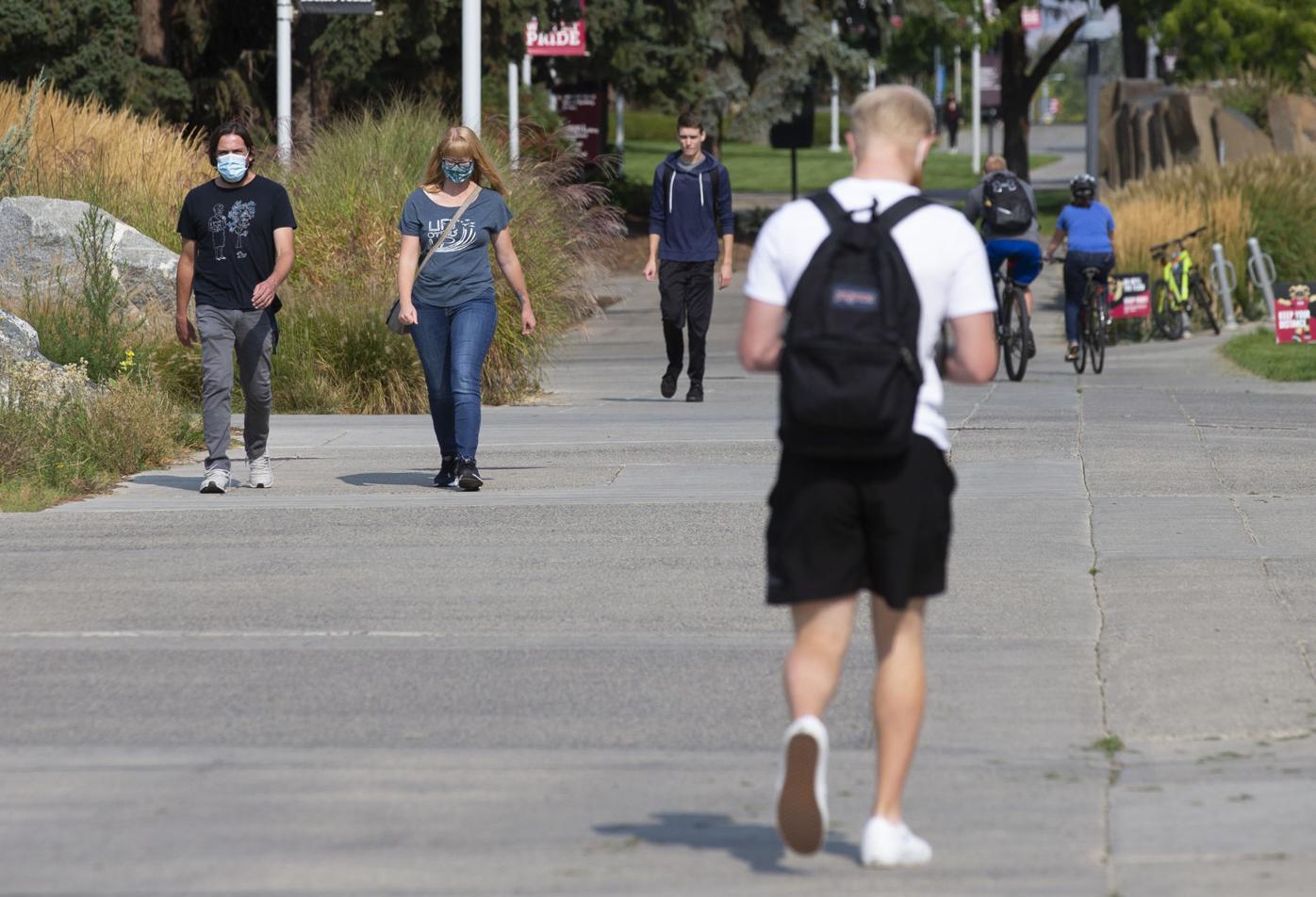 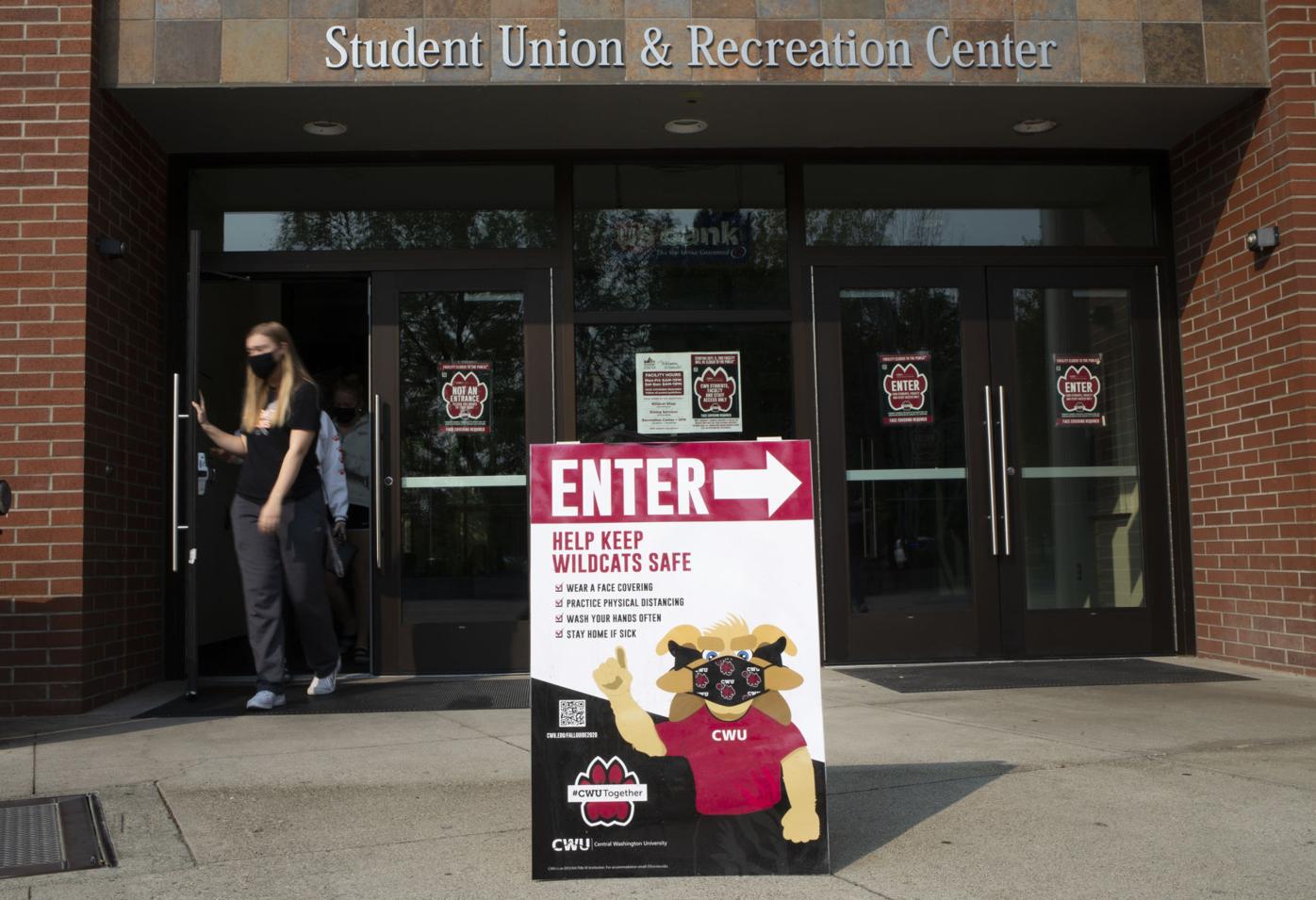 People come and go from the Student Union and Recreation Center at Central Washington University on Thursday, Oct. 1, 2020 in Ellensburg, Wash. 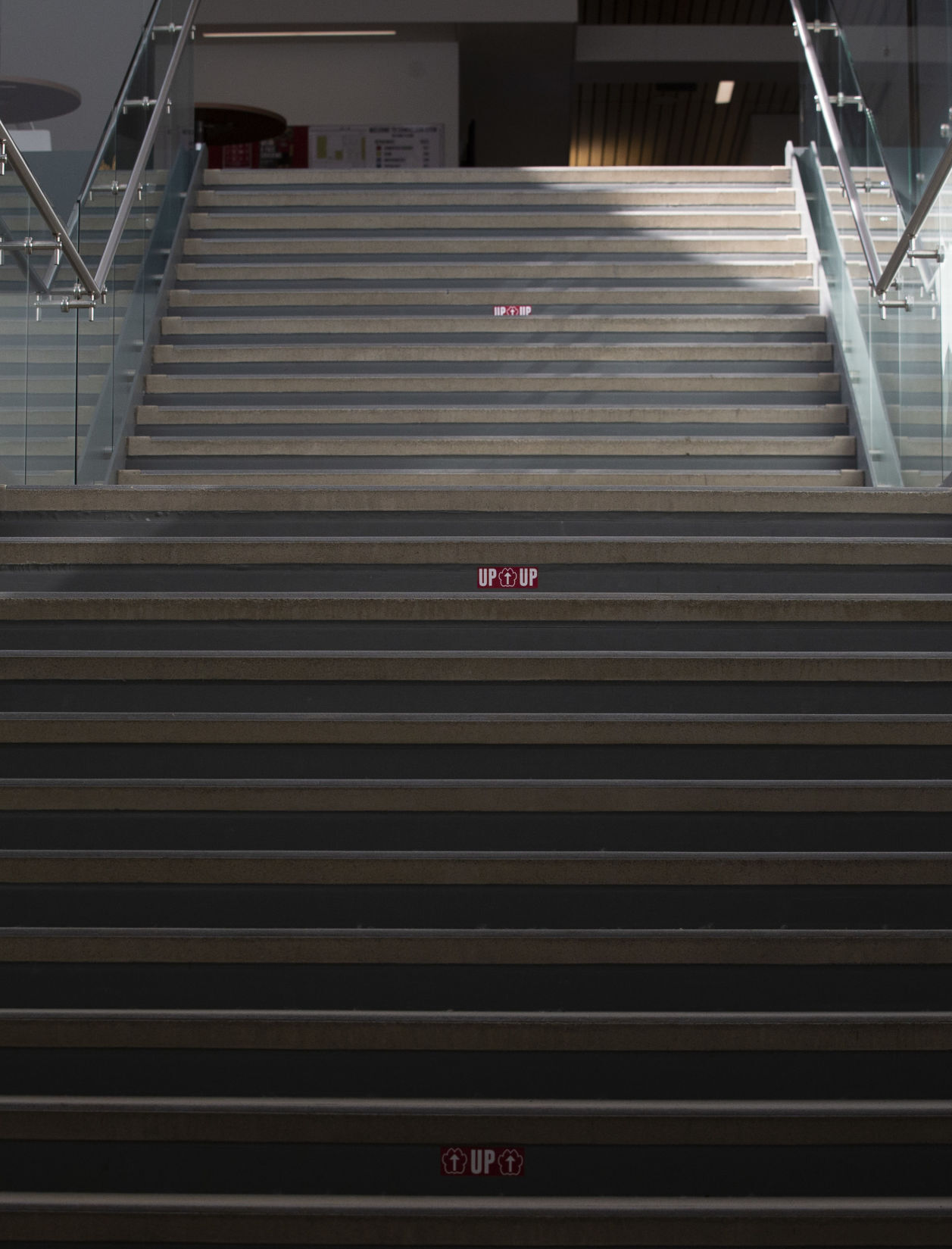 A staircase labeled "up" is pictured in Samuelson Hall at Central Washington University on Thursday, Oct. 1, 2020 in Ellensburg, Wash. The university has made specific staircases for traveling up and down between floors to keep students socially distanced.

Chairs in a lecture hall are closed off with tape to keep students separate at Central Washington University in Samuelson Hall on Thursday, Oct. 1, 2020 in Ellensburg, Wash.

People come and go from the Student Union and Recreation Center at Central Washington University on Thursday, Oct. 1, 2020 in Ellensburg, Wash.

A staircase labeled "up" is pictured in Samuelson Hall at Central Washington University on Thursday, Oct. 1, 2020 in Ellensburg, Wash. The university has made specific staircases for traveling up and down between floors to keep students socially distanced.

Two-thirds of the way into fall term, Central Washington University has avoided making any sudden changes to its approach to learning for the quarter.

Classes have carried on uninterrupted.

But assessments and minor adjustments are happening all the time, as new information about COVID-19 or campus transmission is made available. A key part of that: providing support for students who contract the virus, and working to reduce additional risk.

This is being discussed daily — especially as university leaders look to the start of winter term.

Early in the year, university administrators began discussing how the virus could impact each department of the school, said James Jankowski, who oversaw COVID-19 planning for the fall.

By midsummer, the university reduced on-campus housing for the fall, creating single-student occupancy in dorms. This cut the number of students living on campus from about 4,000 to 1,600. Just 25% of courses were to have an in-person component, further reducing people on campus.

The university started the fall term early so it could wrap things up by Thanksgiving to reduce virus exposure, Jankowski said. The end of the fall quarter is usually in early December. This year it is Nov. 20.

“So far, overall it has been positive,” Jankowski said of fall term. “By and large, employees and students have been following protocols.”

Still, the university has seen cases of COVID-19 among students.

As of Monday, 124 students at CWU had tested positive for the virus in September and October, out of 250 cases community-wide, according to Kittitas County Public Health’s health officer Dr. Mark Larson.

As of Friday morning, the university reported 45 current cases and a total of 163 infected students since Sept. 9, when fall term began.

“Any increase is cause for concern. One case is too many,” Jankowski said. But, he added, the university has been able to manage a slow uptick in cases.

Recently, there was an uptick in confirmed cases among students living in the Wendell Hall residence on campus. After consulting with the health district, the university rolled out testing across the building and asked students to quarantine — something Jankowski said was an example of preventive measures on campus.

But he said the majority of CWU student cases have been contracted off-campus — either among students living elsewhere or students leaving campus. He said there is a need to better communicate the need to comply with public health guidance among off-campus students.

Jankowski added that the CWU community is intertwined with Ellensburg, meaning each needs to support the other. He said community members can help by modeling good behavior for students, like avoiding large gatherings and wearing masks.

When students do contract the virus, contact tracing is done by the health district, and the university provides support to students, he said.

The university has 36 quarantine rooms available to students who have been exposed to the virus and can’t fully isolate in their own dorm or off-campus housing.

On Tuesday, Gov. Jay Inslee issued a proclamation requiring universities to provide quarantine settings for students. It also set new regulations for sororities and fraternities, and other congregate housing. CWU does not have Greek houses.

Jankowski said while the university has a solid number of quarantine rooms available, this could shift easily if there was an outbreak or more students expressed a need to use one.

He said the rooms also make it easier for CWU to help students with meals and mental health support.

Jankowski said the pandemic is mentally trying for everyone. But it can be especially challenging for a student who is living away from home for the first time, he said, making mental health help important.

With winter break fast approaching at CWU, Jankowski said daily meetings with the university president and Larson of the health district continue. One of the questions on the table is how to ensure student and staff are safe when people return in January after a five- to six-week break.

The new term will also come alongside flu season, colder weather and shorter windows of daylight that could further stress “pandemic fatigue,” Jankowski said. In light of that, the university is discussing how to focus more on student mental health and form better connections with students, even amid reduced in-person learning.

He said if rates do worsen, the university could be forced to close down campus as it did in the spring under a statewide mandate to shutter schools. But he said there are a series of metrics to watch to determine that, rather than one simple threshold. What he does know, he said, is that nobody wants to see that happen. It would impact students’ education as well as the economy they help drive in Ellensburg, he said. So the university is working hard to prevent that fate — as well as future COVID-19 cases.

“Overall, we’re in a good place. But at the same time, we know things could turn on a dime,” he said. “There’s no playbook for how to open a university during a pandemic.”