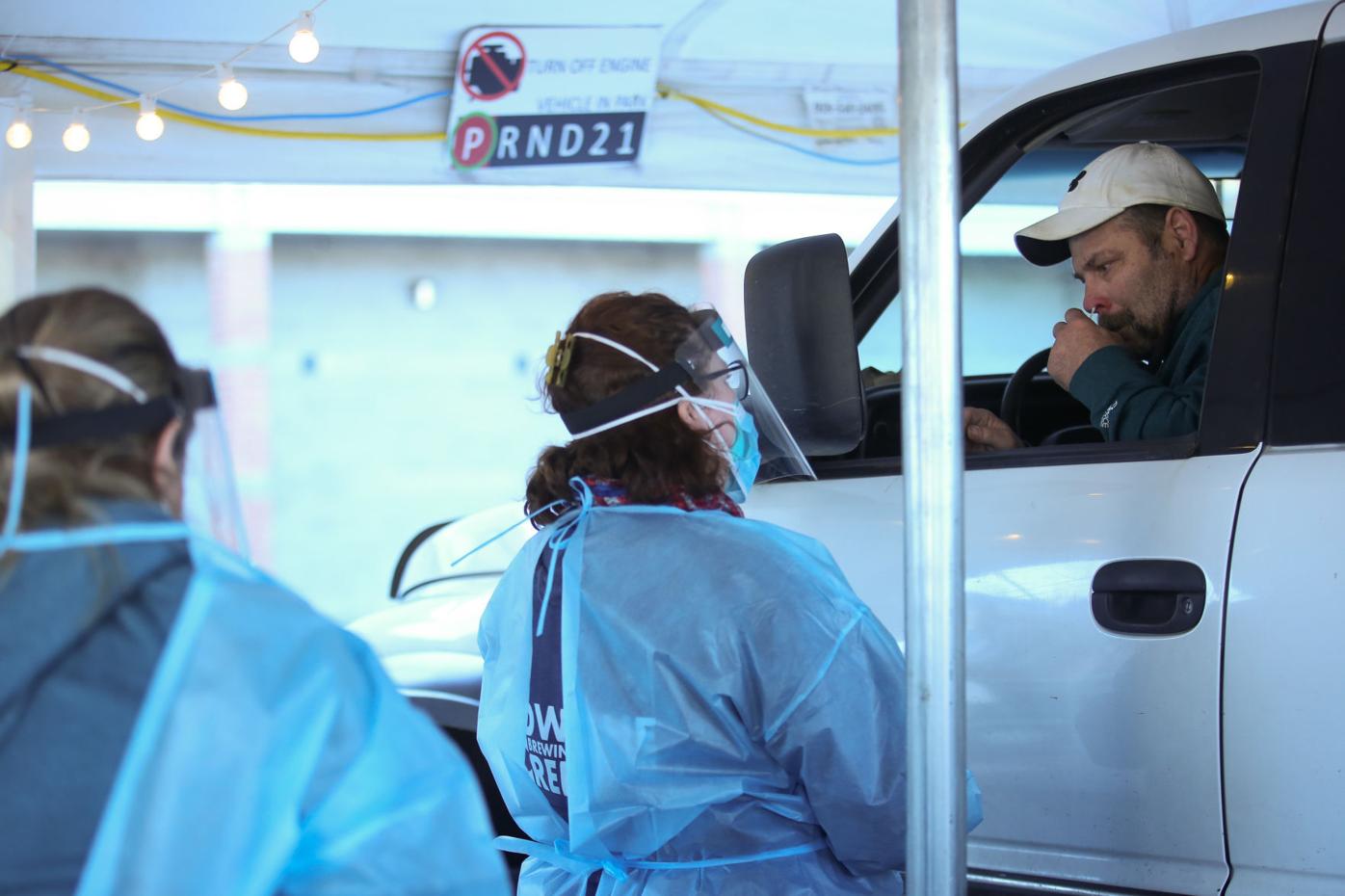 William Lennartz, right, uses a nasal swab for a self-administered test at a COVID-19 community testing site Wednesday, Dec. 2, 2020, in the parking lot of State Fair Park in Yakima, Wash. 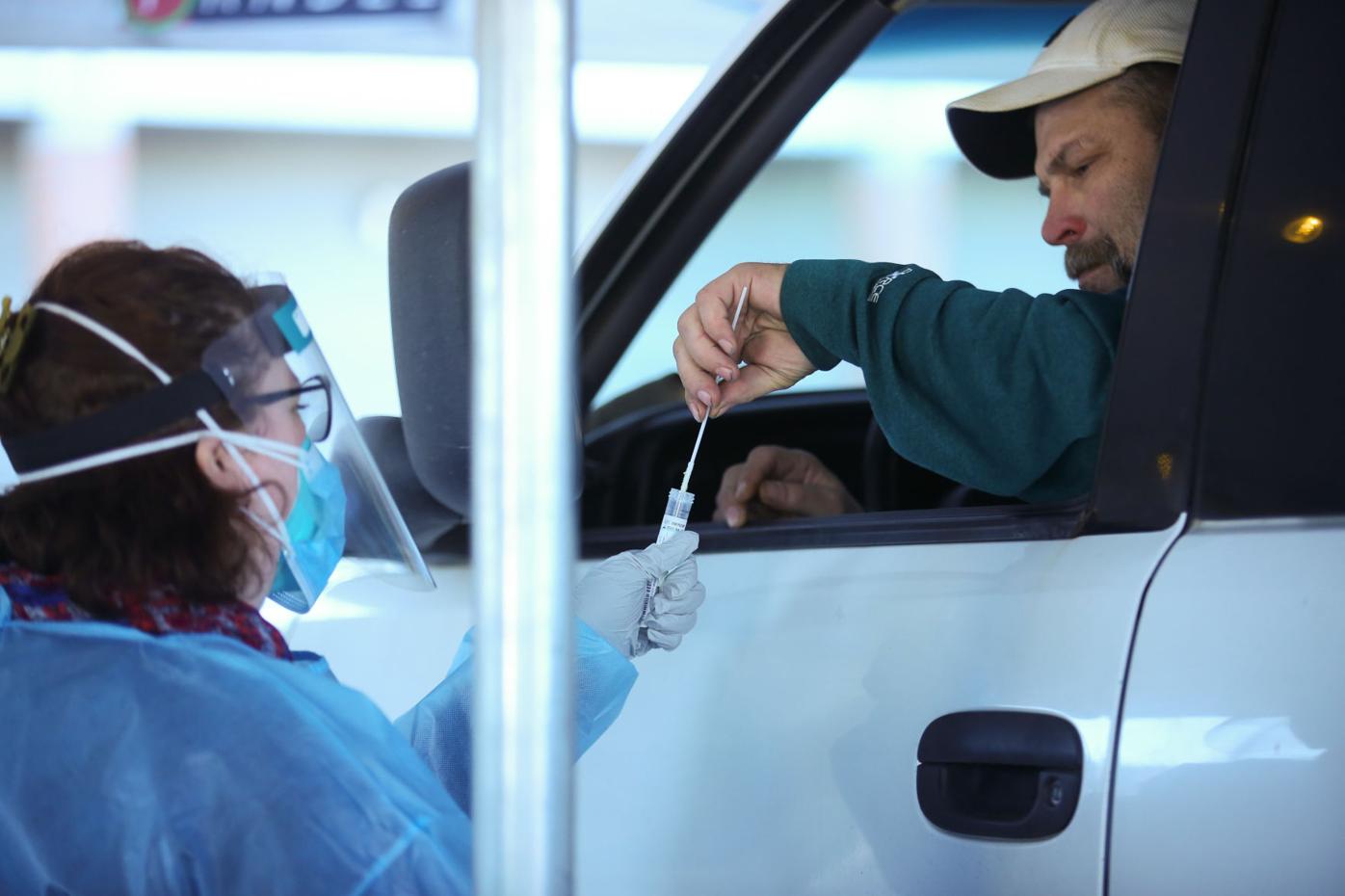 William Lennartz, right, places a nasal swab in a container after completing a self-administered test at a COVID-19 community testing site Wednesday, Dec. 2, 2020, in the parking lot of State Fair Park in Yakima, Wash. 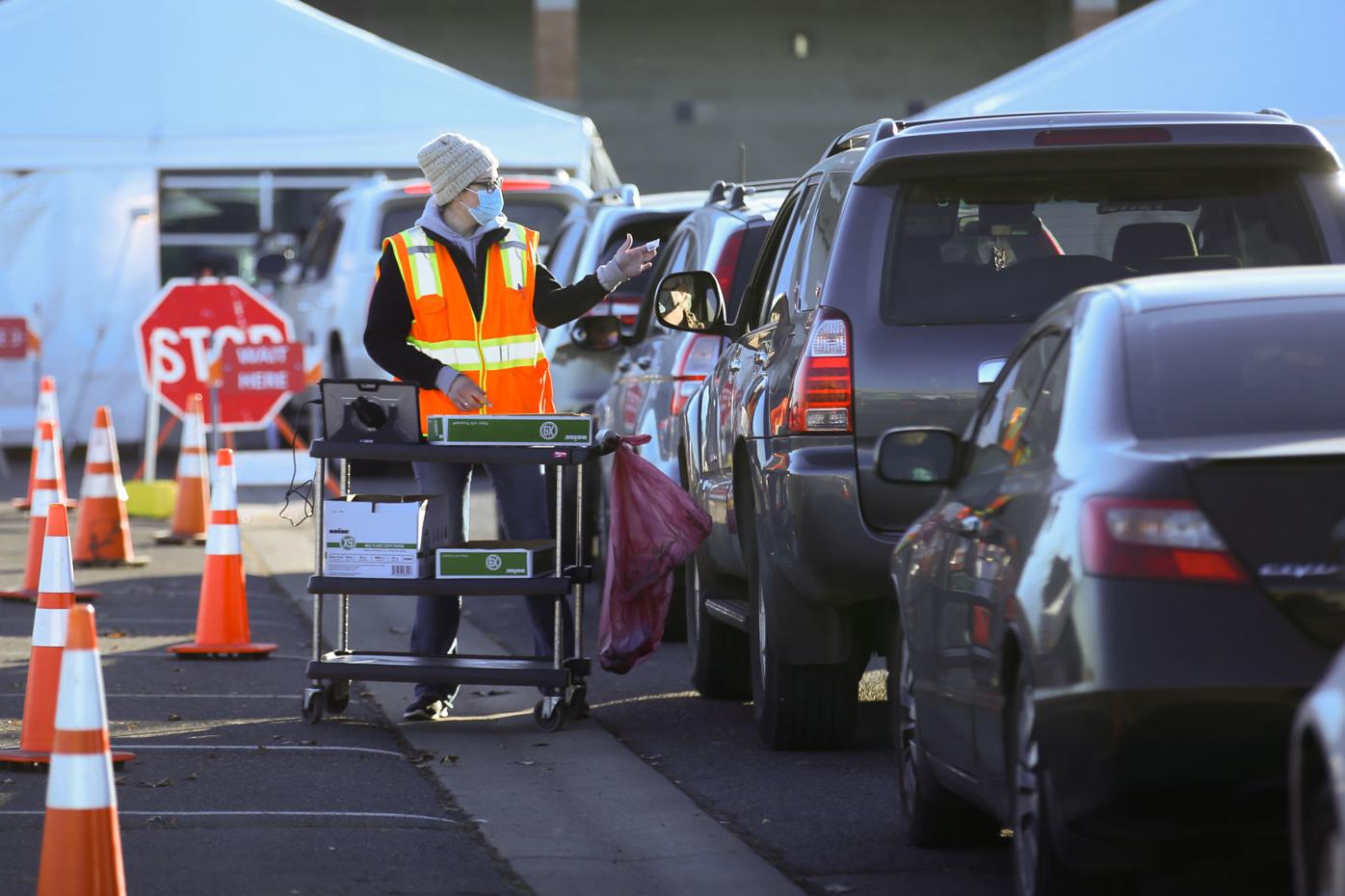 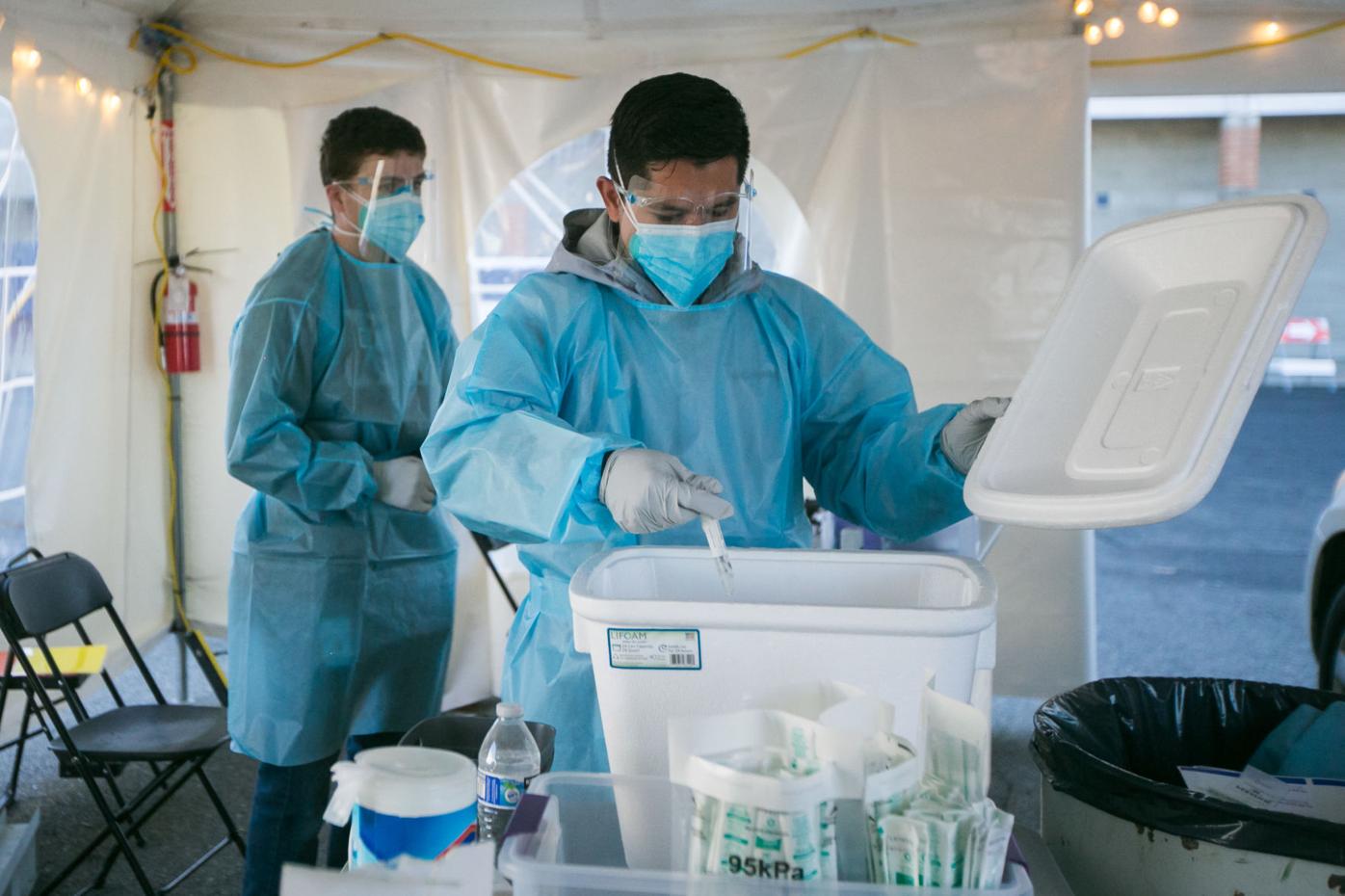 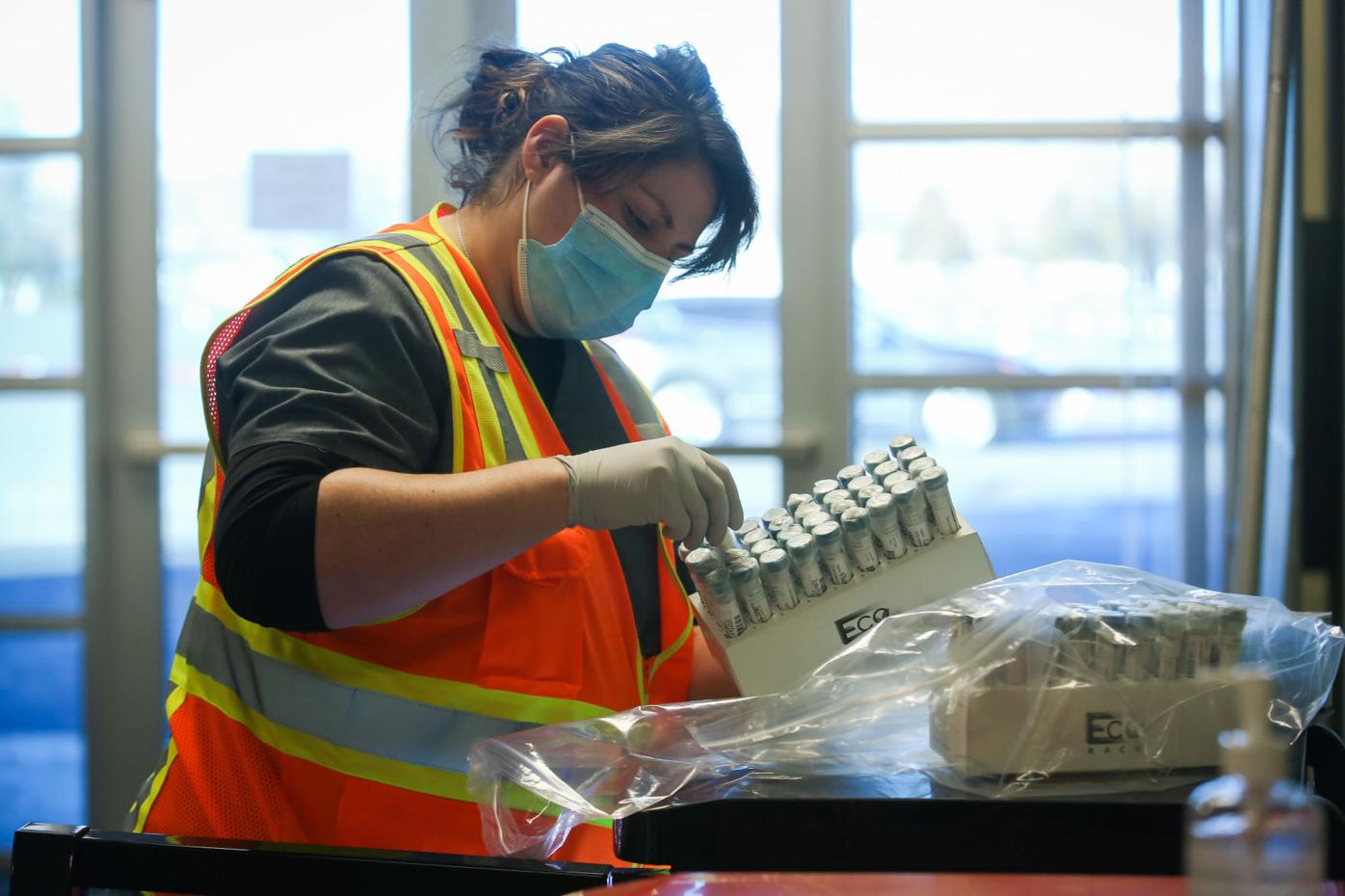 William Lennartz, right, uses a nasal swab for a self-administered test at a COVID-19 community testing site Wednesday, Dec. 2, 2020, in the parking lot of State Fair Park in Yakima, Wash.

William Lennartz, right, places a nasal swab in a container after completing a self-administered test at a COVID-19 community testing site Wednesday, Dec. 2, 2020, in the parking lot of State Fair Park in Yakima, Wash.

In announcing a new COVID-19 drive-through testing site at State Fair Park in October, health officials said it was designed to test up to 500 people a day.

It hasn’t reached its daily capacity yet, a Yakima Health District staff member said during the board of health meeting Wednesday. But it’s getting closer.

“Just yesterday, they hit 437 tests a day. ... We definitely are seeing a need from the community for that resource,” Johnson said.

That testing site will be open through the end of the year. The health district is also opening a second community-based testing site in Sunnyside at 9 a.m. Sunday. The site at the Sunnyside Community Center, 1521 S. First St., will offer drive-through, self-administered nasal swab testing to residents with and without health insurance coverage.

It will be open 9 a.m. to 3 p.m. Sunday through Thursday each day but Tuesday. Hours for testing on Tuesday are noon to 6 p.m. The health district is opening the new Lower Valley testing site in partnership with the city of Sunnyside, Comprehensive Healthcare and Astria Health.

“This is all free of charge. ... This is a pretty big deal because we’ve been trying from day one to ensure and master the low-barrier and equitable testing in our Valley,” he added. Officials have stressed it’s crucial all Yakima County residents have access to free, low-barrier testing.

“I’m extremely delighted to hear that you got those testing sites going and you’re getting that volume,” health board member Dr. Kay Funk said.

Testing for COVID-19 is increasing throughout the state. Some sites in Seattle saw unexpectedly high turnouts before Thanksgiving, and interim county health officer Dr. Larry Jecha said test results are lagging, with some taking as long as seven to nine days.

Some of the COVID-19 statistics are alarming, Jecha said, as Yakima County is in a second wave of the coronavirus pandemic.

Nine people were hospitalized in Yakima County because of COVID-19 at the last meeting on Oct. 28, said Melissa Sixberry, director of disease control for the health district. That number rose to 32 on Wednesday, prompting concern about hospital staffing challenges and ICU capacity.

“We need the whole community to be with us. My concern is the Thanksgiving fallout. I’m afraid those numbers are going to continue up. It’s going to be the next 10 days (that) we’re going to see the fallout,” Jecha said.

Members will meet later this month to discuss Jecha’s contract. They declined to take action Wednesday on a contract as they hadn’t seen one yet.

The county is proposing to pay Jecha a monthly stipend for his services, rather than by the hour.

“I’m not comfortable with approving something that’s not been read,” said Yakima County Commissioner Amanda McKinney. Fellow Commissioner LaDon Linde agreed on tabling the issue for another meeting in December. They didn’t set a date Wednesday, but board president Gail Weaver said she would keep in contact in scheduling one and setting the agenda.

“The situation is severe. We have many, many numbers of positive cases each day. This is a very serious situation,” Fresco said.

“The spread of COVID is far more dramatic than we originally anticipated. It means that more people may have been asymptomatic or had an illness they attributed to the common cold,” he said.

If people become complacent, “we could have an explosion,” Fresco added.

Indigenous woman missing from Tulalip Reservation, FBI offering up to $10,000 for information