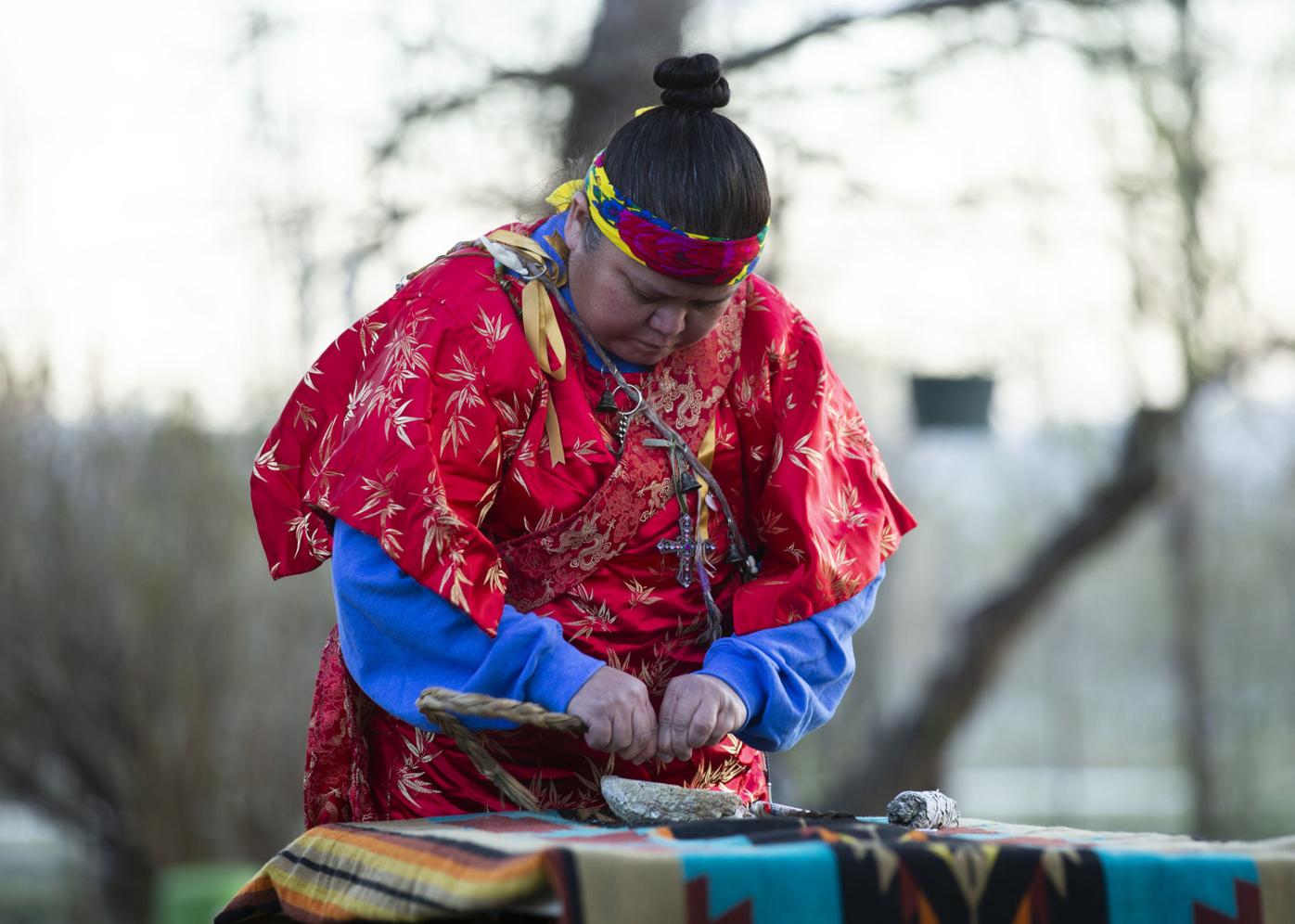 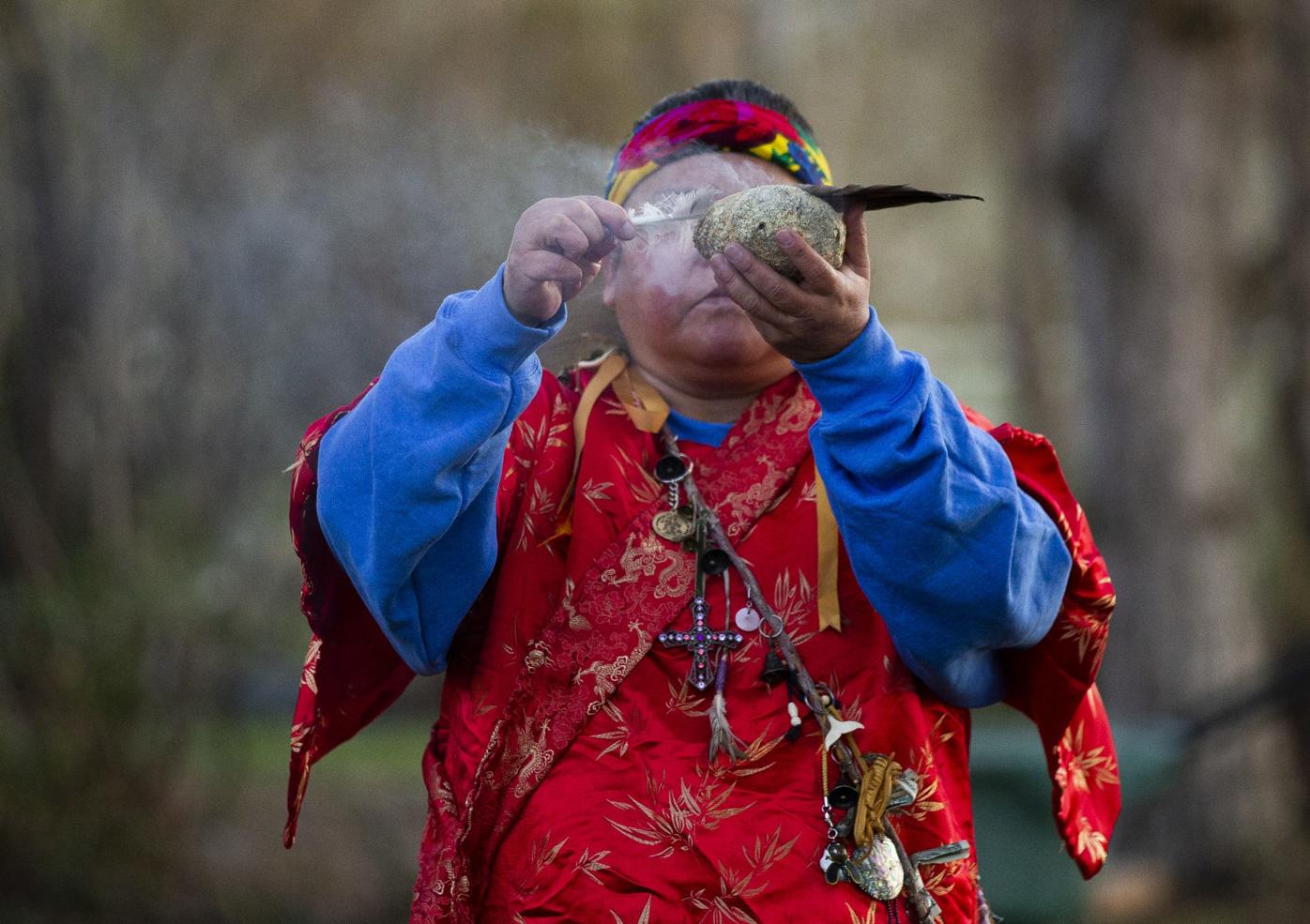 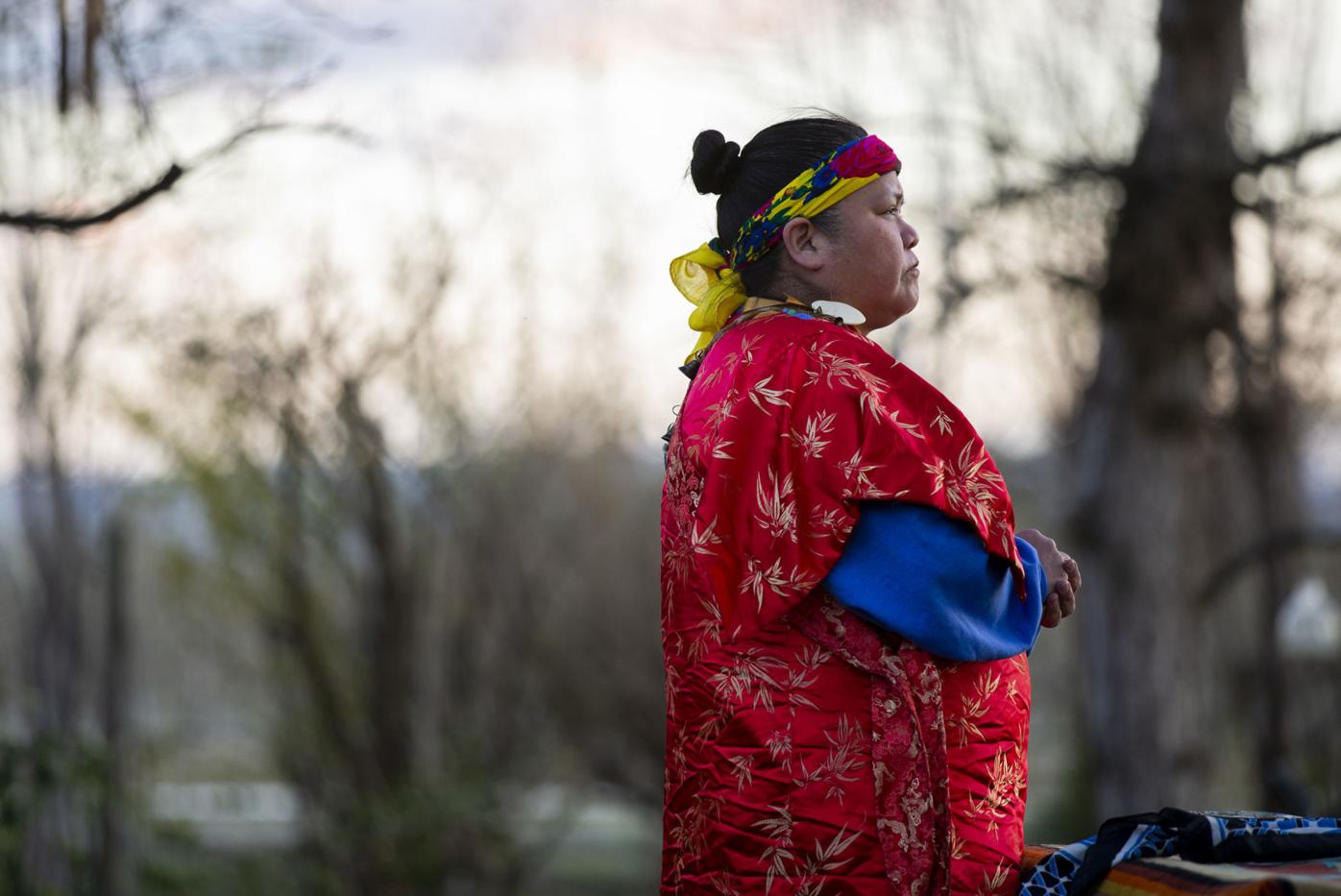 HollyAnna CougarTracks Decoteau LittleBull waits for sunset to begin praying in her parents' backyard on Friday, April 3, 2020, in Wapato, Wash. 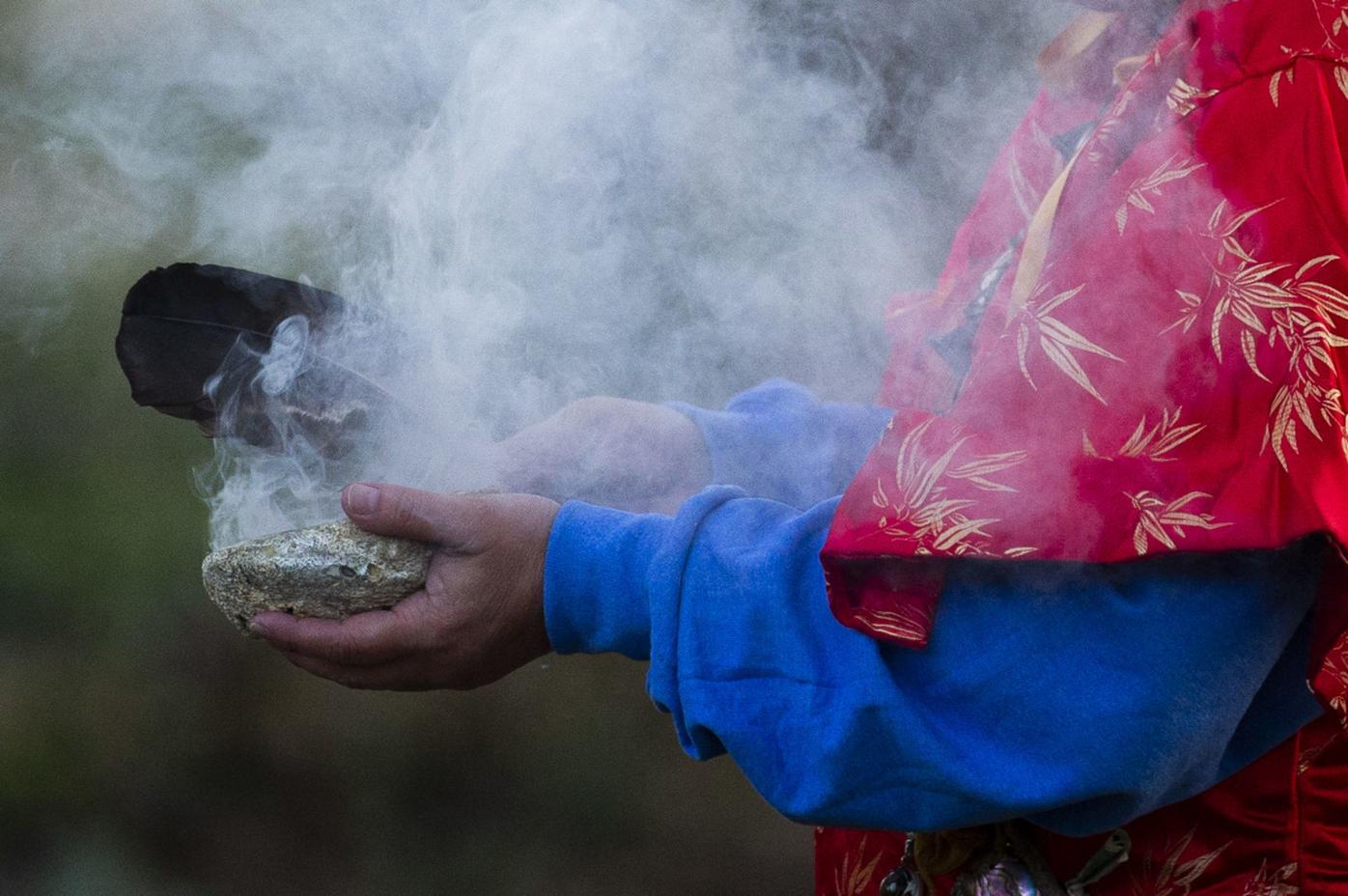 HollyAnna CougarTracks Decoteau LittleBull waits for sunset to begin praying in her parents' backyard on Friday, April 3, 2020, in Wapato, Wash.

She had spent the night before in prayer and fasting — an individual ceremony she planned to continue through Sunday morning.

LittleBull leads ceremonies for tribal members at least four times a year, which often involve people fasting within earshot of each other so they can hear each others’ prayers and songs. But with the coronavirus outbreak, social gatherings are no longer permitted.

While the Yakama Nation is sovereign, and thus able to set its own rules and guidelines, the Nation’s Tribal Executive Committee has taken precautions similar to those ordered March 23 by Gov. Jay Inslee.

On March 23, the Yakama Nation Tribal Council Executive Committee issued a “Stay Home, Stay Healthy” order for local Indian Country. On March 25, the executive committee followed up with a public safety order, asking for the delay or suspension of all ceremonies to further minimize the spread of the novel coronavirus.

For several local indigenous people, raised traditionally to turn to communal prayer in times of illness or upheaval, the order came as a shock. In the Yakama Nation, as well as within other tribes nationwide, there’s a growing tension between those who believe ceremonies are more powerful than the pandemic — and want to continue their traditional ways — and tribal members concerned that continued requests for the ceremonies could endanger the lives of the elders being asked to run them and who may feel an obligation to do so regardless of possible consequences to their health.

He also said it’s been hard.

“I sing and pray every night for our people,” he said. “But I also want to go back to church, back to singing and praying with other people.”

LittleBull has turned to one of the many historical strengths of indigenous people: adaptation.

During breaks in her hours-long sessions with her traditional regalia, pipe, and prayer songs, she’s checking her cellphone and updating those fasting with her. LittleBull, who has had friends and family asking for prayers and ceremonies, invited them along.

“I have had a very difficult time telling people I can’t do this in person,” she said. “I am still respecting the tradition and the culture. I’m just changing the way I perform the ceremony. It’s the only way I know to help my friends and family at this time.”

The situation in Indian Country

The Yakama Nation declared a state of emergency March 13 in response to the coronavirus outbreak and followed up with the March 23 stay-at-home order.

“Now is the time for dramatic action to protect our communities from this coronavirus,” said Delano Saluskin, the Yakama Nation Tribal Council Chairman, in a videotaped address. “This order carries the weight of Yakama law, and must be followed by all Yakama Reservation and off-Reservation trust allotment residents, regardless of whether you are Indian or non-Indian.”

The order requires all residents to stay in their homes until further notice, except when going out for essentials like food, gas or medical services. Tribal members also are able to go hunting, fishing and food gathering for subsistence purposes and for home ceremonial use that complies with existing Yakama tribal hunting and fishing treaty rights.

Then, on March 25, the tribe issued the public safety order encouraging religious leaders to delay spiritual gatherings and religious ceremonies in all churches and longhouses on reservation and trust allotments.

Funerals are still allowed under the order, which says the services should be limited to immediate family members and social distancing guidelines should be followed.

There are 573 federally-recognized tribes in the United States, and even more tribes that are state-recognized or seeking official recognition. Each has different customs, traditions, and prayers. But some impacts cross tribal lines.

Nationwide, Native American people are at much higher risk for diabetes, heart disease, and high blood pressure, according to the Indian Health Service. Many also don’t have access to the needed resources for sanitation and social distancing recommended by state and national health leaders. According to the National Institute of Health, 13 % of American Indian and Alaskan natives lack safe water and 16% of households are overcrowded, often due to multiple generations living within the same home.

In light of those statistics, tribal-related, coronavirus-inspired messages have surfaced and are being shared by many tribal members nationally on social media platforms, including Facebook and Instagram.

“Stop spreading the idea that traditional ceremonies will protect us against COVID-19,” a message shared by several tribal members said. “They’re good for certain things, especially those from our homelands, but we’re still human and this came from far away. We were vulnerable to smallpox, and we’re vulnerable to this.”

“Stop asking for ceremonies,” another post encouraged. “You’re endangering everyone who attends, including the one who runs it and who can’t always say no due to their obligations or roles.”

Saluskin, the Yakama Nation tribal chairman, noted in addresses March 18 and March 20 that the tribe’s elders were among those at risk of the virus.

“Elders are the most vulnerable to COVID-19, especially those with chronic medical conditions such as heart disease, diabetes or lung disease,” he said. “We must make sacrifices to protect our loved ones from this health crisis.”

For community-oriented and traditionally-raised tribal members like Dick, the coronavirus has created a painful pull in different directions.

As an elder, Dick said he wants to share the knowledge he’s learned from others. Prior to the pandemic, he regularly spoke with Native youth who in turn picked up wisdom of the tribe’s traditional ways.

“I want to share what I learned from the elders. That’s my job,” he said. “I hated to stop ceremonies, but I didn’t want to be subordinate with the tribal chairman.”

Dick said longhouses have seen increased numbers of people showing up for prayer, given the panic and uncertainty of the pandemic. He’s also heard from people who believe that temperatures reached in sweat lodge ceremonies can kill the virus. Still, recent funerals on the reservation — at least five in the last two weeks — have underscored that elders are not immune from death, he said.

“There are quite a few who still want to do ceremonies. That’s how they’ve been taught, same as me,” he said. “But I have seen the posts about tribes and smallpox, and that’s made me think maybe it could help if we do stay away.”

Dick said he’s been using his radio show to share information about the coronavirus, as well as to encourage healthy habits for people in isolation.

Inslee extended the state’s stay-at home order through May 4, but the tribal chairman hasn’t yet made a similar announcement.

“In the beginning, it was easier, because I didn’t think it was going to last this long,” he said. “Now, we might have another month of staying at home, and it’s going to be harder to stay sane psychologically. People aren’t used to that.”

Power in prayer, power in a people

LittleBull started her fast Thursday evening. She planned to continue through Sunday afternoon, alternating hours of prayer and song and offerings of tobacco with breaks to rest. She will be praying for both tribal and nontribal people, she said.

LittleBull, who also has trained as an emergency management planner specializing in pandemics, said in an interview prior to entering her prayer that she started watching out for the coronavirus as soon as she heard about cases in China.

“I am hypervigilant about pandemics,” she said. “I knew this was coming.”

LittleBull is a cancer survivor. She also has several autoimmune conditions. Her education about illnesses and her own risk level has conflicted with requests coming in for in-person prayer.

She made a difficult decision to not attend a sweat ceremony. She turned, instead, to a longstanding tradition in her family: fasting.

“My grandpa helped me with my first ceremony, when I was 16,” she said. “It’s something you can do by yourself, from sunrise to sunset. I’ve been getting a lot of calls for prayers, and I felt for my own personal and mental safety, I needed to do this.”

LittleBull also made the difficult decision to post about her intention to fast on Facebook and to invite others to fast, in their own homes, alongside her.

“There are several people who are joining me, who will be doing the ceremony from their own spaces at home,” she said. “I’m going to be telling them what song I will be singing, how long I will be praying, when I will be resting.”

LittleBull said she’s heard from tribal members who are grateful for the modified prayer option as a way to heal or deal with the difficulties and anxieties related to the coronavirus. She hopes the prayers will be as powerful as they would be if people gathered to pray in person.

Saluskin, in his March 18 announcement, also spoke to the tribe’s resilience as a people.

“We as Yakama people have overcome hardships and actions that have adversely affected our nation in the past,” he said. “We must stay strong and work together for our membership and those yet to come.”

The Yakama Nation has a coronavirus response team working with federal, state and local partners, as well as a COVID-19 hotline with a prerecorded message about the tribe’s updates. The number is 509-865-7272.

A timeline of tribal actions

Feb. 26: The Yakama Nation assigns staff to monitor and gather information on COVID-19

March 13: Yakama Nation declares a state of emergency to mobilize federal and state resources to combat the spread of coronavirus.

YAKAMA RESERVATION — The little girl stands on Toppenish Ridge, high above the Yakima Valley, before the camera pans closer to show her at a w…