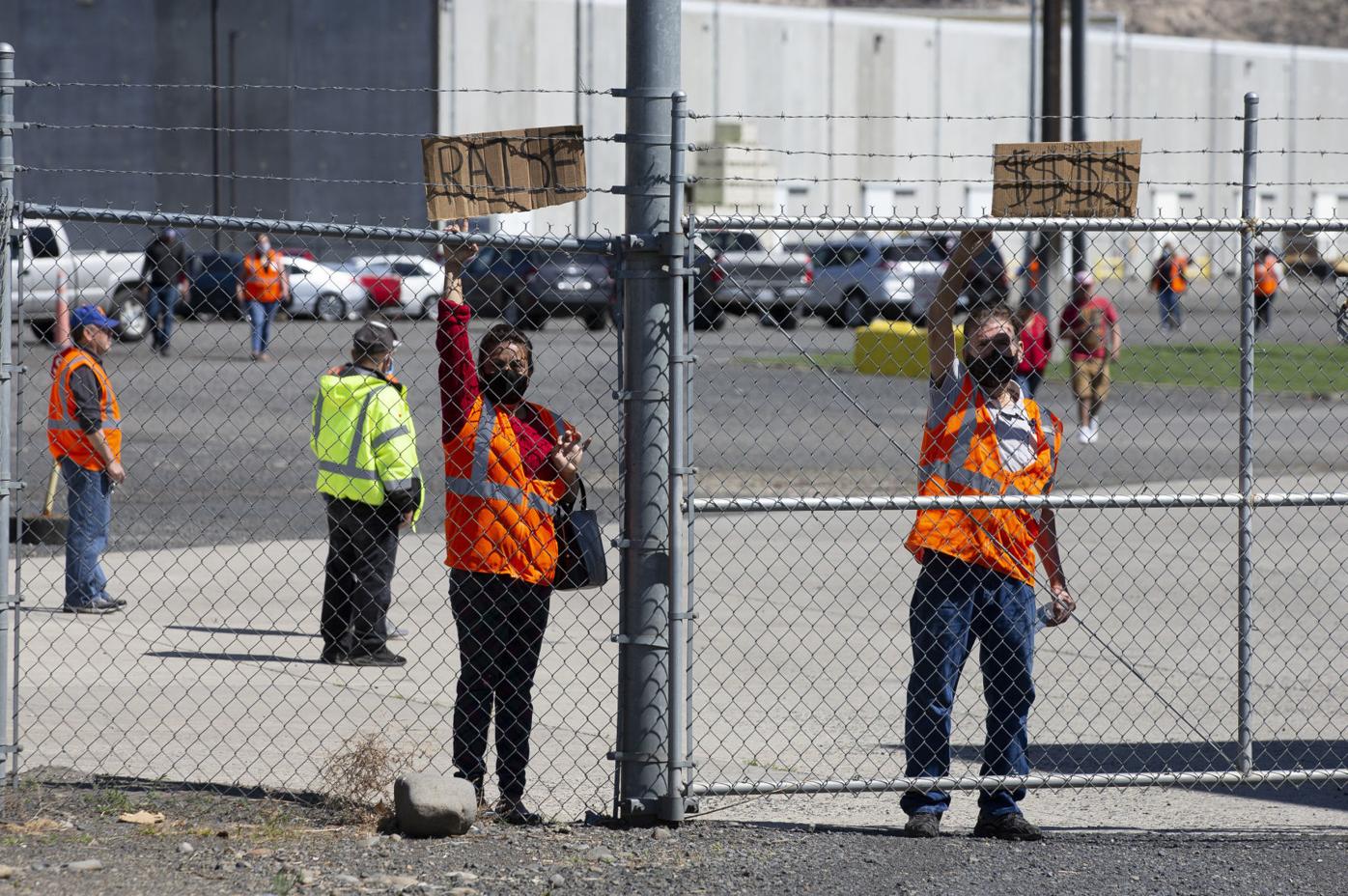 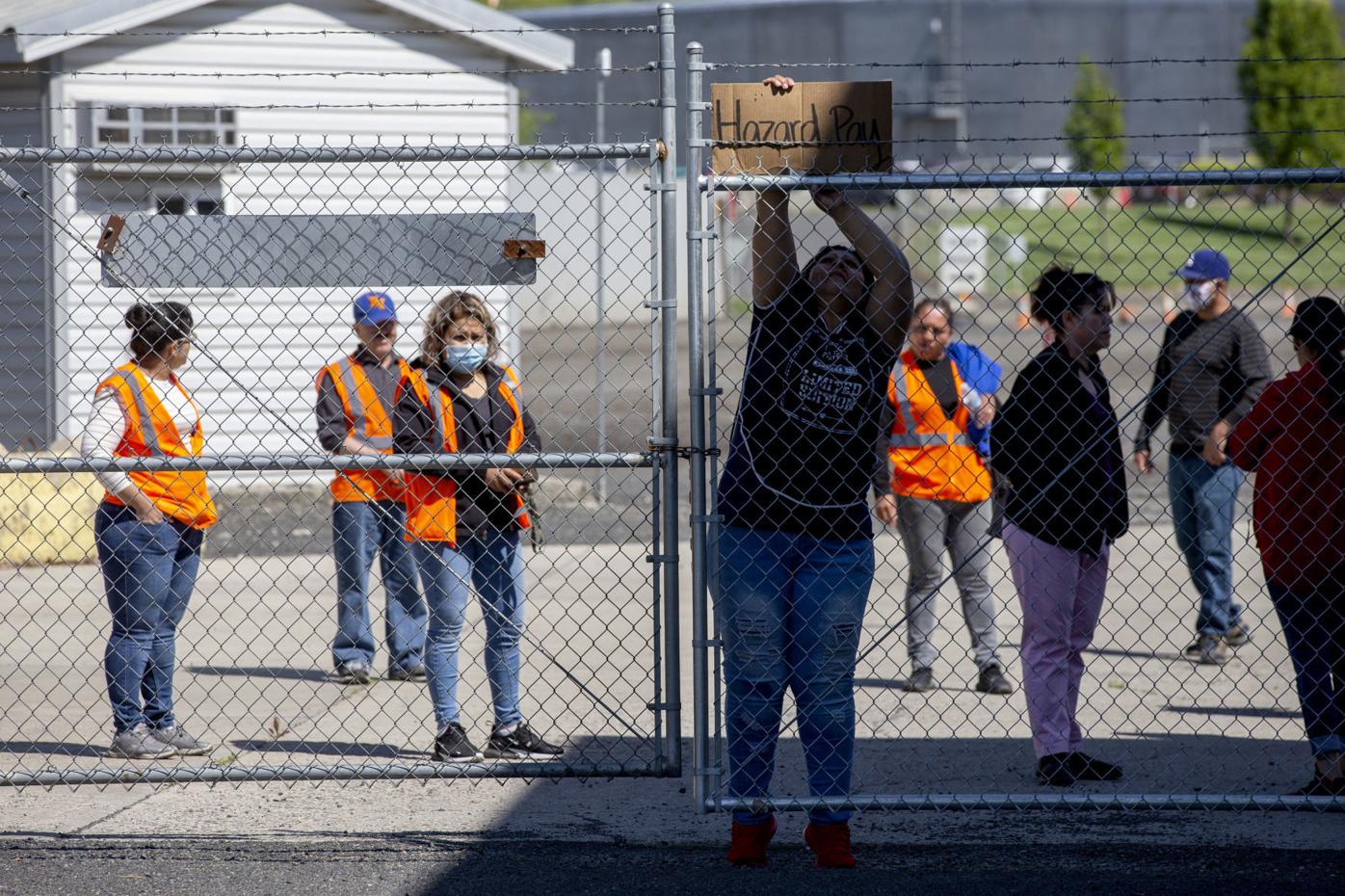 A worker puts a sign that says "hazard pay" in the barbed wire at the top of a fence during a strike at Allan Bros. Fruit on Thursday, May 7, 2020, in Naches, Wash. 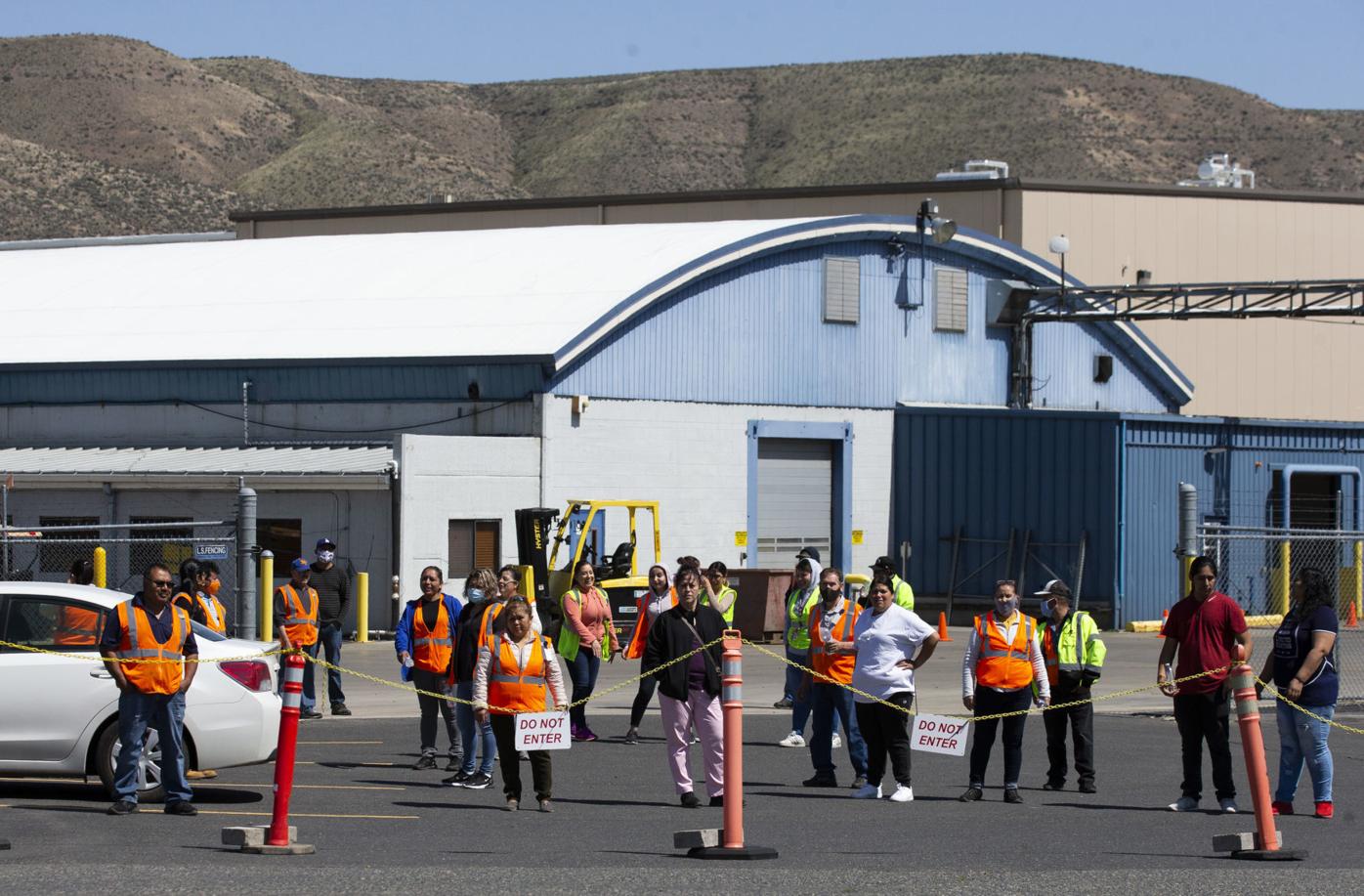 A worker puts a sign that says "hazard pay" in the barbed wire at the top of a fence during a strike at Allan Bros. Fruit on Thursday, May 7, 2020, in Naches, Wash.

More than 50 workers at Allan Bros. walked off the job Thursday, voicing concerns about the company’s response to the coronavirus.

Workers started protesting outside the fruit company’s plant in Naches at 8 a.m. Thursday. They say the company isn’t being transparent about COVID-19 cases and has been lax on safety measures, such as facility cleaning.

“They are not doing what they’re saying they’re doing,” said Jennifer Garton, 39, a quality control worker, during a phone interview from the protest.

Garton said the company has communicated with workers, but it has not been straightforward about employee exposure to the coronavirus. That has resulted in workers hearing about confirmed cases or other incidents via word-of-mouth rather than though direct company communications.

“We’re not feeling we’re being told everything we need to be informed of to protect ourselves and our families from the virus,” Garton said.

The workers are requesting hazard pay and paid time off without having to use personal time.

Allan Bros. did not return a phone call or email requesting comment.

Farmworker advocates have voiced concerns that not enough is being done to ensure that Washington agricultural companies are implementing social distancing and sanitation measures.

That led two unions, the United Farm Workers of America and Familias Unidas Por La Justicia AFL-CIO, to file a lawsuit against the state Department of Health and Labor and Industries in Skagit County Superior Court, demanding tougher rules and immediate oversight.

Agricultural officials maintain that they are working to comply with guidelines, including those outlined by L&I, and argue that the suit will only drive a wedge between companies and their employees. Others argue that additional regulations aren’t going to solve the problems the unions are raising.

More recently, farmworker advocates and agricultural officials voiced differences regarding efforts to establish social distancing rules in guest worker housing. Advocates say that proposed guidelines from the state do not call for enough separation among farmworkers.

Growers criticized the proposal for different reasons, arguing that a ban on bunk beds would cut housing capacity and require growers to find alternative housing, driving up costs.

There have been at least 240 confirmed COVID-19 cases in the agriculture and food production industries, according to the Yakima Health District figures.