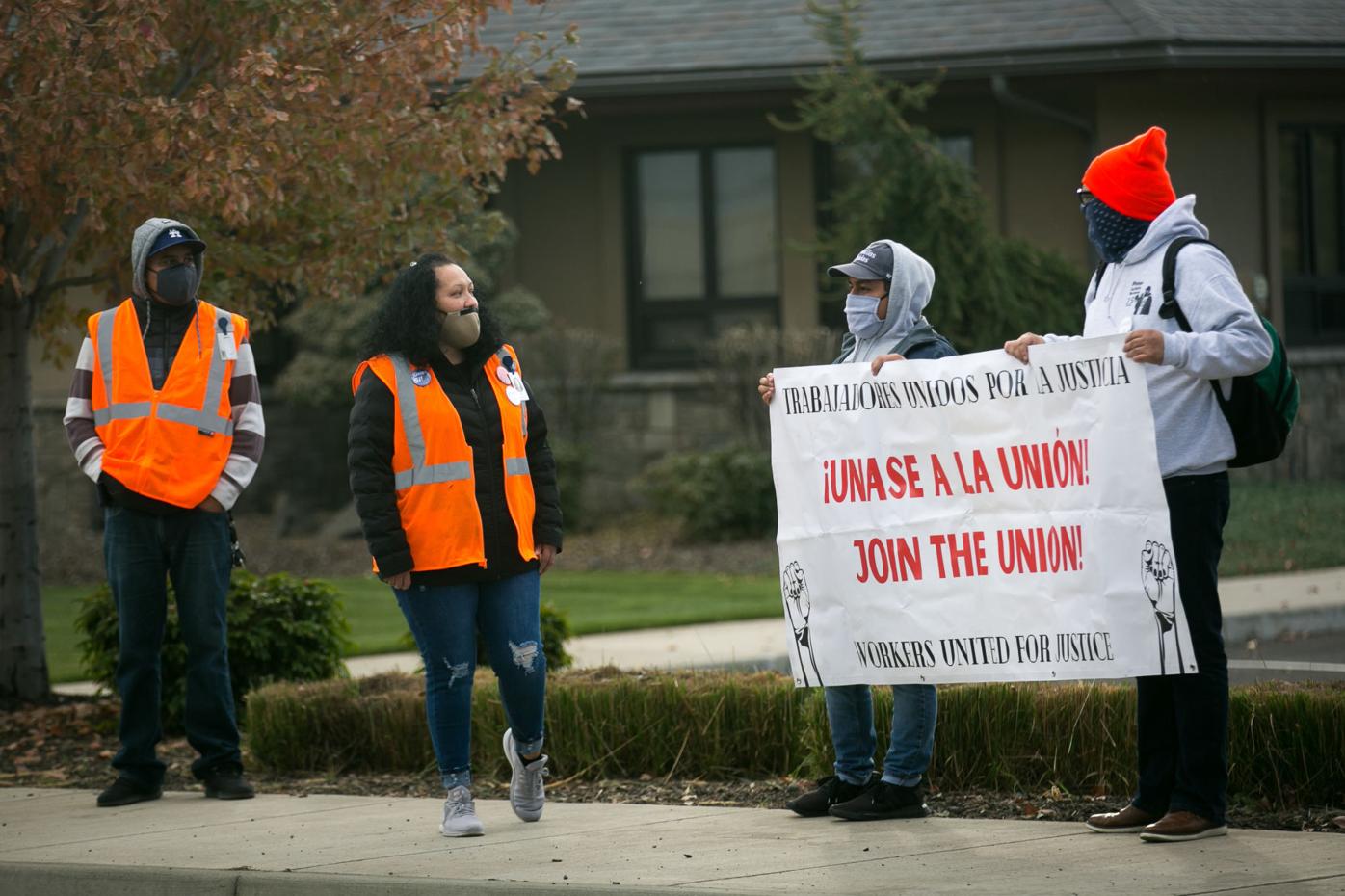 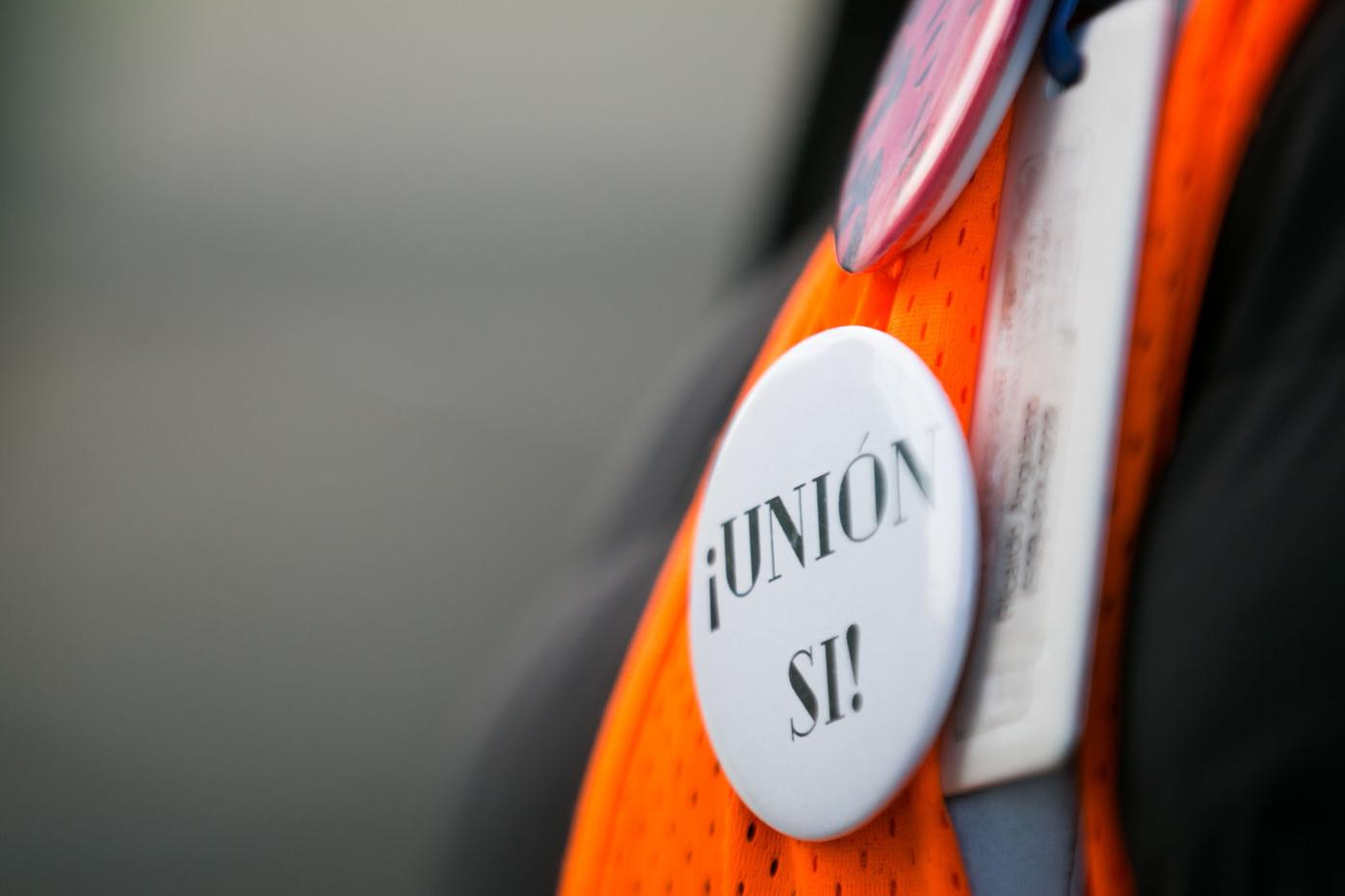 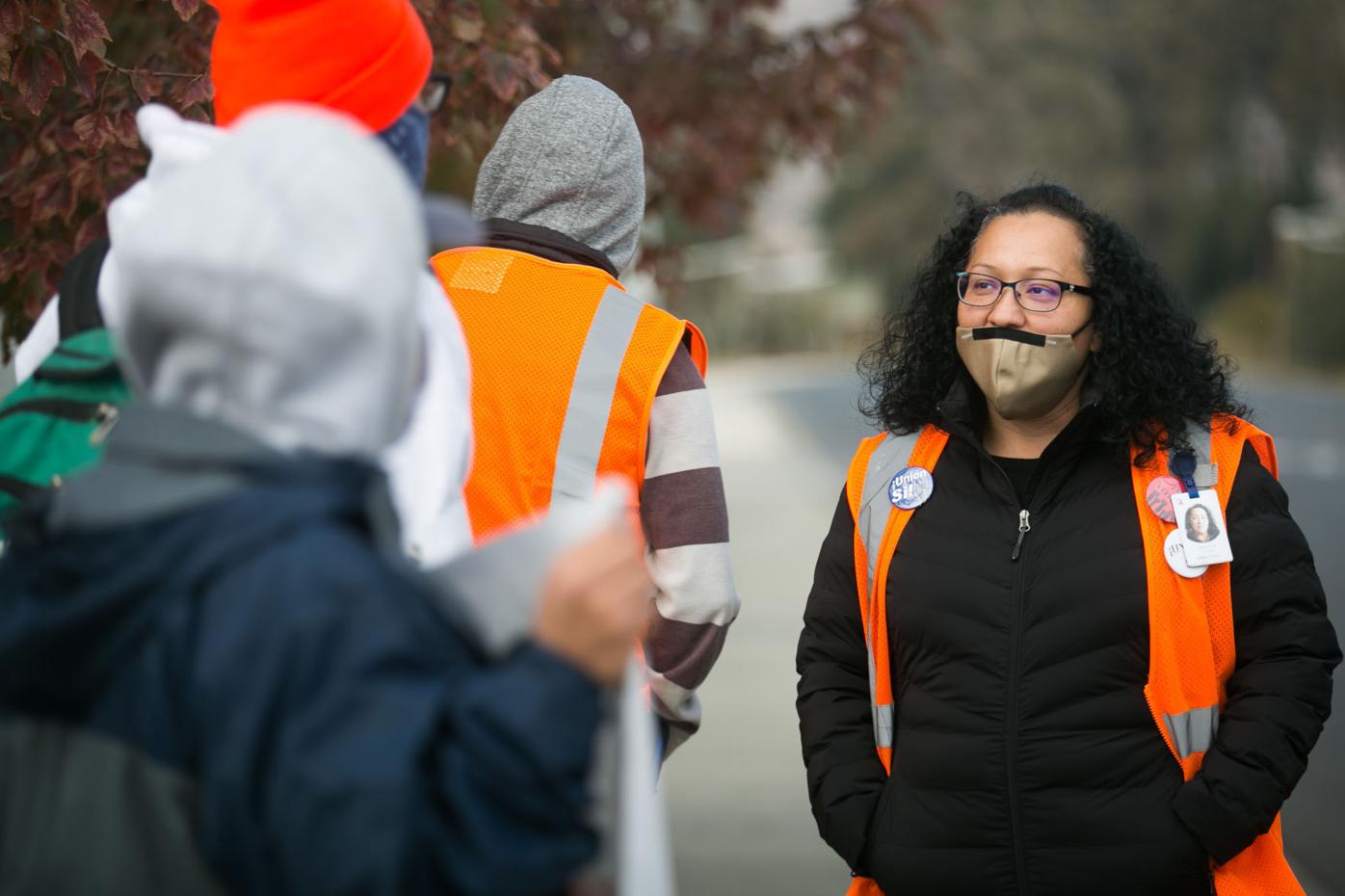 On a cloudy October day, a few workers gathered outside Allan Bros. to advocate again for themselves and their colleagues.

Workers at the Naches-based fruit company went on strike last spring over COVID-19 safety concerns, kicking off a series of protests and walkouts at fruit packing houses throughout the Yakima Valley. The strikes occurred as COVID-19 cases rose drastically, with a disproportionate effect on Latinos. They garnered statewide and national attention.

Striking workers raised concerns about a lack of masks and other protective equipment and a lack of communication and enforcement from supervisors about COVID-19 measures. They also pushed for hazard pay or wages for the risk they were taking on by working during the COVID-19 pandemic. Eventually, the strikes ended with workers reaching agreements with employers.

The October gathering outside Allan Bros. didn’t attract as many workers as the strikes. But the message was clear: Months later, Allan Bros. workers still want to be heard.

A group of Allan Bros. workers has mobilized over the last few months, this time to form a union called Trabajadores Unidos por la Justicia, or Workers United for Justice.

Allen Bros. worker Angelina Lara, 48, said the company responded to worker concerns about the COVID-19 pandemic and has been providing masks and face shields daily.

Ultimately, the protests last spring encouraged employees to speak out about other issues, including pay and working conditions.

While the company signed an agreement with the protesting workers that led to the end of the strike in late May, the deal is not legally binding, like a collective bargaining agreement.

“I feel if we had a union, they would have to talk to us,” Lara said.

A date for workers to vote on whether they want to unionize hasn’t been set because of ongoing legal challenges. One dispute, which the National Labor Relations Board heard last month, involves who should be involved in a unionization vote. Organizers said the aim was to focus on the packing line and other related departments. The company wanted all employees to vote, said Edgar Franks, political director for Familias Unidas por la Justicia.

Frank and other staff from the Burlington-based farmworkers union arrived shortly after Allan Bros. employees started their protest May 7. They never left, and continued to support Yakima Valley agricultural workers during the peak harvest months.

Allan Bros. workers initially looked into joining Familias Unidas, but Franks advised it was best for them to form an independent union for warehouse workers, Franks said.

Trabajadores Unidos por la Justicia recently filed an unfair labor practice complaint against Allan Bros., alleging that the company endorsed the circulation of an anti-union petition and discouraged workers involved in the unionization effort from coming on company property to provide information for co-workers.

“If they don’t try, they don’t know what could have been,” Franks said. “Here’s that opportunity.”

Jon DeVaney, executive director of the Washington State Tree Fruit Association, a Yakima-based trade association, said he could not speak specifically to efforts at Allan Bros., but said there were union organization efforts before the pandemic.

“Union organizing efforts are not new and were not caused by pandemic issues so much as they provided the organizers something to talk about,” he said.

While there were some victories, including pay raises, workers want employers to go beyond responding to the COVID-19 pandemic, Franks said. That includes ensuring better relations between workers and supervisors and continued protections from workplace hazards, including COVID-19.

“We want to see structural changes,” he said.

Franks said he’s stayed in regular contact with workers from the other five packing houses that staged protests this spring. Those workers are watching the Allan Bros. unionization efforts as they, too, decide what to do next.

“For us to have a sister independent union (in Yakima) would be huge,” he said. “This is where agriculture lives and breathes in this state. It has the potential to trigger a lot of campaigns.”

Lara, the Allan Bros. employee, said workers like herself have endured years of physical pain from working at the packing house. She feels her employer and other employers are long overdue to acknowledge employees’ work and sacrifices.

“I want to see my co-workers in a better environment,” she said.

In addition to helping workers to mobilize, Familias Unidas is also looking to expand its advocacy efforts at the state level.

Over the last few months, Familias Unidas has gained statewide prominence as it advocated for better protections for agricultural workers. The union filed suit against state agencies twice this year over rulemaking.

Franks, the union’s political director, said the group will continue to advocate for agricultural workers, not just those in the union, long after the end of the COVID-19 pandemic.

Previously, the union thought it was best to focus on its workers but, over time, saw the need to advocate for all workers, whether they are unionized or not, Franks said.

That means advocating for them in Olympia and collaborating with other like-minded organizations and unions.

“We want to see the possibilities through policies,” Franks said. “What can we do to better the lives of farmworkers through legislation?”

An outbreak of new COVID-19 cases hit both of Apple King’s packinghouses this summer.