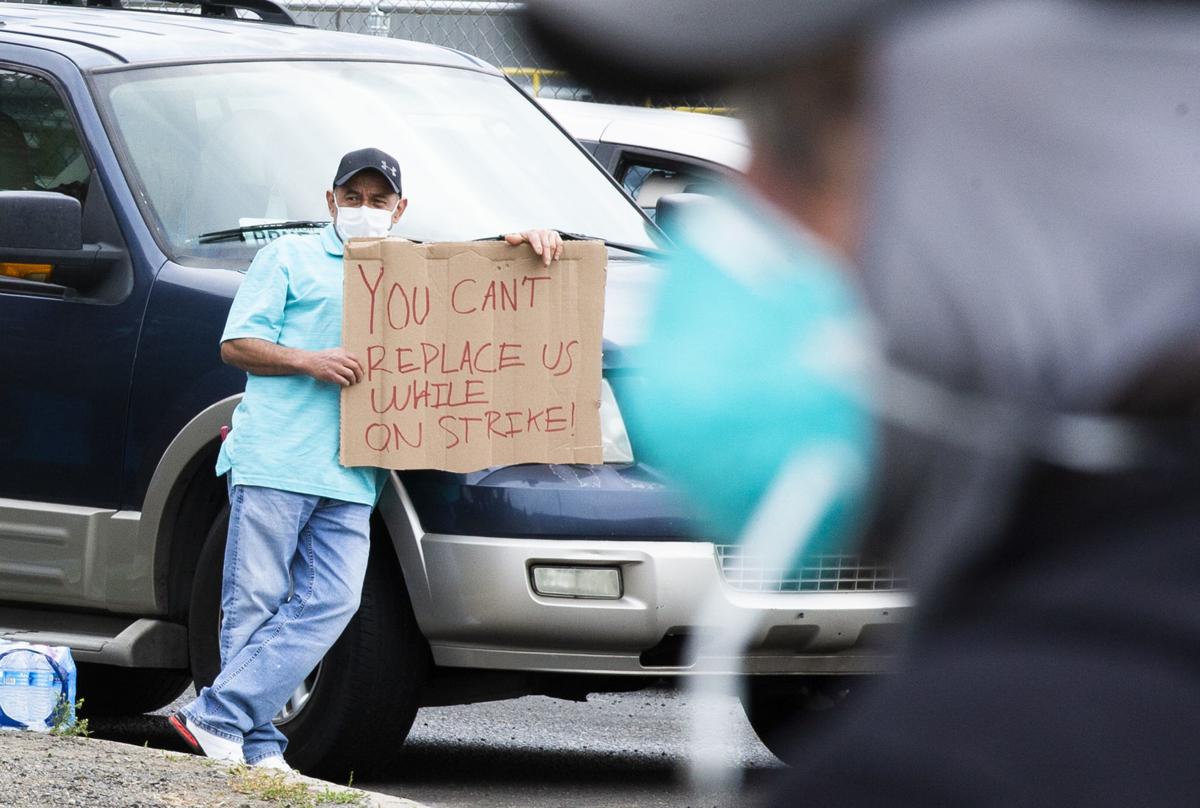 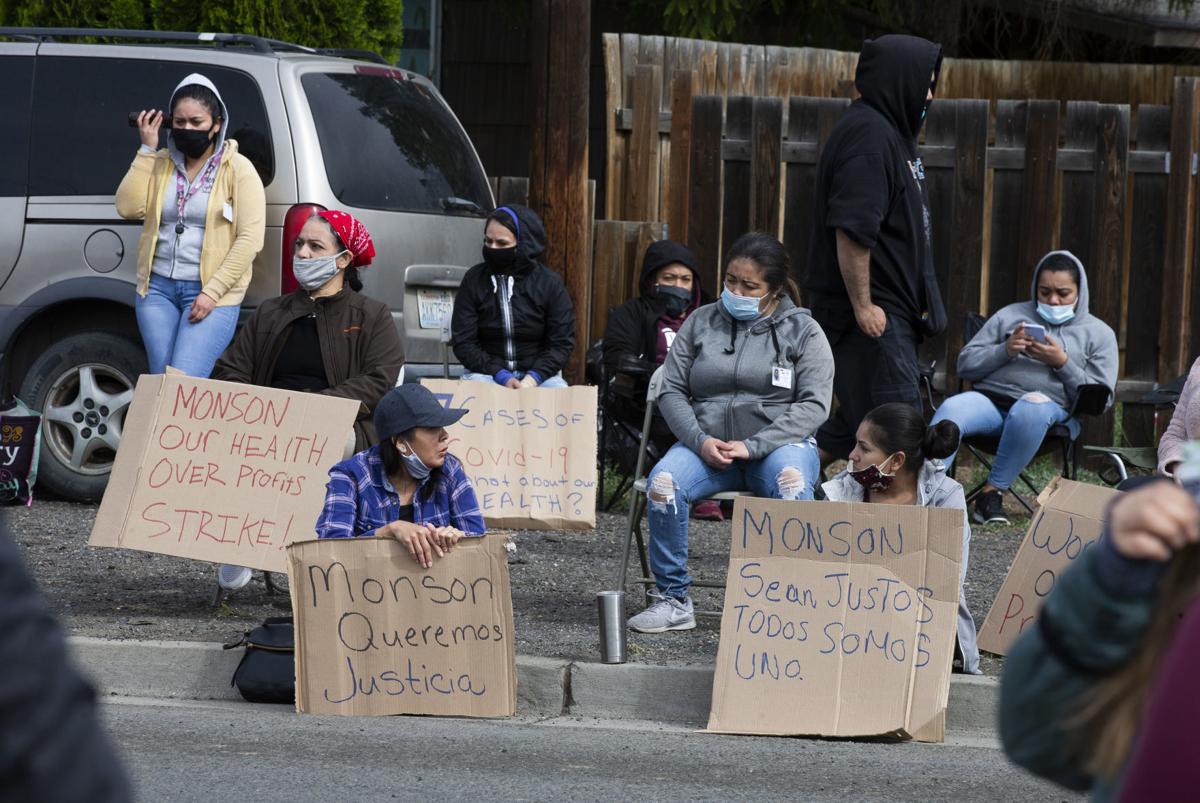 Monson Fruit Co. workers strike on Wednesday, May 13, 2020, in Selah, Wash. More than 100 workers protested in front of the business after going on strike. 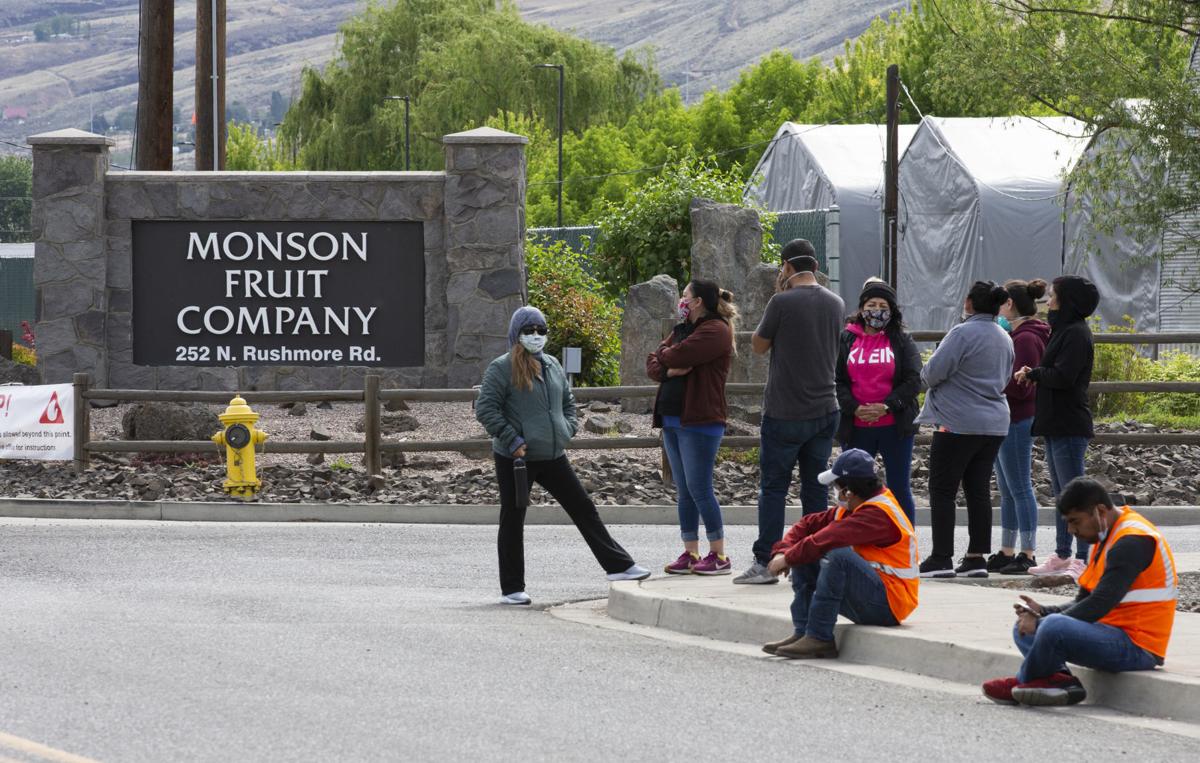 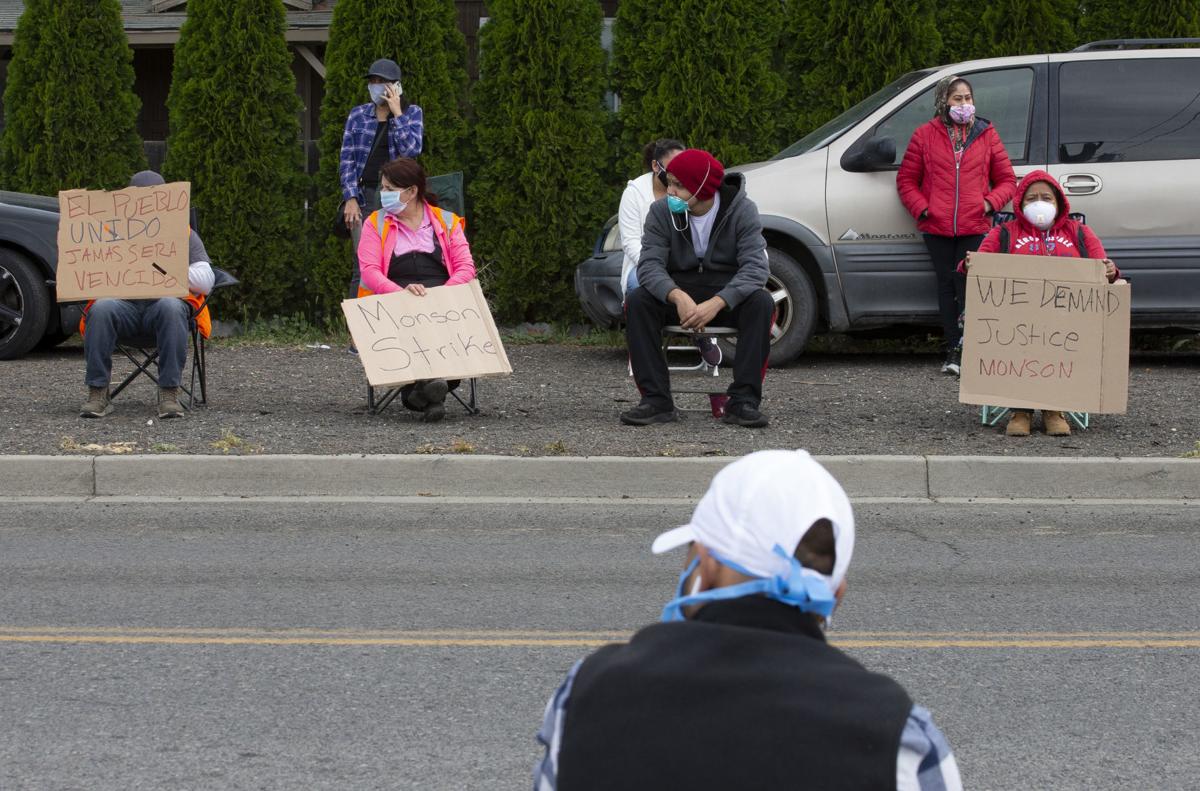 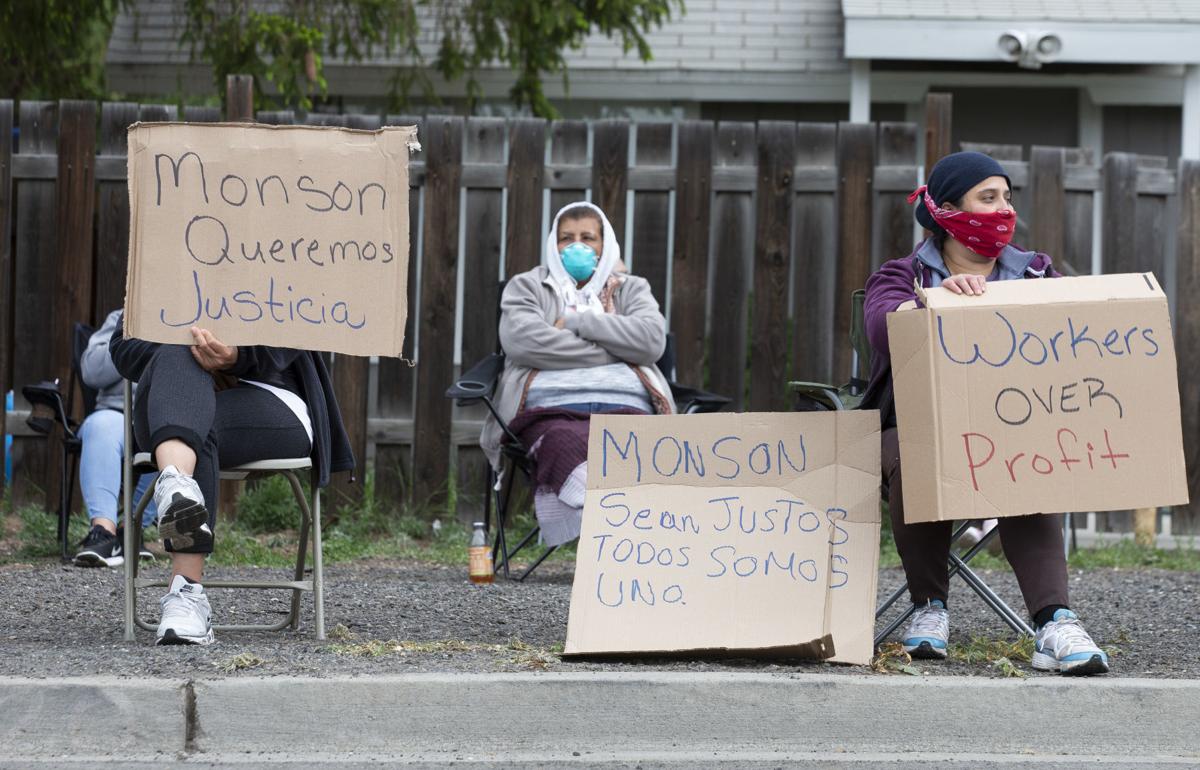 Monson Fruit Co. workers hold signs in front of the business while on strike on Wednesday, May 13, 2020, in Selah, Wash. 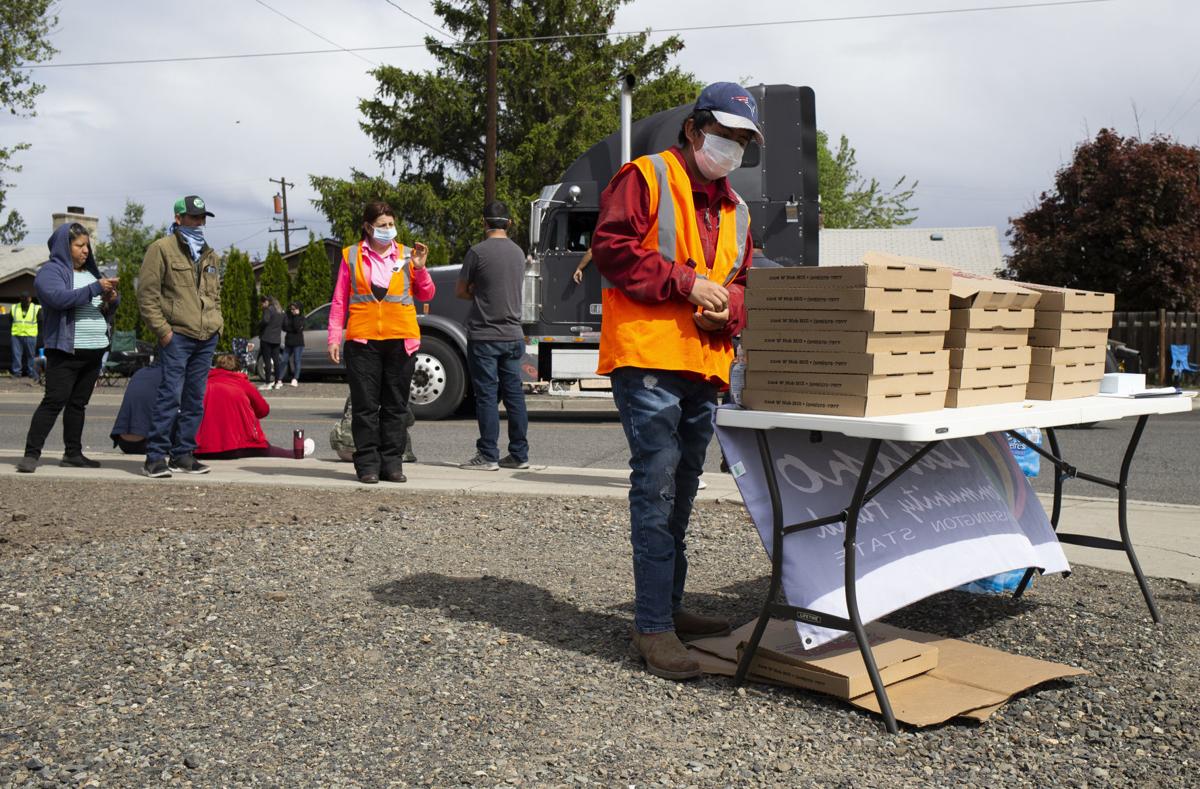 Monson Fruit Co. workers line up for pizza provided by the Latino Community Fund of Washington State while striking Wednesday, May 13, 2020, in Selah, Wash. 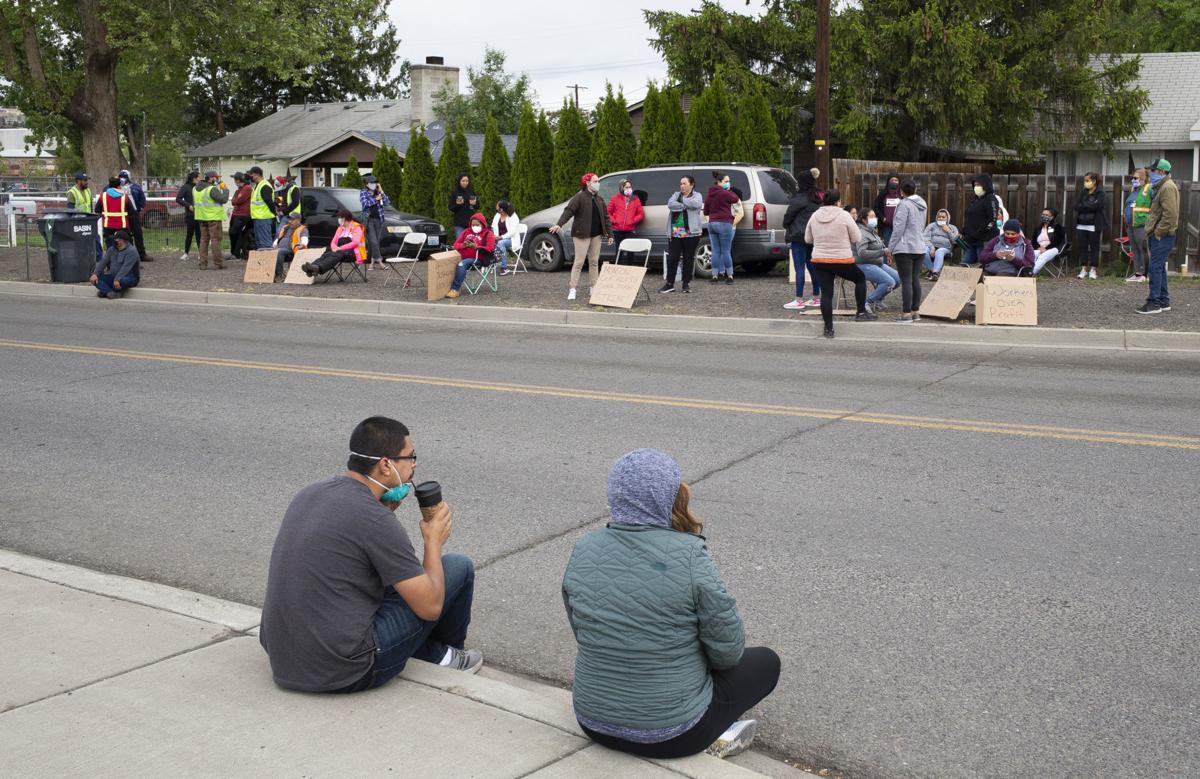 Monson Fruit Co. workers line both sides of East Naches Avenue while on strike Wednesday, May 13, 2020, in Selah, Wash.

Monson Fruit Co. workers strike on Wednesday, May 13, 2020, in Selah, Wash. More than 100 workers protested in front of the business after going on strike.

Monson Fruit Co. workers hold signs in front of the business while on strike on Wednesday, May 13, 2020, in Selah, Wash.

Monson Fruit Co. workers line up for pizza provided by the Latino Community Fund of Washington State while striking Wednesday, May 13, 2020, in Selah, Wash.

Monson Fruit Co. workers line both sides of East Naches Avenue while on strike Wednesday, May 13, 2020, in Selah, Wash.

Protests by Yakima County agricultural workers over what they consider unsafe working conditions during the COVID-19 outbreak continued Wednesday, with employees walking out of the Monson Fruit Co. in Selah.

More than 100 workers gathered in the company’s parking lot and outside the plant Wednesday morning, some holding cardboard signs demanding justice — “¡Demandos Justicia!” — or “Workers over Profit.”

Kathy Mendoza, who has worked for the company on and off for seven years, said workers were protesting an inadequate supply of personal protective equipment, sanitizing, and social distancing inside the plant. Workers also are afraid to call in sick, fearing their jobs won’t be there for them when they come back, she said.

“They didn’t tell us that people were sick until three weeks later,” said Mendoza, a Monson employee for two years. “A lot of people are scared and stressed in the workplace. Some of us have kids, and we don’t want to go home and infect people.”

Workers at other companies have voiced similar concerns. This week workers also walked out of Frosty Packing in Yakima, Allan Bros. in Naches and Matson Fruit Co. in Selah.

Jason Bakker, the general manager at Monson, said staff has met with every employee and department over the last few weeks to try to keep workers updated — a daunting task, given constantly changing COVID-19 safety protocols.

“The protocols are changing so aggressively and so quickly, and we’re trying to stay on top of it,” he said. “I’ve told workers I have an open door policy, so the strike was a surprise. But I think it happened because of fear.”

Bakker said staff have communicated with workers about the company’s efforts to ensure a safe work environment. It purchased 500 gallons of sanitizer from Swede Hill Distillery, hired six sanitation workers per shift to clean work surfaces daily while workers are on break, and joined other growers calling on the state for help securing masks.

“We have tried to follow every recommendation,” Bakker said. “We’ve taken significant steps.”

Regarding the lack of masks, Devaney said growers asked for the state’s help with personal protective equipment weeks ago but supplies have been backlogged. The state Department of Agriculture recently acquired 50,000 cloth masks for statewide distribution, and Monson received 500 Wednesday afternoon.

Devaney said growers have been informing employees who may have been exposed to confirmed cases but can only share certain details. Employers can’t get into the sick person’s symptoms or medical history, which he said is what employees have wanted.

“What employees want to know is sometimes more than we are empowered to tell,” he said. “There are confidentiality issues. If you try to explain the constraints, sometimes people think you are choosing not to tell them.”

Devaney said an added frustration for growers is that data provided by health districts can be inconsistent. Employers are sometimes told they have three confirmed cases, but not the names of the employees who tested positive, which he said leads to “huge problems with messaging and contact tracing.”

He’s also heard criticism from community members who call and say that workers who are protesting a lack of social distancing inside the facility congregate closely together while outside during protests.

“It’s been frustrating to see people demanding conditions they don’t follow themselves,” he said. “These concerns should be addressed specifically with the employers, not with signs on street corners.”

Drivers passing by Monson on Wednesday had differing reactions to the protest. Some honked in support. Others revved their engines, blanketing protestors in clouds of exhaust.

“That’s the second one today,” Adrian Mendoza said, as a silver truck sped by. “It’s not going to stop us. We’re still going to be out here.”

Familias Unidas por La Justicia filed a lawsuit in April against the state Department of Labor and Resources and the Department of Health, asking for stricter rules to protect workers from COVID-19.

Political Director Edgar Franks, who has been in Yakima County the past few days, said the worker strikes are long overdue.

“There is a lot of frustration among workers who are told they are essential but aren’t being treated that way,” he said. “They value their health and safety, and going on strike this way is the only way for them to get results.”

Devaney said workers who feel like they are working in unsafe conditions should report to the state’s complaint line or the county health department.

“If anyone ever does feel there is a violation, they need to report it,” he said.

The Labor and Industries Anonymous tip line for workplace safety violations is 1-800-423-7233,