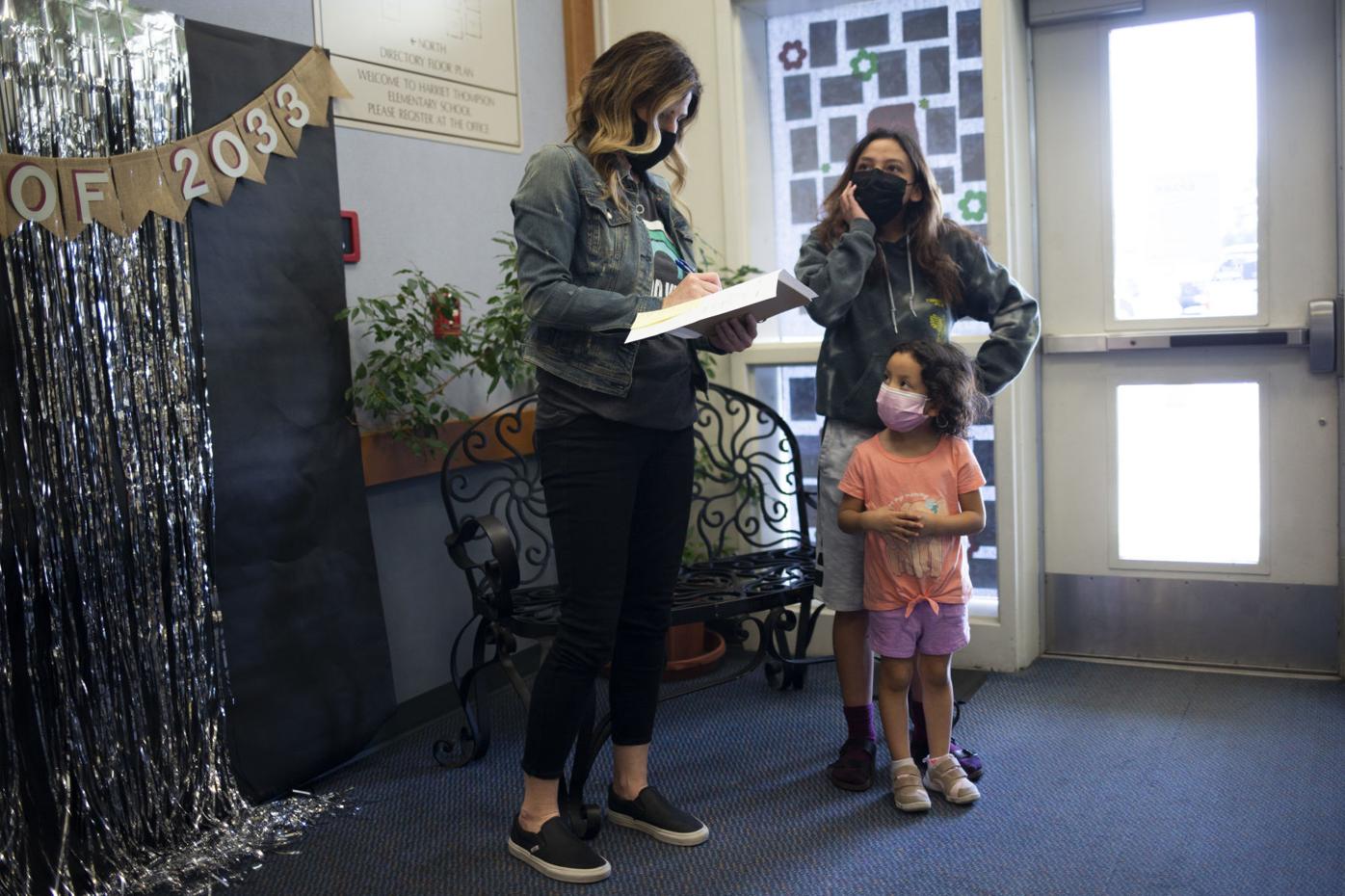 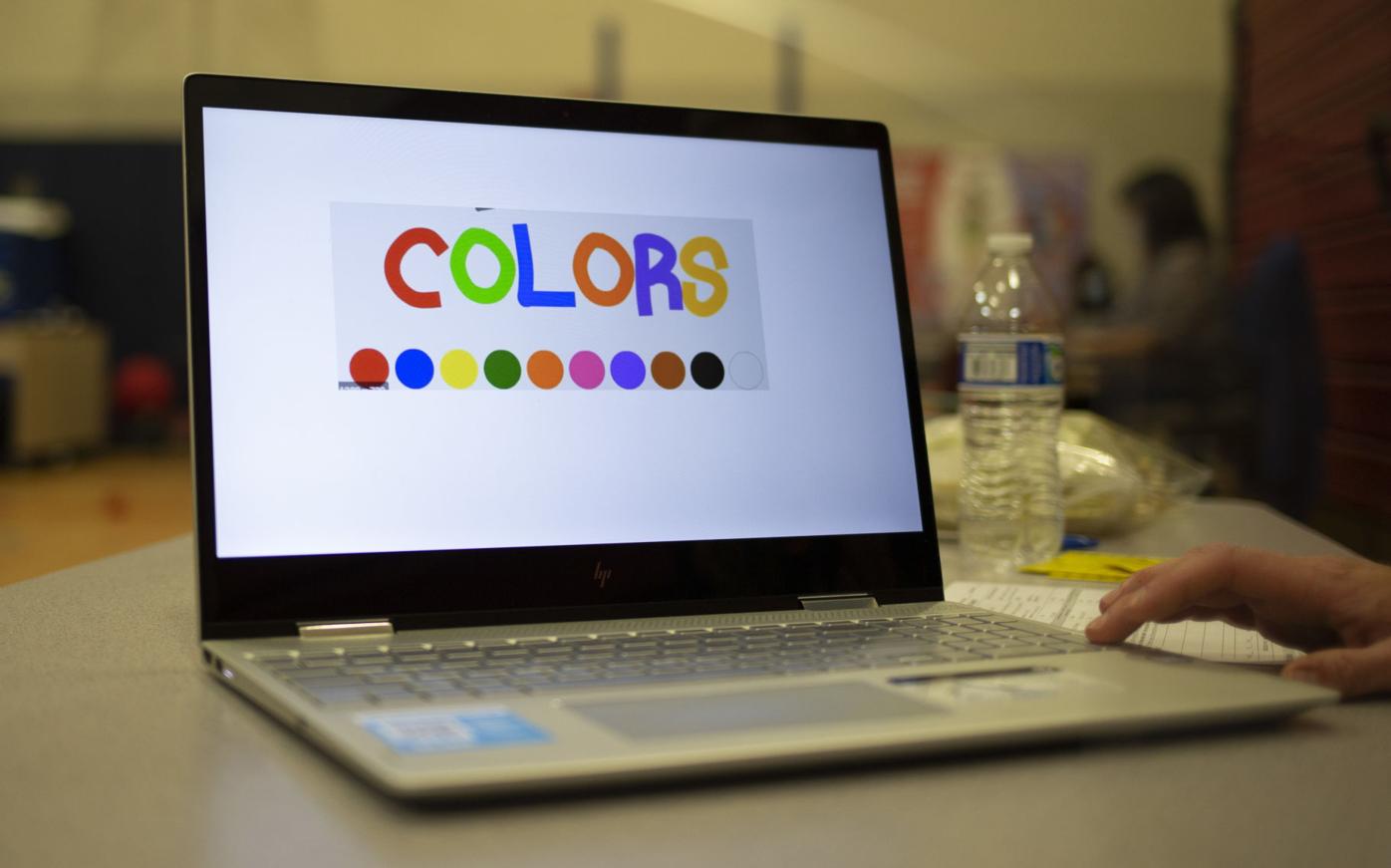 Ali Kleinow, para-educator, shows one of the tests kindergartners are given during registration in which they're asked to name the different colors shown on the screen Wednesday, April 1, 2021 at Harriet Thompson Elementary in Grandview, Wash. 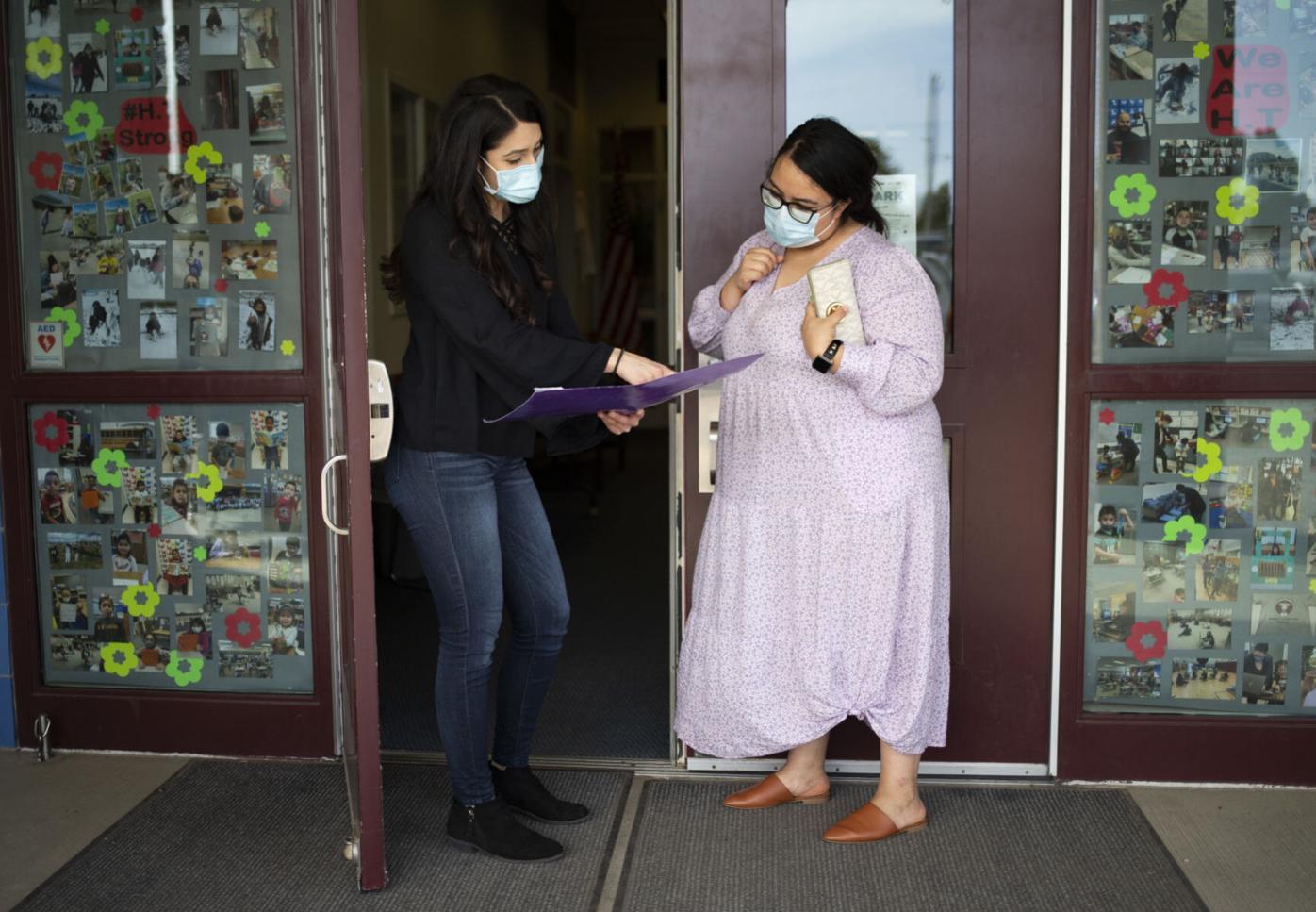 Araceli Ramirez, assistant secretary, looks at a district map with Julianna Rodriguez, right, to determine which school she should register her child for kindergarten Wednesday, April 1, 2021 at Harriet Thompson Elementary in Grandview, Wash.

Ali Kleinow, para-educator, shows one of the tests kindergartners are given during registration in which they're asked to name the different colors shown on the screen Wednesday, April 1, 2021 at Harriet Thompson Elementary in Grandview, Wash.

Araceli Ramirez, assistant secretary, looks at a district map with Julianna Rodriguez, right, to determine which school she should register her child for kindergarten Wednesday, April 1, 2021 at Harriet Thompson Elementary in Grandview, Wash.

In the past decade, kindergarten enrollment in Wapato School District has never dropped below 200 students. Until this school year.

After 237 kindergarteners joined the school system in 2019, just 185 new kindergarten students were enrolled in Wapato schools in September.

“We don’t have any way to prove it, but we can only assume the decline in enrollment we have experienced this year is due to the COVID pandemic,” said district communications director Mike Balmelli.

Other local districts saw similar drops: 169 fewer kindergarten students were enrolled in the Yakima School District at the start of this school year than last, 29 fewer in Sunnyside, 89 fewer students in West Valley, and so on.

It’s a trend that was seen statewide last year as schools embarked on the new school year teaching remotely. Statewide, enrollment in public schools had declined year-on-year by about 30,000 students, a third of which came from a drop in kindergarten enrollment, according to state data. The state said the cause was parents keeping kindergarten-aged students home.

Now, as kindergarten enrollment opens up for this coming fall, school districts are left to wonder whether there will be a flood of new kindergarten students who were held back amid the pandemic, or new first graders joining their classrooms who learned independently last year. But they’re hoping parents will help them answer that question sooner, rather than later.

This coming week, school districts throughout the Yakima Valley are banding together to push a common message: Kindergarten registration is open, and early registration is encouraged.

The push for registration

The effort is being made through partnerships with the ESD and local districts. By sharing a common message, the school network hopes to see a widespread response from parents in the region to enroll their little ones.

Kindergarten registration always begins in the spring and often stretches through summer months, but earlier registration allows schools to properly staff their classrooms, education officials say. It also gives them time to assess learning needs students will have upon arrival, to provide at-home materials to help families prepare for the new start, and to give students an opportunity to adjust to the idea of their new school campus.

“There’s some wonder about what’s going to happen. … Kindergarten is kind of the wild card,” said Balmelli of Wapato. “We’re trying to get the word out that kindergarten registration is open.”

School registration can take some time.

Parents and school staff start by making sure the student lives within campus boundaries. Then parents submit paperwork and documents like birth certificates. In some cases students walk through an assessment to help the school understand their needs with enough time to arrange proper support.

In Grandview earlier this month, paraprofessionals led kindergarten students through an assessment that started with the game Simon Says and ended with identifying the letters of the incoming students’ name. Their skills are tracked and used to help teachers prepare curriculum for the coming year, tailor orientations to areas of need among students and provide special support for students or their families, said Yesenia Mendez, the pre-K through fifth grade instructional coach at Harriet Thompson Elementary School.

This orientation process also serves as an opportunity for school staff to get to know new families and to quell stress among parents new to the system, said Principal Julie Wysong. She said it also helps get students excited for attending school. She said she hears anecdotes of kids pointing to the school building over the summer, saying it is their school. When the start of school comes, that helps reduce separation anxiety, she said. With additional layers of social isolation potentially adding to this anxiety, she said this process is more important than ever.

“Our first day for our kinder babies, I think it’s so important that that’s a good experience,” Wysong said.

Schools in the region shared campaign materials about kindergarten enrollment last year, too.

Yakima School District has been sharing messages with the community since it opened enrollment on March 1, said communications director Kirsten Fitterer.

In Highland School District, activity bags for 4-year-olds are distributed throughout the school year prior to kindergarten to help families prepare their kids for the start of K-12 and to slowly build up enrollment, said Mindy Schultz, principal of Marcus Whitman Cowiche Elementary School. When kindergarten enrollment opens in the spring, the district usually has at least 60% of incoming students on a list to reach out to, and this year is not an exception.

But with added uncertainty from a dip in enrollment this year, school officials share a common message.

“With COVID, I’m sure there is a lot of uncertainty as far as students who are coming in who would have come into kindergarten last year,” said Grandview School District communications director Elena Olmstead. “We’re hoping we can capture all of those students. We’re really just trying to figure out where we’re going to stand as far as kindergarten numbers so we can properly plan and do everything we can to best serve these students.”