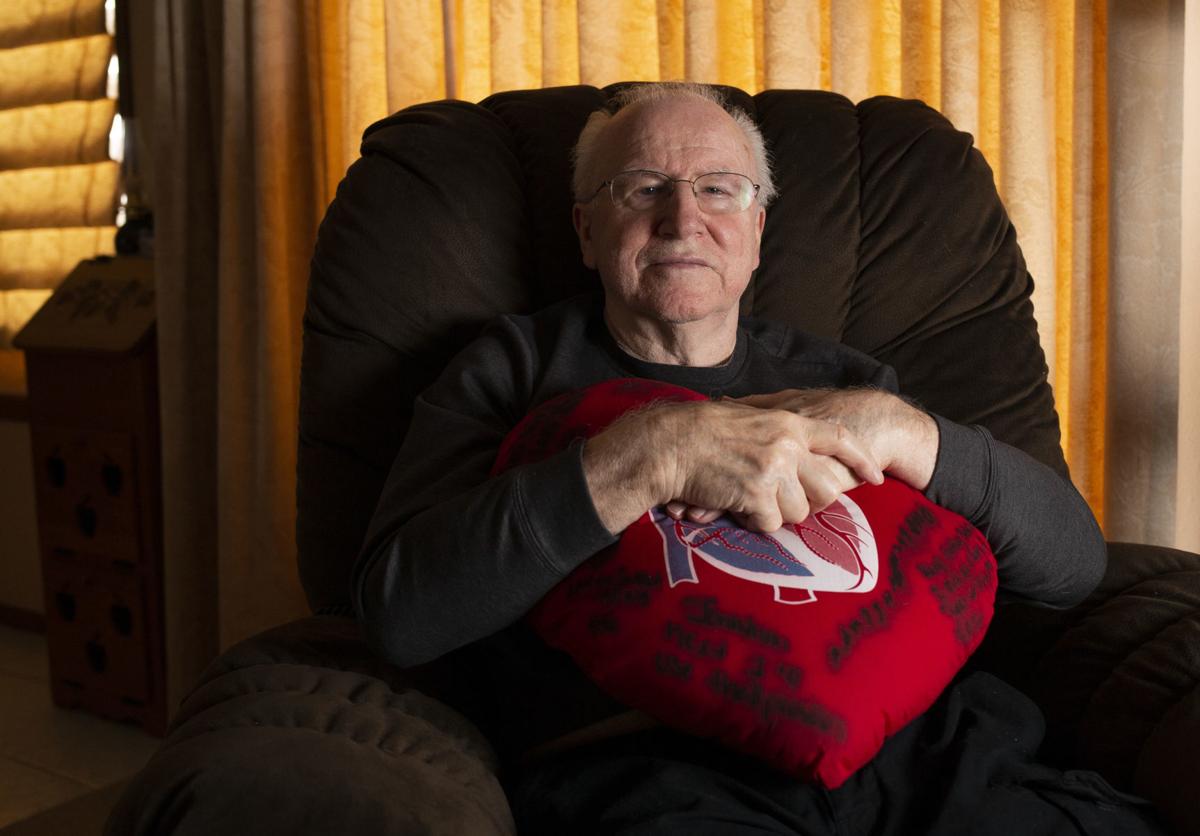 Jerry Denning poses for a portrait with a heart-shaped therapeutic pillow signed by staff from Astria Regional Medical Center as well as Denning's family members on Thursday, Jan. 16, 2020 in Yakima, Wash. Denning was given the pillow to hold against his chest to ease discomfort from coughing or laughing while recovering from heart surgery. 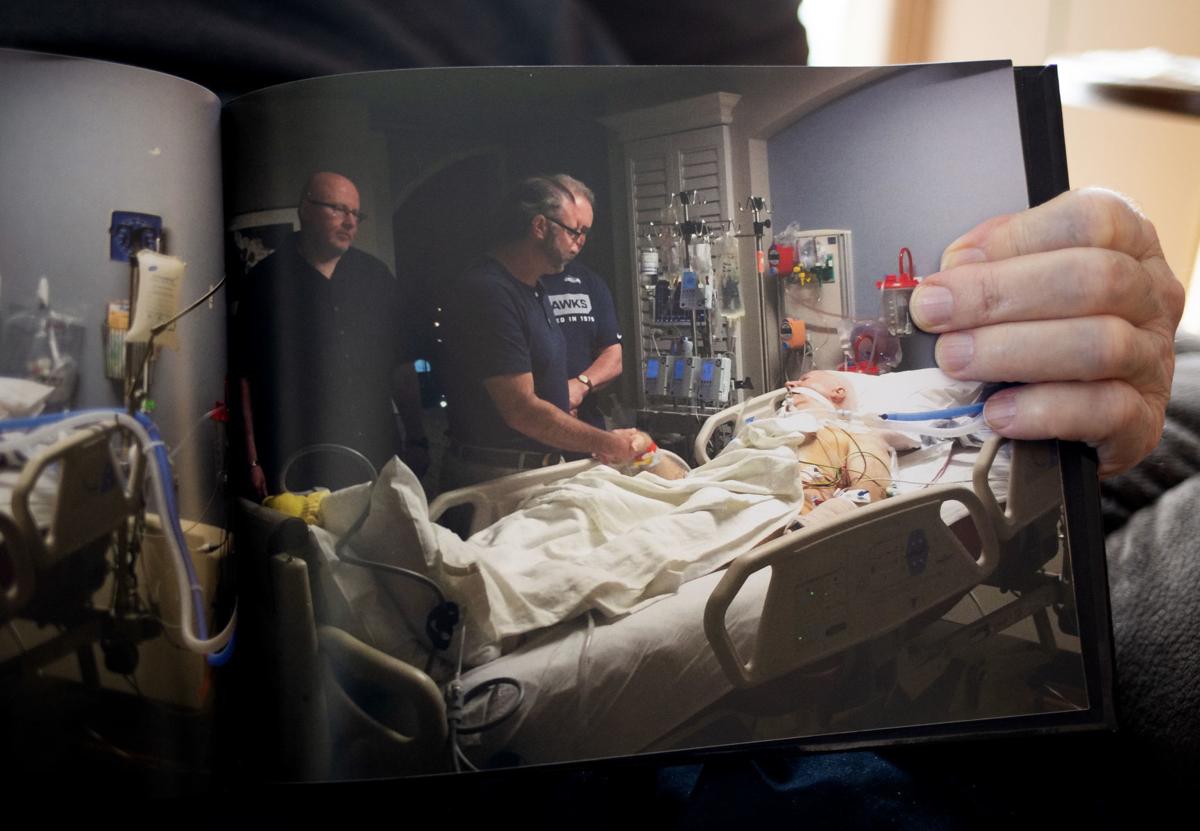 Jerry Denning holds open a book of photos from his time spent at Astria Regional Medical Center on Thursday, Jan. 16, 2020 in Yakima, Wash. In the photo his sons, from left to right, Kelly Denning, Todd Denning and Keith Denning visit Jerry in the hospital.

Jerry Denning poses for a portrait with a heart-shaped therapeutic pillow signed by staff from Astria Regional Medical Center as well as Denning's family members on Thursday, Jan. 16, 2020 in Yakima, Wash. Denning was given the pillow to hold against his chest to ease discomfort from coughing or laughing while recovering from heart surgery.

Jerry Denning holds open a book of photos from his time spent at Astria Regional Medical Center on Thursday, Jan. 16, 2020 in Yakima, Wash. In the photo his sons, from left to right, Kelly Denning, Todd Denning and Keith Denning visit Jerry in the hospital.

Astria Regional Medical Center in Yakima is the second hospital in Washington state to close its doors in the past five years.

Data from the Washington State Hospital Association shows hospital closures in the state are rare. Walla Walla General Hospital is the only other hospital that’s closed since 2014. Prior to that, Deer Park Hospital north of Spokane closed in 2008.

But Regional’s closing highlights national trends that show hospital health across the country is suffering. At least 30 hospitals have entered bankruptcy proceedings in the past year.

Beth Zborowski, a senior vice president with the Washington State Hospital Association, said every hospital closing comes with challenges. For former and current Regional patients, the hospital’s closing raises concerns about access to care and its quality.

Now he’s worried about his options.

“My care will be compromised for sure,” he said. “We need this priceless little gem to help save others’ lives.”

Astria Health, which filed for Chapter 11 bankruptcy protection in May, announced Jan. 8 that Regional would be closing. A hospital news release said Regional had lost more than $40 million since its purchase in August 2017.

Hospital officials said they’d exhausted all options — possible deals with lenders who could provide additional liquidity had fallen through, as had partnering with or selling to other health care systems, the news release said.

By Jan. 10, several physicians and nurses no longer had jobs. At 12:01 a.m. Monday, the hospital’s emergency department closed.

The Washington State Nurses Association asked the U.S. Bankruptcy Court to reconsider the sudden closing Tuesday. Judge Whitman Holt said he didn’t want to see Regional close, but it was necessary to keep Astria’s hospitals in Sunnyside and Toppenish operating, along with other Astria services in Yakima.

Zborowski said a big issue contributing to a hospital’s risk of closure is underpayment by government payers, such as Medicaid and Medicare.

Statewide, 6 out of 10 hospital patients are covered by government programs, where reimbursements fall below cost of care. Medicaid pays about 67% of that cost, while Medicare covers about 80%, Zborowski said.

“Governmental payers pay much less, and typically rural areas have more people in their communities who receive health care through Medicare or Medicaid,” she said. “This has resulted in increased shortfalls or losses from these programs.”

Zborowski said 23% of the state’s hospitals operate on healthy margins, without which they can’t invest in new equipment, upgrade facilities or hire additional staff — all factors that present challenges for patient care.

Picking up the slack

But it also created an opportunity for the health care community to work together in new ways, she said — something she’s seen with other closings, as well.

Walla Walla General Hospital was an acute care hospital with 72 beds. When it closed in 2017, Providence Health and Services stepped in. Providence St. Mary has 142 licensed beds and an average daily census of 58 patients.

“The closure of a major hospital in a city the size of Yakima may have implications for access to care issues in the short term,” Executive Director Andre Fresco said in a written statement to the Yakima Herald-Republic. “However, we are fortunate in our community to have strong partners in health, social services and government that have mobilized to ensure quality services continue to be available. These strong relationships are allowing us to find solutions in real time to minimize an emergent problem.”

But former Regional patients say they’re concerned about other facets of care, such as travel time to reach services and transfers out of town.

Denning said that a few years ago, he was taken from Virginia Mason Memorial hospital to Regional, home of the Astria Heart Institute, when he was in the midst of a heart attack. Regional’s Dr. Baljit Sharma performed an open heart surgery and six bypasses, Denning said.

“The staff before, during, and after saved my life,” he said. “From the nurses who got to know me and my family, to the therapists that helped me regain my strength and mobility, all were an integral part of my ability to write to you today.”

Denning said the staff’s specialized training allowed him to recuperate surrounded by supportive family and friends.

“Because of all of them and that hospital specializing in what I needed, I was able to recover and heal in the company of my friends and family here in Yakima, and not Seattle,” he said. “What they did really did save my life.”

Zborowski said travel considerations impact people’s decision to seek care, particularly where preventative, chronic or prenatal care is involved. Studies have shown people who have to travel more than 30 minutes are most impacted, she said.

“This can lead to people waiting to seek care until they are sicker, possibly in an emergency room instead of a clinic,” she said.

“If a person cannot find a provider who is in their insurance network, or if they don’t have insurance, they may delay care until it is an emergency,” she said.

Now the focus is ensuring Medicaid patients continue to have sufficient access to health care, he said. The agency staff, which includes a physician and team of nurses, will work with managed care organizations, which are private companies contracted to deliver Medicaid benefits, to determine how patients can receive care with health providers still in the Yakima Valley.

“We need hospital coverage and doctor coverage, that’s what we need to ensure,” he said.

Hospitals often are one of the largest employers in their communities, so closures also can impact the economy and vitality of communities, Zborowski said. Astria Regional had about 500 staff members and physicians.

Zborowski said preserving access to health care in rural communities is a top priority for the hospital association.

The association has advocated at both the state and federal levels for new payment and delivery models, such as expanding innovative payment methods or using telemedicine to connect patients and providers for check-ins.

But Zborowski said hospitals face significant challenges, including unfunded mandates for new regulations by state and federal governments as well as payment cuts — particularly Medicare payments at the federal level.

“We believe that our state and federal governments want hospitals to stay open,” she said. “But if they continually impose new expensive regulations or make payments cuts, we will see more hospitals close.”

Other regulatory agencies also said what they can do to help hospitals stay open is limited.

“We encourage lawmakers and regulators to support initiatives that give hospitals the flexibility to address the long-term viability of rural health care in ways that reflect the unique needs of each community,” she said.

Reporters Mai Hoang and Janelle Retka contributed to the story.

This story is part of a three-day package on Astria Regional Medical Center, its sudden closure and its history.

•  A look at the numbers finds that Regional's mix was heavy on Medicare and Medicaid patients, making it difficult for the hospital to sustain operations.

• The history of St. Elizabeth, which became Astria Regional Medical Center. It was Yakima's first hospital.

• Former staffers reminisce about their time at St. Elizabeth and its various iterations after that. Though they saw trouble on the horizon, they loved their jobs.

To find our collected stories on the closure of Astria Regional, visit www.yakimaherald.com/special_projects/astria/.

What services will Astria Health continue to offer in Yakima?

Among the facilities still open in Yakima are:

• Astria Health Centers, which offer a variety of primary and specialty care services, including specialized outpatient surgeries and procedures.

Other ambulatory outpatient services that will continue include laboratory, therapy and advanced imaging services.

What about other services?

Astria’s Sunnyside and Toppenish hospitals will remain open and will continue to offer inpatient hospital care and ambulatory care, outpatient and emergency care.

What if I need my medical records?

What if I have questions?

After a career in law enforcement, James Rivard Sr. worked as a security officer and maintenance man at St. Elizabeth Hospital for about four …