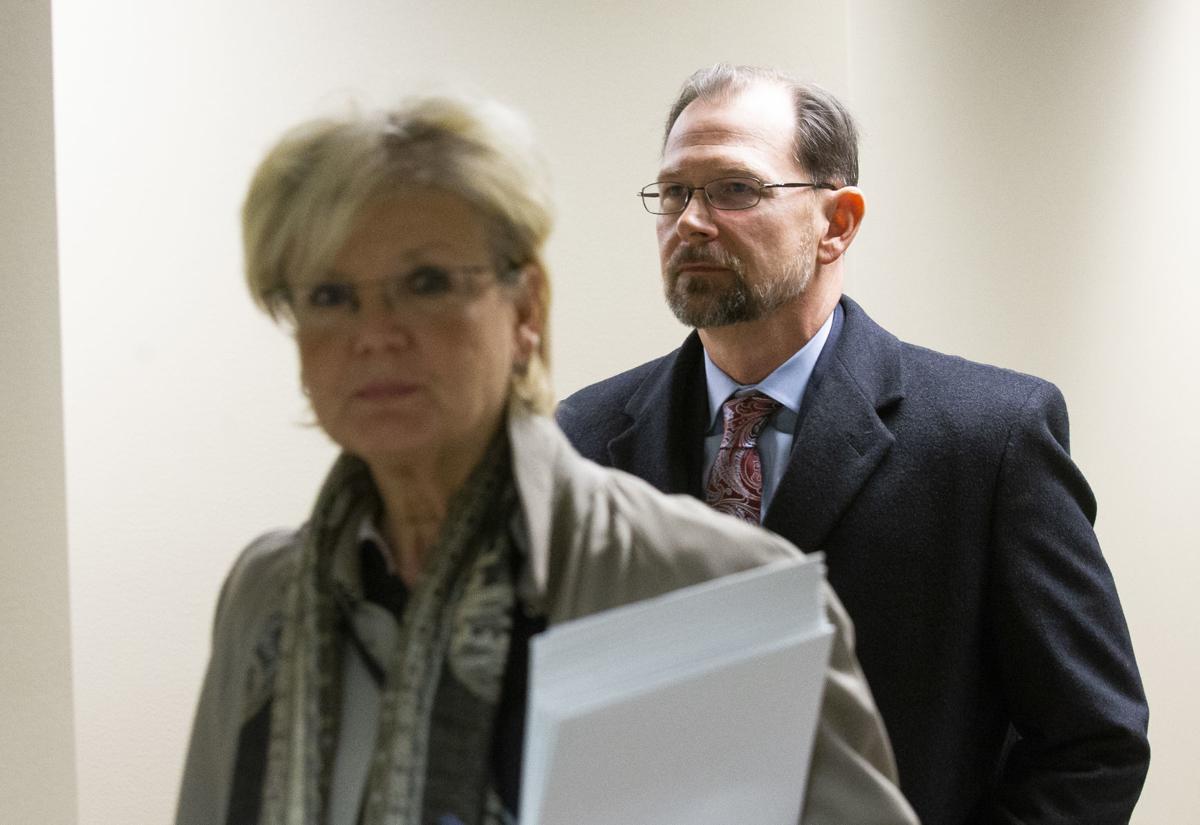 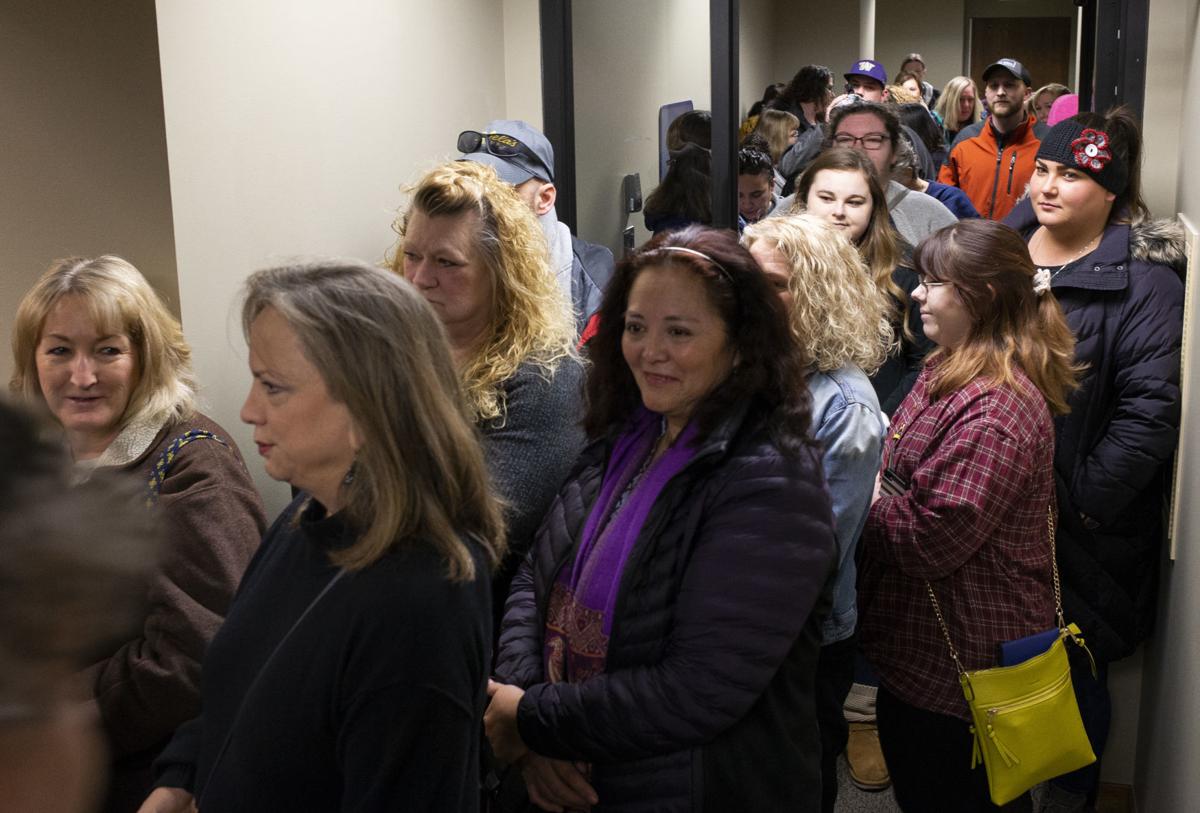 People line up from the entrance of U.S. Bankruptcy Court to the elevators on the second floor of The Tower to try to get a seat in court to watch the court hear an emergency motion to keep Astria Regional Medical Center open on Tuesday, Jan. 14, 2020 in Yakima, Wash. A group of about 15 people were allowed to listen from the jury room once the courtroom was full but many others were turned away.

People line up from the entrance of U.S. Bankruptcy Court to the elevators on the second floor of The Tower to try to get a seat in court to watch the court hear an emergency motion to keep Astria Regional Medical Center open on Tuesday, Jan. 14, 2020 in Yakima, Wash. A group of about 15 people were allowed to listen from the jury room once the courtroom was full but many others were turned away.

John Gallagher said he and other Astria Health executives went “pretty much right to the end” in trying to prevent the closure of Astria Regional Medical Center in Yakima.

“The other two hospitals in the company (Astria Toppenish and Astria Sunnyside) continue to improve and produce revenue that we used for the last 28 months to support Yakima,” said Gallagher, CEO of both Astria Health and Astria Regional, during a U.S. Bankruptcy Court hearing Tuesday. “It is to the point that if we didn’t do something else, we could have three failing hospitals.”

In the end, the U.S. Bankruptcy Court declined Tuesday to reconsider the authorization to close Regional.

The hearing Tuesday came a day after Astria Regional’s emergency department closed its doors. During his testimony, Gallagher said that the last patients were transferred to other facilities Monday and the organization had started the process of relinquishing Regional’s license with the Department of Health.

The move closes a hospital with a deep history in the community. It originally opened in 1891 as St. Elizabeth Hospital by the Sisters of Charity of Providence. Its closing leaves Virginia Mason Memorial as the only hospital in Yakima.

Holt, in making his ruling, emphasized that he did not base his decision on his personal view of the hospital closure, but bankruptcy law. He expressed that the hospital shutting down would have negative impacts on him and his family since they live in the Yakima area.

“A year from now, I could have a heart attack in this room,” he said. “And the Astria hospital is not that far. My wife could be in a horrible car accident. I’d much rather, if I had a personal choice, have two emergency rooms.”

Holt said in his ruling that Astria Health explored all avenues to keep the hospital open, including seeking financing and finding a buyer, and that closing was necessary to prevent negative impact on Astria Health’s other operations, including its hospitals in Toppenish and Sunnyside and a network of outpatient clinics.

Holt also said that his ruling isn’t an endorsement on how Astria Health handled the closure.

“Maybe they could have rolled this out better,” he said. “That’s certainly true. There may be legal consequences. But the court thinks the overall decision (to close) was a reasonable business judgment.”

Holt also addressed why Astria Health’s motion to close initially was sealed and not available to the public when it was filed Jan. 3.

While sealing the document went against his principles of transparency and denied the public a chance to participate in the process, he also took seriously Astria Health’s assertion that revealing the closure prematurely could endanger patient lives.

“There is no way to push the reset button and go back,” he said. “The court wasn’t going to take that risk.”

Holt denied the motion to seal on Jan. 8 and the court made the document available to the public as Astria Health announced that Astria Regional would close.

In the end, Tuesday’s hearing provided opportunity for staff and medical providers to speak out on several issues, including a lack of communication from executives, namely Gallagher, in the weeks leading up to the closure.

They said a lack of notice denied hospital staff an opportunity to come up with a better transition.

“We would have been there to help to make this a better transition,” said Laurie Robinson, an Astria Regional day shift charge nurse and trauma coordinator, after the hearing. She testified during the hearing.

In his closing comments, Darin M. Dalmat, attorney for the Washington State Nurses Association, also took issue with Astria Health’s attempt to question whether WSNA and staff had any standing to raise their concerns before the court when they are adversely affected by the closure.

“It’s offensive that Astria Health suggests we don’t have the standing to raise those questions,” he said.

Astria Regional staff who testified during Wednesday’s hearing said they were concerned about the closure’s effect on medical care in the community. Dr. Mark Silverstein, chief of staff at Regional, said the region will lose access to major trauma and cardiothoracic services, along with more routine procedures, because doctors and nurses may feel less comfortable performing them without Regional’s resources.

“The gap in coverage the Yakima Valley now faces is staggering, but Astria continues to describe this closure as a non-event,” he said. “That couldn’t be further from the truth.”

Staff also said the hospital’s loss would hurt the poorest and vulnerable members of the community.

Dr. Rachel Monick, an emergency department physician, said the hospital was near lower-income neighborhoods in Yakima. Driving to Seattle or the Tri-Cities may not sound like much when one has resources, but it presents a significant challenge to those who don’t have access to a car or other transportation.

Sam Maizel, Astria Health attorney, fired a series of questions at Monick, questioning whether she knew about the payer mix of Astria Regional and whether Medicare and Medicaid payments covered the cost of procedures. At times, Maizel’s voice rose in frustration, prompting Holt to ask him to calm down.

“Once your business becomes dealing with human lives, it becomes important what the community impact (of closing) is,” Monick said in response.

Maizel, in his closing comments, later apologized for raising his voice but said it was a product of numerous health care bankruptcies that, in many cases, ended with a negative result. He noted that some 30 U.S. hospitals entered bankruptcy in the past year.

“I have had to deal with great institutions, like this one, that provide high-quality health care to communities that deserve it but could not financially support it,” he said.

Providing 60 days’ notice to employees, which is what is typically required by the state for a mass layoff, would have provided additional time to transfer patients, give time to work with partner providers on a transition plan and offer employees a chance to start looking for new jobs.

“There are lives at stake,” said Anne Tan Piazza, senior director of strategic initiatives in an interview following the hearing.

Piazza said that the WSNA will start bargaining with Astria Health on Wednesday for severance and other benefits that could be afforded to the 140 Astria Regional nurses the union represents.

“We have a right to demand bargaining on the impact of the closure,” she said. “We will continue our advocacy on behalf of the nurses and the community at large.”

More than 460 people worked at Regional.

Questions and answers about Astria services in Yakima

Once Astria Health completes the closure of Astria Regional Medical Center, it will focus on ambulatory, or outpatient, care in the city of Ya…