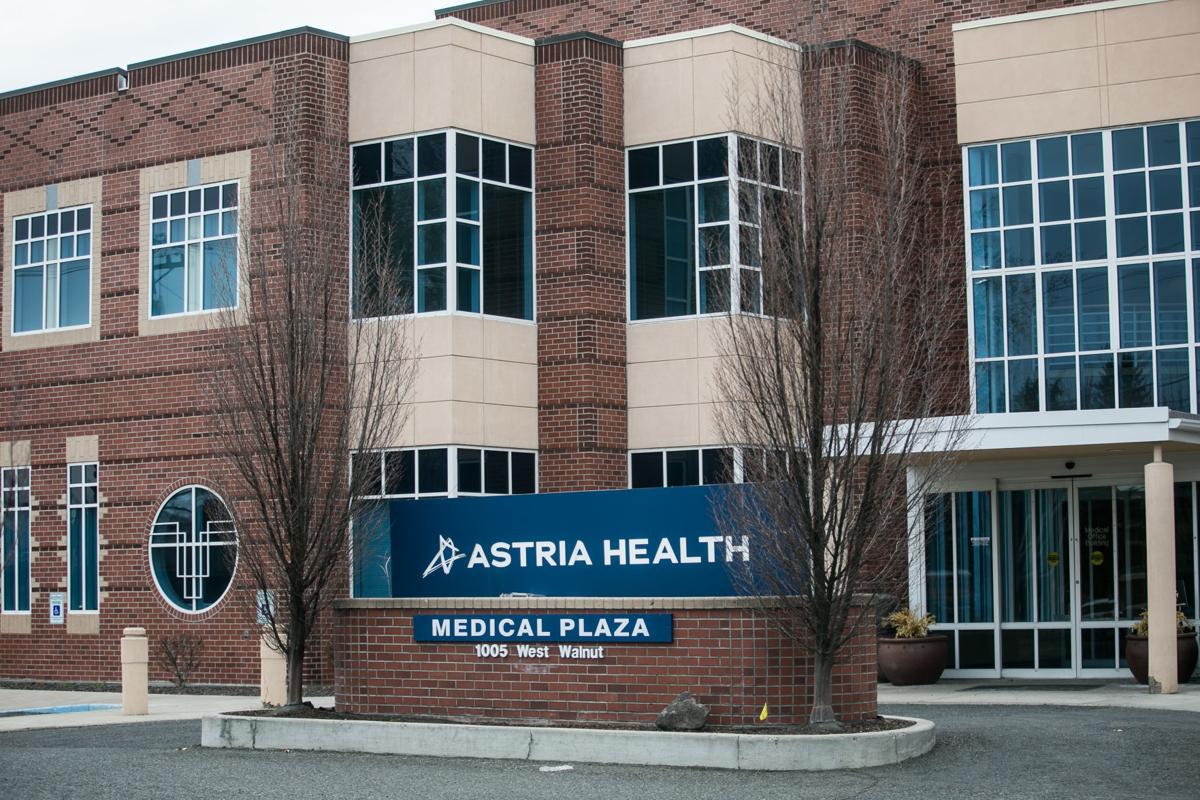 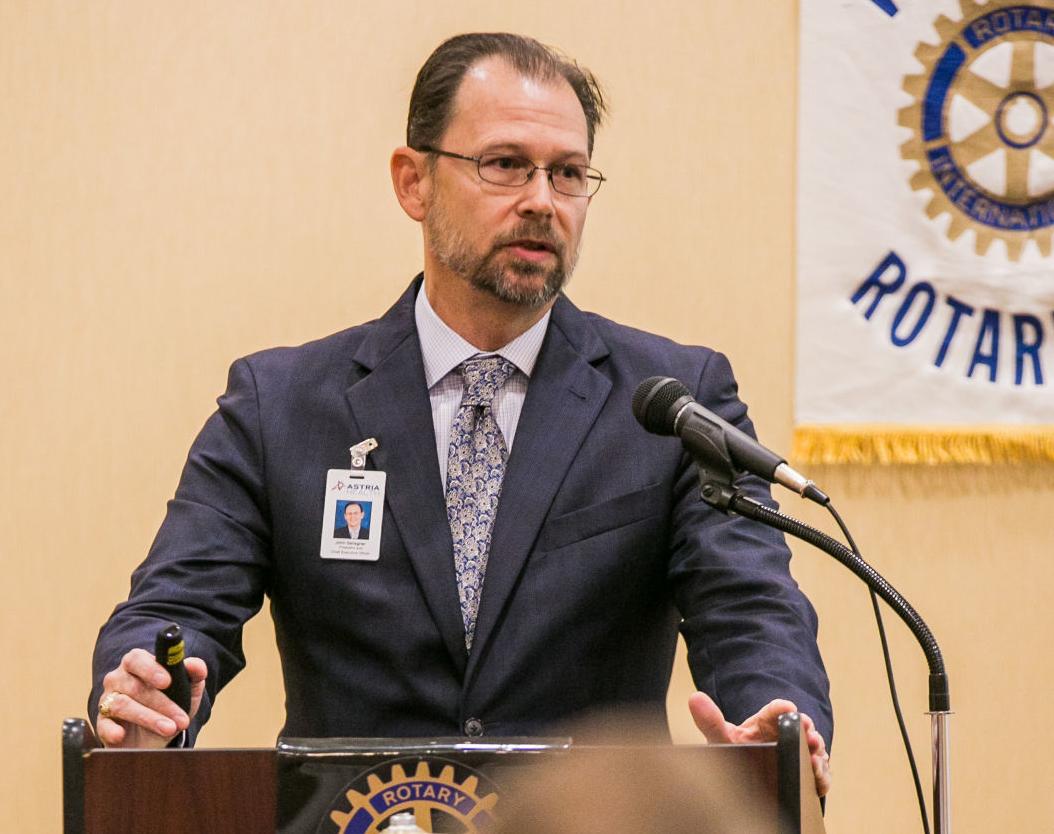 FILE — John M. Gallagher, Astria Health president and CEO, speaks to members of Sunrise Rotary about the decision to file for Chapter 11 bankruptcy along with an update on continued care Wednesday, Aug. 14, 2019, at the Holiday Inn, 802 E. Yakima Ave. in Yakima, Wash.

FILE — John M. Gallagher, Astria Health president and CEO, speaks to members of Sunrise Rotary about the decision to file for Chapter 11 bankruptcy along with an update on continued care Wednesday, Aug. 14, 2019, at the Holiday Inn, 802 E. Yakima Ave. in Yakima, Wash.

In a speech to the Yakima Southwest Rotary in August, John Gallagher, CEO of Astria Health, noted that the organization had hired 48 new specialists in the nearly two years since the organization acquired hospitals in Yakima and Toppenish.

Gallagher peppered his talk with stories about how essential these specialists were in saving the lives of Yakima Valley residents.

When it came time to talk about Astria Health’s decision to file for bankruptcy in May, Gallagher painted it as a “strategic” move designed to get the organization back to a sound financial state so it could focus on providing essential health care services.

“We’re here to stay,” he said during his speech. “We’re looking forward to taking care of the community. We’re not going anywhere.”

A little over six months later, Astria Health has significantly decreased its services in the Valley.

Astria Health closed Astria Regional Medical Center in Yakima in mid-January, leaving Yakima with one hospital. Astria said Regional had lost tens of millions of dollars and it could no longer subsidize the losses with revenues from the Sunnyside and Toppenish hospitals, which remain open.

When the closure was announced, Astria Health officials said the organization would continue to serve patients in Yakima and the Upper Yakima Valley through its line of primary and specialty clinics.

Since then, however, Astria Health has closed several clinics in Yakima, laid off staff and terminated provider contracts.

All those clinics were at the Medical Office Building, or MOC, on the Astria Regional Medical Center campus in Yakima. They provided gastroenterology, urology, cardiology, orthopedics and occupational health services. They remained open after the closure of Astria Regional.

Susan Goodman, an attorney appointed by the U.S. Bankruptcy Court to monitor health care at Astria Health during Chapter 11, referenced the clinic closures and staff reductions in a report.

Additionally, the Yakima Herald-Republic talked to several current and former Astria Health employees who confirmed layoffs and provider contract terminations. They requested anonymity due to fear of retaliation.

Current and former employees confirmed that some providers were laid off or terminated shortly after Jan. 8, when Astria Health announced plans to close Astria Regional.

One area hit hard was cardiology.

According to Goodman’s report, the two cardiologists were seeing upward of 20 patients a day. The increased workload led to delays in both invasive and noninvasive cardiac testing.

Astria Health continued to lay off employees and terminate provider contacts through February, and employee accounts confirm that some of those layoffs and terminations occurred as recently as the end of the month.

Goodman said in her report that several employees and providers were let go in early February, including a cardiologist, two general surgeons, and two orthopedic surgeons.

She said providers voiced concern over the forced departure of colleagues. Those providers had scheduled upcoming procedures or were providing follow-up care.

Goodman wrote of one orthopedic surgeon who, at the time of a sudden contract termination, had patients who were just a day out from surgery and was not given any time to transition the patients to another provider.

Former Astria Health employees and providers who talked to the Herald-Republic expressed similar concerns regarding the lack of time given to transition patients to alternative providers.

One specialist whose contract was terminated said he had scheduled surgeries and did not know what became of his patients.

Astria Health has been removing providers from its directory in recent weeks. An online directory on its website shows just one or two providers in several categories.

Several Astria Health Center locations, including the cardiology clinic, are no longer listed on its website.

Goodman, the patient care ombudsman, said providers told her the Yakima clinics were being consolidated and the services once offered at other clinics, such as cardiology, would end up at the Astria Health Center Multi-Specialty & Diagnostics Center on Summitview Avenue.

Developments in its bankruptcy case may continue to impact Astria’s presence in Yakima. A bidding process for some or all of its assets will start next month and go through May.

Astria Health is also seeking financing to reorganize and emerge from bankruptcy. The organization has until June 1 to submit a bankruptcy reorganization plan to the U.S. Bankruptcy Court.

Astria has continued to promote its behavioral health unit at Astria Toppenish Hospital. The new unit was completed at the end of 2018. Under a law passed during last year’s state legislative session, the hospital is receiving a higher reimbursement rate for each patient being cared for in the unit. Additional legislation to help smaller noncritical access hospitals, including Astria Toppenish, was proposed this session.

Meanwhile, Astria Sunnyside submitted a letter of intent to apply for a certificate of need to offer what is called percutaneous coronary intervention, or PCI, a nonsurgical procedure in which a stent is inserted to open a narrow or blocked coronary artery.

The state Department of Health confirmed the hospital submitted an application now under a screening review that should be completed by the end of this month.

Until late last year, Astria Regional Medical Center was the only hospital in Yakima County offering PCI on an elective basis.

Astria Sunnyside and Virginia Mason Memorial were permitted to do it on an emergency basis, such as a response to a heart attack.

Both applied for the Certificate of Need from the state Department of Health, which would enable them to do the procedure as a preventative measure.

Late last year, the state Department of Health extended approval for Memorial but rejected Astria Sunnyside’s application, concluding that the hospital did not provide substantial evidence it could increase PCI volumes to reach the required state threshold of 200 procedures annually and expressing a lack of certainty of whether Astria Sunnyside had the means to offer elective PCI.

On Dec. 17, Astria Health attorneys indicated that approval of Memorial to do the procedure virtually eliminated Astria Regional’s competitive advantage and put the hospital in an even worse financial state.

Astria Health officials said previously that the rejection was puzzling, considering that it would be providing an additional service in the Lower Yakima Valley, while Memorial, at the time, was replicating a service already offered at another hospital.

Overall, nearly all Astria Health's business entities under bankruptcy protection continued to lose money in January, including the one that ran the now-closed Astria Regional Medical Center, according to the operating statement filed by Astria Health.

Astria Health entities had total revenues of $16.2 million and expenses of $16.4 million. The total loss, when including additional restructuring costs, additional operational expenses and depreciation, was $2.5 million.

In January, SHC Medical Center-Yakima, the business entity for Astria Regional and several nearby clinics, reported total revenue of $1.64 million and expenses of $5.3 million. The total loss, including additional expenses, depreciation and interest, was $4.65 million.

SHC Medical Center–Toppenish, the business entity for Astria Toppenish Hospital and several are clinics, also lost money in January, though far less than its Yakima counterpart. SHC Medical Center-Toppenish reported revenues of $2.57 million and expenses of $2.38 million. With additional expenses, depreciation and interest lead to a loss of a little over $7,900.

The Sunnyside Community Hospital Association, which runs the 25-bed Astria Sunnyside Hospital, continued to be a financial bright spot for Astria Health. It reported net revenues of $11.6 million and expenses of $8.6 million. With additional costs, expenses and depreciation, it reported a net profit of $2.68 million.