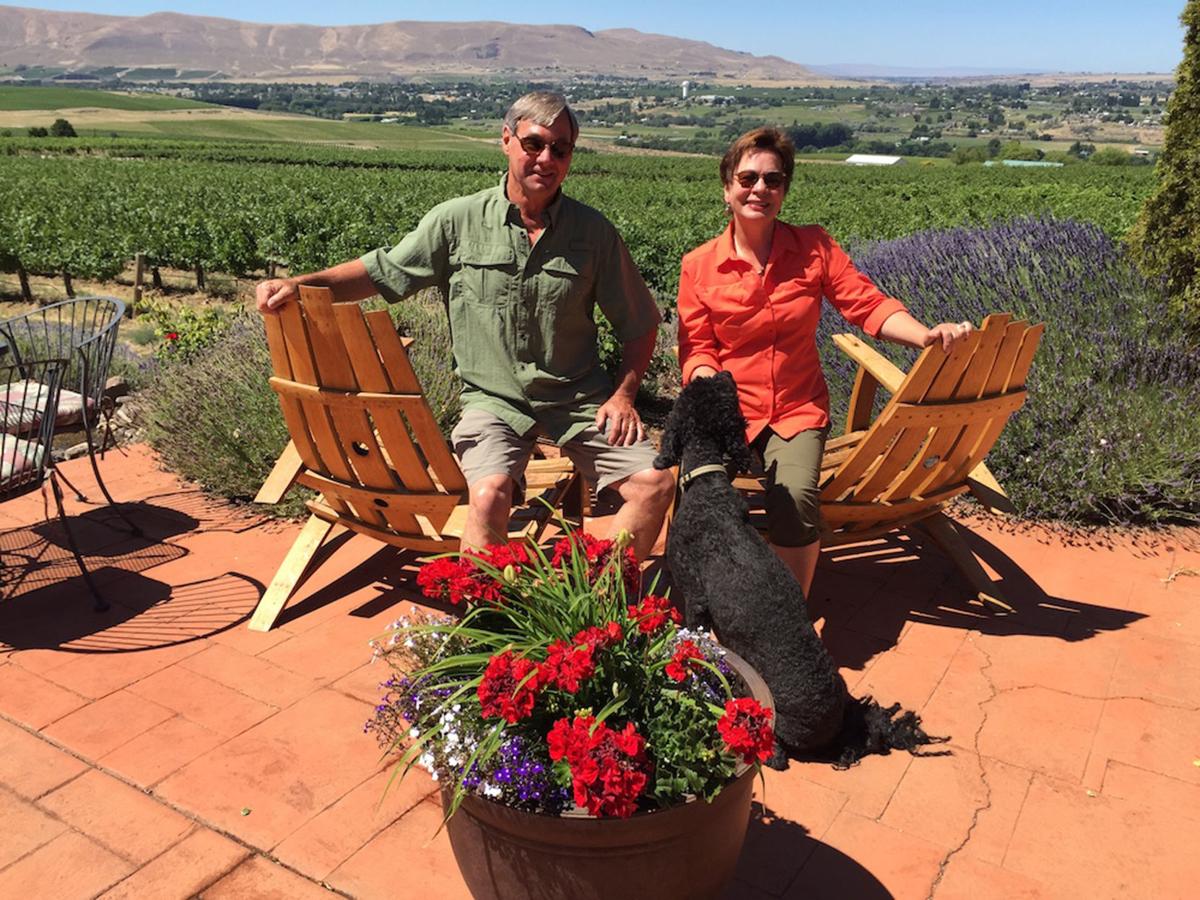 Victor Palencia pays tribute on bottles of his Cabernet Sauvignon to his father, David, who is symbolized on the label with a shovel and the name El Viñador, which translates to “winegrower.” (Photo courtesy of Palencia Wines)

Victor Palencia pays tribute on bottles of his Cabernet Sauvignon to his father, David, who is symbolized on the label with a shovel and the name El Viñador, which translates to “winegrower.” (Photo courtesy of Palencia Wines)

YAKIMA, Wash. -- A question often asked by lovers of Northwest wine is how Red Mountain got its name. After all, it’s not much of a mountain, and it’s brown.

In fact, the nearby town of Kiona is a native word for “brown hills,” which appropriately describes the nearby Rattlesnake and Horse Heaven Hills. But “Brown Hill” isn’t nearly as marketable a name as Red Mountain.

From a wine perspective, there are plenty of other reasons for the name. For example, of the 2,338 acres of wine grapes planted on the 4,000-acre area, red varieties dominate, leading with cabernet sauvignon taking up more than half of the acreage.

Red Mountain is one of the warmest growing regions in the Columbia Valley and receives a scant 6 inches of precipitation annually.

The real reason behind the name makes itself apparent each May, when the cheatgrass that grows on the hill turns red for a few weeks. While late spring is the right time to visit Red Mountain to see it when it’s red, any time is appropriate to taste some award-winning red wines.

Here are some Red Mountain wines we’ve tasted in recent weeks. Ask for them at your favorite wine shop or contact the winery directly.

Upchurch Vineyard 2015 Cabernet Sauvignon, Red Mountain, $75: Chris and Thea Upchurch live part time among their young vines along the southern slopes of Red Mountain, and their relationship with vaunted viticulturist Dick Boushey continues to showcase remarkable synergy. A small percentage of merlot (9 percent) adds to the power, while the 100 percent new French oak barrels bevel the edges, making for a drink that’s akin to a slice of triple berry pie with cassis, orange oil and white pepper.

The 2014 vintage earned best of class last fall at the 2017 Platinum Judging for Wine Press Northwest, and this seems headed along a similar track.

Henry Earl Estates 2015 Merlot, Red Mountain, $38: Decorated vineyard manager Marshall Edwards, this year’s honorary grower for the Auction of Washington Wines, lords over the vines on the upper reach of Red Mountain for Dick and Wendy Shaw. Their wine club in Walla Walla gets first crack at these wines, and this is about to become available.

A blend of Shaw and Obelisco vineyards, it’s loaded with black cherry, plum and chocolaty notes. Nicely managed tannins and blueberry acidity make for a finish that’s youthful and juicy.

It’s a luscious wine with surprisingly smooth tannins that lead to a long, memorable finish. It won a gold medal and best in class at the 2017 Wenatchee Wine Awards.

Tapteil Vineyard Winery 2015 Estate Grenache, Red Mountain, $38: Larry Pearson grows some of Red Mountain’s best fruit for a number of the Northwest’s top winemakers, but he doesn’t sell all of his prime grapes.

Grenache is a recent addition at Tapteil, which Pearson began to transform from a campsite into a vineyard back in 1985, and he continues to prove Red Mountain’s versatility with this, which opens with aromas of cherry juice, dusty herbs and a freshly opened bag of Strawberry Twizzlers.

Fruit from the Williams family of Kiona fame, as well as historic Klipsun and emerging Quintessence vineyards, has contributed to Canvasback along the way, and the warm 2014 vintage allowed vineyard manager Dick Boushey to get both the cabernet sauvignon (80 percent) and merlot (20 percent) off by Sept. 30.

Murray 2014 Syrah, Red Mountain, $25: When Tim and Kelly Hightower first planted on Red Mountain in 2005, they began with the five primary Bordeaux varieties. Not long after, Tim’s mother, Jackie, moved nearby and planted 2 acres of syrah and few vines of viognier. So this co-fermented syrah from J Hightower Vineyard fits alongside Hightower Cellars’ sister label, which serves as a living tribute to their late four-legged companion, Murray.

This syrah is a remarkable collection of savory and leather notes backed by ample fruit such as blackberry, elderberry and dark cherry.

Palencia Wine Co. 2013 El Viñador Cabernet Sauvignon, Red Mountain, $50: Victor Palencia’s reserve-style wines are created as a tribute to his father, David, who is symbolized on the label with a shovel and the name El Viñador, which translates to “winegrower.”

The fruit source for this prized cab off Red Mountain is off Shaw Vineyards, owned by Victor’s longtime supporter Dick Shaw. Engaging aromas of strawberry jam, cassis and Sugarfina Finnska Red licorice include baking spices and vanilla from the 26 months in French oak.