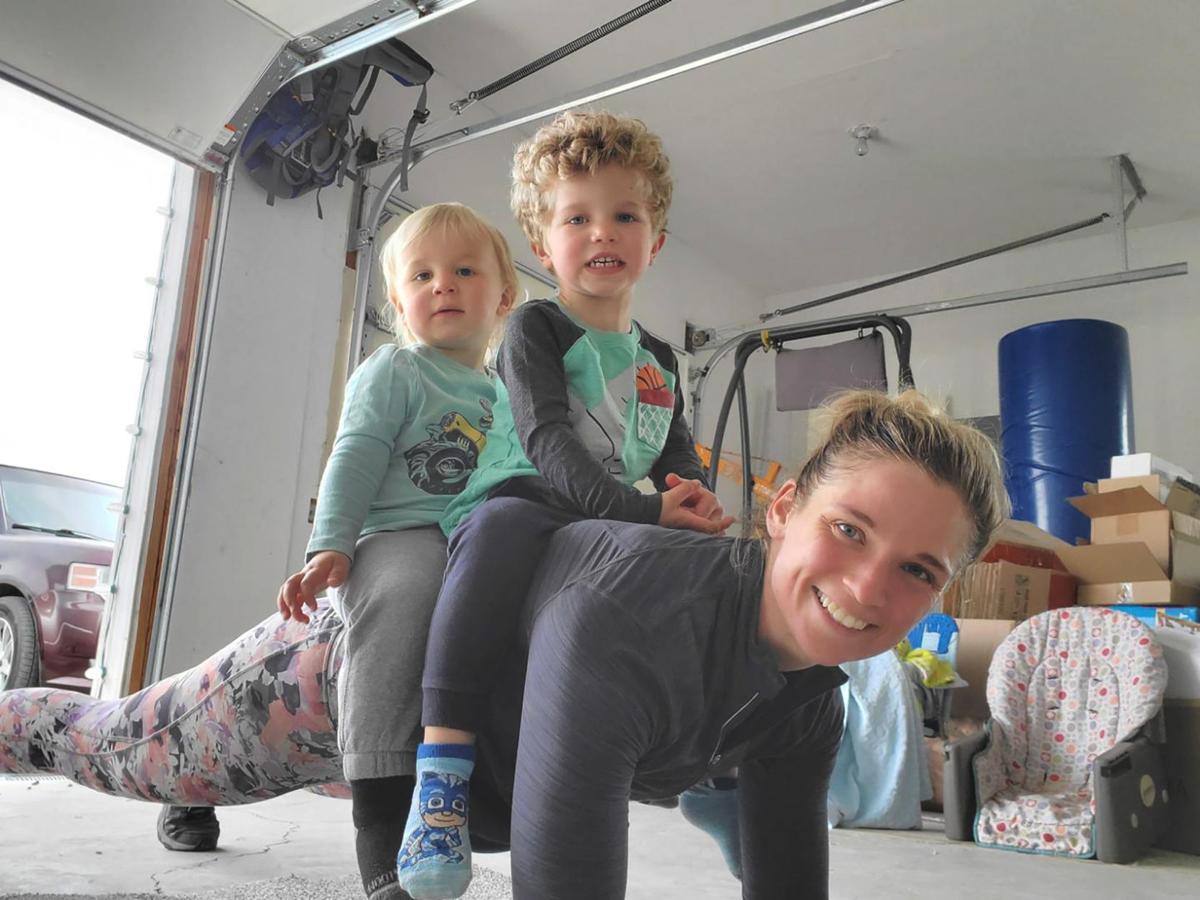 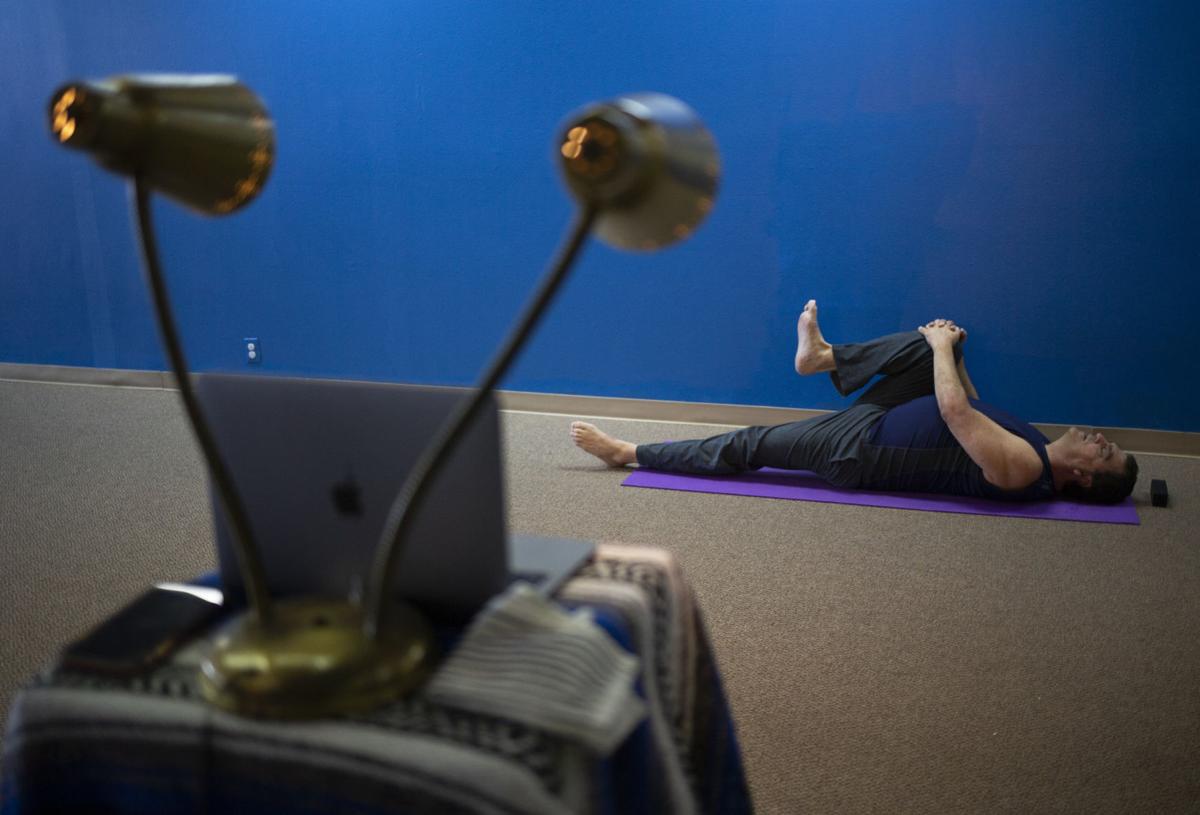 David Lynx leads his seven spiritual laws of yoga class through a livestream at the Yoga Collective of Yakima on Tuesday, June 23, 2020 in Yakima, Wash. 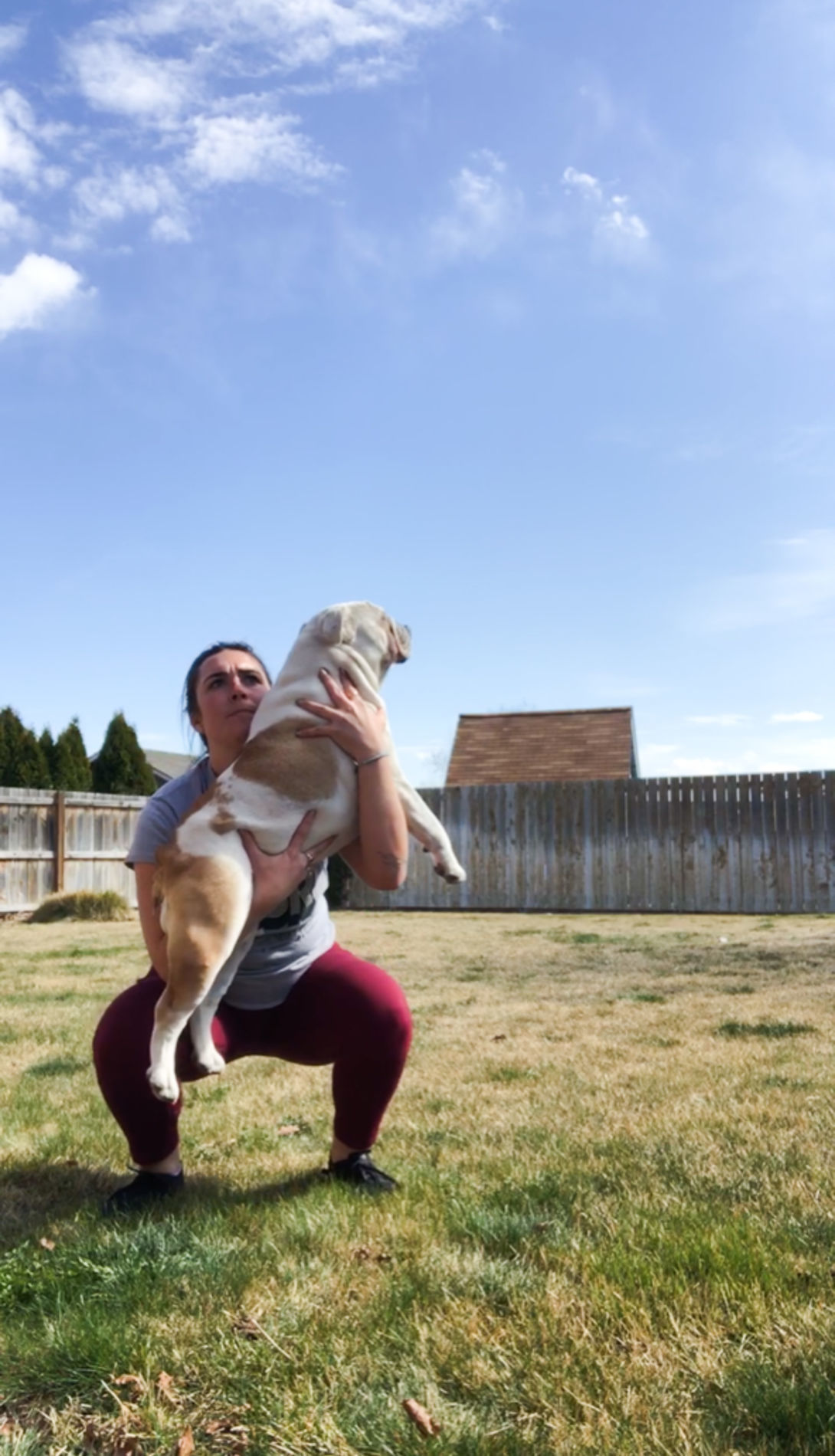 Kendyl Comiskey performs a goblet squat with her dog, Jazz, during a home workout. 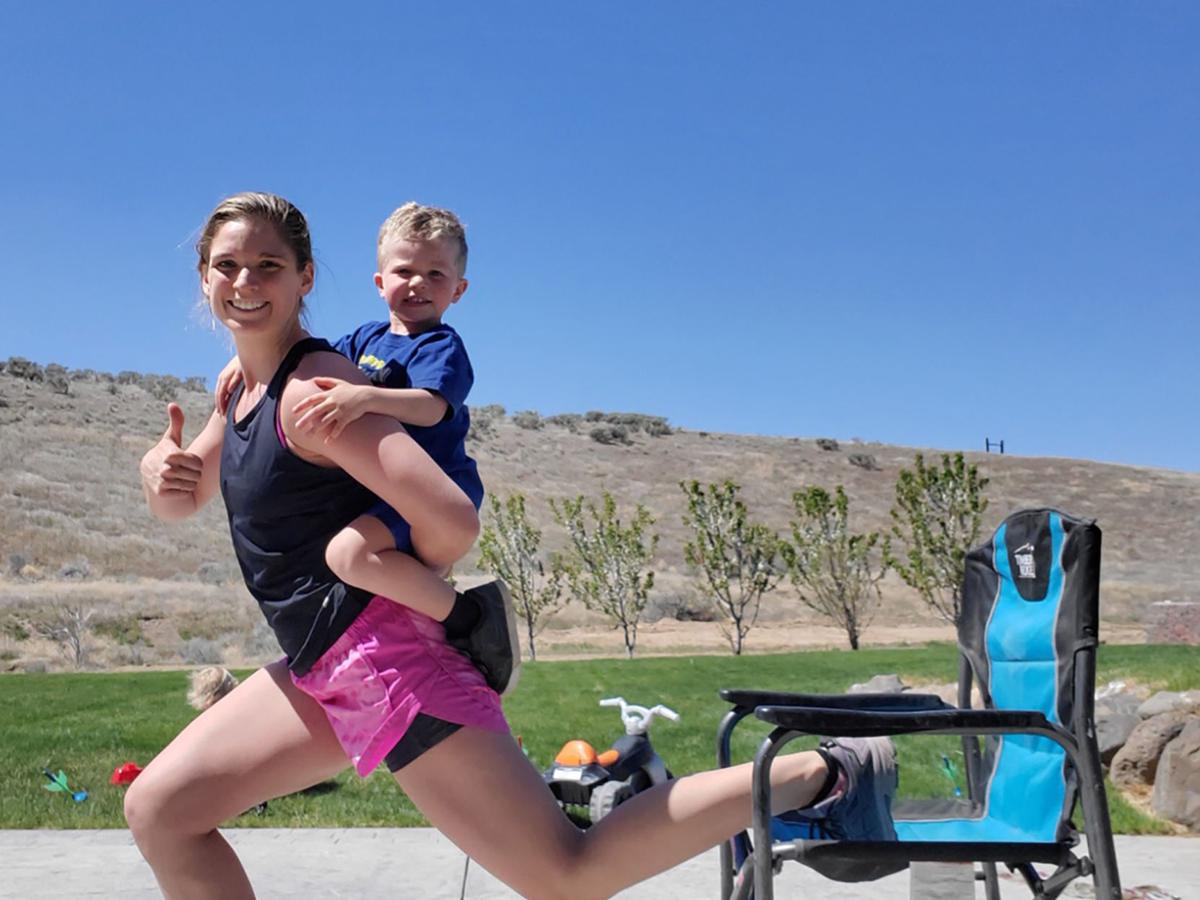 David Lynx leads his seven spiritual laws of yoga class through a livestream at the Yoga Collective of Yakima on Tuesday, June 23, 2020 in Yakima, Wash.

Kendyl Comiskey performs a goblet squat with her dog, Jazz, during a home workout.

Milk jugs, pallets of water bottles, pets and small children are just a few of the objects filling in for weights while people can’t access gyms during the coronavirus pandemic.

Yakima Athletic Club trainer Kendyl Comiskey said she’s seen pictures of people lifting all of those things and more, noting the only real requirement for a good workout is finding something that weighs the right amount. For those who’d prefer to work out with others, online classes with local personal trainers and yoga instructors provide options to stay fit until it’s safe to return to a more normal environment.

“The same goals that we had when we were training in person are different now,” said Comiskey, a 2013 West Valley graduate who earned a degree in kinesiology from Western Washington University. “We can’t expect them to do the same quality of work if we’re not there.”

David Lynx said that also holds true for the classes he teaches from home as an instructor for the nonprofit Yoga Collective of Yakima. He prefers Zoom calls since they offer at least some interaction, but many people can still enjoy a good workout by watching Lynx’s videos on their own time after they’ve been recorded.

“Mainly what the Zoom has is I want to make sure they can hear me,” Lynx said. “If I can see them responding to me, then everything is fine.”

Virtual classes also give organizations a chance to expand their audiences, since they’re free and open to anyone. Comiskey said kettle bell classes that cost extra for members when held in person draw 13 to 18 people at 7 a.m. three times per week, and Lynx sees around 10-12 people watching at a time.

The director of Yakima Valley College’s Larson Gallery teaches weekly classes for regular yoga and yoga nidra, a form of meditation. Participants in the latter only need room to lie down, and Lynx said the chance to relax helps quell anxieties brought about by the ongoing pandemic.

Joel Church prefers to relax by running whenever he can, whether that’s during lunch breaks at the Hanford site or on the hills around his home near Moxee. He totaled 91 miles in a week earlier this month, beating his personal record by nearly 20 miles.

“It’s turned into something I look forward to and plan on doing, and it’s also my time to just be free and let my mind wander and do what it wants,” Church said. “A lot of the times it’s kind of like a meditation when I’m running.”

Without any races, he’s found other sources of motivation, such as the weekly leaderboard posted on The Hard Core Running Club Facebook page that now features almost 100 runners. Church also achieved his goal of running the equivalent of the canceled Yakima River Canyon Marathon in under four hours, and he completed a 50-mile course with about 8,500 feet of elevation.

Comiskey has added much more road biking to her usual routine, which also includes following along with the YAC’s small group training workouts. The club offers its popular Les Mills training workouts almost every day along with body pump and body combat workouts, a boot camp comprised of only body weight exercises, and a weekly stronger living class for older adults.

“It’s hard to find motivation when you’re not around your typical gymgoers who are after the same type of goals,” Comiskey said, noting many trainers have kept in touch with their clients and have sent out weekly workouts. “Our members and friends said it’s made a huge difference even being able to join these calls.”

The Yoga Collective of Yakima has seen a similar response, and Lynx said participation from many people outside the area could mean online classes continue after the organization opens its doors again. Director Marsha Threlkheld noted they offer 105 yoga, meditation or yoga nidra classes through their video library, along with one or two classes live online every day, some of which are taught in Spanish as well as English.

Looking ahead, Threlkheld expects the collective to teach some small classes in Phase 2 and offer some outdoor options, potentially including Lynx’s classes at Wilridge Winery. Gyms like the Athletic Club could return to one-on-one instruction and classes of five people or less, but Comiskey said most of their facilities won’t reopen to the public Yakima County is in Phase 3.

Even when people can finally take their workouts from home to more public places, things will likely look a little different for a while. Following safety guidelines could lead to some creative solutions for difficult questions, such as how to wear masks while performing yoga, which emphasizes the importance of deep breathing.