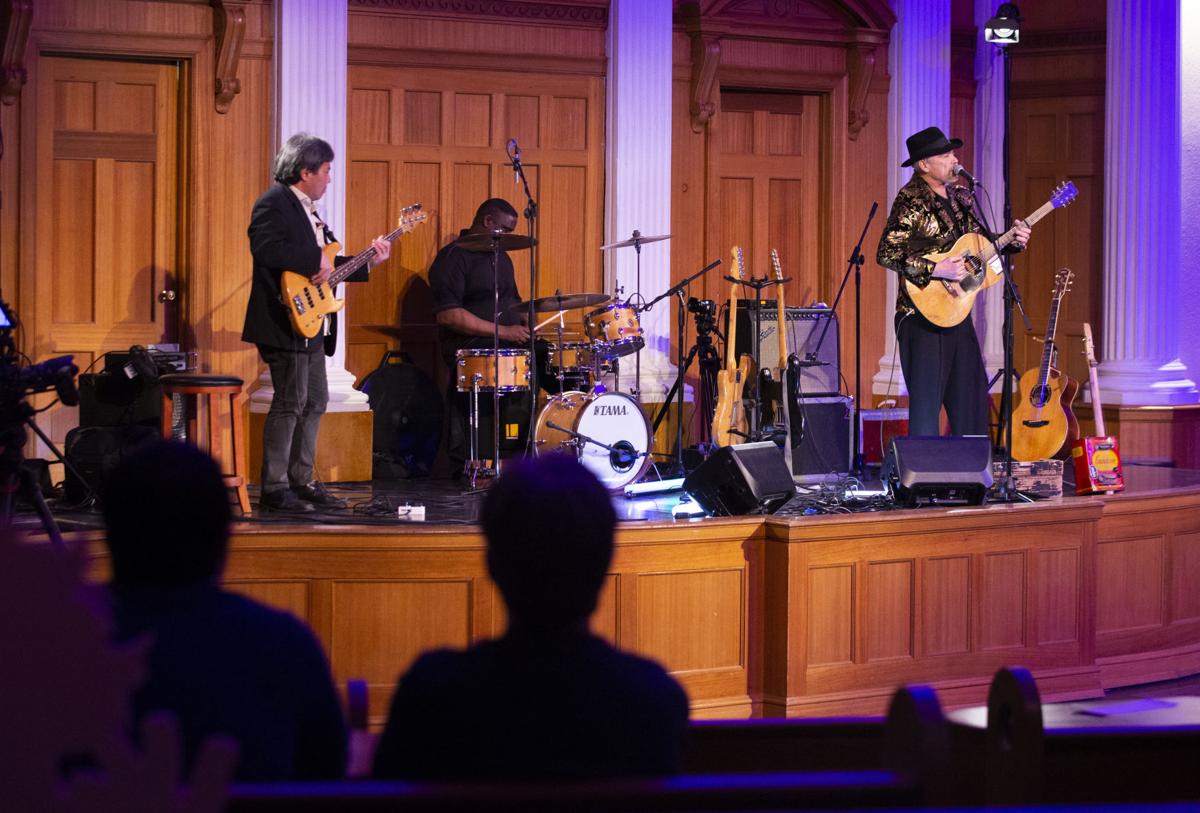 Nick Vigarino is joined by his band on stage while performing on Saturday, March 6, 2021 at The Seasons Performance Hall in Yakima, Wash. 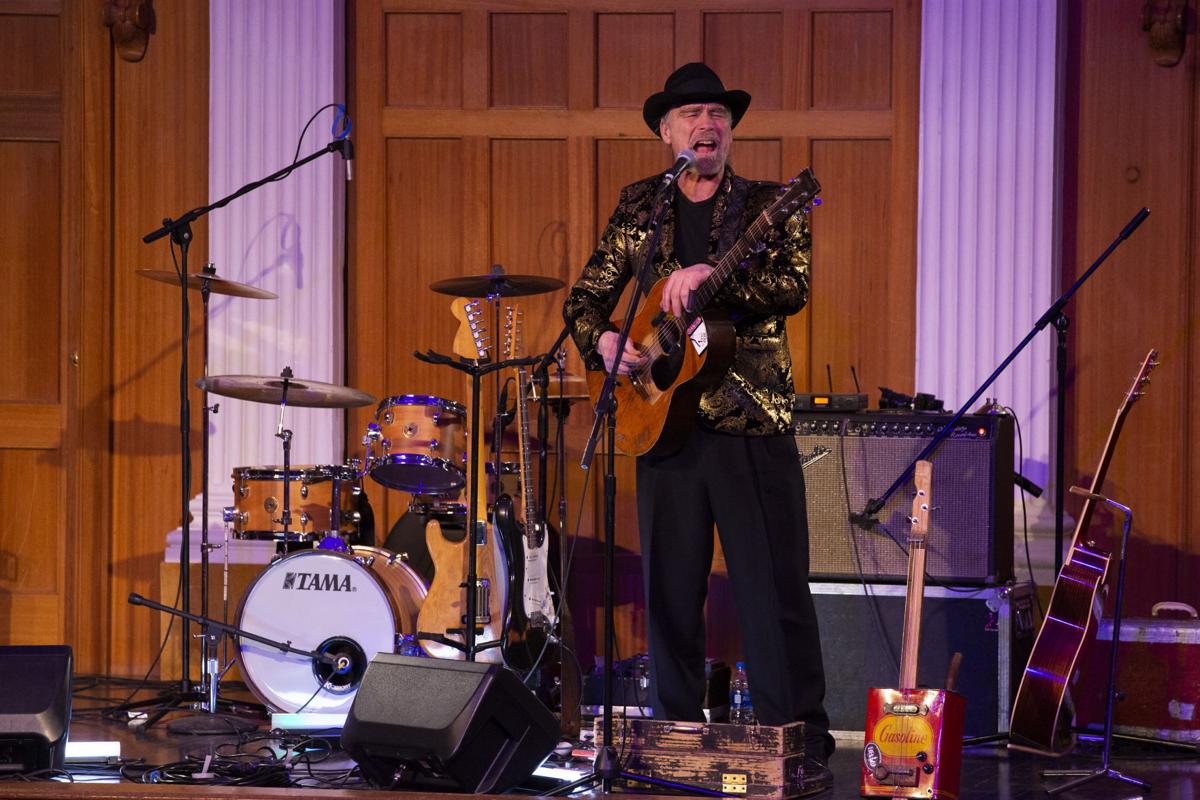 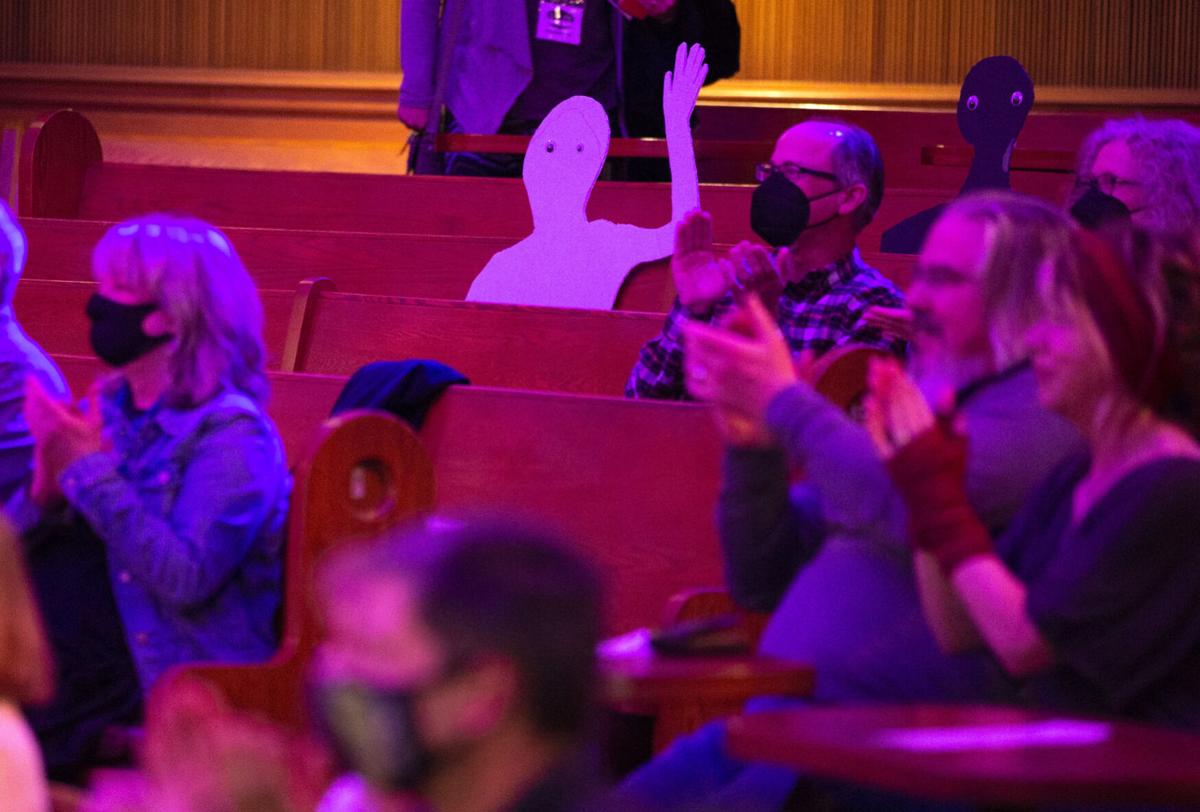 Cardboard cutouts fill space between concertgoers during a Nick Vigarino concert on Saturday, March 6, 2021 at The Seasons Performance Hall in Yakima, Wash. 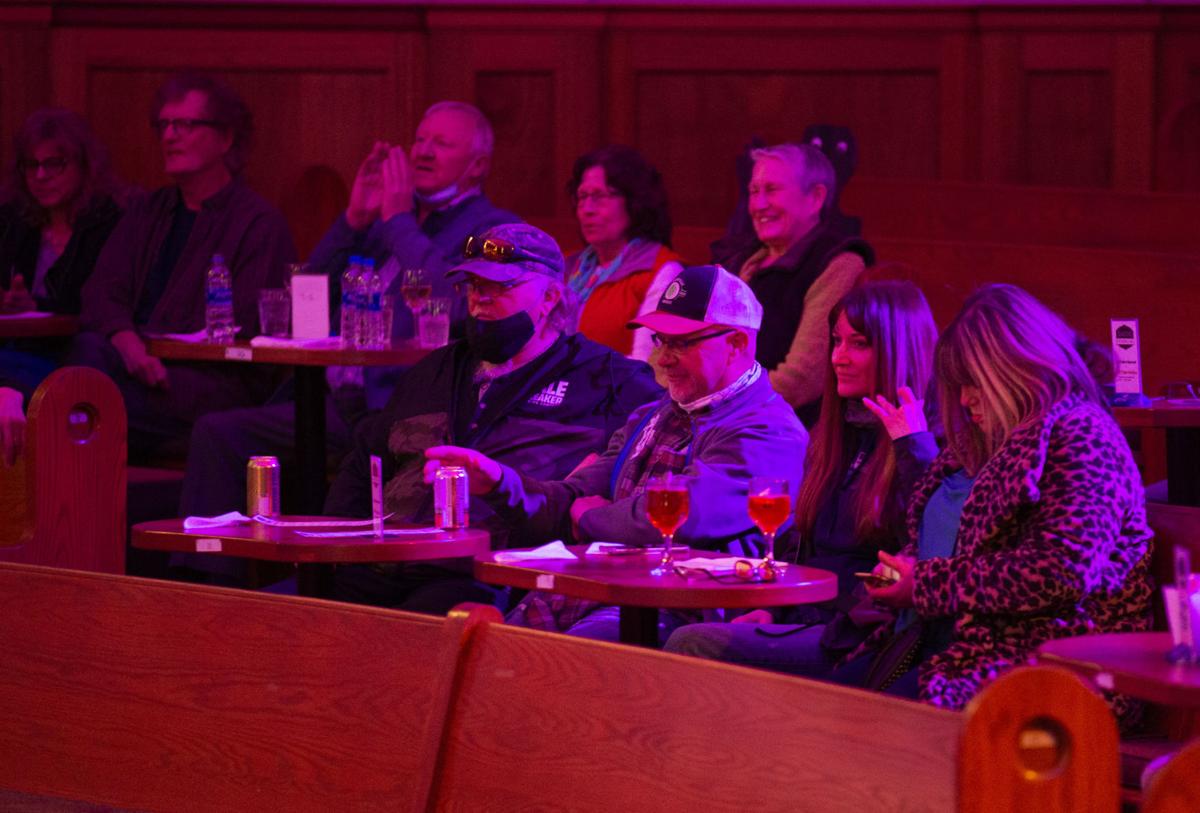 People have drinks while watching Nick Vigarino perform on Saturday, March 6, 2021 at The Seasons Performance Hall in Yakima, Wash. 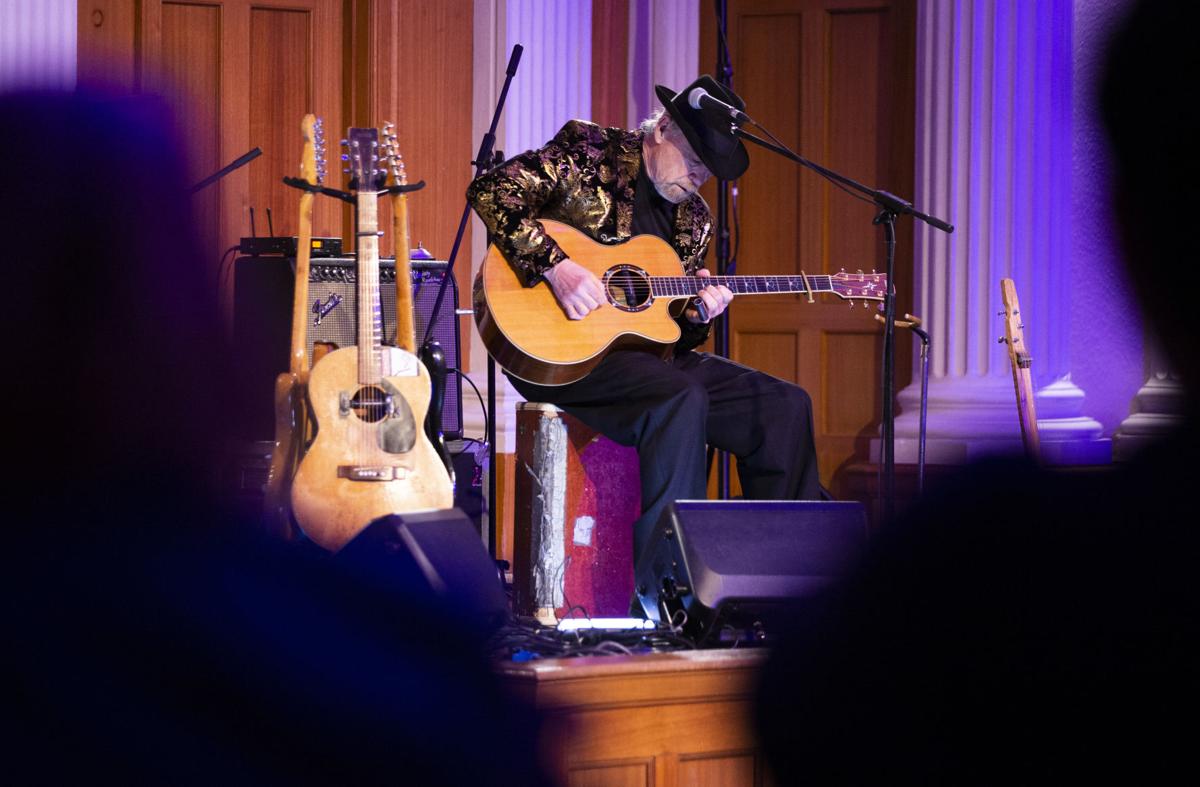 Nick Vigarino is joined by his band on stage while performing on Saturday, March 6, 2021 at The Seasons Performance Hall in Yakima, Wash.

Cardboard cutouts fill space between concertgoers during a Nick Vigarino concert on Saturday, March 6, 2021 at The Seasons Performance Hall in Yakima, Wash.

People have drinks while watching Nick Vigarino perform on Saturday, March 6, 2021 at The Seasons Performance Hall in Yakima, Wash.

I went to a concert a couple of weeks ago.

It was the Seattle Repertory Jazz Orchestra doing selections from (and related to) Miles Davis’ “Birth of the Cool” at The Seasons Performance Hall. It was my first concert in a little more than a year. It was Yakima’s first sanctioned concert in nearly a year. It was overwhelming.

I had to tamp down my COVID-conditioned flight response just to be there. Aside from supermarket trips, it had been a year since I’d been indoors among that many people. It felt weird. It also felt exciting, thrilling even. Maybe it was all in my head, but I got the sense that everyone there felt that way. Like we were all in on this dangerous, transgressive secret.

This was the first sanctioned concert with an audience since The Before Times, and it was invite-only — basically just board members, donors and press. (The following weekend, The Seasons reopened its doors to the public for a concert by blues guitarist Nick Vigarino.) Capacity was limited. Socially distant seating was assigned. A venue volunteer occasionally reminded people to keep their masks on. (This seemed prudent given that, aside from the pianist and bassist, everyone in the socially distanced nonet was blowing on an instrument that would distribute aerosolized particles.) So it wasn’t anywhere near “normal,” or what that used to mean anyway.

But the music still worked. The group was engaging between songs and did justice to some of the 20th century’s best compositions. I’d have enjoyed it five years ago. But, man, did I enjoy it more now that I knew not to take it for granted. Cast against the backdrop of the past year, the feeling of being in the concert hall as artists created a beautiful shared experience, was profound. This is what we’ve been missing. THIS.

I wasn’t alone in feeling that way. Having hosted two live-audience shows in the past month, Seasons Executive Director Pat Strosahl has seen how deeply people have been affected by live music’s return.

“One of the things that has really happened is that people have seen how music and the arts, which seem like just entertainment, are actually the vital juice of our lives,” Strosahl said.

Still, my wife and I hustled out of there when the Seattle Repertory Jazz Orchestra stopped playing, uncomfortable with the idea of milling around among people. I’m not sure when that feeling will fully subside. Live music with an in-person audience is legal again in Washington state, provided the venue adheres to capacity restrictions and other mandates. And The Seasons, as far as I could see, appears to be doing things right. But COVID is still out there, and attending events still requires a risk-benefit analysis.

So far The Seasons, 101 N. Naches Ave., is the only music venue (I know of) that’s brought audiences back. Bearded Monkey Music, 1802 W. Nob Hill Blvd., likely isn’t far behind, according to owner Lance Reese. Like The Seasons, it has established a livestream series to fill the gap during the pandemic and has that momentum going as it transitions back into live audiences.

“Ultimately we will slowly work toward full-

capacity crowds, with a focus on producing the audio and video from the event for the artist, including continued livestreams,” Reese said. “Limited VIP invite-only attendance at first, then openly ticketed as things continue to open up toward summer.”

Larger venues such as the Yakima Valley SunDome and The Capitol Theatre don’t have any such plans. It will be at least September before The Capitol hosts anything, venue CEO Charlie Robin said.

“There would have to be a significant turnaround in COVID statistics to warrant restarting our operations at a level that would make it affordable enough for us to be covering all the operational components required to pull off events amid all the restrictions for spaces of our size,” he wrote in an email.

The Seasons, a smaller nonprofit venue in a repurposed church, can make it work because the pew-and-aisle setup allows for easier distancing than theater seats do, Strosahl said. And there are 10 VIP tables near the front. So far only the tables have been open to ticket buyers, but there is room for the venue to open up more seating and still operate within the state’s social distancing and 25% capacity restraints, he said. It’s been a slow rollout, because no one knew how it would work or whether guests would cooperate with the new rules.

“Just to be sure, we didn’t want to come back like, ‘Everybody come into the bar; let’s have a good time,’” Strosahl said.

Reese expressed similar sentiments, noting that some of the bands he’s talked with have their own concerns. They’ve been quarantined like everyone else, and while they want to get back on stage they don’t want to risk their health in doing so.

“There’s a moral responsibility that we still keep everyone safe and we create an environment that’s safe regardless of what’s legally allowed,” he said.

That mix of excitement and caution is going to underline all facets of public life as more of the population gets vaccinated and the virus transmission numbers dwindle over the course of this year. That’s healthy, Strosahl said. There needs to be caution. But the excitement is warranted, too. Being able to buy a ticket and watch a performance is a good sign. It means we’re on our way back.

“At both concerts there was a uniform expression of relief and a feeling that we’ve held our breath for a year,” Strosahl said. “Now we can breathe.”