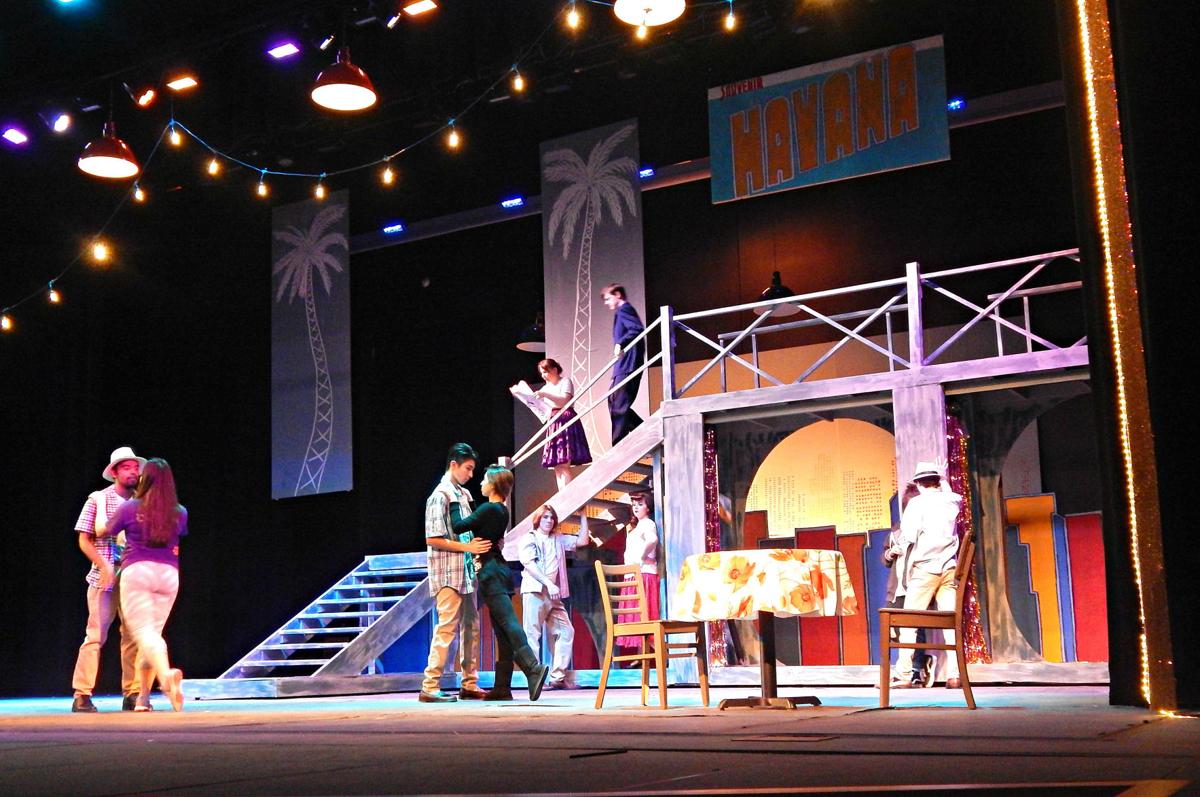 Kaya Luppino, playing the part of Sarah Brown, and Tanner Adkison, as Sky Masterson, rehearse a scene where they travel to Havana, Cuba as the Cuban dancers greet them with an alluring dance during a dress rehearsal of “Guys and Dolls” at Eisenhower High in Yakima, Wash.. (Photo courtesy Sabrina Hutton) 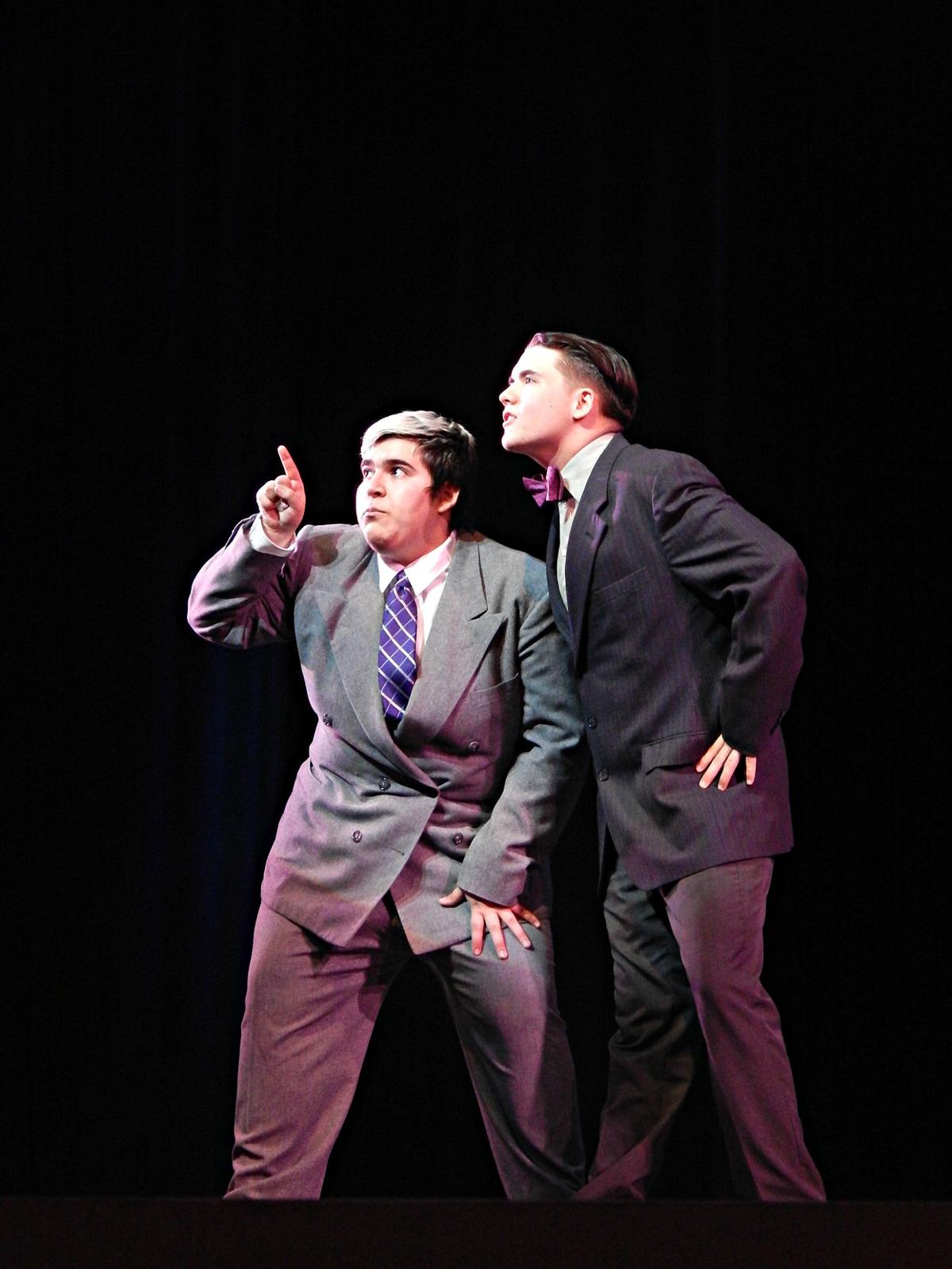 Alberto Lechuga playing the part of Nicely Nicely, and Dawson Kirschner, as Benny Southstreet, sing a lively song about gangsters falling in love during a dress rehearsal of “Guys and Dolls” at Eisenhower High in Yakima, Wash. (Photo courtesy Sabrina Hutton)

Kaya Luppino, playing the part of Sarah Brown, and Tanner Adkison, as Sky Masterson, rehearse a scene where they travel to Havana, Cuba as the Cuban dancers greet them with an alluring dance during a dress rehearsal of “Guys and Dolls” at Eisenhower High in Yakima, Wash.. (Photo courtesy Sabrina Hutton)

Alberto Lechuga playing the part of Nicely Nicely, and Dawson Kirschner, as Benny Southstreet, sing a lively song about gangsters falling in love during a dress rehearsal of “Guys and Dolls” at Eisenhower High in Yakima, Wash. (Photo courtesy Sabrina Hutton)

YAKIMA, Wash. -- Set in 1940s New York, “Guys and Dolls,” which begins a run of eight shows tonight at Eisenhower High School, is about a young group of well-known crapshooters and their significant others. This musical by Jo Swerling and Abe Burrows, with musical arrangement by Frank Loesser, transports viewers to a time period with flashy chorus girls and rowdy gamblers.

Today, American teenagers lamentably live in a millennial world where knowledge of the mid-20th century is not often pursued by peers. Fortunately, Eisenhower is bringing this fascinating time period front and center.

“Guys and Dolls” tells two stories. One concerns a well-known gambler, Sky Masterson, who falls madly in love with a Bible-thumper, Sarah Brown. The other story involves another slightly untrustworthy gambler, Nathan Detroit, who has been engaged for 14 years to Miss Adelaide, a popular showgirl at the Hot Box Club.

Nathan runs a well-established mobile craps game and is on the lookout for a secure home for the game while being romantically implored by Adelaide, who hopelessly tries to convince him to marry her. Meanwhile, Sarah, who’s blaming Sky for supposedly hosting an illegal game at her mission, tries to dismiss her love for him.

For me, it’s been an interesting experience getting to play the role of Adelaide this year; she’s a comedian and a hopeless romantic, which I can relate to well.

“I absolutely love the energy in this show — how fast-paced it gets, how funny and lighthearted it is,” said Ike sophomore Melody Reed, who plays a Hot Box girl. “The characters are absolutely darling, and will have you laugh out loud in your seat.

“The numbers are a sight to see; the music and choreography are fabulous and fun. It’s fun for the audience and the players, making it a delightful show to witness.”

“Guys and Dolls” mostly revolves around the four leads and their love stories. First, you have Brown, who seeks true love and believes it’s something she can’t achieve with Masterson. “There are a lot of old jokes and old types of humor that the adult audiences should look forward to, especially the comedic love story going on between the four leads, which will probably spark some laughs and smiles from the audience,” said Kaya Luppino, the Ike senior who portrays Brown.

And then you have Adelaide, who wants to finally be married to Detroit, played by Ike senior DJ Van De Venter, but he just wants to run his craps game.

“I might be a bit biased, but I think the relationship between the love interests are entertaining to see unfold and develop throughout the show,” said Ike senior Tanner Adkinson, who plays Masterson.

Twenty-five years ago, Davis and Eisenhower high schools combined their theater programs to put on a production of “Guys and Dolls.” That 1992 performance was the only time that Ike and Davis have united on one production.

Jon Hardy, an Ike senior that year, played Arvide Abernathy, a caring older gentleman and grandfather of Sarah Brown. Hardy is reprising the role for Ike’s new production after being sought out by Eisenhower’s musical director, Laurel Moore.

“The biggest difference between this production and the one 25 years ago is the cast, crew and orchestra,” Hardy said. “Working at the Davis Auditorium was a chance for those of us from Ike to perform on a significantly larger stage. I remember being kind of overwhelmed the first time I stepped out on that stage. It was an eye-opening experience to see all the moving lines (rigging system) above my head and all those seats.”

Until that time, Hardy had performed only at the Ike Little Theatre or the Warehouse Theatre. “I remember thinking how small I felt in that huge room,” he said.

I also talked to his 1992 Eisenhower co-stars, Alison Akin, who played Adelaide, and Chad Jennings, who played Masterson; both were seniors at the time.

“I think people really love the idea that ‘tough guys’ like Nathan Detroit and Sky Masterson have a soft and squishy heart on the inside. There’s something interesting about that concept. It makes for an intriguing story,” Akin said.

“I believe that people do relate with these characters. Sarah sees another side of someone that she had judged quickly as being a degenerate. This story kind of teaches that people from polar opposite backgrounds and beliefs can find friendship and even love.”

Jennings is making his Broadway debut as Dr. Dillamond in “Wicked.” Earlier in his career, he toured nationally with “War Horse” and “South Pacific.”

“High school theater did a lot for me. I was (and still am) a bit shy. Having that outlet in drama class really helped open me up to communicating with others,” said Jennings, who lives about 1,000 feet or so from Times Square.

“It helped me accept the things about me that make me ‘me.’ I kind of think they should make it a full-on requirement in high school (or at least in college). The theater is a gym for empathy, and I think we all could stand to do a few reps now and then. The sooner you start exercising, the more options you’ll have down the line.”

Jennings said he still feels guilty because he had auditioned for (and been cast in) Ike’s production of “Black Comedy,” then auditioned for “Guys and Dolls.”

“For some reason I thought I could do both,” he said. “I most enjoyed that we did a co-production with Davis.

“In high school there was so much irrational rivalry between schools, and this project was one that reminded us that we’re all just people.”

• Sierra Hutton, a junior at Eisenhower High School and a member of the Yakima Herald-Republic’s Unleashed program for teen journalists, plays the role of Adelaide in the Ike Players’ “Guys and Dolls.”

WHAT: “Guys and Dolls,” performed by the Eisenhower High School Ike Players.

TICKETS: $10 for adults, $5 for students with ASB and senior citizens.

BRING THE KIDS? Parental guidance is recommended; not suitable for very young children.