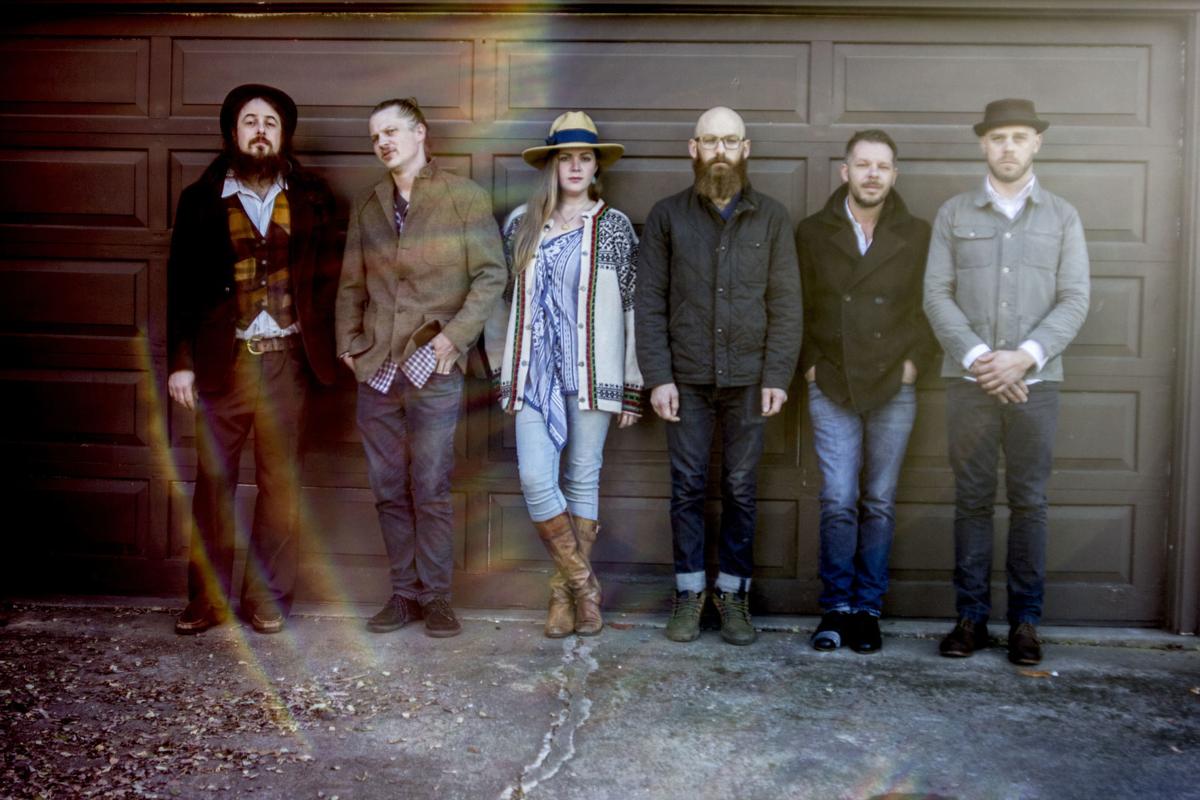 Ezra Bell is the headliner at Saturday’s Fresh Hop Ale Festival. Their music is great, but good luck trying to describe it. Also playing are Bart Budwig, near right, and Bodies on the Beach, far right. 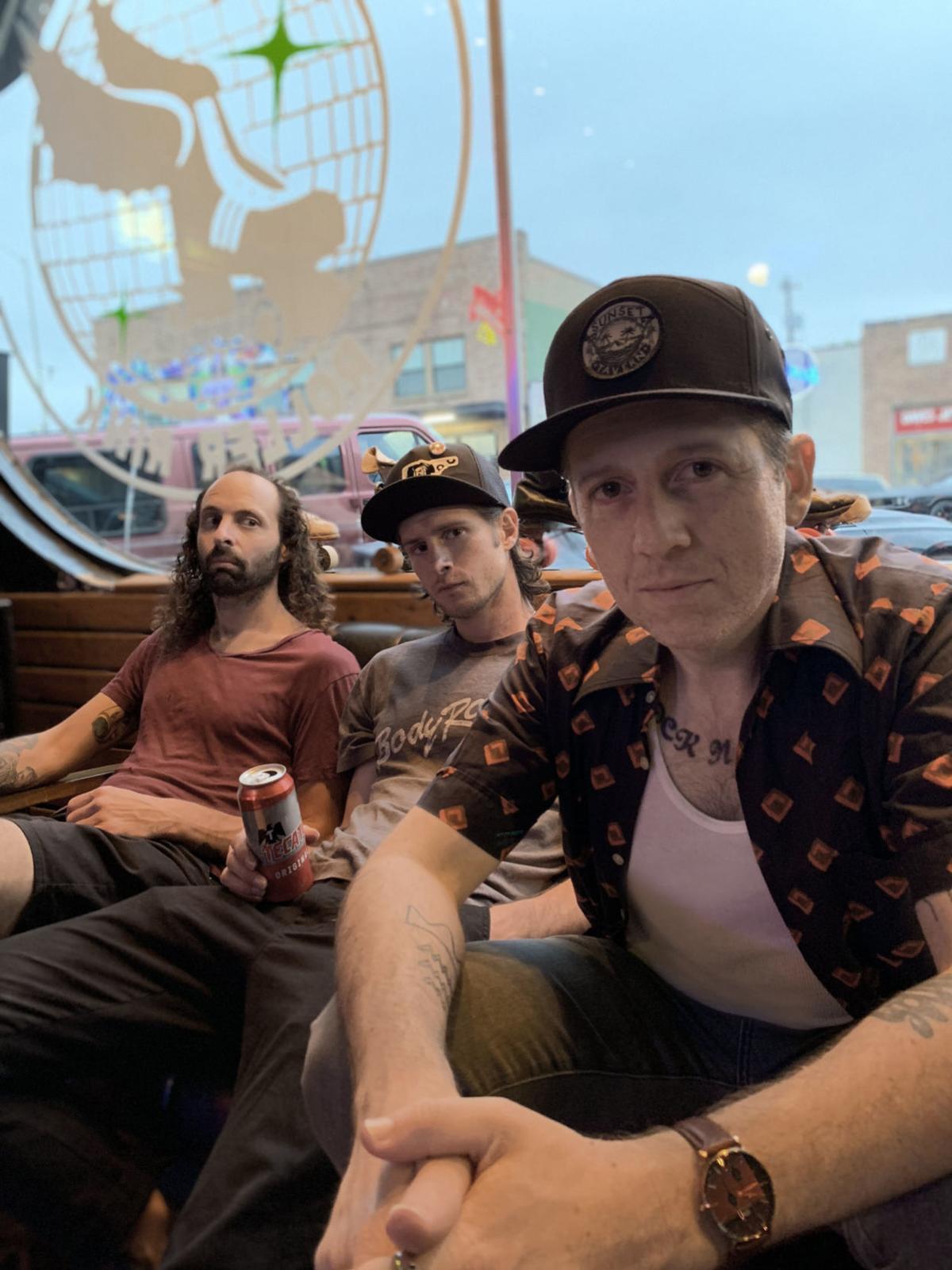 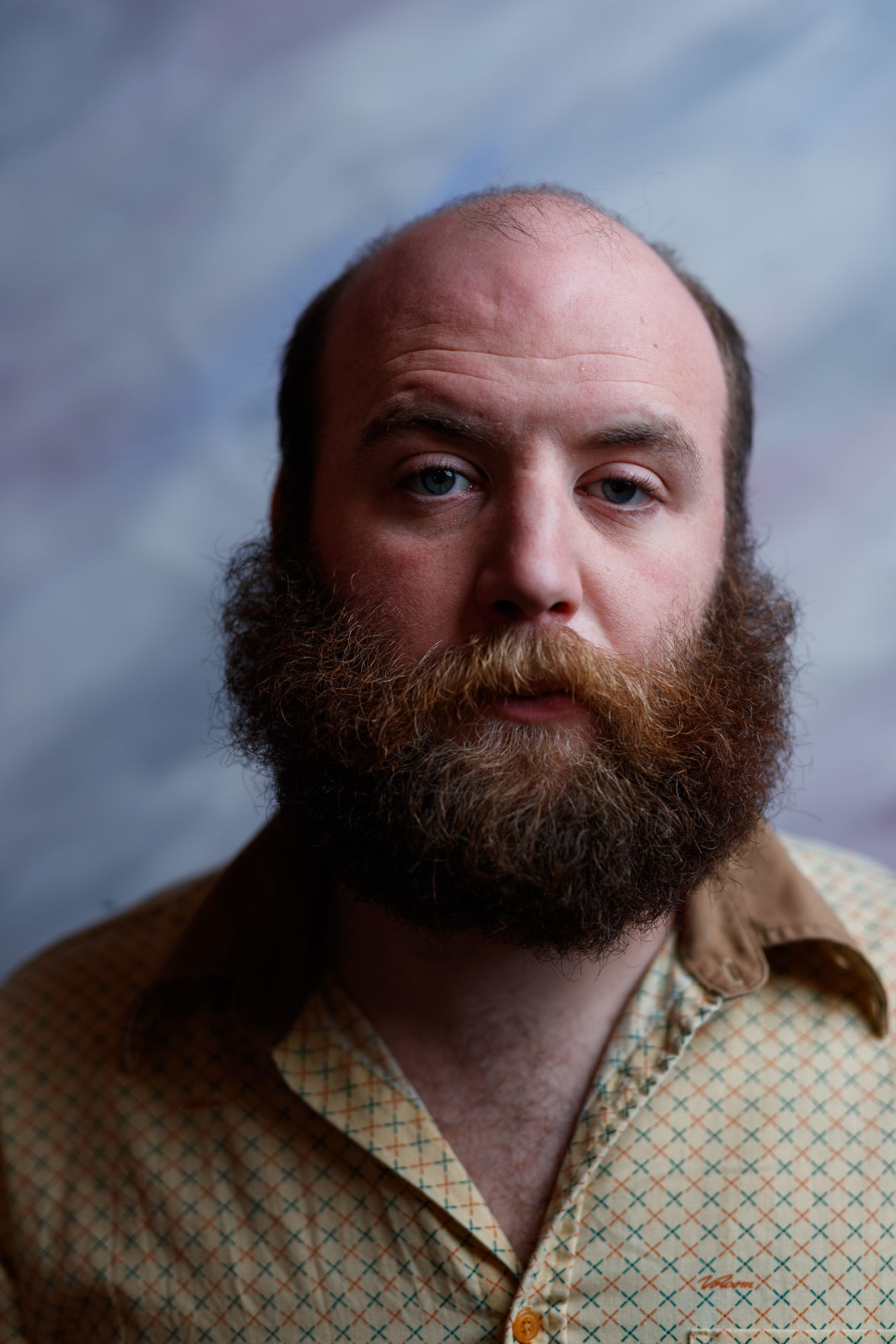 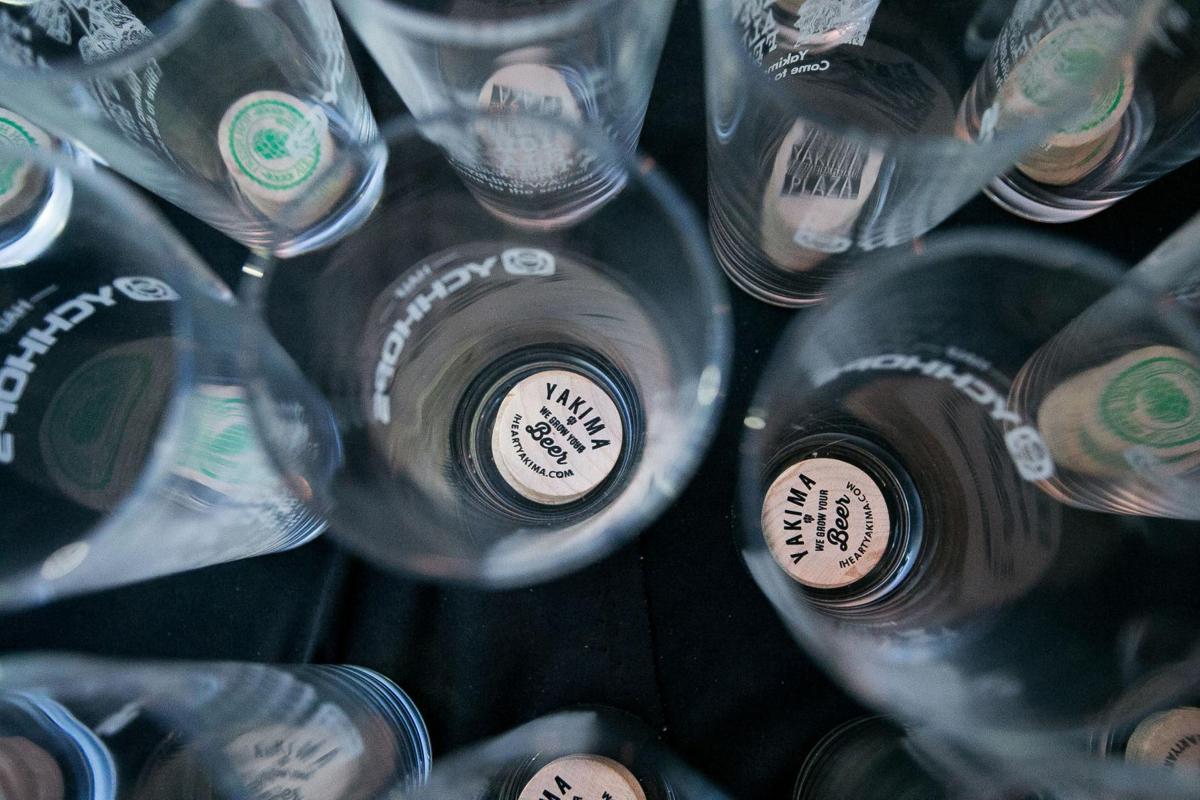 Beer is lined up at the 2017 Fresh Hop Ale Festival, then held at Millennium Plaza in downtown Yakima. 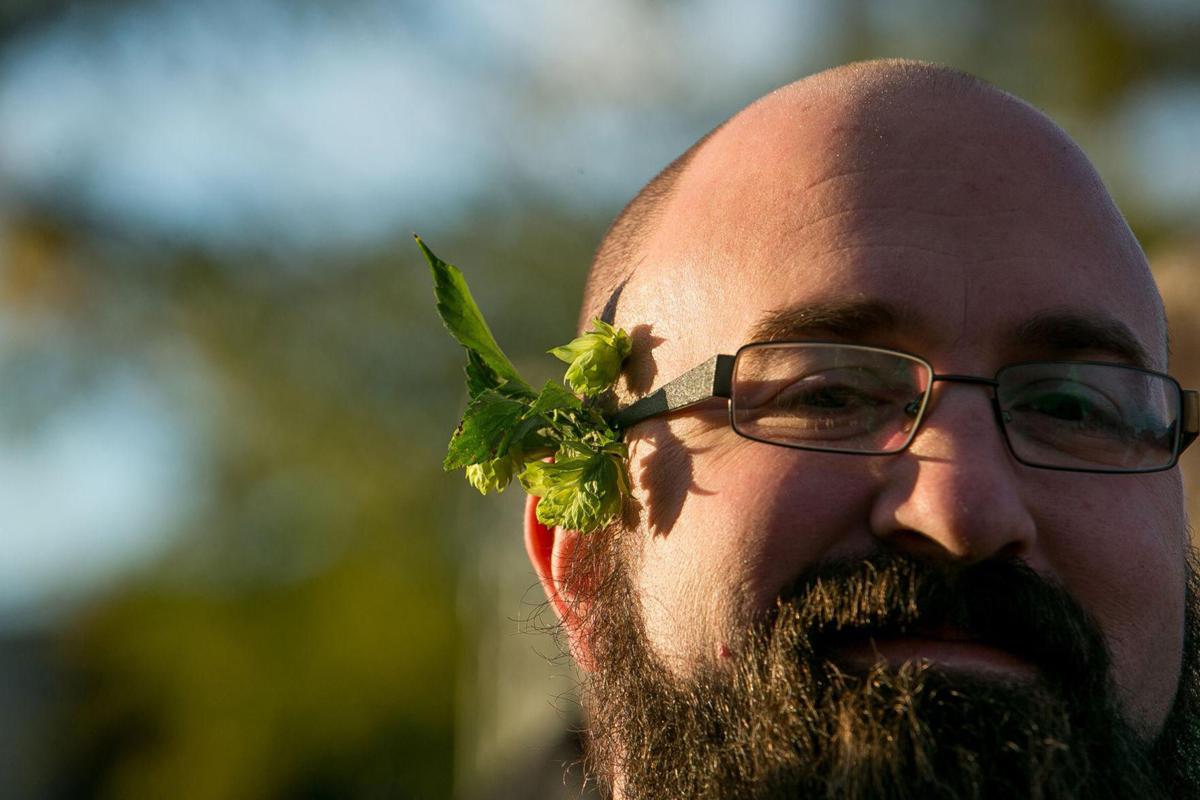 Mike Vucci of Woodinville takes in the Fresh Hop Ale Festival on Sept. 30, 2017.

Ezra Bell is the headliner at Saturday’s Fresh Hop Ale Festival. Their music is great, but good luck trying to describe it. Also playing are Bart Budwig, near right, and Bodies on the Beach, far right.

Beer is lined up at the 2017 Fresh Hop Ale Festival, then held at Millennium Plaza in downtown Yakima.

Mike Vucci of Woodinville takes in the Fresh Hop Ale Festival on Sept. 30, 2017.

You’re going to the Fresh Hop Ale Festival for the beer; that’s why everyone goes.

That beer — made with wet rather than dry hops, giving it wholly different flavors — is worth the price of admission. It’s stuff you can’t get elsewhere at any time and stuff you can’t even get here most of the year. So go for the beer. That’s fine.

But while you’re there, please take a look at the stage every now and then. It’s going to host one of the best local concerts we’ve had here in 2019, headlined by indescribable Portland band Ezra Bell and featuring Enterprise, Ore., singer-songwriter Bart Budwig and Seattle rock band Bodies on the Beach (featuring longtime Yakima music-scene leader Navid Eliot).

I’ve been aware of Ezra Bell since summer, when the band played the Yakima Folklife Festival. I looked them up a couple of times and listened to a song here or there, but I didn’t dig deep until a week or so ago. Dear lord, are they better than I realized. Every song is full of evocative imagery, even though I frequently can’t verbalize exactly what it’s evoking.

Nor can I adequately explain the noise they make. They’re a six-person band in which four of the people sing. They have a lot of saxophone in the mix, plus keyboards and tenor guitar. Their one female vocalist, the incredibly named Honora Hildreth, can make you cry or make you pump your fist. They’re like nothing else I’ve ever heard, but they’re also kind of like everything else I’ve ever heard all piled together in a way that somehow sorts itself out. Also, they sound like old-time carnival music. But not really. But really.

I told lead singer and frontman Ben Wuamett about my difficulty in describing his band. I hoped he could help. But he couldn’t.

“I really have as much trouble explaining it as you do,” he said. “I don’t know, ‘neo-folk with a horn section?’”

That description, while technically accurate, falls woefully short. I mean, when I hear “neo-folk with a horn section” I think I know what that might sound like. And it doesn’t sound like Ezra Bell. Ezra Bell sounds different and weird. The only point of reference I can even think of is Tom Waits, at least in terms of oddball instrumentation and unpredictability. But they sound NOTHING like Tom Waits.

Here is what I can tell you, definitively, about Ezra Bell: They play songs that are challenging and often dark in their content, but they play them beautifully. Wuamett uses the word “pretty,” which I generally think of as a pejorative when it comes to substantive music but which in this case fits. The music is downright pretty, even as the lyrics conjure images of pain.

A little more about those lyrics. They’re literary in a way few lyrics are. They’re poetic, even. “Poetic” not as a judgment of quality but as in they read like poetry — whole emotional landscapes distilled into hardened little phrases, loaded with so much potential for meaning that they can be interpreted endlessly. A lot of them seem like character sketches, but Wuamett says they’re mostly drawn from his life.

“They’re pretty much biographical,” he said. “A lot of it comes from my experience. And a lot of it is about people I love, or people I used to love, people who used to love me.”

And then, again, they’re put to this odd, sometimes cacophonous music that somehow ends up being pretty. Hildreth, of whom Wuamett said “She’s as good a singer as you’ll ever hear,” has a lot to do with that. So, too, Aaron Mattison’s horn playing, which frequently sounds like a lead singer itself.

“He’s created a sound we couldn’t otherwise have had,” Wuamett said.

When the whole band is up on stage together, and all of those pieces collide, becoming something greater than the sum of all of those parts, it’s a thing to behold. For Wuamett, it’s essentially the meaning of life.

“It’s the only thing that matters to me,” he said. “It’s a very strange, big world. And I don’t have any idea why any of us are here. But I feel like this is my contribution to the confusion.”

So, while you’re drowning yourself in some of the most delicious beer ever made, please, if you can, please, stop and listen for at least a little while.

• Bart Budwig: Budwig has played the Yakima Valley a whole bunch of times over the past few years. I’ve seen him at least a half-dozen times myself, and I’ll keep going to see him every chance I get. He’s goofy and amiable on stage, and then he starts singing and I’ll be damned if he can’t sing the whole range of human emotion.

• Bodies on the Beach: If you follow local music, you know Navid Eliot pretty well already. He was the main creative force behind Planes on Paper, most recently, and Not Amy before that. This band, which he formed after moving back to Seattle last year, features a lot of the same lyrical style but with louder music. It’s a rock band and a good one. If you liked Planes on Paper (and we all did) but you also like electric guitars, you’ll like Bodies on the Beach.