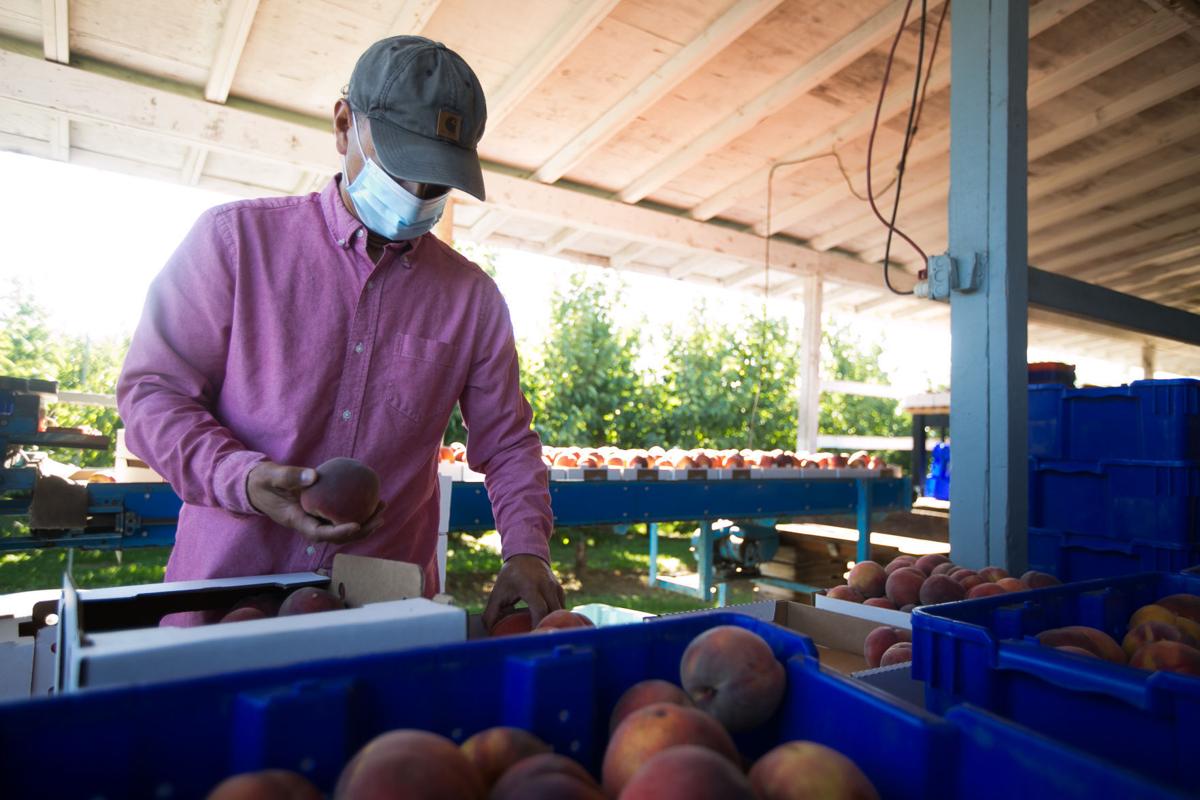 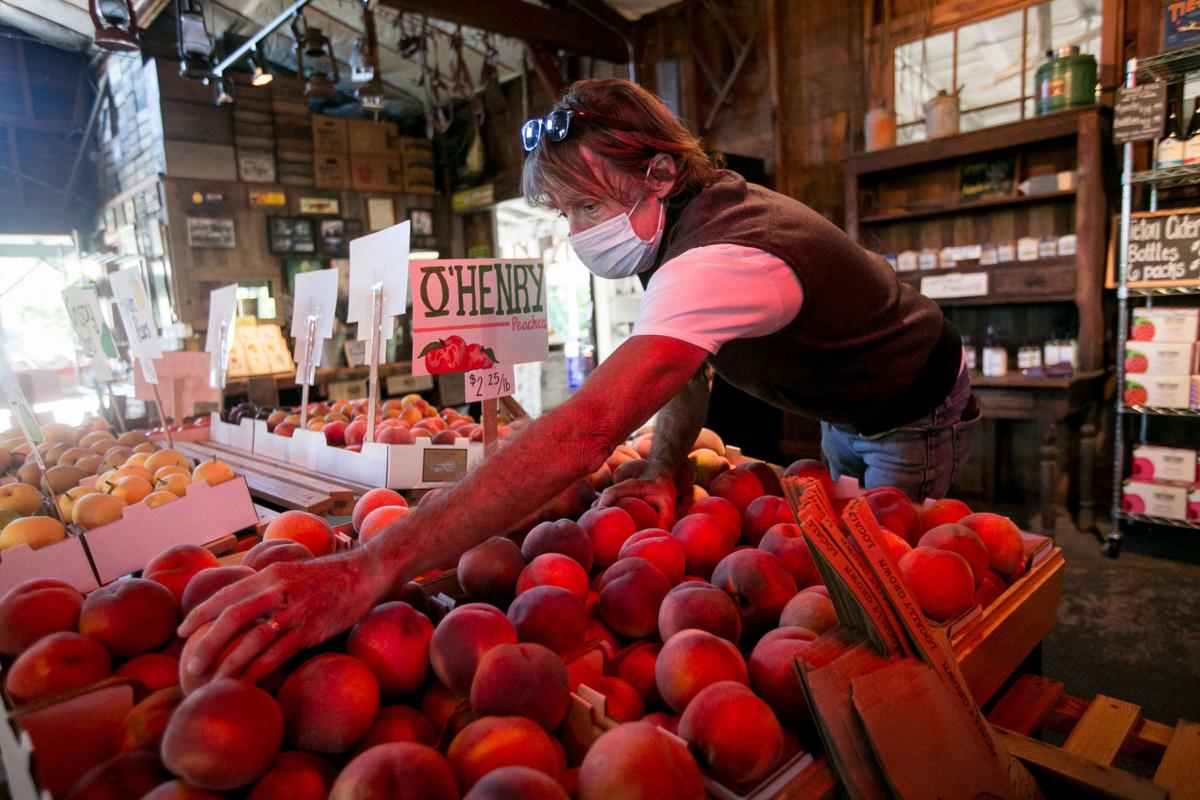 Eric Johnson, whose family has grown fruit in West Yakima since 1904, arranges O’Henry peaches on a fruit stand Wednesday, Sept. 2, 2020, at Johnson Orchards in Yakima, Wash. 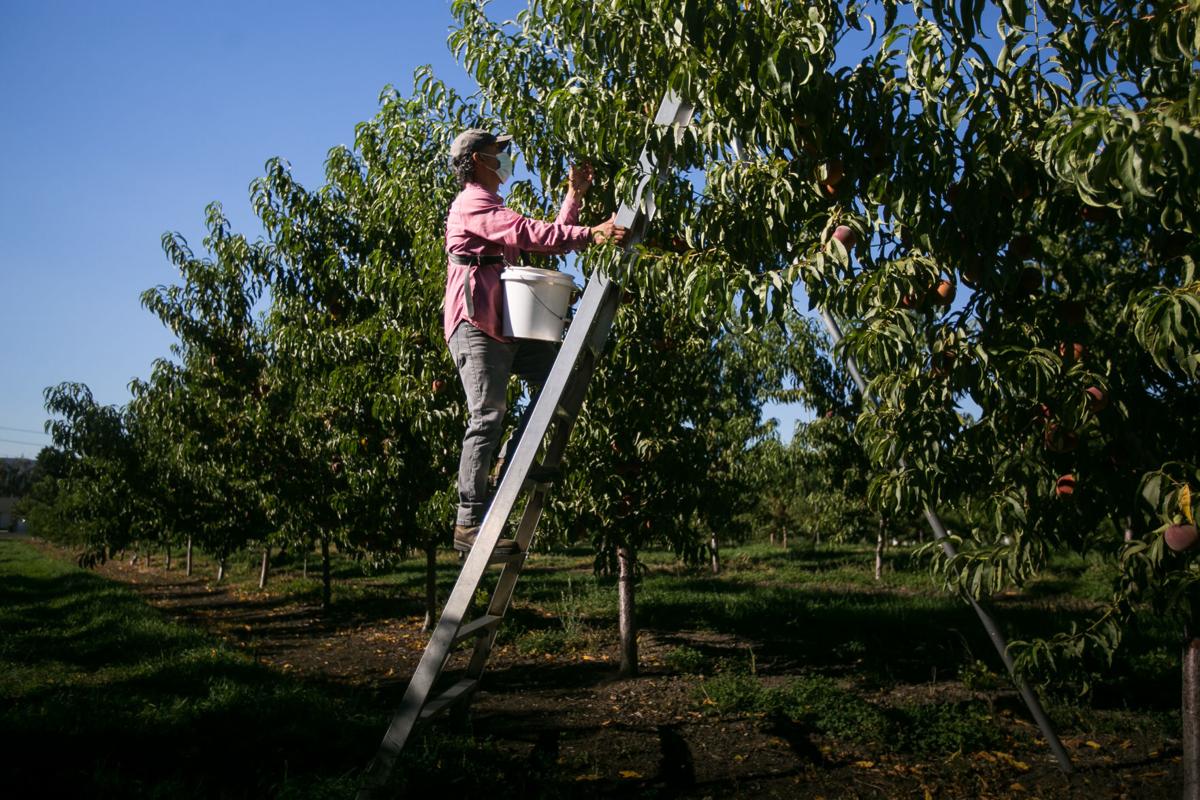 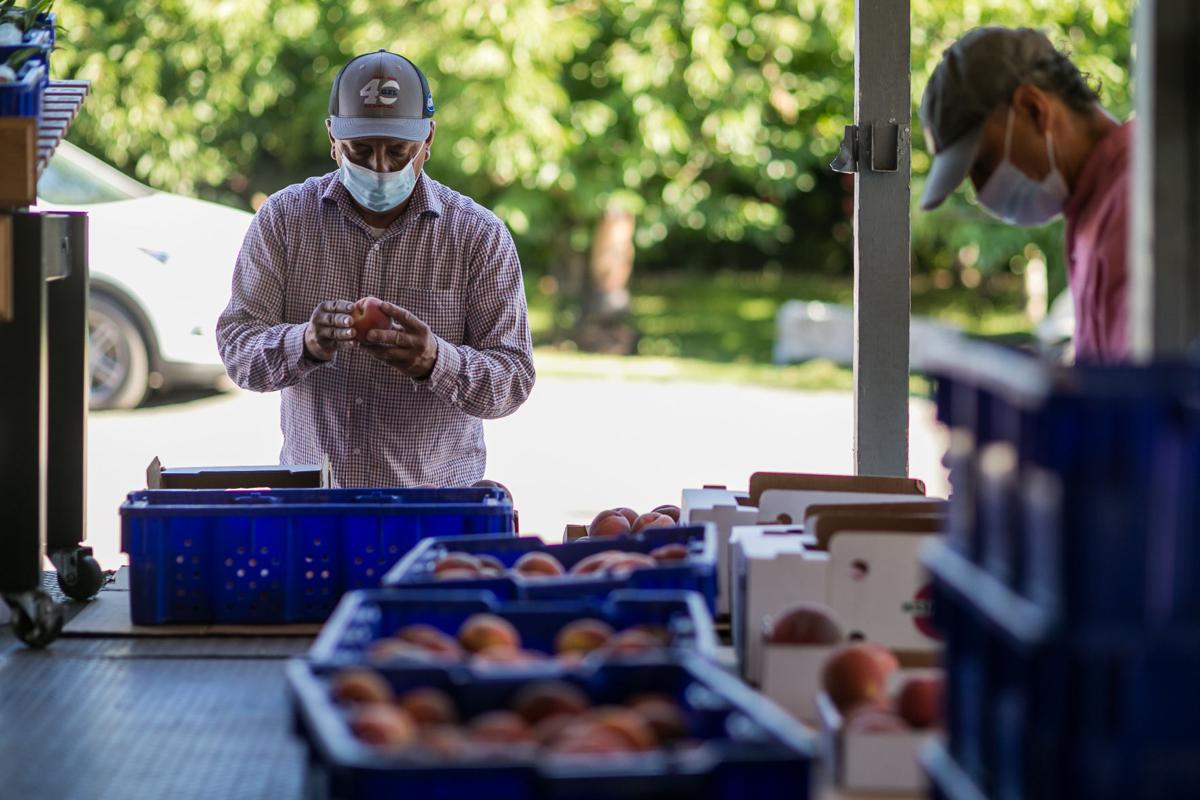 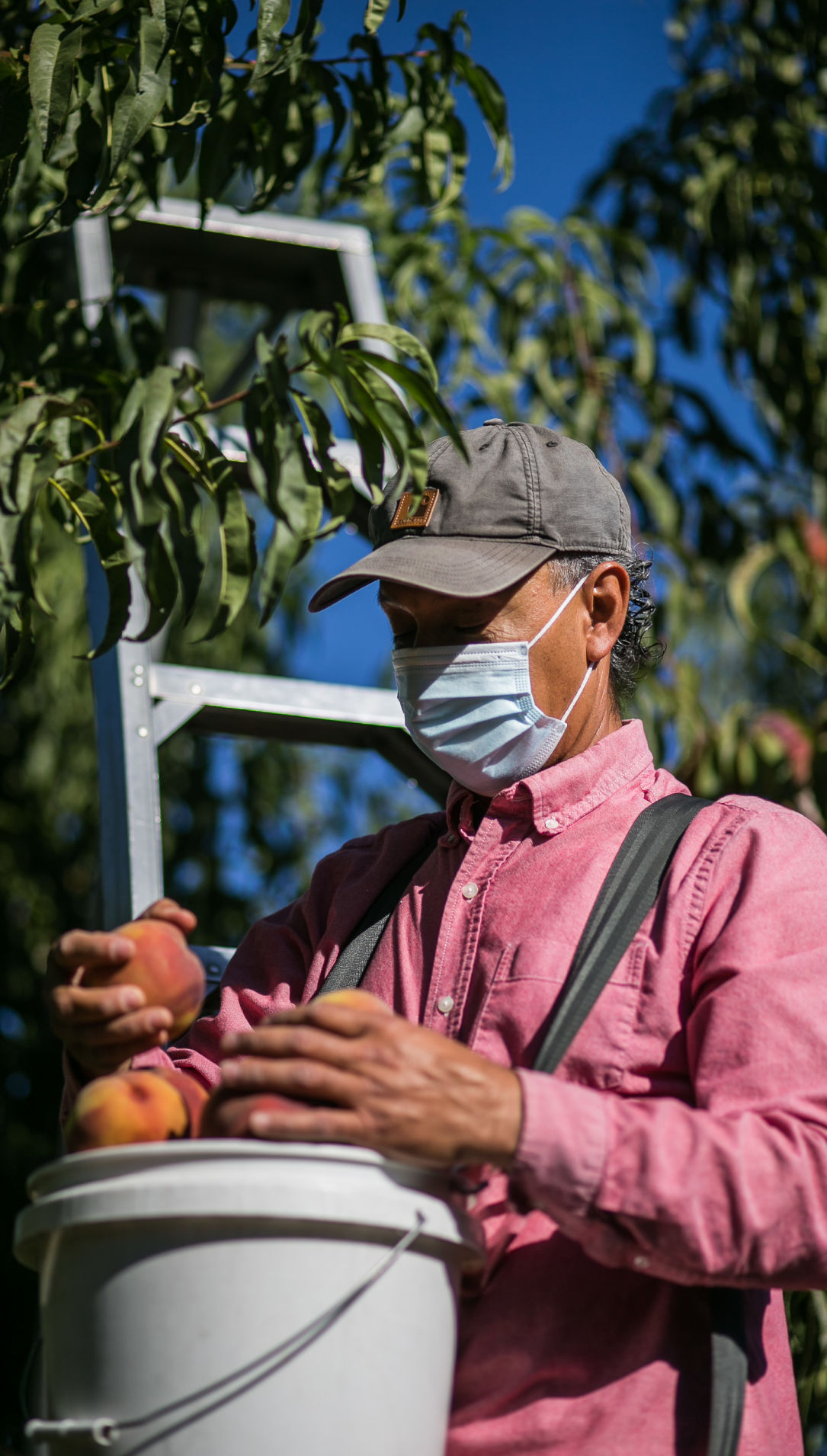 Eric Johnson, whose family has grown fruit in West Yakima since 1904, arranges O’Henry peaches on a fruit stand Wednesday, Sept. 2, 2020, at Johnson Orchards in Yakima, Wash.

Were it up to me, all Sept. 1 television broadcasts would be interrupted for an emergency alert: “Attention! Attention! The end of peach season is upon us. After the next couple of weeks, there will be no more Yakima Valley peaches until next July. Please plan accordingly. Nothing gold can stay. A moment’s beginning ends in a moment. May god have mercy on us all.”

The end of local peach season somehow catches me by surprise most years. I’ll finish a box of peaches at the end of August and, instead of running out to buy another one, I’ll put it off until it’s too late. And then what? Supermarket peaches? I’d rather have no peaches at all than go from the very best fresh Yakima Valley peaches — available from mid-July to mid-September every year, depending on the breaks — to some peach grown a million miles away and shipped here in our off-season. And so there I sit, peachless in my misery. It’s a real problem.

This End of Peach Season Malaise (or EPSM) is a relatively new phenomenon to me. If you grew up in Central Washington and never spent much time living elsewhere, you may not know this: Most places don’t have peaches like we have here. I grew up in Michigan, which is also a peach-growing state. They grow good peaches there. Proud, strong Midwestern peaches with hearty dispositions and an undying devotion to Big Ten football. I used to love those peaches. I thought they were the best that peaches could be. But I never had EPSM like that when Michigan peach season ended.

Next to Yakima Valley peaches, those Michigan peaches might as well have been filled with sawdust. The peaches here are juicier, sweeter and richer in flavor. If you get one from a local farm, and if it’s just the right amount of ripe (yielding to pressure from a finger but not yet mushy), there is no greater food.

We grow a lot of them, too. Though peaches likely will never top apples or cherries (or even pears) in terms of Washington tree fruit production, we are nevertheless one of the top peach-producing states in the nation. Washington is fifth in the U.S. this year with 12,500 tons of peaches produced, an increase of 12% over 2019, according to this month’s USDA National Agricultural Statistics Service fruit crop forecast. (We had been seventh in the nation for several years, but New Jersey and Colorado had difficult peach seasons this year, pushing Washington into fifth place.)

We’ll never catch California, which is on track to produce 490,000 tons of peaches this year — roughly three-quarters of the national total — but ours taste better. It’s not just me saying that, either. The matter was officially decided in 2007 when Oregon State University scientist Ann Colonna’s taste tests showed that 78% of 640 tasters preferred Washington peaches to California peaches.

And there are so many varieties. In Washington, we grow Diamond Princess, Donut, Elberta, Elegant Lady, Flamecrest, O’Henry, Red Haven, Regina, Rich Lady, Ryan Sun, Snow Giant, Summer Lady, Sweet Dream and Zee Lady peaches. I’m partial to the Elberta and Diamond Princess, but you really can’t go wrong with any of them if they’re nice and ripe.

Some are better for canning, some for eating fresh and some for baking. At my house, my wife uses them for cobblers and crisps. I use them for drinks, especially when I get down to the end of a box and they’re getting a little mushy. (If you like whiskey and haven’t had a bourbon smash before, stop reading this right now and go make one using the recipe that ran with this story.)

The Washington State Fruit Commission, headquartered right here in Yakima (where else?) has an outstanding collection of recipes on its website. Some are standard — peach pie, peach crisp, peach smoothies — and some are more adventurous — peach and corn salsa, peach liqueur, grilled peaches with bourbon-vanilla whipped cream. They all look outstanding. But there is not a Yakima Valley peach known to humans that I won’t just pick up and take a bite out of. And I’ve never regretted it.

Right now, local growers and sellers are finishing up Snow Giants and just moving into O’Henry peaches, which are usually the last of the year. They’ll be around for a couple more weeks, tops. So get out there and get some. And tell your friends. We don’t need any of our loved ones suffering from EPSM.

Combine all ingredients in shaker with ice. Shake 20-30 seconds. Strain over fresh ice in a lowball glass.

In another bowl, mix together rolled oats, flour, brown sugar, almonds, coconut and cinnamon until well-combined. Melt butter in the microwave in 30-second increments. Once butter is melted, pour over oat mixture and, using a wooden spoon, mix together until clumps begin to form and the butter saturates the entire mixture.

Pour oat mixture evenly over fruit. Bake 35-40 minutes or until the crisp is golden brown and the fruit along the edges of the dish bubbles. Remove from oven and allow to cool at least 30 minutes. The crisp will be quite juicy when hot but not after it cools. Serve with vanilla ice cream or whipped cream for dessert, or plain Greek yogurt for the best summer breakfast.

4-6 peaches sliced in half, pit removed

1 tablespoon turbinado sugar (any raw sugar will do)

Preheat grill to medium. Scrape any charred bits from the grill so you have a cleanish area for the peaches. Slice peaches in half and remove pits. No need to peel skin off. Set aside.

In small sauce pan or skillet, melt butter over medium heat. Allow butter to brown until it smells toasted and is a deep golden brown, about 3-4 minutes. Stir often. Remove from heat and transfer butter to a bowl. Stir in honey and cinnamon.

To grill the peaches, sprinkle them with the turbinado sugar. Place them flesh-side down on the grill for 2-3 minutes or until grill marks appear. Flip and grill another 2-3 minutes on the other side. Remove from grill and divide into shallow bowls. Drizzle with honey butter and a generous scoop of vanilla ice cream.