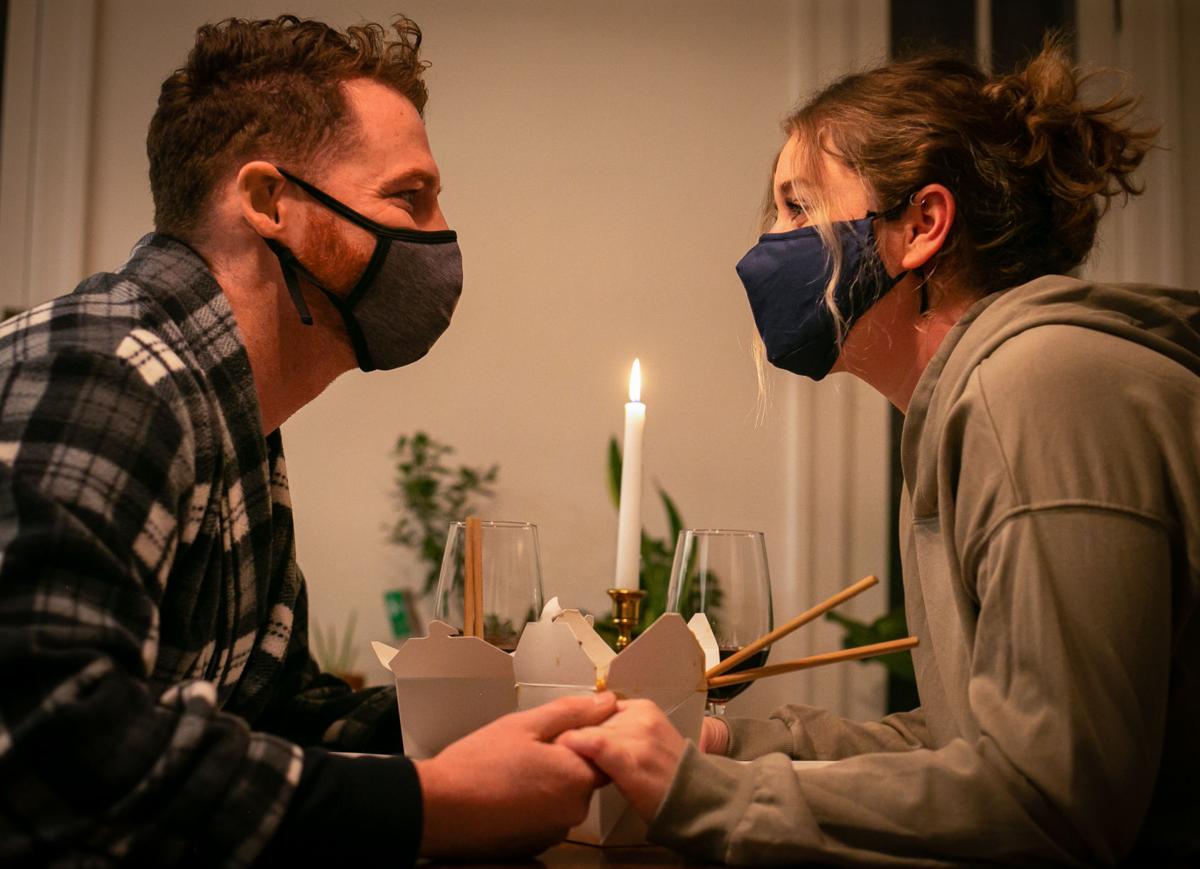 One way to celebrate Valentine’s Day amid the coronavirus pandemic is to bring out a bottle of wine and toast over a plate of your favorite take-out. In this photo illustration, Jake Parrish, left, and Taylor Boyle wear face coverings at their home in Yakima, Wash., over take-out boxes from EZ Tiger Tuesday, Feb. 9, 2021. 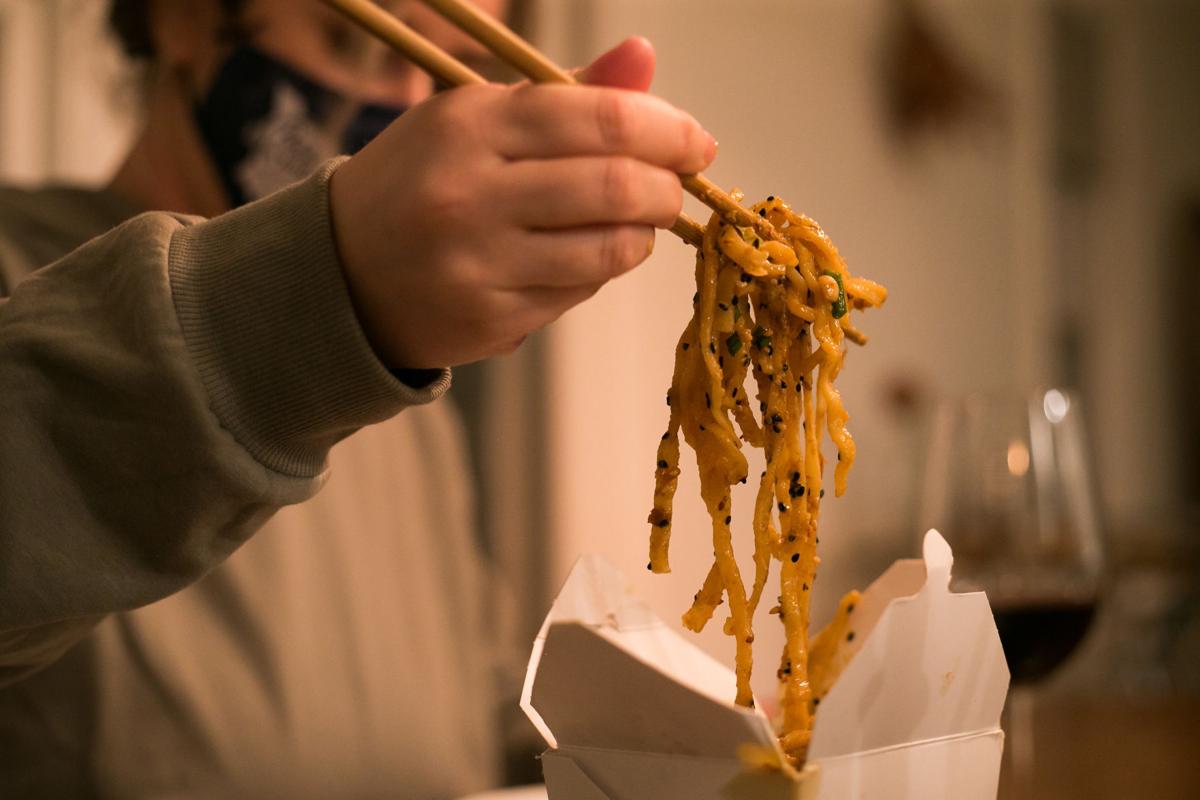 Taylor Boyle prepares her dinner plate with Spicy Peanut Noodles from EZ Tiger Tuesday, Feb. 9, 2021, during a date night with Jake Parrish at their home in Yakima, Wash. 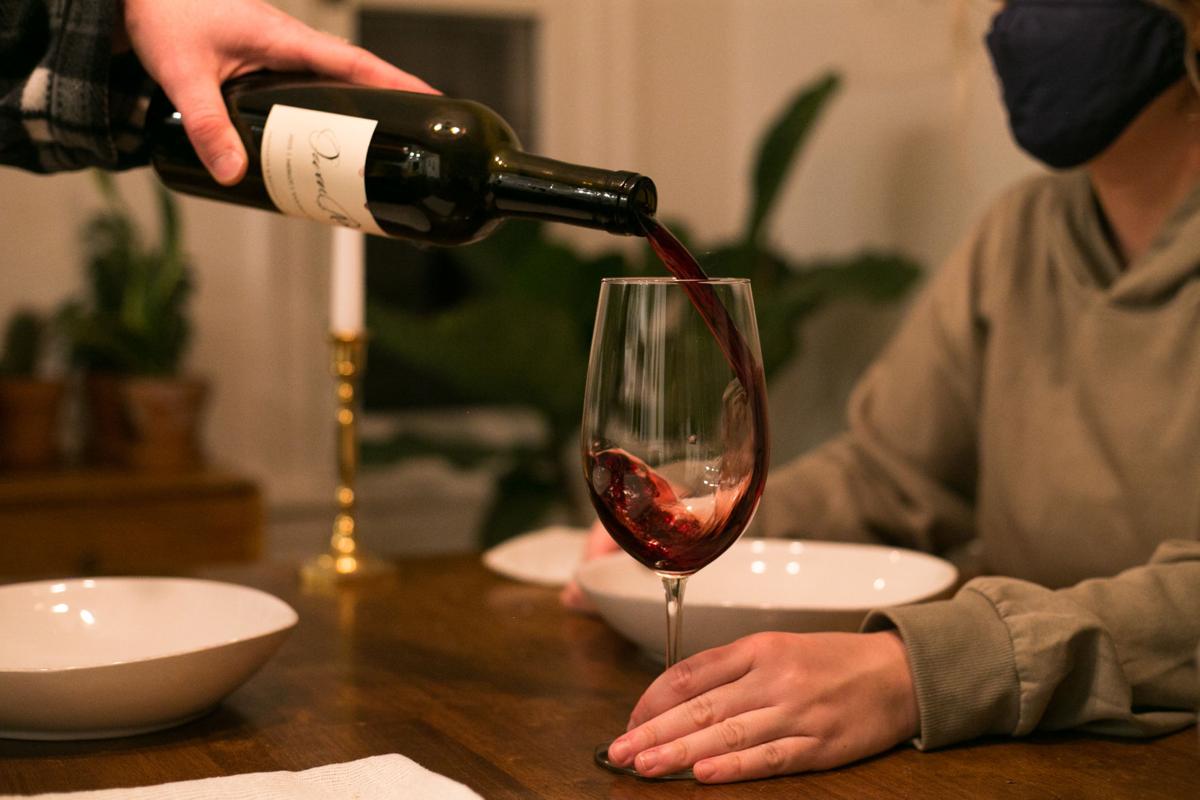 Jake Parrish pours a glass of Owen Roe’s Merlot for Taylor Boyle Tuesday, Feb. 9, 2021, during a date night at their home in Yakima, Wash.

One way to celebrate Valentine’s Day amid the coronavirus pandemic is to bring out a bottle of wine and toast over a plate of your favorite take-out. In this photo illustration, Jake Parrish, left, and Taylor Boyle wear face coverings at their home in Yakima, Wash., over take-out boxes from EZ Tiger Tuesday, Feb. 9, 2021.

Taylor Boyle prepares her dinner plate with Spicy Peanut Noodles from EZ Tiger Tuesday, Feb. 9, 2021, during a date night with Jake Parrish at their home in Yakima, Wash.

Jake Parrish pours a glass of Owen Roe’s Merlot for Taylor Boyle Tuesday, Feb. 9, 2021, during a date night at their home in Yakima, Wash.

Valentine’s Day last year was really the last holiday before everything changed.

By St. Patrick’s Day, roughly a month later, everything was shut down. So Valentine’s Day was it, that last noteworthy holiday of The Before Times. We were so young and naive then. We could do anything we wanted, but we didn’t have a clue how much that meant.

You know what I did? You know what my wife and I did with all that freedom last Valentine’s Day? Nothing. We did nothing. We put the kids to bed. Then we fell asleep. I don’t even think we made dinner. In our defense, she’d just pulled an overnight hospital shift and the kids had spent the previous week running me ragged in her absence. And obviously, critically, we didn’t know the entire world was about to enter a no-end-in-sight quarantine. If we had, we might’ve put on some nice clothes and gone out to a fancy restaurant. Or something. Anything. But we didn’t. So we just stayed in. Given carte blanche to roam the world freely and without consequence, we shrugged and went to bed.

This year, Valentine’s Day has a whole different feel. Some restaurants (including special-occasion favorites like Crafted, Provisions and E.Z Tiger) are open for dine-in meals either on Sunday (Valentine’s Day proper) or Friday and Saturday. But, given the COVID-limited capacity, most people are probably going to be celebrating at home. That’s not necessarily a bad thing, a cozy night in. But the whole last year has been filled with cozy night in after cozy night in. So you might want to do something a little bit special. Otherwise your Valentine’s Day could easily just be another night at home. Quarantine Day No. 331, or whatever.

Fortunately for you, I’m very romantic. And I have suggestions:

Write or recite something

This is such a small thing, but it can mean a lot. Imagine sitting down for a nice romantic dinner. The wine, the candlelight, the soft music, the whole thing. But before you start to eat, you tell your wife/husband/girlfriend/boyfriend/partner you’d like to say something. Then you read or recite something heartfelt about them. It can be a poem or just some honest thoughts. It can be your own words or something someone else wrote that resonated with you. (I’m partial to the Leonard Cohen poem ”Beneath My Hands.”)

It doesn’t have to be flowery, just genuine. Last year for our anniversary, I re-memorized our wedding vows and busted those out at an opportune time. It wasn’t a grand romantic gesture or anything, but it was a surprise and it was appreciated. That’s what you’re going for here, a thoughtful little accent to your evening.

As mentioned above, there are some good restaurants taking reservations for dine-in Valentine’s Day weekend dinners. There are also plenty of options for special meals at home. By this point in the quarantine, fine-dining places have elevated their takeout procedures to a whole new level, so that’s definitely a viable plan. But it doesn’t even have to be anything fancy, so long as it’s special to you. You can get tacos from that place where you stopped the day after your wedding. You can get sushi from the same place you went on your first date. That kind of thing.

You can also cook. Again, it doesn’t have to be fancy. Trying and failing to perfectly prepare super-impressive cuisine at home is a common Valentine’s Day pitfall. So pick something you know you can do and then make the very best version of that. Even if that’s simply cooking a nice cut of meat and chopping veggies for a salad, it can be an elegant and memorable meal.

You can have your normal $5 wine if it’s what you and your partner really like. But if you have the means, there’s no better time to splurge than Valentine’s Day. The Yakima Valley produces several top-tier wines that are out of my normal price range but are worth every dime (the 2015 Côte Bonneville eponymous blend at $120, any of the Owen Roe single-vineyard cabernet sauvignons at $72, Sheridan Vineyards 2017 Block 1 cabernet sauvignon at $125) and dozens more in the $30-$60 range. You can also always buy Champagne, the real stuff, the stuff from France. It starts around $50 and goes way higher from there, but it’s inherently special.

In terms of cocktails, I tend to think of darker, richer spirits as more romantic. So if you’ve got a nice Cognac or a top-shelf bourbon, you might think about mixing up some Sidecars or Manhattans. You can also go with the Saint Valentine, a drink invented by David Wondrich specifically for the holiday: 1 1/2 ounces white rum, 1/2 ounce ruby port, 1/2 ounce orange liqueur such as Grand Marnier, 1/2 ounce lime juice; shake with ice and strain into cocktail glass).

When I was a boy back in the late 20th century, we had these things called mixtapes. We’d record songs from records and CDs onto cassettes and them give them to people we had crushes on. Then we’d watch a network sitcom, send a letter to a friend and read a newspaper. Then we’d try to call the person we gave the tape to, but the line would be busy because they didn’t have call-waiting. So we’d be left wondering whether they liked it until the next day at school.

Nowadays you can just make a list on Spotify or whatever system you use to make your playlists. You can perfectly tailor it to include stuff your partner likes, songs that hold special significance in your relationship or just outstanding love songs. If you’re looking for ideas, or if you’d like to just wholesale steal my list, it’s available on Spotify. Just search for ”SCENE Valentine’s Day songs for super-romantic lovers and those they love.” It’s got Nick Cave, Yeah Yeah Yeahs, Lizzo, Rex Orange County, Aretha Franklin and so much more. I’m listening to it right now, and I swear it’s made me love all of you so much.