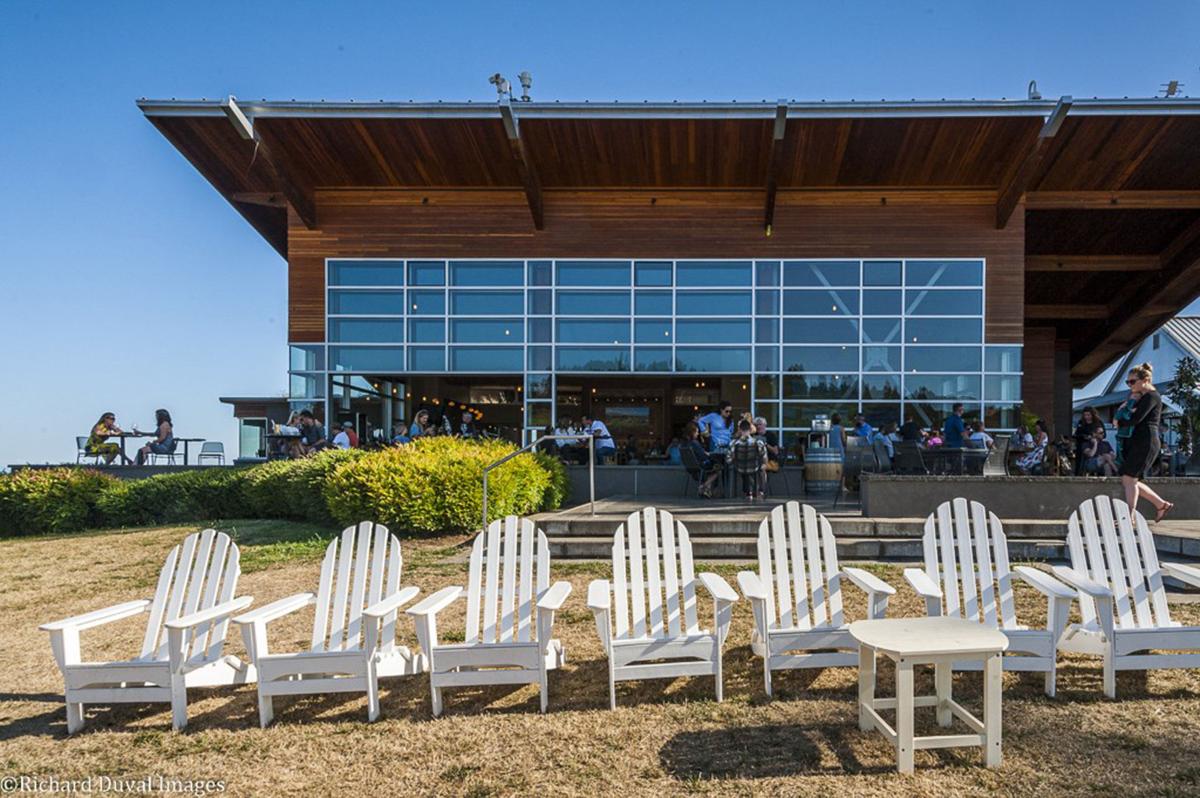 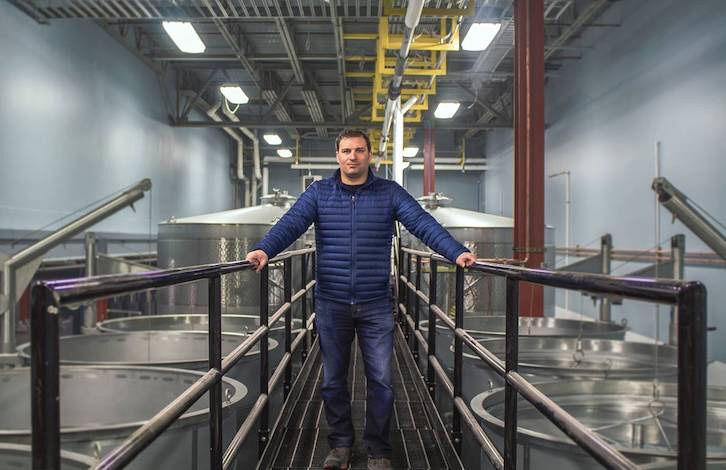 Jason Gorski is the director of winemaking and viticulture for DeLille Cellars. 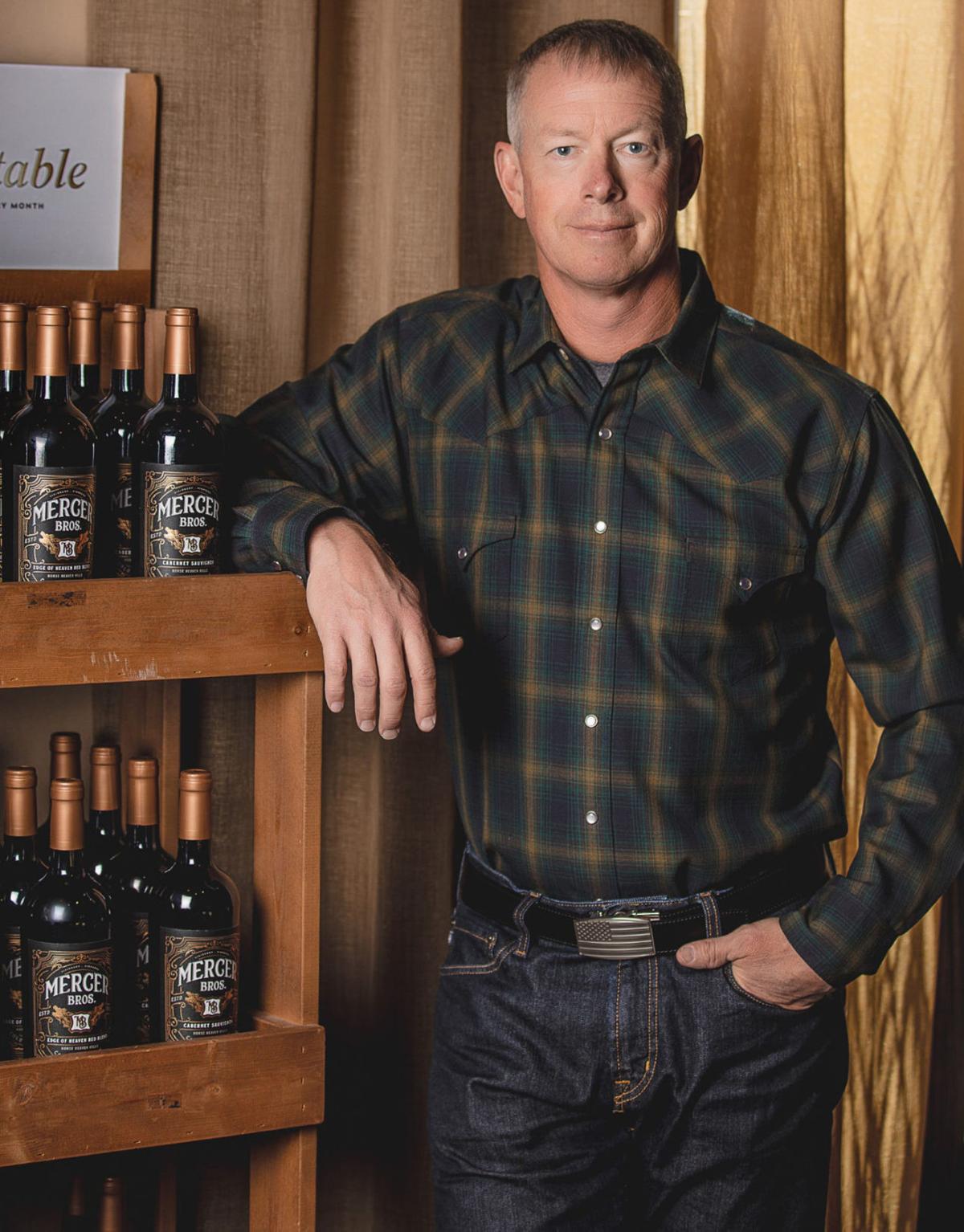 Rob Mercer, the Honorary Grower for the 2020 Auction of Washington Wines, capped the year with news that the Mercer Bros. 2017 Cabernet Sauvignon made Wine Spectator magazine’s Top 100 Wines for 2020. 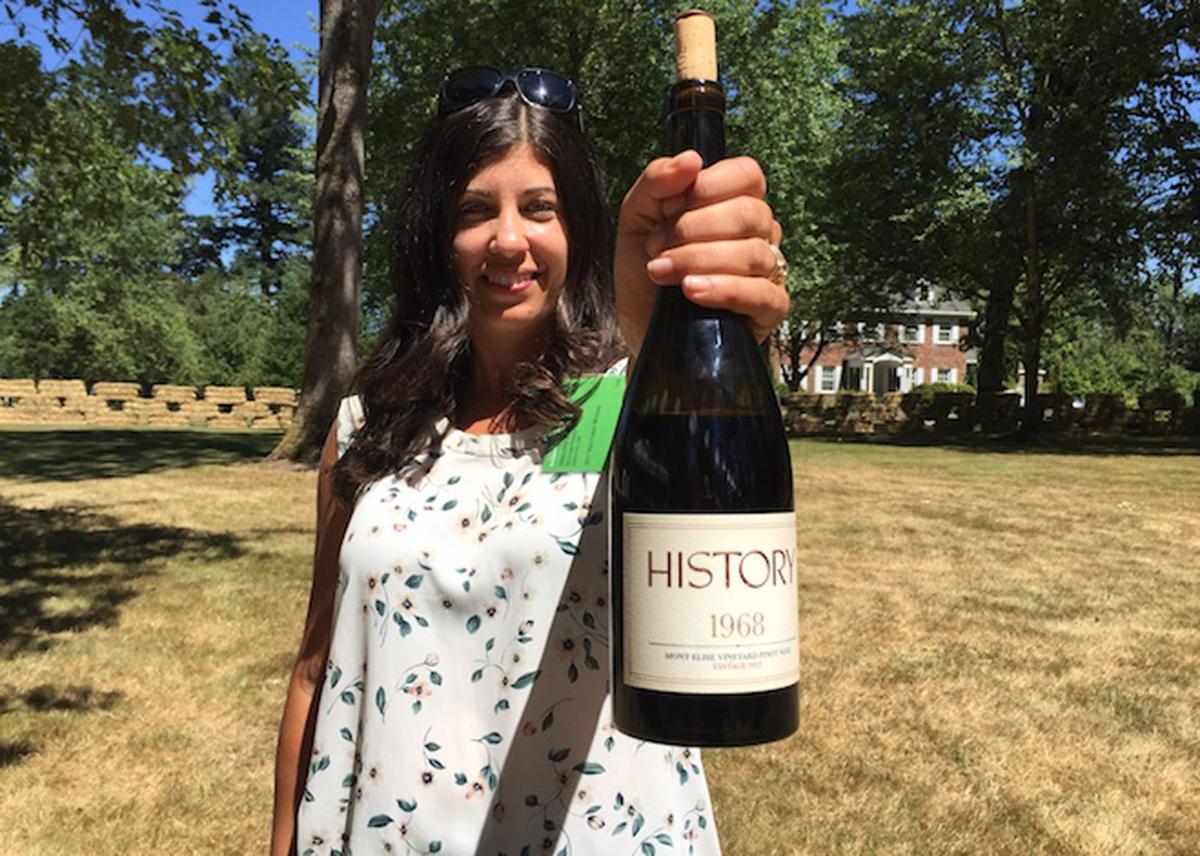 Melissa Burr, vice president of winemaking for Stoller Family Estate , has been at the Dundee, Ore., winery since 2003. 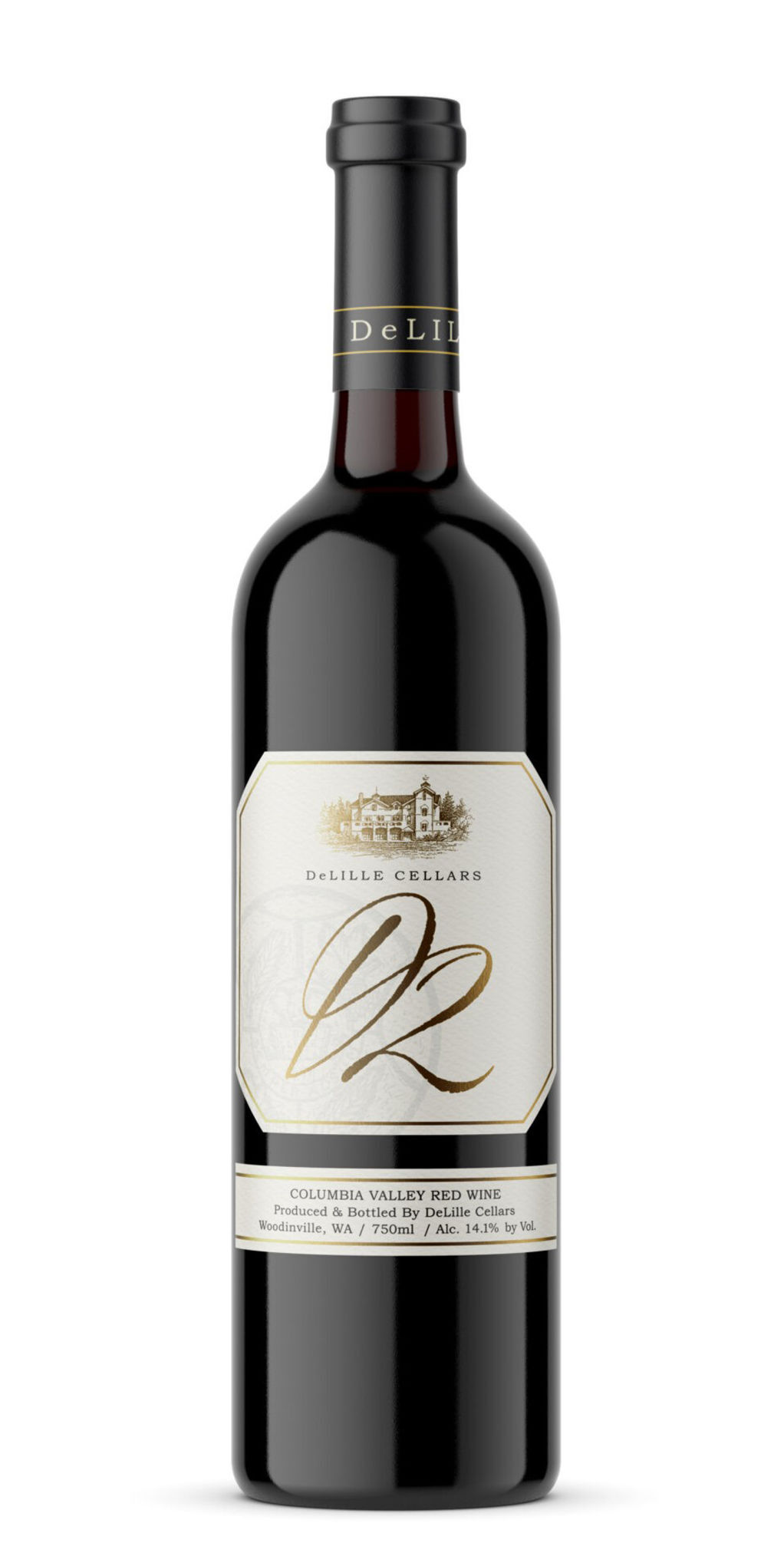 The L’Ecole No. 41 Winery 2018 Frenchtown has been recognized by Wine Spectator magazine as one of the world’s top values for 2020.

The Seven Hills Winery 2019 Dry Rosé has been recognized by Wine Spectator magazine as one of the world’s top values for 2020.

Jason Gorski is the director of winemaking and viticulture for DeLille Cellars.

Rob Mercer, the Honorary Grower for the 2020 Auction of Washington Wines, capped the year with news that the Mercer Bros. 2017 Cabernet Sauvignon made Wine Spectator magazine’s Top 100 Wines for 2020.

Melissa Burr, vice president of winemaking for Stoller Family Estate , has been at the Dundee, Ore., winery since 2003.

The L’Ecole No. 41 Winery 2018 Frenchtown has been recognized by Wine Spectator magazine as one of the world’s top values for 2020.

The Seven Hills Winery 2019 Dry Rosé has been recognized by Wine Spectator magazine as one of the world’s top values for 2020.

The Oregon wine industry extended its remarkable — but almost predictable — recent run of acclaim when seven pinot noirs from the north Willamette Valley landed on Wine Spectator’s Top 100 Wines of 2020.

Washington state saw three wines make the top 100, meaning the Northwest is responsible for 10 percent of the list. A year ago, the Northwest placed seven wines on the list.

The Willamette Valley, and wines of Oregon as a category, have shined at retail checkout and Nielsen research in recent years. While much of the U.S. wine industry was flat in terms of sales in 2019, Oregon wineries saw sales increase by nearly 13 percent.

There weren’t any major revelations in terms of Oregon’s representation on the Spectator ranking as famed producers such as Ken Wright Cellars and Stoller Family Estate made the list.

The trio of red wines from Washington that cracked the top 100 was led by DeLille Cellars at No. 63 with its 2017 D2 Red Wine. By showing up at No. 73, the Mercer family can promote its Mercer Bros. 2017 Cabernet Sauvignon as the highest-rated cab produced in Washington. That’s poignant acclaim for co-owner Rob Mercer, selected as the Honorary Grower for this year’s Auction of Washington Wines.

“It’s really rewarding to see the Mercer Bros. cabernet sauvignon recognized at this level,” said Rob’s wife, Brenda Mercer, who co-founded Mercer Estates Winery and spearheads marketing. “I think the short-term impact that we see is the huge pat-on-the-back it is to the winemaking and grape-growing teams. Long-term, we hope that being on the list helps to bring attention to the quality of wines coming out of Washington, and particularly the Horse Heaven Hills.”

And even though the Northwest placed just one wine in the Top 10 — a 2018 pinot noir from storied producer Beaux Frères, the Oregon winery co-founded by famed critic Robert Parker — it’s worth noting that Spectator’s No. 1 overall is a tempranillo from Spain. That’s the bold, early-ripening red grape that a growing number of producers in Oregon, Washington, Idaho and British Columbia are earning acclaim with, thanks in no small part to the pioneering work by Earl Jones, who celebrated the 25th anniversary of Abacela in Southern Oregon this year.

Fans of Walla Walla wines likely came away disappointed this year by Wine Spectator with only Sleight of Hand Cellars cracking the Top 100.

So how does a wine make its way onto the Spectator’s Top 100? It starts with a 90-point rating from the magazine’s panel of editors, who evaluate more than 15,000 wines during blind tastings. Selections are based on quality (at 90 points), value, availability (the number of cases either made or imported into the U.S.) and the “X-factor” — which Spectator defines as “a compelling story behind the wine.”

Spectator notes that its Top 100 should be viewed not as a “best of” listing but rather a sorting of its “most exciting.”

While the magazine says it does not want the annual feature to serve as a wish list for consumers and collectors, it will be treated as such by many.

“Late in October and early November, they did ask some questions and for some photos, but we really didn’t know what for,” Brenda Mercer said. “Needless to say we were happily surprised!”

And credit Spectator for compiling a list of top-flight wines that many consumers can track down and afford to purchase. In most cases, there was some scale to the production and likely some regional, if not national, distribution behind each wine.

That’s critical. Perhaps the biggest source of frustration that follows a wine writer comes from consumers who complain about an inability to find a highly rated bottle that’s expensive, part of a small lot or otherwise difficult to acquire — i.e., wines from British Columbia. Anyone who takes the time to look over one of these lists will find a handful of wines that seem intriguing enough to prompt some sort of action, a trip to their favorite retailer, an inquiry at a restaurant or a visit to the winery’s website.

9. Beaux Frères Winery 2018 The Beaux Frères Vineyard Pinot Noir, Ribbon Ridge, $95: In the eyes of Wine Spectator, the Etzel family has few peers when it comes to this Burgundian grape. This is the eighth time one of their wines has earned a spot on the Top 100. A year ago, their 2017 Upper Terrace Pinot Noir was No. 35.

29. The Four Graces 2017 Reserve Pinot Noir, Dundee Hills, $40: This Dundee, Ore., winery is owned by businessman Bill Foley, who earned a law degree from the University of Washington in 1974. He purchased Walla Walla’s Three Rivers Winery in 2008.

33. Ken Wright Cellars 2017 Pinot Noir, Willamette Valley, $22. Next year marks the 35th anniversary of Wright’s arrival in Oregon. Spectator has dubbed him “the Master of Pinot Noir in Oregon.”

79. Stoller Family Estate 2018 Pinot Noir, Willamette Valley, $20: One of the nation’s most recommended tasting rooms also features one of the world’s top examples of pinot noir.

88. Sleight of Hand Cellars 2016 The Archimage Reserve, Columbia Valley, $52: Trey Busch’s take on a Right Bank Bordeaux ends up as the Walla Walla Valley’s only representative on this Top 100.

To no one’s surprise, California appears early and often on this list, accounting for three wines in the top 10 and a total of 17 among the 100.

This time, the Northwest didn’t fare as well as last year when it came to Spectator’s 100 Top Values of 2020, although three of the Top 100 wines priced at $22 or less also rank as a “Top Value.” A year ago, it showed up nine times in this category.

Also, there were zero Northwest entries in the Light Whites or Rich Whites categories, which raises an eyebrow or two among fans of riesling or pinot gris.

However, in the Big Red category, there’s the Pendulum 2018 Cabernet Sauvignon ($15), a supermarket brand by Precept Wine in Seattle that’s regularly on the radar of Wine Spectator. It’s interesting to note that the Mercer Family Vineyards 2016 Cabernet Sauvignon landed in this category last year. In essence, it is the older brother of No. 72 since that MFV label has been transitioned into Mercer Bros., starting with the 2017 vintage.

Two other prominent family-owned Washington wineries earned acclaim in the “Elegant Reds” class with the Maryhill Winery 2016 Winemaker’s Red — a $16 blend led by cab — and L’Ecole No. 41 Winery 2018 Frenchtown ($22), a merlot blend crafted in the Walla Walla Valley.

Seven Hills Winery is the only other Walla Walla producer to make either top 100 list in 2020, and Casey McClellan’s 2019 Dry Rosé ($18) featuring cabernet franc is in the discussion as one of the Northwest’s best examples of rosé vintage after vintage.

Another pinot noir from Oregon showed up here with the ROCO Winery 2018 Gravel Road ($25). Precept also earned a spot in the Sparkling values group with its Gruet Winery nonvintage Blanc de Blancs ($19). While the New Mexico bubble house continues to be overseen by its French founders and routinely lists “American” on the bottle as the appellation, Precept, which purchased the brand in 2014, often uses Northwest grapes at Gruet.