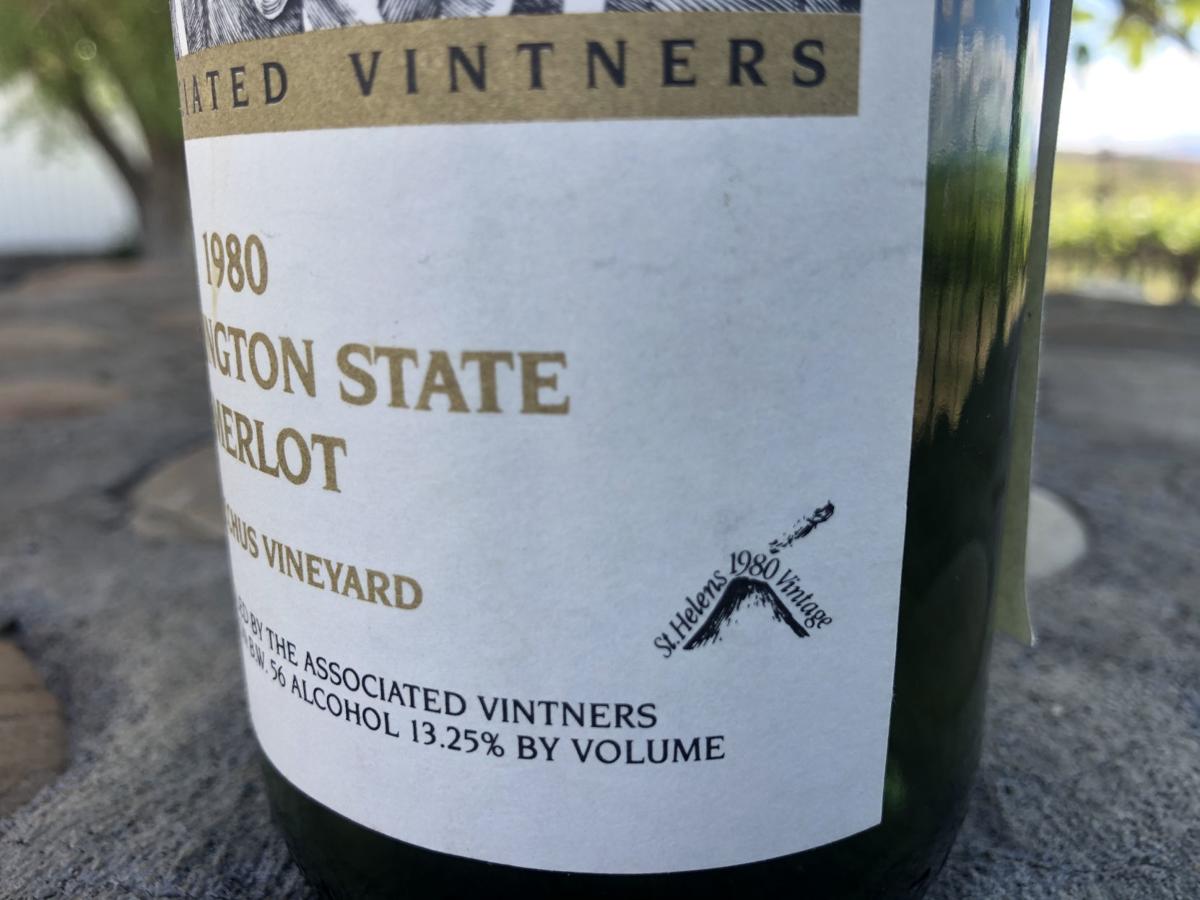 Associated Vintners, historic predecessor to Columbia Winery in Woodinville, created a logo for special bottlings that denoted the “St. Helens 1980 Vintage” and featured an ash plume. 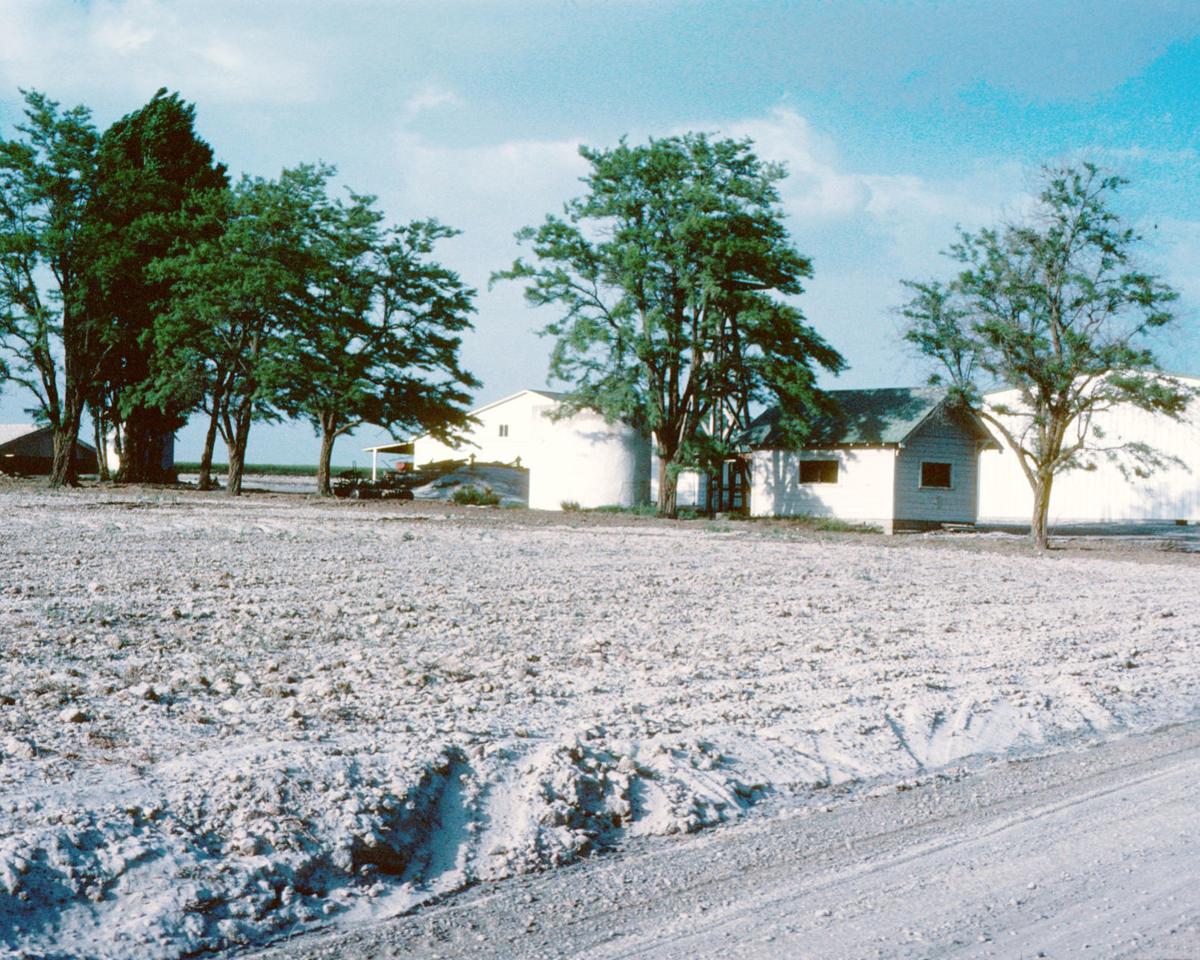 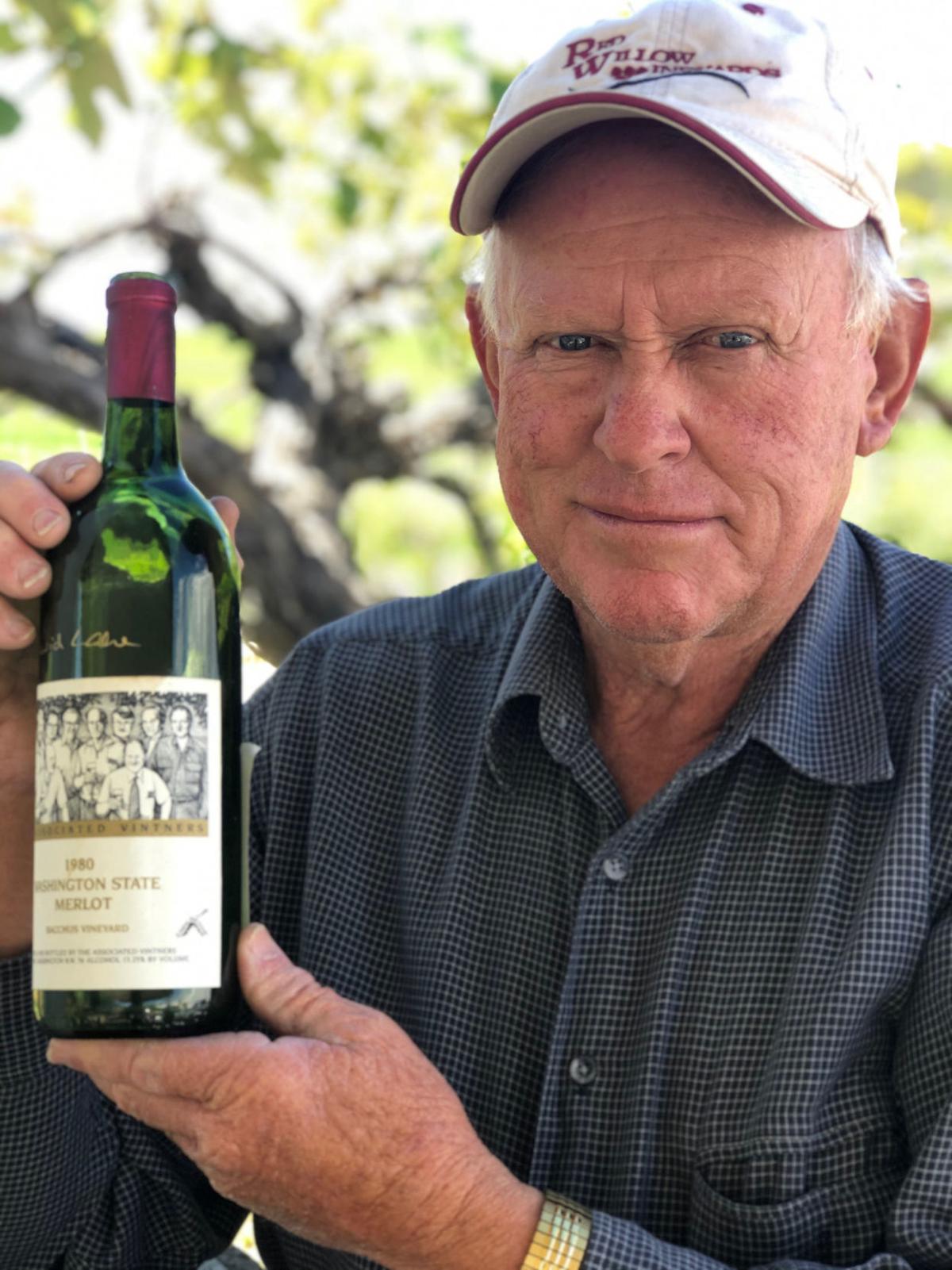 Mike Sauer established Red Willow Vineyard in the Cascade foothills at the western end of the Yakima Valley in 1971. Associated Vintners in Woodinville used fruit from the 1980 vintage to produce its first vineyard-designated wines. The label included a “St. Helens 1980 Vintage” logo, which featured a drawing of the volcanic peak with a plume of ash. 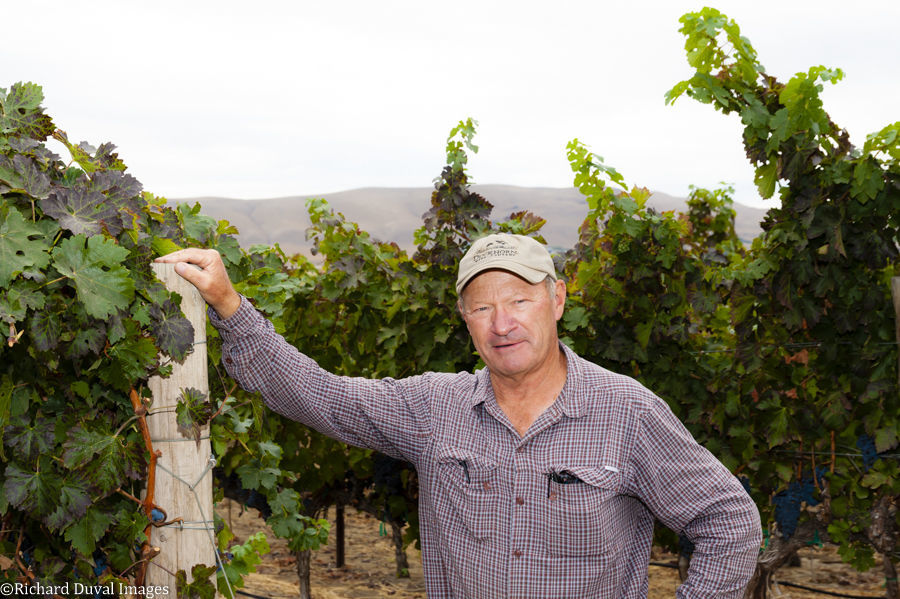 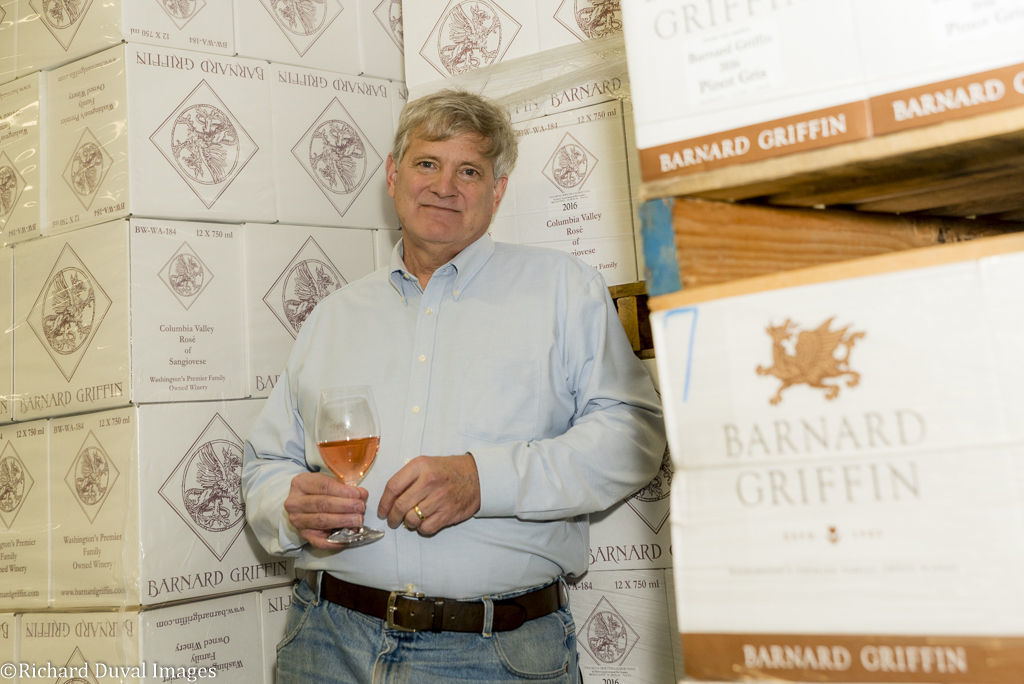 Associated Vintners, historic predecessor to Columbia Winery in Woodinville, created a logo for special bottlings that denoted the “St. Helens 1980 Vintage” and featured an ash plume.

Anyone working in the Pacific Northwest wine industry at the time will remember where they were and what they were doing when ash from Mount St. Helens began to fall 40 years ago on May 18.

It marked a week or so of sheltering in place, a term that we’re painfully familiar with today as a result of the COVID-19 pandemic. However, there was a Washington winery that would lightheartedly use labels to refer to that growing season as “St. Helens 1980 Vintage.”

The U.S. Geological Survey wrote, “Downwind of the volcano, in areas of thick ash accumulation, many agricultural crops, such as wheat, apples, potatoes and alfalfa, were destroyed. Many crops survived, however, in areas blanketed by only a thin covering of ash. In fact, the apple and wheat production in 1980 was higher than normal due to greater-than-average summer precipitation.

Just 73 minutes after the eruption, Yakima began to receive as much as 5 inches of ash. Three men who would become leaders of the modern-day Washington wine industry — growers Mike Sauer and Dick Boushey and winemaker Rob Griffin — recently shared some recollections of that day and the “St. Helens 1980 Vintage.”

It’s no surprise that a man who built a stone chapel on a hilltop in his vineyard — a structure that’s now an icon of the Washington wine industry — was driving back from church on the morning of Sunday, May 18.

“We are so close to the Cascades that we got some ash from almost all of the eruptions,” Sauer said. “It looked like the surface of the moon. Everything was just covered in this gray ash. I’d say about 3/4 of an inch thick. The plume went straight up and over us.”

Two years before Mount St. Helens first erupted, Sauer signed a contract with Associated Vintners, which would become Columbia Winery. In 1979, Lloyd Woodburne, a University of Washington professor and one of the founding winemakers, recruited David Lake, a Master of Wine, to make the AV wines.

“I remember that 1980 was the first vintage that they had vineyard-designated wines,” Sauer said. “Associated Vintners put a miniature volcano on the label.”

Those bottlings read “St. Helens 1980 Vintage” and featured an ash plume. Primary components of the ash were silicon dioxide and aluminum oxide, but it also included sulfur.

“I remember that for a number of years after, we never did any spraying for mildew because there was so much sulfur in the ash,” Sauer said. “The whole thing was fairly rich in nutrients, but in general our farm was kind of a disaster. There was the alfalfa, and the ash clogged the pores of the leaf cutter bees we used to pollinate. A lot of them died. And the ash was so abrasive on the equipment.”

“I don’t remember any big negatives about the 1980 vintage, but the 1981 wines would have seen the most influence of the nutrients, and that was just a magnificent vintage,” Sauer said.

A banker-turned-farmer who grew up near Mount Rainier in the Tacoma bedroom community of Sumner, Boushey moved across the Cascades to the Yakima Valley to help run the orchard his father purchased in the hills above Grandview.

Boushey Vineyard now serves as the centerpiece of the 300-acre farm and ranks among the most prized in the Northwest.

“Ultimately what saved it for us was that things cleared up and there was this rain that came,” Boushey said. “And we used overhead sprinklers — wine grape growers had that back then — and you could wash the ash off the leaves.”

At nascent Boushey Vineyard, the St. Helens vintage of 1980 came through about average for that era.

“I had planted 10 varieties by then, and I made wine out of all of them,” Boushey said. “I might not have made 20 Brix, but that happened a few times back in those days.”

In some ways, his life experiences today remind him of dealing with the aftermath of May 18, 1980.

“It was almost the same feeling as with this virus, the same sort of thoughts sinking in about all of these horrible things that could happen,” Boushey said. “It was kind of humbling because Mother Nature always rules.

“I remember stocking up on masks and all these filters, but I don’t remember there being a shortage like there is with what we’re going through right now” Boushey added. “We were a novelty, and we were in the news. It’s part of our area’s history, and we experienced it. I see the layers of ash when I visit with geologists.”

A proud graduate of the winemaking program at University of California-Davis, Griffin was entering his fourth vintage as a Washington winemaker and working at Preston Wine Cellars north of the Tri-Cities near Pasco.

“In the Tri-Cities, we were right on the thin edge of it,” Griffin recalls. “The ashfall was faint, just enough to write your name on the windshield. It was very heavy in Yakima and in Ritzville and Spokane.”

Bill Preston established his vineyard in 1972 and built the winery in 1976. By the time of the eruption, Preston’s plantings stretched 171 acres. Because the Preston wine program was built almost entirely on estate fruit, Griffin didn’t work with grapes that experienced much of the ash.

“It was believed that the volcanic ash was keeping the insect population down that year,” Griffin said.