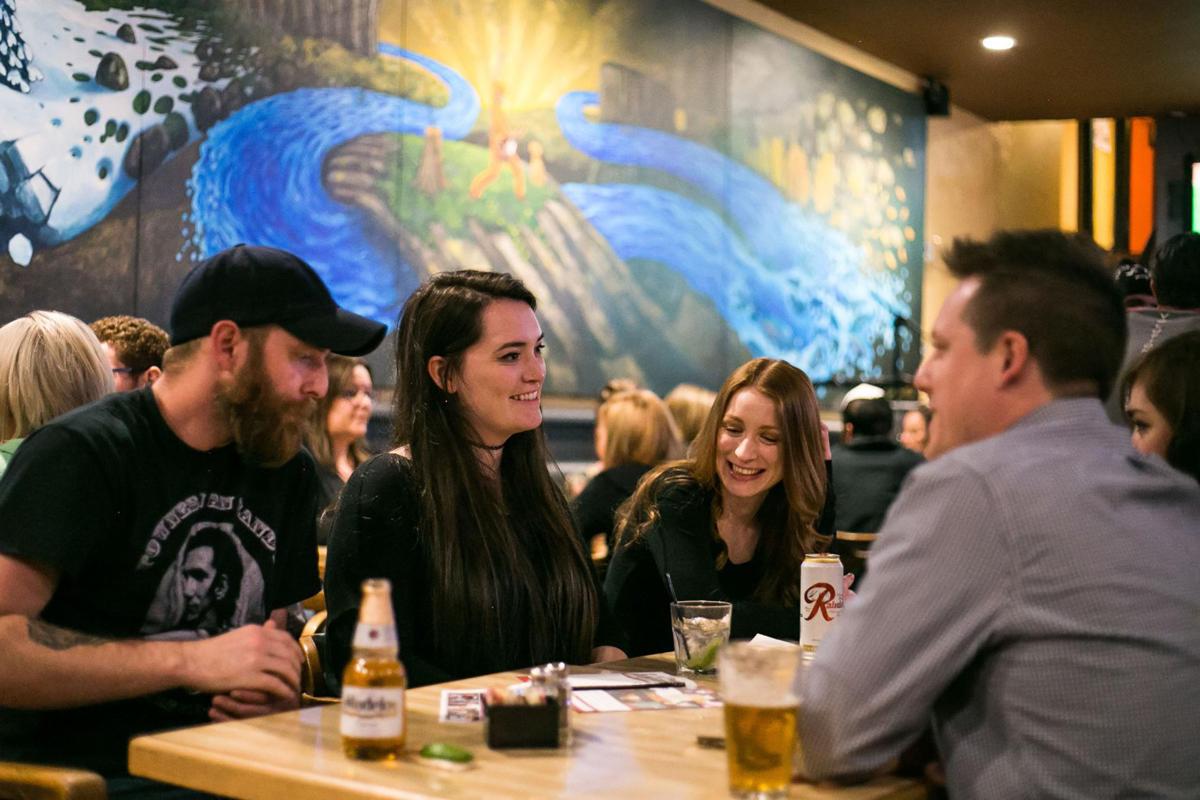 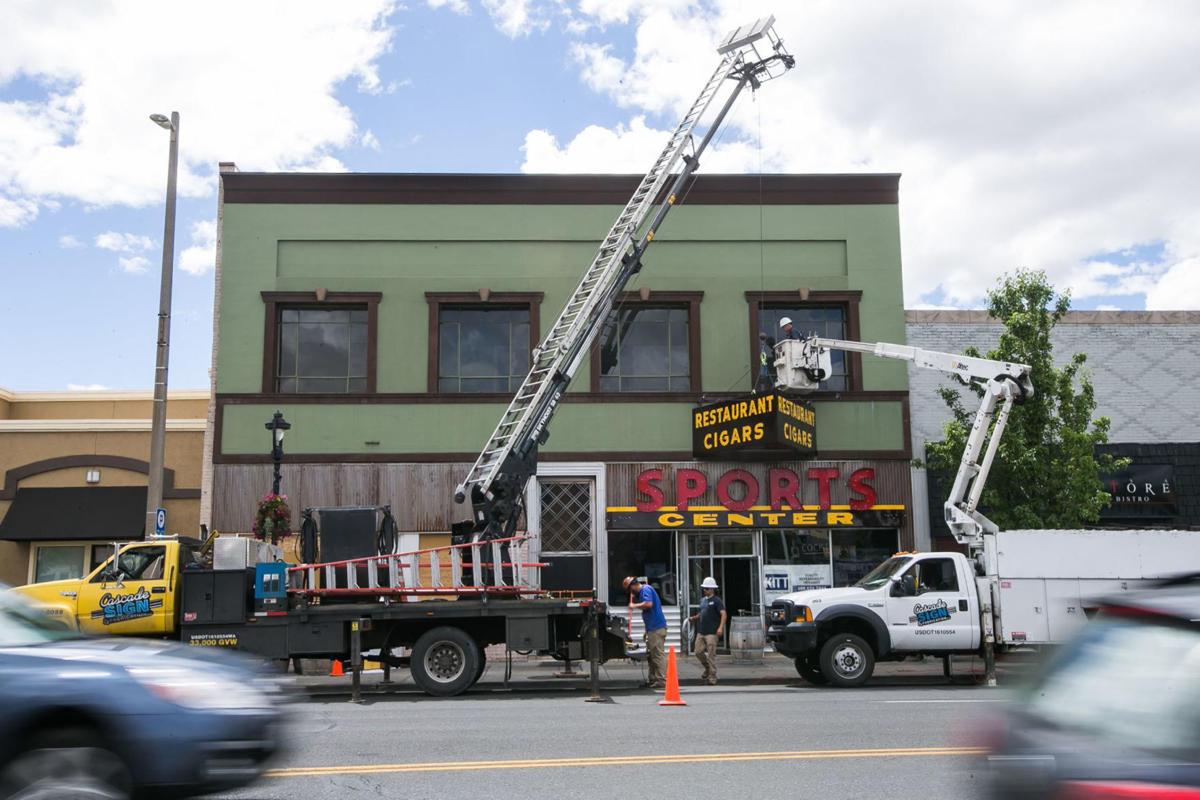 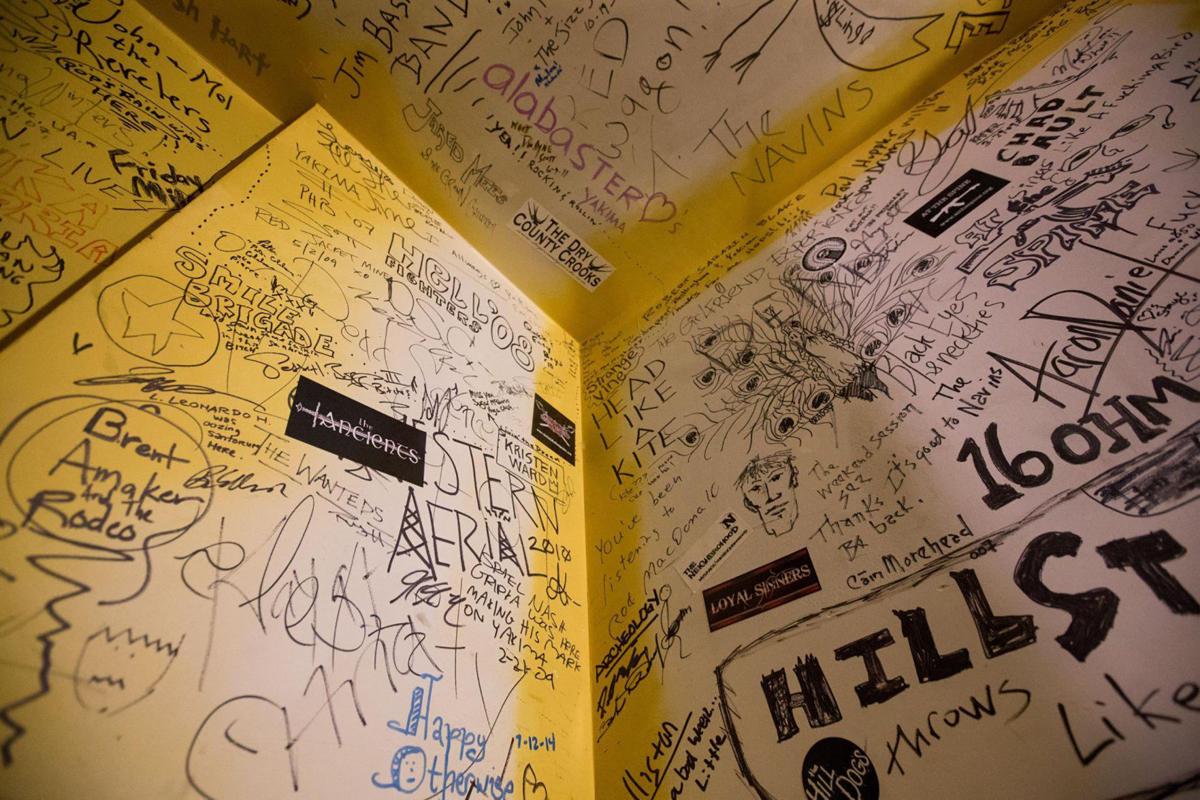 FILE—Signatures from bands are signed on the walls of a hallway below the stage at Sports Center in Yakima, Wash., Sunday, June 11, 2017. 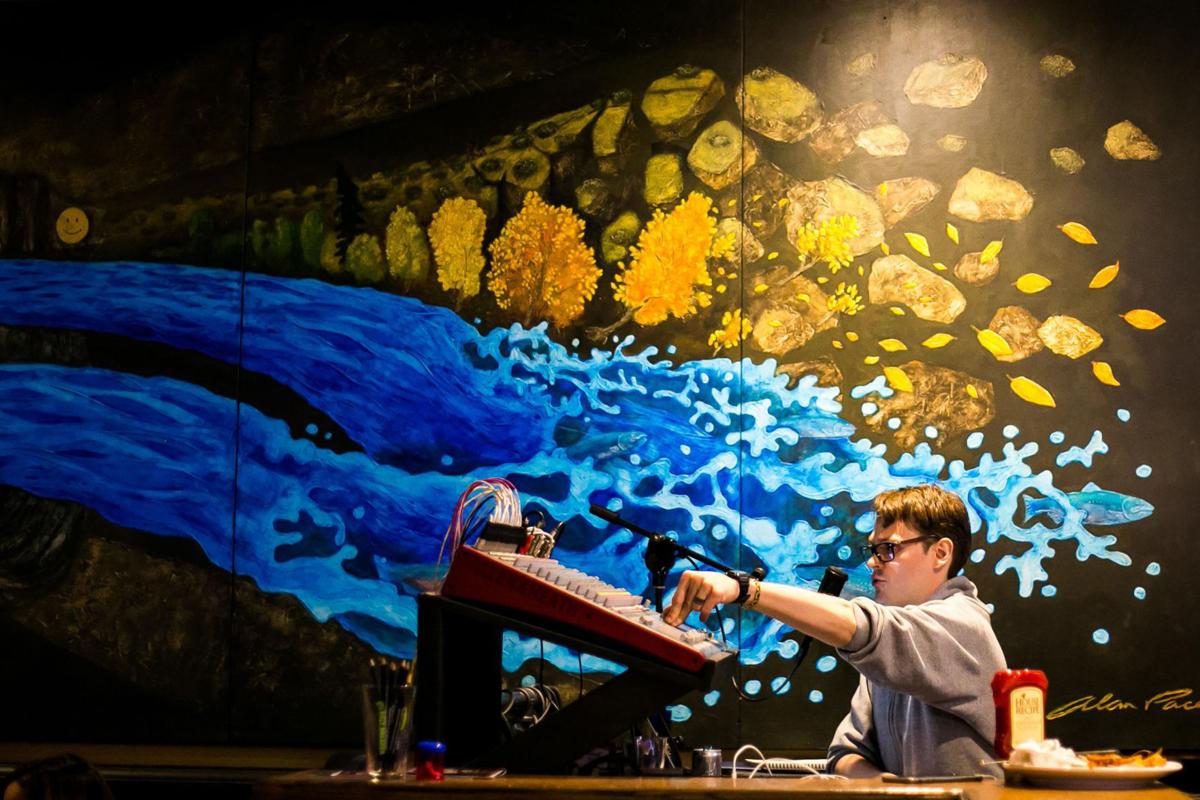 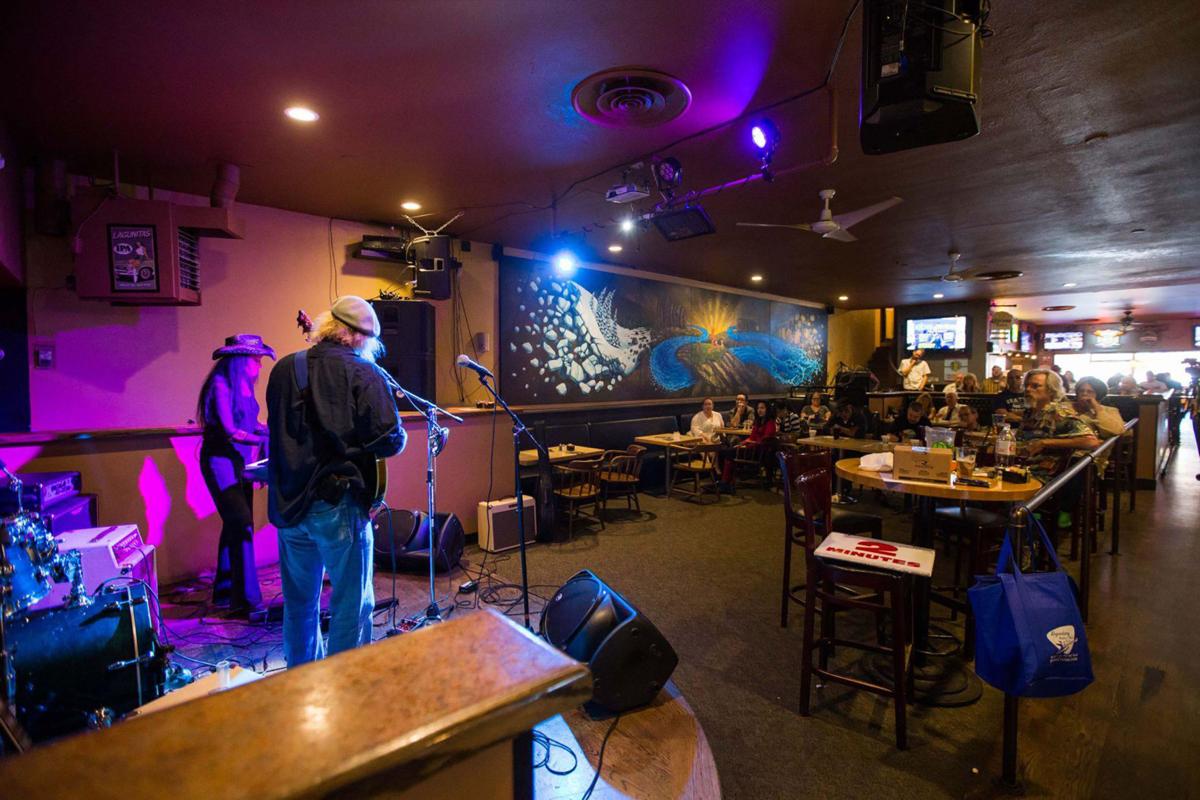 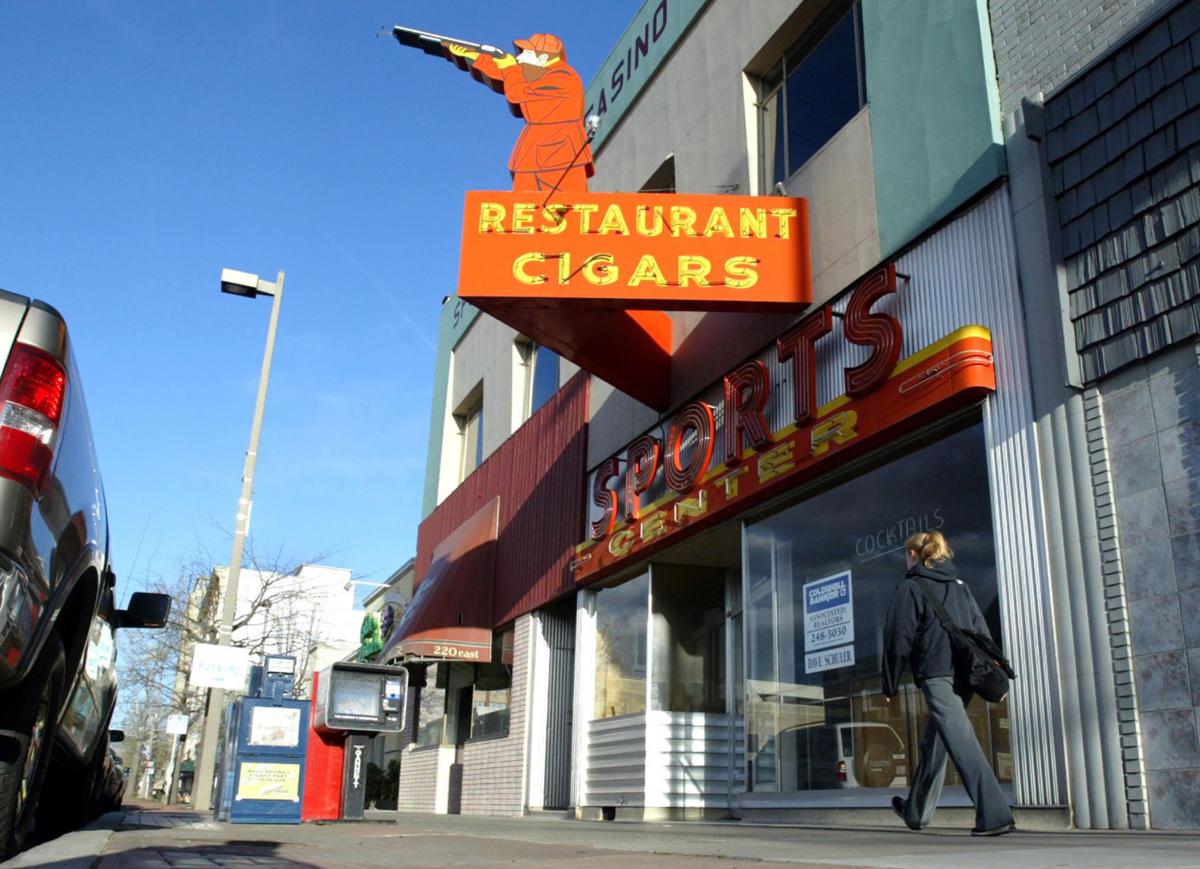 FILE—In this photo taken on Wednesday, March 24, 2004, a pedestrian walks by the front of the old Sports Center Casino building, which currently sits unoccupied and for sale on Yakima Avenue in Yakima, Wash. 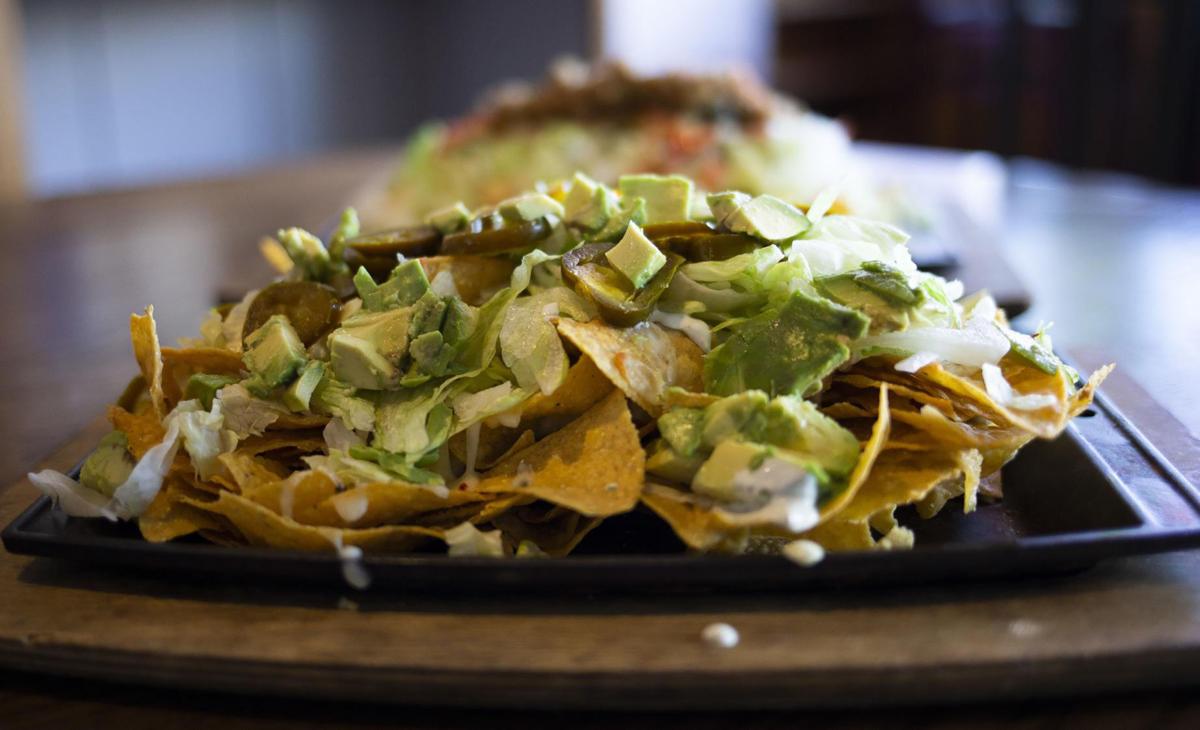 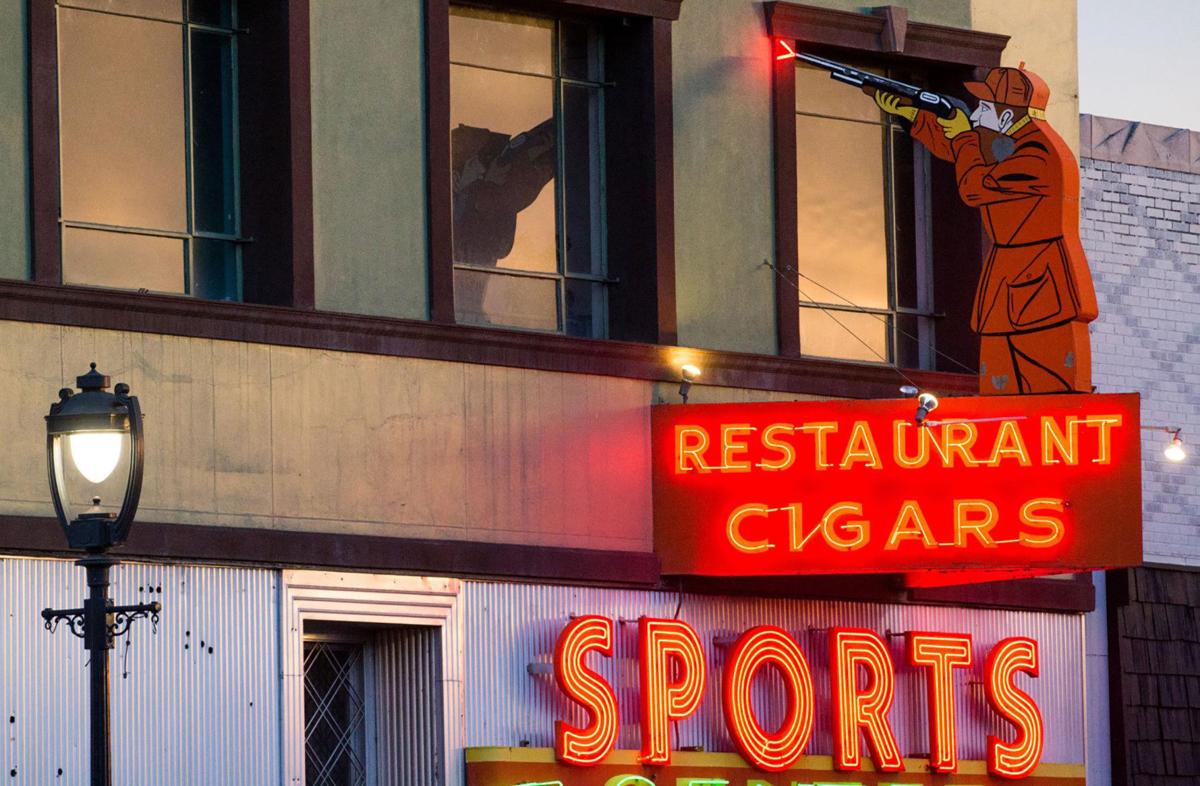 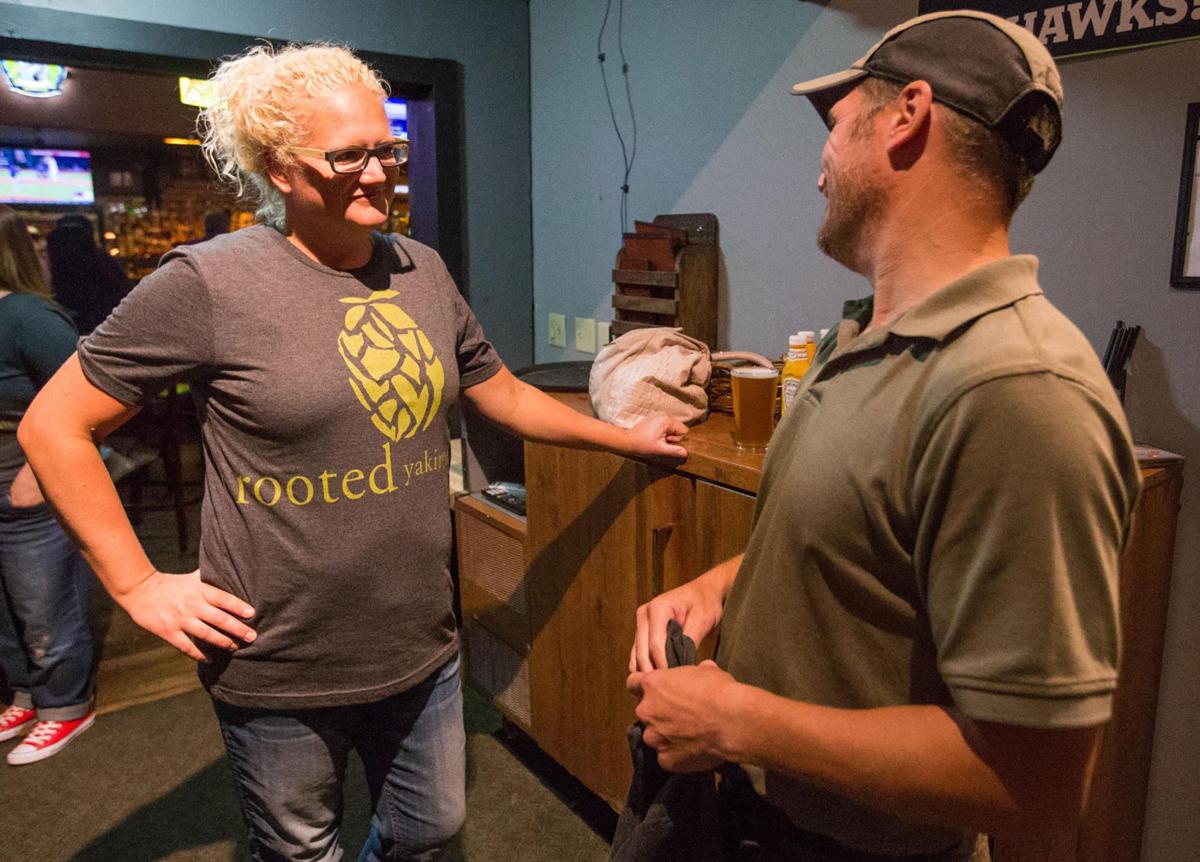 FILE—Stephanie Ketcham, left, tries on a Rooted t-shirt, with her husband, Wes Ketcham, right, during a hop harvest event at Sports Center in Yakima, Wash., Wednesday, Sept. 14, 2016. Rooted is a popular blog showcasing the Yakima Valley. 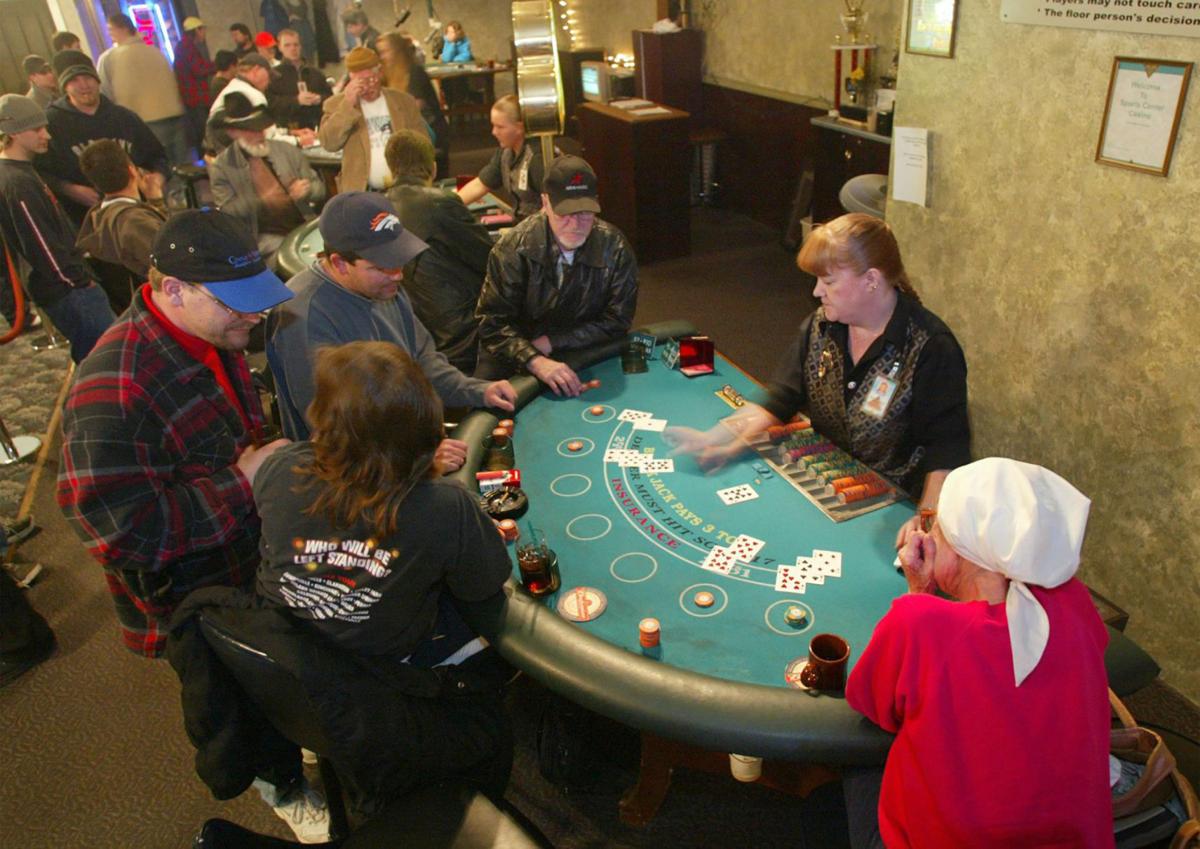 FILE—Patrons play poker at Sports Center Casino in downtown Yakima, Wash. Card rooms in Yakima, including the Sports Center, pay a tax of 10 percent of their gross revenues.

FILE—Signatures from bands are signed on the walls of a hallway below the stage at Sports Center in Yakima, Wash., Sunday, June 11, 2017.

FILE—In this photo taken on Wednesday, March 24, 2004, a pedestrian walks by the front of the old Sports Center Casino building, which currently sits unoccupied and for sale on Yakima Avenue in Yakima, Wash.

FILE—Stephanie Ketcham, left, tries on a Rooted t-shirt, with her husband, Wes Ketcham, right, during a hop harvest event at Sports Center in Yakima, Wash., Wednesday, Sept. 14, 2016. Rooted is a popular blog showcasing the Yakima Valley.

FILE—Patrons play poker at Sports Center Casino in downtown Yakima, Wash. Card rooms in Yakima, including the Sports Center, pay a tax of 10 percent of their gross revenues.

The wailing and gnashing of teeth you heard around Yakima on Sunday was premature: It’s true the Yakima Sports Center’s owners won’t reopen the iconic downtown Yakima bar and restaurant, closed since the beginning of the COVID pandemic last March, but it’s likely to live on under new ownership.

The closure was reported Sunday but the second part — that a group of Seattle investors including restaurateur Rich Radcliffe plan to take on the business — didn’t come out until Monday. In the interim, regulars and longtime staffers mourned its loss on social media.

“I spent the better part of a decade here,” longtime server and bartender Katie Crutcher wrote on Facebook. “Raised my babies here. Lived, loved and lost here. Yakima and Sports and hop industry go hand in hand. It will be back.”

The outpouring of emotion wasn’t surprising. That place means a lot to a lot of people. Since reopening in its current form in 2006, the Sports Center has been a key player in downtown Yakima’s post-mall cultural renaissance. It gave hip, young Yakima a place to congregate downtown back when there wasn’t really anywhere else. And, while several other spots competed for that market share over the intervening decade and a half, the Sports Center, with its instantly recognizable rotating neon duck-hunter sign, remained one of the primary see-and-be-seen spots for the city’s cool crowd.

“Being the age that I am, I didn’t realize what it meant to the community that’s between 21 and 40,” said 73-year-old Craig Carroll, who bought the business in 2012 and ran it until it closed for the pandemic. “I didn’t realize it was that important.”

Its importance became apparent pretty quickly once he started hanging out there. It had been established years earlier by the group that reopened it. The bar-restaurant, which dates to the 1960s, had become a full-time card room before going out of business in 2003. Upon reopening, it featured live music virtually every weekend for the first few years (and on and off in the years thereafter).

“We definitely created a scene,” said Chris Malland, one of the owners from 2006 to 2012. “Just the vibe, coming in on a Friday or Saturday night when there was a great band playing in the back and you couldn’t wait to pay your cover and get in there and check out the scene. It was cool. We could stand there and look out over the crowd and see everyone’s head bobbing to the music.”

Dan Craig, who booked artists for the Sports Center stage in those early years, had a huge hand in that. His connections to the broader Northwest music scene helped land acts such as The Long Winters, Slender Means, The Blakes, Travis Morrison and Tartufi — not the kind of bands that pack arenas, sure, but the kind that get write-ups in the hipster music press and the kind that weren’t playing Yakima at all prior to the Sports Center’s reopening.

“We knew we wanted to have live music,” Malland said. “But we were thinking singer-songwriter over in the corner with a guitar and a mic. But Dan Craig had approached me during the remodeling, and he changed our plan a little bit.”

Sara Shields, a regular customer since 2006 who tweeted in despair at Sunday’s closure news and hope at Monday’s potential reopening news, remembers those days hazily but fondly. There were a lot of great shows, she said, but the ones that stand out the most were those played by Head Like a Kite, the Seattle band that played a half-dozen or so Sports Center shows during that golden age.

“Those nights were always fun,” she said. “I can feel myself getting a bit weepy about it right now.”

That’s because it wasn’t just the music. Shields felt comfortable at the Sports Center in a way she doesn’t at other bars. The servers became friends. She met some of their best friends at the Sports Center. (“I think that’s where I first met you,” I told her. She replied, “I am 100 percent sure we met at the Sports Center.”) It got to the point where she could walk in and know there’d be friends inside to greet her, just like Norm on “Cheers.”

“But there wasn’t just one Norm at the Sports Center,” she said. “There were so many.”

Even aside from its own live music offerings, which waxed and waned over the years in terms of frequency and quality, the Sports Center was a center of cultural activity. If downtown Yakima were a high school, the Sports Center would have been its homeroom. Concerts at The Capitol Theatre or The Seasons Performance Hall were preceded by dinner at the Sports Center and followed by drinks at the Sports Center, with the performers themselves often wandering over from those other venues. If you were having a night out in Yakima, you’d get there eventually.

“I used to work at other restaurants,” Crutcher said. “And I would send people to the Sports Center for fun or food: ‘You can’t miss it; there’s a giant neon duck-hunter.’”

As an employee from 2012 until last year, she had an up-close seat as the bar became a focal point of the local hops scene. Its reputation among visiting brewers during the annual fall hop harvest meant the place would be crawling with hop industry and beer industry types every September and October. They would discover, as locals did back in 2006 or 2007, that the Sports Center had the best qualities of a dive bar — the lack of airs, the come-as-you-are sense of welcome — combined with top-shelf food and drink, she said.

Crutcher parlayed the relationships she made with those folks into her current job, doing customer relations for Yakima Valley Hops. It’s steadier work, with nights free so she can be with her family. She likes it. But if the Sports Center does indeed reopen as expected, she might still try to get the occasional bartender shift there.

“It’s been my home away from home,” she said. “The first place I went with my newborn son was the Sports Center, to let all the regulars hold him and introduce him to the staff who hadn’t been to my house to meet him yet. ... I could never say no to working there.”