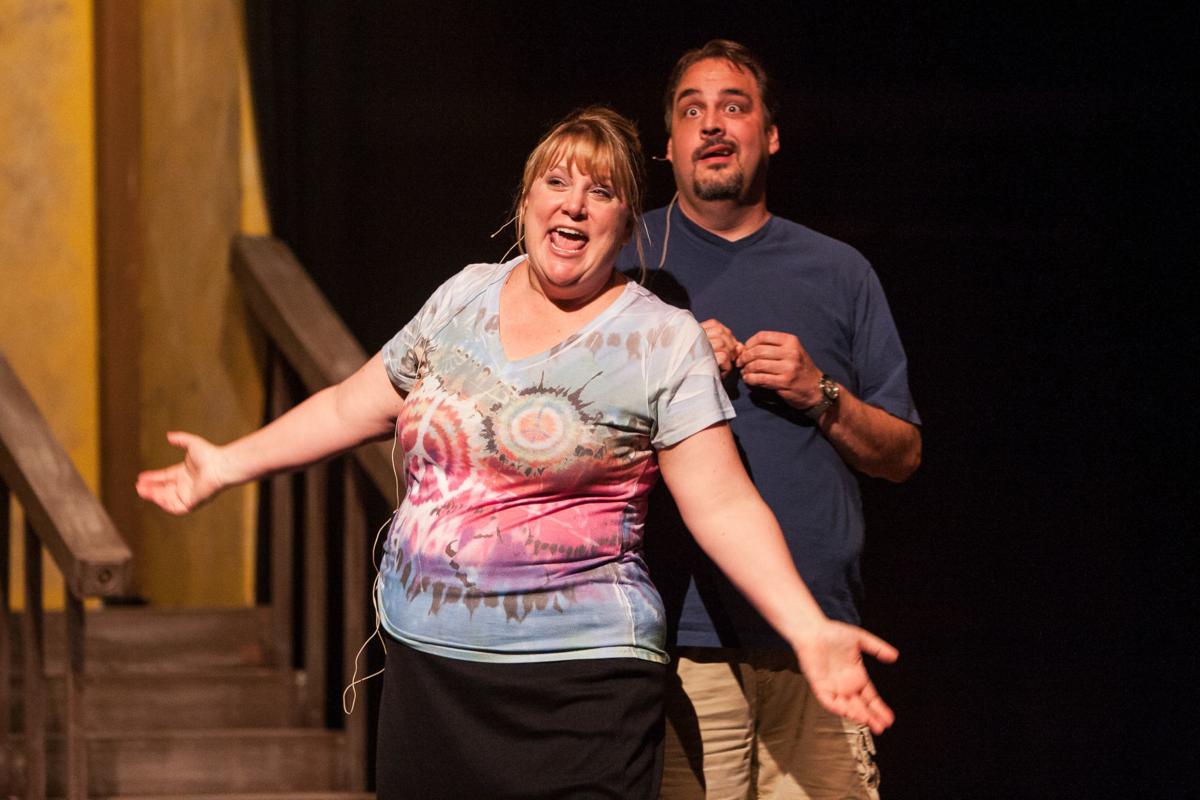 FILE—Julianne Goberville and Brian Van Dyke rehearse a scene for the production of “Hello Dolly” on July 9, 2012, at the Warehouse Theatre Company in Yakima, Wash. 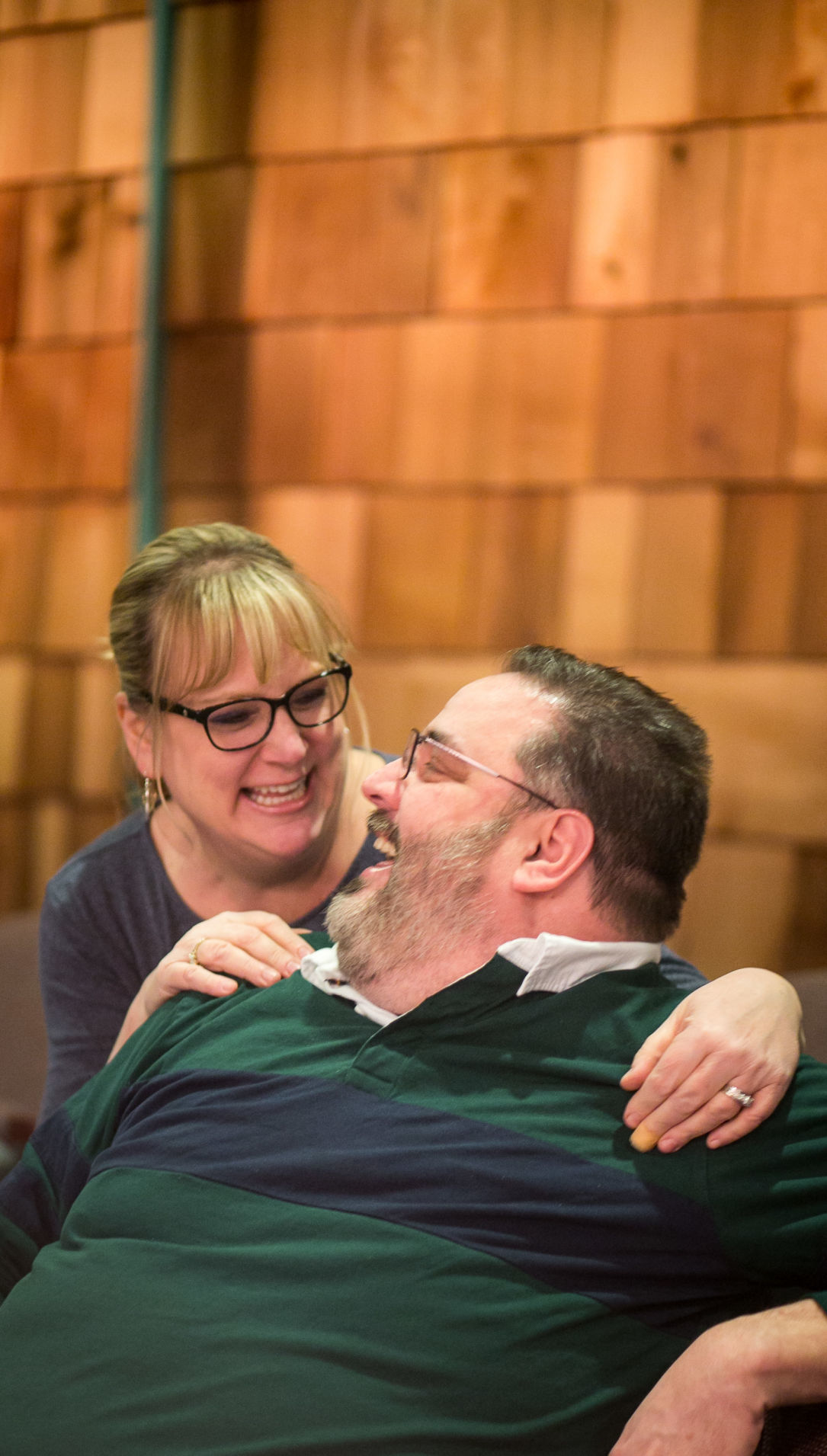 Julianne and Brian Van Dyke share a laugh together in the circle venue of the Warehouse Theater Monday, Feb. 10, 2020, in Yakima, Wash. 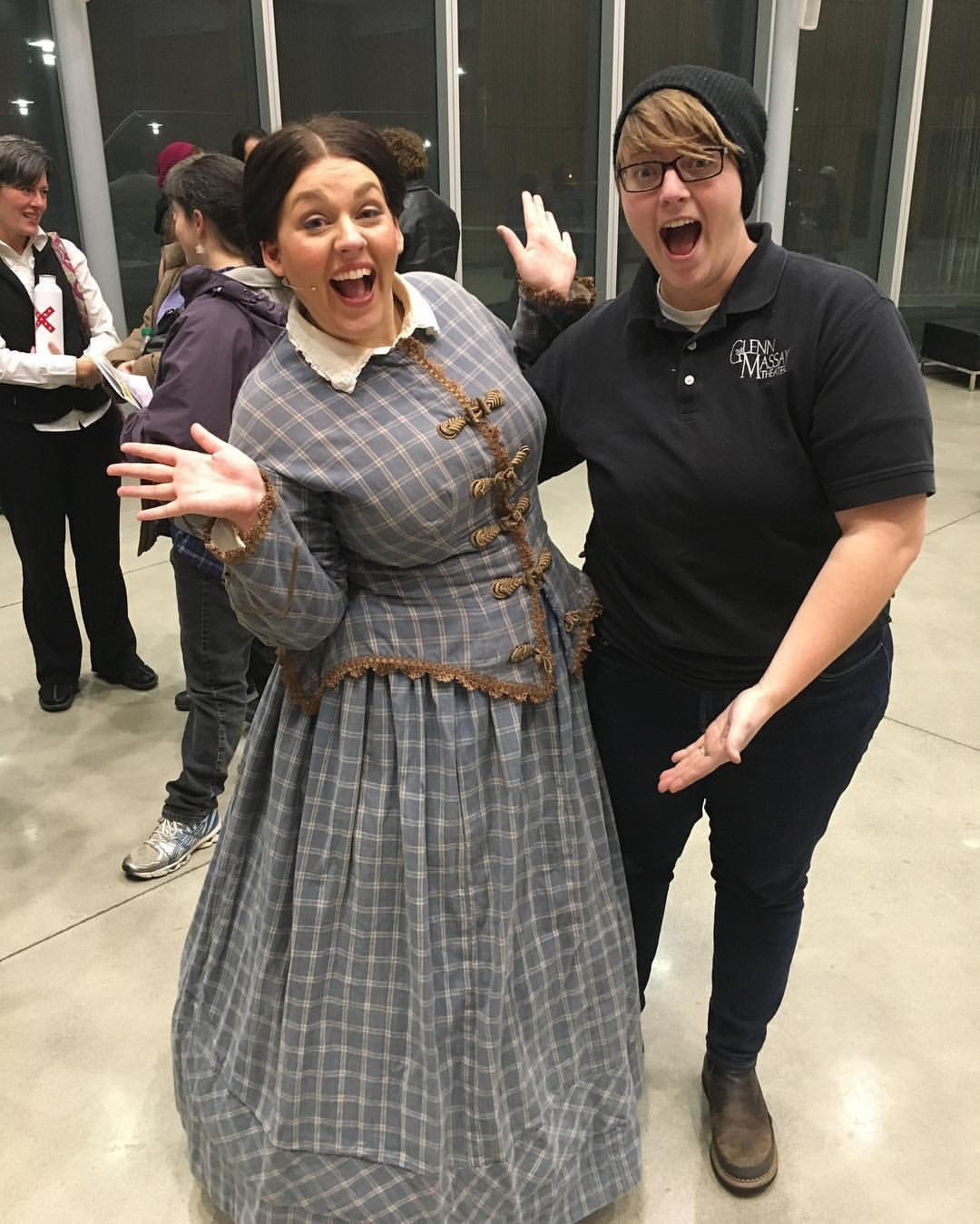 Ryan Clinkenbeard, left, and Kristen Clinkenbeard pose together outside a 2015 production of "Little Women" at the Glenn Massay Theater in Palmer, Alaska. The Clinkenbeards met in 2015 when both were involved with Yakima's Warehouse Theatre Company. They moved to Alaska in 2014 but returned to the Valley and to the Warehouse in 2017.

FILE—Julianne Goberville and Brian Van Dyke rehearse a scene for the production of “Hello Dolly” on July 9, 2012, at the Warehouse Theatre Company in Yakima, Wash.

Julianne and Brian Van Dyke share a laugh together in the circle venue of the Warehouse Theater Monday, Feb. 10, 2020, in Yakima, Wash.

Ryan Clinkenbeard, left, and Kristen Clinkenbeard pose together outside a 2015 production of "Little Women" at the Glenn Massay Theater in Palmer, Alaska. The Clinkenbeards met in 2015 when both were involved with Yakima's Warehouse Theatre Company. They moved to Alaska in 2014 but returned to the Valley and to the Warehouse in 2017.

Let’s get this out of the way right up front: The Warehouse Theatre Company is not a dating service.

You can’t just audition for a show, expecting to meet the love of your life; the company is designed to produce professional-level community theater, not happy couples. That said, a whole bunch of people have fallen in love working on Warehouse shows over the years. There’s Brian and Julianne Van Dyke, Kristen and Ryan Clinkenbeard, James and Gina Milliron, David and Jenny Marsh. The list goes on.

It makes sense if you stop to think about it. A Warehouse show brings together creative people with similar interests, puts them in close proximity for a couple of months of rehearsals and performances, and allows them to impress each other (to literally perform for each other) night after night.

Kristen Clinkenbeard (then Kristen Nagel) and her future wife, Ryan Clinkenbeard, both had Warehouse experience when they met at Gasperetti’s Gourmet Restaurant for Emily Stephenson’s (another Warehouse veteran) birthday party in February 2013. Kristen remembers vividly how Ryan entered the room and promptly knocked over a table full of glasses. Ryan, who has a knack for physical comedy in her Warehouse roles, took it in stride, playing what could have been an embarrassment for laughs. Kristen was intrigued.

Their romance had begun to blossom by the spring when they signed on to the Warehouse production of Steve Martin’s “Picasso at the Lapin Agile.” That show, their first opportunity to watch closely while each did her respective thing — Ryan as an actor, Kristen as stage manager — only heightened their mutual affection.

“It was nice because she was on stage and I wasn’t,” Kristen said. “So we were able to see each other do our own thing and celebrate that.”

Besides which, being involved in a theatrical production is inherently intimate, she said. There’s a bond that’s built over a very short time as people work toward a common purpose and learn to rely on each other.

“The nature of theater creates this intimacy,” Kristen said.

It’s a heady atmosphere, said Julianne Van Dyke, who met her husband, Brian Van Dyke, through the Warehouse Theatre. It’s easy to fall in love during the rehearsals for and production of a live show, she said. That’s why she took precautions when she first started to fall for Brian.

They had met back in 1996 as cast members of “The Boys Next Door.” Nothing happened at the time; everyone knew Brian was leaving for school in Portland after the run of the show. But there were some small sparks when they reconnected during the 2012 production of Neil Simon’s “Plaza Suite.” By that summer, when they were cast as Dolly and Horace in “Hello Dolly!” they were infatuated enough that they jokingly lobbied the show’s director, Stephen Clark, to add an onstage kiss.

“Our first kiss was really on stage,” Brian said, laughing.

But, knowing the atmosphere was heightened by the intimate nature of theater, Julianne (then Goberville) and Brian deliberately didn’t pursue a relationship during the run of “Hello Dolly!” They didn’t want to get wrapped up in each other, only for the magic to fade when the final curtain closed. But as soon as the show was over, they knew they had to give it a shot.

Julianne is 55 and Brian is 46. By 2012, they’d been around the block and knew what they wanted. So it didn’t take long after “Hello Dolly!” They were married less than a year later.

“I don’t like beating around the bush,” Julianne said. “And he had a great sense of humor. He was smart and witty. Boy, could he make me laugh. And make others laugh. That was attractive to me.”

As the years have passed since they got together, she’s seen those qualities on and off stage. They’ve directed each other in shows, allowing them to see one another excelling in something they love.

“The kids — I call anyone younger than me a kid — in the shows really love him,” Julianne said. “I’ve been able to see how he relates to them and how positive he is.”

That aspect of theater-centric romance has been a real treat for the Clinkenbeards. Kristen, 31, is primarily a behind-the-scenes person, stage managing or doing some sort of theater-tech work. Ryan, 30, is very much an actor (remember the knocking-over-the-glasses story). So they’re never on stage together; they actually get to watch each other work. For Kristen it’s a reminder of the Ryan she first saw and wanted to get to know.

“I see her every single day — the way she is with the kids and in daily life — but then you get to see these glimpses into this other part of her that I absolutely love,” Kristen said. “Those moments in time are special.”

The Warehouse Theatre Company creates those moments with every show. The cast of the current production, “Becky’s New Car,” which opens Friday, doesn’t have any lovebirds in it (though director Vance Jennings and his wife, Sandy, have spent the past quarter-century setting an example of what a loving theater couple looks like). It can still be the catalyst for love, perhaps among the audience. The company, after all, is not a dating service. But its shows make for a pretty good date.