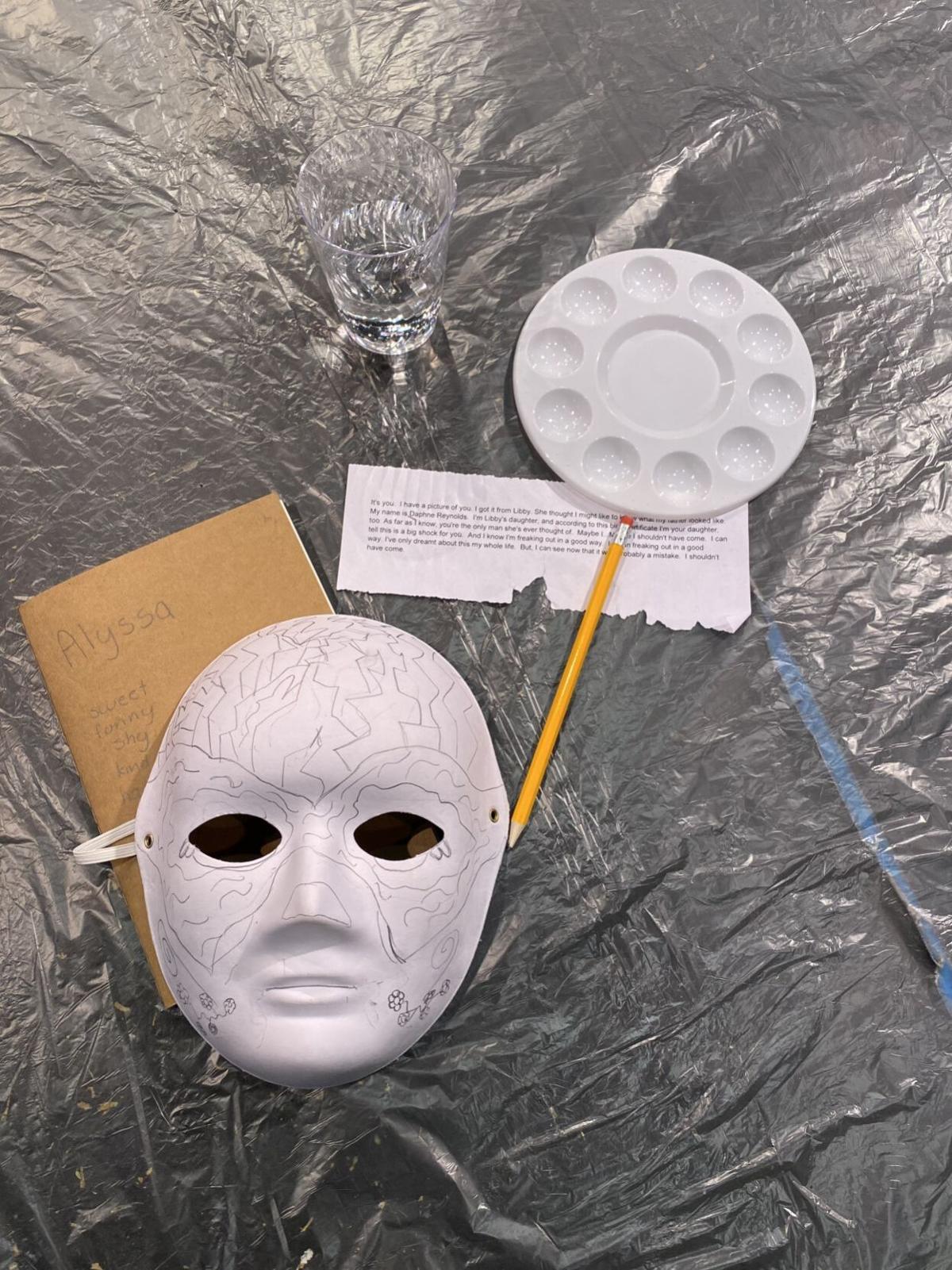 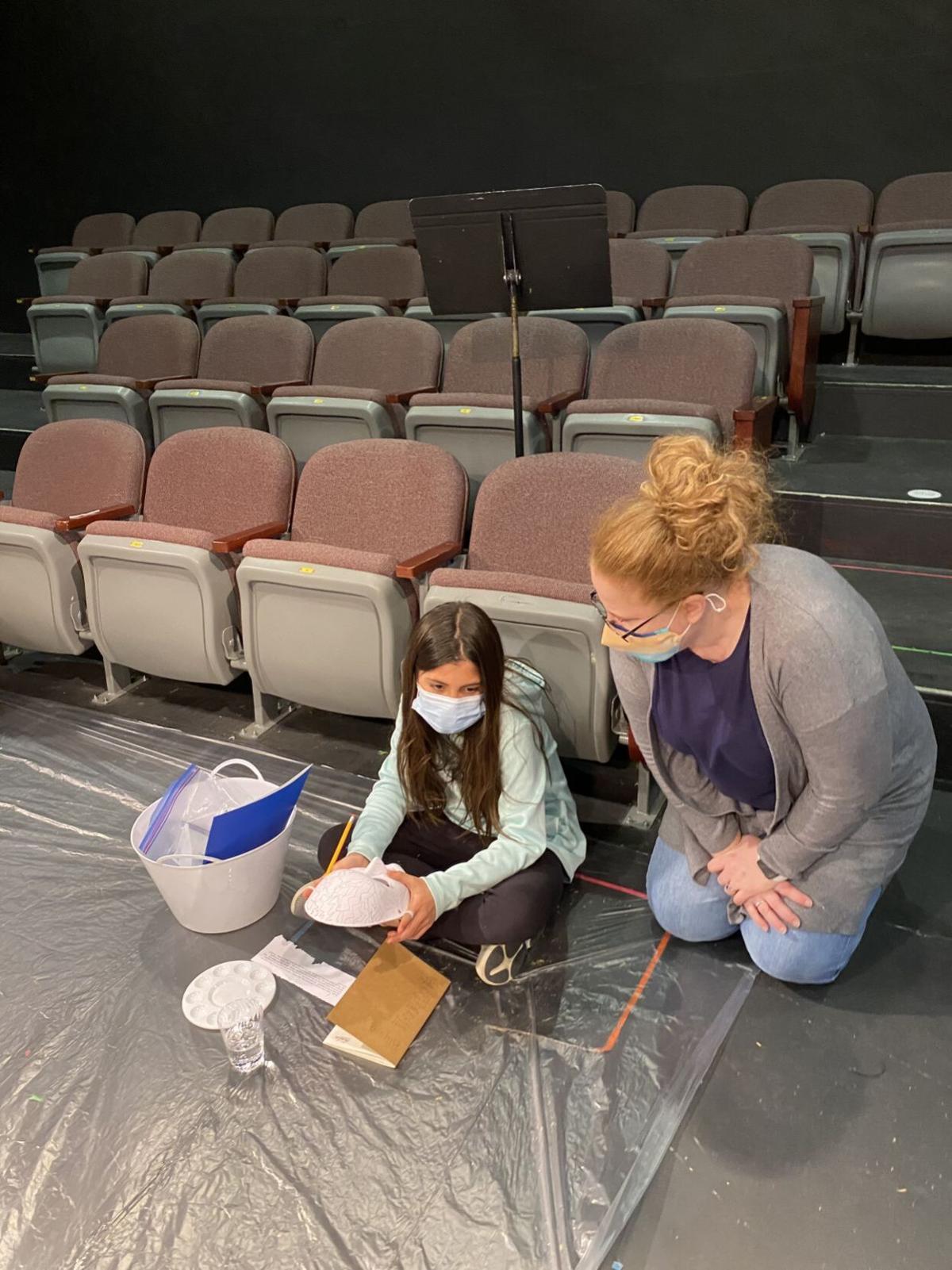 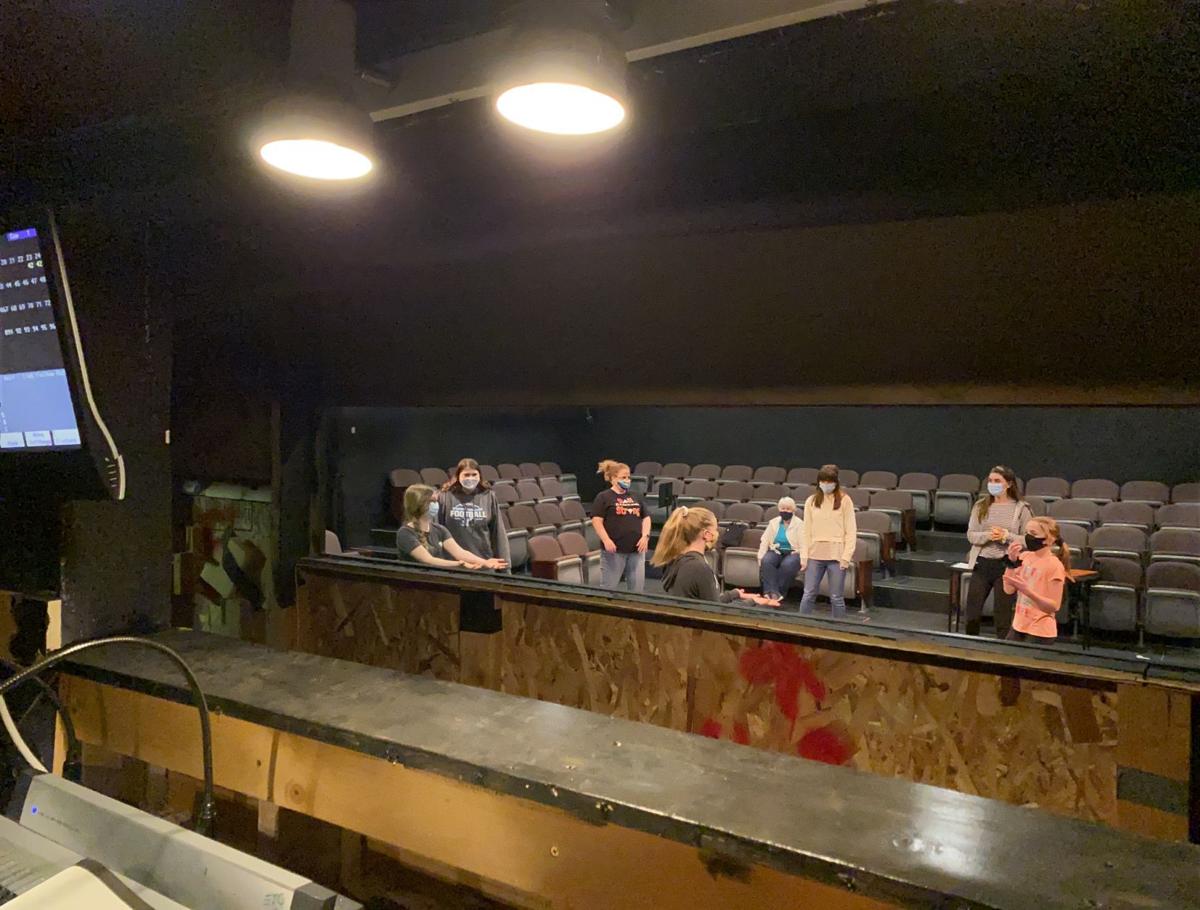 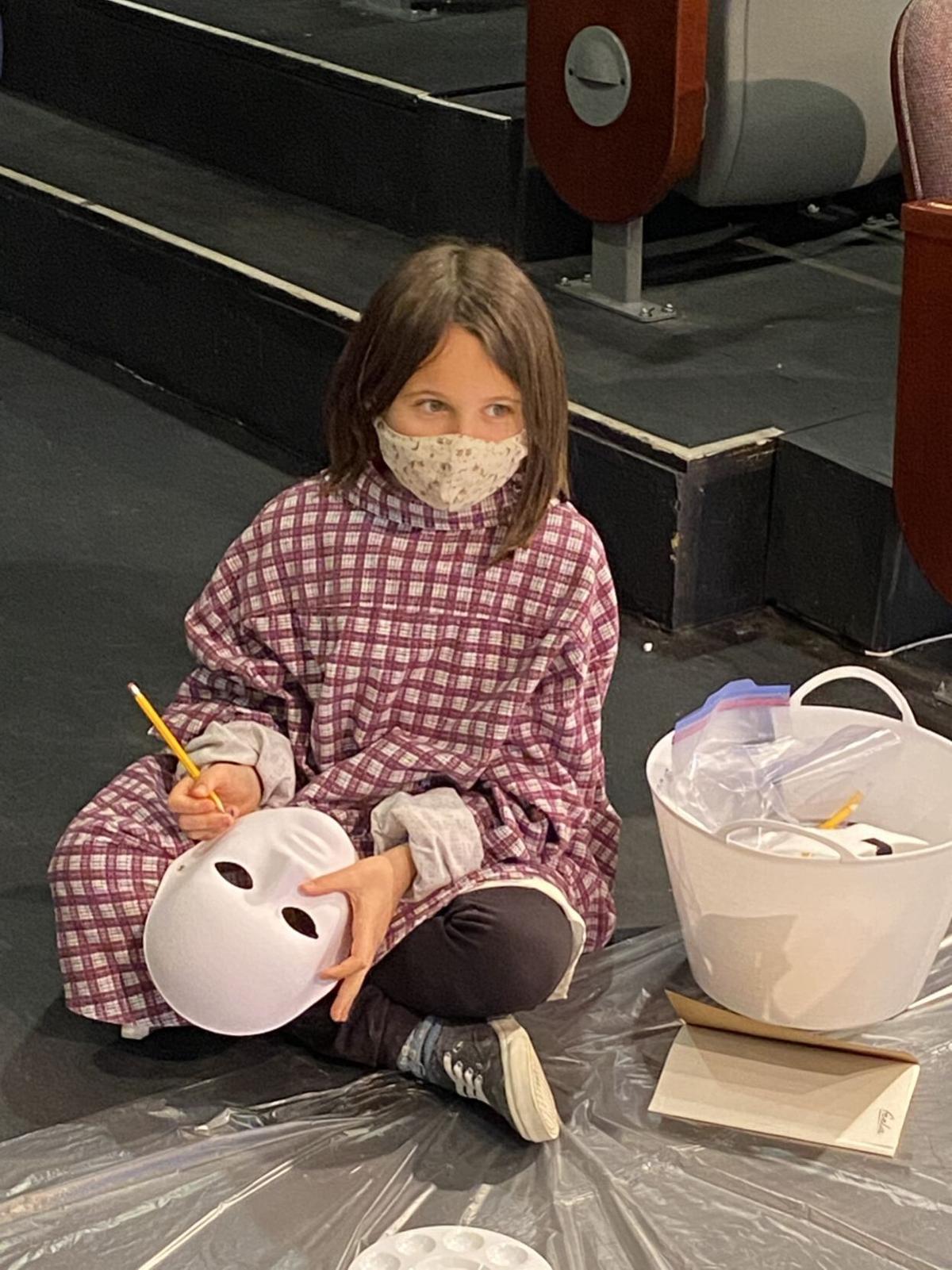 Eleanor Matson ponders what to add to her character mask. 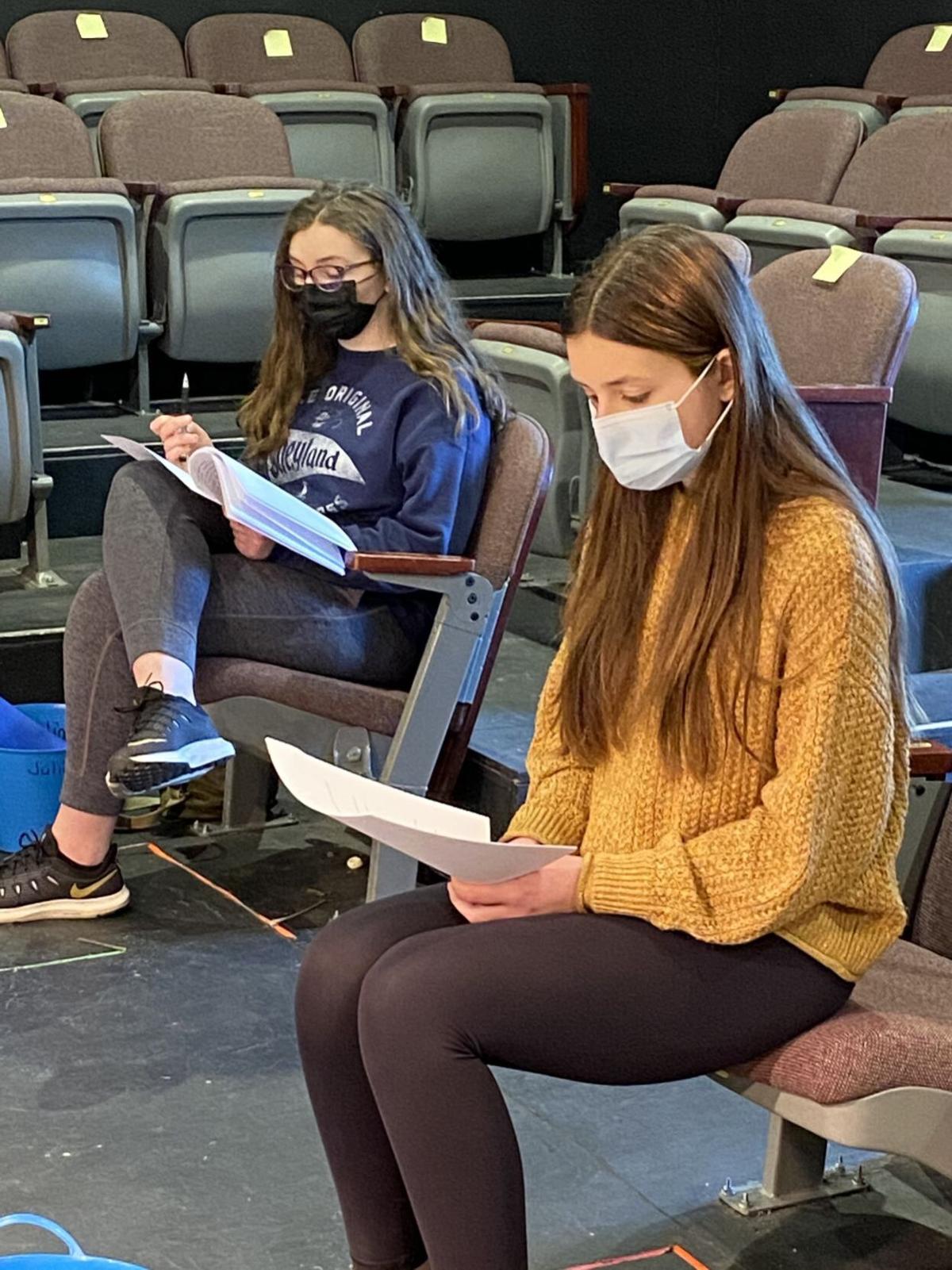 Julia Snow and Ava Ferguson act as narrators for a radio drama. 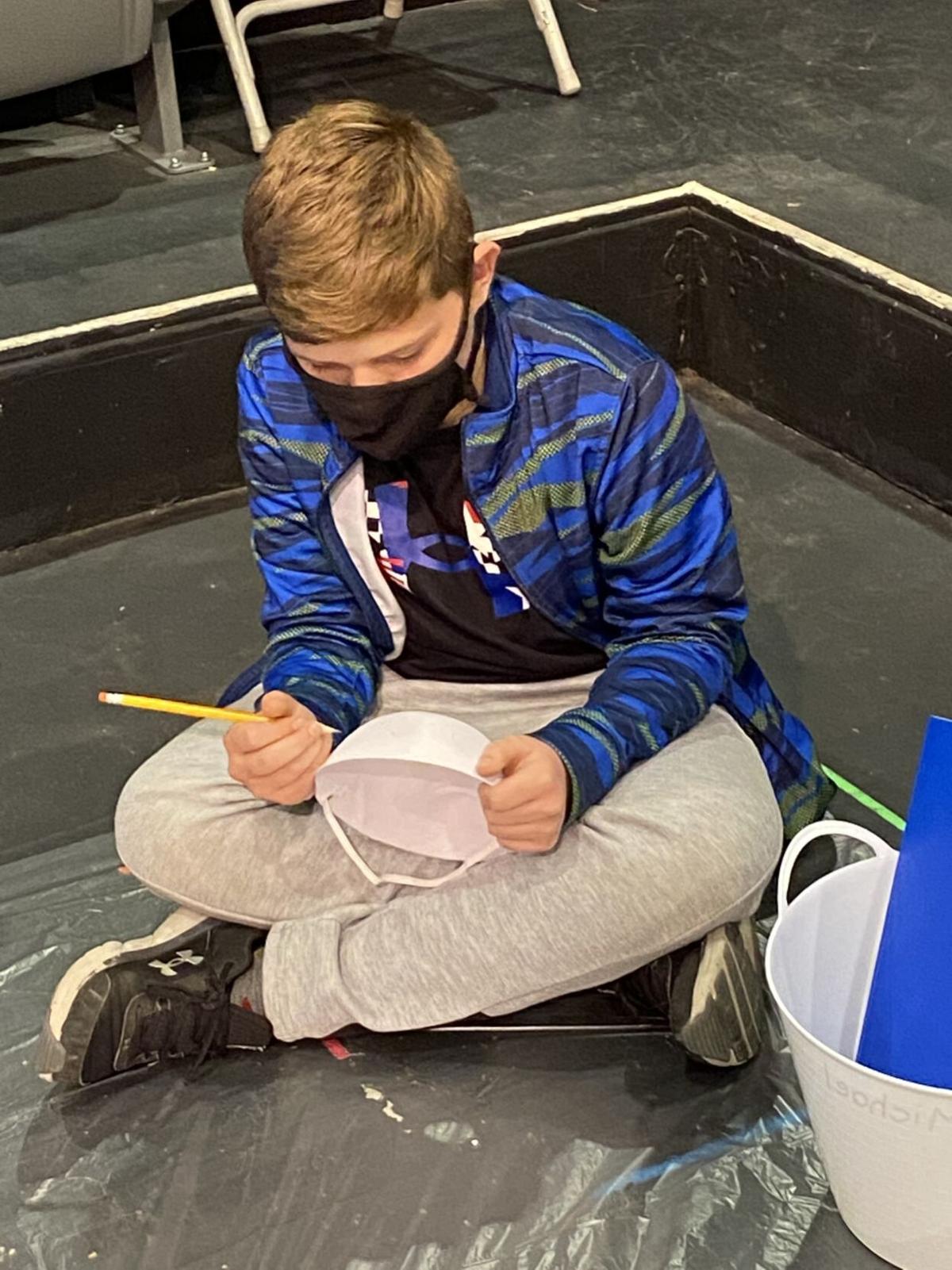 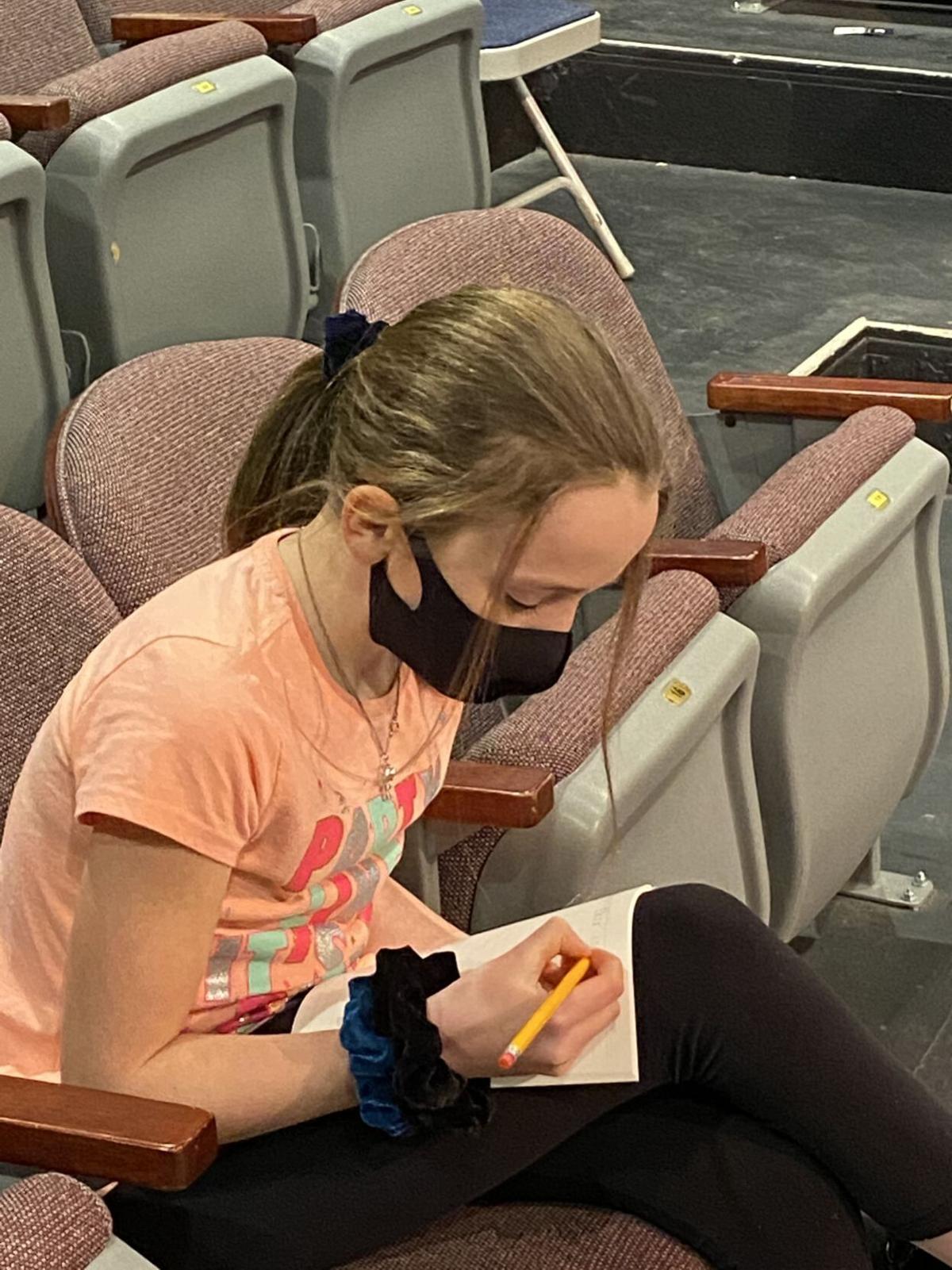 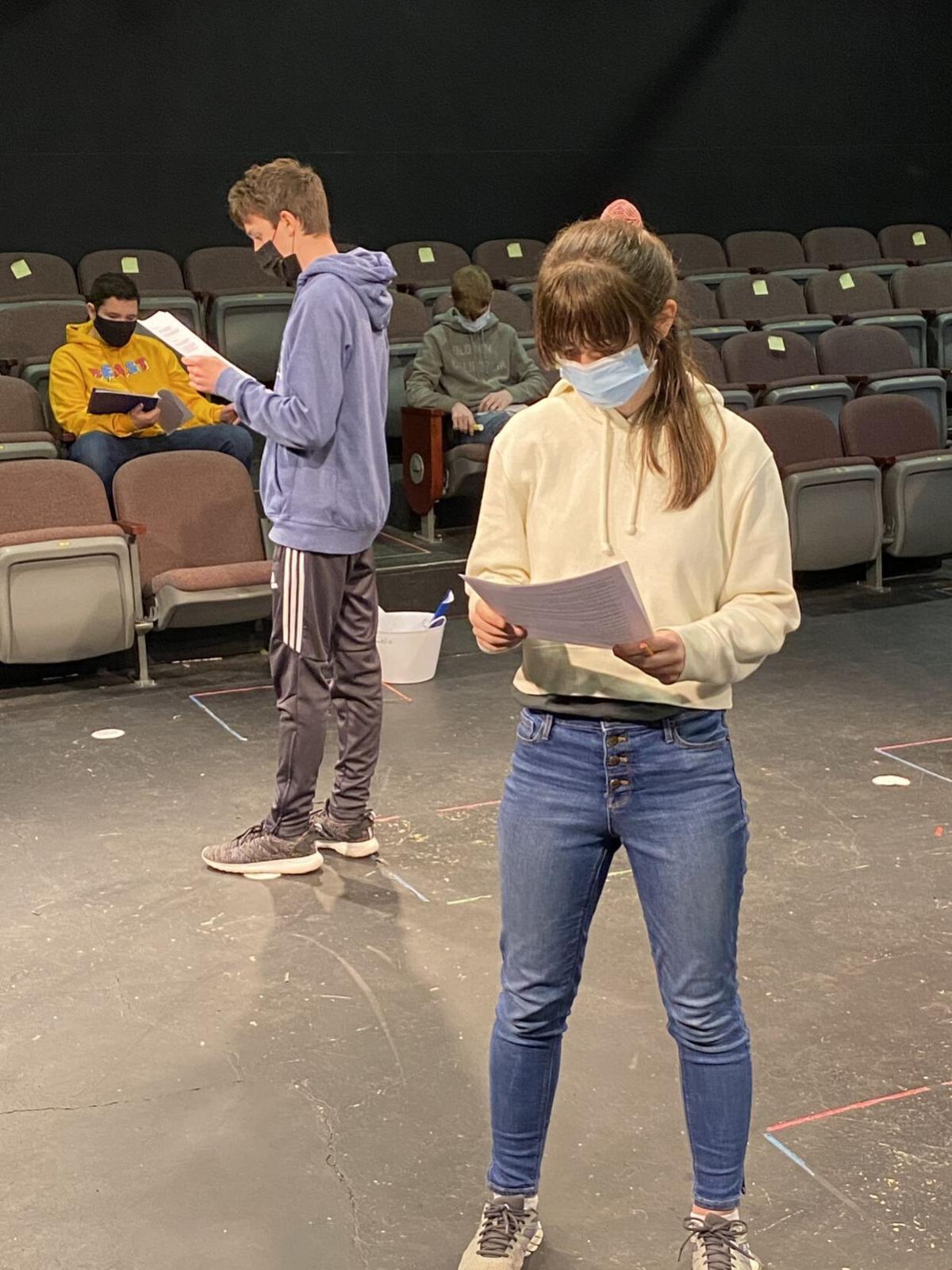 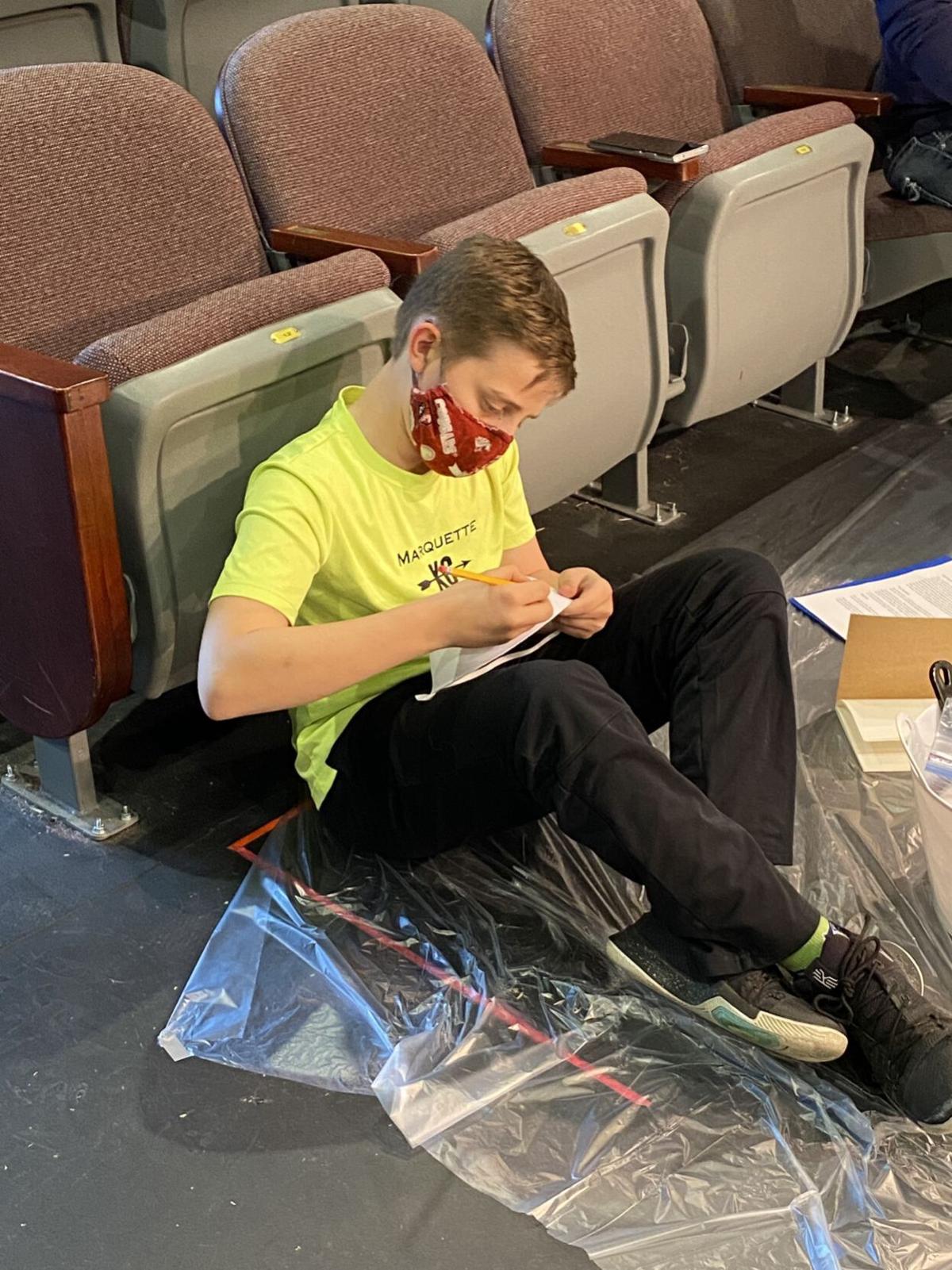 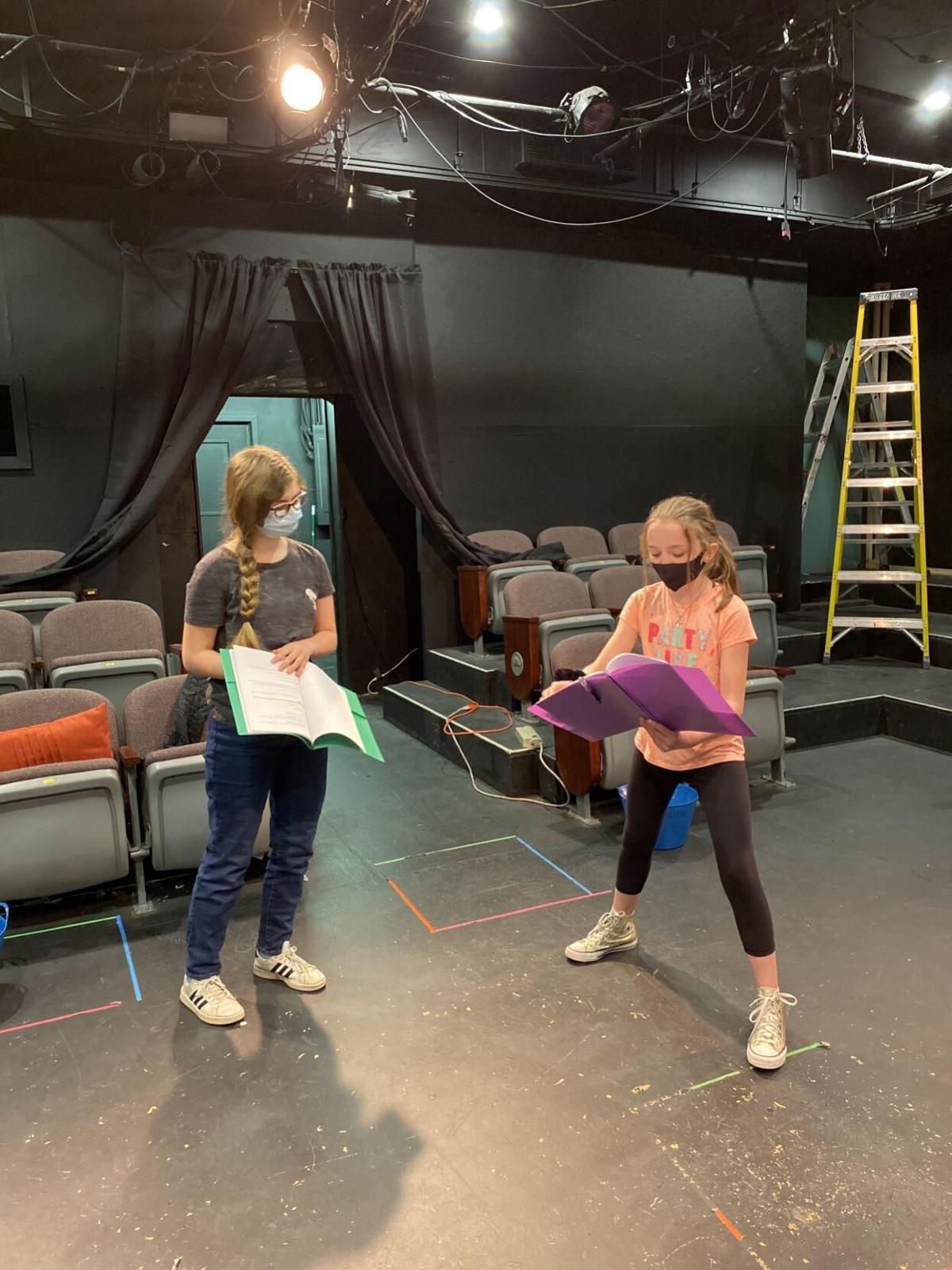 Madeleine Sevigny and Olivia Snow rehearse their scene during the Thursday night class.

Eleanor Matson ponders what to add to her character mask.

Julia Snow and Ava Ferguson act as narrators for a radio drama.

Madeleine Sevigny and Olivia Snow rehearse their scene during the Thursday night class.

Six youngsters ranging in age from 13 to 17 stand facing each other in a circle. Each one is at least 6 feet away from the next. Their noses and mouths are covered by thick cloth masks in an array of colors and designs. The only part of each face seen by the others is a pair of eyes. Two adults join the circle in random places. They too are distanced and masked.

The adults begin to put the kids through their paces: stretching exercises, tongue twisters, vocal drills, head-to-head games of concentration. Their voices are muffled as they recite vocal warm-up exercises. The pace and intensity gradually increase, and a premium is placed on focus. Clearly, there are expectations here.

And through it all, a familiar but infrequent sound these days: laughter. The joy in the room is palpable, and the tone is one of equal parts relief and release. For the next 90 minutes, everyone in the room embraces the moment and ignores their troubles.

This is a Wednesday night session of the Warehouse Theatre Kids’ Company theater class. Seven other youngsters had a similar experience the night before. Four more will have a go at it on Thursday. In all, 20 young people between the ages of 10 and 18 are involved.

The young performers are engaged in monologue and scene work, character analysis and radio dramas. Some create theatrical masks to represent the key feelings and emotions of the person they’re portraying. Others focus on the vocal qualities needed to help an audience connect to their work. All discuss choices made to bring their character to life. And to allow proper air circulation, they periodically throw open the doors to head outside for mask breaks and theater games.

Warehouse company veterans Ruth Veselka and Brandon Lamb have volunteered their expertise — and considerable teaching skills — to conduct these sessions throughout the month of March.

“It is just so wonderful to work with these young actors and to know they’re being nurtured, not just artistically but emotionally as well,” says Veselka, an English and theater teacher for the West Valley School District. “We want this to be a place of fun and exploration.”

“Theater arts allows students an opportunity to gain great communication and public speaking skills, but also serves as a creative outlet to escape their everyday stresses,” he says. “I want to make sure the kids know we care about them and their well-being.”

If 15-year-old participant Julia Snow is any indication, the message is getting through.

“It just feels so good to be in a safe space with people I know, doing something I love,” says the Davis sophomore. “I feel happiness. It’s really ... snazzy. You can quote me.”

The WTC children’s theater committee originally planned a partnership with Seattle Children’s Theatre to offer a one-week spring break drama camp last April; their respective COVID closures forced postponement. In a “What now?” brainstorming committee meeting in October, the mother of three young actors expressed the feelings of isolation and loneliness her kids were feeling due to the pandemic. That’s all it took to get things rolling. Within an hour, the Warehouse Theatre Kids’ Company was born.

Veselka volunteered to lead the first group through virtual theater experiences to create online holiday programming. That venture was a success, so as the region moved into Phase 2 of reopening, plans were hatched to safely bring the kids together for in-person experiences. Doing that meant splitting into smaller groupings, requiring another instructor. As a longtime WTC director known for working extremely well with child actors, Lamb was asked to help teach. He leapt at the chance.

“At Naches, we started this school year teaching all online,” he says. “The greatest asset of in-person learning that we didn’t have online is human interaction. It’s so important, especially in the arts.”

These groups are considered a first step toward a bigger and better program. The lessons learned from these early works will serve to shape a sustainable and ongoing program. As health restrictions continue to ease, more young people will be able to take part. The long-term aim is to move from working with this handful of kids who have done Warehouse shows before to holding sessions for youth from all over the Valley.

“Hopefully, some of these young people will take on a teaching role in the future,” says Veselka.

Lamb shares that vision. “It’s like I told the students tonight,” he says. “‘We’re doing this for you because you are the future of this company.’”

Judging from these performers, that future looks bright.

Vance Jennings is executive director of the Warehouse Theater Company. The company contributes a column in Thursday’s SCENE every four weeks.