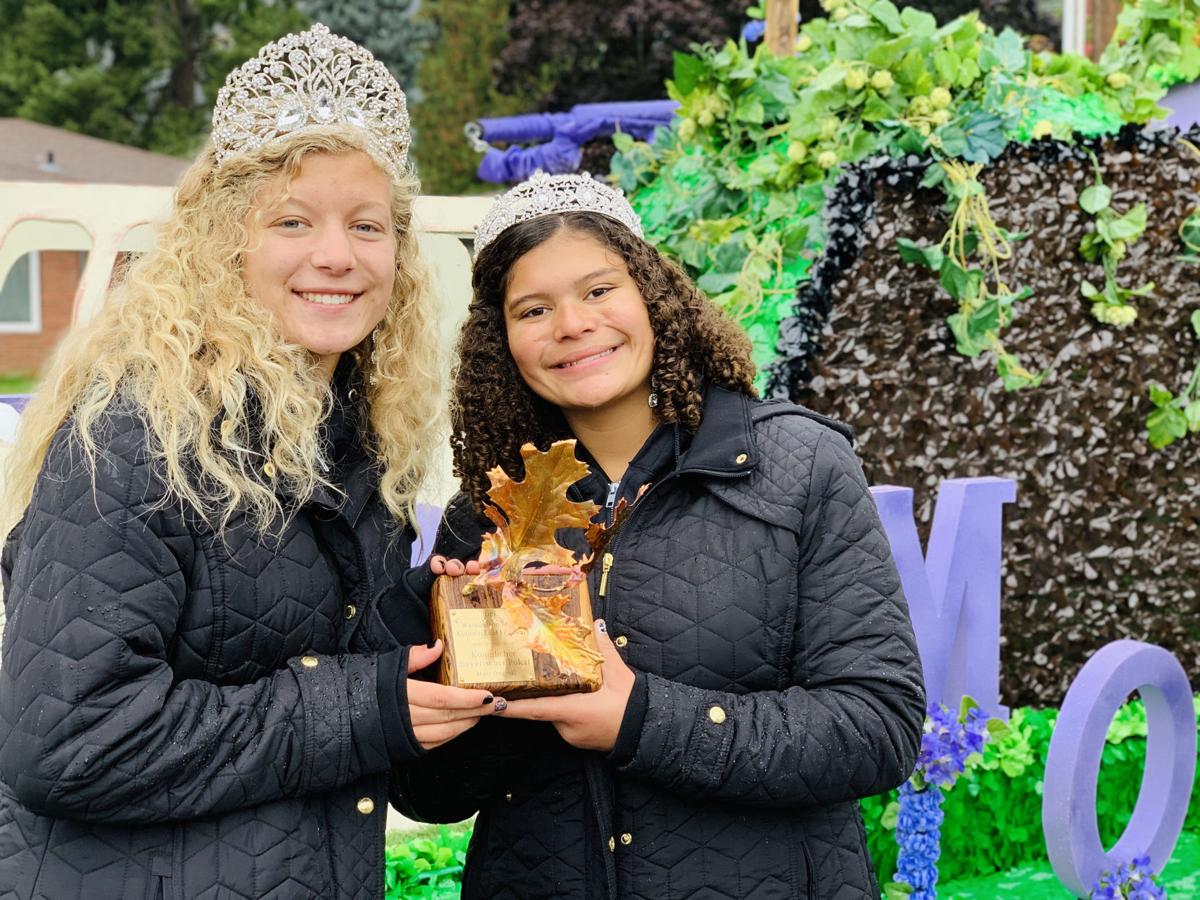 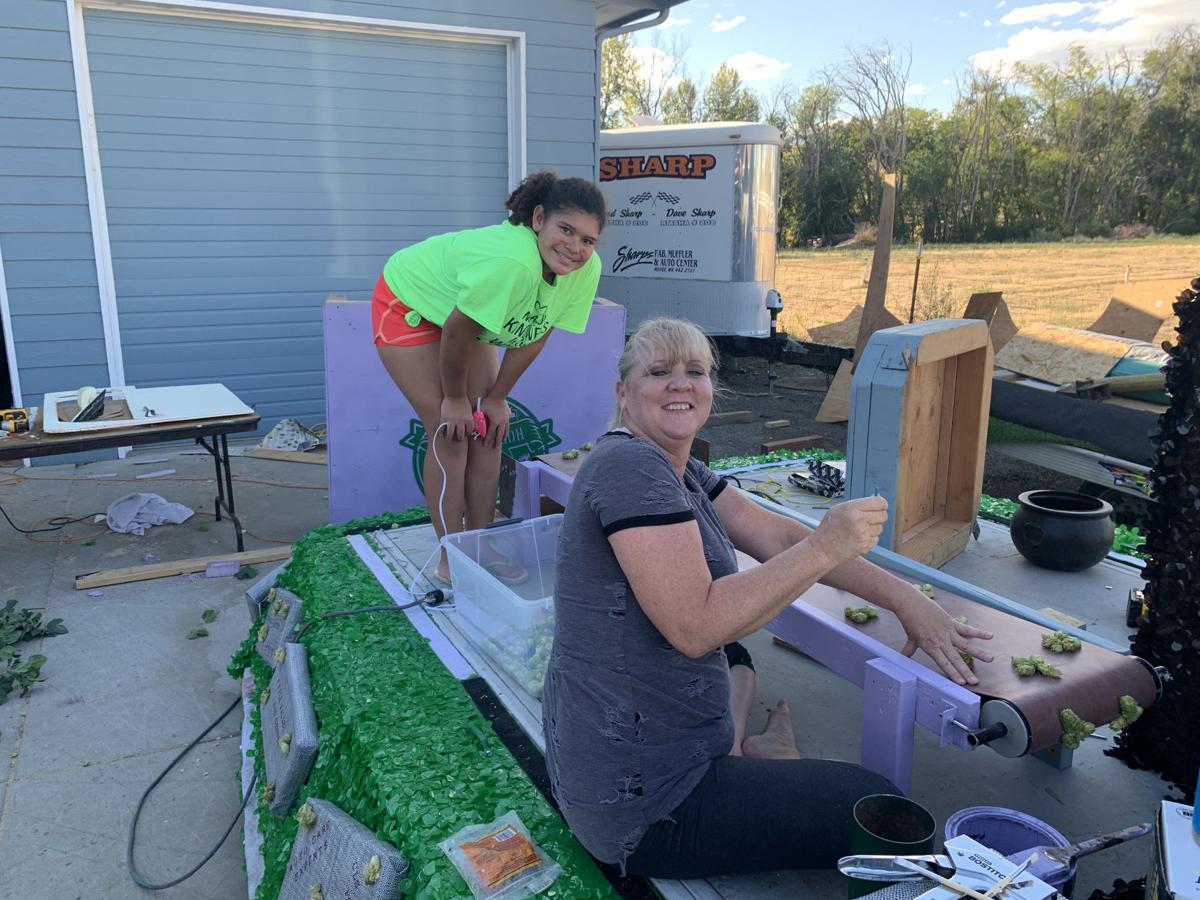 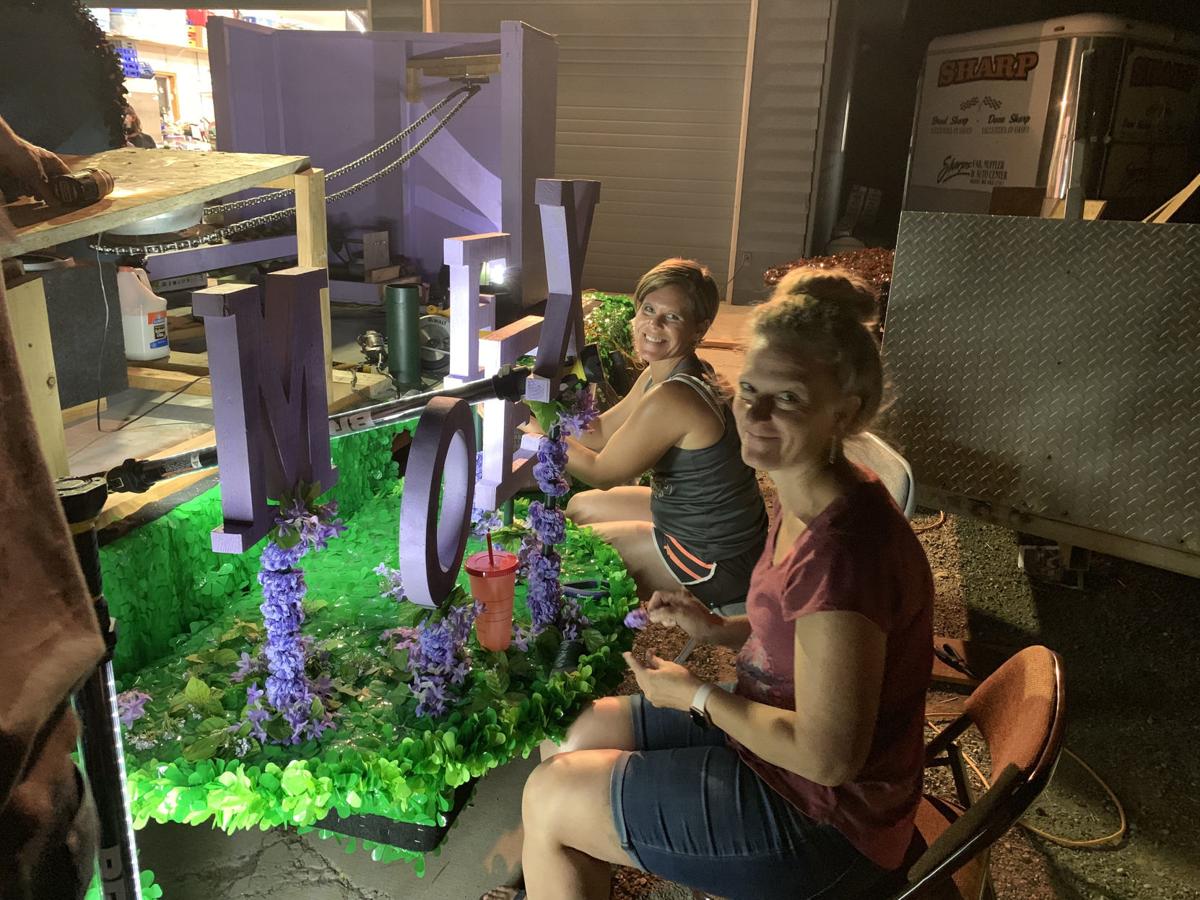 Leira’s mom Didi Schibig on the left, with Sophie’s mom Mardell Newhouse, working on the float late into a summer night. 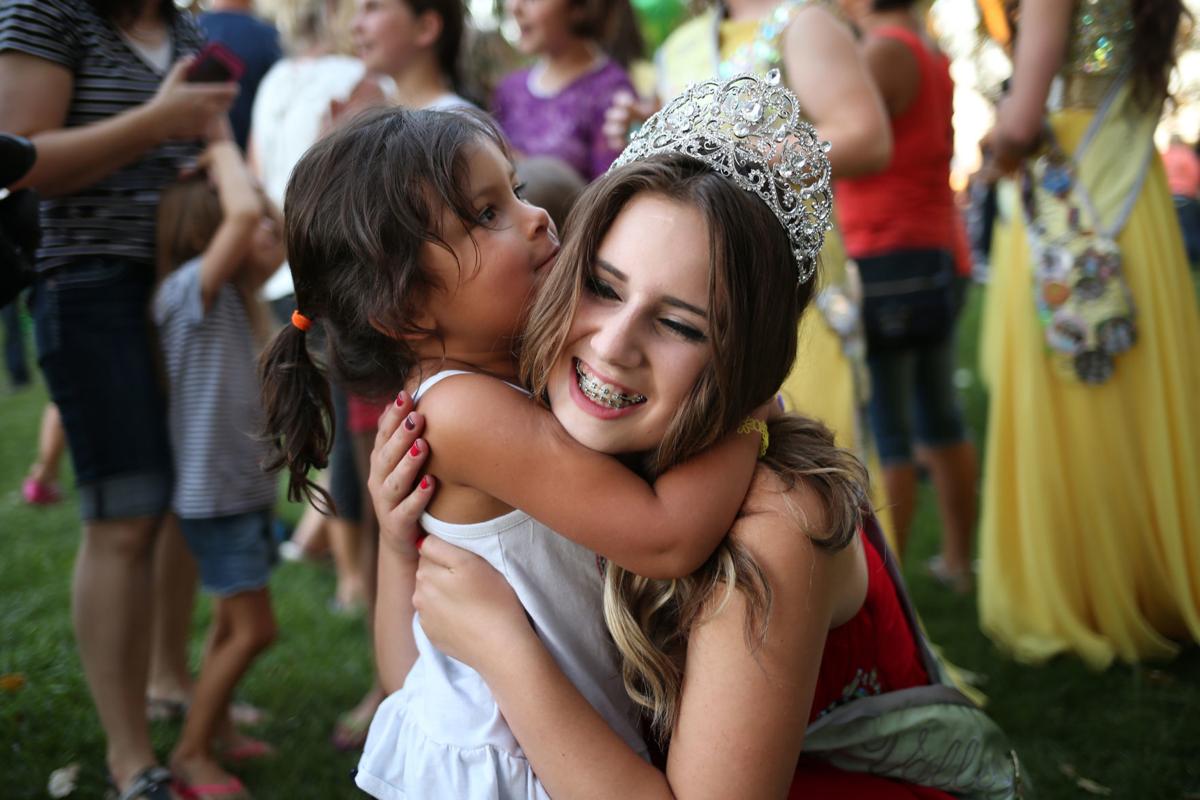 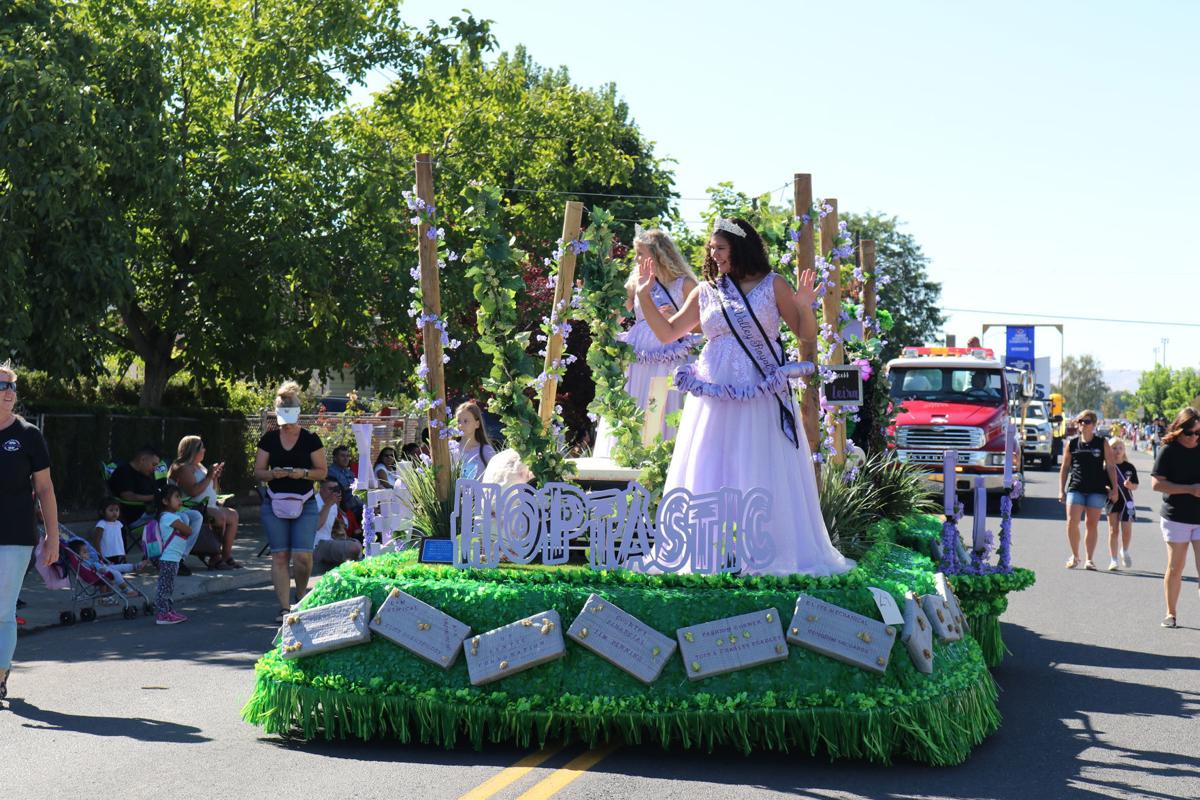 Sophie and Leira wave to the crowd at the Wapato parade this summer. 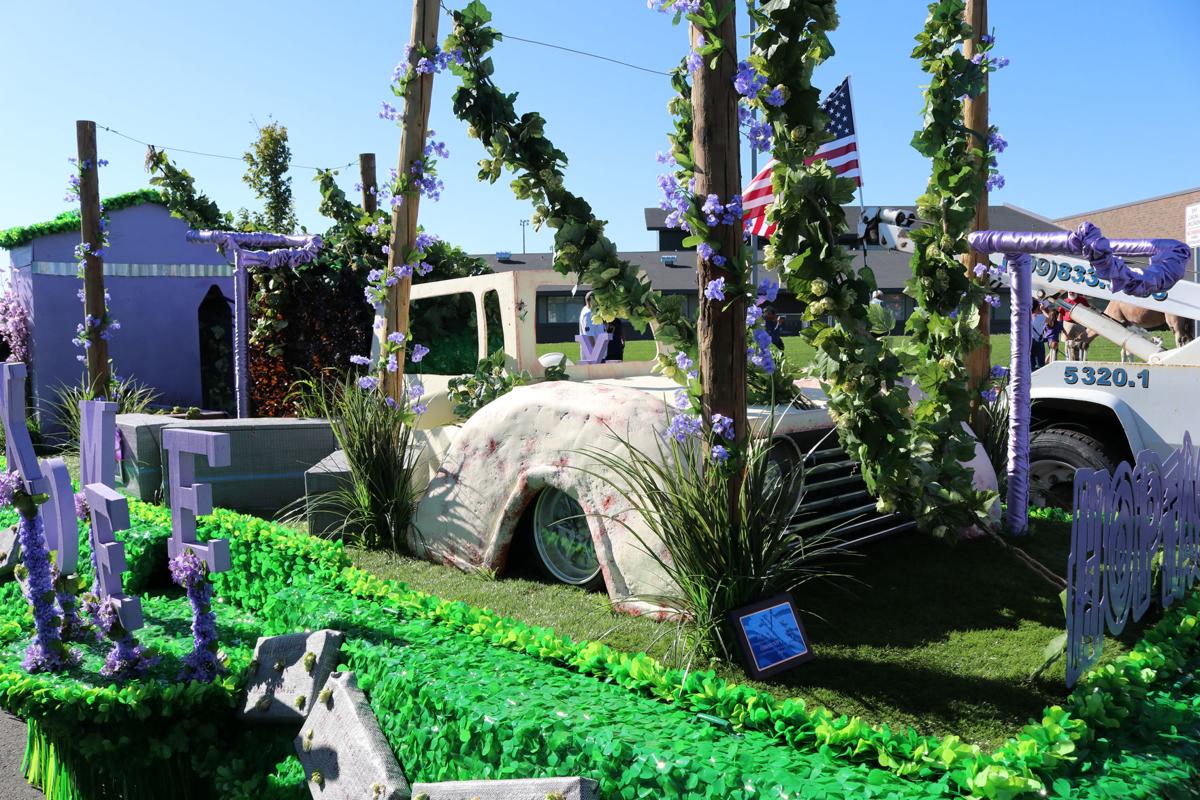 A side shot of the finished float in all its glory. It couldn’t be built without the help of dozens of volunteers. 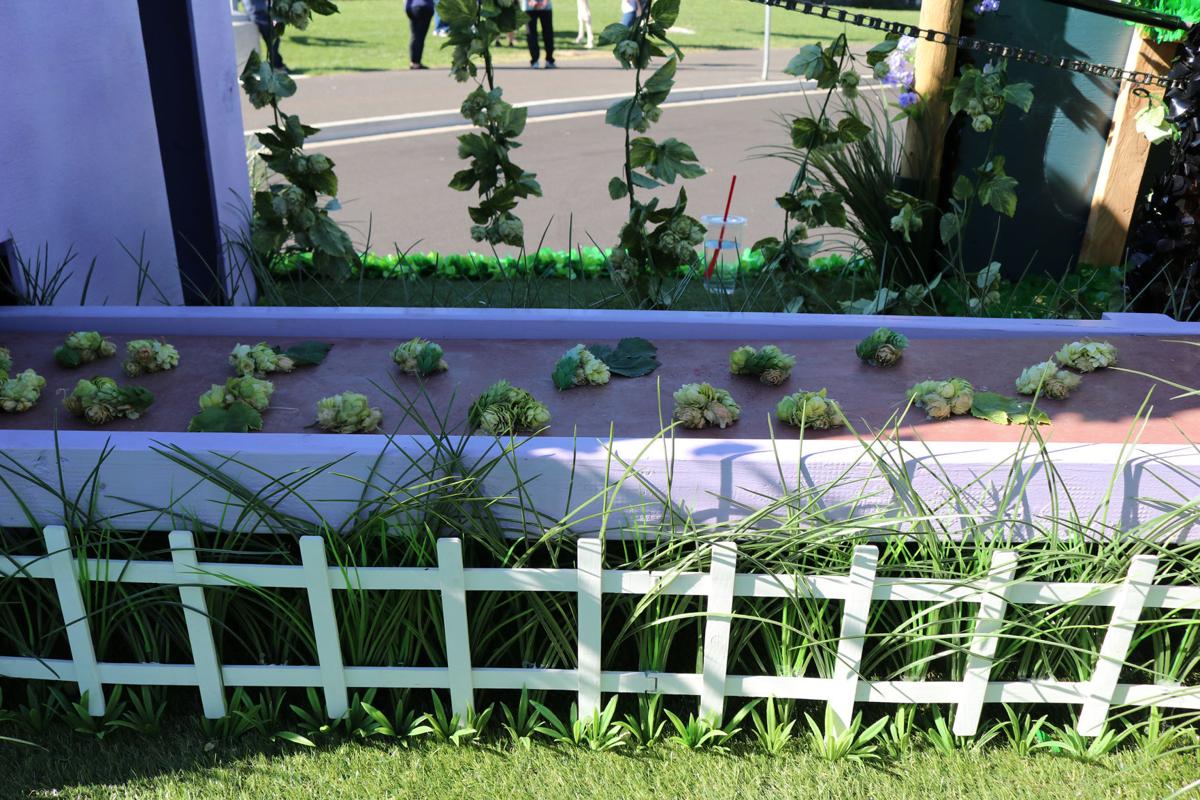 The float represents Moxee down to the real hops on the conveyor belt.

Leira’s mom Didi Schibig on the left, with Sophie’s mom Mardell Newhouse, working on the float late into a summer night.

Sophie and Leira wave to the crowd at the Wapato parade this summer.

A side shot of the finished float in all its glory. It couldn’t be built without the help of dozens of volunteers.

The float represents Moxee down to the real hops on the conveyor belt.

The Miss East Valley royalty float glides down the street carrying young women in tiaras moving to the sounds of Kelly Pickler’s Small Town Girl. The scene is regal, beautiful, and educational for parade viewers.

What that view doesn’t show is the sweat and staples and tape and chicken wire that go into making a float, getting it to and from events, and keeping the whole thing operational. Floats are popular entries in the region’s many parades. The East Valley float carries queen Sophie Kroes and princess Leira Freeburg-Perez. They were crowned at the 2019 Miss East Valley Scholarship Pageant at the Capitol Theatre in July. A panel chooses a queen based on a talent presentation, community service platform, a private interview with judges, a tiered point system of raffle ticket sales, and an evening gown ceremony featuring onstage questions. The raffle tickets help fund a scholarship, the court’s attire, and travel. The parade display is largely funded by float sponsors who then have their name featured on the float.

Kroes is a 17-year-old senior at East Valley High School. She is a drum major and plays tuba in the band, plays soccer and runs track, belongs to National Honor Society and is class president. For her pageant performance, she played the piano. Kroes said that the time commitment involved in the royalty court can be challenging because of her other activities but that seeing little faces light up at the sight of her tiara makes the effort worth it.

“Little girls ask to have a photo taken with me and that makes me happy,” she said. Freeburg-Perez agreed that serving on the royalty court includes a big time commitment.

“I didn’t realize how much time it took until I was in it,” she explained. “But it is so much fun. I have made good friends with girls from other courts.” Freeburg-Perez said that besides parades every weekend, the court attends and helps at community events.

“It is such a good way to get involved with our community and learn to do public speaking,” she said. For her pageant talent presentation Freeburg-Perez choreographed and performed a Puerto Rican dance. The 15-year-old EVHS freshman plays softball, is A.S.B. vice president, volunteers with the Awana group at her church and serves on the drama team for Vacation Bible School. She believes she has benefited most from this experience through her friendship with Kroes as well as with royalty from previous years. And that more young people should take part, both for the benefits and for the fun of making great friendships with students from across the region.

According to co-coordinator Lisa Sharples, many local royalty groups work together.

“The groups from Selah to Prosser go to ‘Tiaras on the Town’ on the Sunday of Labor Day weekend,” Sharples said. “While coordinators meet, the girls have a scavenger hunt around town. Then we host a royalty bingo event at St. Joe’s every year. It is a great way to share ideas because we are all learning as we go,” she added.

Another advantage of the cooperative effort by these competitors is that they are able to share supplies if they get in a bind. Most supplies needed to put together a parade float are purchased online with the closest available vendor being Display & Costume in Seattle. Ronnie Butler, executive assistant to the Yakima Herald publisher and East Valley royalty co-coordinator, explained that it is common for volunteers to put in 40-60 hours a week building a new float. Butler became involved with the East Valley group when a friend’s daughter was on the royalty court. She counts her years of service by color.

“Lavender court is my eighth court,” she said. Every court has its own color theme that is used in their dresses as well as the floats. This year’s lavender court has a float that showcases the hop harvest. The scene includes a hop yard complete with vines, a harvest truck, conveyor belt and hop kiln with bales. That kind of detail requires lots of effort by the community. For the past six years, float dismantling and rebuilding has taken place at the home of Holly and Brad Sharp. In late summer, just as the smell of the hop harvest fills the air in the East Valley region of the Yakima Valley, their shop area buzzes with the sound of saws, drills, staple guns, and teen girls practicing a dance routine. The Sharps have been involved since their daughter, Brielle, was on the court. Holly now serves as co-coordinator and designs the float elements once a theme is selected. Then she and Brad work on the motorized parts. Their place is a beehive of activity during the few weeks between the last event at the Moxee Hop Festival in August and the new season’s first parade on Labor Day weekend.

Thanks to many hours of work from dedicated parents, community volunteers, and royalty court, the lavender float was ready to roll in the Wapato Harvest Festival parade where it earned a Best of Event award. Other parades include Harrah, Sunnyside, Leavenworth, and Yakima. The court also participates in three parades with their winter holiday-themed float, constructed in October and featuring fresh routines choreographed by last year’s queen Emma Gruenberg. Again, the East Valley community pitched in while parents and a core of volunteers broke out the plywood and saws, foam and batting, glue guns and Velcro. Moms stapled petal paper or stenciled blocks while helping the court plan their routines as well as when and where the float will appear.

“Most places have a Chamber of Commerce, etcetera, to help fund their floats but we work with a very minimal budget,” Holly pointed out. “We use the raffle to fund ours and sometimes are able to do a car wash or yard sale. That’s why our community sponsors are so important to us,” she explained. The group also uses pageant sponsors in order to put on the annual pageant.

“We have such an awesome community,” Holly said. “When you put out a call for help, they show up.”