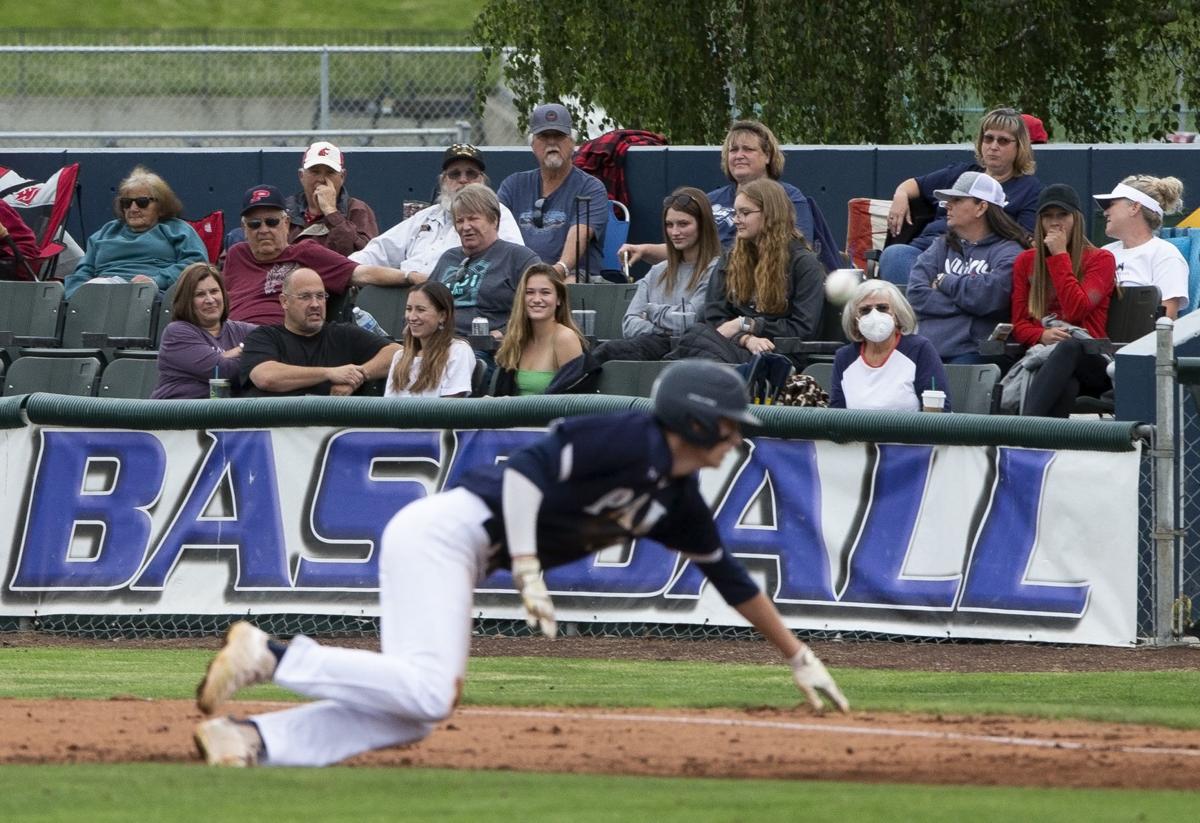 The crowd watches the first game of Friday night’s doubleheader between the Yakima Valley Pepsi Pak and the River City A’s at Carlon Park in Selah. 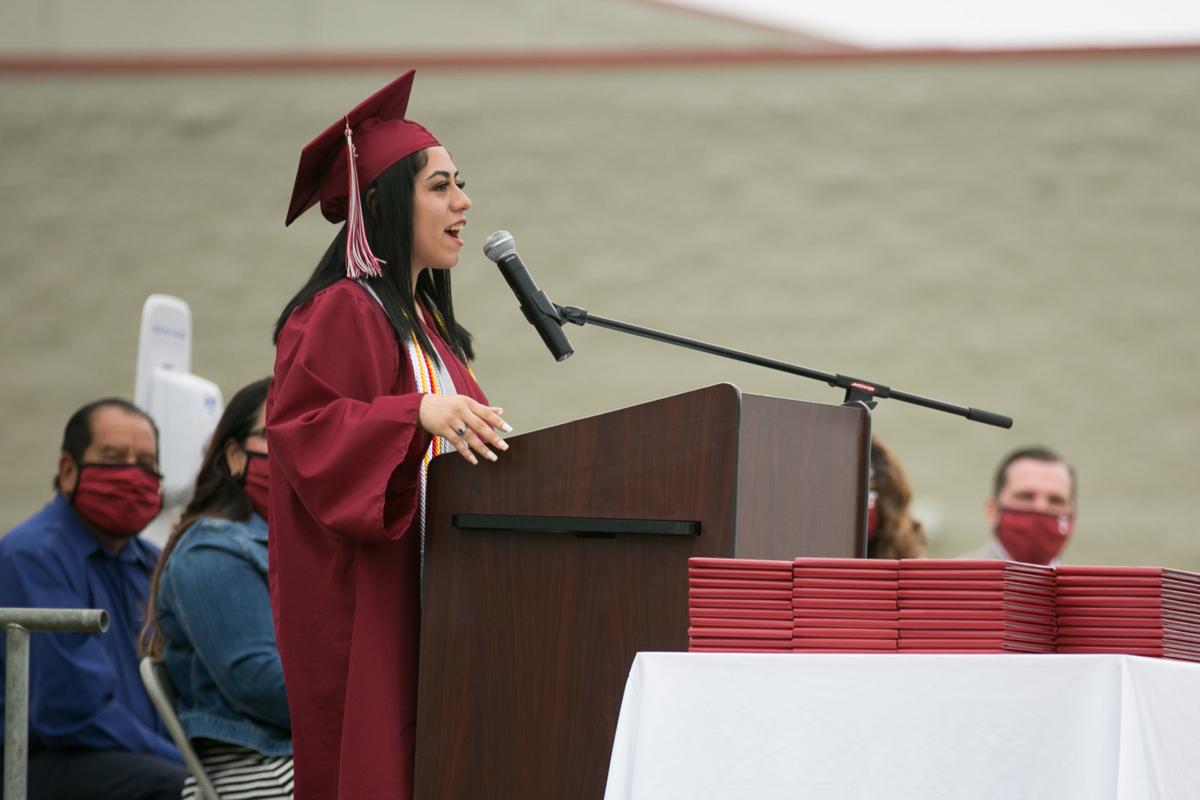 Stephanie Quinones-Sanchez gives her speech to her fellow classmates during a drive-by graduation ceremony at Toppenish High School Friday, June 5, 2020, in Toppenish, Wash. 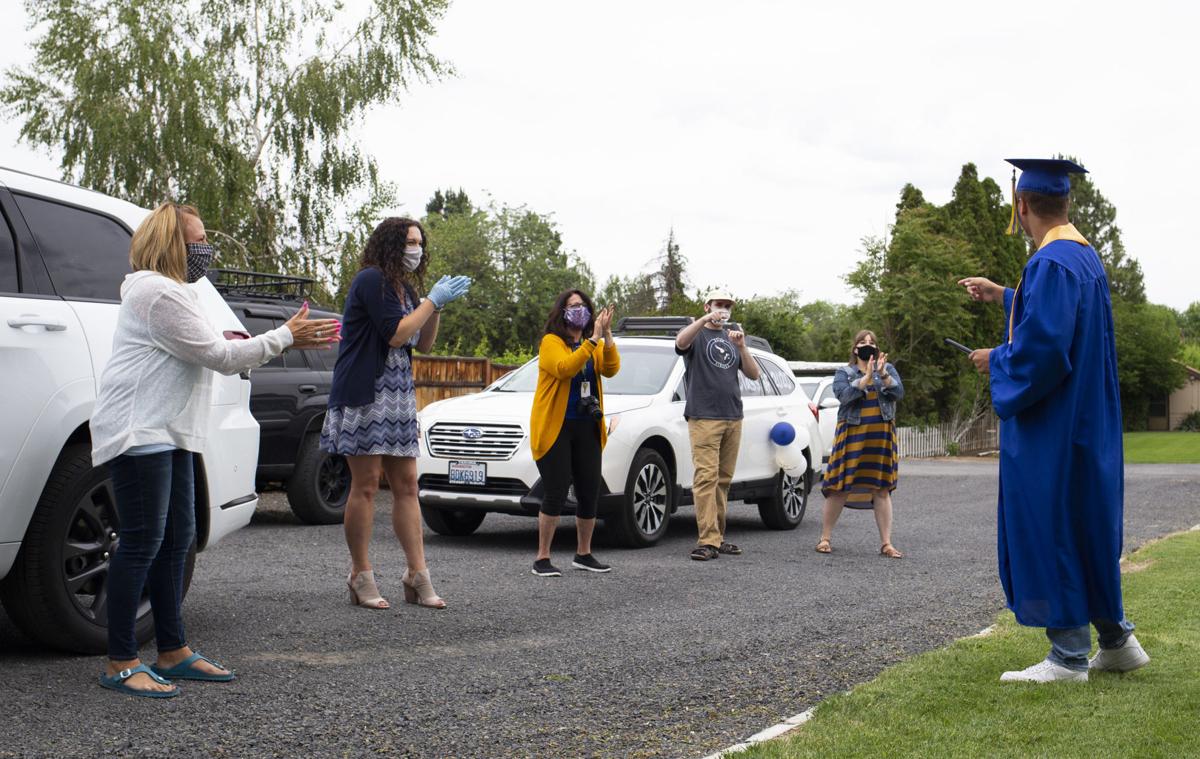 Selah High School senior Wyatt Berriman, right, is applauded by staff members after receiving his diploma in front of his home on Friday, June 5, 2020 in Selah, Wash. Staff members from Selah High School split into groups to deliver diplomas and gift bags to graduating seniors in their front yards and driveways.

The crowd watches the first game of Friday night’s doubleheader between the Yakima Valley Pepsi Pak and the River City A’s at Carlon Park in Selah.

Stephanie Quinones-Sanchez gives her speech to her fellow classmates during a drive-by graduation ceremony at Toppenish High School Friday, June 5, 2020, in Toppenish, Wash.

Selah High School senior Wyatt Berriman, right, is applauded by staff members after receiving his diploma in front of his home on Friday, June 5, 2020 in Selah, Wash. Staff members from Selah High School split into groups to deliver diplomas and gift bags to graduating seniors in their front yards and driveways.

The past few days have offered a few wildly diverse examples of what’s being done the right way and the wrong way as Yakima Valley inhabitants struggle their way through the COVID-19 pandemic. These examples involve the common threads of older adolescents, their rites of passage, and the adults who bear responsibility for their well-being.

First, we offer a shout-out to the Class of 2020 graduates of Selah High School and to the administrators, teachers, parents and other community members who found a creative way to celebrate this major milestone while largely adhering to health and safety directives issued by the state and the Yakima Health District. The county remains solidly entrenched in Phase 1 of the state’s four-phase reopening plan due to high COVID-19 rates. Phase 1 offers no opportunity for a traditional commencement ceremony — which, in Selah’s case, would have included hundreds of students along with hundreds more well-wishers in addition to school personnel.

Like every other Valley school district, Selah officials anguished over the thought of disappointing the senior class by abandoning the traditional commencement ceremony. Determined to prioritize safety, however, administrators and faculty — about 75 in all — climbed into vehicles Friday and delivered diplomas to about 250 graduates. Each student was treated to a brief ceremony, either in front of their home or at the school. They received class T-shirts and gift certificates from local businesses in addition to their diplomas. Social distancing was practiced, contact was limited, and reduced risk of exposure was prioritized — ironically, all this taking place in a city in which Mayor Sherry Raymond issued a proclamation a month ago asserting that city employees would do nothing to stop residents from taking part in any activities that were OK prior to Gov. Jay Inslee’s March shutdown directive.

Other districts also found creative paths to celebrate their seniors while taking steps to limit the chance of exposure to the coronavirus — but sometimes not before giving serious consideration to more ill-advised ceremonies. West Valley, for instance, had a virtual ceremony Friday after calling off a drive-in event in which graduates would have walked across a stage.

Toppenish officials, on the other hand, ignored state and county health guidelines and held a drive-in ceremony for 257 graduates of Toppenish High School and Computer Academy Toppenish School. There were attempts at social distancing as seniors and their families stayed in their vehicles until their turn to walk across the stage (wearing face masks) to receive their diplomas. The ceremony did, however, include speeches from the platform, and the overall large gathering ultimately put hundreds of people at risk.

“For some of our students, they are the first ones to graduate in their families,” said Cindy Nichols, principal of Toppenish High School. “It means a lot to their families” to see the ceremony.

We understand, and we sympathize with our seniors and their families — but only to a point. No matter how well-intentioned, such decisions from adults who are responsible for the safety and health of young people still are putting untold numbers at risk of infection from the highly contagious virus.

Switching gears from high school graduation to another late-spring activity — baseball — we return to Selah, where the Yakima Valley Pepsi Pak is playing an independent schedule instead of its normal affiliation with American Legion, which has canceled its regional and national tournaments. The Pak plays its home games at Carlon Park and appears to have enthusiastically embraced the spirit of the mayor’s attitude toward state health and safety guidelines, as have its fans. Taking some safety precautions but not nearly enough, the Pak opened its season with a 13-game, eight-day homestand recently in defiance of state and county restrictions.

We appreciate the team’s social-distancing attempts as far as they go, including extended dugouts to keep players apart, restricted access to the clubhouse, no shared water jugs or seeds, and limited celebratory contact. At the same time, we are alarmed at some of the comments from coach Mike Archer and his players regarding their decision to play on despite the pandemic that continues to ravage Yakima County — comments that show complete disregard for the opinions and advice offered by health and medical experts across the country.

“Our kids, our parents and our city are excited about this,” Archer told a Herald-Republic reporter Friday. “We know the county is against this, but we feel it’s safe out here and our players are safe. For baseball on this field, it was time to move ahead.”

From pitcher Dylan Bishop, a student at Whitworth University: “We feel safe out here. We’re all practicing social distancing, we’re doing all we can and we’re wary of what’s going on.”

From shortstop Jack Van De Brake of West Valley High School: “What’s important is we made that decision for ourselves. We feel good out here, safe. This is where we should be.”

They think it’s safe. We can only hope they’re right. In baseball, you want to be safe rather than out. But baseball has always been a game of numbers and statistics, and it’s important to note that older teens are not immune from the coronavirus: the 0-to-19 age group made up 10% of Yakima County’s nearly 5,000 COVID-19 cases as of Tuesday night.

Meanwhile, a photo in the Saturday Sports section showed fans who abstained from social distancing and eschewed the most fundamental of universally agreed-upon safety measures: Of the 18 spectators whose faces were shown in the photograph, one wore a mask. Again, we can only hope that crowd safety measures — no food concessions and a request to be aware of others’ space — can make at least some difference. So far, though, it’s clear that these games are putting people at risk.

With these and similar actions — and attitudes — Phase 2 will continue to be lost in the fog of the future. Typically, such large, organized gatherings of young people morph into collections of smaller post-event gatherings. Who knows how many dozens of teens are gathering for parties in various basements and family rooms across the Valley following commencement?

It’s the normal thing to do. But we all know that there’s nothing normal right now. Yakima County needs all hands on deck in its war against COVID-19.

Kevin Chase, superintendent of Educational Service District 105, has sympathy for school districts and other responsible parties that are attempting to make good decisions while feeling pressure from parents and young people. But guidelines are necessary, he said recently.

“It’s like you’re being told by the principal, ‘Don’t run in the hall, it’s dangerous for you,’” he said. “No one likes to be told what to do by someone in authority. But in this case, we are not going to just be able to ignore it and it’ll go away and we’ll reopen and everything will be fine. … We’ve got to buckle down. There’s no shortcuts to Phase 2.”

Members of the Yakima Herald-Republic editorial board are Bob Crider and Bruce Drysdale.