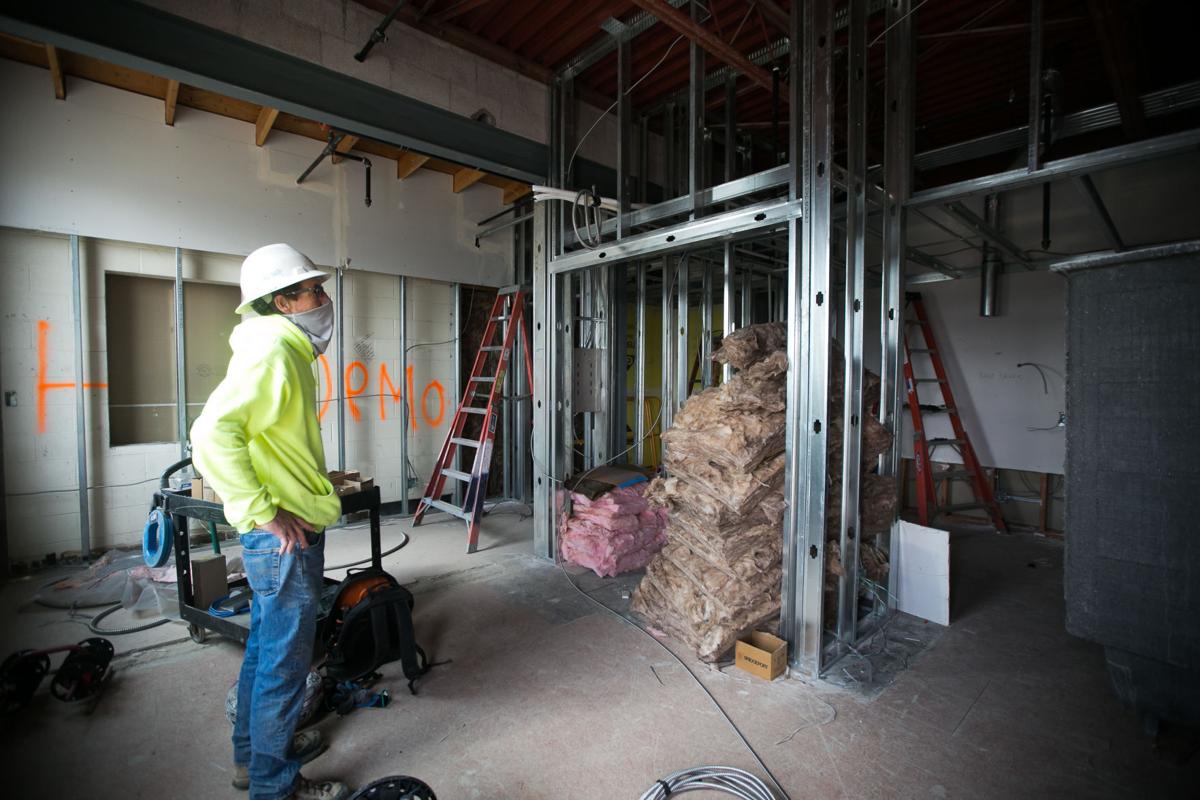 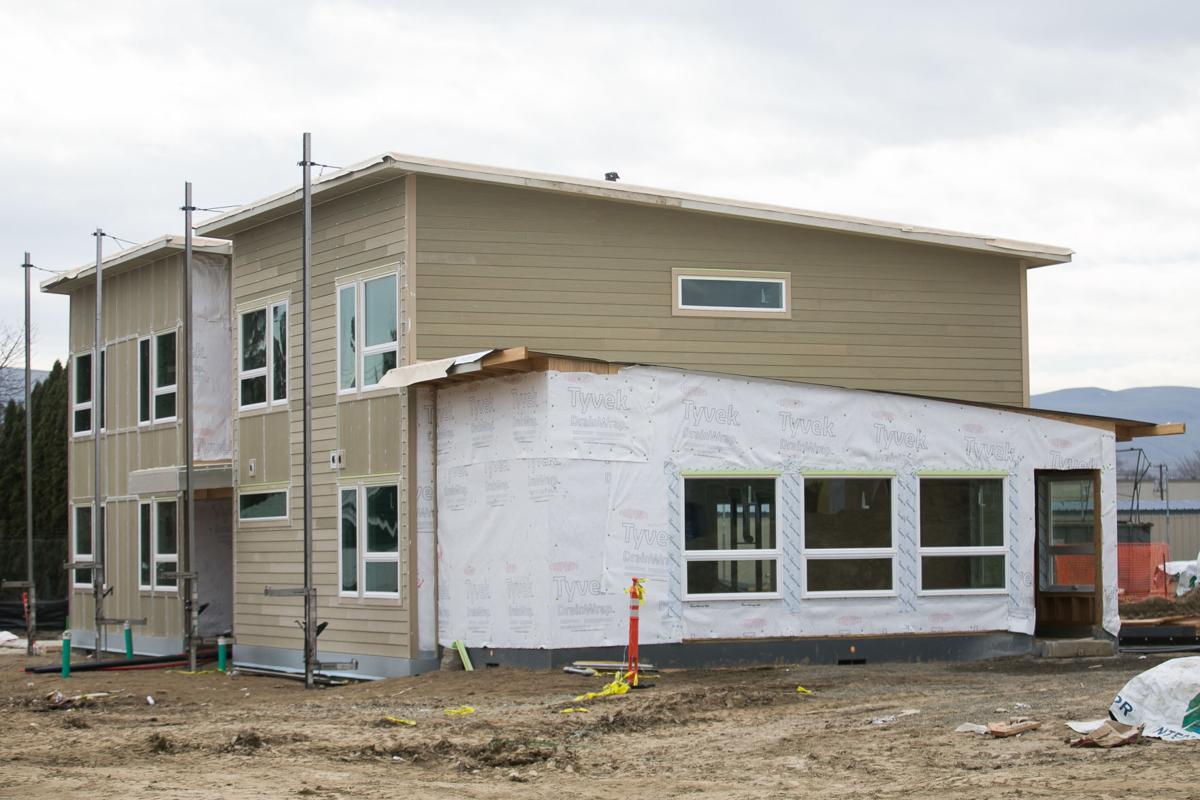 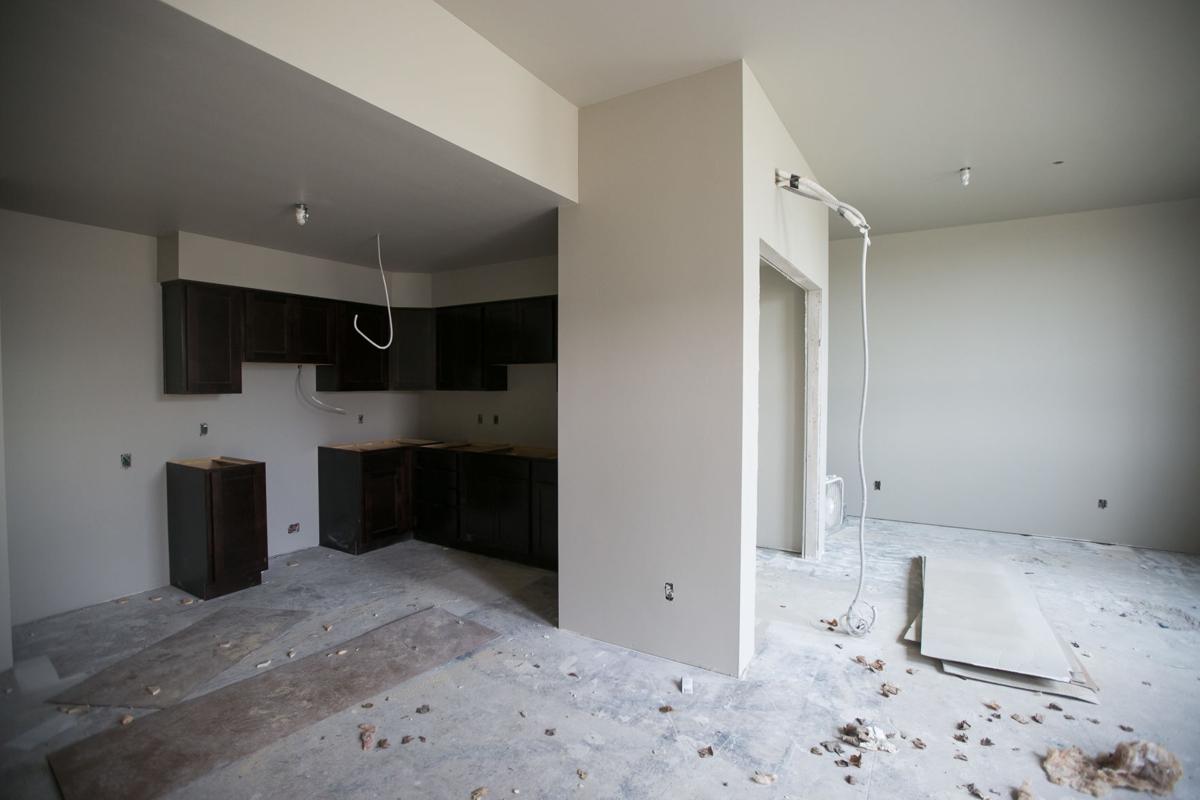 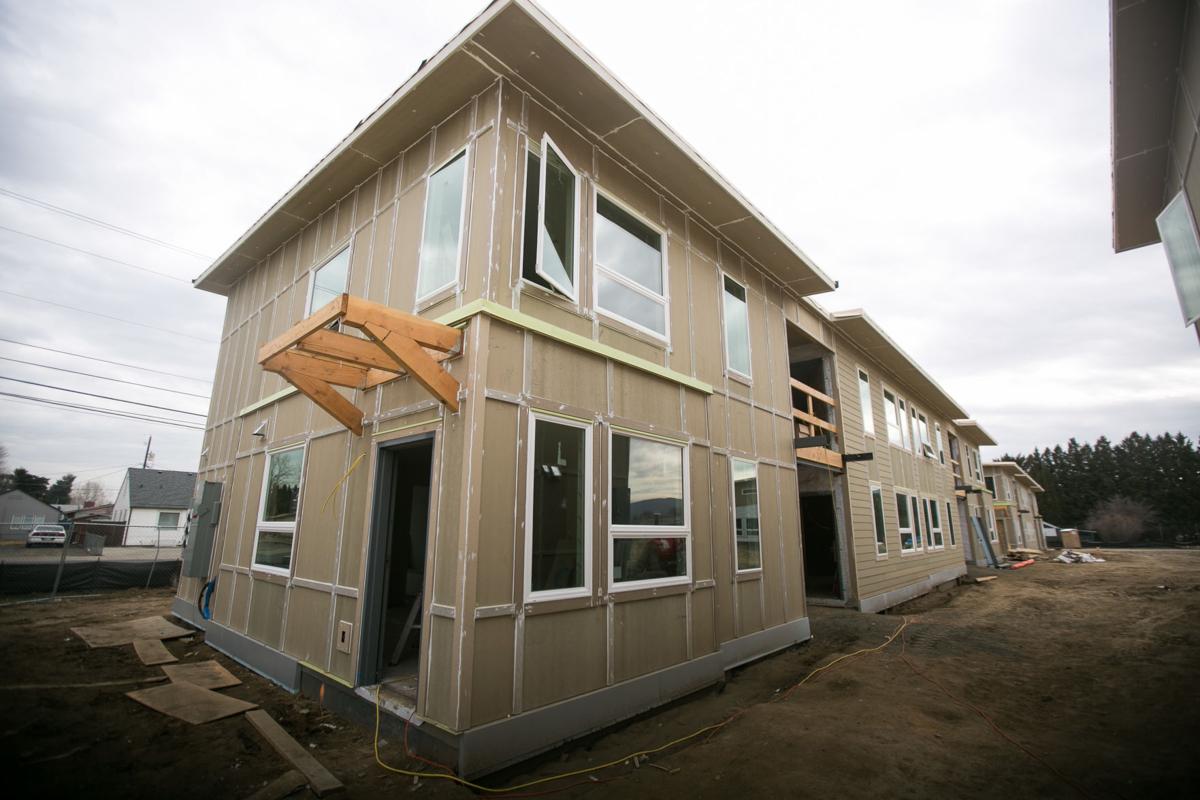 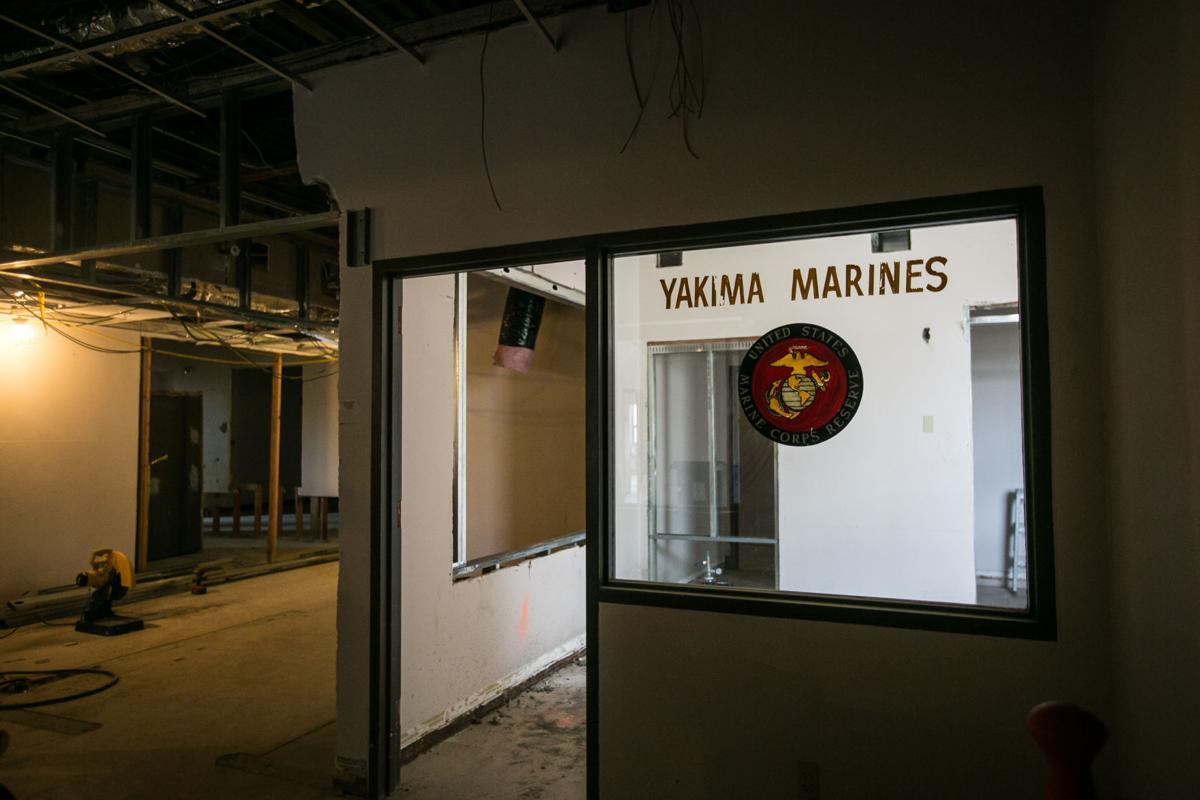 A hand-painted window mural which bears the inscription “Yakima Marines” is seen in the armory at Yakima Housing Authority’s Chuck Austin Place on Tahoma Avenue in Yakima, Wash., on Friday, March 5, 2021. 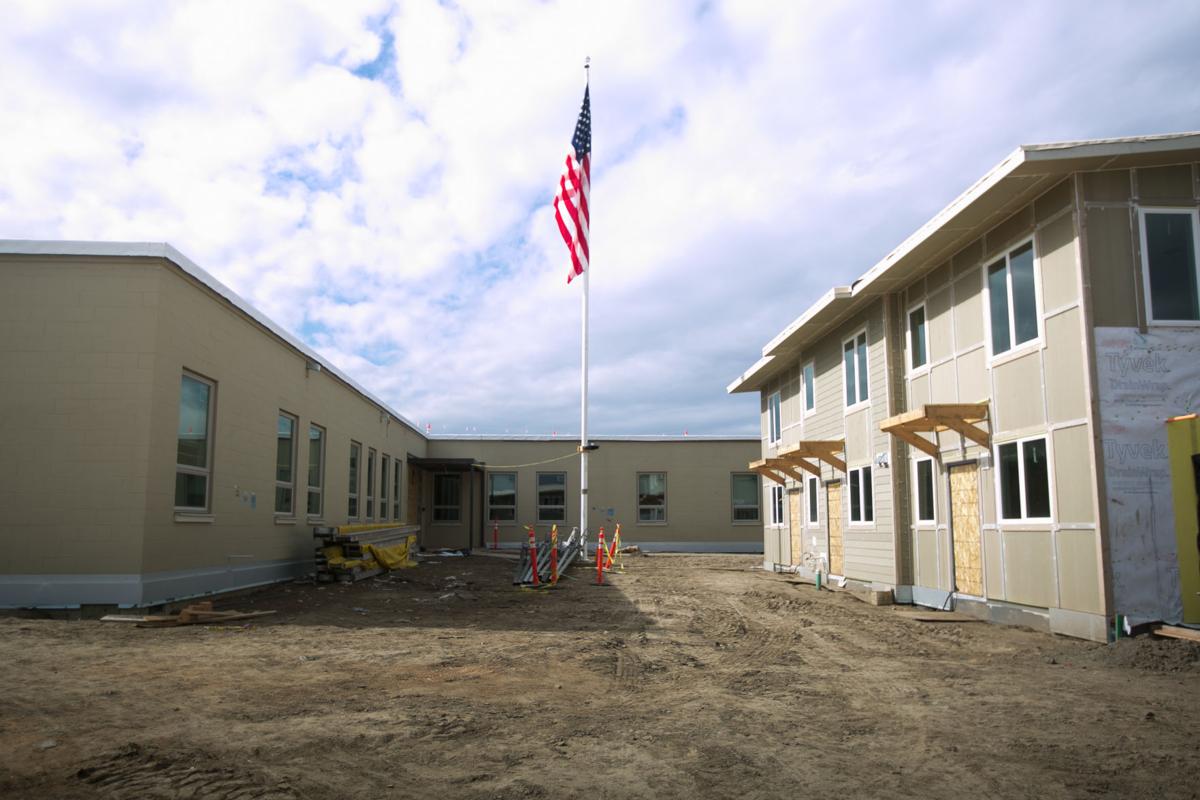 An American flag is photographed in front of the armory at Yakima Housing Authority’s Chuck Austin Place on Tahoma Avenue in Yakima, Wash., on Friday, March 5, 2021.

A hand-painted window mural which bears the inscription “Yakima Marines” is seen in the armory at Yakima Housing Authority’s Chuck Austin Place on Tahoma Avenue in Yakima, Wash., on Friday, March 5, 2021.

An American flag is photographed in front of the armory at Yakima Housing Authority’s Chuck Austin Place on Tahoma Avenue in Yakima, Wash., on Friday, March 5, 2021.

Construction of the Chuck Austin Place — a veterans housing project and service hub in Yakima — is on track for summer completion.

Apartments have been built and work continues to transform an old armory into additional housing and a center where medical, dental, behavioral health and other services will be provided. In all, 41 units will be built.

There were 48 homeless veterans counted in Yakima County in 2020, according to the annual Point-In-Time survey. One-third were unsheltered, while half were considered chronically homeless and 45% were younger than 65, the count said.

Headed by the Yakima Housing Authority, the project is unfolding at the old Marine Corps Reserve armory at 1703 Tahoma Avenue. It’s expected to be complete in July with move-ins that same month, said Lowel Krueger, executive director of the housing authority.

“Everything seems to be on time and on budget at this point,” he said. “We’re clicking along pretty good.”

A two-story apartment complex featuring 24 units has already been erected along South 16th Avenue on the east end of the property. There will be one- and two-bedroom units for single veterans, couples and families, Krueger said.

There will be open space at the center of the site and eventually playground equipment for youths, he said.

“The open space in the middle of the units is designed to keep kids away from 16th Avenue,” he said.

The old armory will be outfitted with 16 studio apartments for single veterans as well as space for services, he said.

Yakima Neighborhood Health Services will be using about 2,500 square feet of the building to provide medical, dental and behavioral health services.

There will be two examination rooms, a care coordination area, a dental clinic and a behavioral health professional, said Rhonda Hauff, CEO of Neighborhood Health.

“We are excited to be able to provide comprehensive health care for the veterans who will live there as well as other veterans and their families,” she said.

Services at the hub will be available to all area veterans and their families, not just those living on site, Hauff said.

“It’s really going to be a hub for veterans,” she said.

A coordinator will help link veterans to other services they may need, Hauff added.

“It makes the services more convenient — having someone there and our staff there will help with outreach,” she said.

Krueger said fundraisers will be planned to help pay for playground equipment, refurbishing the armory’s gym, a veterans memorial and murals that will be painted on building walls.

For information on donating to the project, email Susan Wilson at susan.wilson@yakimahousing.org.

There will be more office space at the site for other agencies providing veteran services, and other providers are welcome, Krueger said.

A local artist is being sought to paint a mural on an exterior and interior wall, he said.

The project is meant to serve veterans at a central place, Krueger said.

“Our concept is to have one place to go for veterans so they are not wandering around place to place to get services,” he said. “That’s really the concept of this facility.”