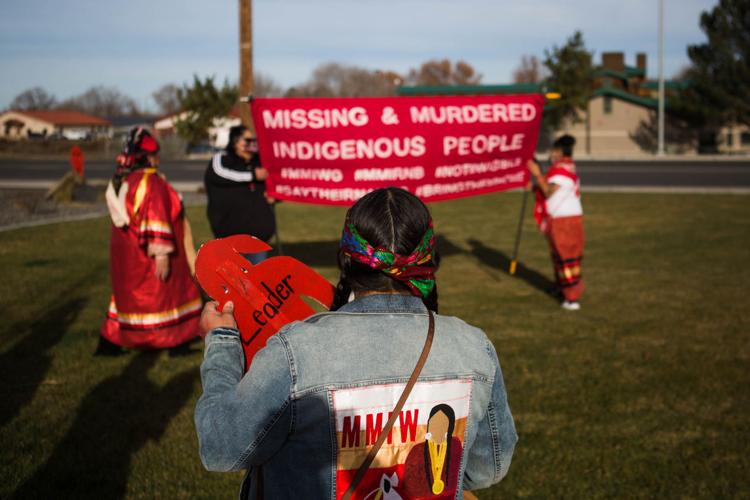 People gather outside the Yakama Legends Casino Events Center in Toppenish, Wash. before the first meeting for the state's new task force for missing and murdered Indigenous people Thursday, Dec. 2, 2021. 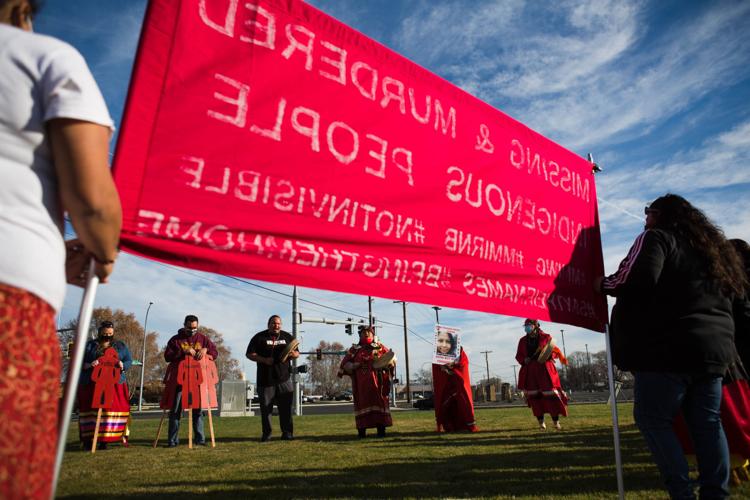 People gather outside the Yakama Legends Casino Events Center in Toppenish, Wash. before the first meeting of the state's new task force for missing and murdered Indigenous people on Thursday, Dec. 2, 2021.

People gather outside the Yakama Legends Casino Events Center in Toppenish, Wash. before the first meeting for the state's new task force for missing and murdered Indigenous people Thursday, Dec. 2, 2021.

People gather outside the Yakama Legends Casino Events Center in Toppenish, Wash. before the first meeting of the state's new task force for missing and murdered Indigenous people on Thursday, Dec. 2, 2021.

A task force recommends that the Washington attorney general’s office establish a cold case investigation unit to focus on cases of missing and murdered Indigenous people to help address a crisis that’s continued for generations.

The Missing and Murdered Indigenous Women and People Task Force also recommends that all law enforcement agencies be required to use the National Missing and Unidentified Persons System, commonly known as NamUs. It’s a publicly accessible resource and database for missing, unidentified and unclaimed person cases across the United States.

The 25-member task force released its first report Monday with a list of 10 recommendations to address a centuries-long crisis of missing and murdered Indigenous people. The preliminary recommendations agreed upon by task force members are intended “to continue progress toward the systemic change that we need,” Washington Attorney General Bob Ferguson said.

Heath was a strong, self-sufficient woman who excelled at sports and was known to stay in the mountains for weeks at a time to fish, hunt and gather traditional foods.

Heath’s disappearance has been described by the FBI as a suspected homicide. She is among dozens of women and men who have gone missing, have been murdered and have died mysteriously over decades within and beyond the 1.3-million acre Yakama Reservation.

“As a great-grandmother, I take this work very seriously. I also have grandchildren and great-grandchildren. I don’t want these children to go through what we’ve gone through,” Whitefoot said. “The work is important. I know that my sister Daisy would ask for nothing more.”

The task force began meeting in December 2021, with its first in-person meeting at Legends Casino in Toppenish. Building on the foundational work of tribes, activists, grassroots advocates, families, and survivors, it has met to understand the scope of violence against Indigenous people and to identify how it can be addressed through systemic and institutional changes.

Members have held six full meetings in the last seven months. There are five subcommittees that met separately, covering everything from families to data and research, criminal justice to community services. Beginning in March, task force members hosted monthly family talking circles to provide a place for survivors, family members and impacted community members to gather to share their experiences and find support.

The task force will produce its next report to the governor and Legislature on June 1, 2023. Its work was set for two years, but among the 10 recommendations is one that the task force timeline be extended through June 30, 2025.

Executive committee member Abigail Echo-Hawk, an enrolled member of the Pawnee Nation of Oklahoma, said that recommendation is crucial. “We need to make sure the Legislature extends the task force to do the work that undoes the 500 years of colonialism,” she said. “The stories have to end.”

The report includes a letter from members of the task force executive committee about that legacy of violence, which has disproportionately impacted Indigenous people.

“Since settlers arrived in the Pacific Northwest, violence against Indigenous people has been a constant and pervasive threat to safety, sovereignty and traditional ways of life,” it says. “In 1855, the rape and murder of a Yakama woman, her teenage daughter and young baby became the first official recorded instance of an MMIW case.

“We have been fighting for justice ever since.”

Among the issues task force members will continue to work toward is racial misclassification, which results in lack of knowledge of the true scope of the crisis. As the chief research officer at Seattle Indian Health Board and the director of the Urban Indian Health Institute, Echo-Hawk knows of that challenge too well.

In 2019 her organization issued a report, “We Demand More,” that focused closely on the issue of racial misclassification. It came after a report by Washington State Patrol in 2018.

“We were not willing to take tokenized efforts,” Echo-Hawk said of the State Patrol report.

The report released Monday includes multiple recommendations that came from the community with a focus on supporting families and ensuring that law enforcement agencies better coordinate to solve cases and communicate with families.

“Our loved ones will not die in silence,” she said. “We must push for the justice they deserve, for our families, by our families.”

“Today this task force puts forward recommendations that say justice isn’t for tomorrow, justice is for now — and we will fight for it.”

2. The task force data and research team will pay special attention to the link between gender and violence.

3. All law enforcement agencies should expand their collaboration and coordination with federal, state, county, local, and tribal social and health services. The task force shall develop best practices for law enforcement agencies and for social and health services to improve this collaboration and coordination.

4. Community service and resource programs should utilize inclusive language that reflects the experiences of MMIWP families and survivors.

5. The Legislature should establish and fully fund a cold case investigation unit within the attorney general’s office with a focus on MMIWP cold cases.

6. All law enforcement agencies should identify and implement strategies and practices to improve communication and transparency with family members in MMIWP cases.

7. Require all law enforcement agencies to use the National Missing and Unidentified Persons System.

8. The attorney general’s office shall update and re-issue the Missing Person’s Resource.

9. Public agencies should consider adopting policies to waive or reduce fees for parks, permitting fees and other costs and reduce administrative burdens associated with hosting large events such as MMIWP marches, rallies, vigils and memorials.

10. The task force will continue to provide consultation to federally-recognized tribes in support of sovereignty and self-determination.

Murdered, missing and mysterious deaths of Indigenous girls and women on or near the Yakama Reservation, in urban areas and in other states:

Uptick in bird flu cases likely this fall in WA