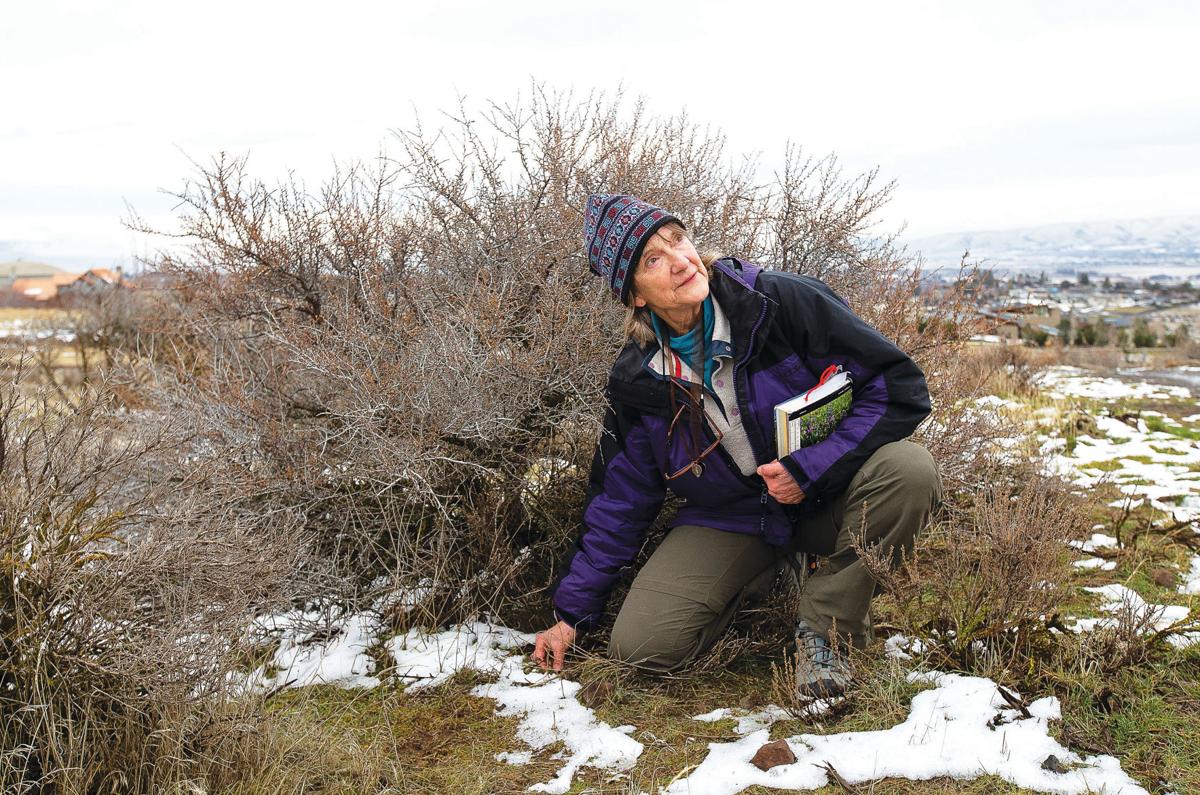 Terri Knoke crouches down to look at a type of Lomatium known as Canby's biscuitroot on Cowiche Canyon Conversancy's uplands trail near the trailhead on Friday, Jan. 11, 2019, in Yakima, Wash. Knoke has developed a special interest in the different species of Lomatium, 12 of which can be found in this area. (Evan Abell, Yakima Herald-Republic). 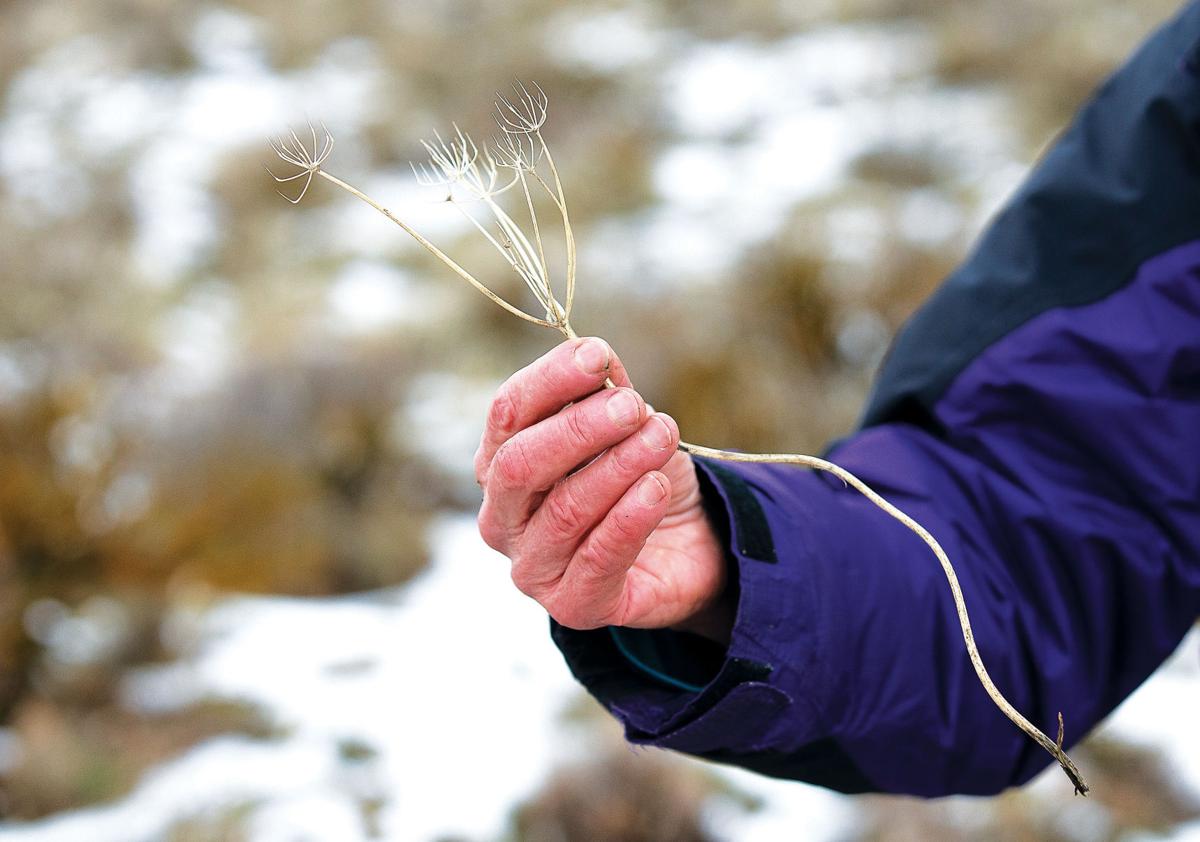 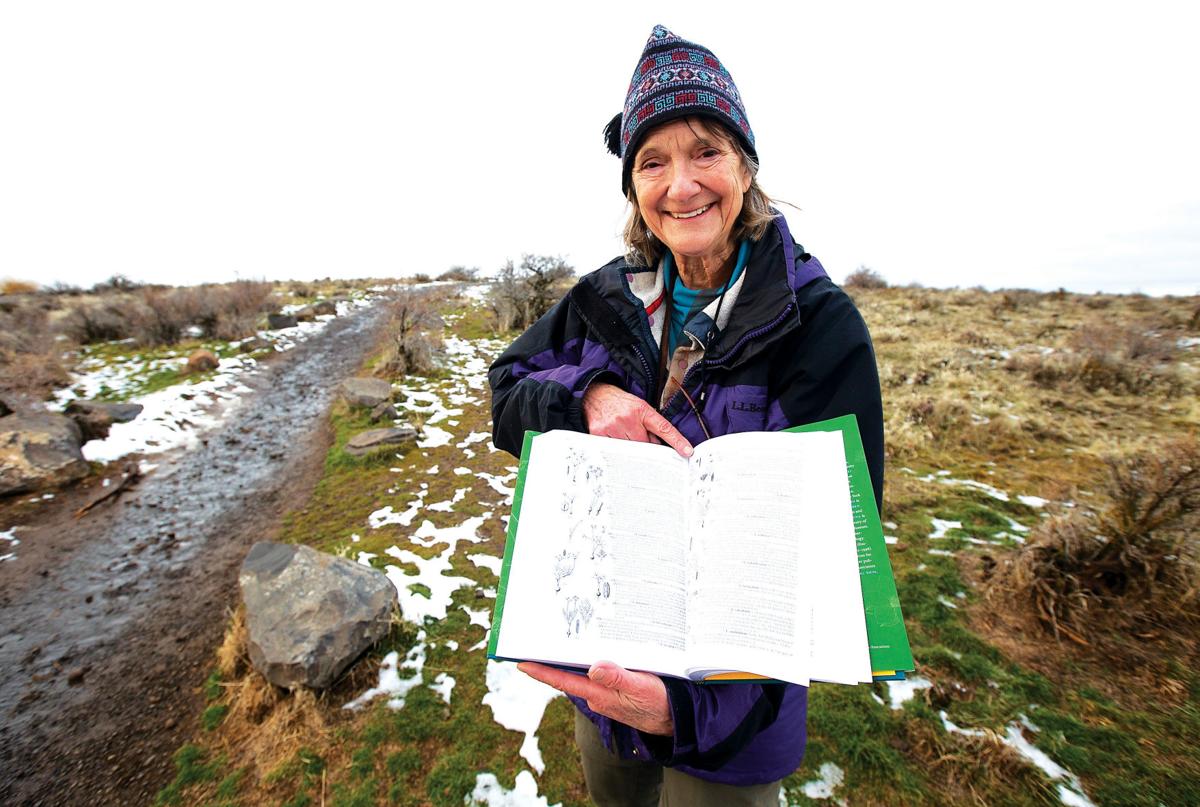 Terri Knoke holds a copy of "Flora of the Pacific Northwest" open to a page containing drawings of plants she contributed to the book. (Evan Abell, Yakima Herald-Republic).

Terri Knoke crouches down to look at a type of Lomatium known as Canby's biscuitroot on Cowiche Canyon Conversancy's uplands trail near the trailhead on Friday, Jan. 11, 2019, in Yakima, Wash. Knoke has developed a special interest in the different species of Lomatium, 12 of which can be found in this area. (Evan Abell, Yakima Herald-Republic).

Terri Knoke holds a copy of "Flora of the Pacific Northwest" open to a page containing drawings of plants she contributed to the book. (Evan Abell, Yakima Herald-Republic).

YAKIMA, Wash. -- It’s easy to find and identify flowers in the spring, when they’re in full bloom displaying their vibrant colors.

Trying to document different species in the middle of winter, when they’re little more than stems and roots, provides a significantly larger challenge. Terri Knoke embraces it with an irrepressible enthusiasm, refusing to let even large snow drifts stop her from pursuing her passion.

“We do what we call forensic botany, which is after the plants are dead we still botanized,” Knoke said. “We botanize year-round.”

Last Friday, that meant joining friend and fellow botanist Ernie Crediford at Cowiche Canyon Conservancy’s upland trails, one of their favorite spots to study wildflowers in the state. The area features 12 different species of Lomatium — also known as “biscuitroot” or “desert parsley” — including the rare Lomatium lithosolamans, which is found only in a handful of tiny populations in Yakima and Kittitas counties.

The plant’s deep roots make Lomatium largely invisible most of the year, but Knoke managed to find some plants as she crouched down looking for “carrot-like things,” since they’re part of the same family as the common vegetable. She quickly spotted a speck of pink identifying a flower as Canby’s biscuitroot, along with an umbrella-shaped umbel of another Lomatium that will eventually produce small yellow flowers in the spring.

Although she studies and tracks wildflowers of all kinds across the Pacific Northwest, Lomatiums hold special sentimental value for Knoke. She recounted some of that history and shared her knowledge of a plant revered by the Yakamas and other Native Americans at Yakima Valley College on Tuesday in a lecture titled “Falling for Lomatium: Love After Sixty.”

Her fascination began thanks to her uncle Don Knoke, a well-known and influential Ellensburg botanist who died in 2015 at the age of 95. He provided key leadership in Washington’s efforts to document plant life and discovered a rare species of Lomatium found only in two adjacent Kittitas counties meadows that would come to be known as Lomatium Knokei.

Terri Knoke didn’t know much about her uncle’s exploration in the plant world, since she worked mostly on the west side of Washington as a chemical engineer until retiring at the age of 57. But when given the chance to join him she discovered they shared the same curiosity, and in 2014 she completed the illustrations needed to document the Lomatium knokei.

“I left art in high school, like most of us did,” Knoke said. “It took me almost a year because I had to visit the meadow twice.”

She quickly became hooked and began collecting plants all over the state as a member of the Washington Native Plant Society, often sending them back to the University of Washington’s herbarium for identification and documentation. Crediford often joins Knoke for weekly trips, and he also takes care of a renowned native garden at his home in Richland.

The program recently began in Yakima and Kittitas Counties, providing a valuable interactive educational opportunity. Knoke and Crediford also occasionally lead wildflower hikes in central Washington, including one this April on the Cowiche Canyon Conservancy trails.

Both botanists are eager to share their knowledge and experience with others, especially since climate change continues to damage the ecosystems needed for many wildflowers to thrive. Just by looking at lichens, small organisms found on wildflowers, Knoke can tell most plants on the Conservancy’s trails are several years old and haven’t been able to reproduce, a widespread problem in the shrinking shrub steppe.

She still found several different perennials, including grass widows, the purple flowers that should be among the first to bloom in about three weeks. Crediford said if the winter remains mild with a good amount of precipitation, the trails should produce an impressive display during the peak time, from late March until the middle of May.

“If we can make it through the rest of the winter with no severe weather I’m looking to see plants that we don’t see,” Crediford said. “The only shrubs we see are old shrubs, no new starts, and I’m hoping this spring to see some new plants that have germinated and are going to make it through.”

Want to learn more about wildflowers? Here are some books Terri Knoke recommends:

Wildflowers of the Pacific Northwest by Mark Turner and Phyllis Gustafson

Field Guide to the Rare Plants of Washington by Pamela Camp and John G. Gamon