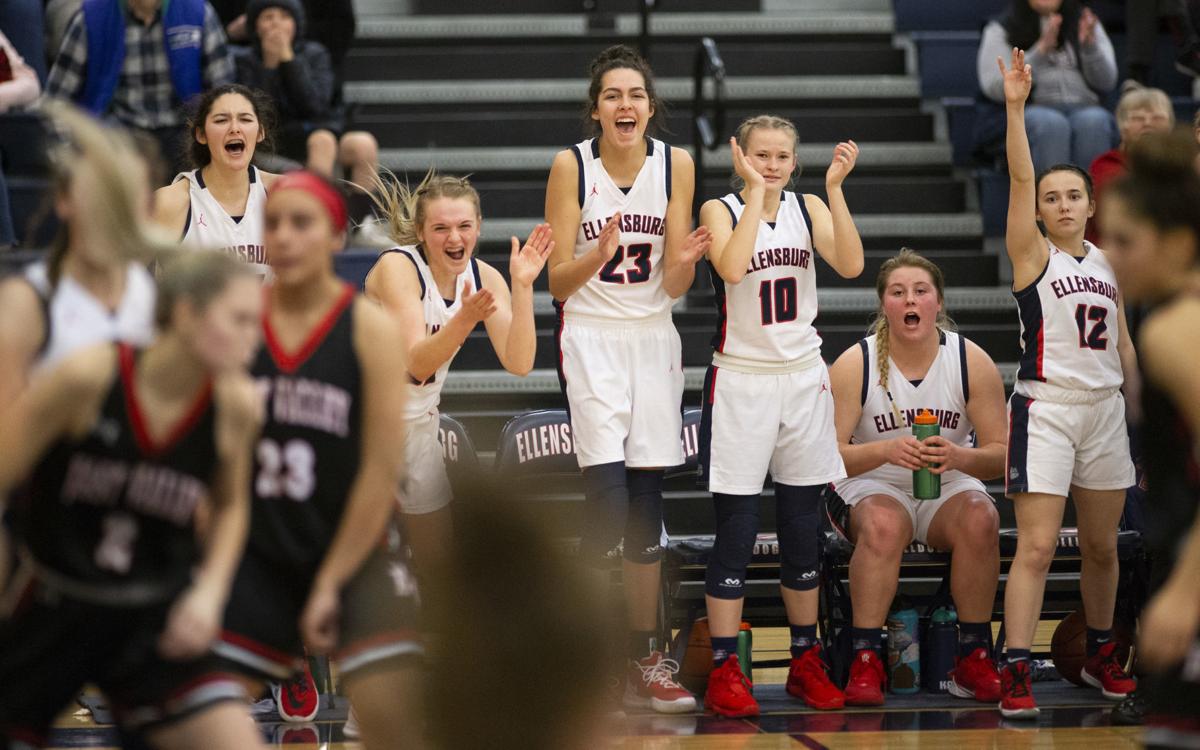 Ellensburg players celebrate a 3-pointer late in the fourth quarter during a 49-43 victory over East Valley on Saturday, Jan. 11, 2020 in Ellensburg, Wash. 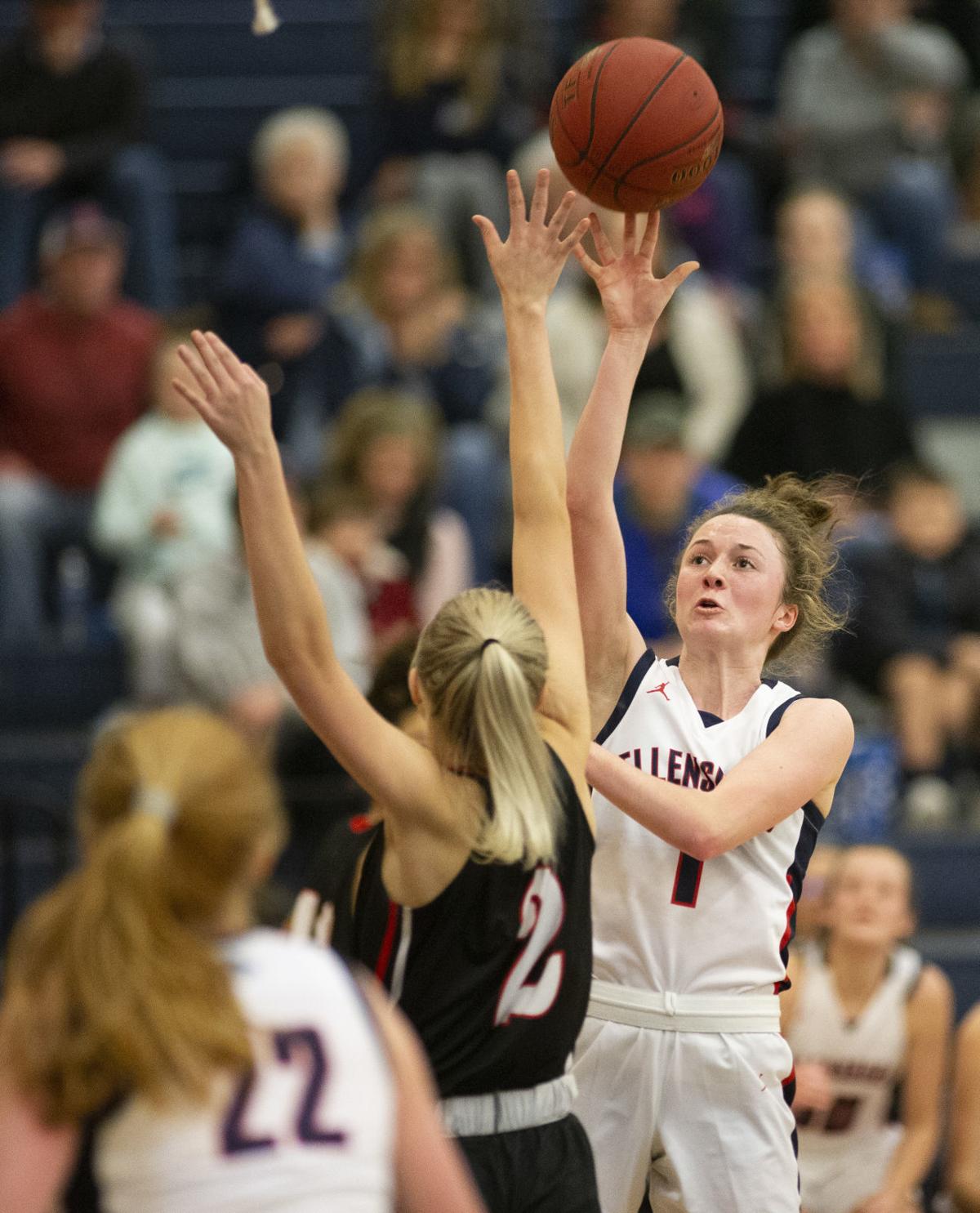 Ellensburg's Brinley Hagemeier is fouled while scoring by East Valley's Haiden Harrington with 1:31 left in the game on Saturday, Jan. 11, 2020 in Ellensburg, Wash. 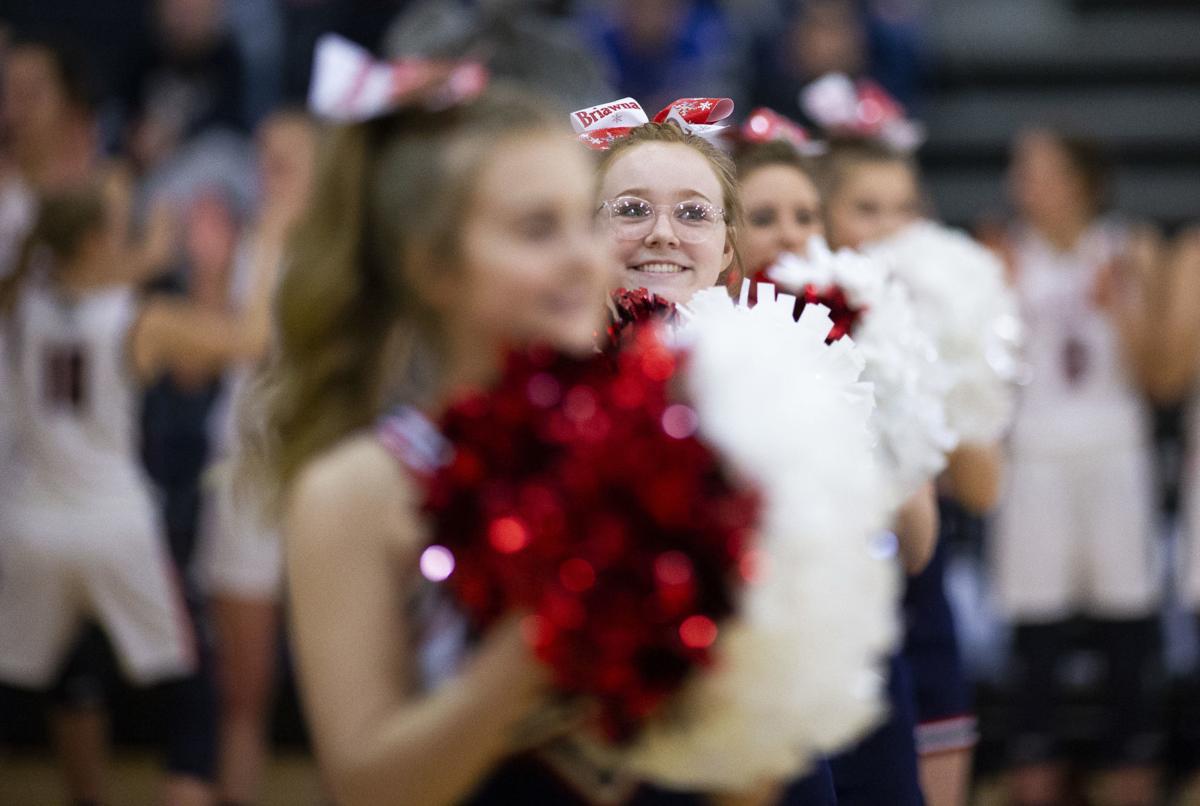 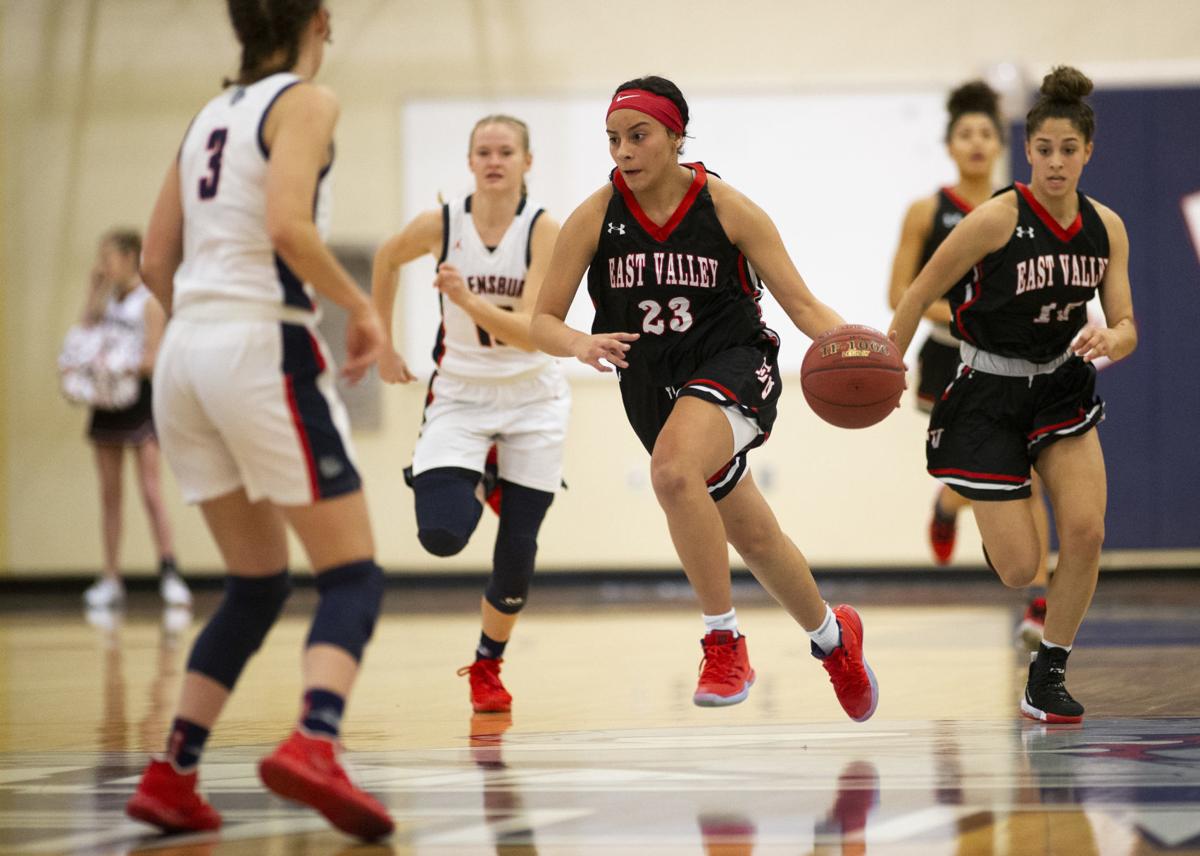 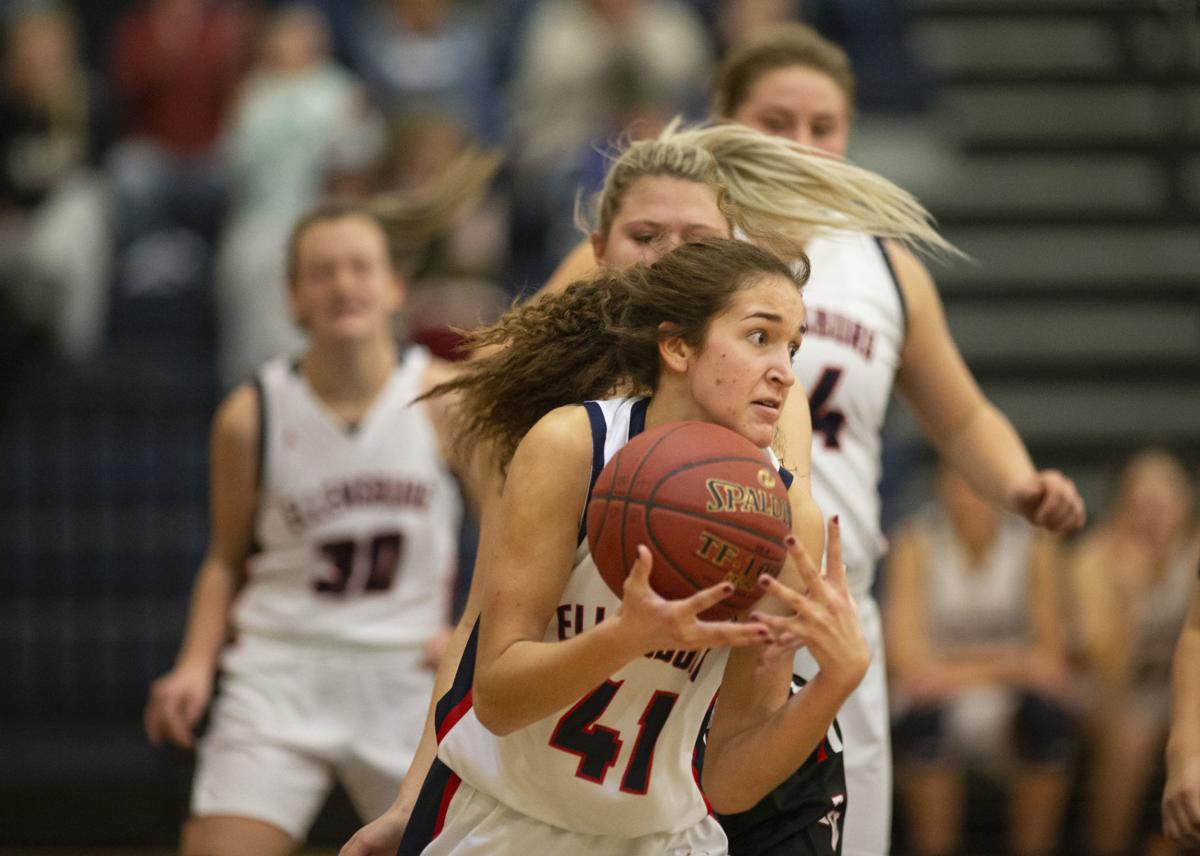 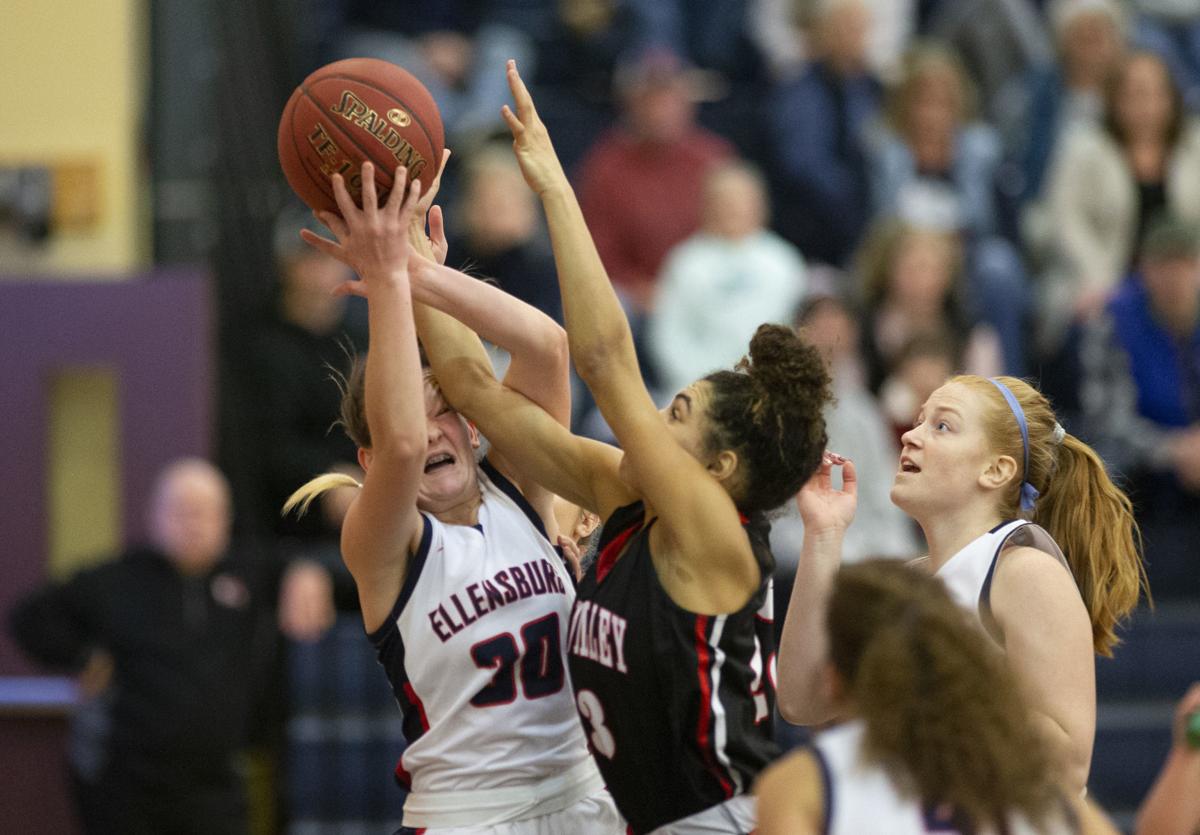 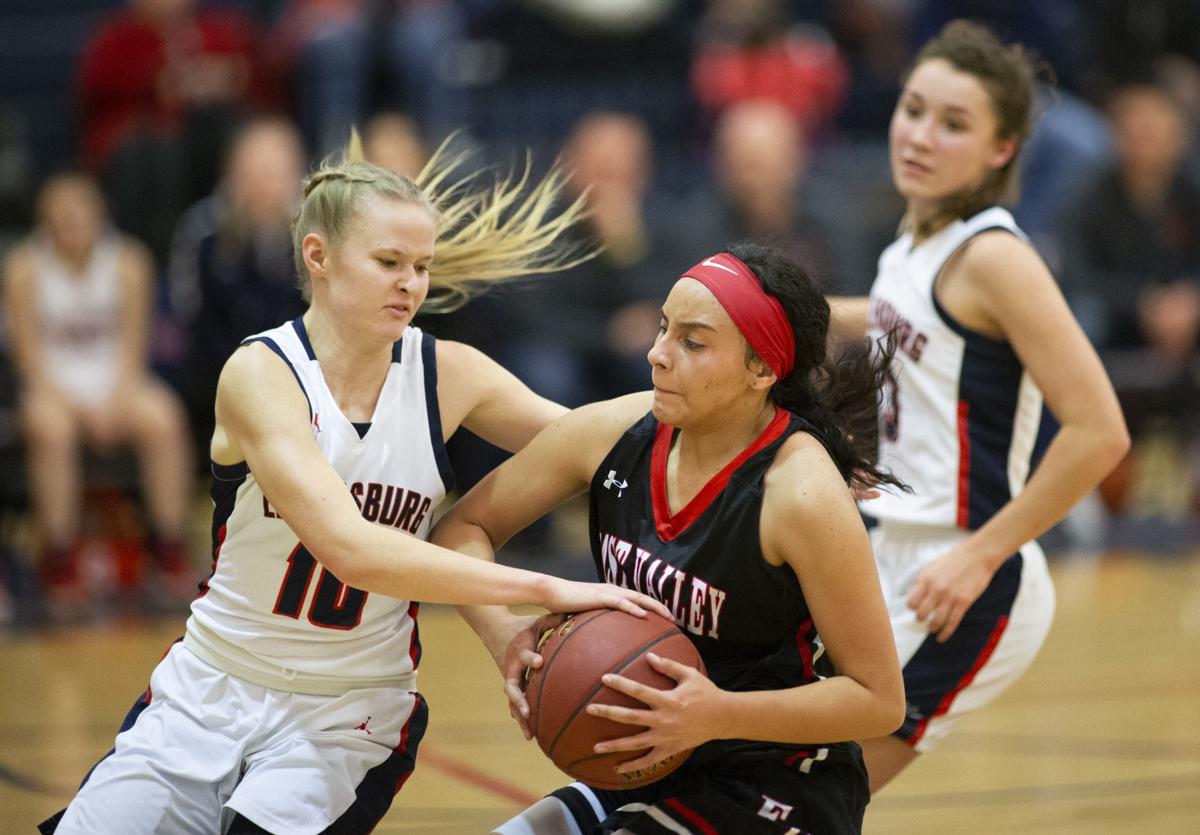 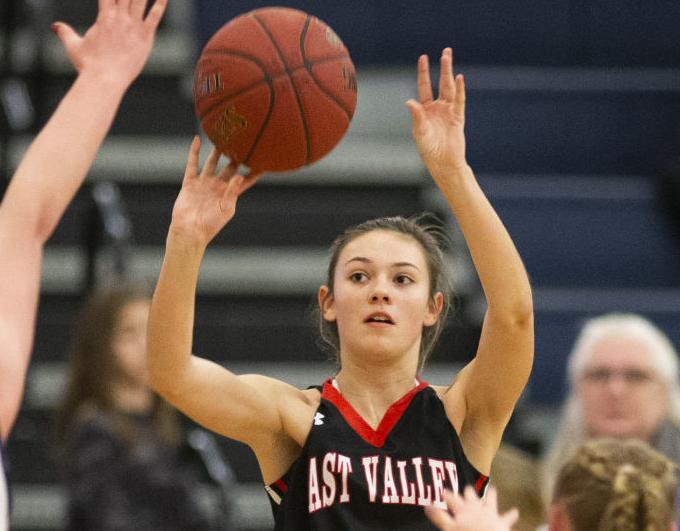 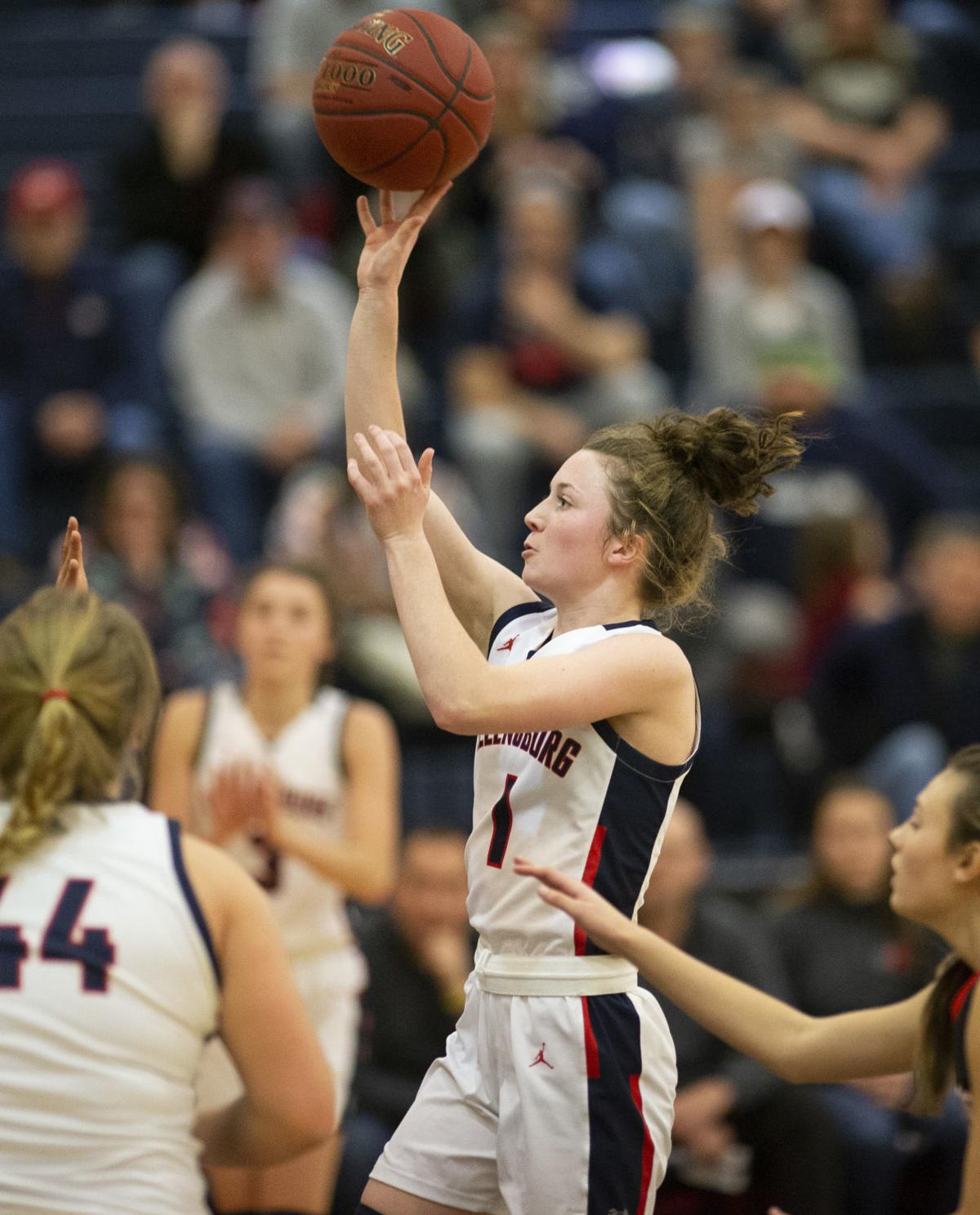 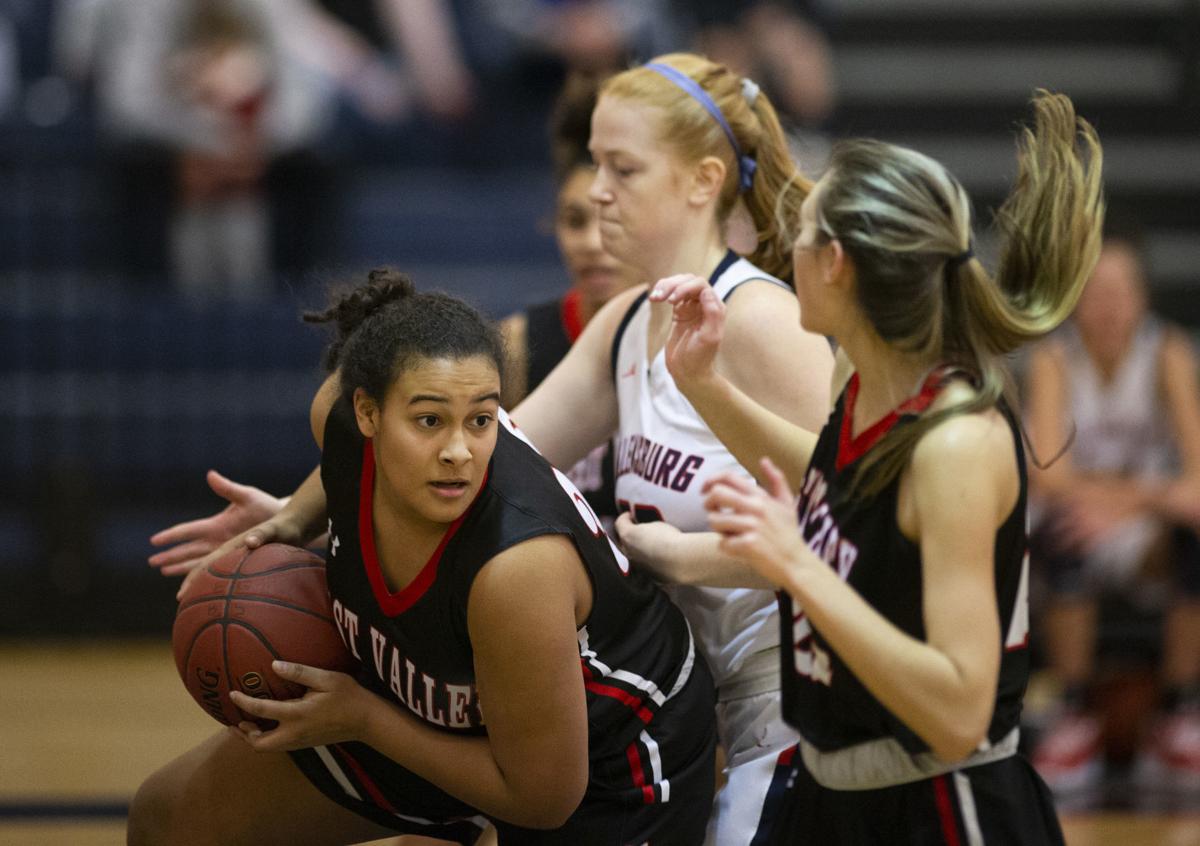 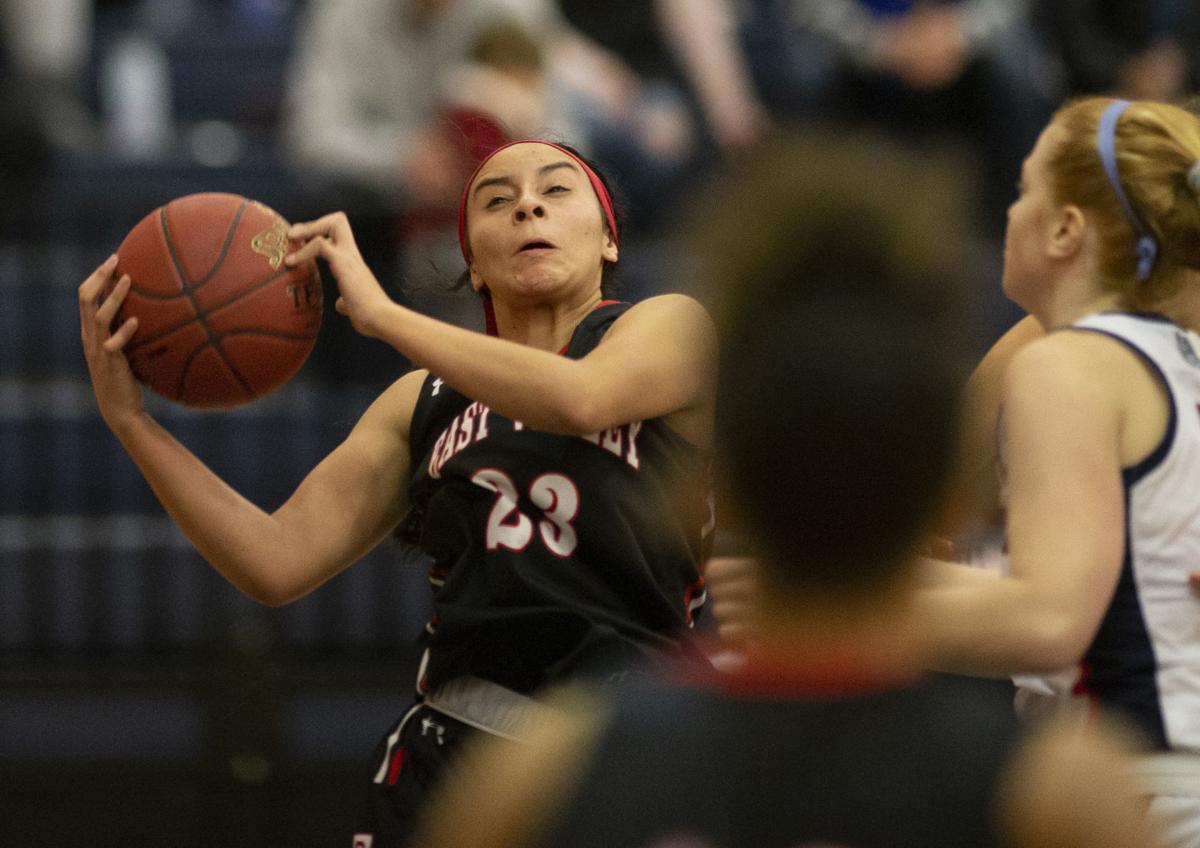 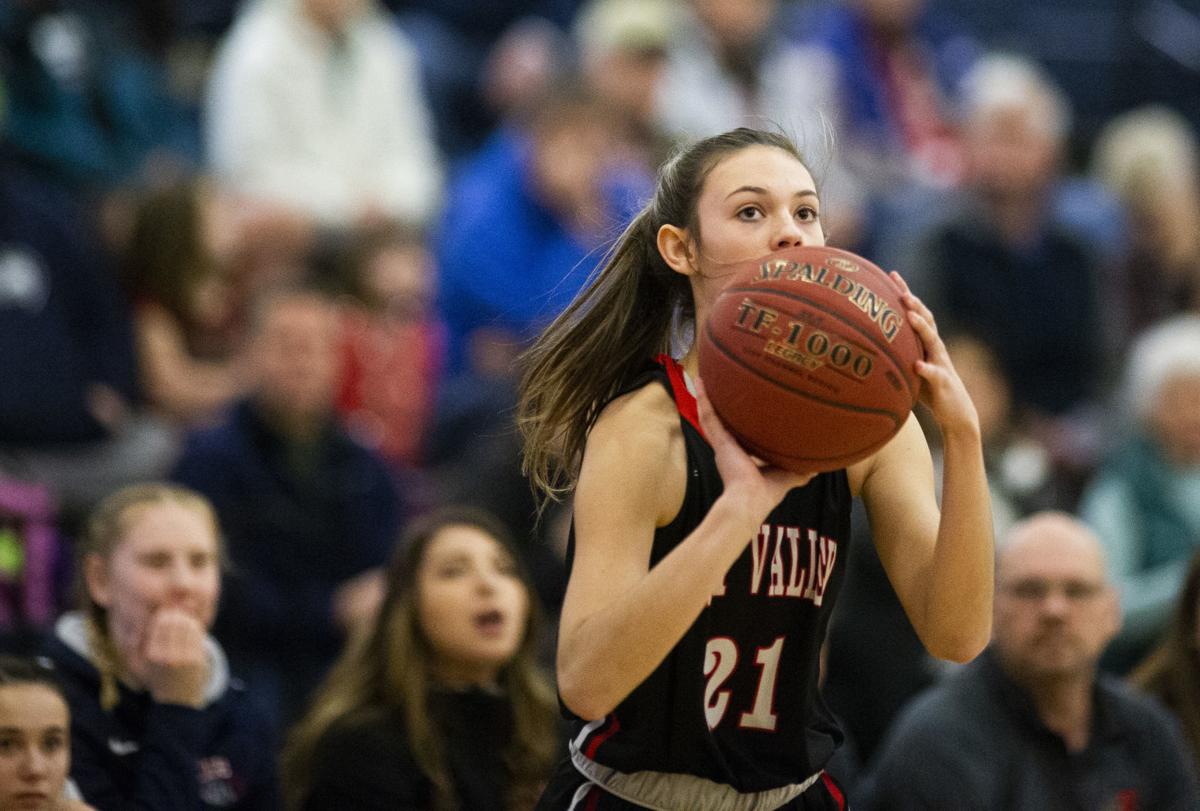 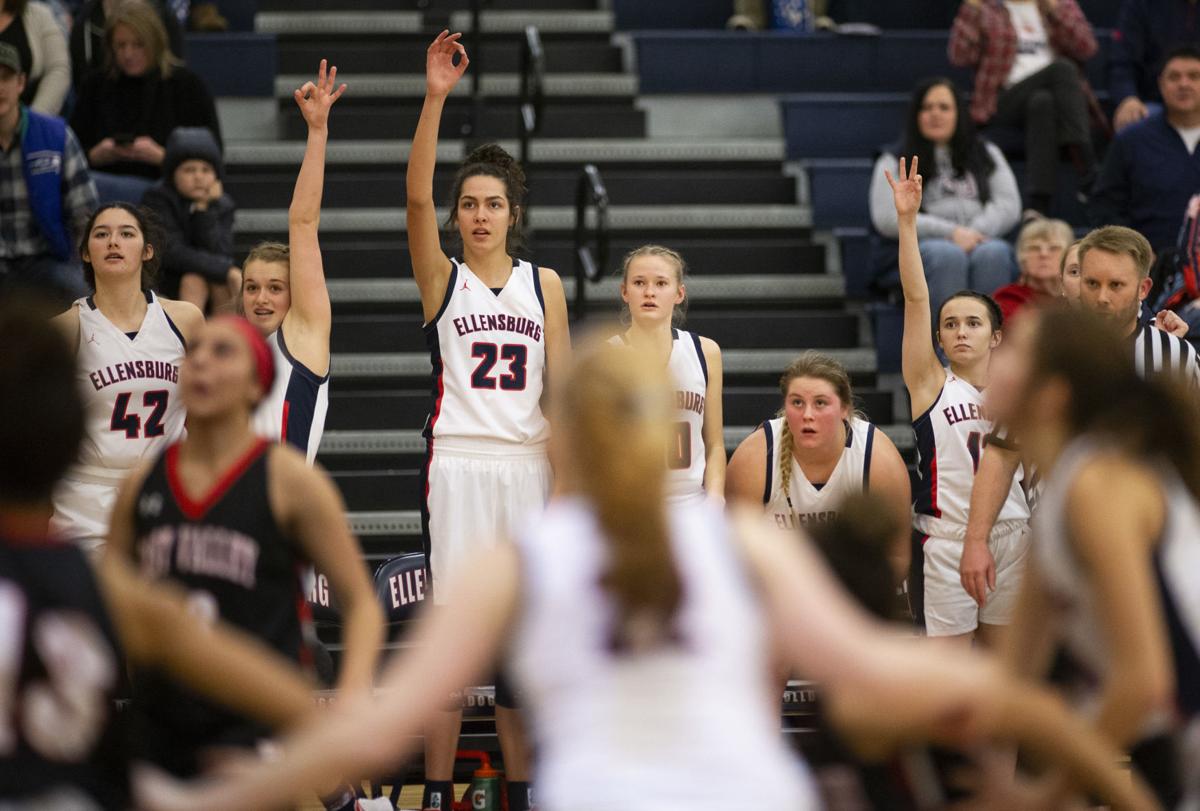 Ellensburg players celebrate a 3-pointer late in the fourth quarter during a 49-43 victory over East Valley on Saturday, Jan. 11, 2020 in Ellensburg, Wash.

Ellensburg's Brinley Hagemeier is fouled while scoring by East Valley's Haiden Harrington with 1:31 left in the game on Saturday, Jan. 11, 2020 in Ellensburg, Wash.

When shots from the outside wouldn't go down, the Bulldogs turned up their ball pressure and eventually leaned on senior guard Brinley Hagemeier. She responded to lead Ellensburg past East Valley 49-43 with an assist from two 3-pointers by freshman Rylee Leishman during a 9-0 run to close out the game.

"We really needed to pick it up and we forced a lot of turnovers," Hagemeier said. "Lots of ball deflections and then that led us into transition points."

She scored eight of her game-high 17 points in the fourth quarter, including a three-point play to put the Bulldogs ahead 46-43 with 1:21 remaining. Leishman hit a three with 33 seconds left and even came up with Ellensburg's 10th steal of the game on East Valley's final possession.

The Bulldogs looked as though they might notch their seventh straight win by 20 points or more when their aggressive defense and three 3-pointers turned a 7-2 deficit into a 22-9 advantage midway through the second quarter. But the Red Devils' eight 3-pointers, including three by Emily Wright in the second quarter, kept them close and eventually brought them all the way back.

East Valley nearly erased a big deficit in the season opener against Ellensburg, which pulled away late for a 56-45 win. The defense looked even more effective against Ellensburg's offense in the rematch, holding the Bulldogs to their season-low in points despite the absence of starter Bryana Barry and foul trouble for athletic junior forward Ashlynn Sylve.

She came up with a key basket to cut the lead to two before Karina Hibbitt's fourth 3-pointer put East Valley back in front 41-40. The junior scored 14 points and Wright matched that total by grabbing an offensive rebound and hitting a layup to give the Red Devils a 43-40 lead with 2:52 left.

From there, Ellensburg took over and coach Jeff Whitney liked the leadership he saw from Hagemeier, one of just two seniors in the Bulldogs' eight-player rotation. When she needed to pass, Hagemeier showed no hesitation in trusting Leishman, the freshman who scored nine points off the bench.

"We know she can do that kind of thing," Hagemeier said. "She played against great girls all summer long, so we know she's capable of that."

Whitney praised his team's mental mindset to come away with only its second single-digit win in 12 games. Hagemeier enjoyed the opportunity to play meaningful minutes down the stretch and said it should be valuable for Ellensburg in the postseason.

It could face two of its tougher remaining tests next week against a Grandview team that opened up an 11-0 lead before Ellensburg bounced back to win 50-40, followed by a road trip to Prosser, who lost 49-45 at Ellensburg. Whitney said so far the Bulldogs have done well to handle the pressure that comes with a perfect record and the No. 2 ranking in the 2A RPI, but he knows it's only going to get tougher.

"We talk one game at a time, but there's still pressure," Whitney said. "I'd be lying if I said there wasn't.