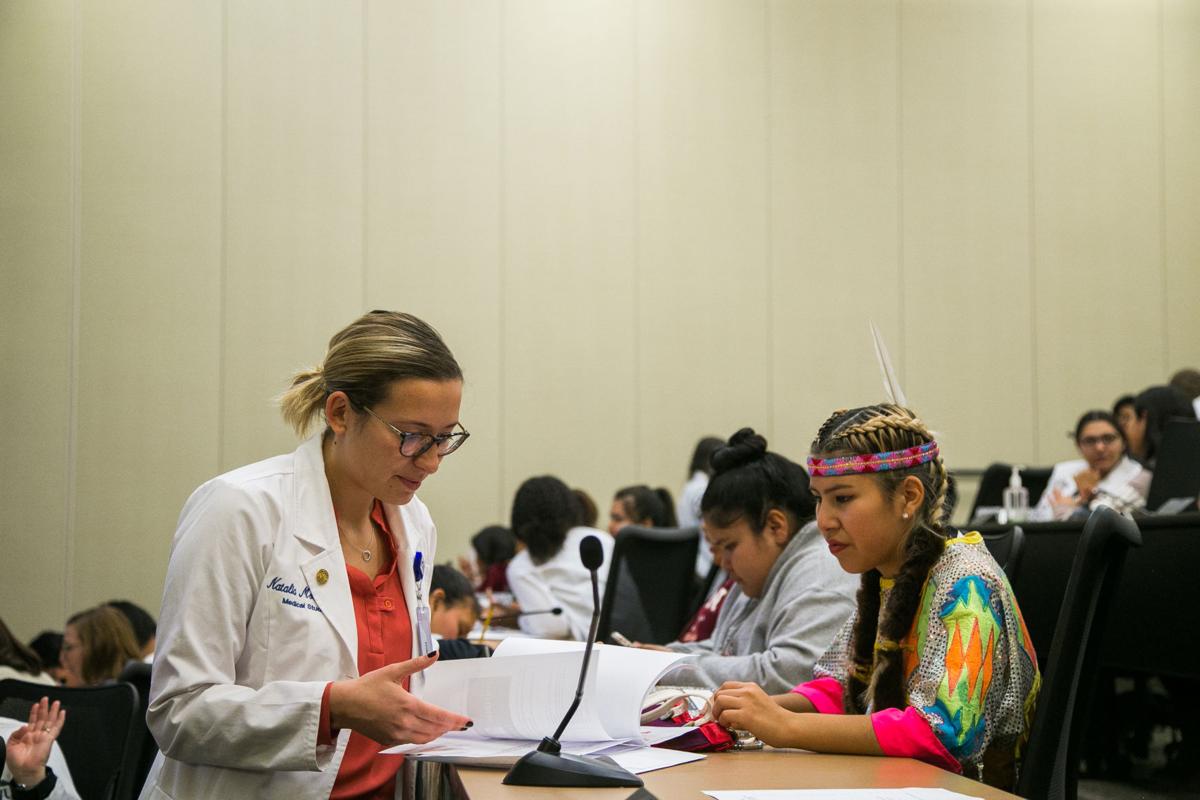 Natalia Mosailova, a medical student at Pacific Northwest University, reflects with her mentee, Hilarie Hannigan, a junior at Yakama Tribal School, at a welcome event for Roots to Wings, a health sciences mentorship program for Yakama Nation and Hispanic youth, on Wednesday, Oct. 18, 2017, in Yakima, Wash. To honor the students’ cultures, Yakama Nation Tribal School Dancers and a group of local Aztec dancers performed as part of the introductory event. (JOVELLE TAMAYO/Yakima Herald-Republic) 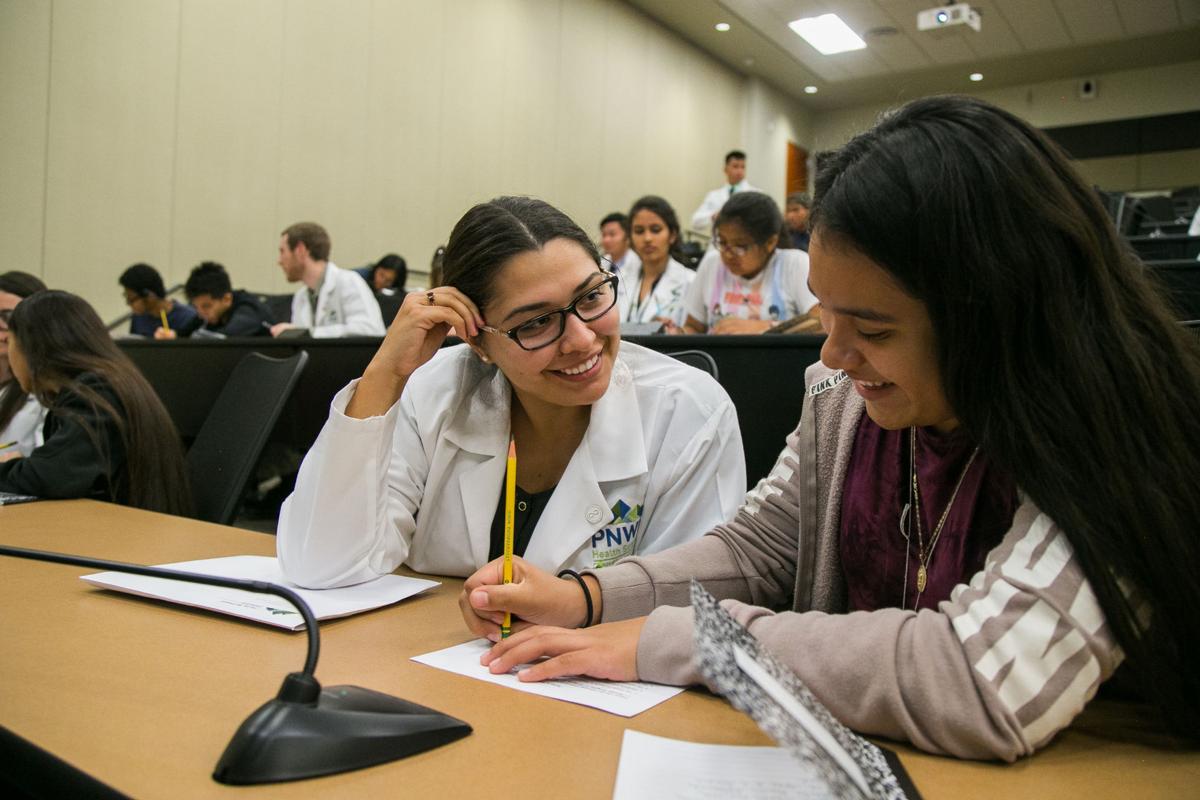 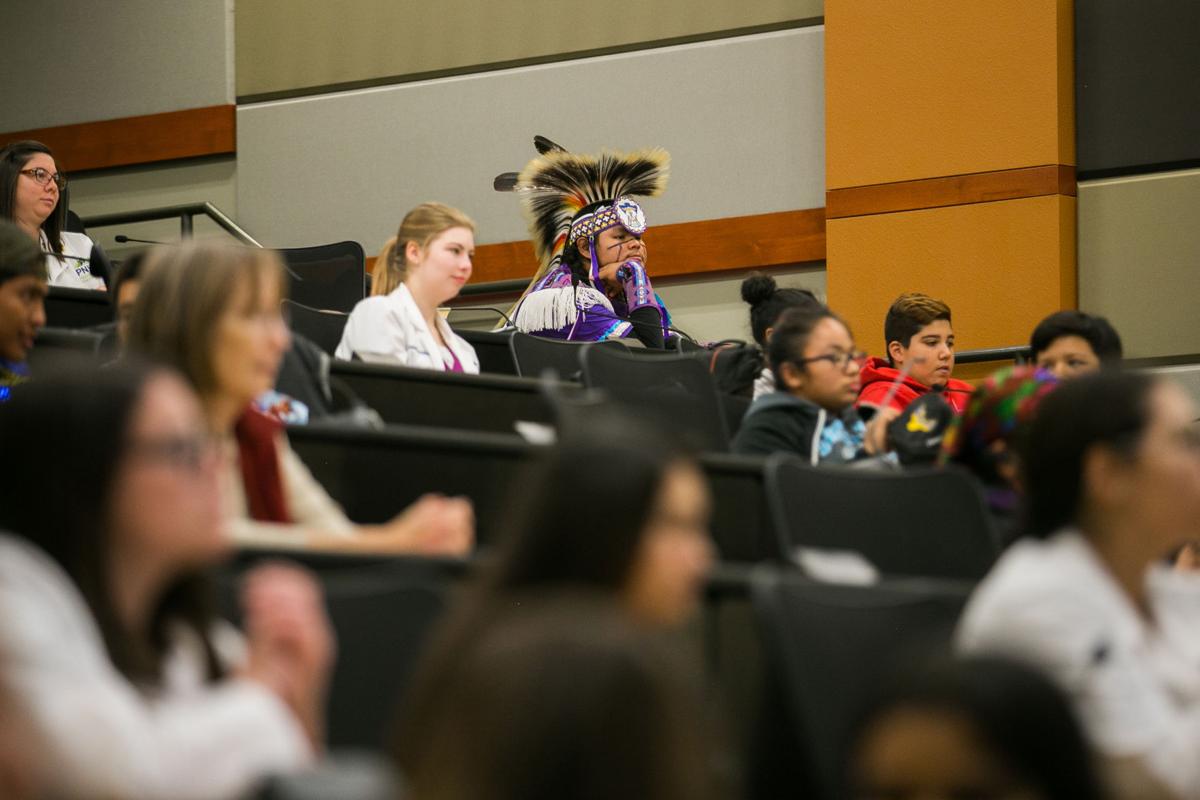 Mentees and mentors listen to speakers during a welcome event for Roots to Wings, a Pacific Northwest University health sciences mentorship program for Yakama Nation and Hispanic youth, on Wednesday, Oct. 18, 2017, in Yakima, Wash. To honor the students’ cultures, Yakama Nation Tribal School Dancers and a group of local Aztec dancers performed as part of the introductory event. (JOVELLE TAMAYO/Yakima Herald-Republic) 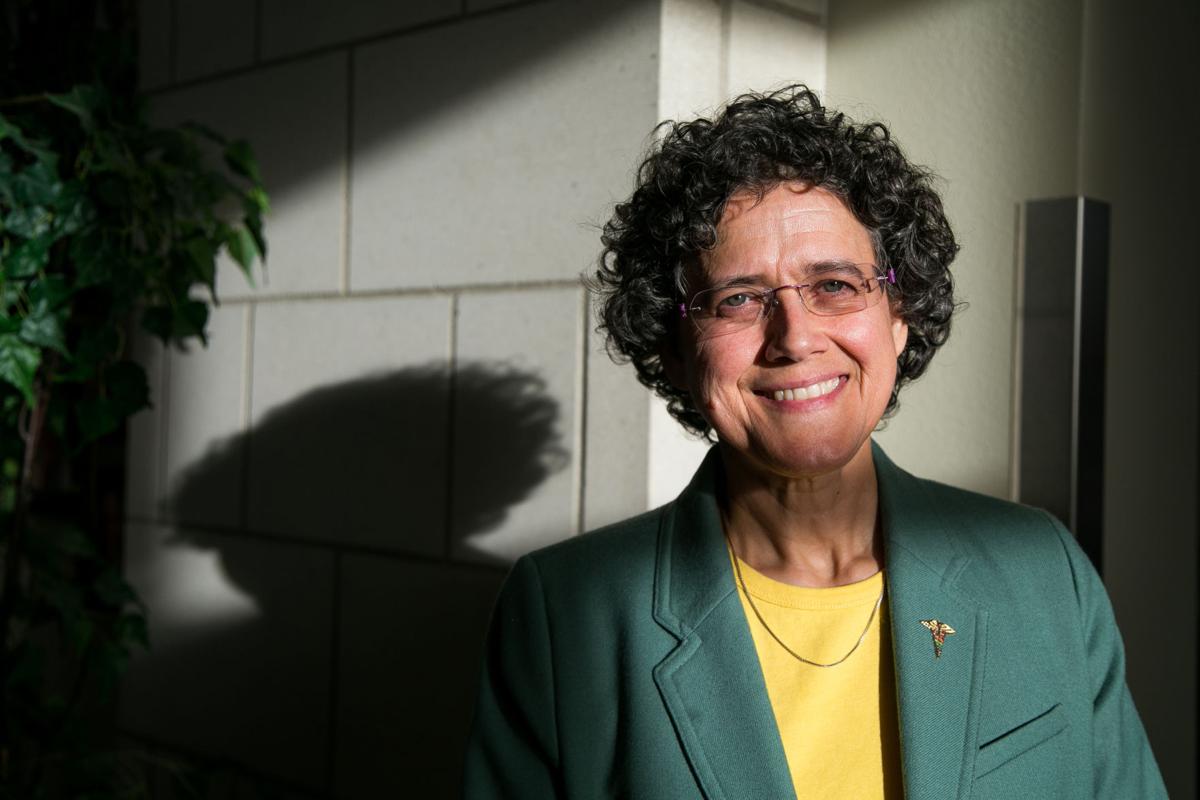 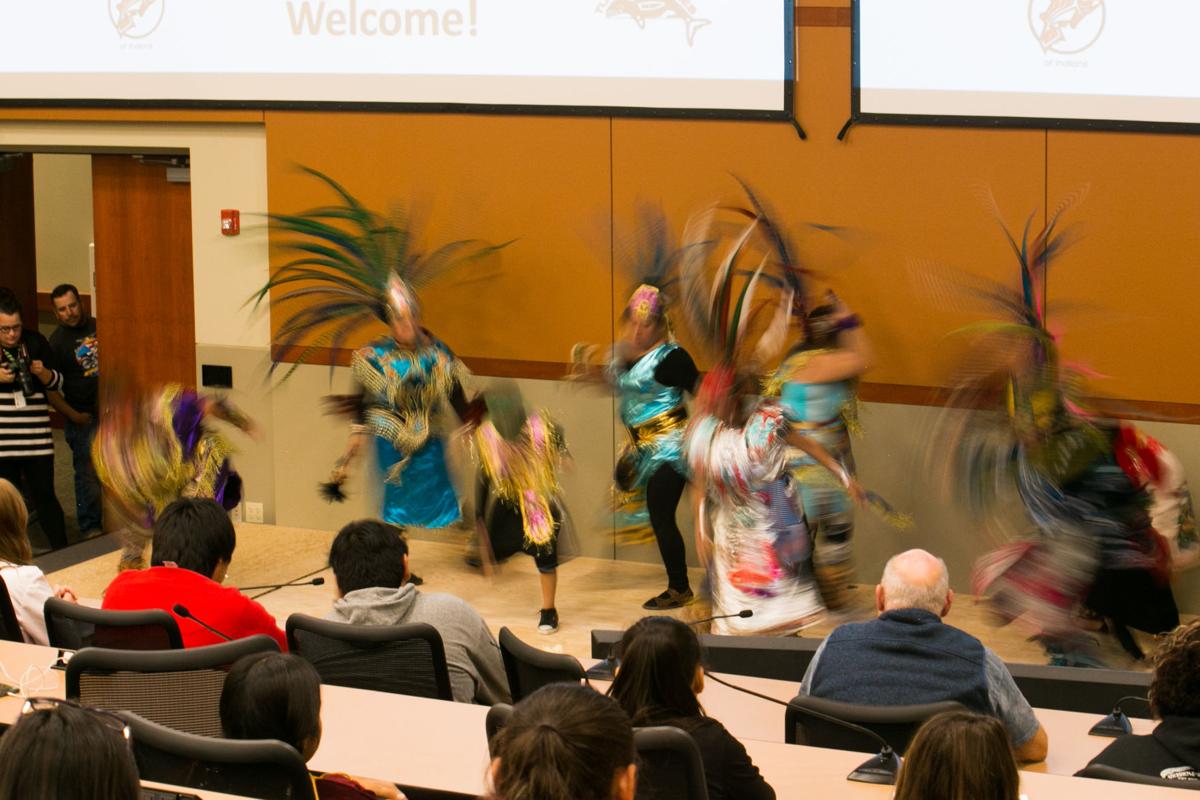 Natalia Mosailova, a medical student at Pacific Northwest University, reflects with her mentee, Hilarie Hannigan, a junior at Yakama Tribal School, at a welcome event for Roots to Wings, a health sciences mentorship program for Yakama Nation and Hispanic youth, on Wednesday, Oct. 18, 2017, in Yakima, Wash. To honor the students’ cultures, Yakama Nation Tribal School Dancers and a group of local Aztec dancers performed as part of the introductory event. (JOVELLE TAMAYO/Yakima Herald-Republic)

Mentees and mentors listen to speakers during a welcome event for Roots to Wings, a Pacific Northwest University health sciences mentorship program for Yakama Nation and Hispanic youth, on Wednesday, Oct. 18, 2017, in Yakima, Wash. To honor the students’ cultures, Yakama Nation Tribal School Dancers and a group of local Aztec dancers performed as part of the introductory event. (JOVELLE TAMAYO/Yakima Herald-Republic)

When she presented in August alongside roughly 1,000 high schoolers from around the country, Boeing offered her a scholarship to pursue a degree in health sciences, as long as she keeps her grades up.

Now Jim wants to go into obstetrics and gynecology so she can come back to the Yakama Reservation and serve her community there.

“It really got me motivated,” she said. “I got on top of my school work; I actually got better grades after — it was like reality hit me.”

Jim is in her second year of participating in the Roots to Wings program, a collaboration between Pacific Northwest University of Health Sciences, the Yakama Nation Tribal School and the Mt. Adams School District that aims to get more Native American and Hispanic youths interested in careers in medicine and science. It was through Roots to Wings that she applied for the NIH internship.

The program pairs middle and high school students with PNWU medical students in a “co-mentoring” model, where the kids teach the med students about their traditions and heritage, and the med students teach them about medicine and pursuing higher education. There are 27 PNWU students and 75 youths in the program this year, ranging from sixth to 12th grade.

By keeping culture front and center, directors of the program aim to show the young students that they are welcome and wanted in the medical field.

“Roots to Wings is actually an educational pathway for underrepresented youth to enter the health sciences,” said Dr. Mirna Ramos-Diaz, a family medicine professor who spearheaded the program at PNWU four years ago. “It makes a huge difference in someone’s medical care if I understand your native traditions and values, and I can speak your language.”

Nationwide, American Indian/Alaska Native students accounted for only 0.2 percent — 47 individuals — of the roughly 24,000 medical school graduates in 2015, according to figures from medical school associations. Only 4.4 percent of graduates were listed as Hispanic.

By contrast, 60.8 percent of graduates were white.

PNWU was created specifically to increase the number of physicians in rural, medically underserved areas throughout a five-state region that includes Washington, Wyoming, Alaska, Montana and Idaho.

Out of the 146 students in the school’s class of 2021, 6 percent are Hispanic, 67 percent are white and none are Native American, according to the university.

“(If) our students are not represented, how are we going to change the health care of people in rural areas in this country? ... We can’t do that,” Ramos-Diaz said.

Ramos-Diaz is Cuban and said it makes a huge difference to her Spanish-speaking patients that she can relate to them on that level.

“The only way to transform a community is by educating its children and allowing the children to become physicians, lawyers, whatever, so they can go back and improve their own society,” she said. If students can come back to practice on the Yakama Reservation, “It will improve the health and the quality of care of their own people because they respect their values and traditions and they know their needs.”

To enroll more students from underrepresented communities, recruiters from PNWU visit all regional colleges and universities in the five-state area, and target job fairs and recruitment conferences specifically geared toward minority students in the sciences, says LeAnn Hunter, director of enrollment services.

The barriers facing minority students from rural areas to enter medical school are similar to the barriers all rural students face, she said.

The financial demands of moving to a city with a medical school further hinder rural students, she said, which is why local medical schools embedded in those areas help make medical education more realistic: “Oh, I can go to school here in my own community.”

To ensure that Roots to Wings would be culturally sensitive to the students it was hoping to serve, PNWU has worked closely with tribal elders from the Yakama Nation as well as teachers and leaders from the Hispanic community to build a program grounded in mutual respect.

One big sticking point was the cadaver lab at the university. In Yakama tradition, only a select few elders are authorized to work with the deceased. Children are never allowed near dead bodies.

Some tribal leaders were hesitant about that part of the curriculum, said elder Tony Washines.

But as they recognize the critical need for Yakama Nation doctors and other medical professionals, they found a way to compromise: Elders from the tribe come to the lab and do a purification ceremony, using rose water on the young students before and after they enter, while also bringing a focus back to the people who donated their bodies in the first place.

“Many of the mentoring students (from PNWU) asked if they could participate in that, and they felt comfortable with it, and they appreciated it,” Washines said. “They said, ‘I felt a whole lot better when I was going in there, knowing I was looking at a body that had a life and had a story.’ It made it much more personal.”

He said tribal leaders also spoke to PNWU to ensure the university makes every effort to return the remains to their families and give them a proper burial after being used in the lab.

Roots to Wings also creates a space to talk about native healing practices and how they relate to “Western” medicine, including spiritual healing through song and dance as well as the traditional roots and berries that have been used for generations, predating modern medicine.

The 2017-18 program year began its first meeting on Oct. 18 with an invocation prayer and song by Washines, as well as traditional dances and drumming by the Yakama Nation Tribal Dancers and the Aztec-Mayan dance group Tlaloc, named for the god of water.

The dance groups explained the meaning behind their movements — a welcome dance; a dance to celebrate the four elements; dances to honor ancestors and significant animals.

“Allowing us to teach them about our culture, it just encourages them, and validates for them that culture is huge, that they need to be respected from where they are,” said Aztec dancer Yeymi Ronan-Aranda, who introduced the group. “It doesn’t mean that if you’re going to become a doctor, you’re going to forget your roots.”

After the dances were over, the students broke away to meet with their mentors in groups of three and four.

Even the students who came just as part of the dance group were clamoring to return to PNWU afterward, special education teacher Gretchen Feider said.

“Our school doesn’t have a science laboratory. We do all our science classes out of books,” she said. “So this is a real benefit to our students, because they actually get to see those kinds of environments.

“It’s pretty amazing to see them kind of light up when they come into those rooms, because it’s something totally foreign to them.”

The students meet with their mentors once a month at PNWU, busing in from White Swan, Harrah and Toppenish. Because of the wide age range, the lessons tend to be more demonstrative than technical, but still academically rigorous, says White Swan High School Principal Joey Castilleja.

Last year, one lesson revolved around diabetes and sugar, where the students worked with sugar cubes while participating in group discussion. Then they came back to school and had some tough conversations about the role diabetes plays in the Valley, he said.

Fifty students from White Swan School District are participating this year. The PNWU partnership aligns with the district’s goal to get students engaged and dreaming big about their education, Castilleja said.

“It’s really cool. The kids, they get to leave their middle school classrooms and they walk into a full-on medical school, and they see people that are just like them in white coats, with plans of being doctors,” he said. “And not only get to see them, but build real relationships with them.”

The PNWU students who volunteer as mentors hope to open the young students’ eyes to the wealth of possibilities in health science careers.

“I really want to encourage more women of color to come into this field, because we do need a more representative population,” said first-year med student Rebecca Bolla, 28, who is of Indian descent. “You need people from your background to connect with, or just feel comfortable with. You need to be able to talk to your physician and let them know what’s going on without worrying about them judging.”

Bolla was interested in medicine from a young age and had the benefit of sitting in on science and math classes when her older sister was in college to see what it was like.

She’s excited to show her Roots to Wings students what the next steps are, and to be there for them in whatever questions they might have.

And she’s excited to learn more from them. Hearing about the younger students’ lives and needs helps put all the 15-hour days of studying into perspective, she said.

“When you have that interaction, you’re like, ‘This is it,’” she said. “These are the people I want to serve. This is why I can keep going.”

Total (including both MD and DO colleges): 24,028 graduates

When she was 16, Emily Washines would walk alone from Toppenish High School to the Yakama tribal school several blocks away to learn her tradi…