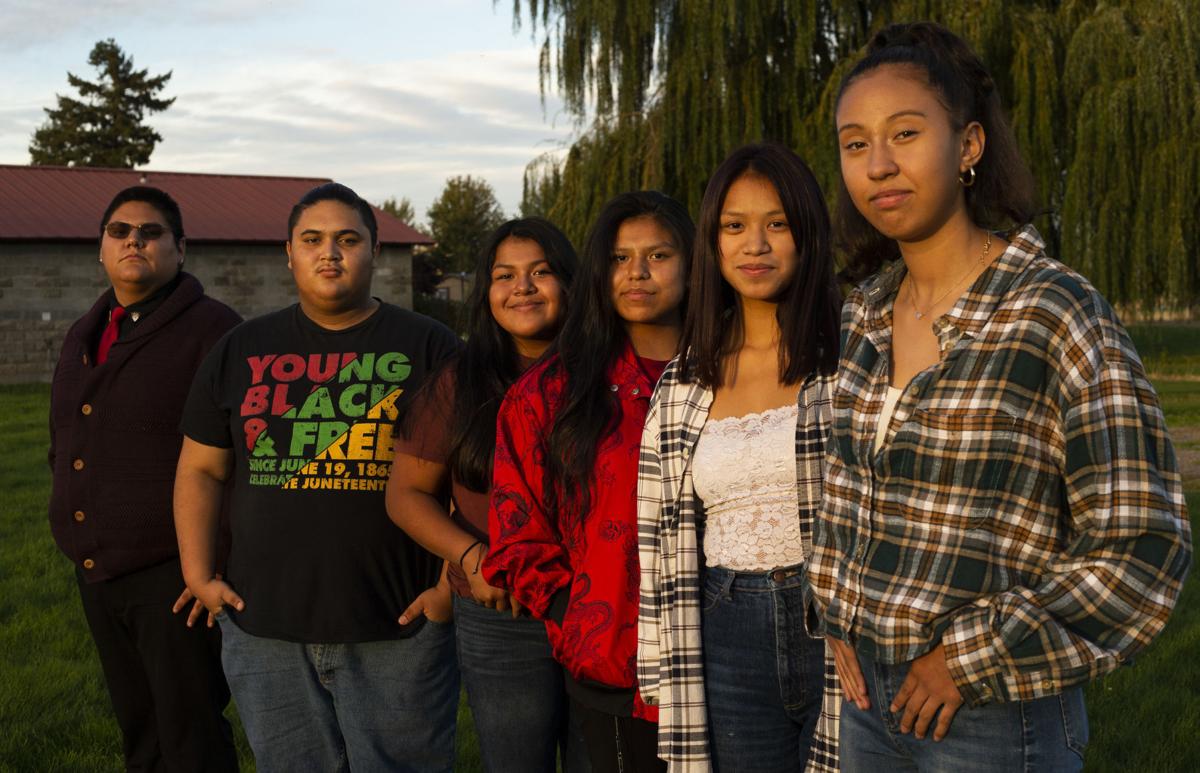 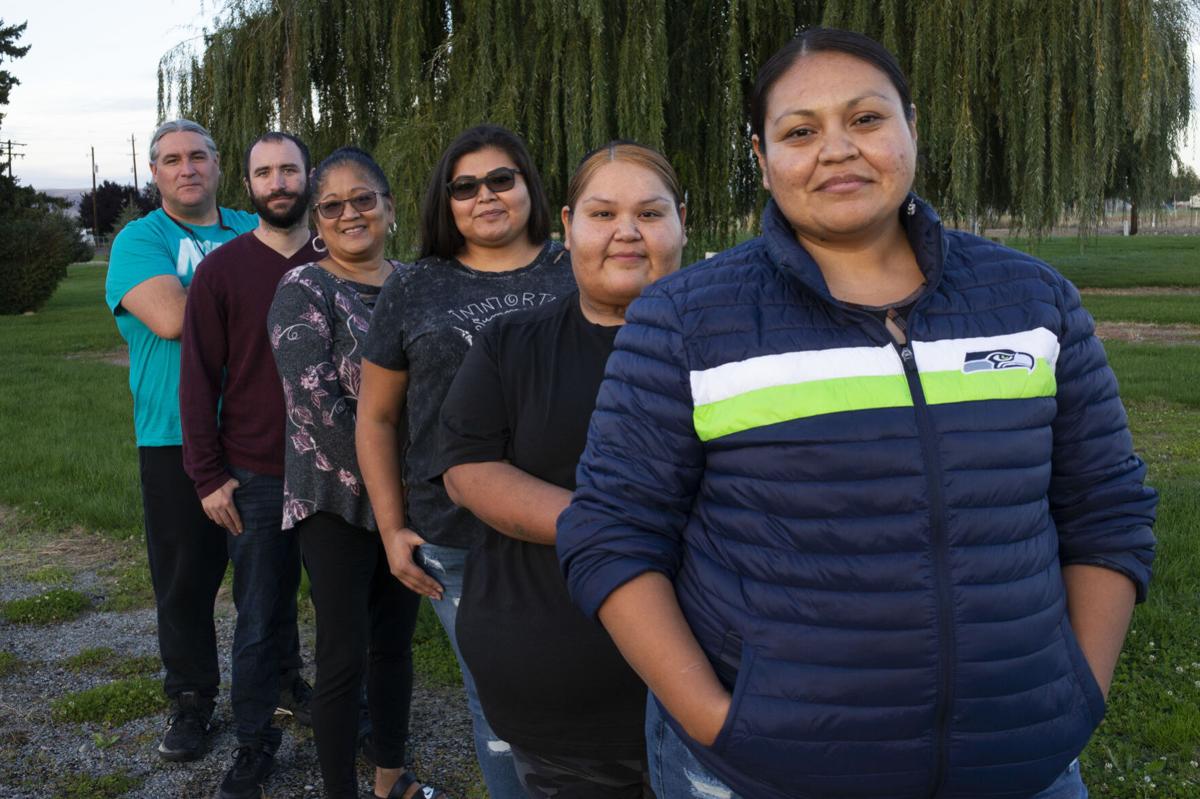 Shayla Tomaskin was in seventh grade when she became involved with Mending Wings, a nonprofit on the Yakama reservation that works with and supports Native youth by melding Indigenous culture and Christian beliefs.

It continued through high school, and Tomaskin enjoyed her time with the Wapato-based organization so much that she started volunteering after she graduated. Along with stints as a paid staff member, Tomaskin has been volunteering ever since.

“I really enjoy it. It’s a really great experience. I feel like Mending Wings is a really positive thing for the reservation,” said Tomaskin, 33. She works at Legends Casino in Toppenish and is attending Heritage University, pursuing a degree in criminal justice.

Corey Greaves, who founded the nonprofit for middle and high school Native youth with his wife Gina in 2006, became a father figure for Tomaskin. Mending Wings changed her life, and she looks forward to the day when her daughter is old enough to participate.

As the founders, leaders and participants in Mending Wings programs already know, Native youth can face many challenges.

The Mending Wings website at https://mendingwings.net/ highlights multiple somber statistics, including that Native people have the highest teen suicide rate in the Western hemisphere at 62% higher than the national average. It is the second-leading cause of death among Natives ages 15 to 24, according to the website.

One out of three Native females will experience sexual assault in her lifetime, and there are numerous cases of missing and murdered Indigenous women and men on and around the 1.3-million-acre reservation, most of them unsolved. That centuries-long crisis has persisted throughout the United States and around the world.

The organization is “mending the wings of our youth so they can fly again.” And with the support of their Mending Wings family, they do.

“We want Mending Wings to be a safe environment where teens can express and be themselves,” Gina Greaves said.

In late August, the Mending Wings’ Dancing Our Prayers group and drama team traveled to Orlando, Fla., and performed at Universal Studios on a community stage. As far as the park staff knew, they were the first Native youth group to perform there, said youth leader Josephine Buck.

They also performed for several churches and spoke with young tribal citizens of the Seminole Nation of Florida, which for many was more meaningful than the flashy scenery and fun rides at Universal.

Eight youths had been chosen by adult leaders and young peers to make the trip. A grant for Dancing Our Prayers paid for new regalia, hand drum bags, items for the drama skit they would perform and other expenses. Students each pitched in $200 of their own money for the trip, said Jeremy Vargas, who directs the Dancing Our Prayers program, teaches and plays in the drama skit. He also drums with the group.

Everything was set when a crash Aug. 5 near Harrah killed three young men who were well-known in the Lower Yakima Valley: 16-year-old Samuel Miranda, 18-year-old David Alexander Garcia Jr. and 17-year-old Demetrius E. Randall-Mayokok, all of Wapato.

Randall-Mayokok was a youth council leader for Mending Wings. As Vargas noted during a recent gathering at the All Nations Center near Wapato, Mending Wings youth and leaders refer to him only as “D.” Following Yakama tradition, they would put away photos of him and won’t use his full name until a proper memorial is held. That generally happens a year after a person dies, but that tradition has also been impacted by the COVID-19 pandemic.

The seven Mending Wings youth who made the trip were Dewy Bill, Jesse James, Kamaya Garcia, Fawn Eyle, Ellia-Lee Jim, Carmen Buck and Josh Sampson. They all had one or two roles, which may have been dancing, drumming or performing in the drama. Chaperones included Tomaskin, Vargas, Buck, Corey and Gina Greaves, and Annaweinita Miller.

The group didn’t replace Randall-Mayokok on the trip to Orlando from Aug. 20-30. In memoriam, they set out a special empty chair with his ribbon shirt, moccasins and a drumstick at every performance, because Randall was a drummer. They also brought back items from the places they visited and put them on his grave.

Altogether, they performed six times at four different places: Universal Orlando; two churches, in Melbourne and Merritt Island, with two services at each; and the Seminole Reservation at the invitation of Seminole leaders.

“They wanted our youth to encourage their youth to learn their culture,” Corey Greaves said.

That also involved speaking to some Seminole youth. Bill admitted he was nervous, but said he “just kept telling jokes” in hopes he got his point across. He enjoyed watching others grow in God’s work on the trip, Bill added.

“Creator was working in all of us,” he said.

Though they couldn’t get too far into the ocean because of riptides generated by a hurricane — and the pervasive humidity made Carmen Buck sweat through her jingle dress, along with some sore feet from all that walking at the sprawling theme park — overall it was a fun experience, James said. His parents met through Mending Wings.

They flew back to Seattle on Aug. 30, which was Eyle’s birthday. In normal times the flight attendants would have led passengers in singing “Happy Birthday,” but COVID-19 precautions didn’t allow it. Eyle would likely have been happily mortified by that, as she admits she is shy. Mending Wings has helped bring her out of her shell, though.

It was an emotional trip. Everyone who went to Florida, no matter if they’d been there before or even flown before, took away special memories. The beach was among them for Miller.

“When we stayed on the beach, I’d get up early to watch the sun rise,” she said.

Family legacies, important programsLike Tomaskin and Vargas, Miller became involved with Mending Wings as a youth. She leads Mending Wings’ SLAM (Students Learning About Missions) Trips program, through which youth visit and work for other churches when school is out, and other churches come to the Yakama Reservation to do the same.

She’s also the temporary president of Mending Wings while Corey Greaves is on sabbatical.

“We have many programs,” Miller said. All are safe, drug- and alcohol-free. The organization has events, trips, speaking engagements and activities, though COVID-19 has impacted everything, including members’ visits to churches of a variety of denominations.

“Pre-COVID, we would go out about once a month. During winter we didn’t travel as much,” Vargas said.

Along with Dancing Our Prayers and the SLAM Trips, programs include Footprints of Our Elders, Community Healers, Guys & Girls Night, 4-1 Youth and Youth Council. Each meets on a different night and they include learning and practicing traditional drumming and dancing, language and practices such as making wa’paas baskets and tule mats.

They also go out into the community to help elders — giving back is important — and meet others to share their Yakama culture.

Youth Council meets on Wednesday nights. In non-COVID-19 times, there would be close to 60 kids who come to play games, enjoy food, hear announcements and help plan special events. They don’t have to live close to the All Nations Center near Wapato, where Mending Wings holds many programs. A bus picks up students from the city of Yakima all the way to Granger, and many places between.

“Most recently we had a Mending Wings Ball. The Youth Council did the budgeting,” Bill said of the 10-member youth council. He’s the president, and Jim is vice-president.

“They also pick the topics we want to teach on Wednesday night,” Gina Greaves added.

Group founders, youth leaders and youth alike expressed appreciation to All Nations Center for letting Mending Wings host programs and gatherings there. “We have a great working relationship with All Nations,” Corey Greaves said. “They had seen one of our videos and were blown away by our youth.”

He had reached out to Josephine Buck, who started with Mending Wings in 2014 as a staff member. “It felt like a burst of energy,” said Buck, a youth leader for Mending Wings. She is a student in environmental studies at Central Washington University in Ellensburg.

“It does feel like (these) are my brothers and sisters. It has that family feeling. I think that’s why I volunteer. It comes with rewards — when the kids invite me to their graduations” and introduce their own children to her, she said.

Adults with Mending Wings were the ones Miller went to as a young girl when she was struggling with challenges, and today many of the youth call her auntie. They’re all family, to support each other as family. For Tomaskin that means doing the same for her own daughter and breaking generational curses, she said.