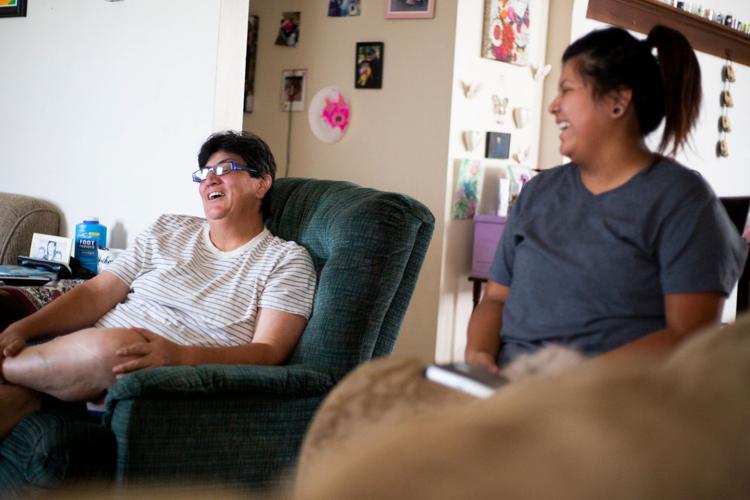 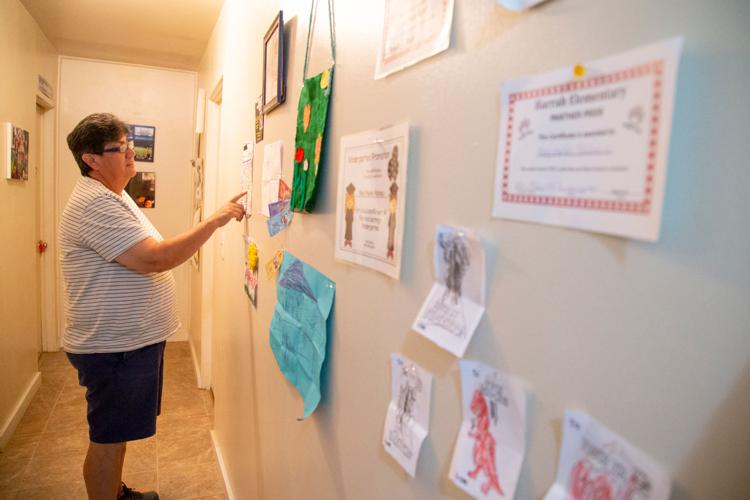 Christina Rodriguez points to notes and certificates of accomplishments Ray Pacheco, 6, earned from school. Ray is one of four siblings Rodriquez took in when their mother was killed in an auto accident in December. (Shawn Gust, Yakima Herald-Republic) 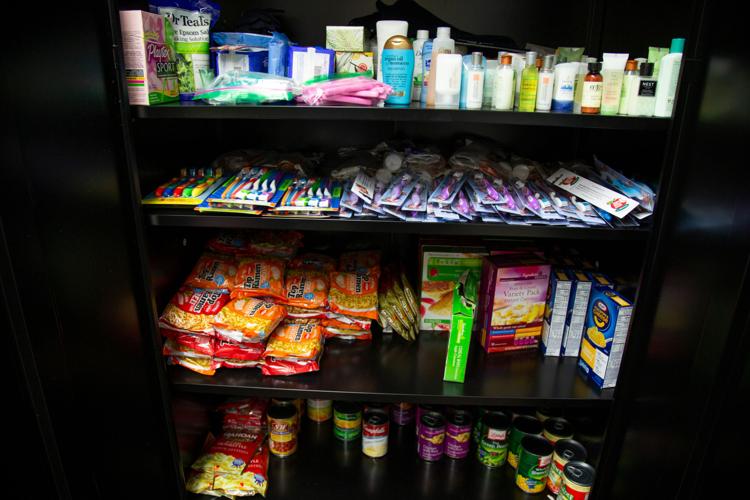 Christina Rodriguez points to notes and certificates of accomplishments Ray Pacheco, 6, earned from school. Ray is one of four siblings Rodriquez took in when their mother was killed in an auto accident in December. (Shawn Gust, Yakima Herald-Republic)

WHITE SWAN — White Swan High School senior Tanika Taylor was placed in the care of her aunt by Child Protective Services as a toddler because of her parents’ substance abuse problems. But in October, a month after turning 18, Taylor left her aunt’s home, saying she was fed up with the arguing and fighting that unfolded throughout her life there.

“I just packed up one night and told her I had enough,” Taylor said during an April interview at the high school.

Since then, she moved three times and subsequently missed significant time at school. She was last staying with her boyfriend’s grandparents and hoped to graduate in May.

“I have a lot to catch up on in school, but I’m on track to graduate,” she said.

About two weeks later, she stopped coming to school and didn’t graduate as a result, said school counselor Jodie Sheppard.

Taylor’s story isn’t unique in Yakima County, where a recent state report shows a 10 percent homeless rate among Native American youths in the county. That’s nearly triple the state average of 3.7 percent and greater than any other ethnic group in the county.

Alarmed at the findings, the state Office of Homeless Youth has provided Yakima Neighborhood Health Services with a $208,000 grant to help fund two outreach workers in the Lower Valley in addition to supporting other services for homeless youths.

“Counter to some perceptions that homelessness is an urban issue, it’s not,” said Kim Justice, state Office of Homeless Youth executive director. “Some of those regions have been overlooked and our job is to bridge those gaps.”

Deep within the reservation, White Swan High School is in the Mt. Adams School District where 1 in 8 students — 115 of the 940 students districtwide — were homeless in the 2015-16 school year, according to state Office of the Superintendent of Public Instruction data.

That’s a rate of 12.2 percent, well above the state’s 3.7 percent rate. Of the 115 homeless students in that district, 78 were Native American.

Native American students also had higher homeless rates in two other districts — Wapato and Toppenish — where they accounted for less than a quarter of the student population, OSPI data showed.

A 2016 report by the state Office of Homeless Youth shows that 10 percent of homeless youth in Yakima County are Native American, a group that only accounts for about 5 percent of the county’s overall population.

“That’s pretty alarming,” Justice said. “We’re hoping to partner with the tribe, knowing the reservation is such a big region of that county.”

Taylor sells beaded earrings and necklaces and uses her $1,000 monthly payments from her Tulalip tribe’s gaming and other enterprise profits to pitch in for food, pay rent and internet services where she’s staying.

“I hustle; It’s still hard because I’m worried about my next meal,” she said in the April interview.

School counselor Sheppard said Taylor could have graduated if she had remained in school.

“She’s the most awesome kid ever,” Sheppard said. “She’s bright and resilient despite all that she’s been through.”

Like Taylor, many students in the district lack a stable home life, said Sheppard, who has been with the district for 27 years.

Couch surfing — staying at friends or relatives for brief periods of time before having to move on to another place — is common at the middle and high school in White Swan, Sheppard said.

These youths are usually escaping family problems such as parents struggling with alcohol and drug abuse and don’t feel safe at home, she said.

“That happens all the time out here,” Sheppard said. “So many of our kids are not being raised by their parents; they’re being raised by uncles and grandparents or literally a neighbor.”

Christina Rodriquez, who works at the Mt. Adams School District as a tutor and mentor, took in five siblings when their mother was killed in an auto accident in December. Months later, one of the siblings, 15, left to stay with his uncle because he didn’t like her rules, but the rest remain living with Rodriguez, who resides in the district.

“I didn’t want them to be separated,” Rodriguez said. “I wanted them to be all together.”

One of the siblings, Elizabeth Jaramillo, 17, a senior, hopes to graduate from White Swan High this coming year while her older sister, 20-year-old Lucille Jaramillo, plans to return to Yakima Valley College.

There are three fathers among the five children, and only the father of the youngest two, Ray, 6, and Louisa, 11, is involved — he visits them on weekends, Rodriguez said.

Rodriguez said Ray’s and Louisa’s test scores have improved since living with her, and that she wants to provide a stable environment so all of them can succeed.

“I told them they can stay here as long as they want,” she said in her living room one recent morning. “This is home and I hope they feel like this is home.”

In another all-too-common case, a 15-year old sophomore — whose name is being withheld to protect his identity — has lived with his grandparents for the past year because his parents have substance abuse problems.

“When I’d stay at the house, they’d always go to the casino, drink and stuff,” he said last April at the school. “At my grandparents, it’s calm — They don’t do too much. They go to church.”

About 20 miles east of White Swan, the situation is similar in the Wapato School District. Many families are doubled up under one roof, living in homeless encampments, cars or couch surfing, said Marilyn Bergevin, homeless liaison for the district.

A mass eviction at a tribal housing project in 2016 there sent more than 200 tribal members onto the streets. They were evicted for not following lease agreements that long had gone unenforced.

That sent many into homeless encampments, including one at the tribe’s RV park in Toppenish, where tiny homes were erected as temporary housing for nearly 50 families, about 130 people including children and infants.

But encampments in Wapato — often in nearby fields — still exist.

“It’s hard for these families,” Bergevin said. “We’ve had encampments around town the city has torn down. A lot of them are adults, but if we find kids out in those areas, we try to find out what we can do to support them and keep them in school. It’s a very daunting and heartbreaking task.”

Amid sprawling hop fields and vineyards deep within the Yakama reservation, White Swan is far removed from most social and health services. Here, there’s no grocery store, hospital or clinic, and it’s a 40-minute drive to the nearest Walmart.

Students at the middle and high school often tap a food pantry in his office filled with noodles, soups, cereal and other nonperishable food items as well as soap, toothbrushes and other hygiene supplies.

“Usually on Friday they’ll come in to get stuff to carry them through the weekend,” he said.

In another area of the school is a clothing closet filled with shirts, sweaters, coats and shoes that needy students, including those who are homeless, frequently use. School staff and community members often donate clothing and food, Esqueda said.

“The staff and community members out here really want to see these kids excel,” he said. “We always try to offer help. Teachers, counselors, they  will go to the end out here to help.”

There’s a similar effort in Wapato, and both districts receive donated backpacks filled with supplies for needy students.

Recently, the Wapato School District was able to use some of the homeless funding it gets to provide shoes and coats to a family, Bergevin said.

“So we do the best that we can to keep their lives stable as possible and keep them in school,” she said.

Underway now in White Swan is an effort to establish a drop-in center for youths similar to Rod’s House in Yakima, which connects youths to service providers.

“That would be the biggest dream, to get a Rod’s House out here,” Esqueda said.

Rod’s House director Josh Jackson has been meeting with school officials about the possibility. The youth drop-in center was initiated by the Yakima School District, and having the Mt. Adams School District  behind a similar effort helps, he said.

“We’ll share anything we’ve learned and be an open book if that’s something the community is rallying around,” Jackson  said.

Although there are fewer students overall in the Lower Valley, more of them are homeless than in the Upper Valley where most services are located, according to state Office of the Superintendent of Public Instruction data.

Reservation school districts aren’t the only ones in the rural Lower Valley with homelessness rates well above the state average.

During the 2015-16 school year, Mabton’s homeless student rate was 9 percent, Sunnyside’s was 7.2 percent and Grandview’s reached 4.9 percent, the data shows.

Homelessness isn't just a problem among adults in urban areas.

Megan Rapinoe to receive Presidential Medal of Freedom next week

Yakima Council will take another look at nominating committee makeup