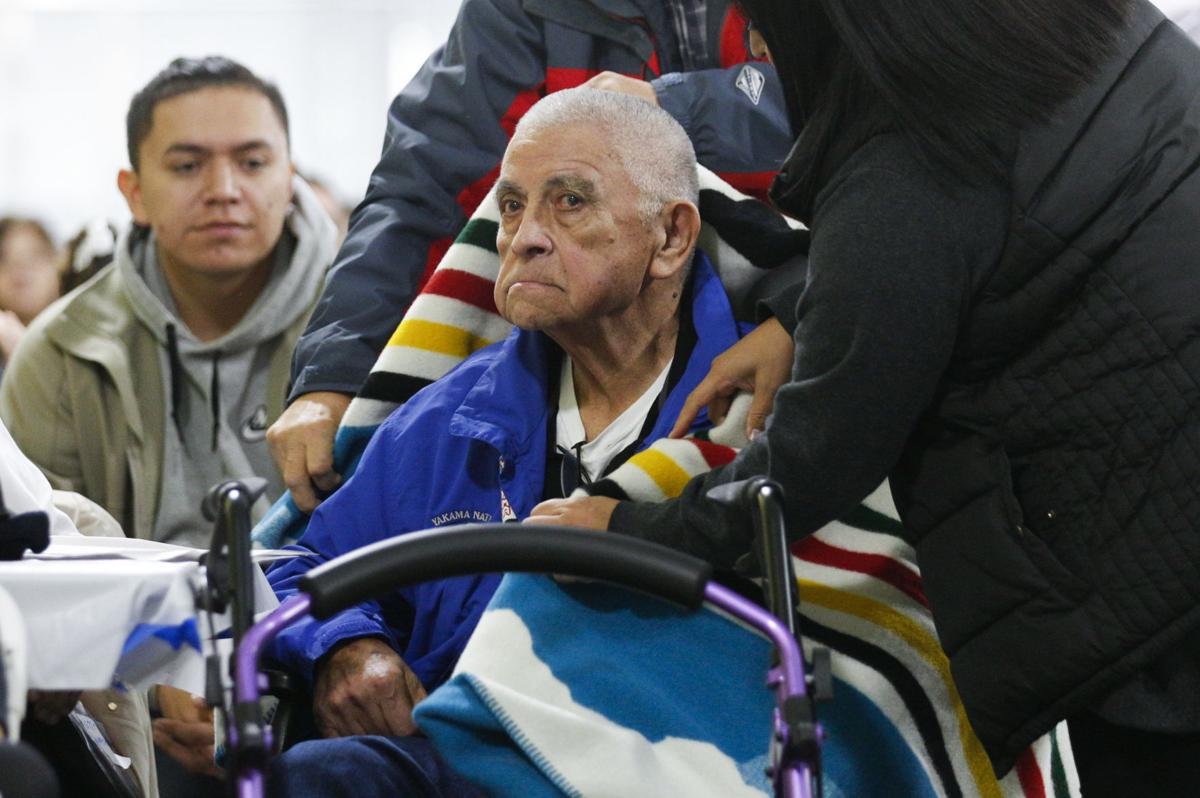 In this file photo from Friday, Nov. 22, 2019, Melvin Sampson receives a blanket as a gift during an open house unveiling of the Melvin R. Sampson Coho Facility in Ellensburg, Wash. 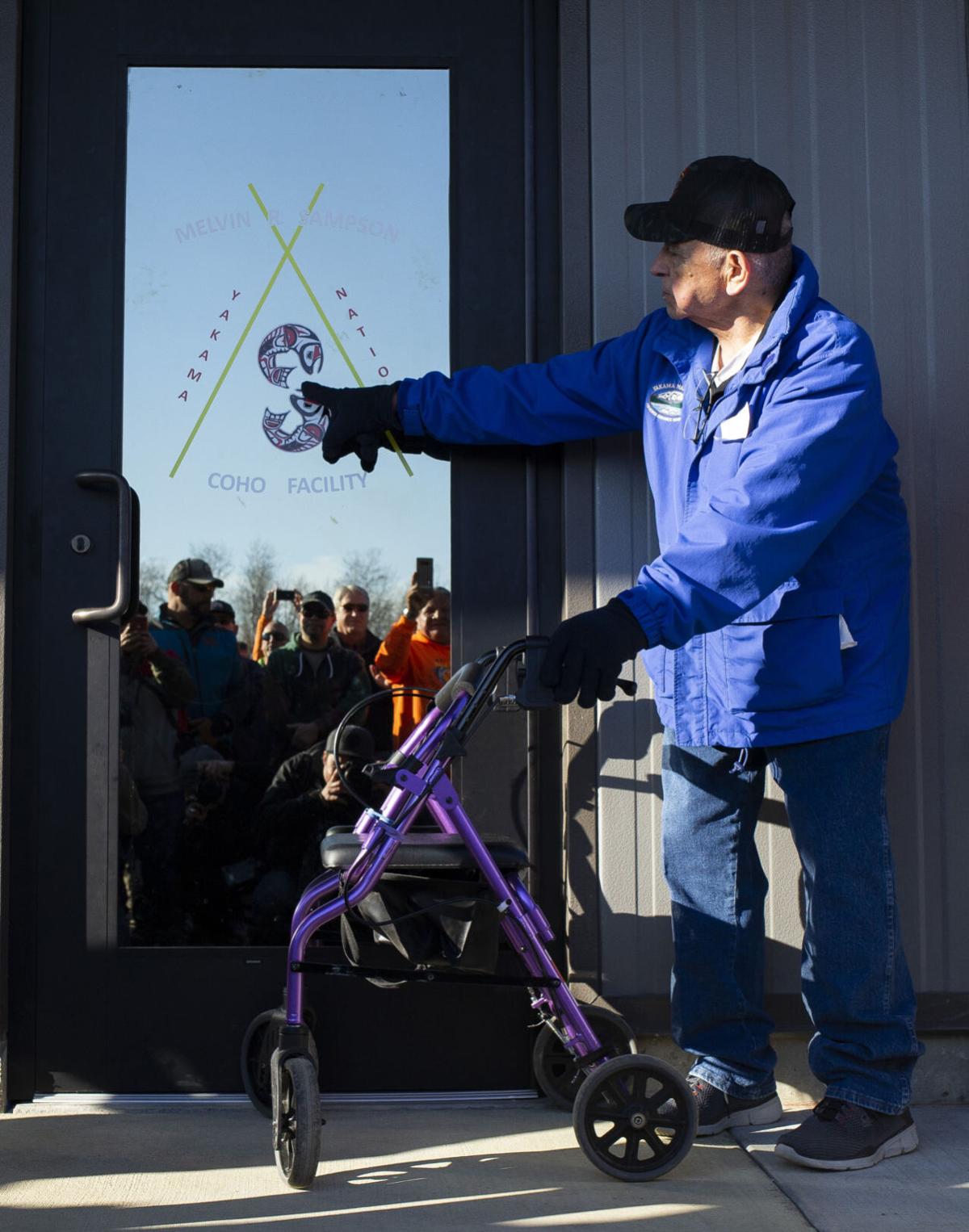 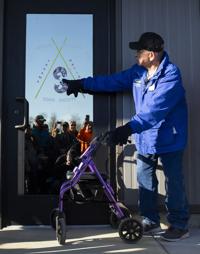 In this file photo from Friday, Nov. 22, 2019, Melvin Sampson points to the logo of the Melvin R. Sampson Coho Facility after unveiling it at an open house in Ellensburg, Wash. The logo is the same as the brand Sampson used to use for his cattle when he was a cattleman.

In this file photo from Friday, Nov. 22, 2019, Melvin Sampson receives a blanket as a gift during an open house unveiling of the Melvin R. Sampson Coho Facility in Ellensburg, Wash.

In this file photo from Friday, Nov. 22, 2019, Melvin Sampson points to the logo of the Melvin R. Sampson Coho Facility after unveiling it at an open house in Ellensburg, Wash. The logo is the same as the brand Sampson used to use for his cattle when he was a cattleman.

Melvin Roger Sampson will forever be regarded as a leader among leaders who fought for the betterment of indigenous people across the country, Yakama leaders say.

Sampson — a longtime former tribal councilman — was the driving force behind establishing the Indian National Finals Rodeo, improvements in health care for Native Americans nationwide and the construction of the Yakama Nation Indian Health Services clinic west of Toppenish. He also pushed for improved fish restoration in the Yakima and Columbia basins.

“He’s bigger than the Yakama Nation,” said Yakama General Council Chairman Roger Fiander, who grew up with Sampson. “Besides that, he was my roping partner.”

Sampson died at home Dec. 11. He was 82. He leaves behind his wife of 54 years, Betty Jean, four adult daughters and numerous grandchildren and great-grandchildren.

Sampson was laid to rest Thursday morning at Reservation Memorial Park west of Wapato, on the Yakama reservation.

But his memory and efforts to move forward projects and policy key to preserving tribal culture and hope for youths will live on, tribal leaders and former leaders said Wednesday.

“I would just say we celebrate his life and what he’s done for us,” said Phil Rigdon, superintendent of the tribe’s Department of Natural Resources. “The years of being chairman, and work he did for Indian Health Services and what he did to move us to restore fish in ways we had never imagined.”

Sampson grew up in White Swan and often traveled to the Columbia River to fish at Celilo Falls with Irving Pinkham, another childhood friend.

Pinkham said he and Sampson fished at Celilo well before the roar of the falls were silenced by The Dalles Dam in 1957.

Salmon were abundant and it was common to pluck 80-pounders from the rushing river, Pinkham said.

“When we were young, we could have walked across the river on the backs of salmon,” he said.

“We were awfully competitive as kids,” Pinkham said. “Every time White Swan would lose, I’d call him up and ask, ‘What was the score in the White Swan game last night?’ Of course, I knew the score, but I’d just egg him on.”

When they graduated in 1956, they joined the U.S. Army. Pinkham said it was by accident.

They went down to the Selective Service office, and a woman there gave them paperwork to fill out.

“So she gave us some papers to sign and she said she’d get us our notice in about 10 days,” Pinkham said. “We didn’t know what kind of notice we were getting.”

Pinkham said a month later Sampson and his mother came to his house and asked if he was ready to go.

Pinkham said he didn’t think too much of it — he always went wherever Sampson went.

“We were just like brothers all our lives. We were always together when we were kids,” he said.

They were separated in the service after being questioned in Seattle, Pinkham said.

“They asked us, ‘Did any of your people fight against the United States?’ ” Pinkham recalled. “We both raised our hands because our grandparents were both in the war.”

Pinkham is half Nez Perce and his family fought in the conflict between Chief Joseph and U.S. soldiers.

Sampson had family who fought in the Yakama War.

“All our grandparents in them days were warriors,” Pinkham said. “They fought in the wars.”

Both men were honorably discharged after a two-year stint, he said.

“He got discharged I think 90 days before I did,” Pinkham said.

Sampson went on to become the human resource director for Mt. Adams Furniture Factory — a tribal enterprise — before being elected to the Tribal Council, where he served 18 years.

Sampson was among a group of nine close friends in White Swan, most of them rodeo buffs, Fiander said.

But that didn’t keep Sampson from the rodeo arena as he eventually took to team roping.

“He made himself a cowboy, and he was very good at it,” Fiander said.

Sampson wanted to provide a national event for Native American competitors and led the way for the formation of the Indian National Finals Rodeo in 1976.

“That started in Mel’s office, at Mel’s desk,” Fiander said.

Sampson had hired Jack Edmo, also a rodeo competitor, to work in the tribe’s planning department and the two began planning a national competition, Fiander said.

“They began talking about offering something for youth,” he said.

In 2011, Sampson was inducted into the INFR hall of fame.

Washines said Sampson supported all youth activities and sporting events and was instrumental in seeing a scholarship program run by the Bureau of Indian Affairs transferred to Yakama administration.

That brought scholarship opportunity closer to tribal youths, he said.

Sampson also helped see the administration of other federally funded programs moved to local tribal administration, with the most notable being health services.

“He was in all facets of our tribe,” Washines said.

He also was instrumental in the formation of the Portland Area Indian Health Board, which oversees federal administration of Indian health services in Idaho, Oregon and Washington.

Sampson didn’t hesitate to begin shifting operation and management of health and other service programs to the local tribal level when Congress adopted the Indian Education and Self Determination Act of 1975, said Phillip Ambrose, who at the time served as administrator of grants and contracts for the tribe.

“This was an opportunity to allow the Yakama Nation to better meet the local health needs of the Yakama members rather than relying on a federal cookie-cutter model that was not responsive to the health status of Yakama members,” he said.

The federal government in the 1855 treaty promised the Yakamas a hospital. That didn’t happen.

The tribe had a little clinic houses in small brick building on the southeast side of the tribe’s government campus.

Sampson led a lobbying effort in Washington, D.C., to secure funding to build the Indian Health Clinic west of Toppenish. Later, his continued drive led to the 8,000-square-foot clinic’s expansion into a more than 80,000-square-foot facility.

“Melvin has left a national legacy for successful Indian health programs and an enduring structure that continues today,” Ambrose said.

Sampson helped lead the way for improved fish rearing practices in the Yakama and Columbia basins. He served as director of the tribe’s fisheries.

Under his leadership, the Yakama Nation acquired operations of the Klickitat Hatchery on the Klickitat River outside of Glendale in Klickitat County.

When the state Department of Fish and Wildlife handed off operations of the hatchery, officials said the Yakamas had superior fish rearing practices.

Washines said Sampson knew how to build teams to get projects done.

George Waters, a lobbyist for the tribe in Washington, D.C., said Sampson was probably the best tribal chairmen he’d ever met.

“And I’ve been representing tribes for 40 years,” he said.

He understood his tribal culture and government as well as state and federal government. One day he’s mixing with rodeo buffs and the next leading the charge on improving health services, Waters said.

“He’s just sort of an example of someone who could operate in different worlds,” he said.

Waters said he often got calls at 8 in the morning from Sampson during efforts to secure funding for the health clinic.

Fiander and Pinkham said Sampson was always the leader of the group growing up.

Fiander recalled when his dad would give him money for a haircut.

“Well, I’d split that money with Melvin and he’d give me a haircut,” Fiander said with a laugh.

Sampson taught himself to do leather work and made a shop in his basement. He made saddle pads, spurs, spur straps and bridle collars, Fiander said.

Pinkham said Sampson cared for all people and his efforts weren’t solely to benefit indigenous people.

“In our way, nobody is better than anyone else and that’s what he believed too,” Pinkham said.

Pinkham said Sampston was always a forward-thinking person and said his poise in seeing through fish and habitat restoration projects extended from his years of fishing when he was young.

His efforts in fish restoration, improving health services and other programs benefited people throughout the Northwest — tribal and nontribal people alike, Pinkham said.

“His life doesn’t just belong to his family,” he said. “His life belongs to Washington state, Idaho, Oregon, Alaska — that’s where his life belongs. That’s all the places he helped. All these people, they know what he did.”