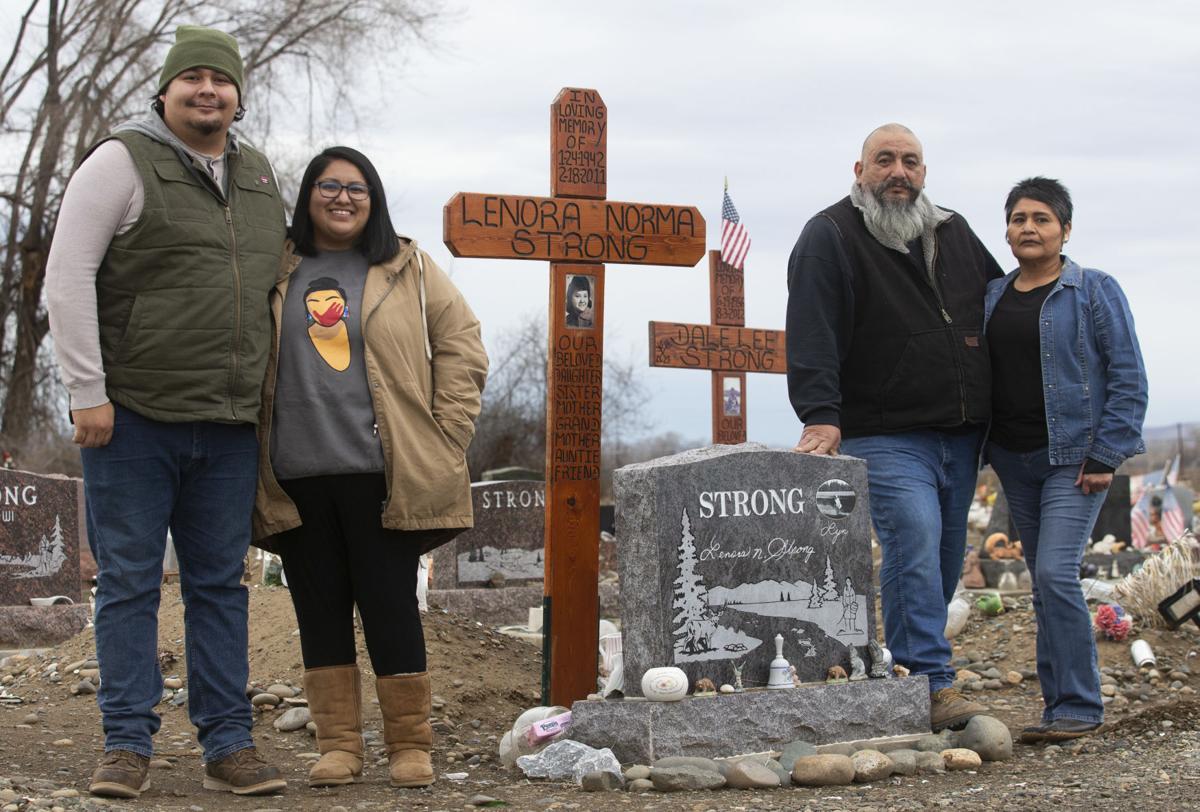 Rick Dominguez and his wife Sonya Dominguez, right, stand opposite of their daughter Chestina Dominguez and her husband Ezra Salinas among wooden crosses made by Rick on Saturday, Dec. 19, 2020, at McCoy Cemetery Saturday near Toppenish, Wash. 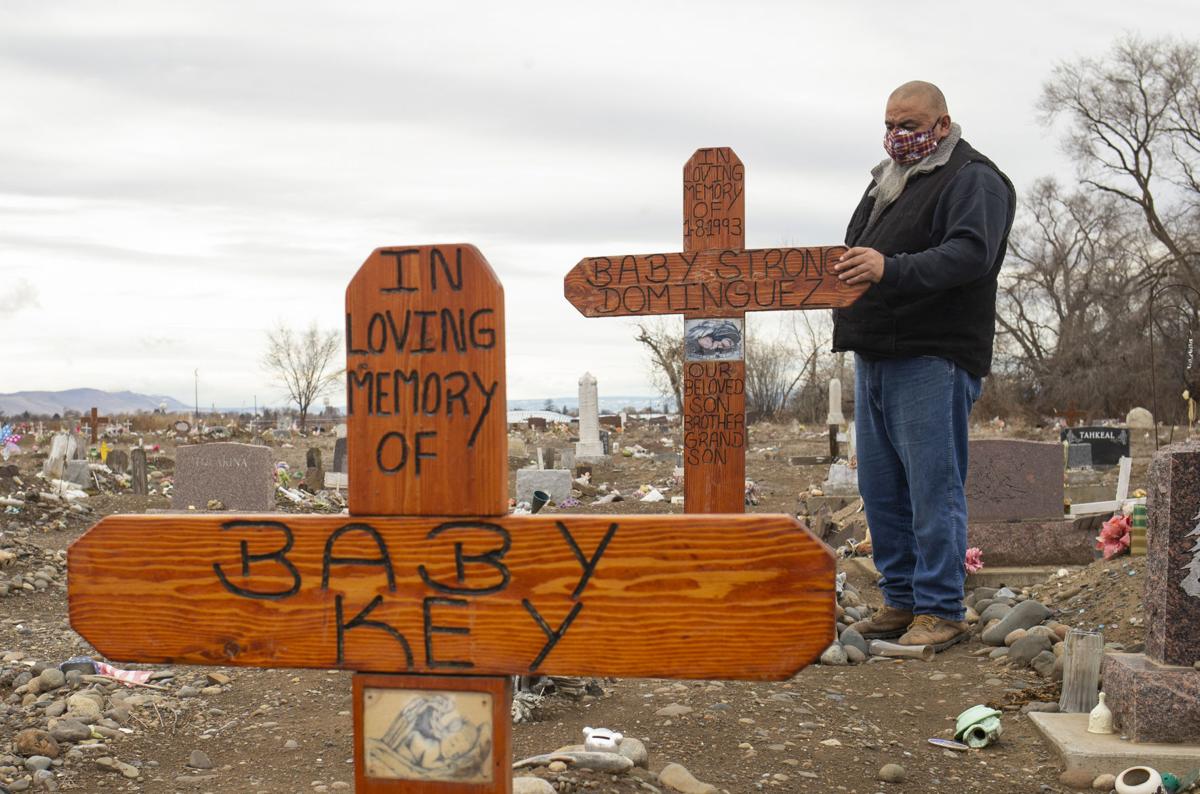 Rick Dominguez visits his son's grave, which is marked with a wooden cross he made, surrounded by other wooden crosses that mark the graves of his wife's family members Saturday, Dec. 19, 2020, at McCoy Cemetery near Toppenish, Wash. Dominguez estimates he's made and donated more than 200 wooden crosses since 2017. 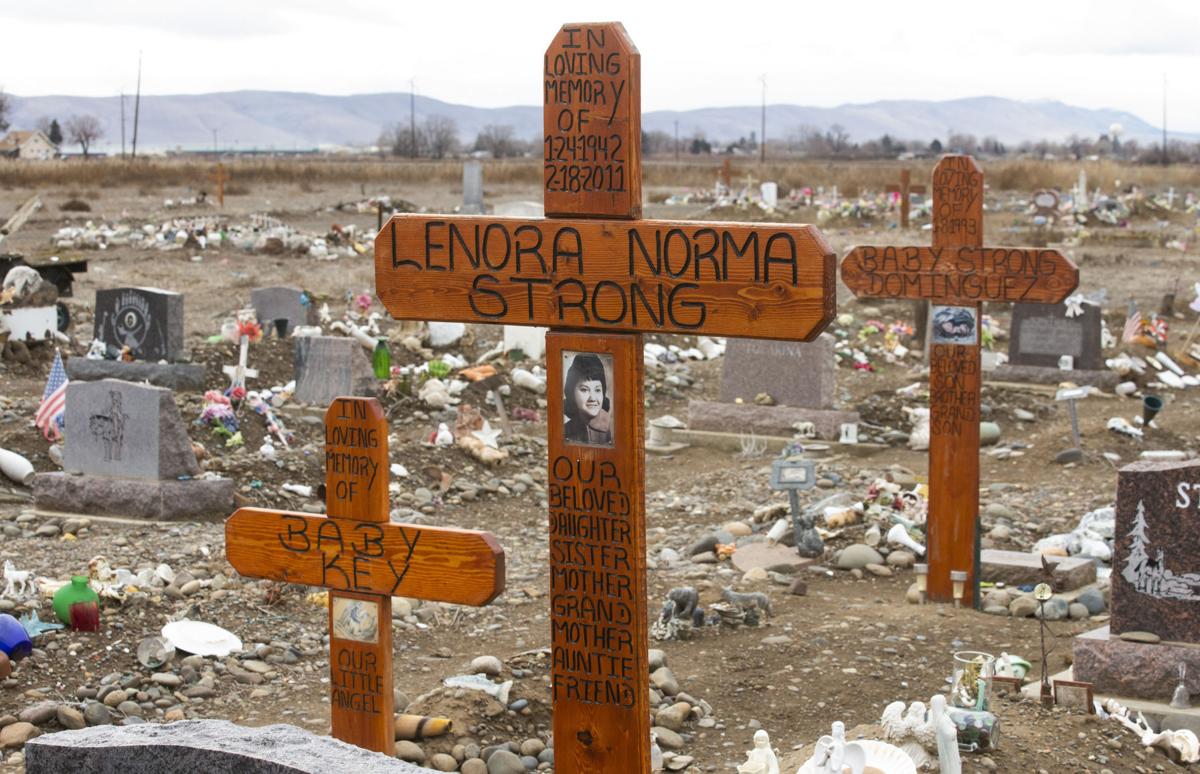 Wooden crosses made by Rick Dominguez mark the graves of his wife Sonya's cousin (left), mother (center) and their son at McCoy Cemetery on Saturday, Dec. 19, 2020, near Toppenish, Wash.

Rick Dominguez and his wife Sonya Dominguez, right, stand opposite of their daughter Chestina Dominguez and her husband Ezra Salinas among wooden crosses made by Rick on Saturday, Dec. 19, 2020, at McCoy Cemetery Saturday near Toppenish, Wash.

Rick Dominguez visits his son's grave, which is marked with a wooden cross he made, surrounded by other wooden crosses that mark the graves of his wife's family members Saturday, Dec. 19, 2020, at McCoy Cemetery near Toppenish, Wash. Dominguez estimates he's made and donated more than 200 wooden crosses since 2017.

Wooden crosses made by Rick Dominguez mark the graves of his wife Sonya's cousin (left), mother (center) and their son at McCoy Cemetery on Saturday, Dec. 19, 2020, near Toppenish, Wash.

The death of Rick Dominguez’s younger brother, Leonardo Diaz, in late March was a terrible loss. Rick thought about halting his tradition of making wooden memorial crosses for Yakama Nation tribal citizens and others.

He had crafted dozens of crosses since 2017, with the first for his good friend and softball teammate, Ross “Bub” Sohappy Jr. Rick and his wife, Sonya, have lost track of how many crosses he’s made, but they estimate at least 200.

The more he thought about it, Rick realized he should continue. The crosses he made meant so much to the families.

“If you have a gift, share it with the people,” he said.

All around the Yakama Reservation, people call him the Cross Man. Rick has made more than 30 crosses for the tribal cemetery on Ahtanum Ridge near Union Gap, and several stand at McCoy Cemetery outside Toppenish. Most of his distinctive crosses are at tribal cemeteries in Washington, Oregon and Idaho, along with more in Arizona, California and Canada.

He made a memorial cross for Jon Cleary and Josiah “Jo” Hilderbrand, two California men who were murdered in early June 2019 while driving through Yakima County. He made a cross for use in an emotional short film, “Kuthla,” which dramatizes the staggering impact of COVID-19 on Indian Country.

Rick doesn’t promote himself; he is humble and would rather avoid attention. People often learn of his generosity through word of mouth. He and Sonya also leave cards at longhouses, Indian Shaker churches and other places where people in need may see them.

As the coronavirus and other causes of death take tribal citizens of all ages, their loved ones reach out to the Cross Man for his loving art. Retired from construction, Rick works on the crosses as much as he can. Health issues impact his efforts, and the demand can be overwhelming.

And so it has become even more of a family effort in the last few months. Their daughter, Chestina Salinas, and her now-husband — she married longtime companion Ezra Salinas on Christmas Day — started helping at Saturday cross settings. Sonya bought a laminator and a copier to create the attached weatherproof portraits, and Rick is going to teach her some aspects of making the crosses.

They do all this with wood donated by Yakama Forest Products and varnish and other materials purchased with donations; the family doesn’t charge for the crosses. Some people can’t afford headstones, making a cross even more precious. Their loved one is honored and won’t be forgotten.

And once a cross is up, that isn’t the end of their care. “Every time we go to a cemetery, I try to keep up on them, touch them up,” he said.

Grieving and giving back

Rick and Sonya met as juniors in high school, at a summer Upward Bound program in Yakima, and married young. He grew up in Mabton, she in the Satus area, attending Granger High School, a big Mabton rival. They still laugh about that. If not for Upward Bound, they may not have been together for 37 years now.

He came from a big blended family of 21 siblings. Sonya’s grandma and grandpa, James and Margaret Nelson Strong, helped raise her because her mom, Lenora Norma Strong, was a single mother, Sonya said. Sonya grew up in the Shaker Indian Church and the traditional Washat religion while learning Yakama ways. As an adult she took care of her grandparents, and she and Rick are helping raise their four grandchildren.

Rick isn’t enrolled Yakama but is a tribal relative through marriage and respects and honors his wife’s traditions. His steadfastness in supporting what she learned from her elders helped through some of their hardest times together.

On Jan. 8, 1993, one of their sons was stillborn. In her deep sorrow, Sonya couldn’t braid her childrens’ hair, lest that emotion transfer to them through her hands. She couldn’t fix their food for the same reason. And so for a time, Rick’s hands filled the roles of hers.

“It was really hard when we lost” him, Sonya said recently, as they stood near their son’s grave at McCoy Cemetery. “It took me a long time to come out here.”

Rick made a cross for their son. It stands over a small flat granite stone and says, “In Loving Memory of Baby Strong Dominguez. Our beloved son, brother, grandson.” His grave, mounded with white rocks, features items a little boy would love — small animal figurines and toys, a box of Peeps.

In the memorial honoring the two California men on Sept. 3, Sonya spoke of losing their son. Nearby stood Rick and Brad Goudy, who helped set the cross just east of US Highway 97 near milepost 52, and Caroline Looney and Doris and George Strong, spiritual leaders who guided the ceremony. They are also Sonya’s aunt and uncle, and she appreciated them being there.

In the time between that day and the Memorial Day weekend, in the weeks when COVID-19 deaths surged in Yakima County, as they are again, Rick had made 38 crosses.

He also makes them for people who have not yet been laid to rest. Rick created one for Rosenda Sophia Strong, who went missing on Oct. 2, 2018. Her remains were found July 4, 2019 and her death has been ruled a homicide.

Strong’s remains haven’t been released to her family, as the FBI investigation continues. Her sister, Cissy Strong Reyes, will have her sister buried next to their mother on the Umatilla Reservation. Rick and Sonya, who are family, will care for Rosenda’s cross until Cissy can bring her home.

“I am grateful they thought of Rosenda when I didn’t even know they were the ones making them,” Reyes said of Rick and Sonya. “We are so honored Rosenda got a handmade cross made with love and blessings and prayers.”

Held in high regard

Before Rick starts cutting and carving the wood, “I pray over the cross and ask Creator to guide my hand,” he said. All are freehand and sizes vary, from shorter crosses for small memorials to crosses about 5 feet and 6 feet tall.

Rick smooths the planks for the crosses, then softens the edges and carves the letters and numbers with a router. He chars some to bring out the grain, adding to their natural beauty, and seals them with a gloss to protect them from the elements. He needs good ventilation for the crosses to dry. Winter slows his efforts; in ideal conditions, Rick has made five or six crosses a week.

Because of an injury, Rick had retired early after 25 years in construction. When Bub Sohappy died, he had time and some wood and an old router. Thus began his heartfelt work, which brings comfort to families and helps them heal.

“The Creator just gave me a gift so I started doing it,” he said. “I think the hardest ones I have to do are for a child.”

Rick was working on a new cross for his friend Oct. 21 when a convoy of Yakama tribal leaders and officials arrived at the couple’s house. Sonya, who works at Yakama Nation archives in Wapato, had come home for lunch and a wonderful surprise.

The tiny house was constructed through a project by White Swan High School students Lisa Olney and Lateet Olney, Washines wrote. They followed plans used by others who built the structures for tribal homeless, but it could not be used for that. So Yakama officials decided to give it to Rick and Sonya, who sincerely appreciate it.

“That’s why I give thanks to the Yakama Nation and Yakama Forest Products. They help us out quite a bit,” Rick said.

With some gentle encouragement from his family, Rick has learned to accept such generous gifts. People would offer money and he’d decline it, Sonya said. They urged him to take the donations; if he didn’t, he was blocking their blessing, they reminded him.

“I just do it for the people. It brings tears to my eyes when I drive up to a cemetery and see all the crosses,” he said. “I’ll do it till I can’t do it anymore.”

One day he’ll hand over the ropes of making crosses, Rick said. Chestina wants to learn. As a Heritage University student pursing a bachelor’s degree in social work and a full-time employee of Yakama Nation Behavioral Health, she’s quite busy. She has two more semesters to go so plans to keep helping with Saturday cross-settings until she has more time to start making crosses.

Everyone’s involved in some way. Younger brothers Cruz and Richard Dominguez and sister Sheanesha Dominguez help buy supplies, give money as needed and offer other support. Rick and Sonya also appreciate Joel De La Torre, an owner of the Bella Brew coffee shop in Wapato; he has given them hundreds of cans, which they cash in to buy supplies.

Chestina worries about her parents as word has spread and more people want crosses. Some request multiple crosses, and she knows her dad will want to make all of them. His health issues — some of which linger from his construction days — and the continuing pandemic have made her even more protective, and she occasionally reminds people on social media that her parents do this work out of the kindness of their hearts.

“I wish I could put them in a bubble. A lot of friends” have lost parents and relatives to COVID-19, Chestina said.

Saturdays are emotional when she and Ezra help set crosses with her parents. She enjoys learning from them and being with families then, but it is hard. She cries as families talk about their loved ones.

Those stories, while mostly somber, sometimes veer into lighter recollections of the person who has passed. Some prompt smiles and laughter as relatives remember good times with their family member. “That’s good medicine. This is medicine for me,” Rick said.

In normal holiday seasons, Rick also volunteers as a Native Santa Claus, with braids and moccasins. That delights everyone from tiny children to elders. It’s another way he gives back.

“My biggest accomplishment is seeing people happy,” he said.

YAKAMA RESERVATION — The little girl stands on Toppenish Ridge, high above the Yakima Valley, before the camera pans closer to show her at a w…