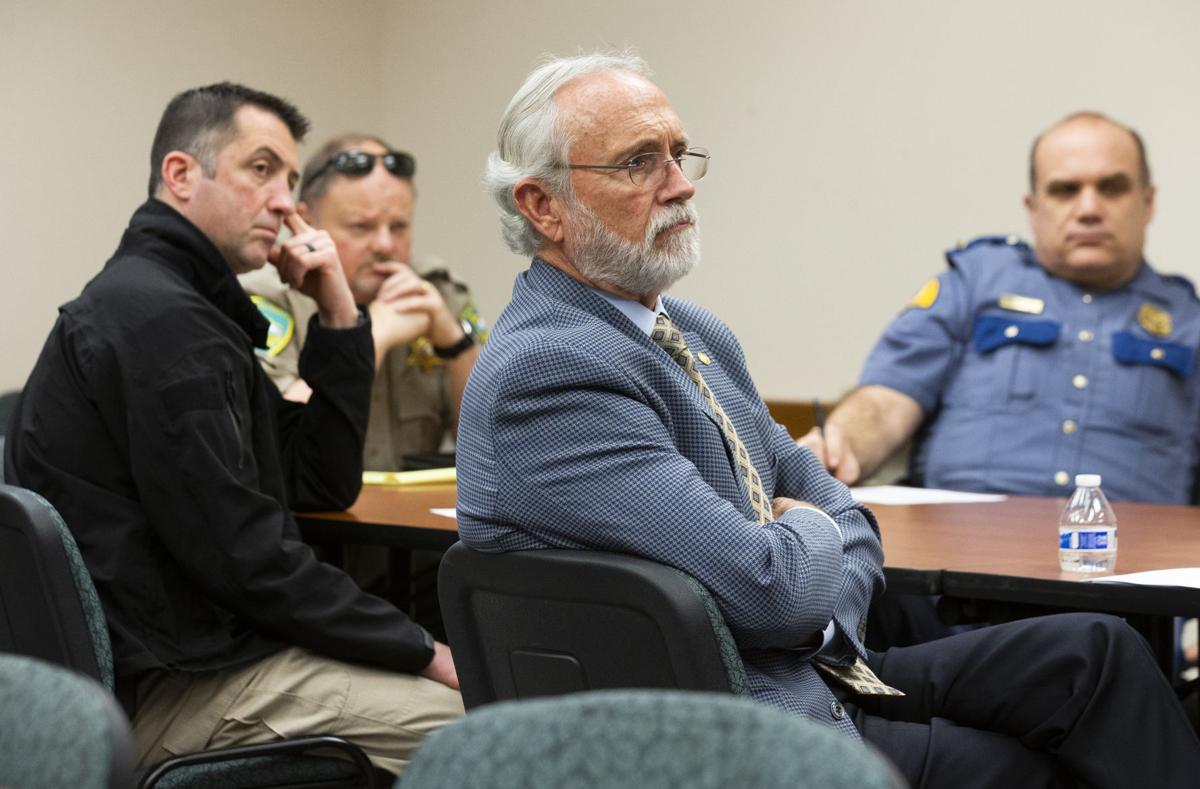 FILE — U.S. Rep. Dan Newhouse, center, listens to someone speak during a roundtable discussion with local law enforcement about missing and murdered indigenous women on Wednesday, Feb. 19, 2020, at the Yakima Chamber of Commerce in Yakima, Wash. 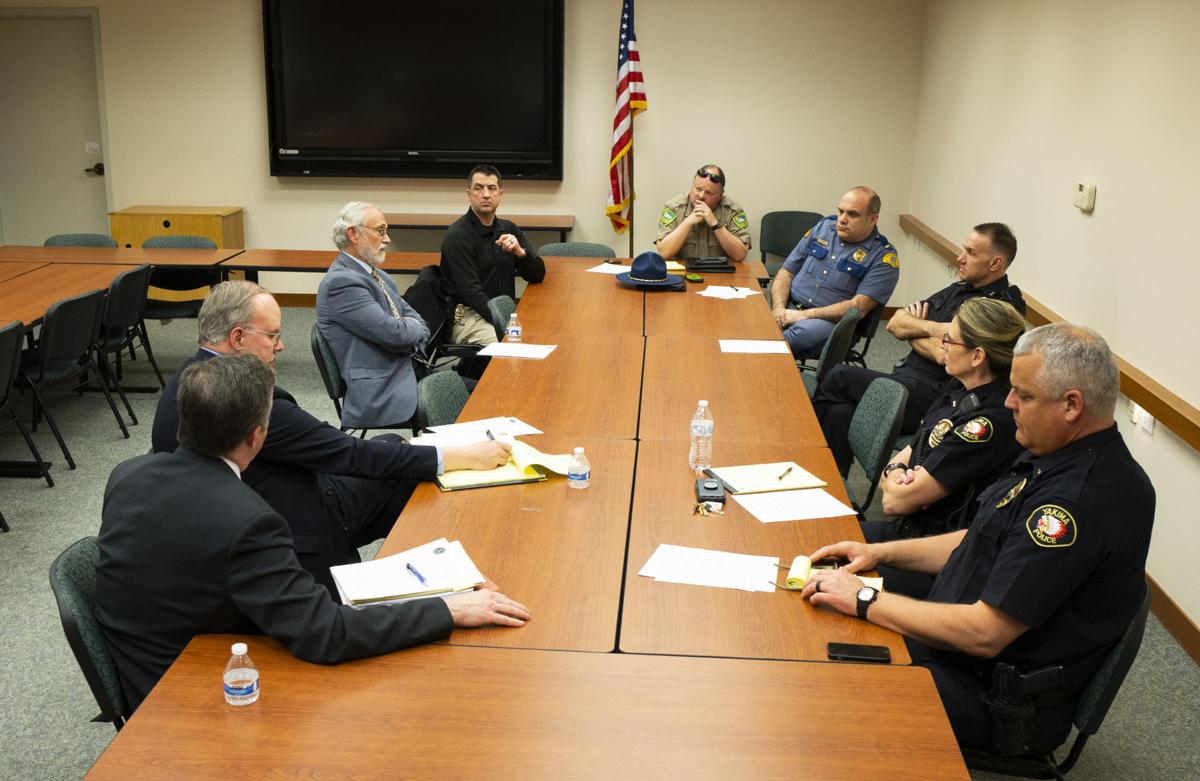 Representatives from local law enforcement agencies meet with U.S. Rep. Dan Newhouse during a roundtable discussion about missing and murdered indigenous women on Wednesday, Feb. 19, 2020, at the Yakima Chamber of Commerce in Yakima, Wash.

FILE — U.S. Rep. Dan Newhouse, center, listens to someone speak during a roundtable discussion with local law enforcement about missing and murdered indigenous women on Wednesday, Feb. 19, 2020, at the Yakima Chamber of Commerce in Yakima, Wash.

Representatives from local law enforcement agencies meet with U.S. Rep. Dan Newhouse during a roundtable discussion about missing and murdered indigenous women on Wednesday, Feb. 19, 2020, at the Yakima Chamber of Commerce in Yakima, Wash.

A new tribal and federal public safety effort in White Swan is not specifically related to the crisis of missing and murdered indigenous women and men, but authorities say it should help address the issue.

The effort is the Marshal Service’s initial long-term operation with the Yakama Nation and involves its first police officer appointed to the Pacific Northwest Violent Offender Task Force, Fleck said.

After a swearing-in expected later this month, Fleck said the office should be operational by this summer.

“I can’t say what the staffing situation is going to be right now because there are several funding streams that have to put into place first,” Fleck said. “It won’t be 24/7 in the first year at least, but we will identify hours. We want to be there for the community.”

Wednesday’s gathering at the Greater Yakima Chamber of Commerce gave Newhouse more information about the challenges facing local, tribal, federal and state law enforcement agencies when it comes to missing and murdered indigenous women and men. Much of Newhouse’s legislation related to the issue has a law enforcement focus, so he wanted their feedback and suggestions.

“Tell me what would be helpful in this issue to make some progress and find some solutions. Help me in moving forward with this,” said Newhouse, who organized meetings in Toppenish and Yakima to hear from tribal leaders and citizens and relatives of missing and murdered indigenous women and men.

He plans another meeting in Yakima, this one public, from 4 to 7 p.m. April 9 in the Perry Technical Institute auditorium.

Each officer offered suggestions Wednesday, most stressing the need for communication and cooperation among law enforcement agencies. Building trust and sharing information is key, they said. Specifically, Carl Hendrickson, chief criminal deputy for the Yakima County Sheriff’s Office, said it would be nice to have someone available to investigate cold cases.

Hyslop mentioned the two tribal liaison positions within the Washington State Patrol, which came as a result of 2019 legislation led by state Rep. Gina Mosbrucker, R-Goldendale. Patti Gosch was hired in late November for Western Washington, according to a news release. At the time, officials were still recruiting to fill the Eastern Washington job. Those attending Wednesday’s meeting weren’t sure if that position was filled.

Hyslop also noted the success of “Operation Invictus Civitas,” a three-month joint operation involving federal and local law enforcement with the goal of reducing violent crime in Yakima County this summer. Operation White Swan will run out of the unincorporated community’s tribal police substation and will focus on White Swan and the greater reservation area, he said.

The murders of five people June 8 sparked a discussion between the Marshals Service and the Yakama Nation about what they could do in fighting crime in and around the unincorporated Lower Valley community, Fleck said. Killed on that day were Dennis Overacker, 61; John Cagle, 59; Michelle Starnes, 51; Catherine Eneas, 49; and Thomas Hernandez, 36.

James Dean Cloud — recently indicted on first-degree murder charges — and another man, Donovan Quinn Carter Cloud, remain jailed in connection with the case and have been indicted on assault, kidnapping and carjacking charges.

The Clouds are accused of holding a gun to a teen’s head while demanding a car from his parents, according to a federal complaint. The complaint says the Clouds took the car to escape the area after the mass shooting. James Cloud is now being accused of killing at least one of the five people shot to death at a remote home off Medicine Valley Road.

Less than two months later, on Aug. 7, a beloved Yakama elder was murdered in her White Swan home. An omnibus hearing for the suspect arrested in Gail Teo’s death is set in Yakima County Superior Court next week.

Operation White Swan will be the first opportunity for the U.S. Marshal Service to establish a footprint in White Swan and work with the Yakama Nation Police Department to fight violent crime, Fleck said. The Yakama Nation officer has already been cross-commissioned him as a special Yakima County sheriff’s deputy and with the Marshals Service, he said.

This is a significant step for the Yakama Nation, Fleck added, and he praised those who worked to get it approved by tribal leaders among other required efforts on their part, along with state and federal requirements.

“Pursuing violent offenders has always been a U.S. Marshals Service initiative. ... We try as much as we can to go to the place where violent crime has the biggest community impact,” Fleck said.

“When you look around the Eastern District of Washington, one of those areas that has the potential for us to make an impact is the reservation.”